Saskia te Nicklin / the garden, some leftovers and us swaying 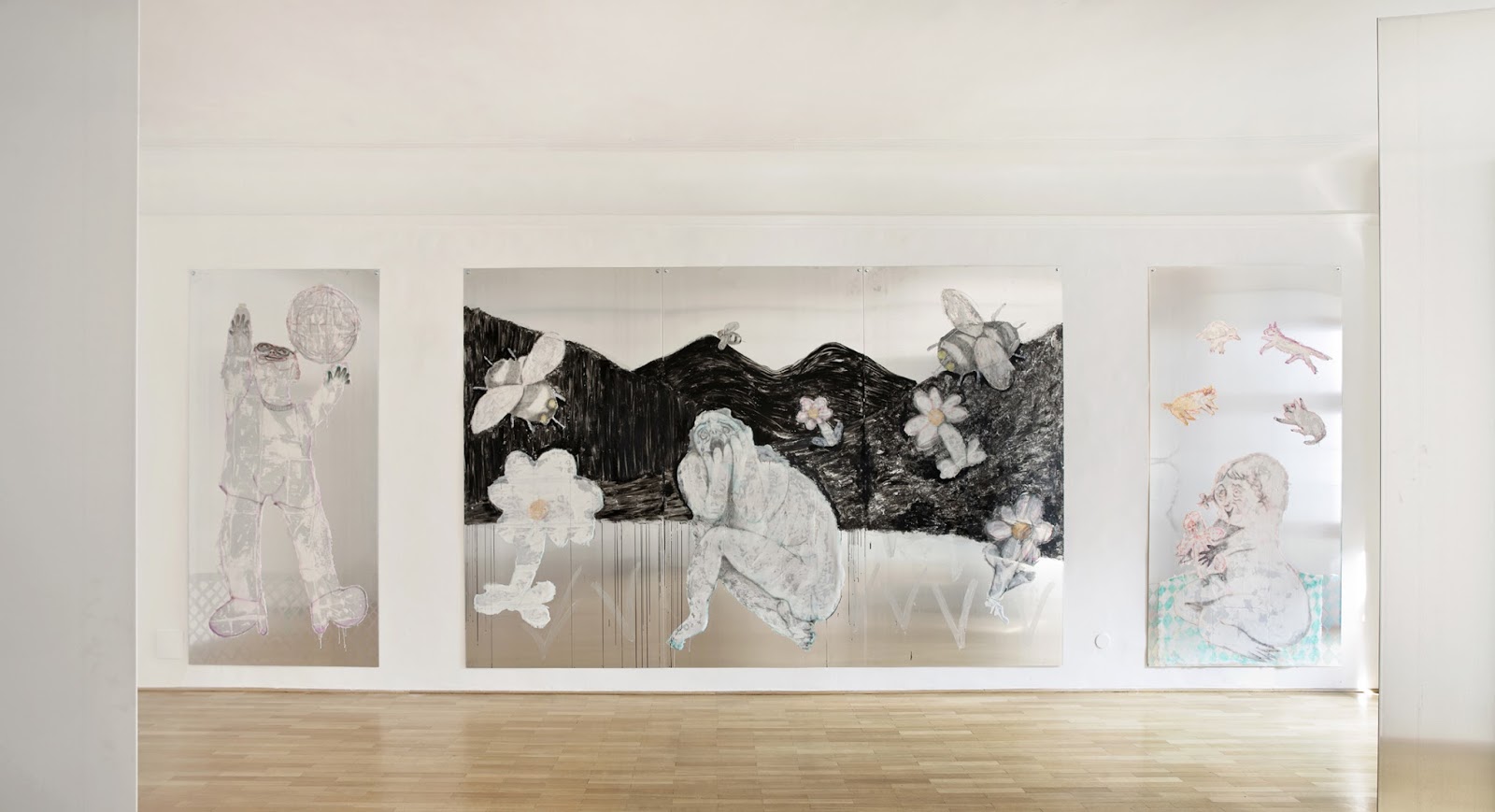 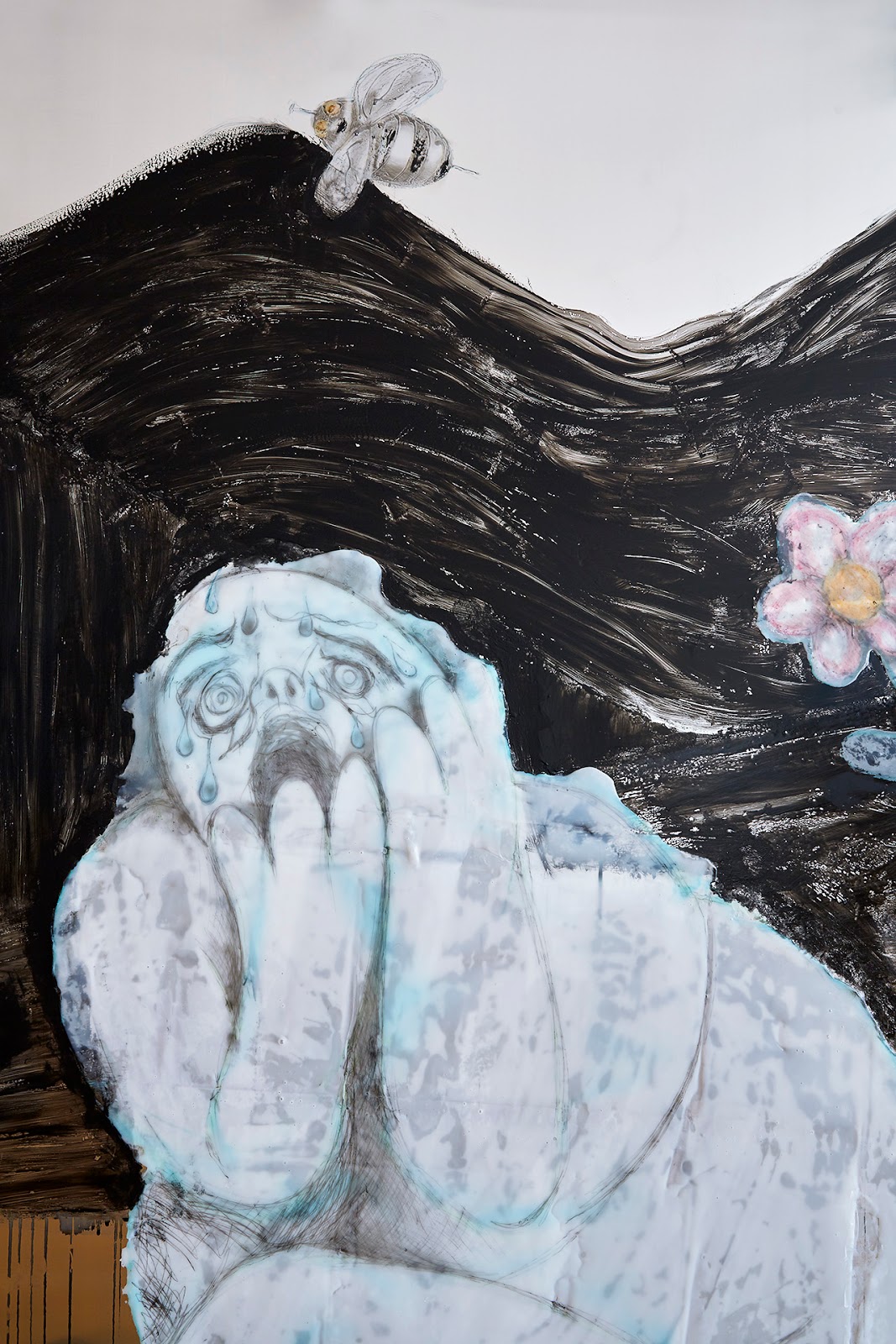 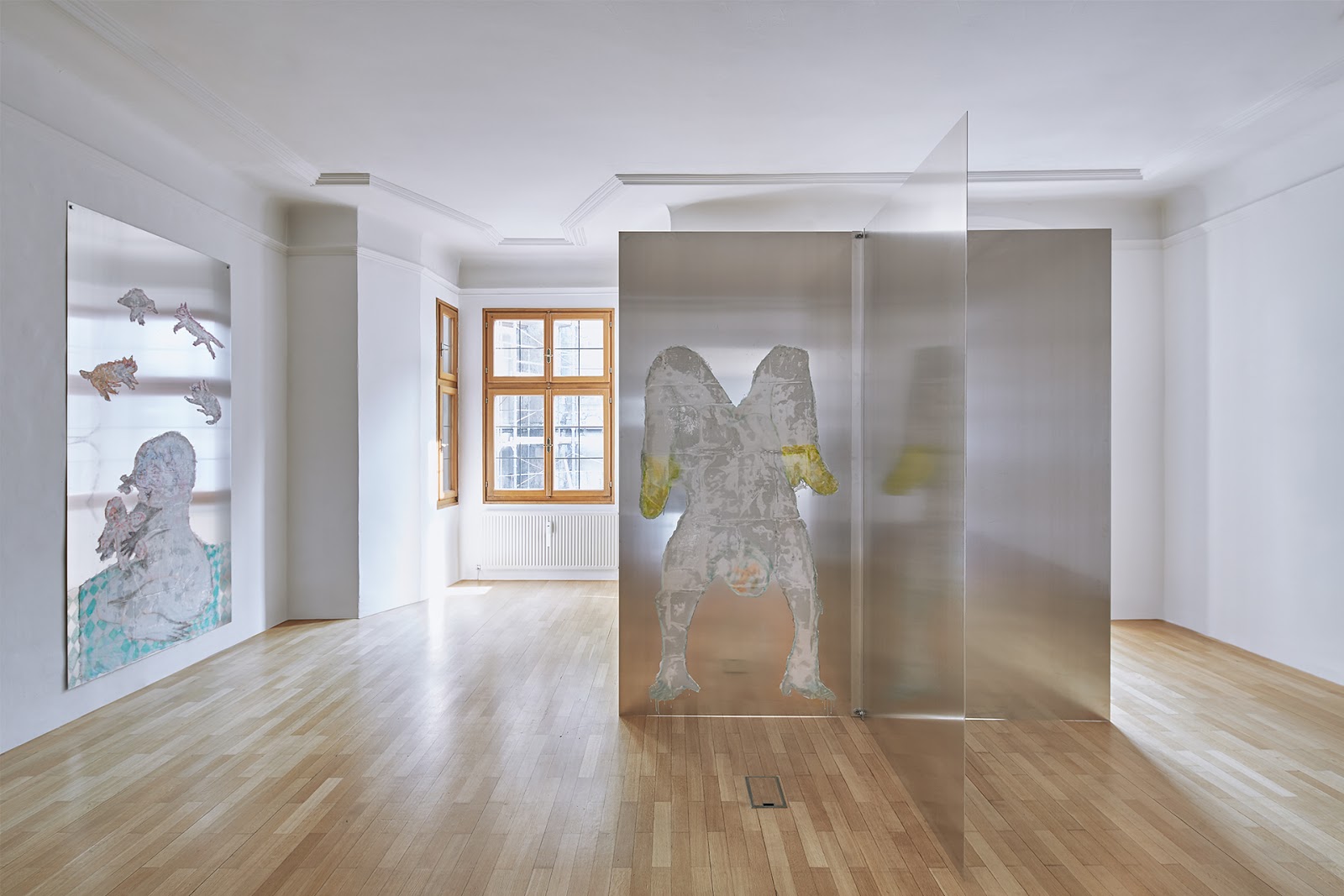 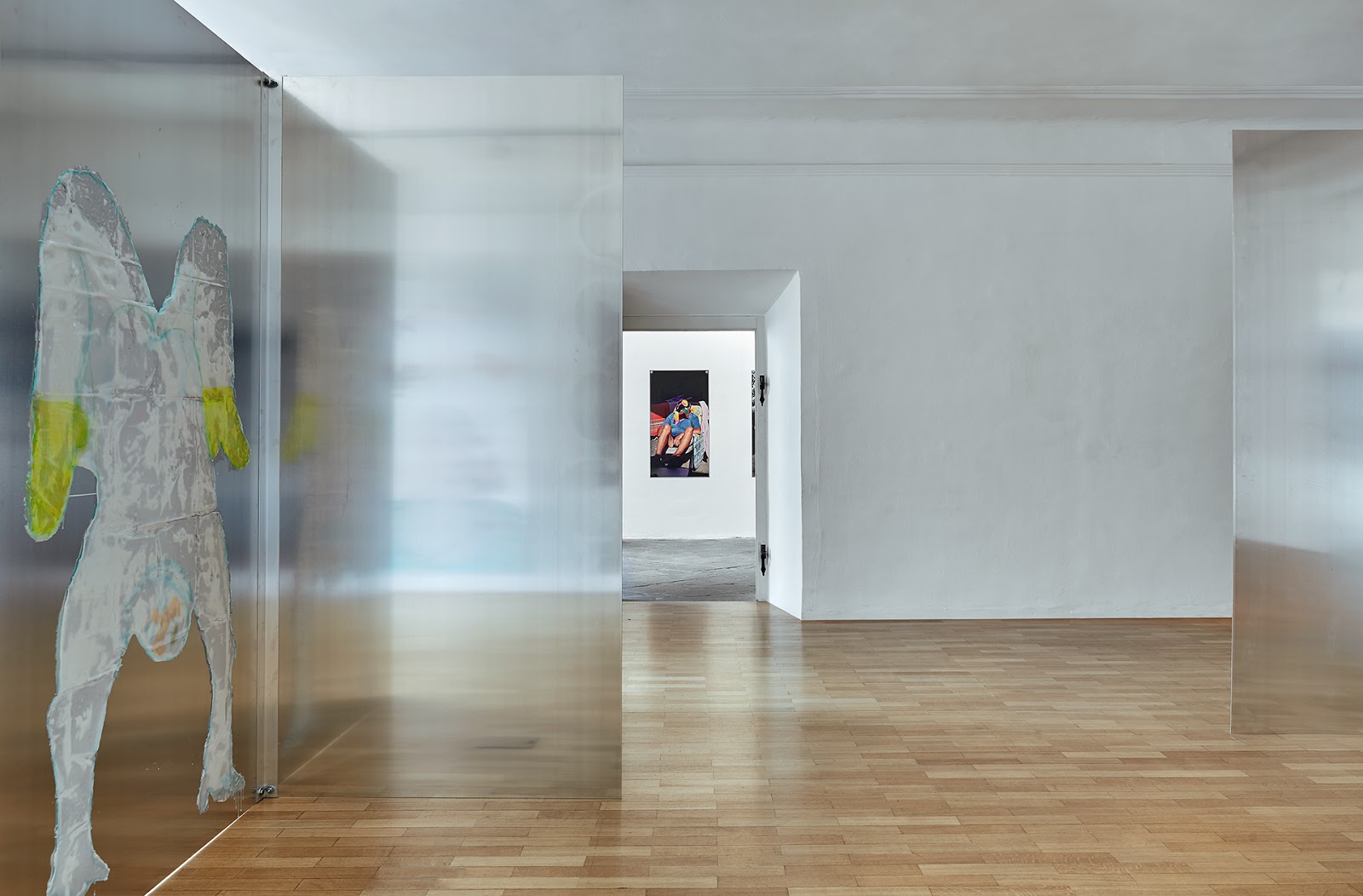 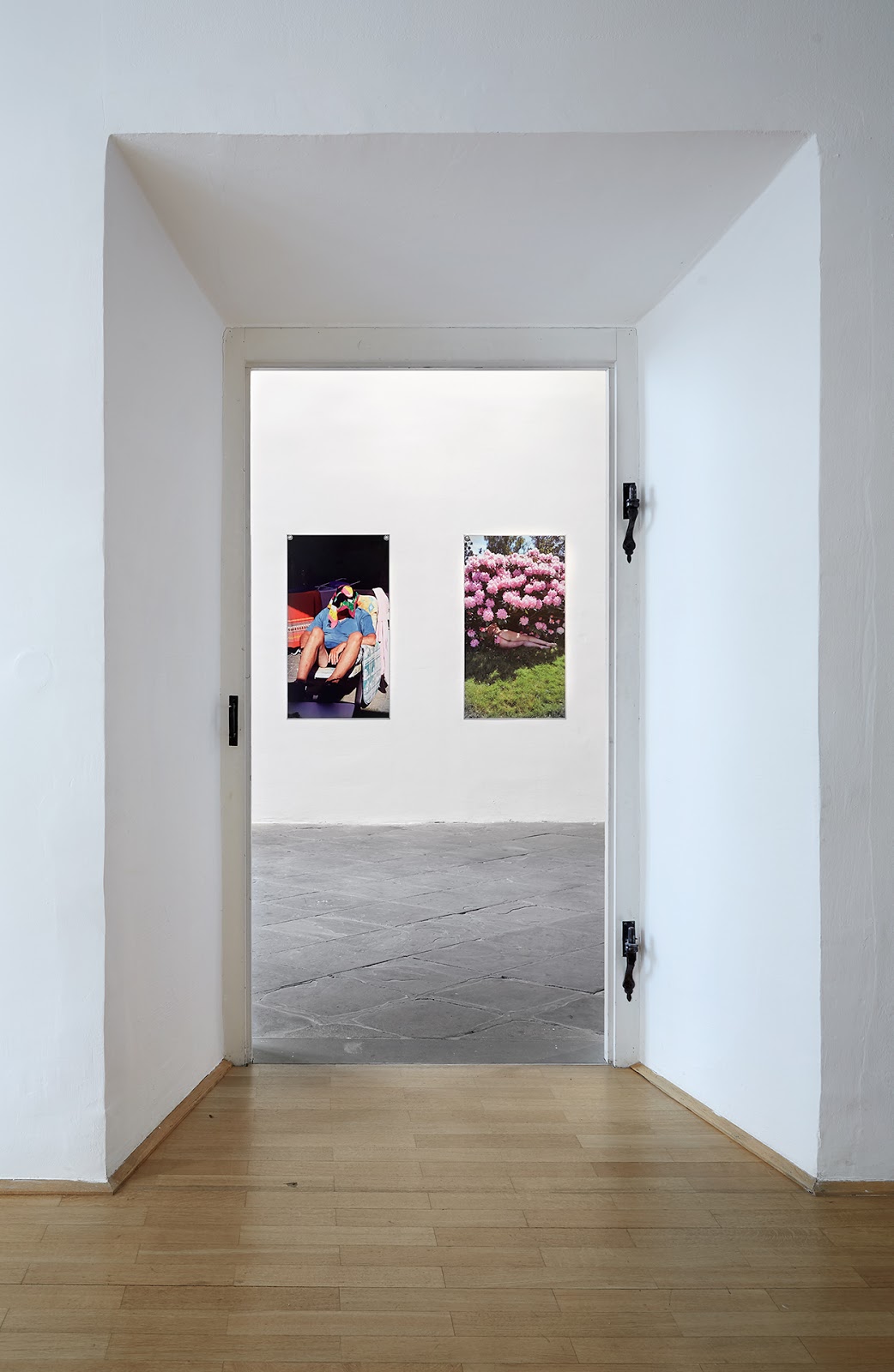 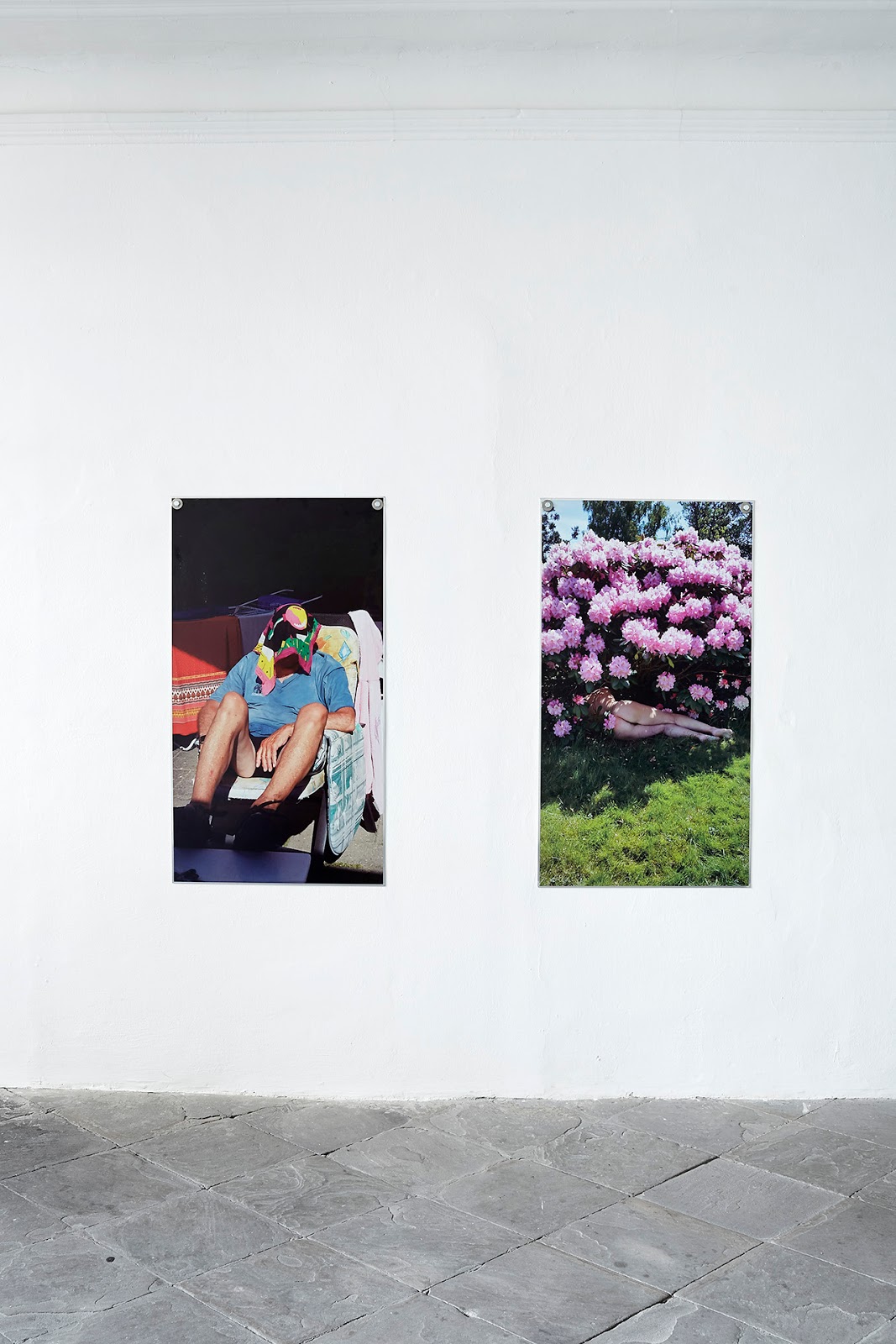 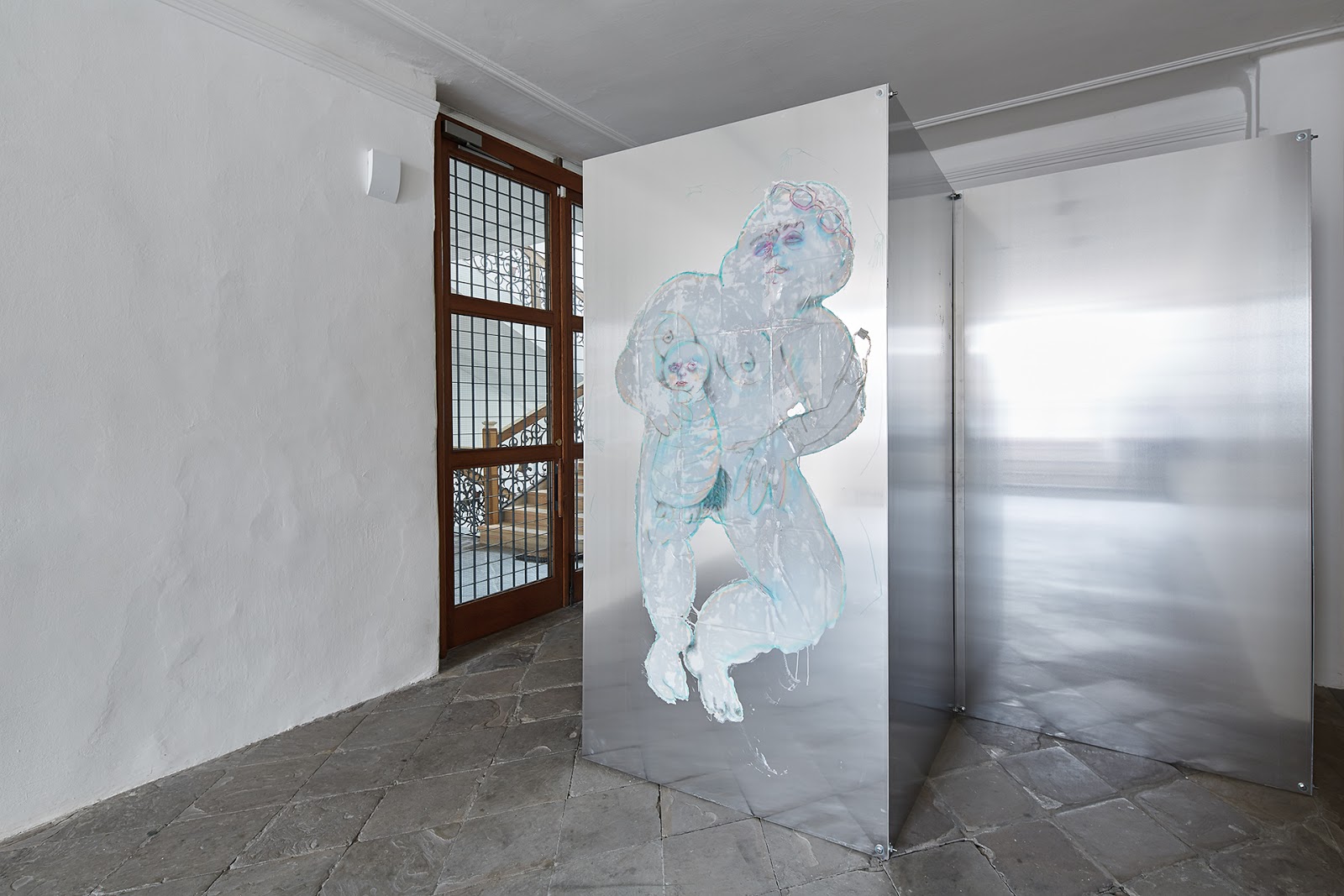 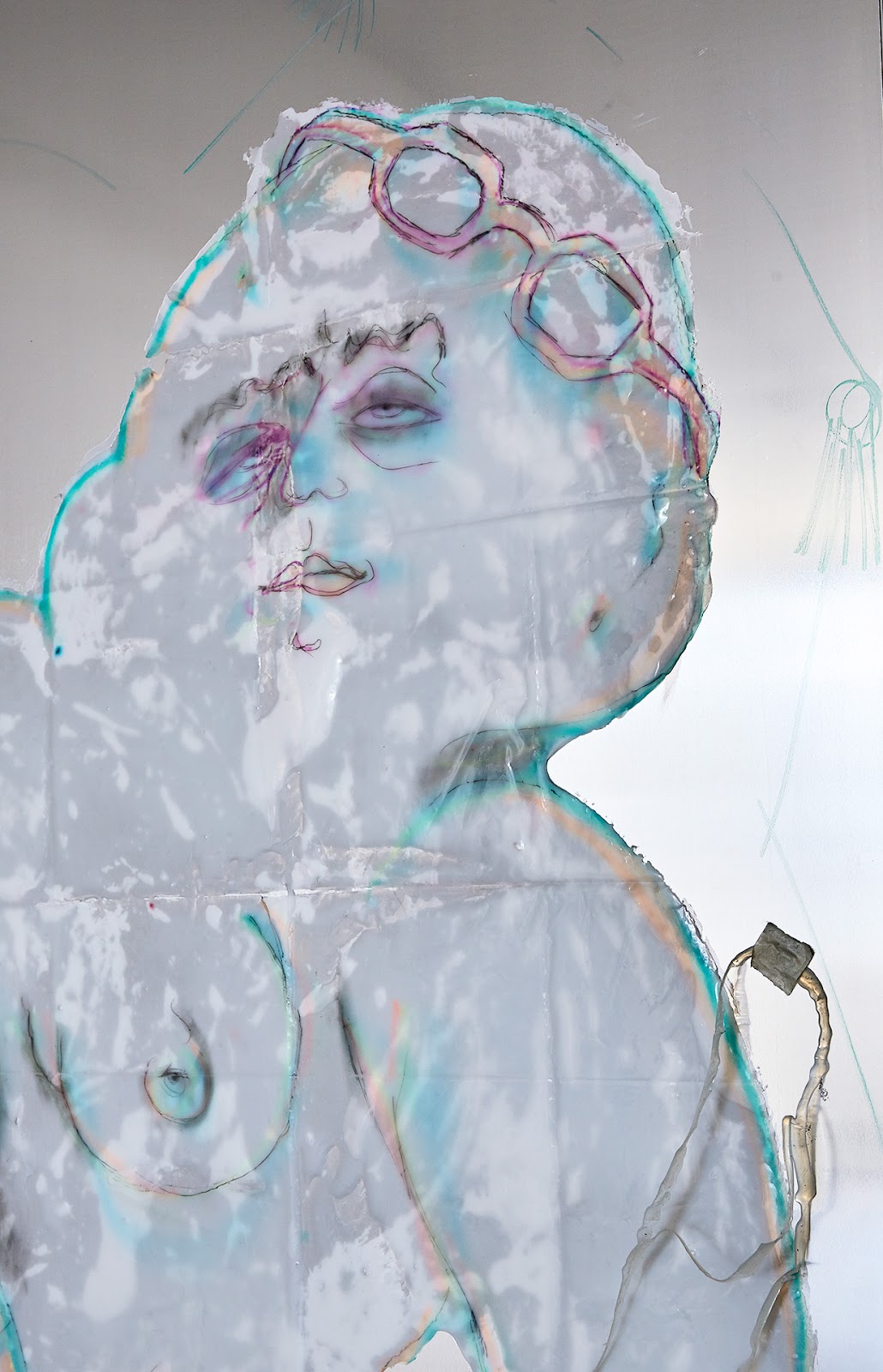 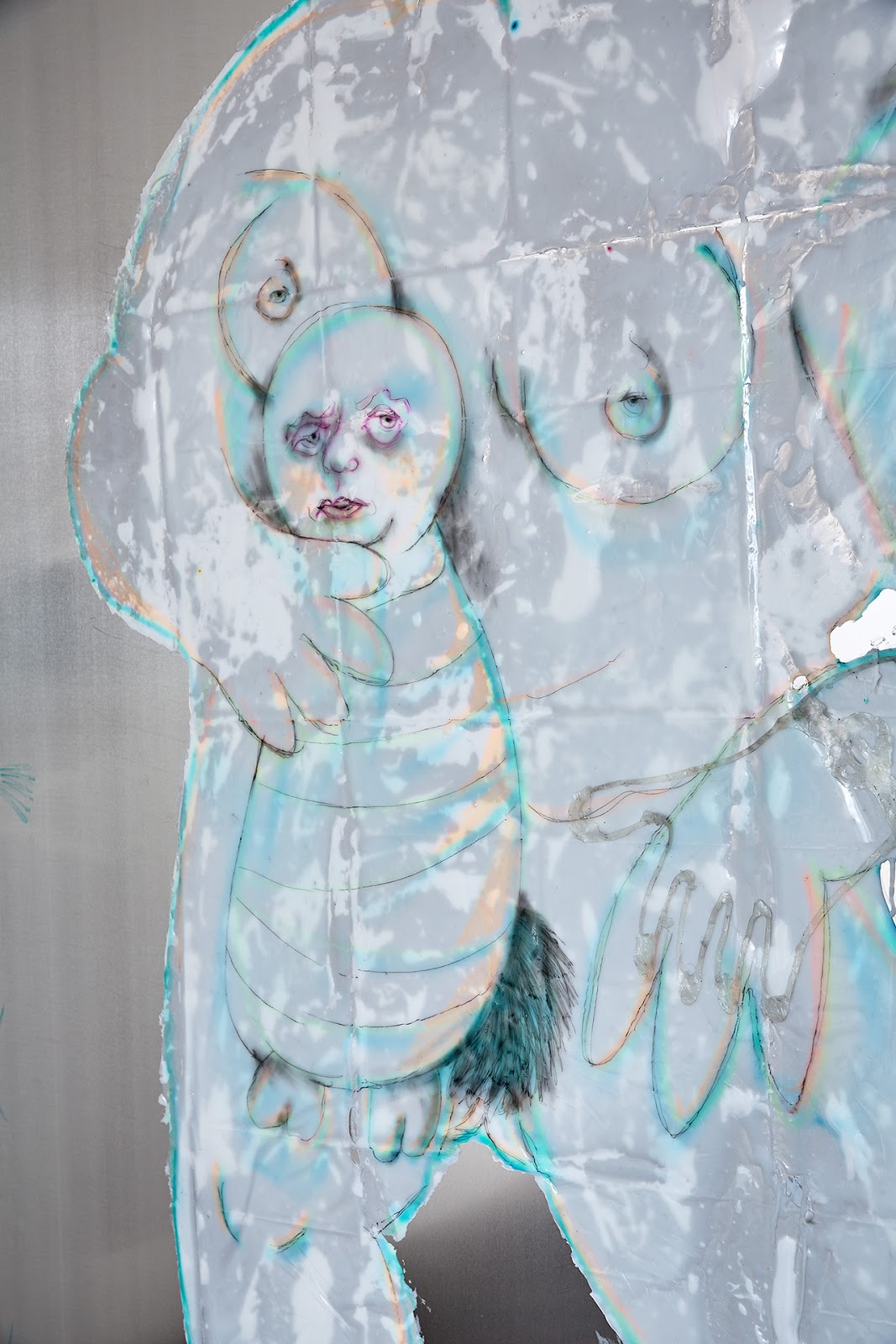 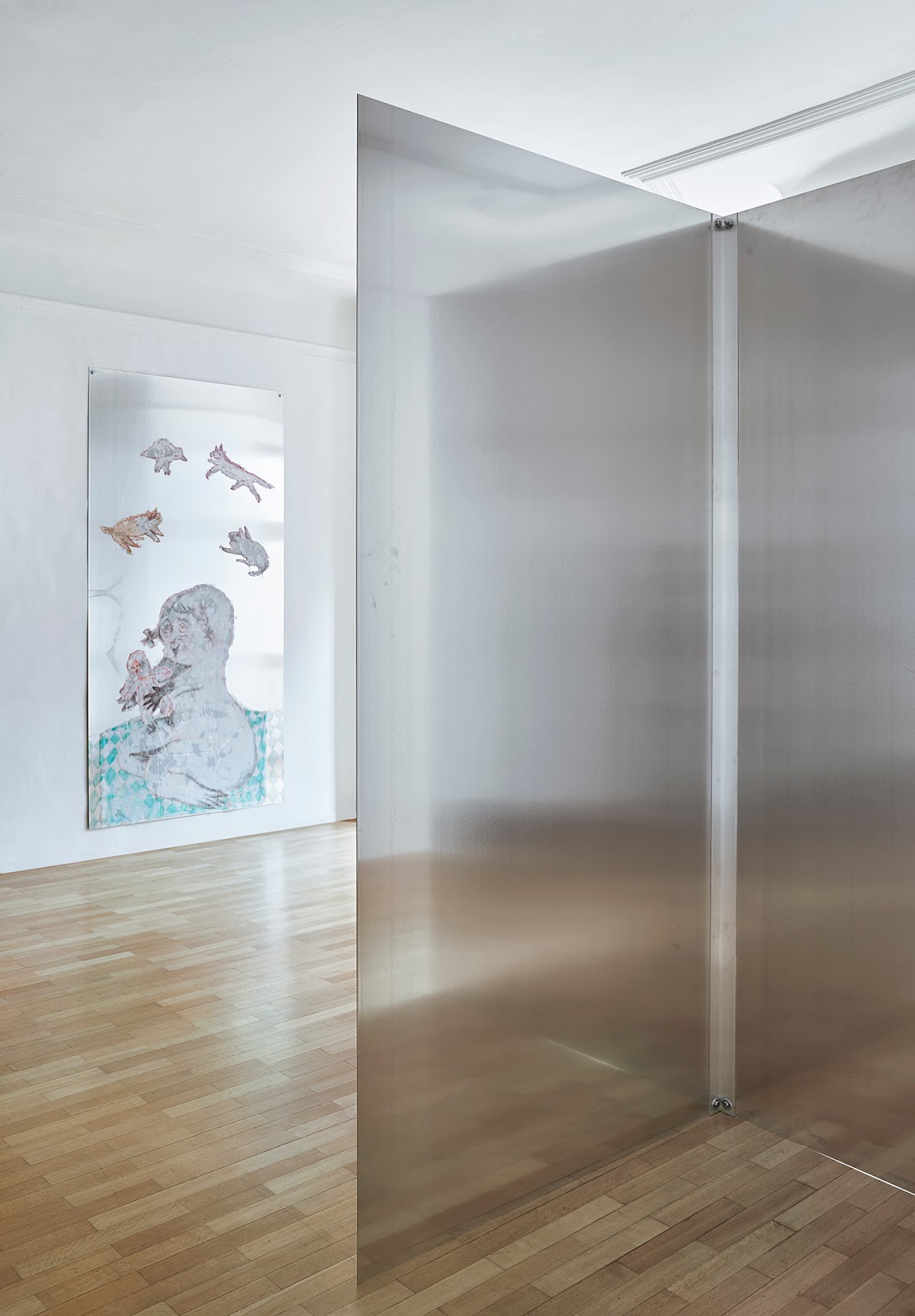 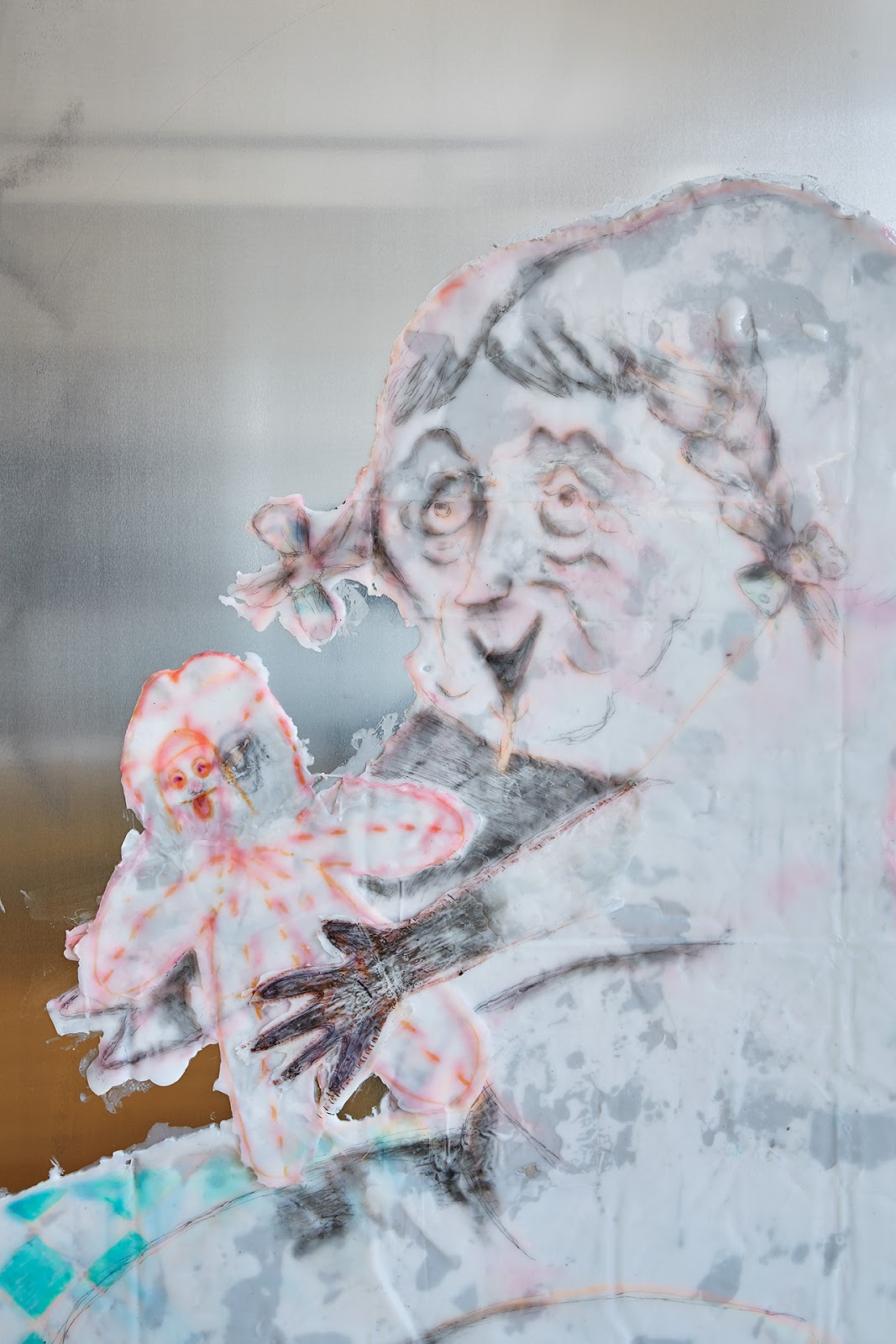 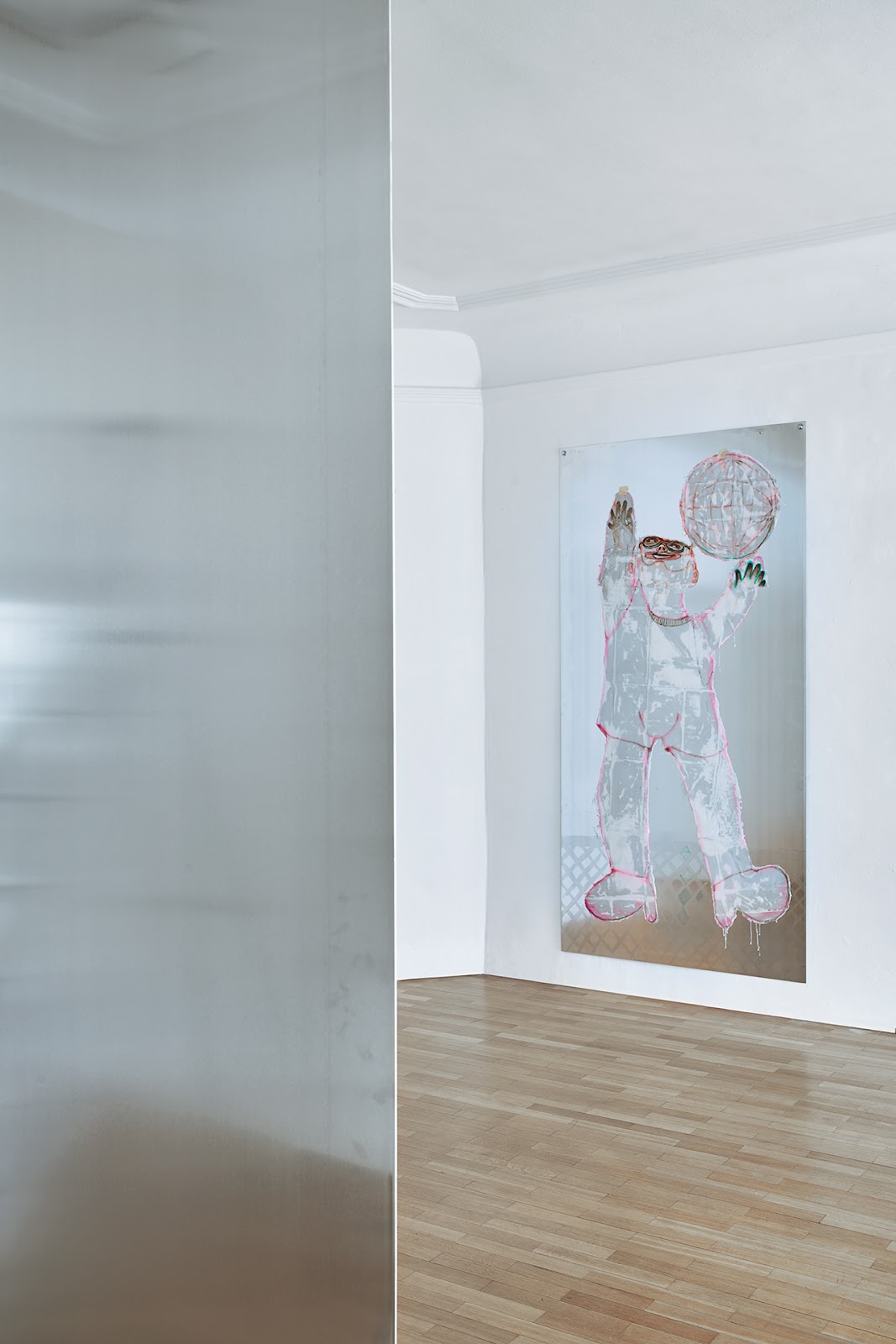 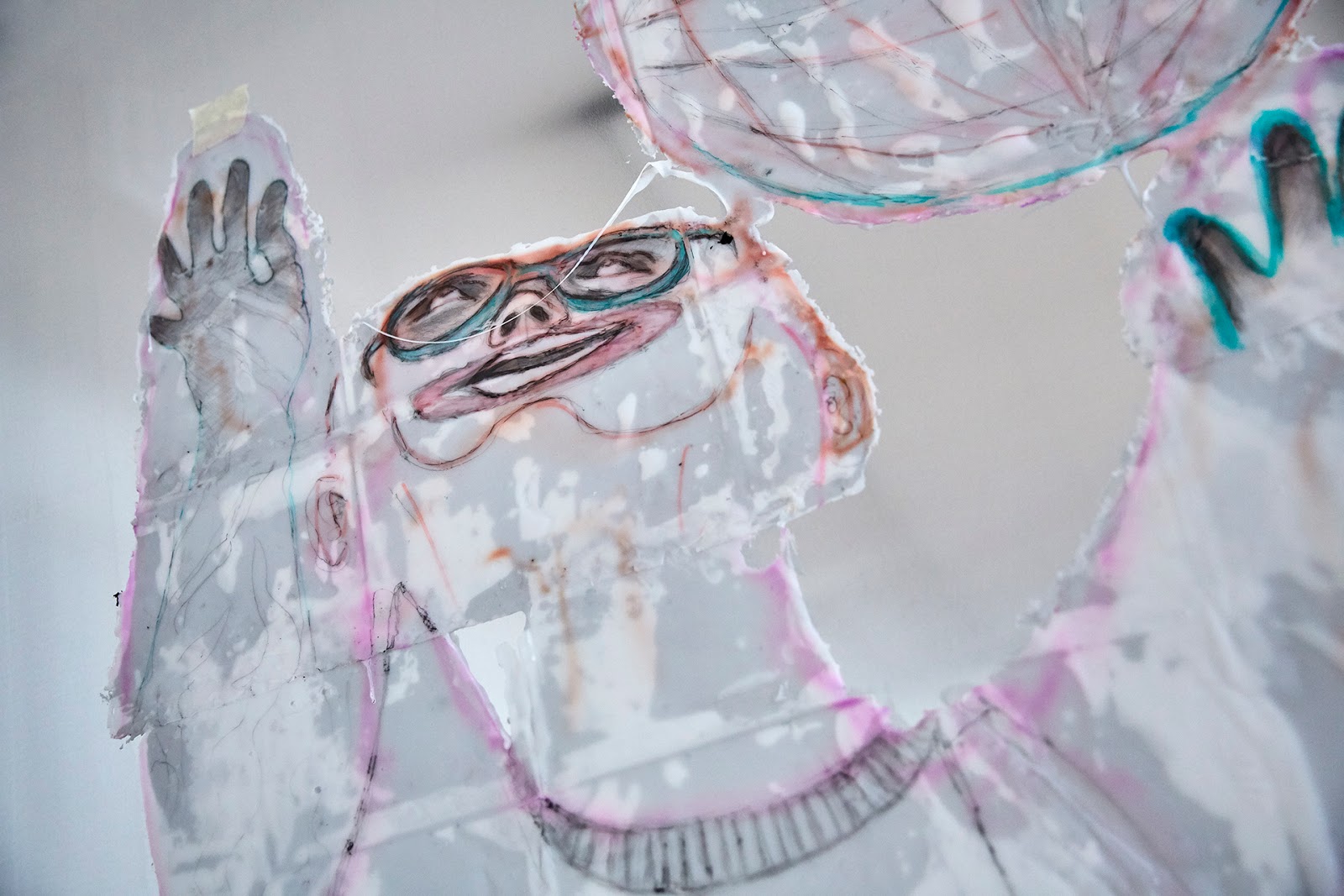 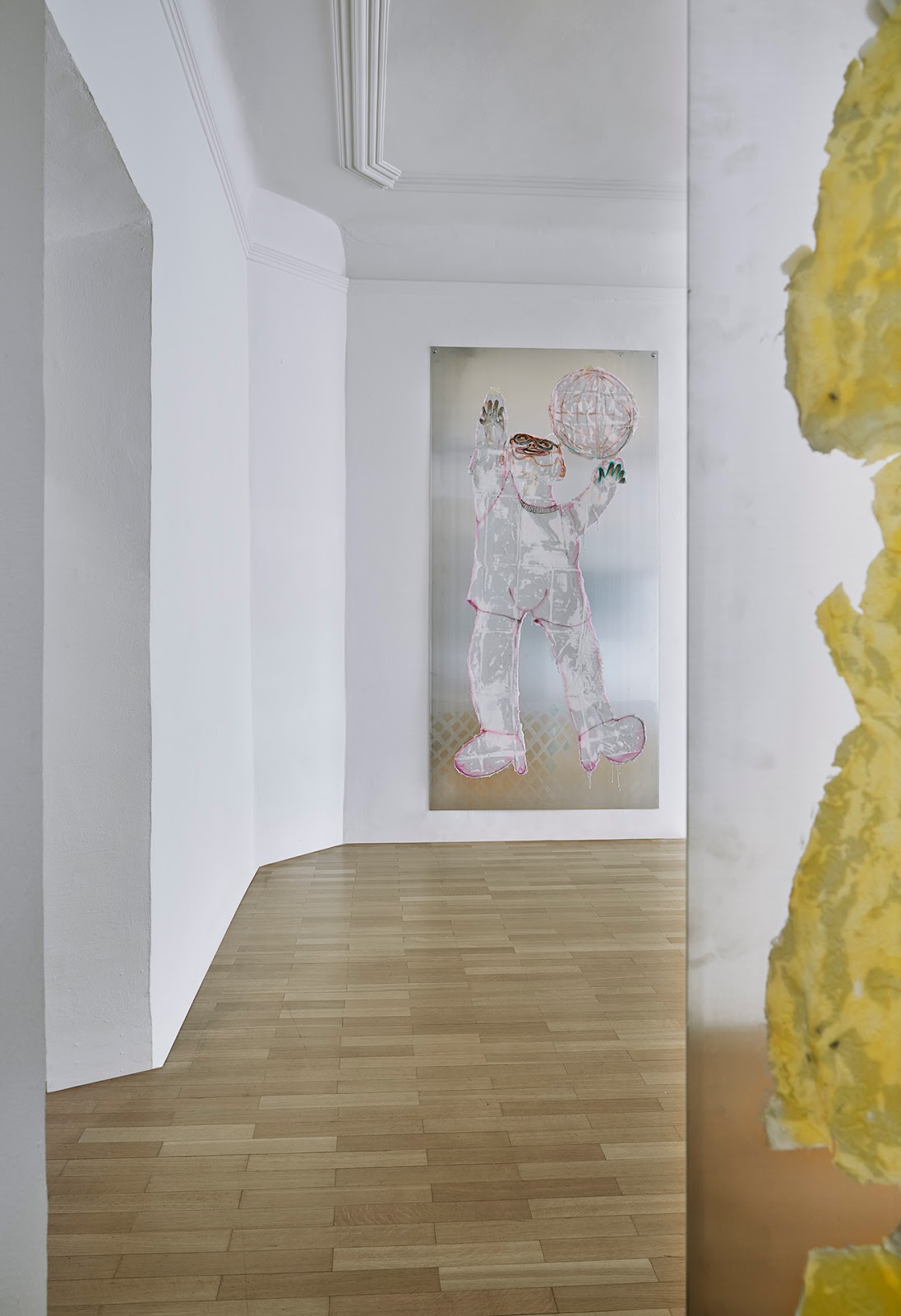 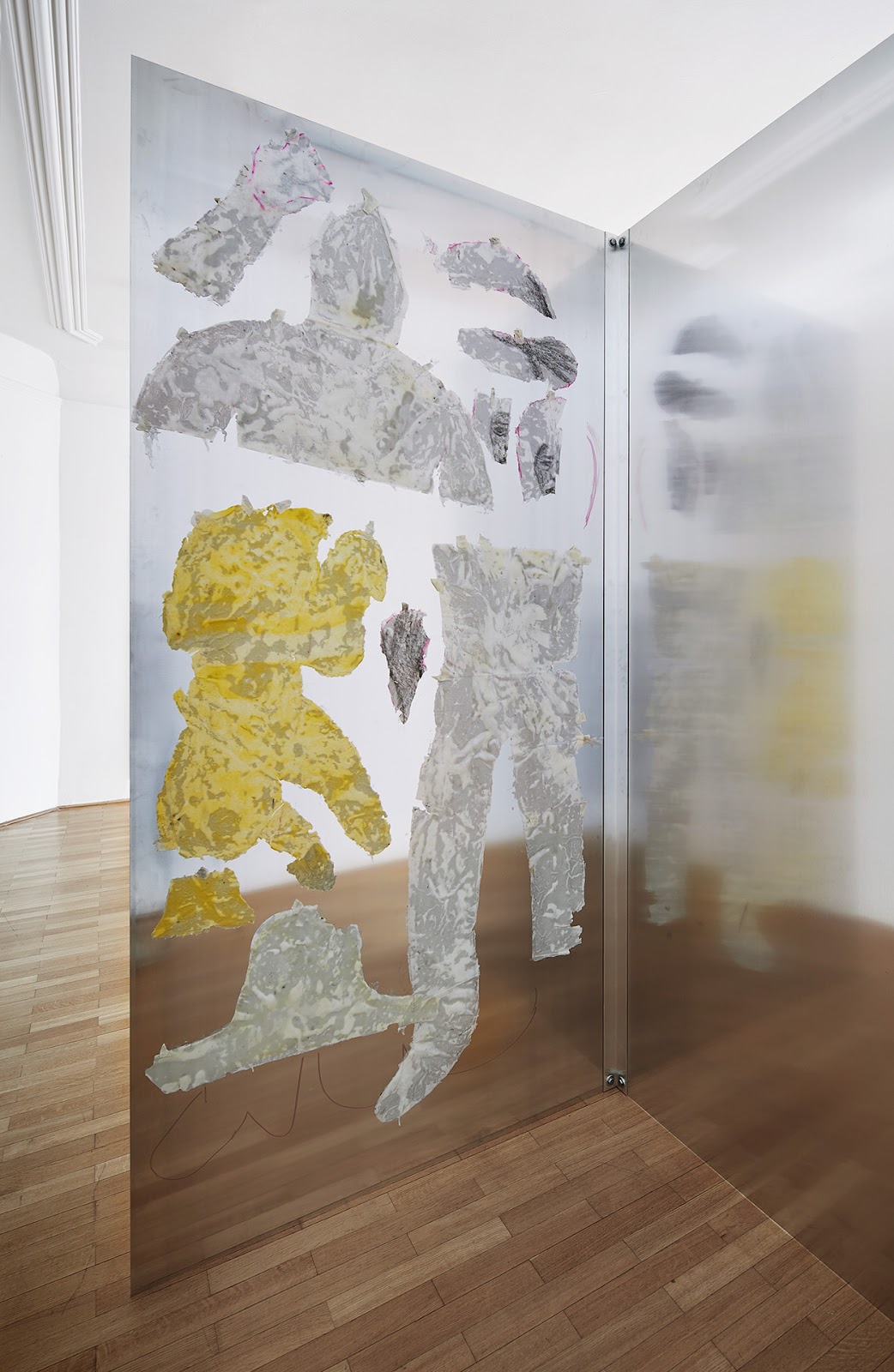 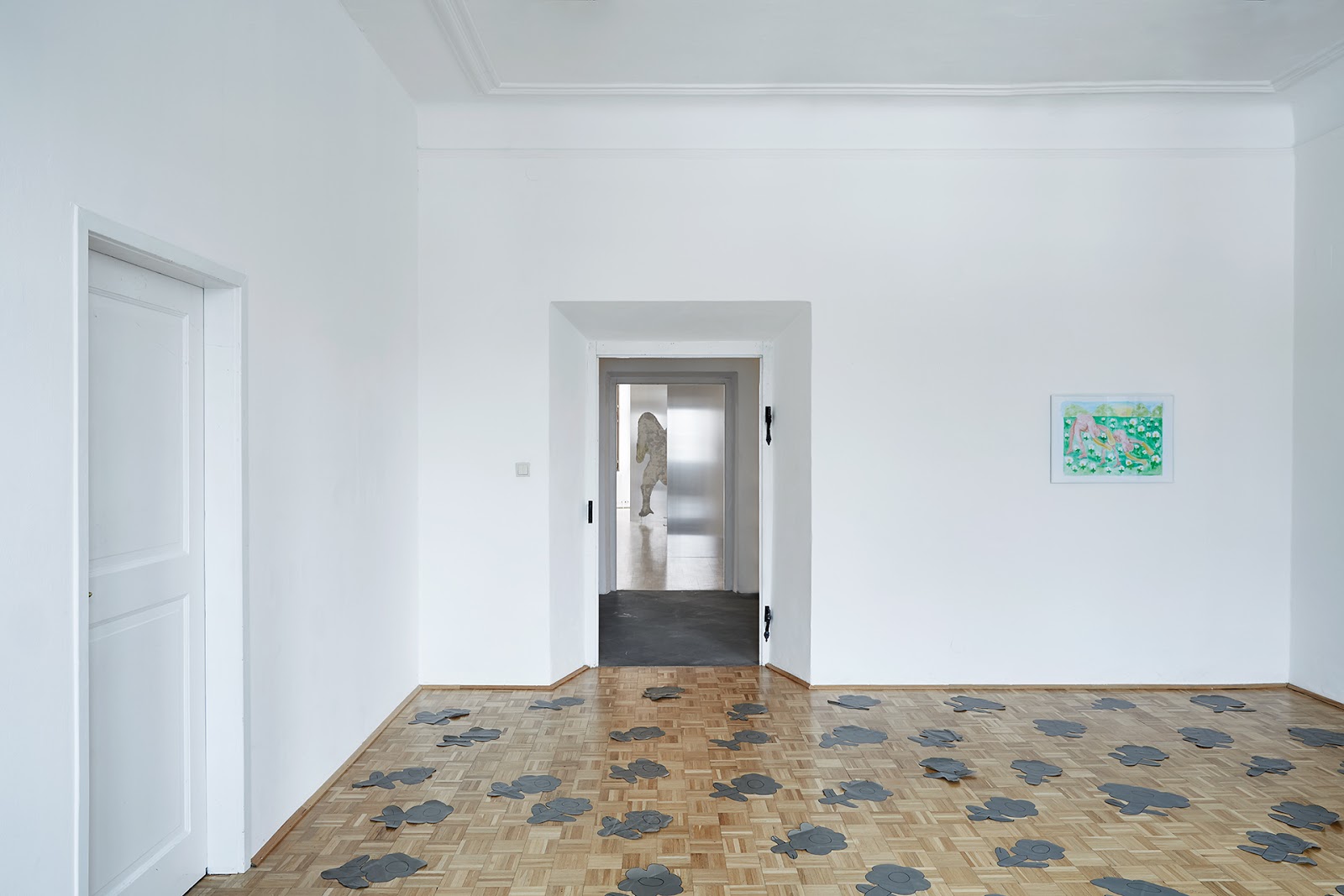 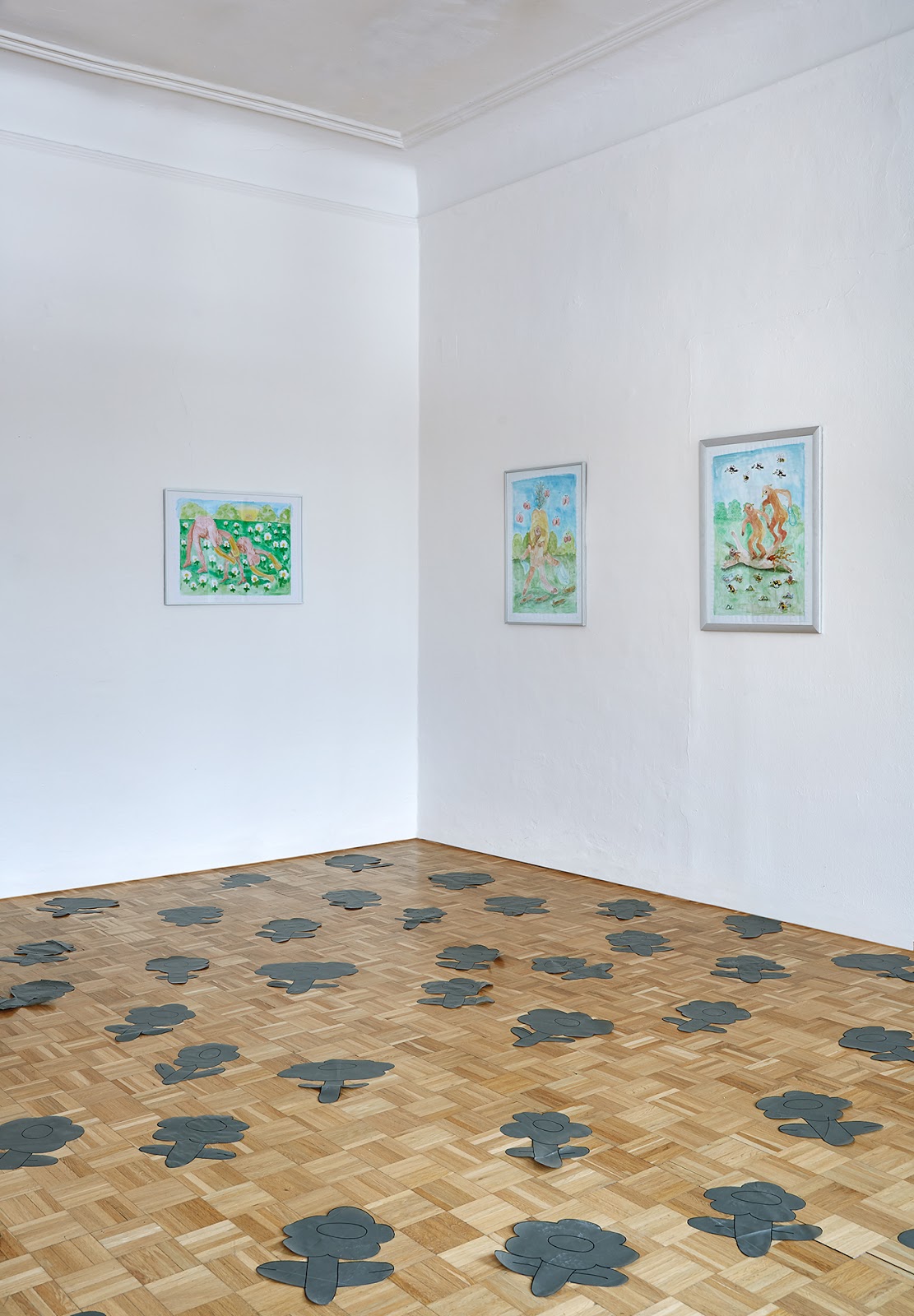 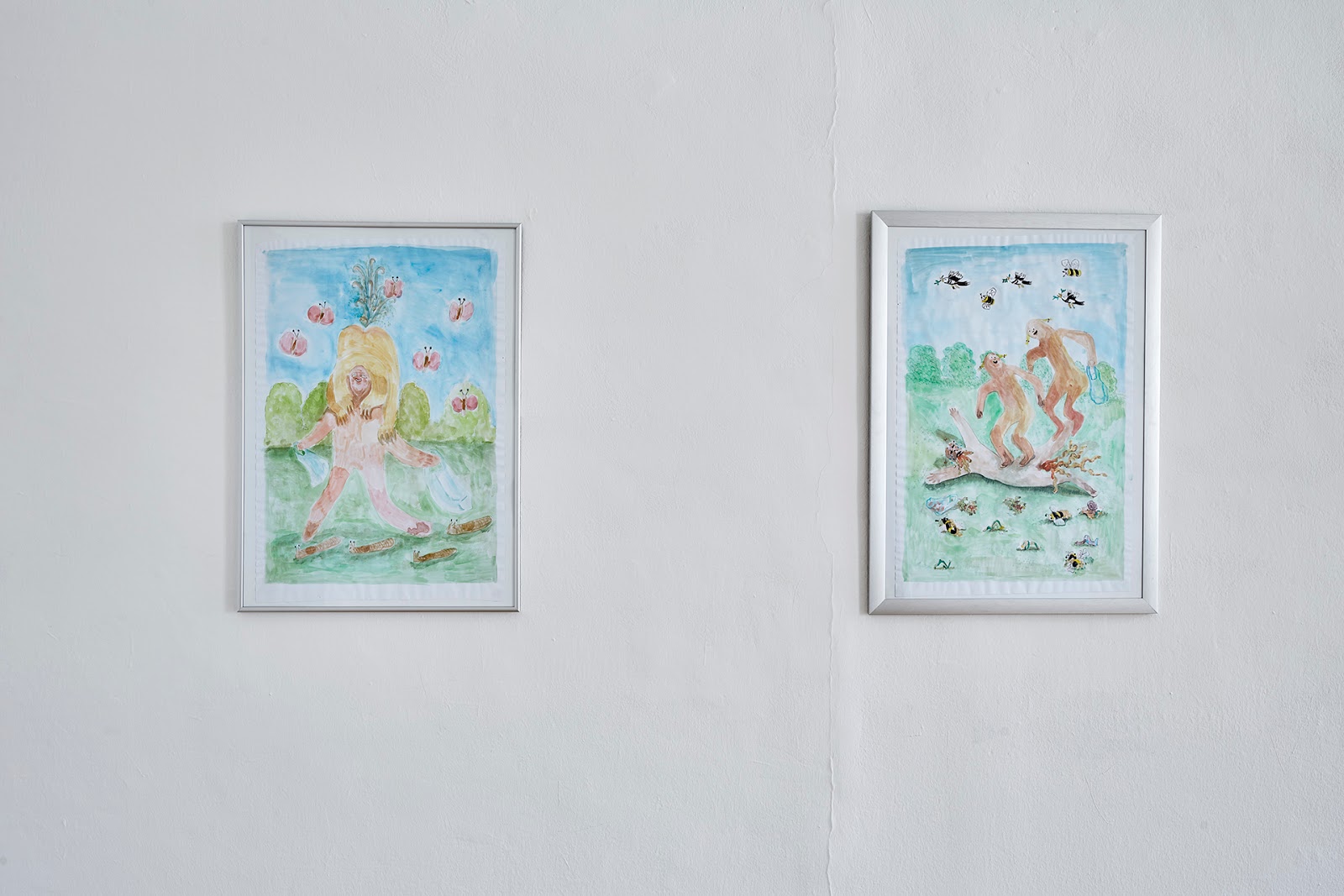 Imagine that your loved ones have been pulled out of your memories and sunk into a marsh. Imagine them dwelling there for thousands of years, then rediscovered and extracted from the soil as wrinkled bog bodies, weirdly fleshy, almost unrecognizable. Imagine them now replaced back into your mind. Maybe as your loved ones reappear from the dark, they somehow seem reborn. They aren’t any more the fixed containers ’mom’ or ’dad’, ‘sister’ or ‘brother’, ‘friend’ or ‘playmate’. They’re organisms that you look upon as if new. Perhaps the mottled surface of their skin, their slightly zany movements and uncertain smiles makes you feel related to them, but not weighed down by the narratives you’ve stuck to all of your life. Differently related. What’s changed? What’s that frivolous feeling? What’s this blush all over your body, from your cheeks down your spine and into your feet, as you start a brain-ride hanging out with your unfamiliar relatives? The distance makes you want to get closer. The power right at hand, the tinkling pleasure, as you move your new memory-bodies around – puppets, so alive they almost explode in your hands - a soft flow of intimacy that you didn’t expect. It feels like you’re being moved around too, you slide into that movement. Where’s the unease you usually connect with lineage, inheritance, roots? Suddenly there’s life everywhere as the bodies start bumping around, dancing in an effervescent garden, the flowers have a stark smell, someone throws a ball, the little doll looks uncannily at you, a fat bee circling in the air, a hat on the ground, it´s all bursting, an agency so vulgar and direct you can’t help but stare.


Is that your mother or a stranger right over there in the grass?


***
In Saskia Te Nicklin’s solo exhibition ‘the garden, some leftovers, and us swaying' we enter a fantastical universe populated with figures and bodies in strange, ripe and chaotic nature environments. Large drawings in watercolor are shown alongside inventive collages on larger than human-sized pieces of aluminum.

1. Drawing: A human body with light pink skin stands looking straight at us carrying another figure, more yellowish and animal-like, on their back. No head is visible, but four paws hang over the carrying figure’s shoulders, like a cape. Out of this other body’s ass, which rises like a heartshaped volcano into the sky, comes an explosion of farts looking like peacock feathers. Chubby pink butterflies gather around the bodies while a parade of long slugs move through the grass at their feet.
2. Drawing: Two flower picking and faceless bodies that seem to have been taken apart and reassembled backwards move through a flower-field with mustardyellow gloves. They seem like de-erotisized Hans Bellmer dolls put to work.
3. Drawing: Two joyful people jump on a third body, squeezing out vomit and faeces from that body’s mouth and ass. Birds, bees, frogs and slugs fly or twist around in the grass.
4. Aluminum: A huge light blue and grey figure looks at us in panic, its hands covering its face, trying to hide astonishment or fear. Dark mountains rise in the background. Two oversized bees and flowers keep the figure company.

Nicklin´s visual expression is both naïve and grotesque. It’s pleasurably absurd, almost shamefully tactile. There’s a fascination with bodily shapes and fleshy movements, the delightful ugliness of nudity, think Francis Bacon and Lucian Freud. Yet Nicklin is less existential and much more kitschy, playful and fantastical. Her figures might be bodies before they are humans: A bunch of tender idiots, childlike violators, clowns or fleshy body bags intensifying human affect: Sorrow, panic, longing, crazy joy. These figures are gender fluid or have no gender at all. They don’t fit into identity or family categories, yet they seem to belong to some kind of community or family: One figure is clutching a fat baby or maybe a doll; other figures are together, doing things to each other or working. The surroundings are just as significant as the bodies. We move through distorted bliss, dystopian, voluptuous fertile landscapes. Bees and flowers are kitschy symbols of fertility, reproduction and creation that obsessively show up in almost every image as devoted extras. Yet every piece has a sculptural feeling: Composite next to composite, a strange flatness or separation into parts.

Nicklin is interested in the microcosm of the family and the macrocosm that surrounds it. She plays with the emotional inheritance flowing between these spaces and it’s physical expression. She´s not scared of the most basic human feelings: shame, anxiety, panic and tenderness. She´s not afraid of playing with perversion and sexuality. In Blush, theorist Elsbeth Probyn writes of shame as an affect that not only relates to guilt, but also to interest and passion. When we are interested in something we blush. We want this. Shame is an affect that creates ruptures in our understandings, habits and norms. In her book Touching Feeling: Affect, Pedagogy, Perfromativity Eve Kosofsky Sedgwick has called shame infectious: it creates surprising contact between people, a different view on oneself, on others. Maybe this is what happens when we move around the gallery looking at Nicklin´s bodies, bees and bursting flowers? Maybe we connect differently with our own thoughts or think differently of the people we are close to?

The relationship between shame and family unfolds more in Nicklin´s big aluminum pieces. Here, Nicklin’s father and a mother exist as mythological figures adapted to the aluminum from camera phone photos taken last summer. The father took a picture of the mother. She instructed him. Maybe she predicted that her daughter would like this photograph and transfer it into a new kind of materiality ? The mother lays naked in the garden, her back turned from the viewer, under a huge blossoming rhododendron. Is she posing?

In order to create the majority of her big aluminum pieces, Nicklin first paints with wood-glue on a ground of ordinary plastic-sheets. She hovers above the ground and pours the liquid glue onto the plastic in bodily formations. The bombastic glue, at first transparent and jelly-like, gross and shiny, is shaped by the texture of the lightweight plastic and the ground. There’s friction as bodies, flowers and bees slowly come to life. Nicklin peels the then dried glue-elements off the plastic, one piece at a time. Some are stiff and fragile, others still more flexible. She places them on the aluminum surfaces, assembling a sort of collage. It’s physical work. The aluminum pieces are large – 250 x 125 cm. The dried glue-elements are still separate entities that are now coming together in small scenes. They are not quite a ’we’, but a community of individuals – the same way that a body is made up by organs, intestines and limbs that function autonomously but together are in charge of a life. Nicklin´s deliberate choice of average materials like glue, aluminum and plastic seems important. There´s something humbly alienating about these materials, which provide the right resistance to Nicklin´s overall ambition: Confronting shame, delving into intimate, personal and grand narratives, crossing boundaries with care and imaginative force. In the portrait of the mother, Nicklin´s method distorts the romantic reclining nude. Like with Duchamp´s Etant Donnés - his female shape made of hair, glass, parchment, oil paint and plastic clothespins - Nicklin´s mother-figure is artificial and stylized. She’s seems not to be the mother of Nicklin via their common DNA or bloodline, but rather a relative who, as she grows to life in her voluptuous physicality, makes us want to connect through touch or imagination.

The aluminum pieces, which also function as room-dividers, share motives with the drawings. Yet the size and the weird opaque surface add something. You can’t quite see your own reflection distinctly, but you see something. Something is moving right there, but there’s never a clear view. Its’ not you, but then who, or what? Maybe you get a glimpse of the other guests in the gallery. This ambivalence stirs your attention. The surface is not exciting, also not irrelevant. It’s dirty – with fingerprints and traces from the work process, fissures and faults. All of this – the dirt, the size and the plainness adds a productive resistance to the affective and grotesque content.

There’s something shameful and wonderful about Nicklin´s confrontation with the naked and absurdly vulnerable bodies, the abject scenes in the paradise-like garden, the new versions of mother and father. There’s some kind of surrender. A open and curious engagement with the materials she’s chosen. Maybe Nicklin knows: We can’t ever represent the body truthfully. Every time we try to get close to a ‘real’ representation of the bodily, we end up reinventing it as a distortion. As something new. That’s what Nicklin is doing too. With absurd passion she wants to connect to something – her roots, her family, her own body. She wants to re-imagine the bodily on a greater scale, as a material container placed in a social world bound to find its own way when it comes to fertility and reproduction, relations between humans and other organisms, ways of living and being together.


Ida Marie Hede Bertelsen (b. 1980) has her education from the Forfatterskolen in 2008 and a Mag.art in Art-history from the University of Copenhagen, and has her MA in Aural and Visual Culture from the Goldsmith College in London.