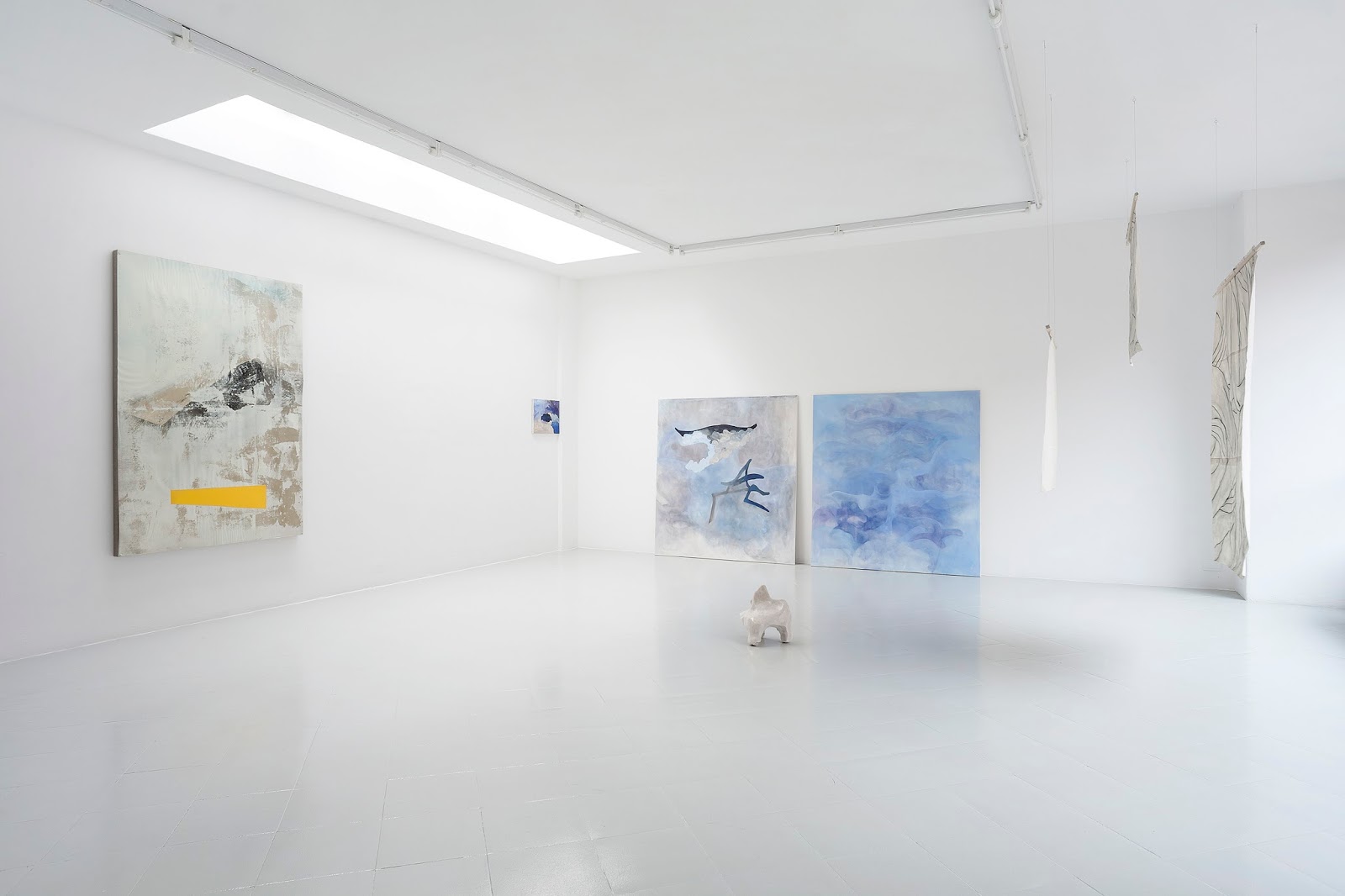 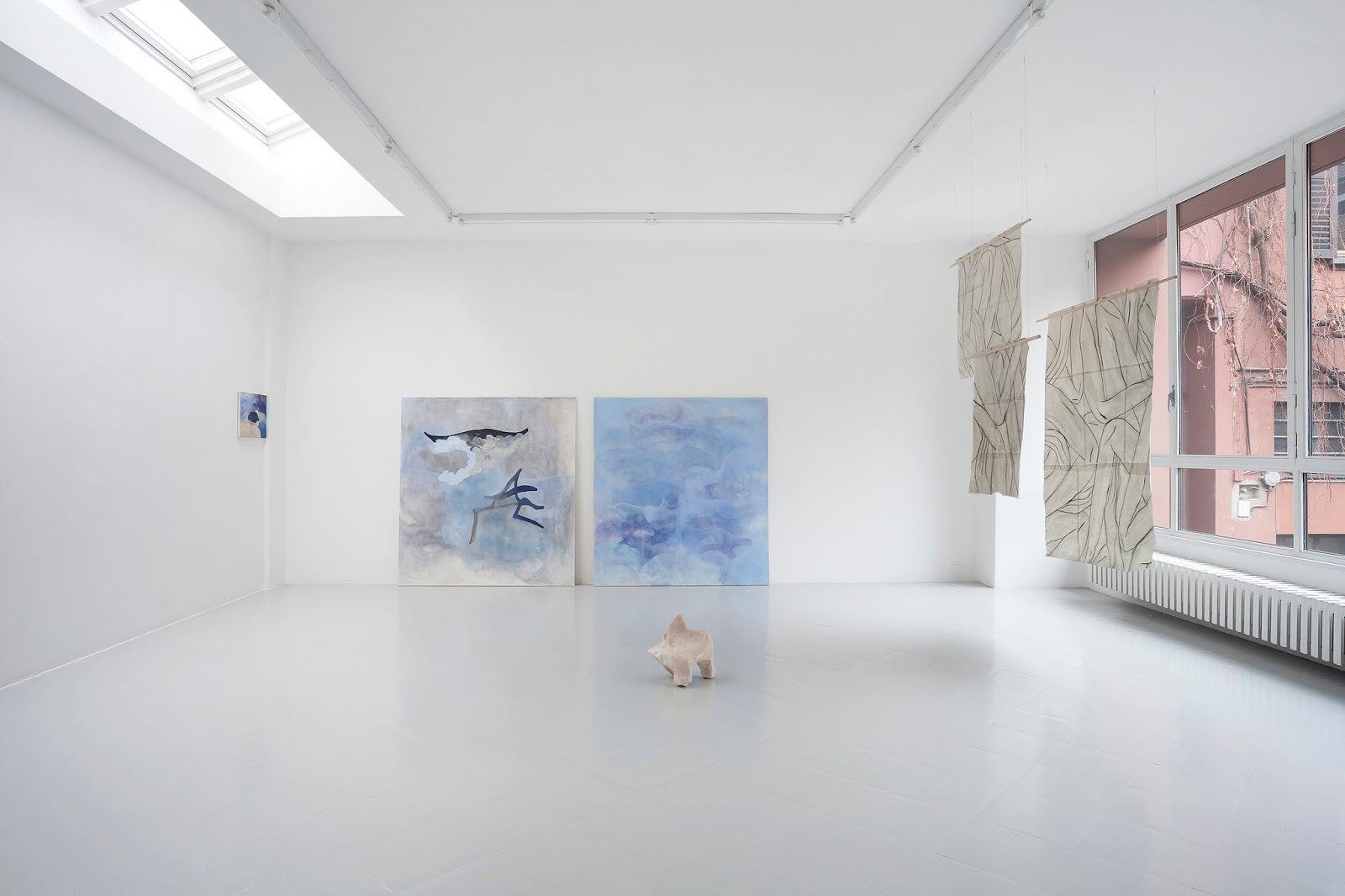 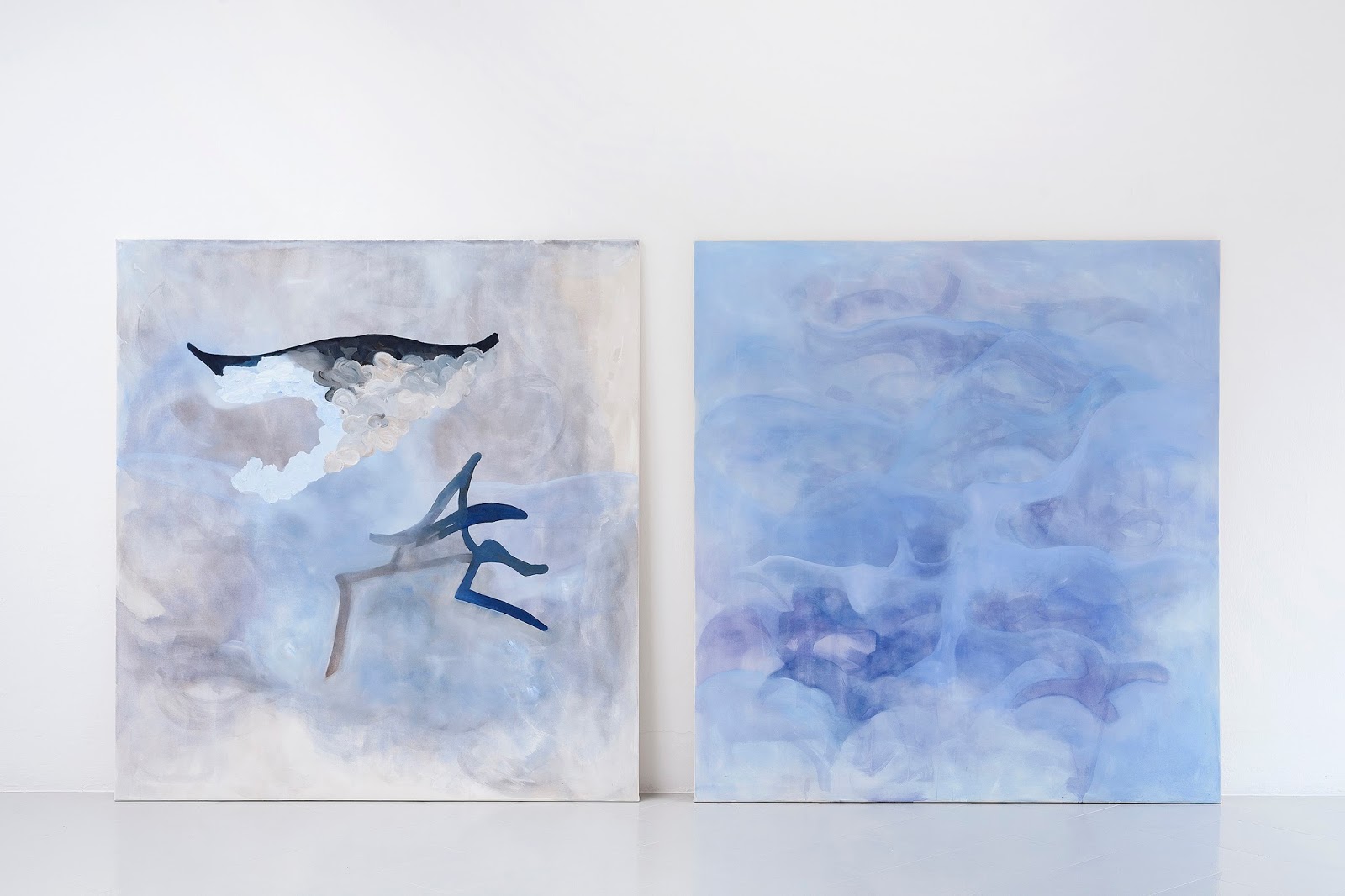 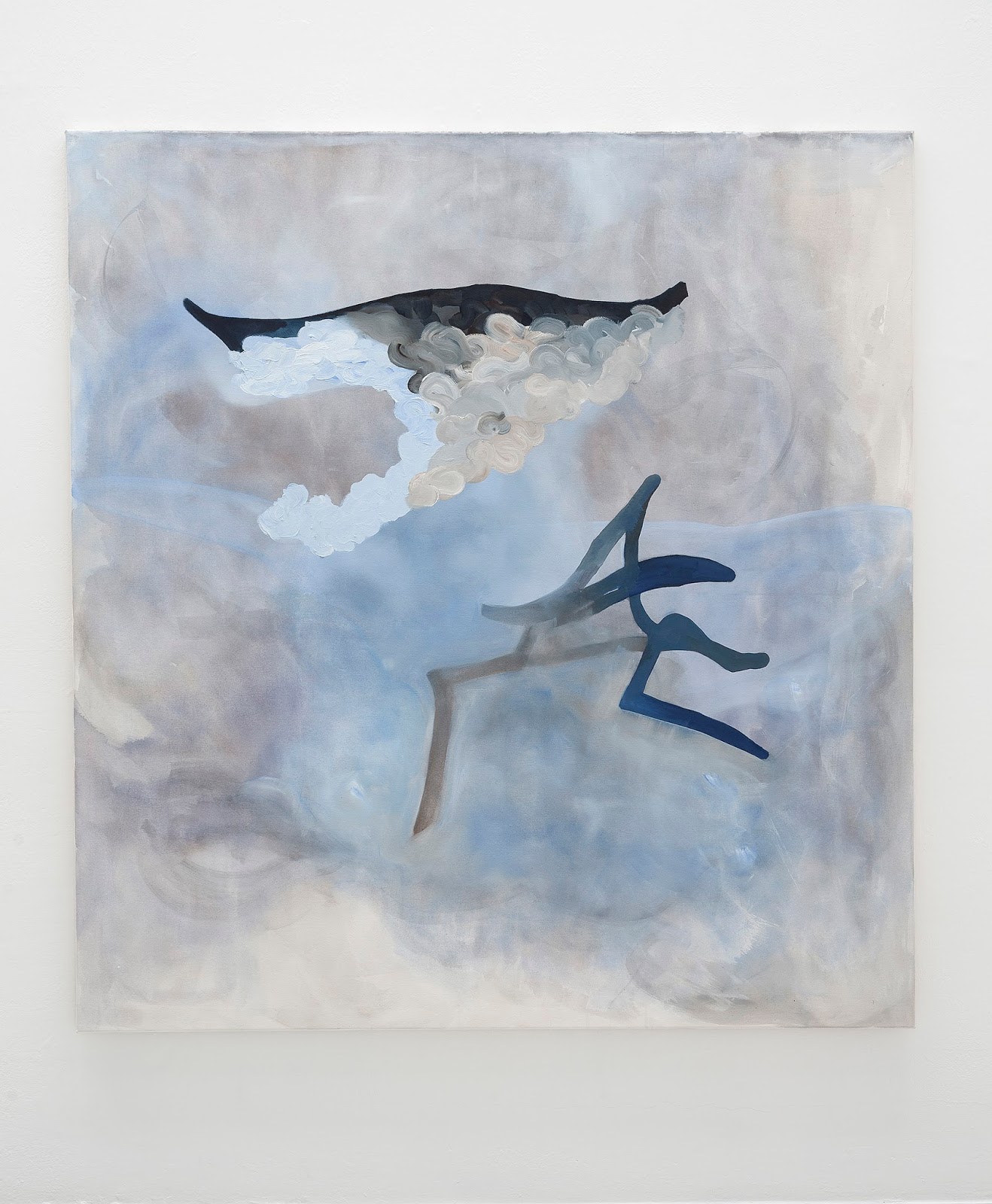 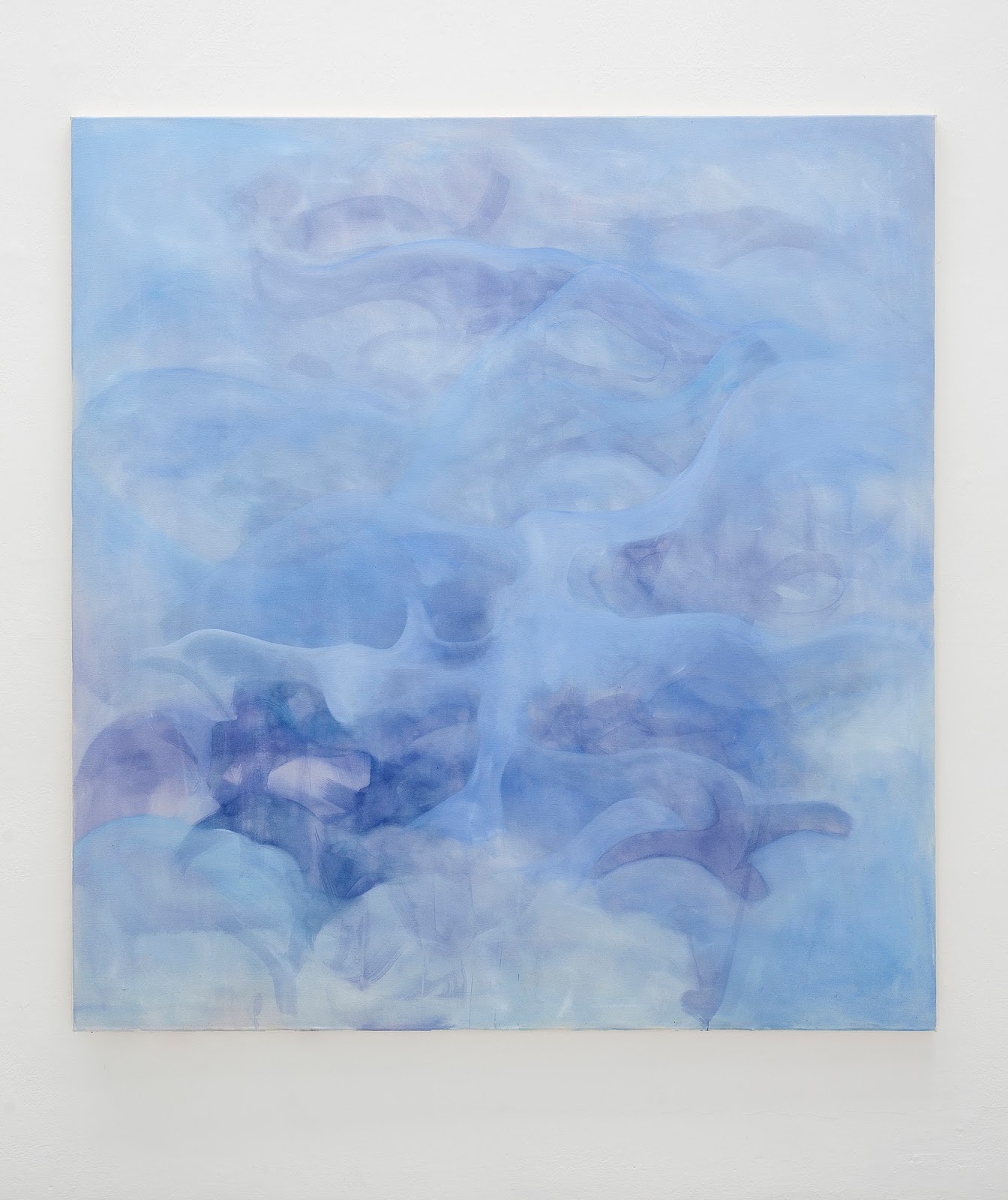 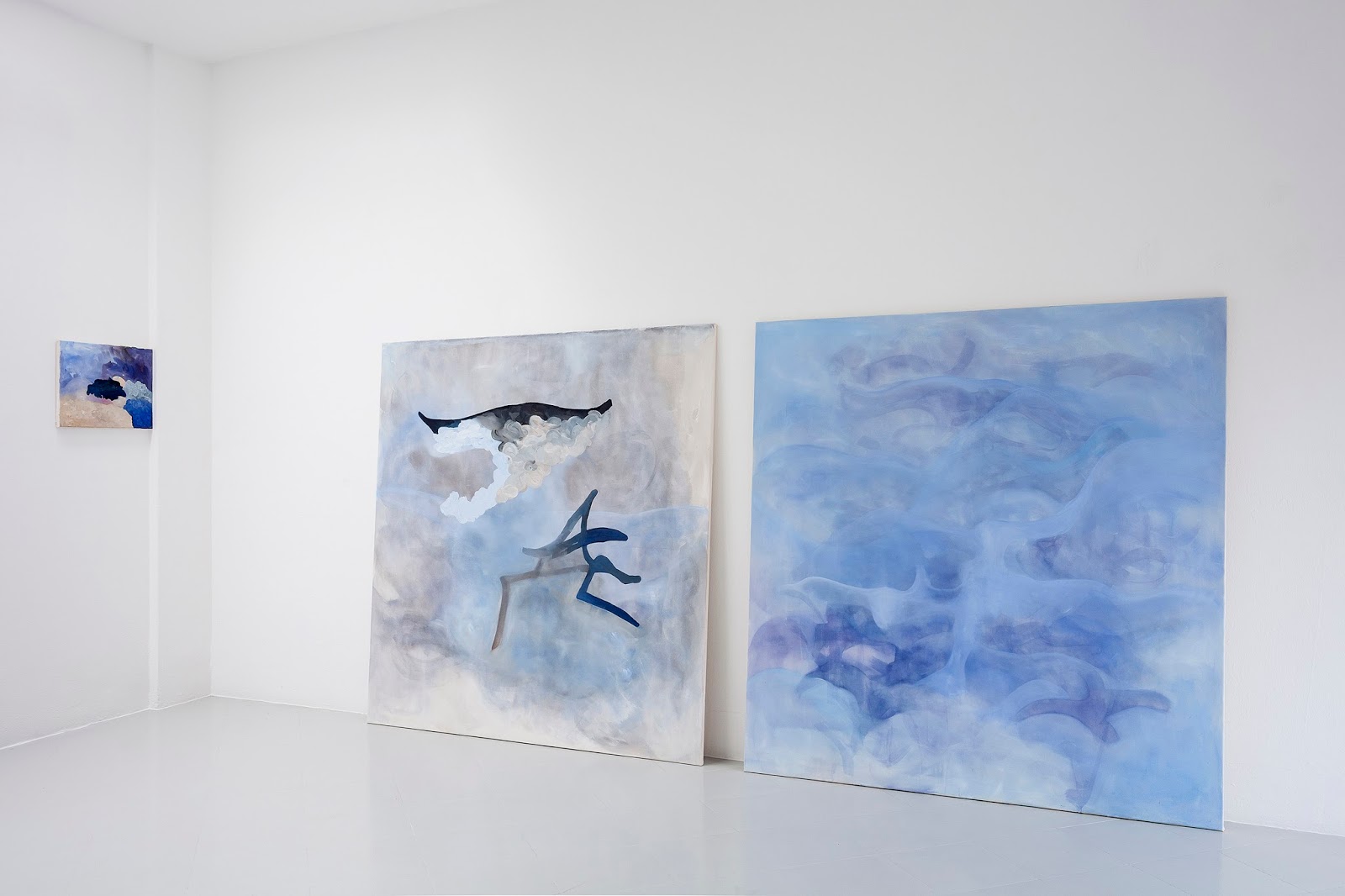 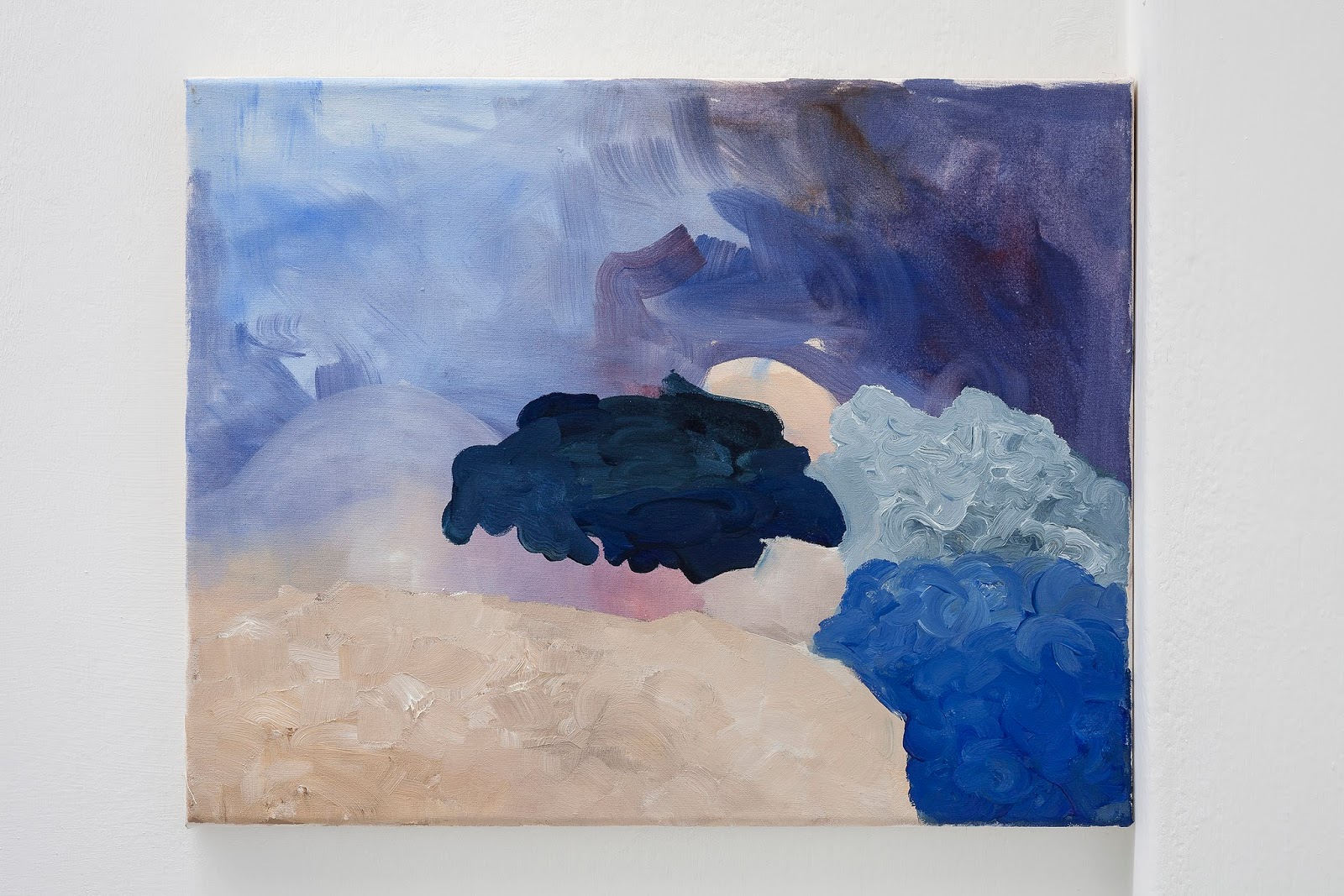 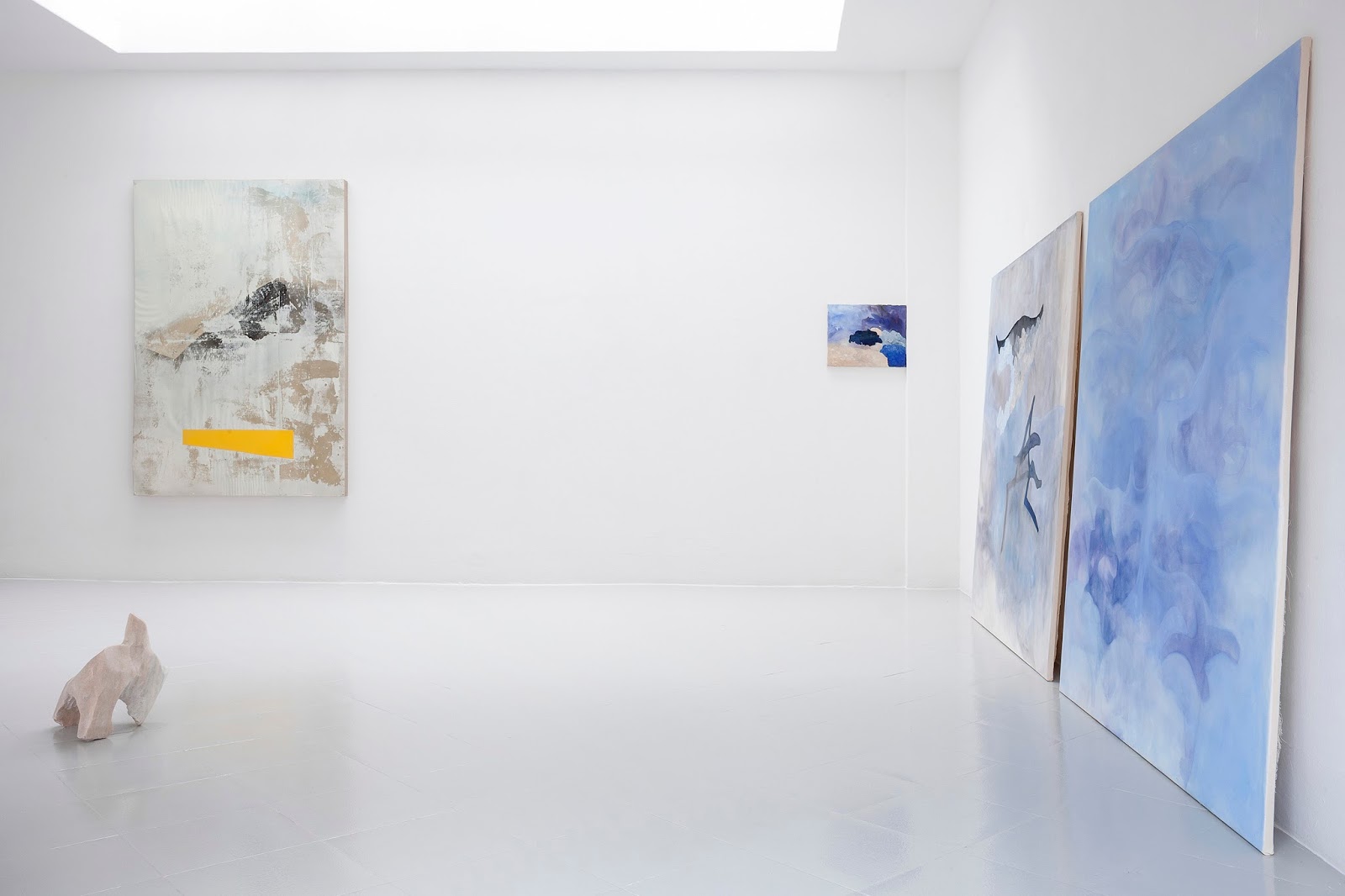 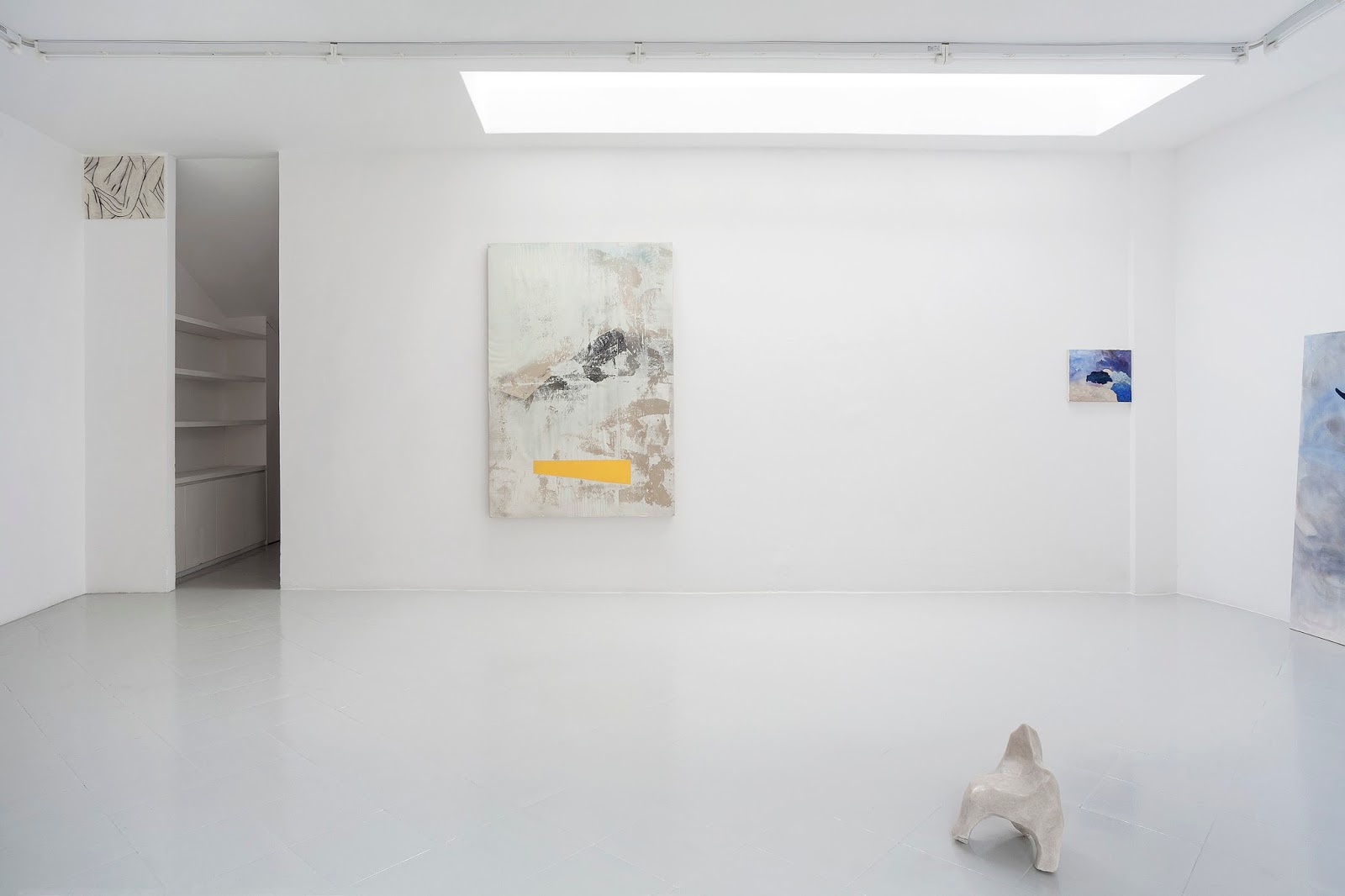 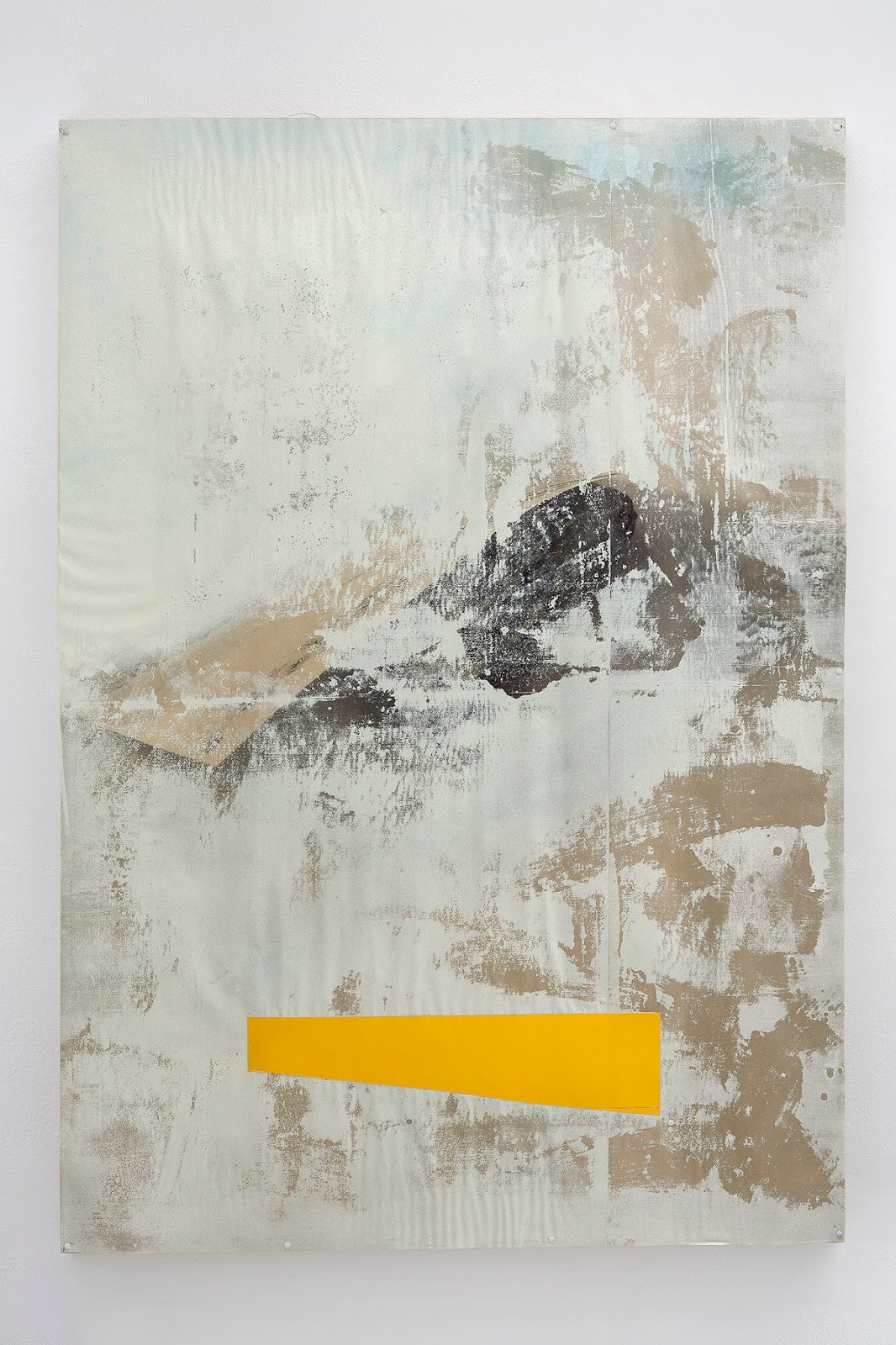 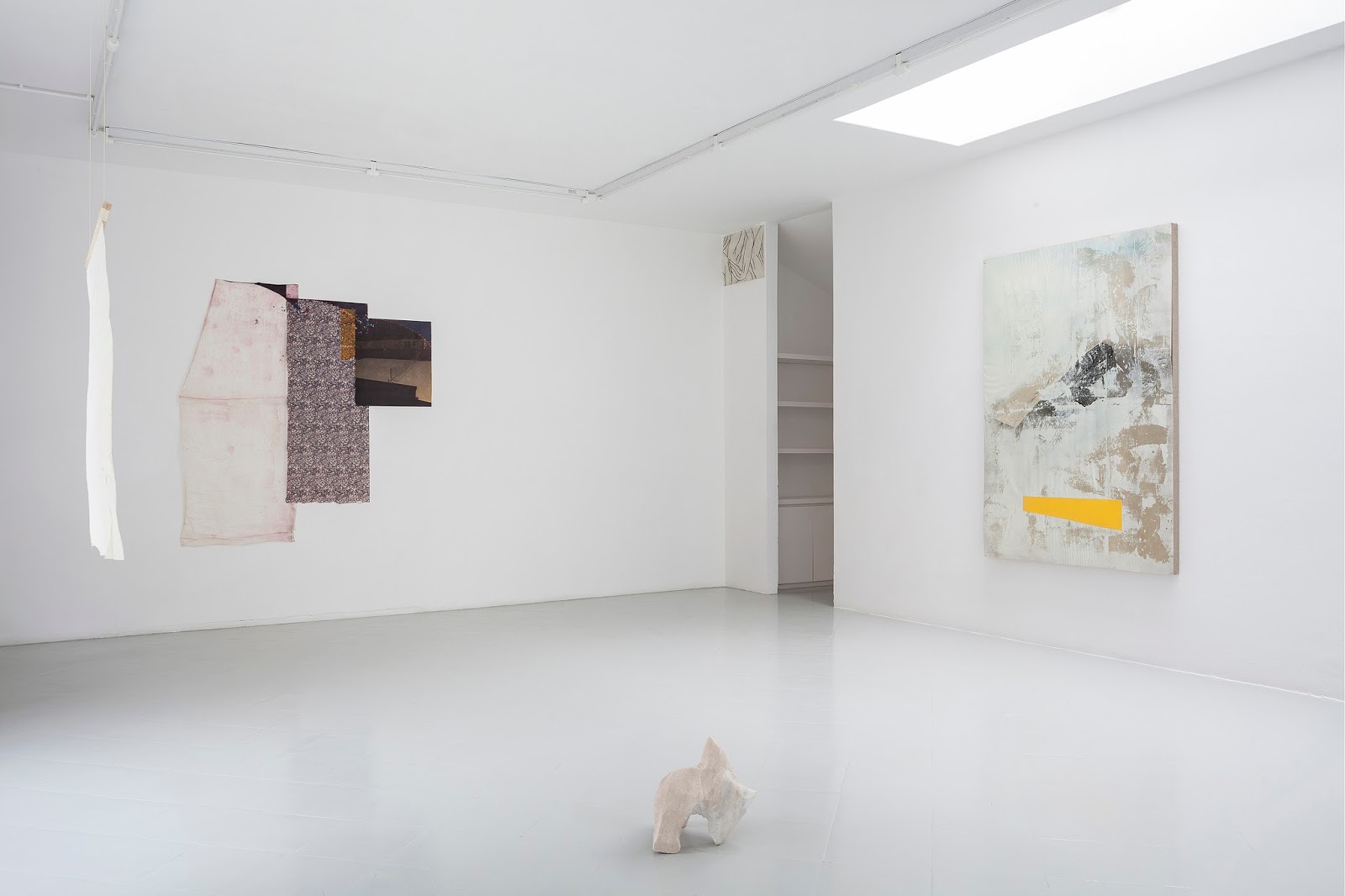 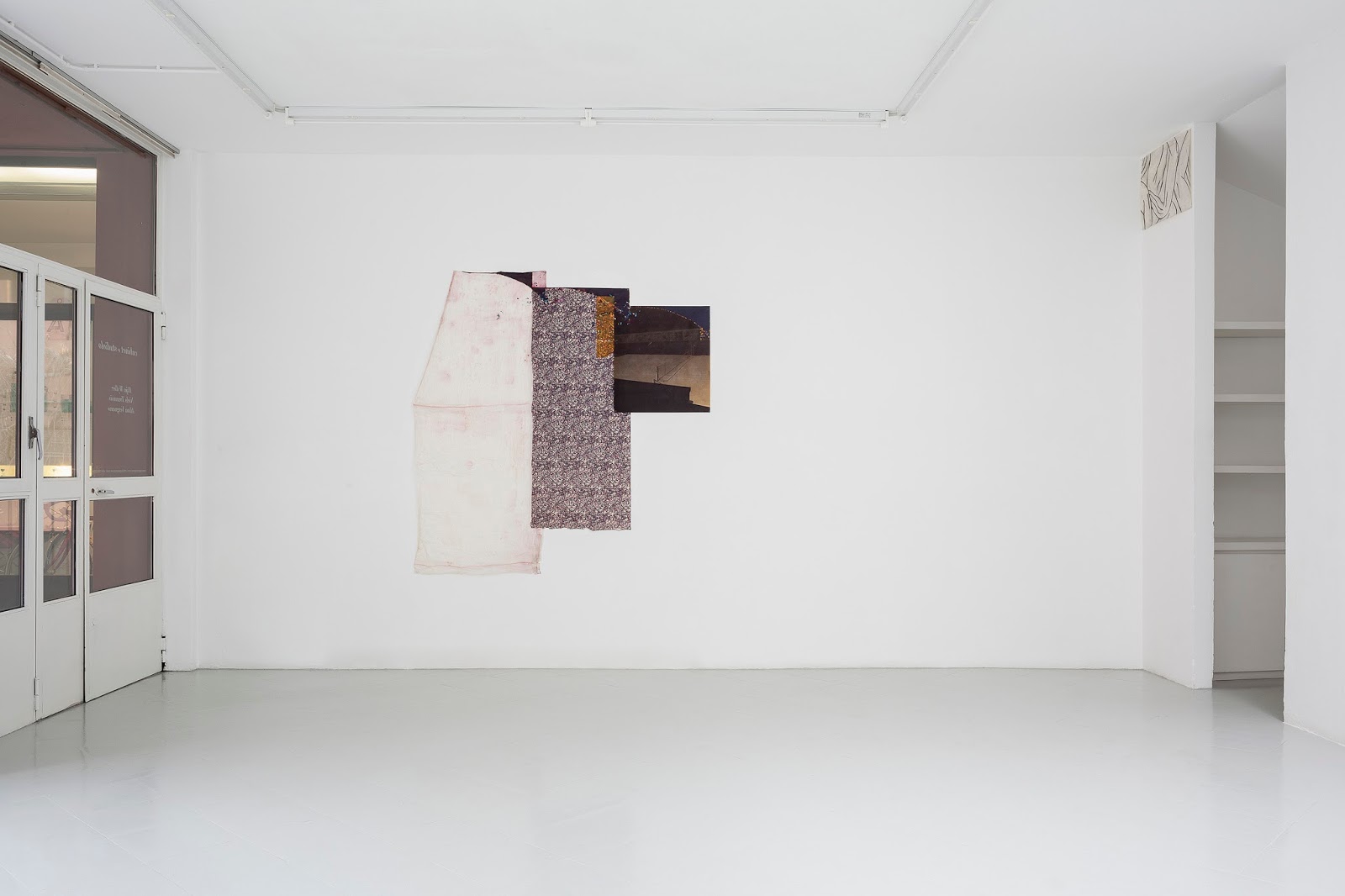 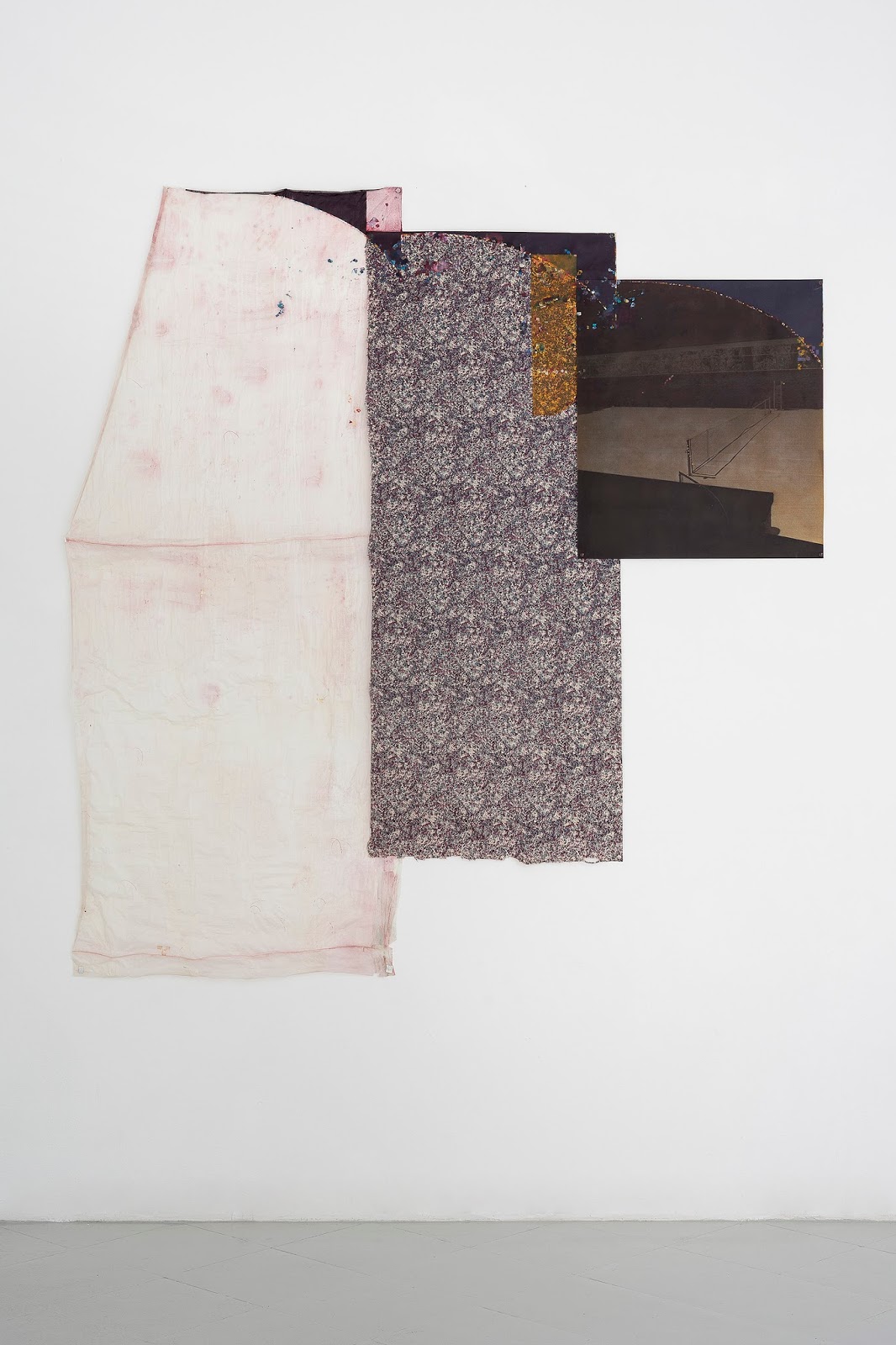 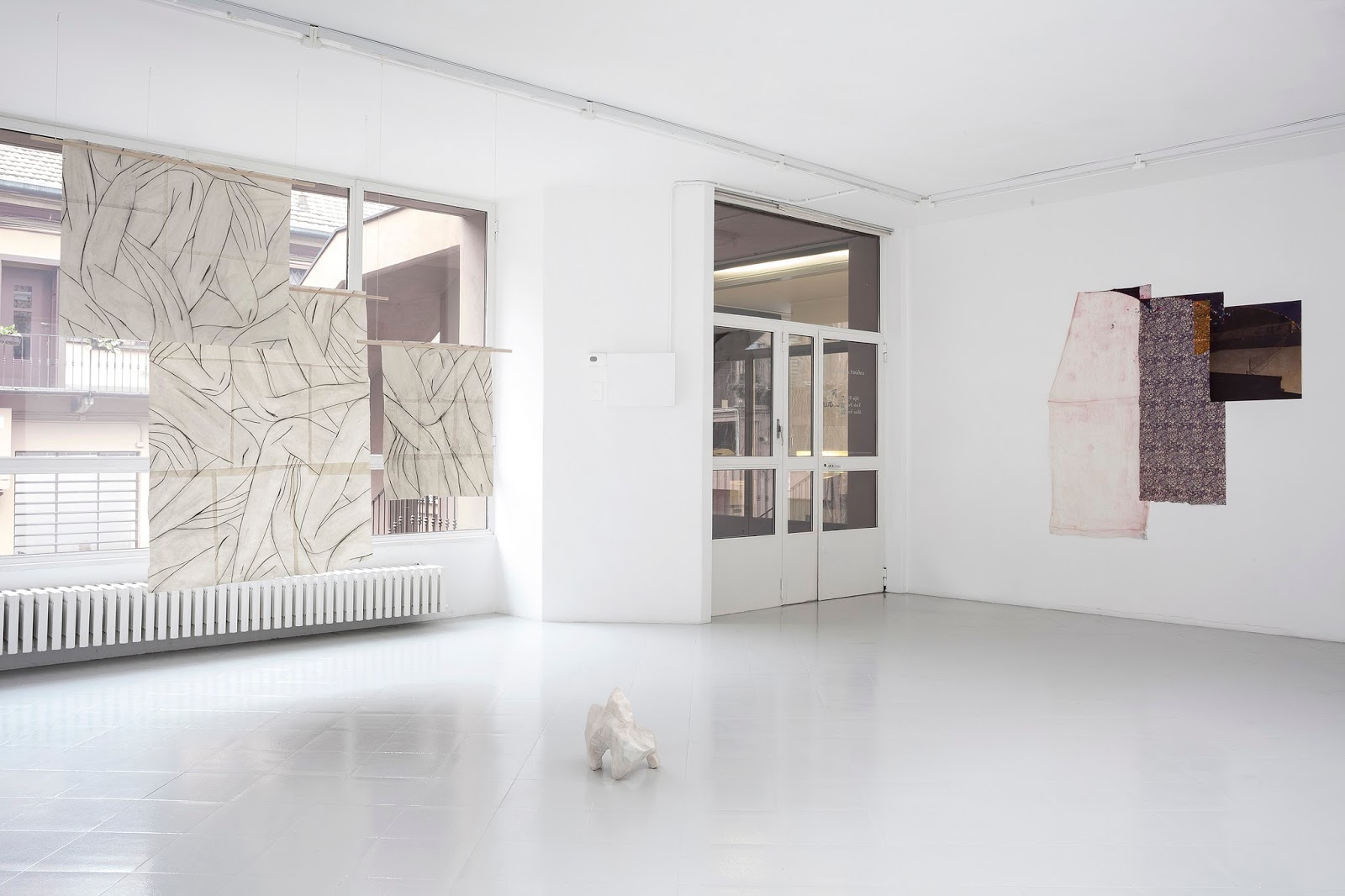 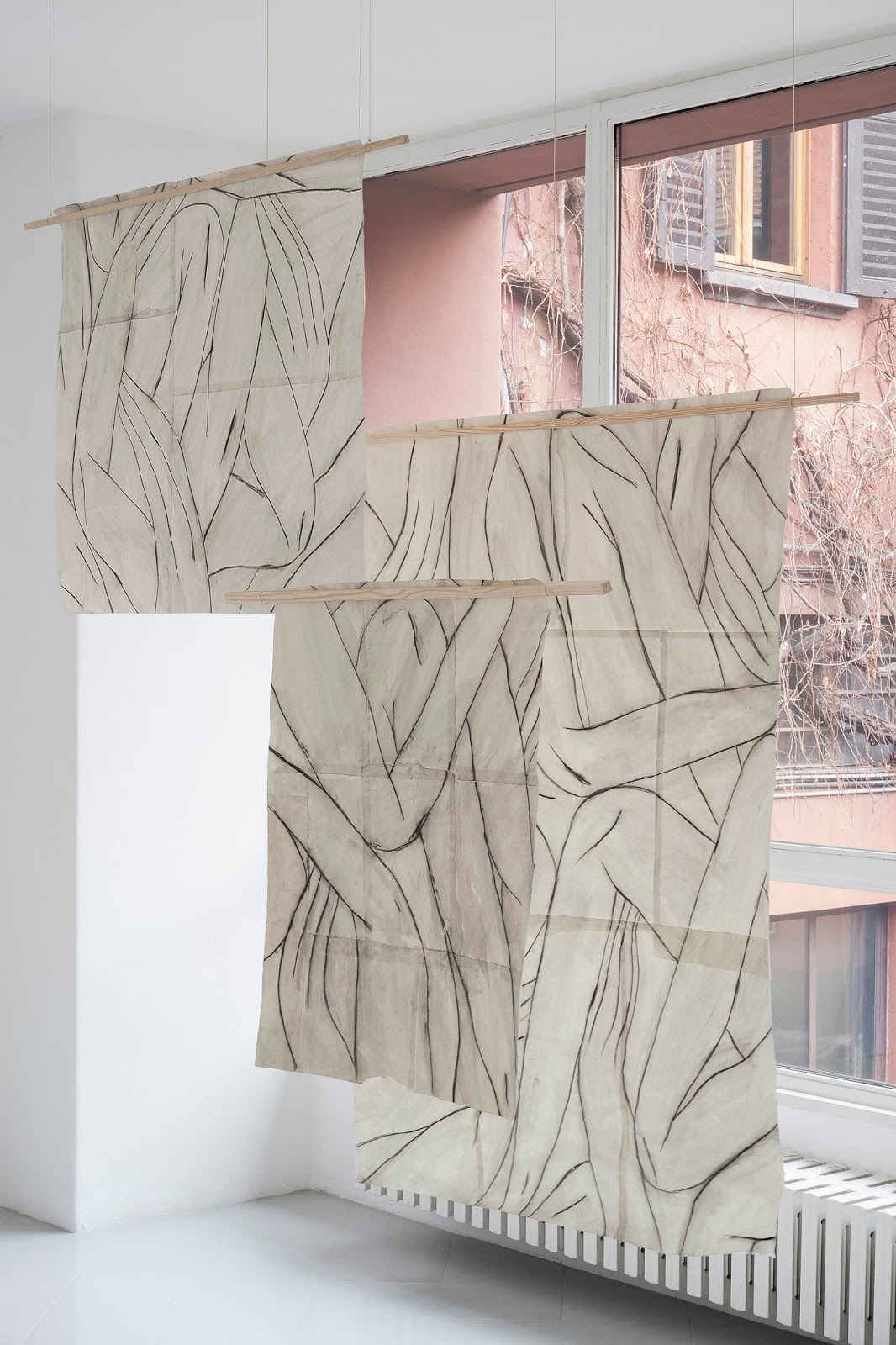 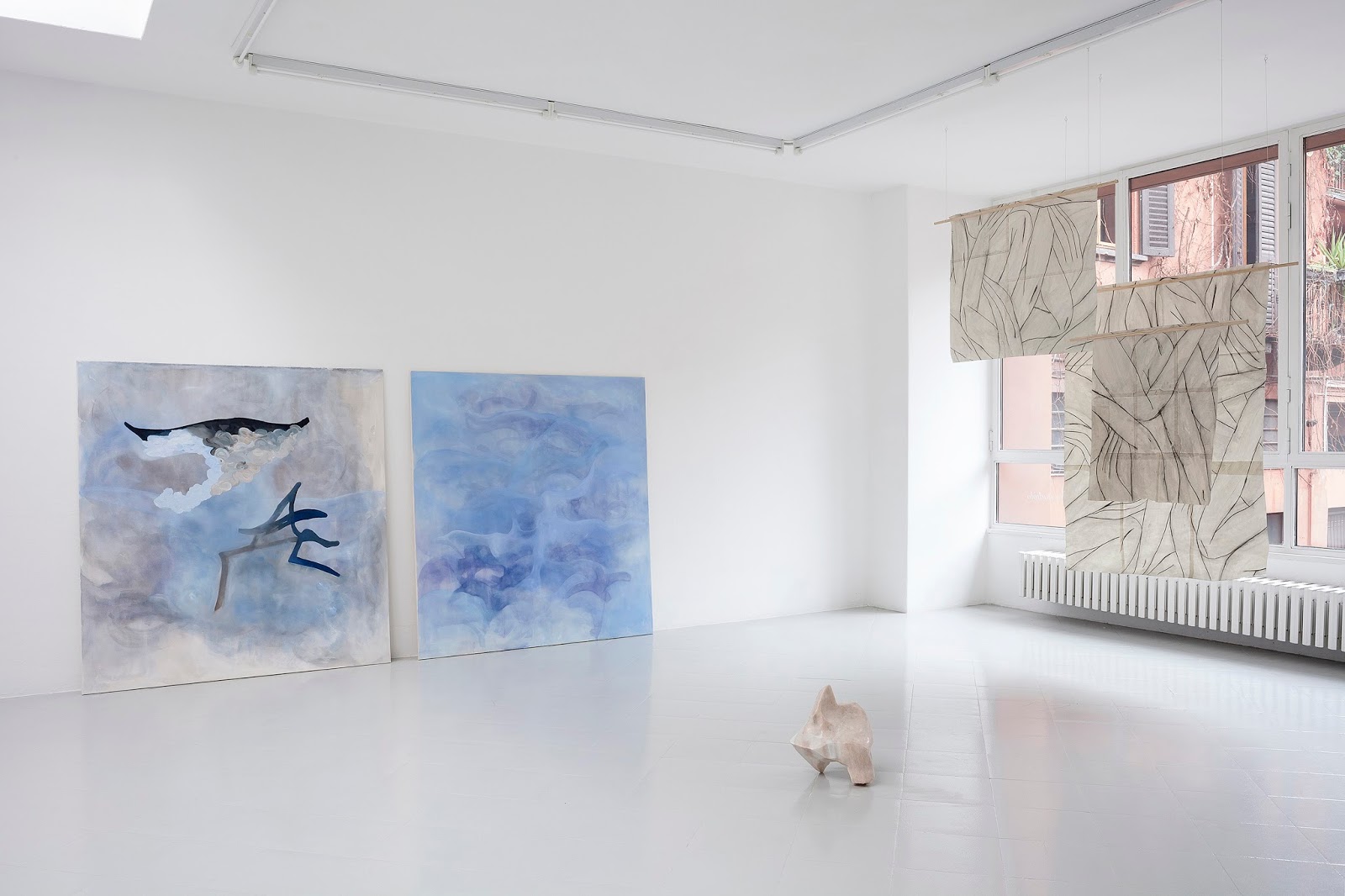 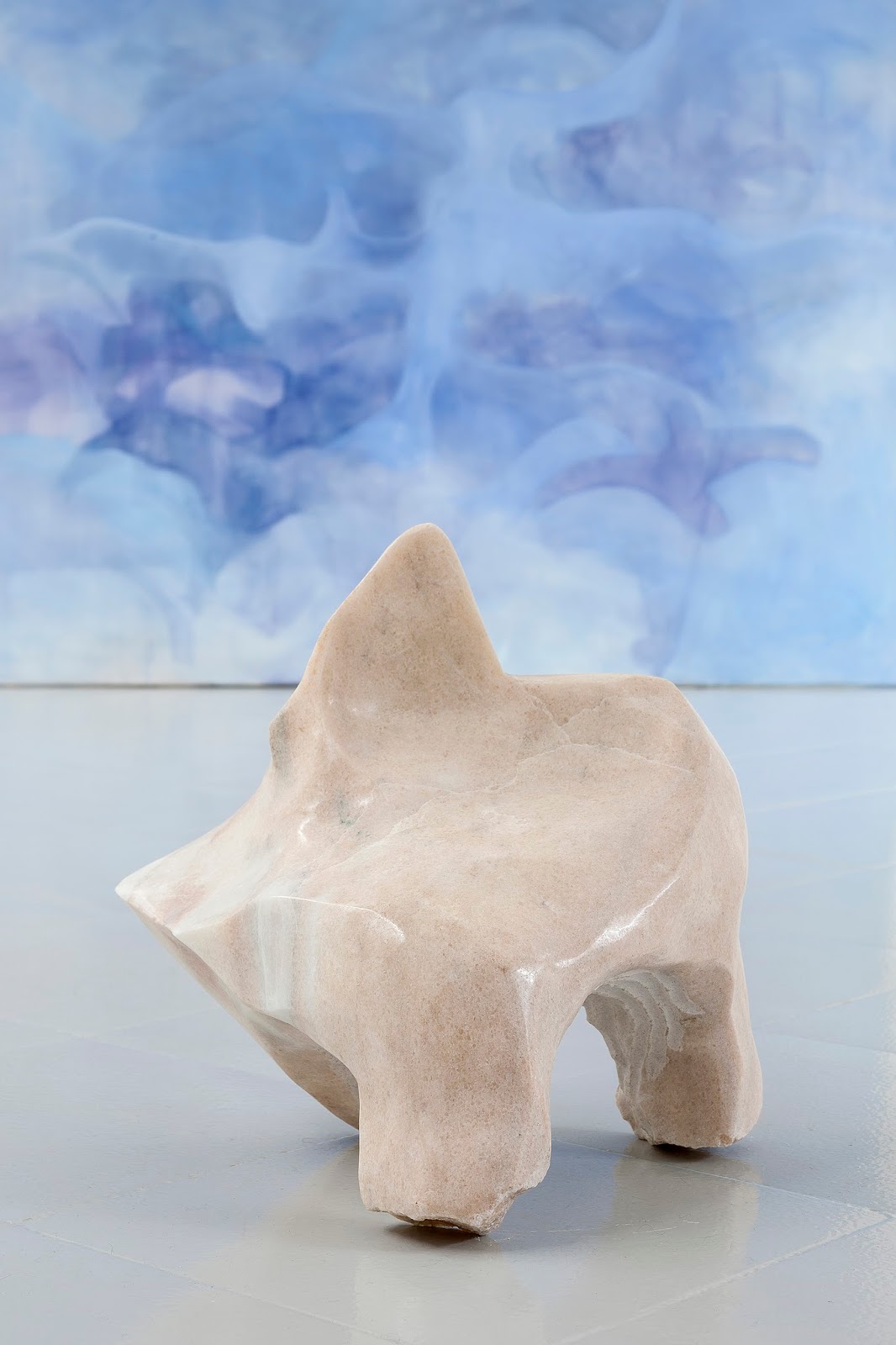 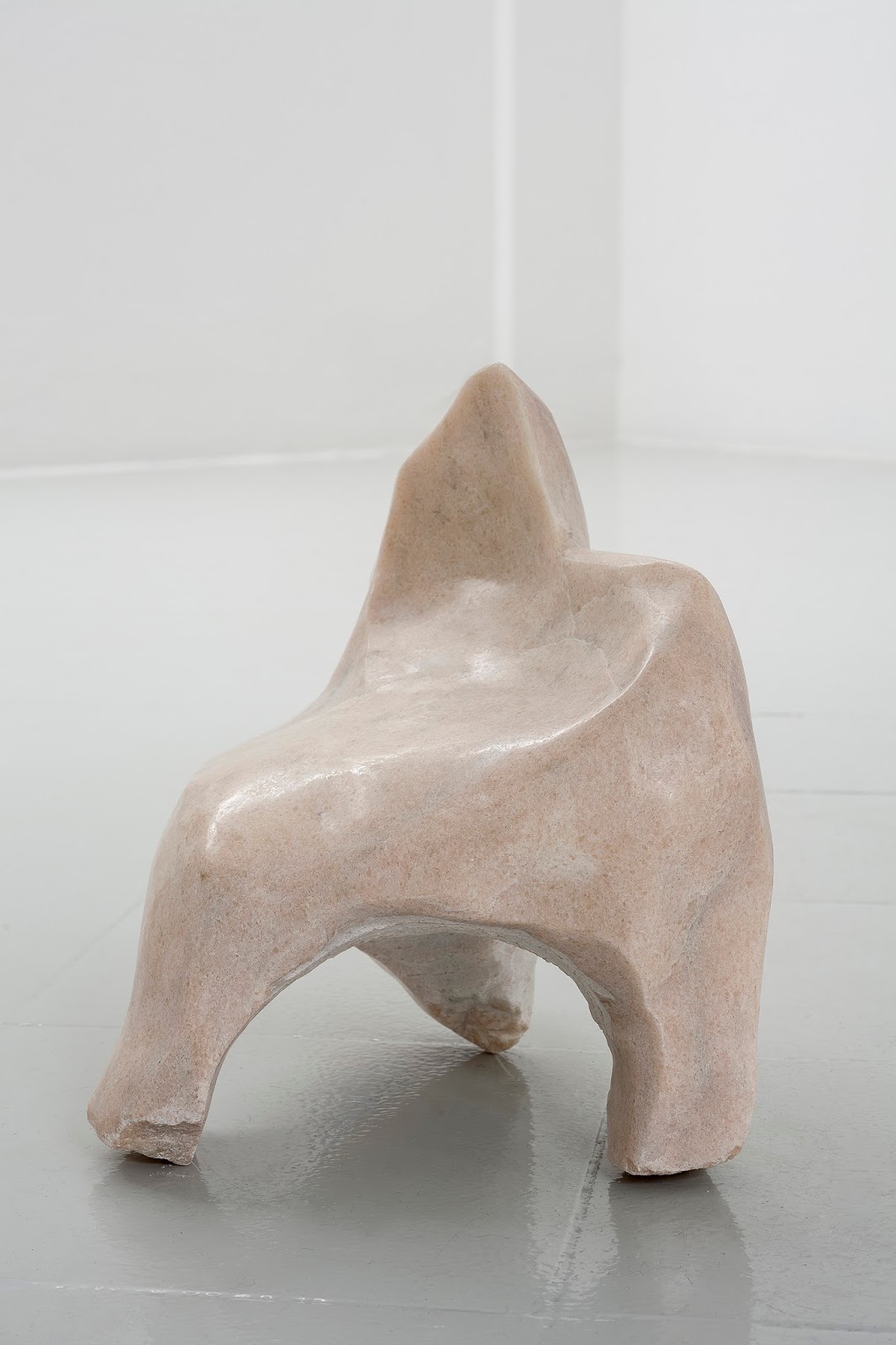 Modulated on the multiform declensions of painting, the exhibition starts off from pure drawing to then expand itself towards more all-encompassing forms such as the collage, the typographic monotype and the intervention on marble. The pictorial act, always lucidly released from any formal pressure, becomes for the three artists the transposition of their own experiential universe and the kaleidoscopic container of tireless mental associations; a flux of subjective and objective forms and concepts.

The executive rigour of Ilija Wyller, often characterised by chromatic experimentation, transforms itself into the informal research of landscape; a literary—more than geographic—panorama, which does not suggest places but rather imaginary and dreamlike spaces, aquatic and atmospheric condensations. For Studiolo she realises two large canvases of a different character but united by prof use work in the backgrounds, where the gesture has the function of giving colour a new value and suggesting mental associations that combine cosmology, social anthropology and chaos; an intellectual abstraction enriched also by the choice of titles in the form of poetry. The action shifts from the canvas to nature itself by the means of a small sculpture in pink Norwegian marble. Defined by rhythmic chiselling and concluded onto the surface with a superimposition of layers of pastel in wax, Wyller’s work bestows the inert with a new anamorphic and animal nature.

For Niels Trannois, too, the work of art operates like a time machine adept at satiating the historic amnesia surrounding some events dear to the artist. Every graphic superimposition, never casual, is part of a weave of memories allowed to emerge thanks to a complex compositional layout. On show are recent works such as “Dolores del Rio (From Liberty to Brainfeeder)”, which do not betray his current poetic research; in this tapestry work, the superimposition of three layers—a painting on white silk, a liberty fabric and a Xerox printing illustrating a tennis field—recounts the life of Dolores del Rio, famous Mexican actress of silent cinema from the 20s and 30s, who Trannois seeks to restore to collective memory. His practice emerges also in “B. (Hands in a Chinese cookie jar)”, a large tapestry mounted on a wooden box in which interventions in oil, monotypic printing and collage co-exist.

That which brings Alina Vergnano to painting is her preparatory state. What appears to be sinopia are in fact large paper collages, which,juxtaposed, define a multi-faceted texture on which lie signs in graphite that describe bodies, hands, arms, legs, without ever revealing physiognomies; livid intersections, played on the natural bichrome of utilised materials and enriched only from the palpability of the paper and the traces of afterthoughts. At Studiolo she chooses to compare herself with Wyller and Trannois through the work “Within”, a suspended composition composed of three drawings of different dimensions and mounted on a series of thin sticks that, exploiting the superimposed area of the papers, emphasise the physical mixture and ideological fragmentation of the subject.