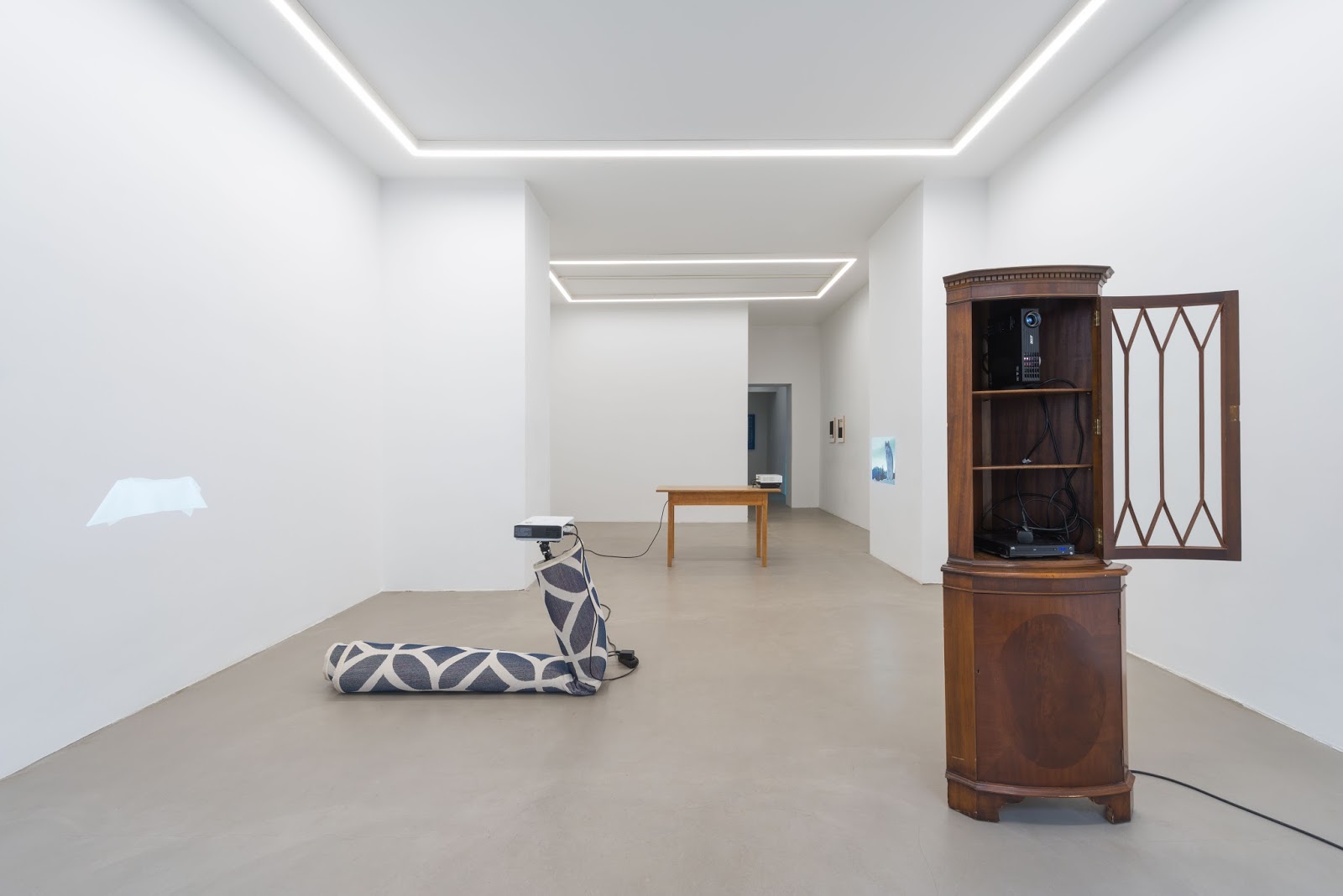 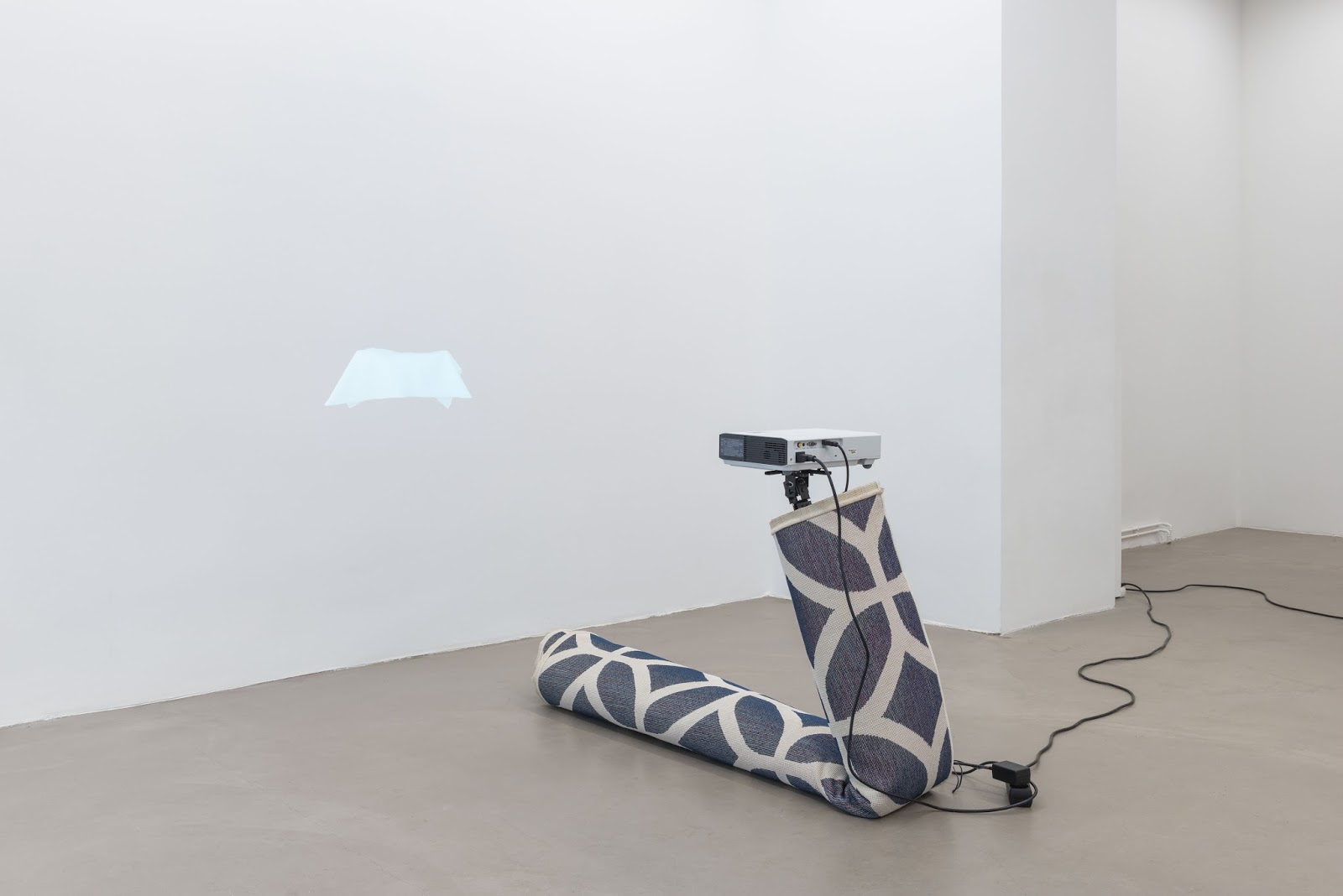 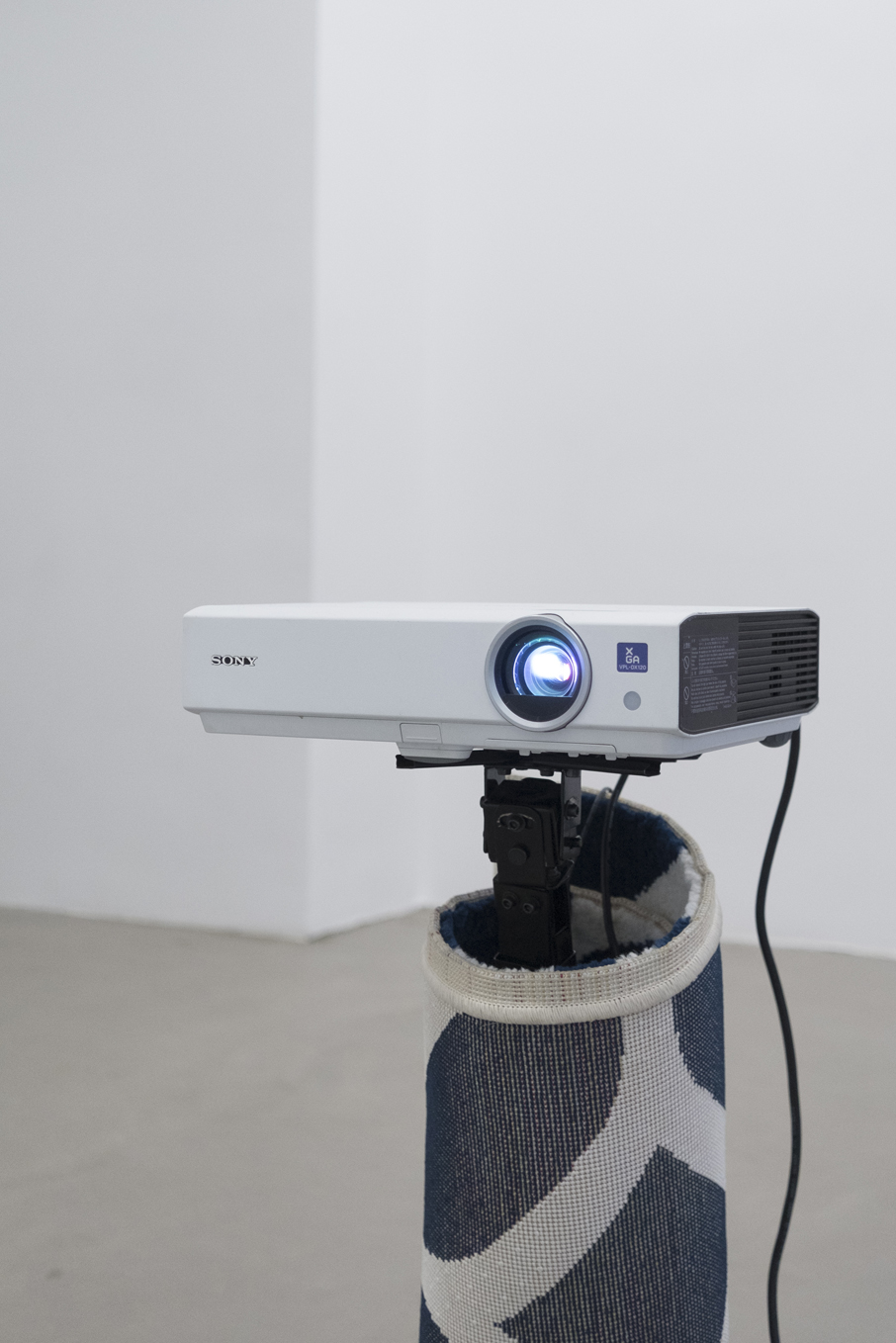 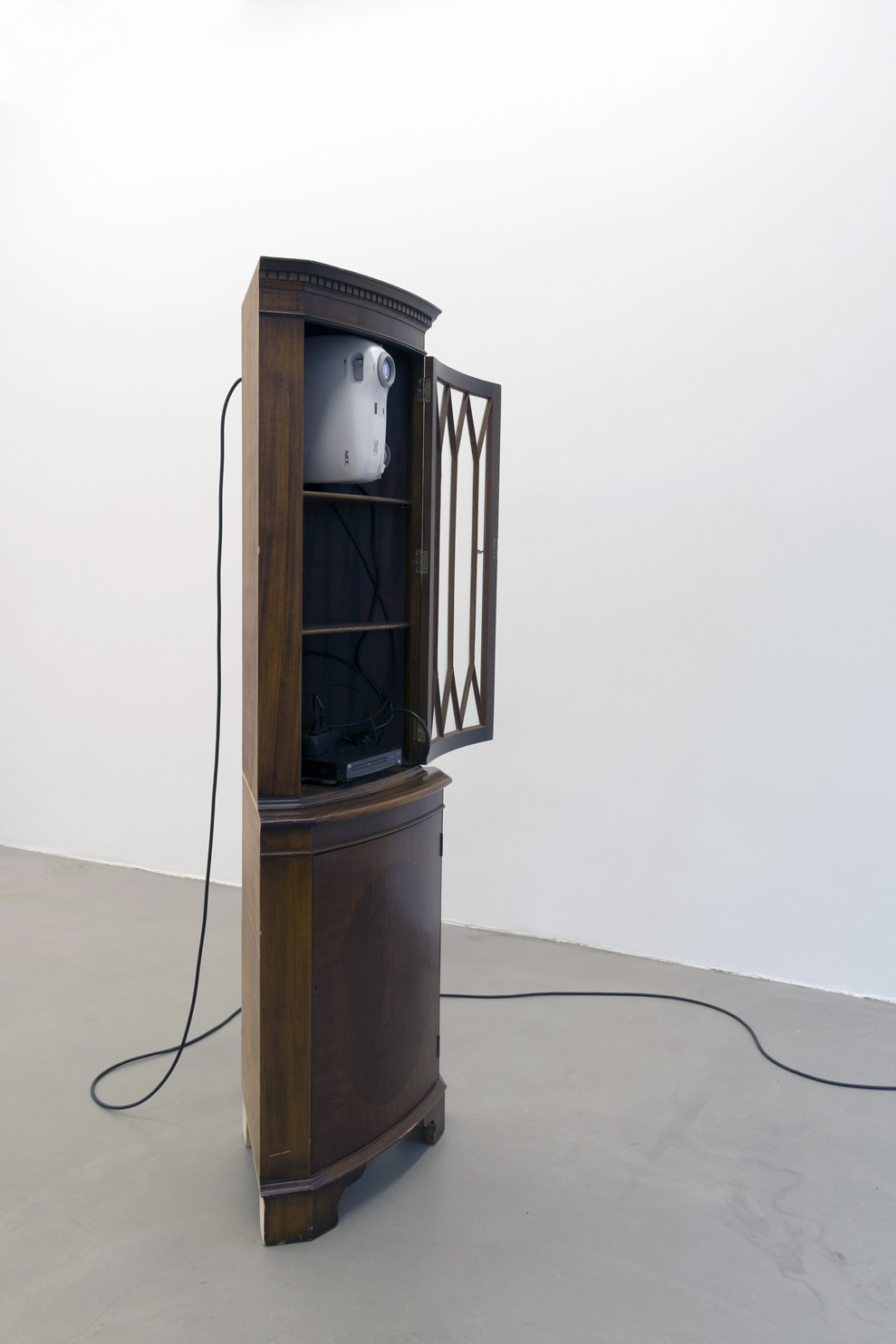 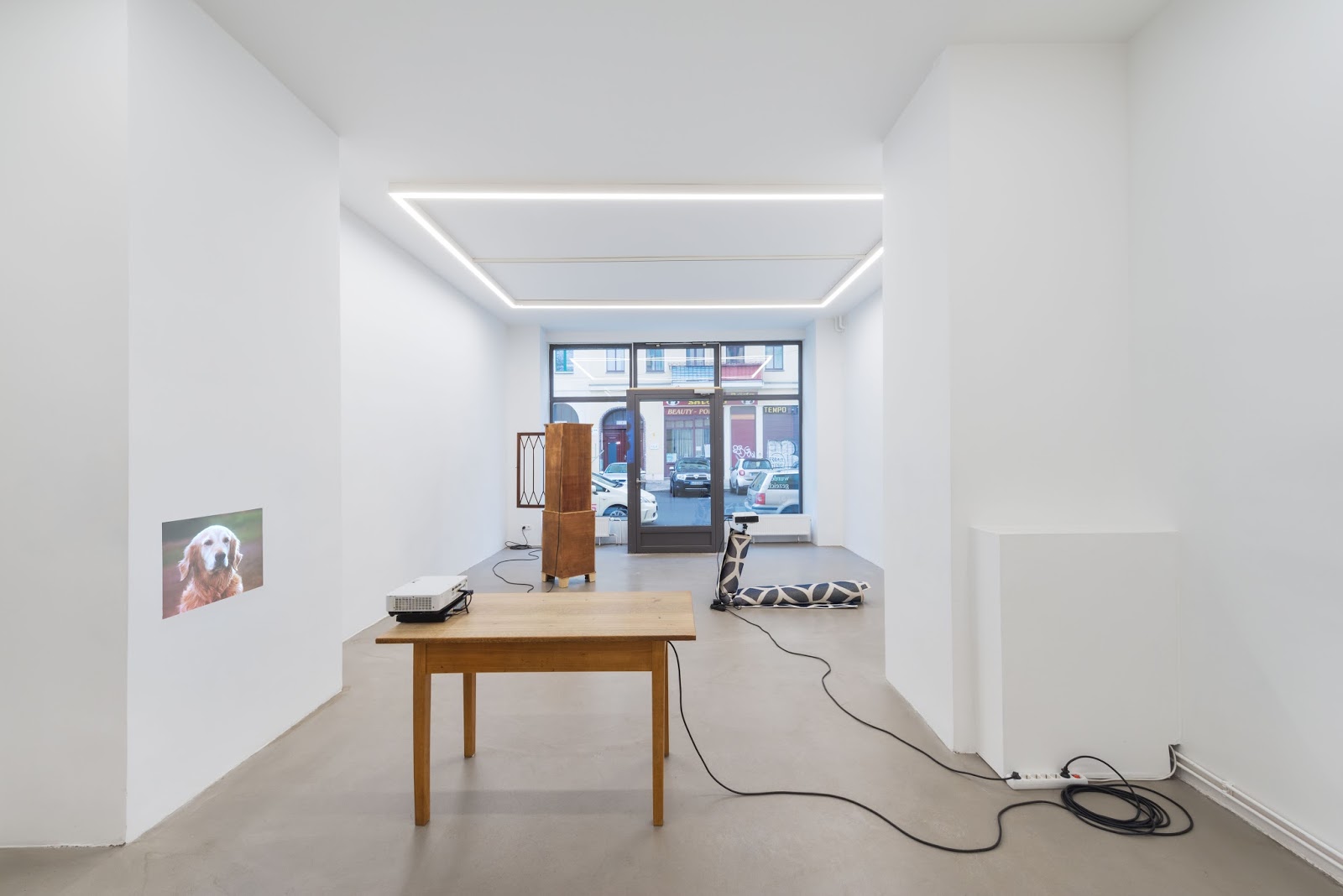 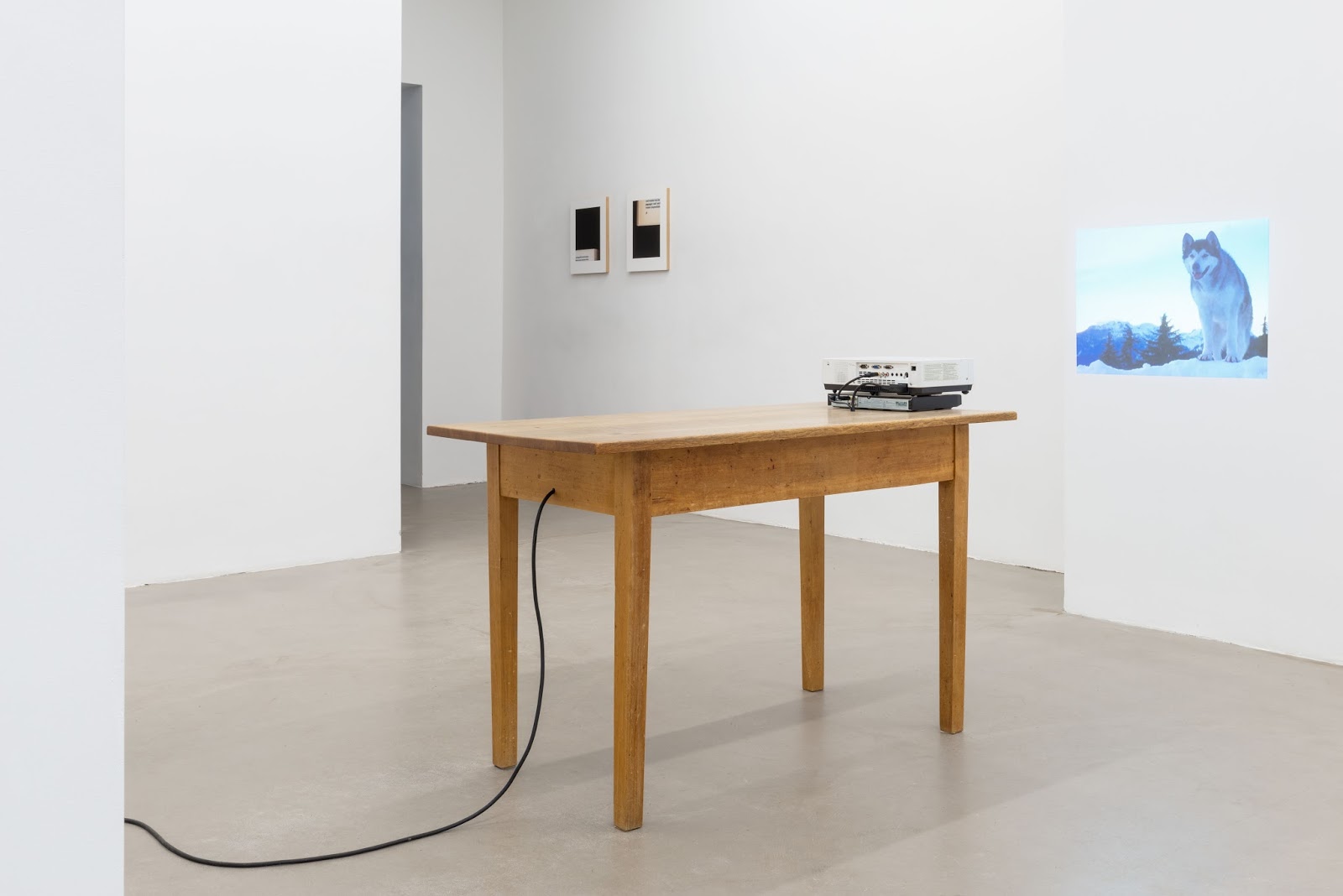 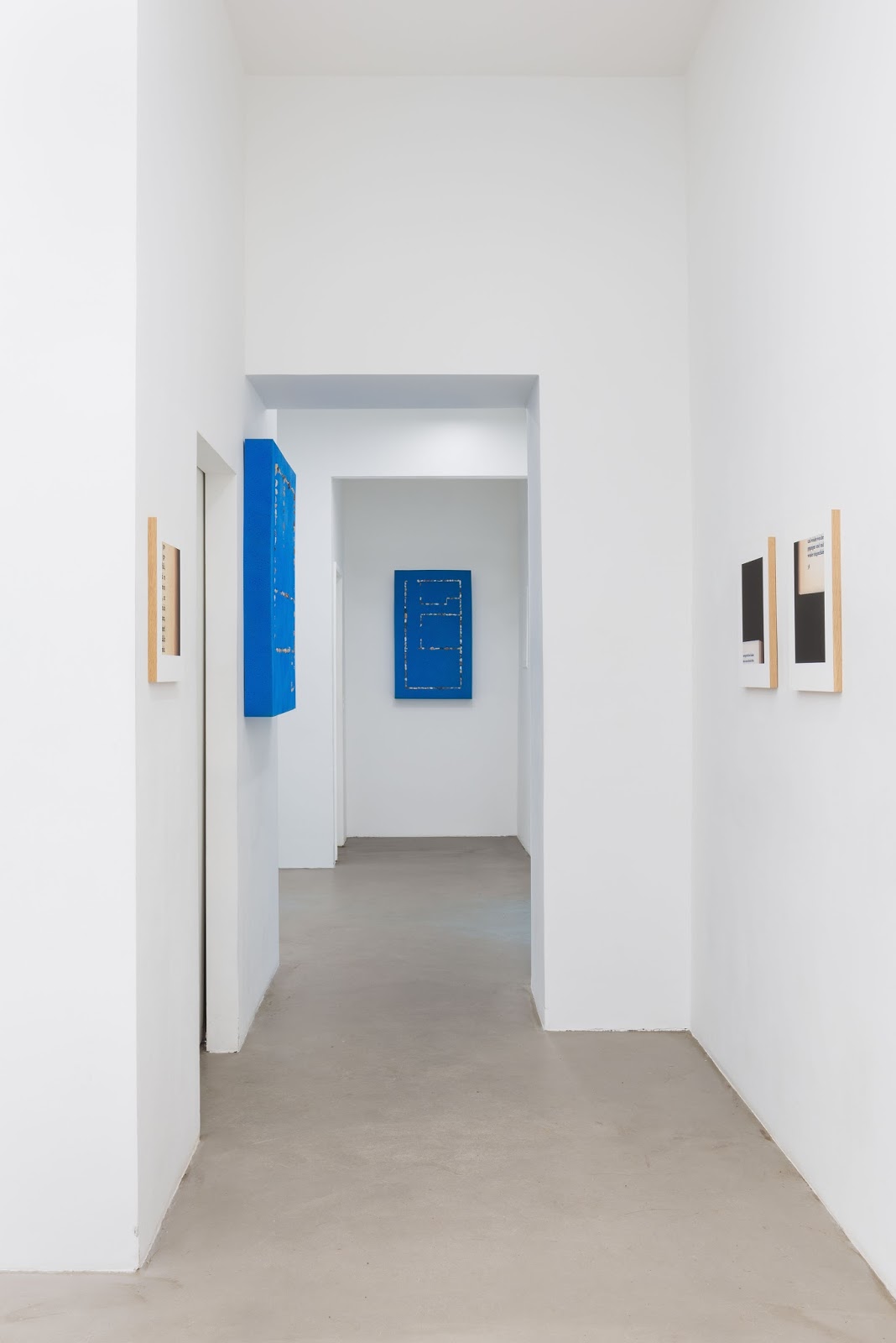 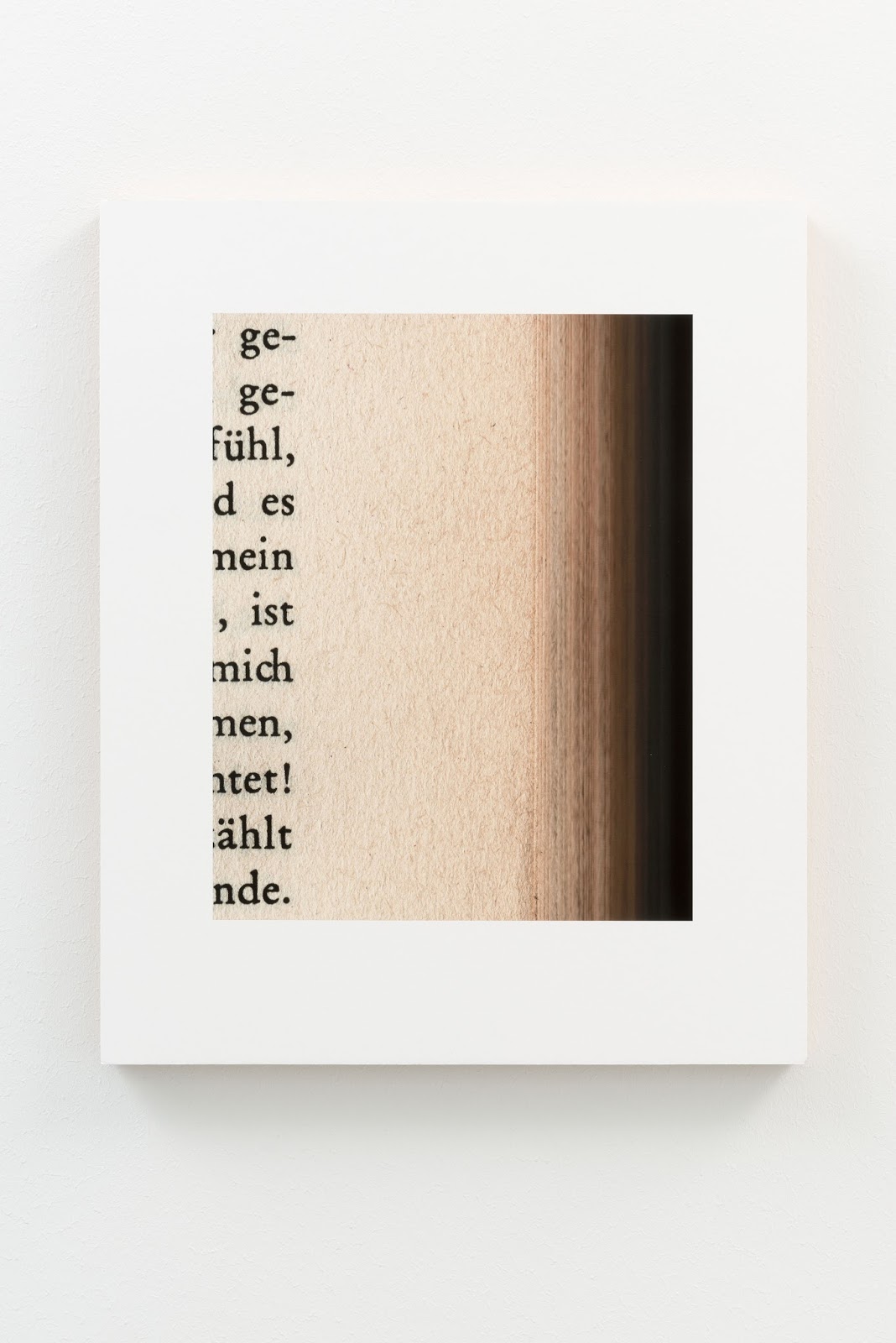 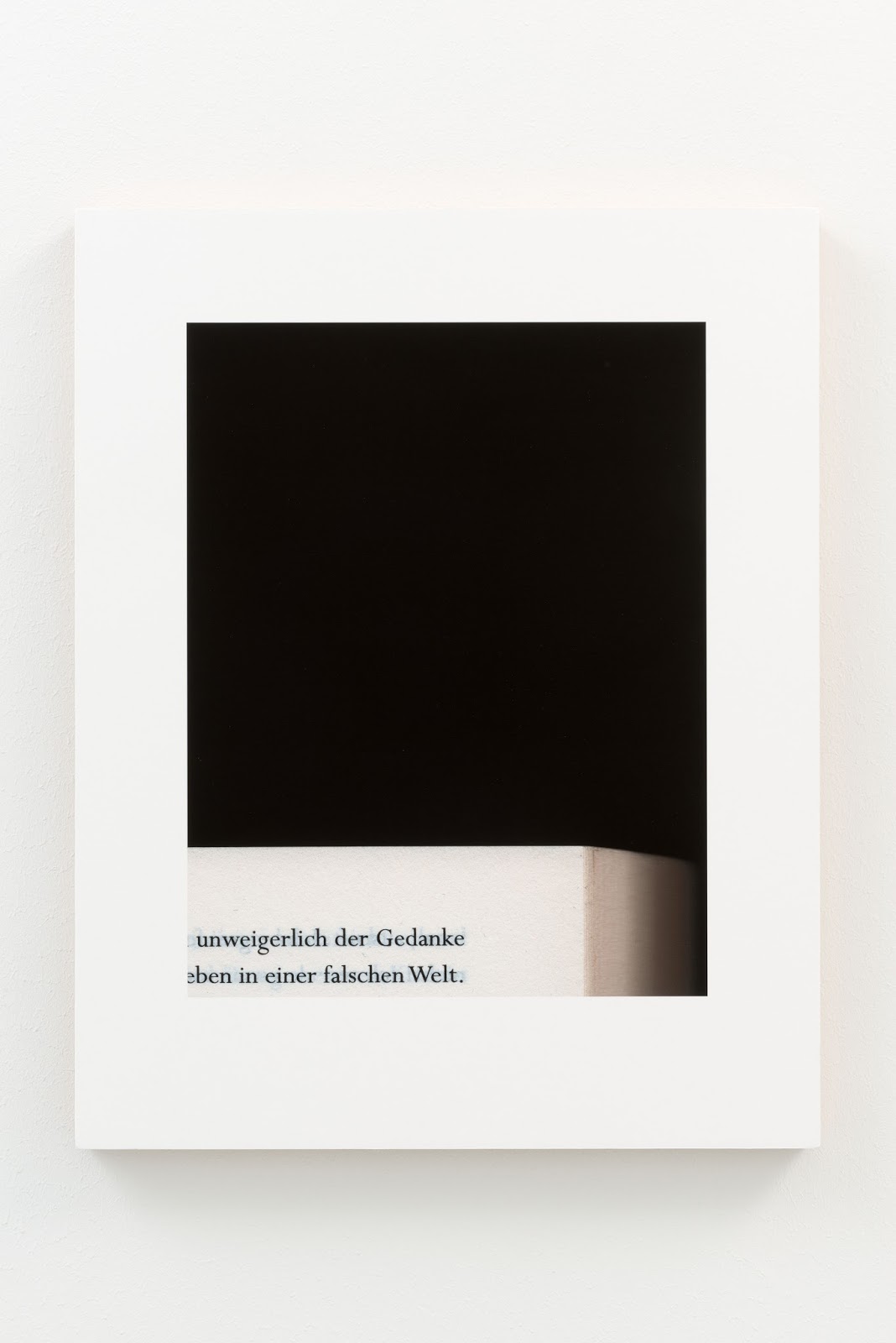 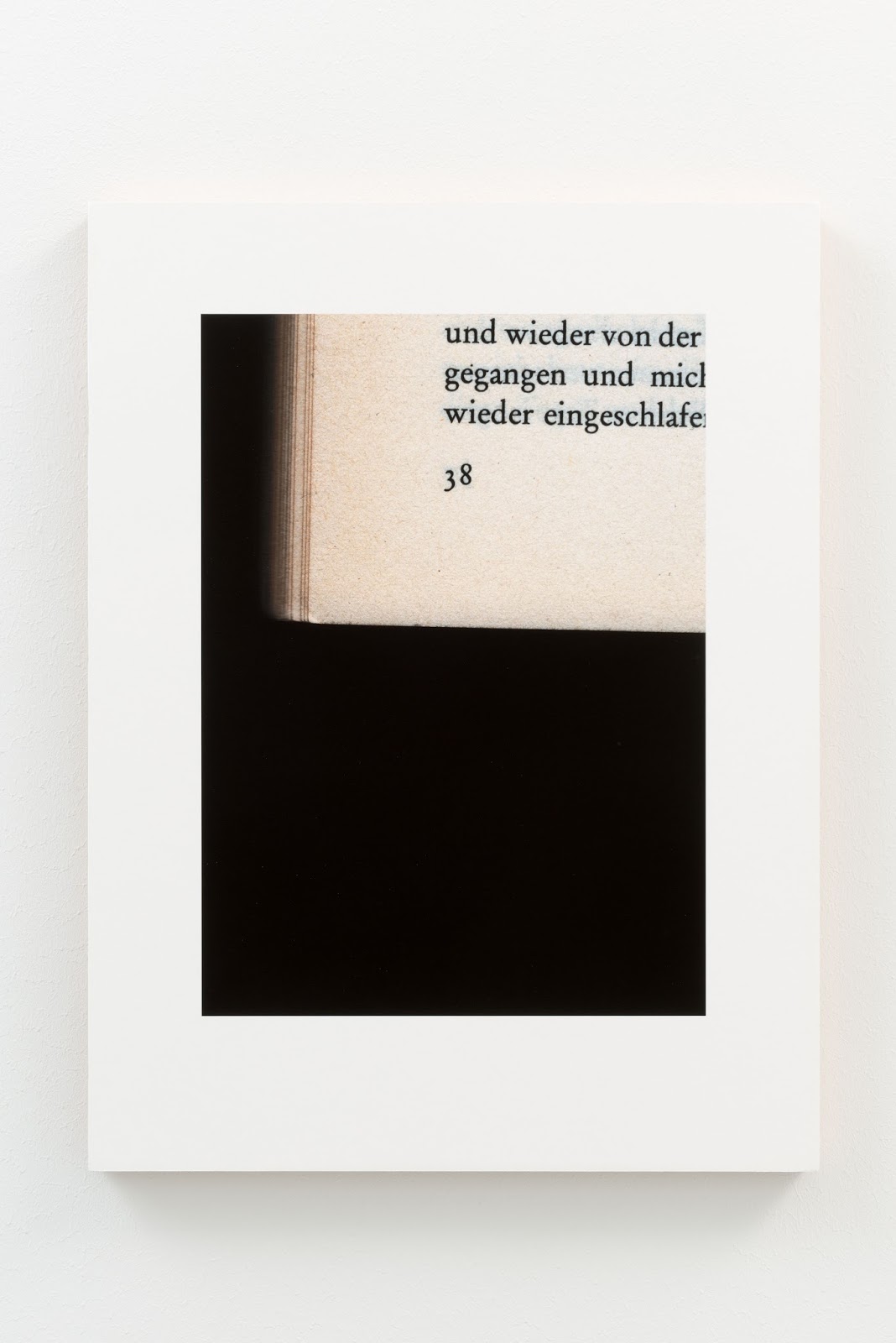 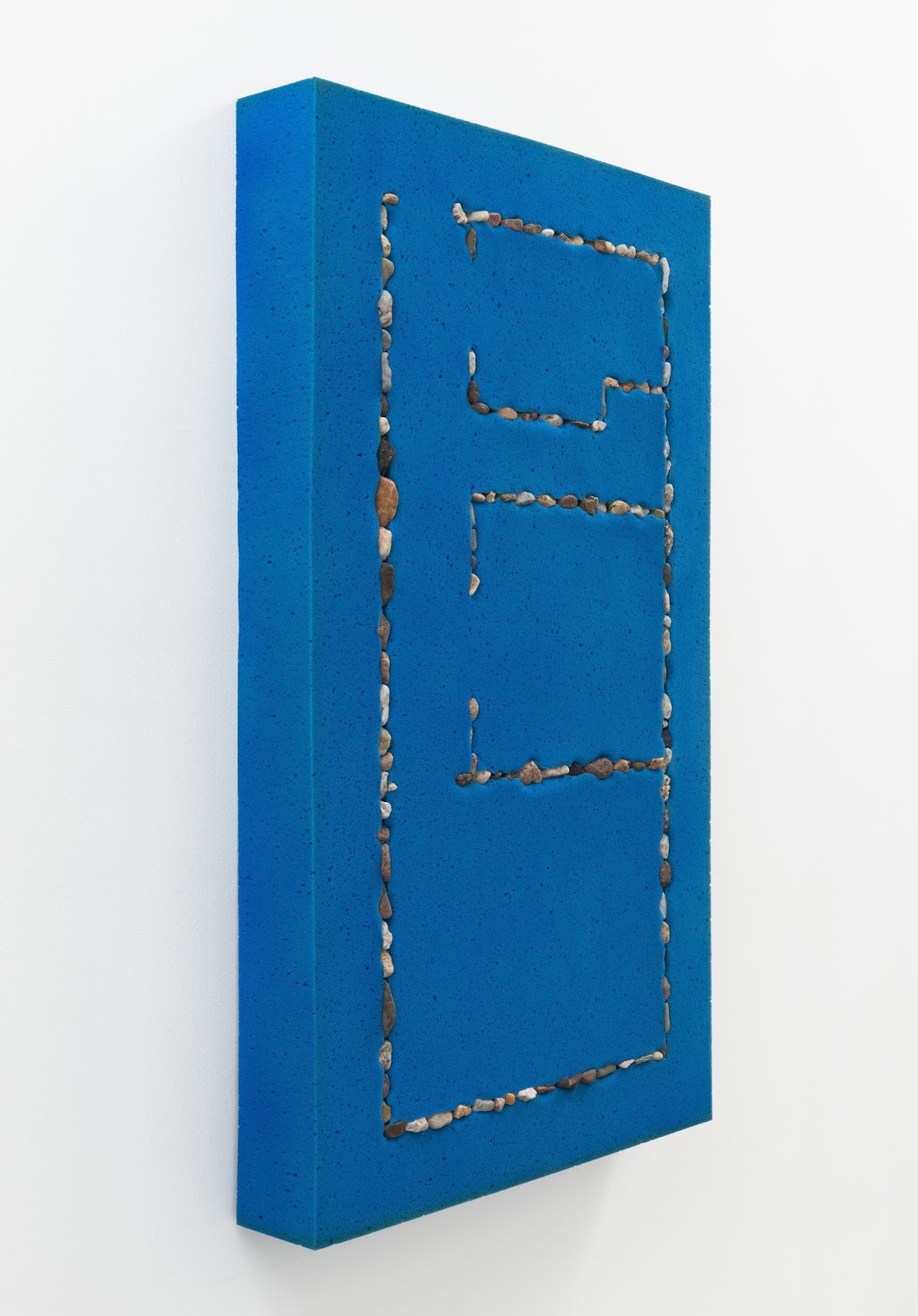 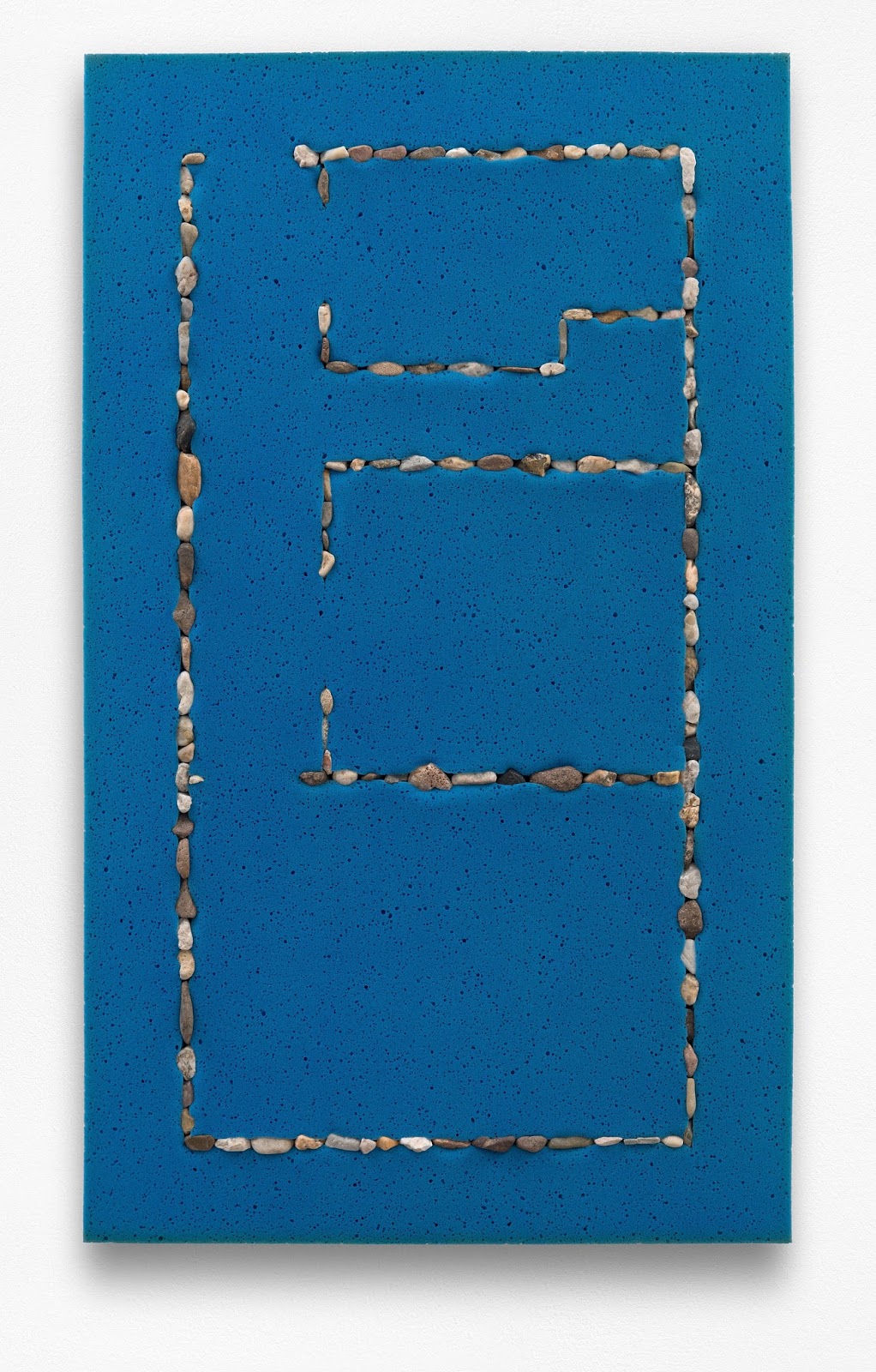 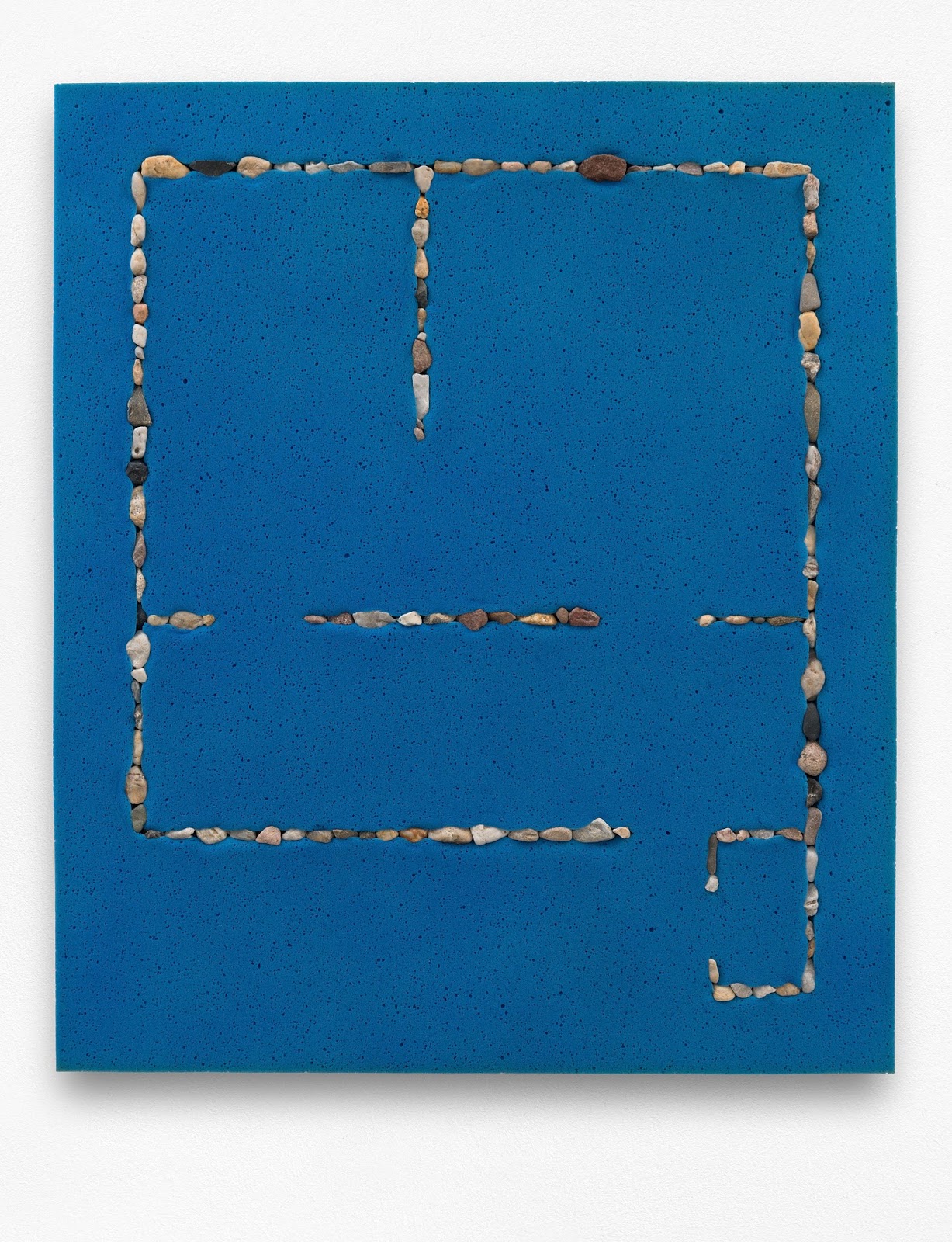 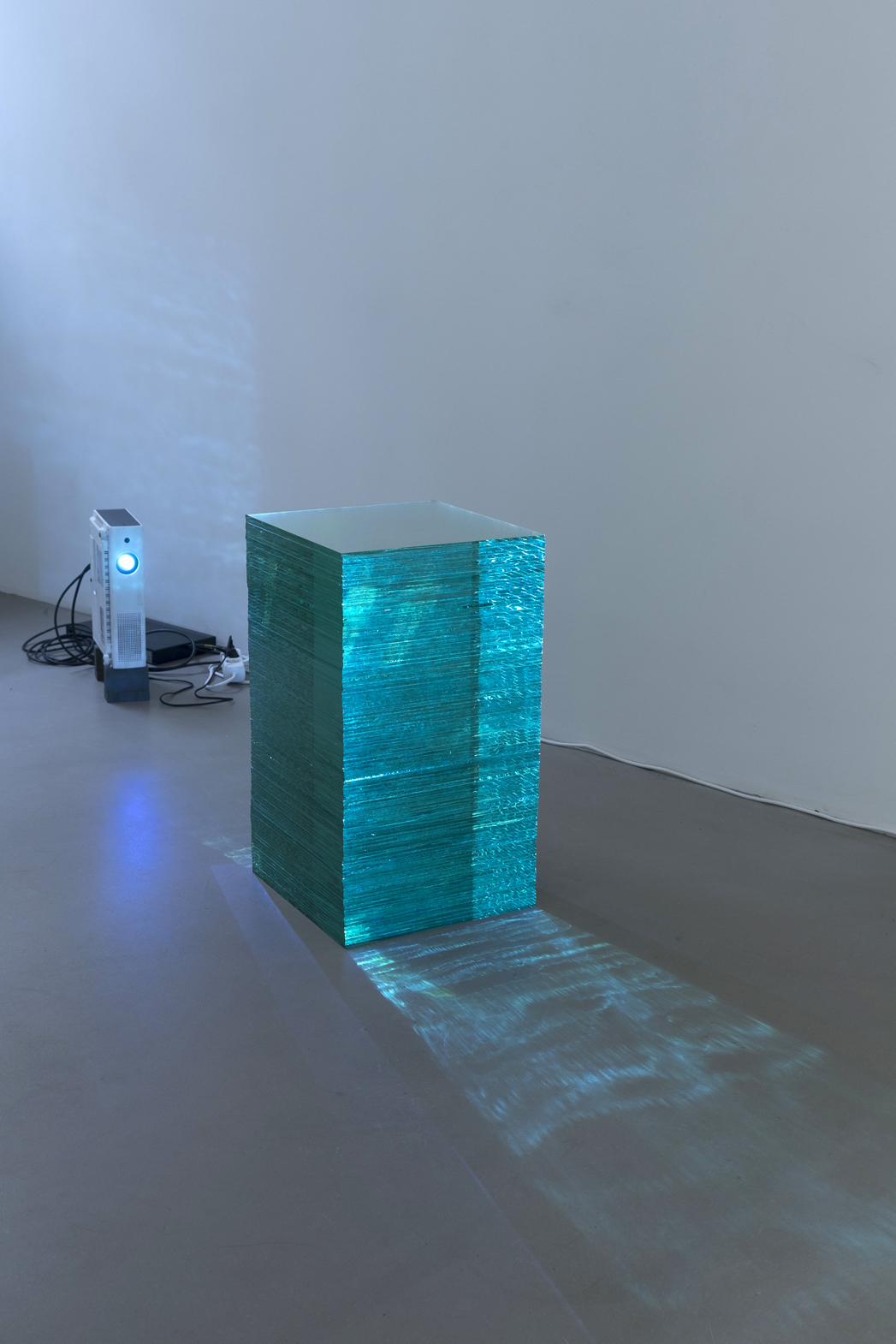 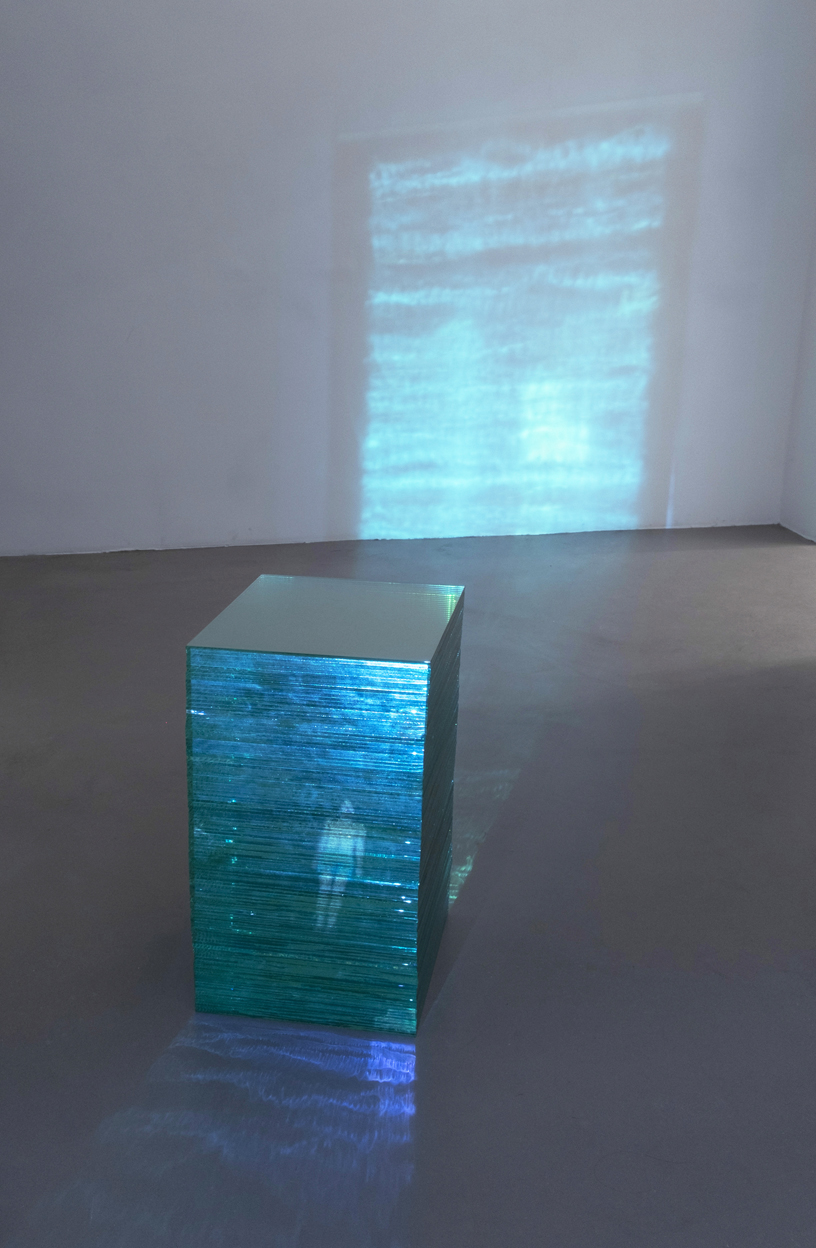 In the centre of Konrad Mühe’s first solo exhibition at the gallery Russi Klenner, which is enigmatically entitled “Your smile was drawn”, there is an installation.
This peculiar interior is inhabited by three characters: the first one is a rolled up and bended carpet with a video projector attached to its “trunk”, which is sitting like a figure on the floor. The corresponding projection, a white rectangle, which slowly subsides to the back (from a room perspective view), shows a stretched sheet, which wraps up an undefined object with drapery. The second character is a table. At its head a projector projects in a quick sequence a compilation of glances of different dogs taken from feature films. These glances are added in such a way that the dogs seem to alternately look around the room at the projector or the observer. Here again, the table can be interpreted as the dog’s body and the projector as the head. The third and maybe most enigmatic protagonist of the ensemble is a corner cabinet placed in the centre of the room, from which a feature film is being projected. However, only faint shadows can be seen of it. The almost immaterial quality of this projection is solely defined by the way of the light into the void. All videos of the installation are shown in a loop and without sound. They seem to be verbal (even though mute) expressions of the characters. At the same time, they are also being observed by the characters. Being an observer of this scenery, one becomes witness to a self-reflexive contemplation, but through the glances of the dogs one is also being incorporated into what is happening. All this reflects a certain gloomy humour – the futile attempt to take on a role and to position and articulate oneself adequately.
In the mural reliefs apartment M, apartment G floor plans of apartments Mühe once lived in, are being reproduced in an exemplary manner. For this purpose, stones were pressed into coloured sponge material. This vague sketching of clear lines with irregular stones in this soft, absorbing material contradicts the precision of an architectural drawing. It is more about a fundamental need of a confined protected space that can be imagined and whose provisional nature or even permeability one is perfectly aware of.
In the second room a video installation is being combined with a series of prints. In Avalanche the artist is being carried by the water of a river like a piece of driftwood, remaining stoically in this position even when coming across obstacles such as stones in the shallow river bed. Four variations of the same situation, the appearance and disappearance of the figure from the (vertical) image detail are being projected onto a cube made of stacked glass plates. We are observing a body being under the influence of external conditions, just like in a physical series of tests.
The series of prints Gesang in finsteren Wäldern (Song in dark forests) is based on novels that are of special importance to Mühe – by visualising only fragments of texts from the margins of the book pages an alternative narration evolves, which captures atmospheric moments in a poetic compression. The formal rigour of the work, playing with the volume of the book, with the depth of the image space, the materiality and transparency of the book pages thereby creates an intriguing contrast to the apparent pathos of the title.
The title of the exhibition Dein Lächeln wurde gezeichnet implies different interpretations and associations, such as being marked or recording, and leaves open to whom or what the statement is addressed. In Mühe’s work displays are always understood as an integral part of the work, they are cautious psychological miniatures that are able to maintain a certain emotional distance through their conceptual consistency.