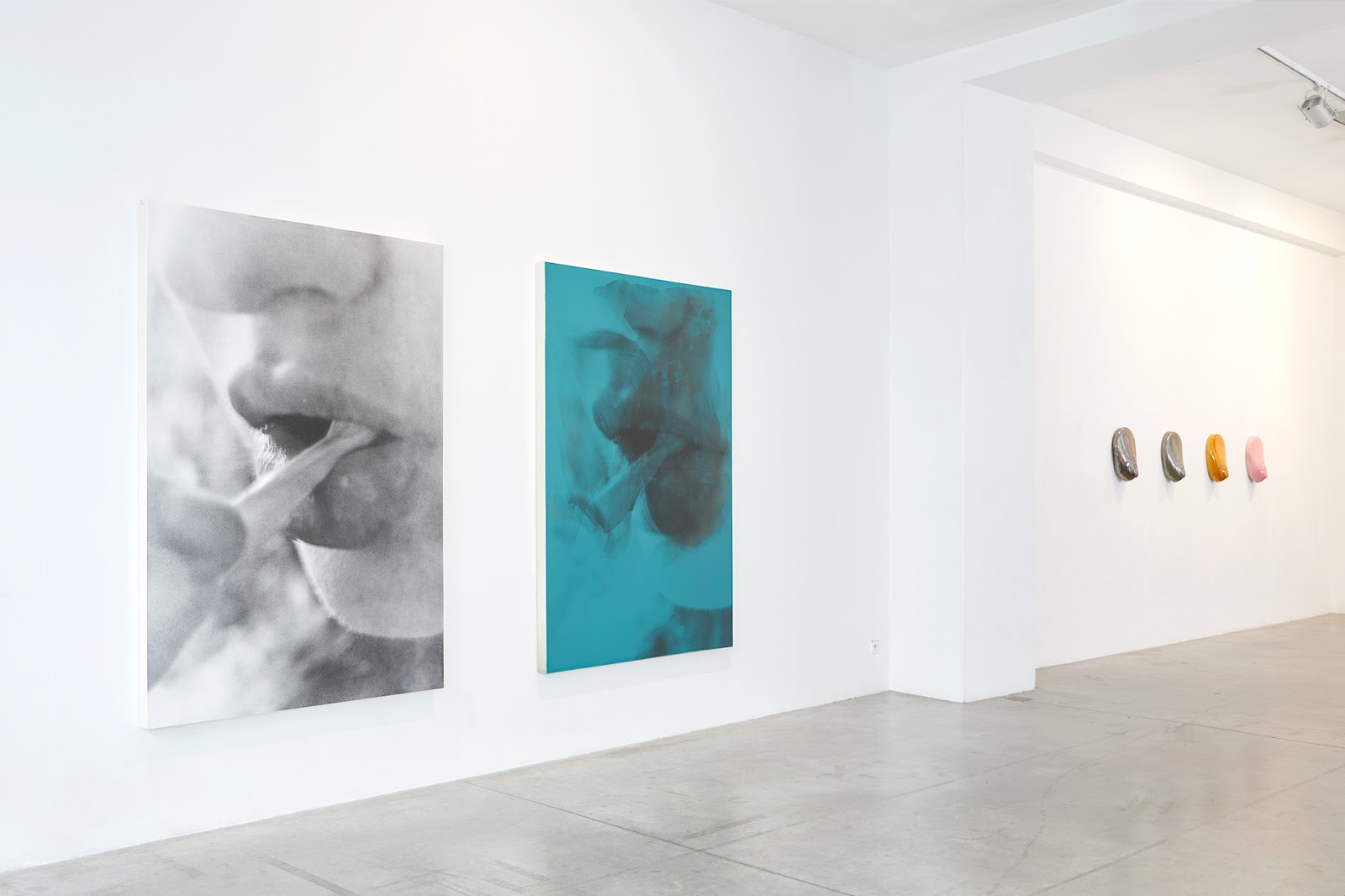 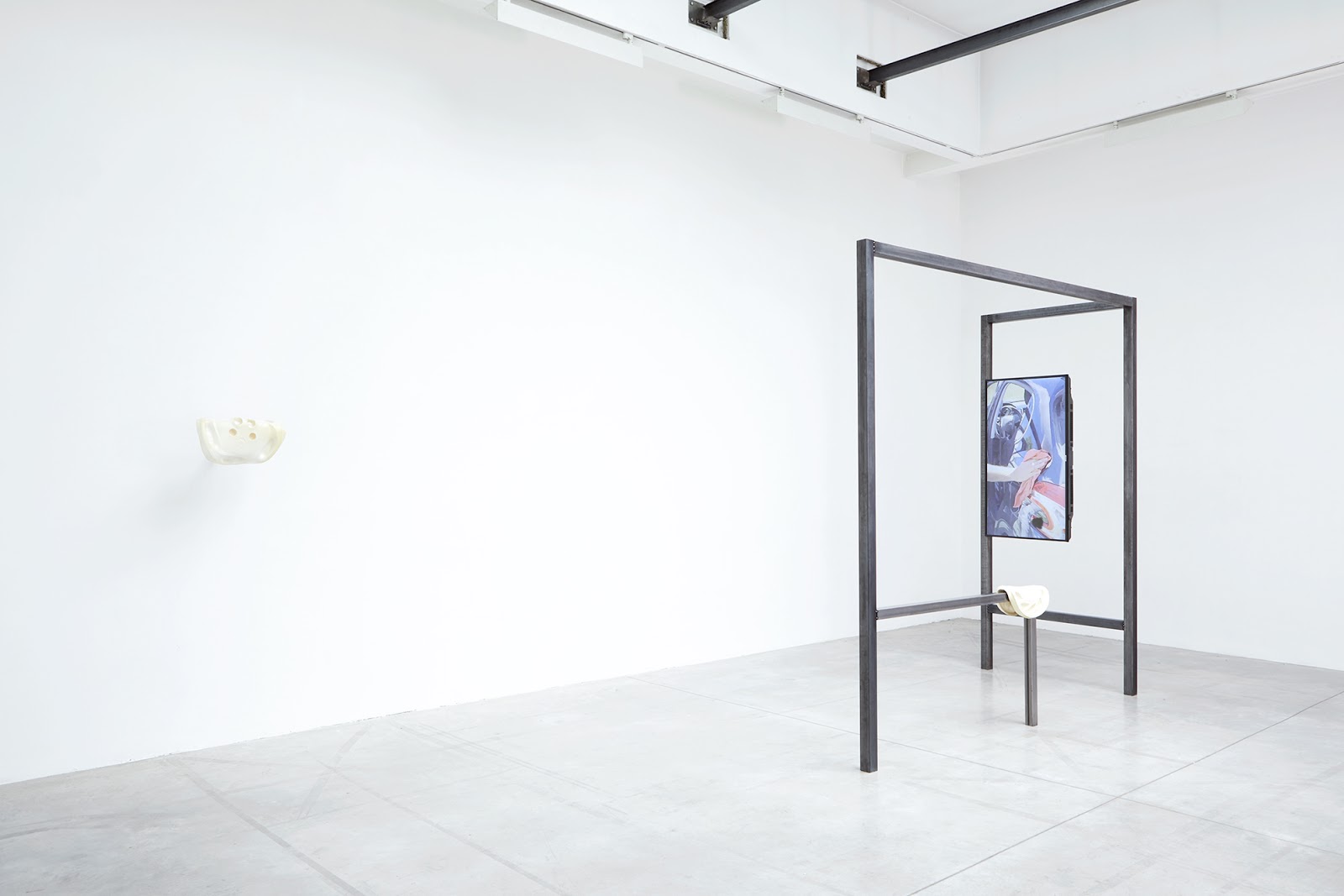 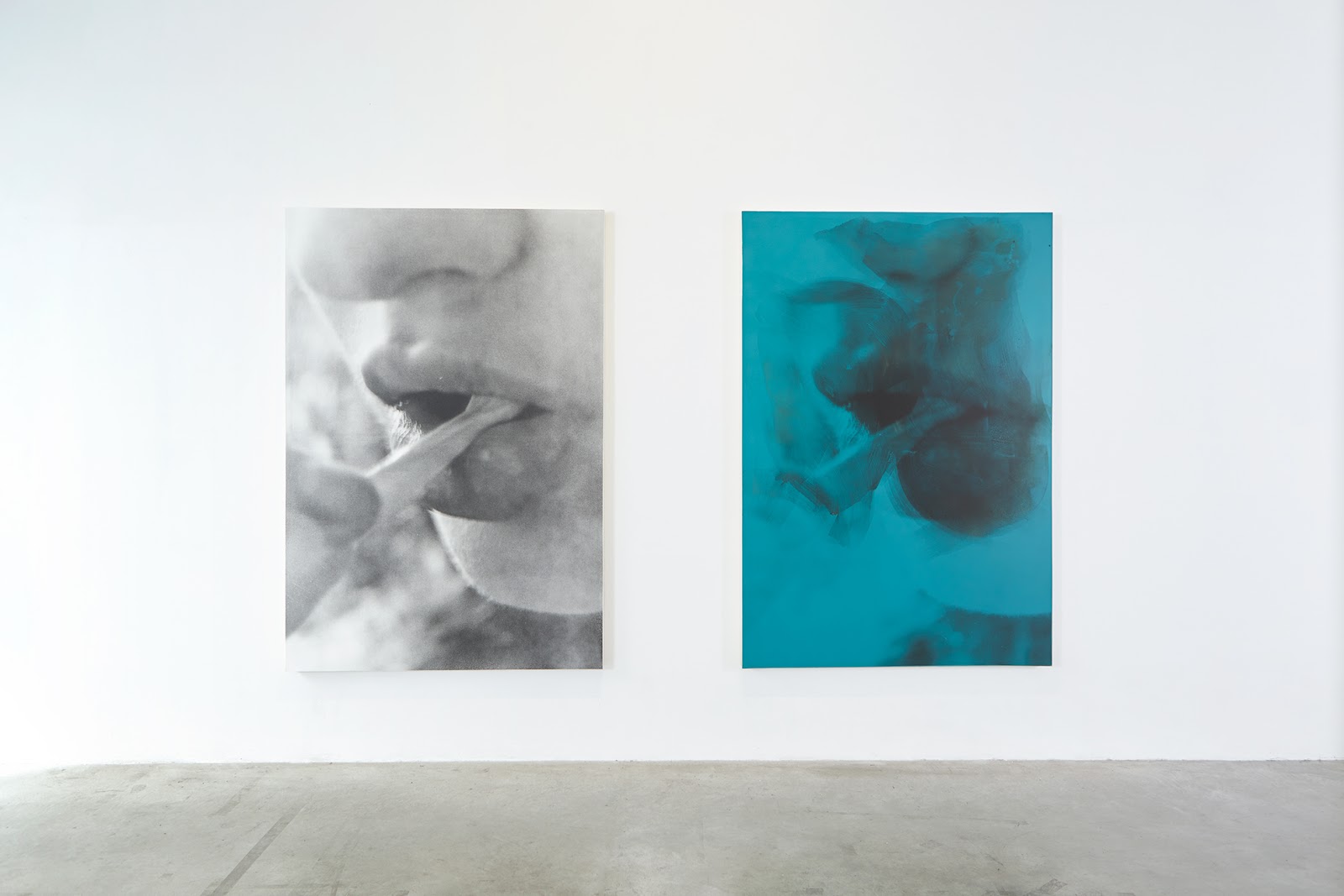 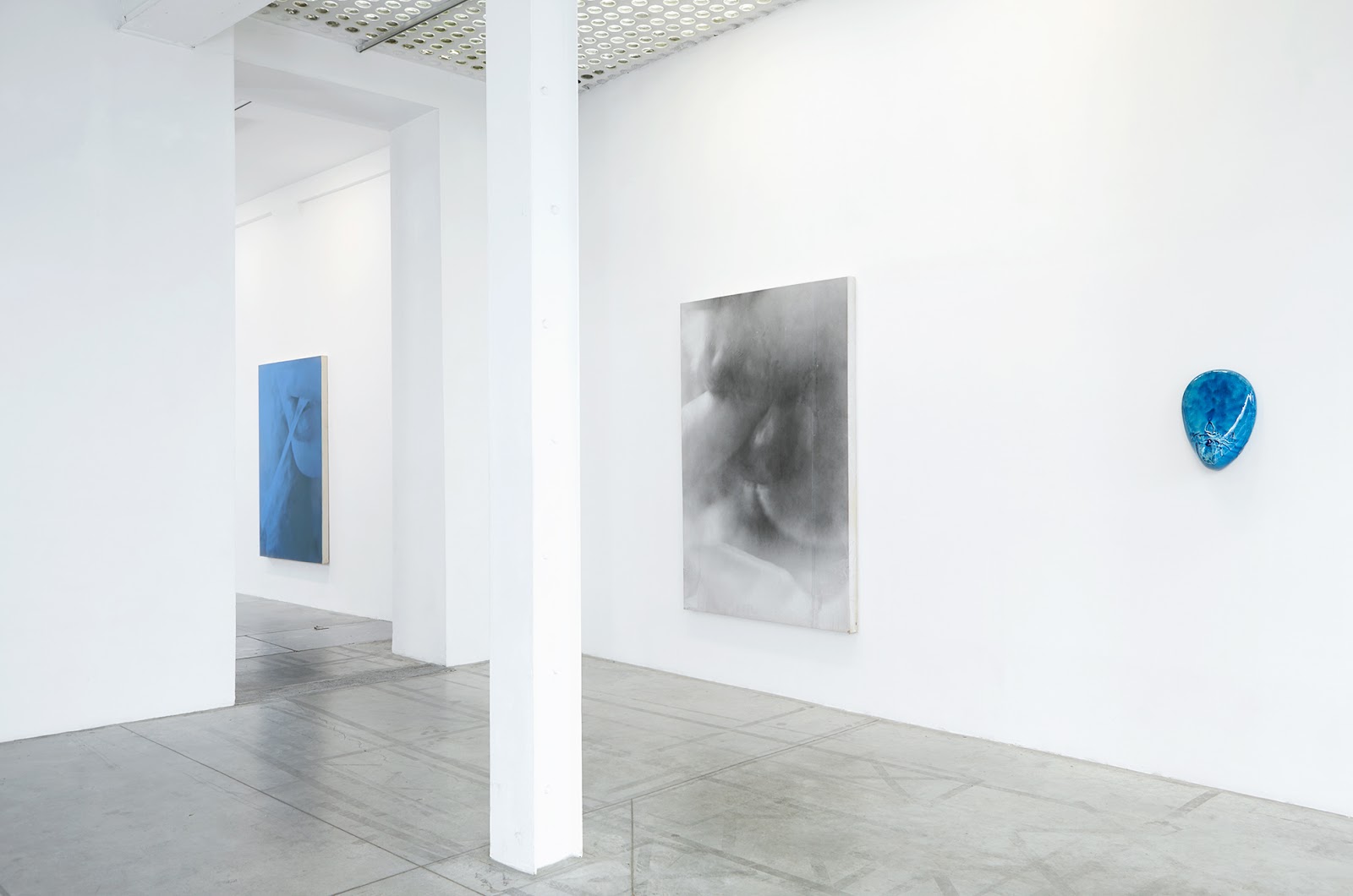 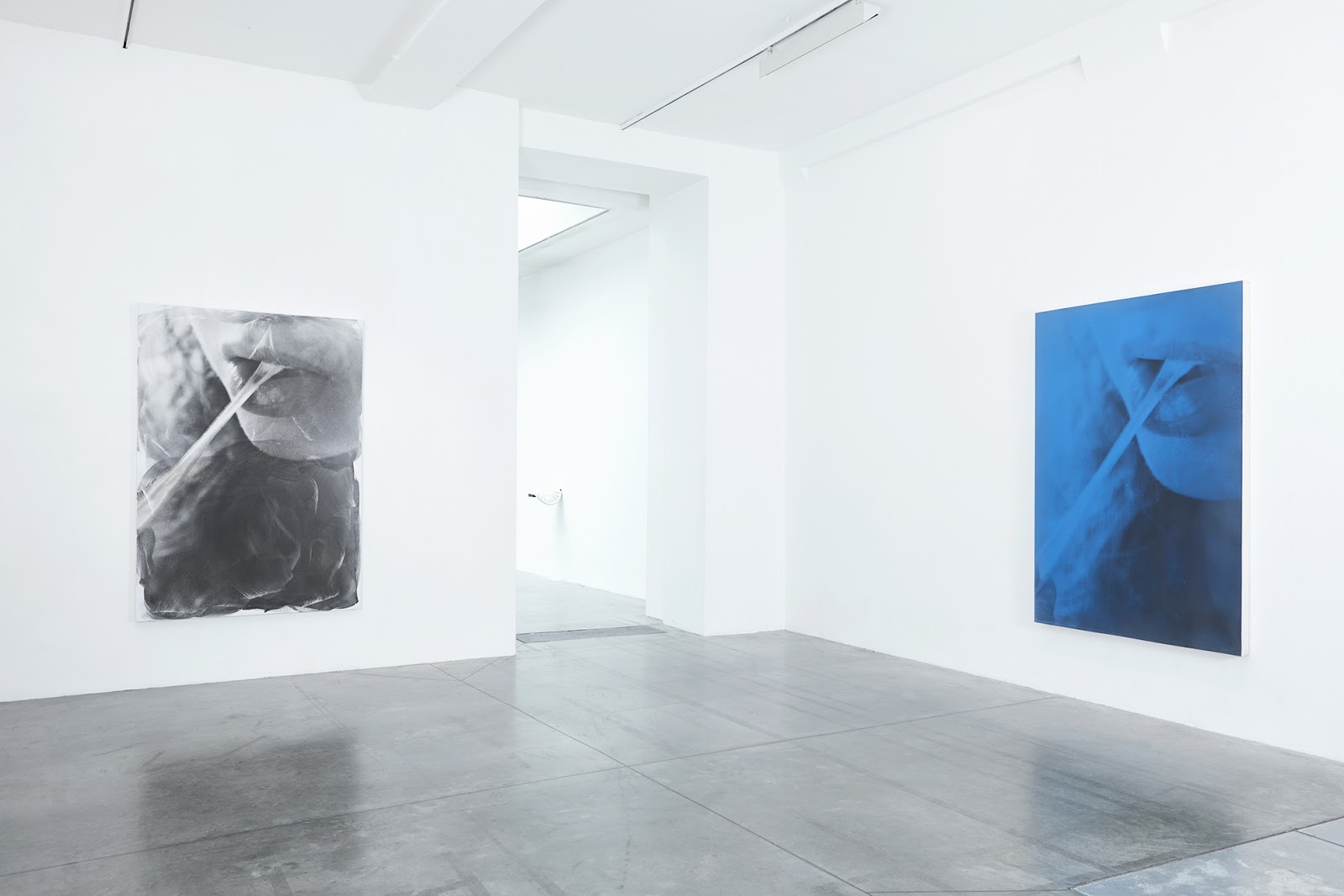 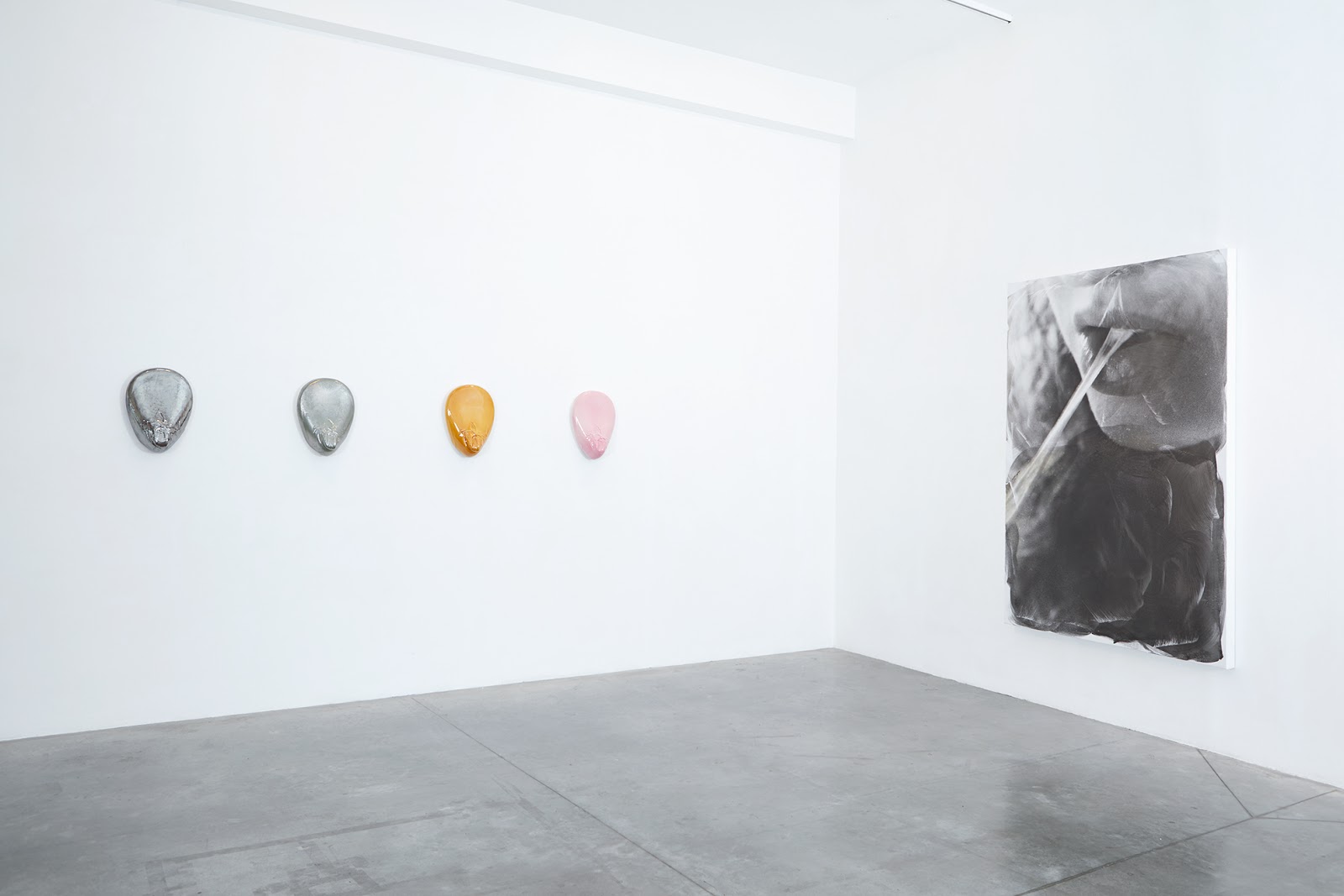 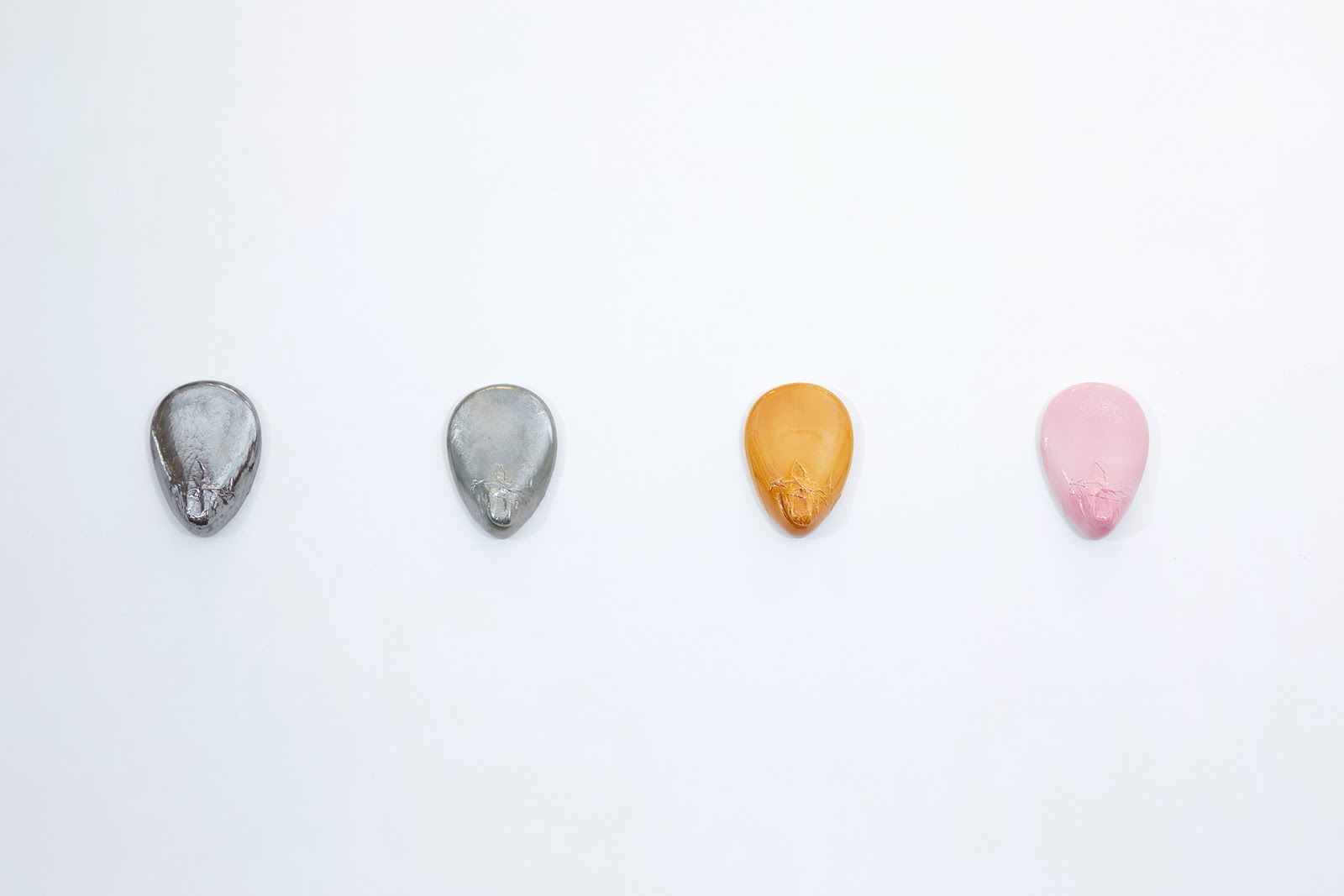 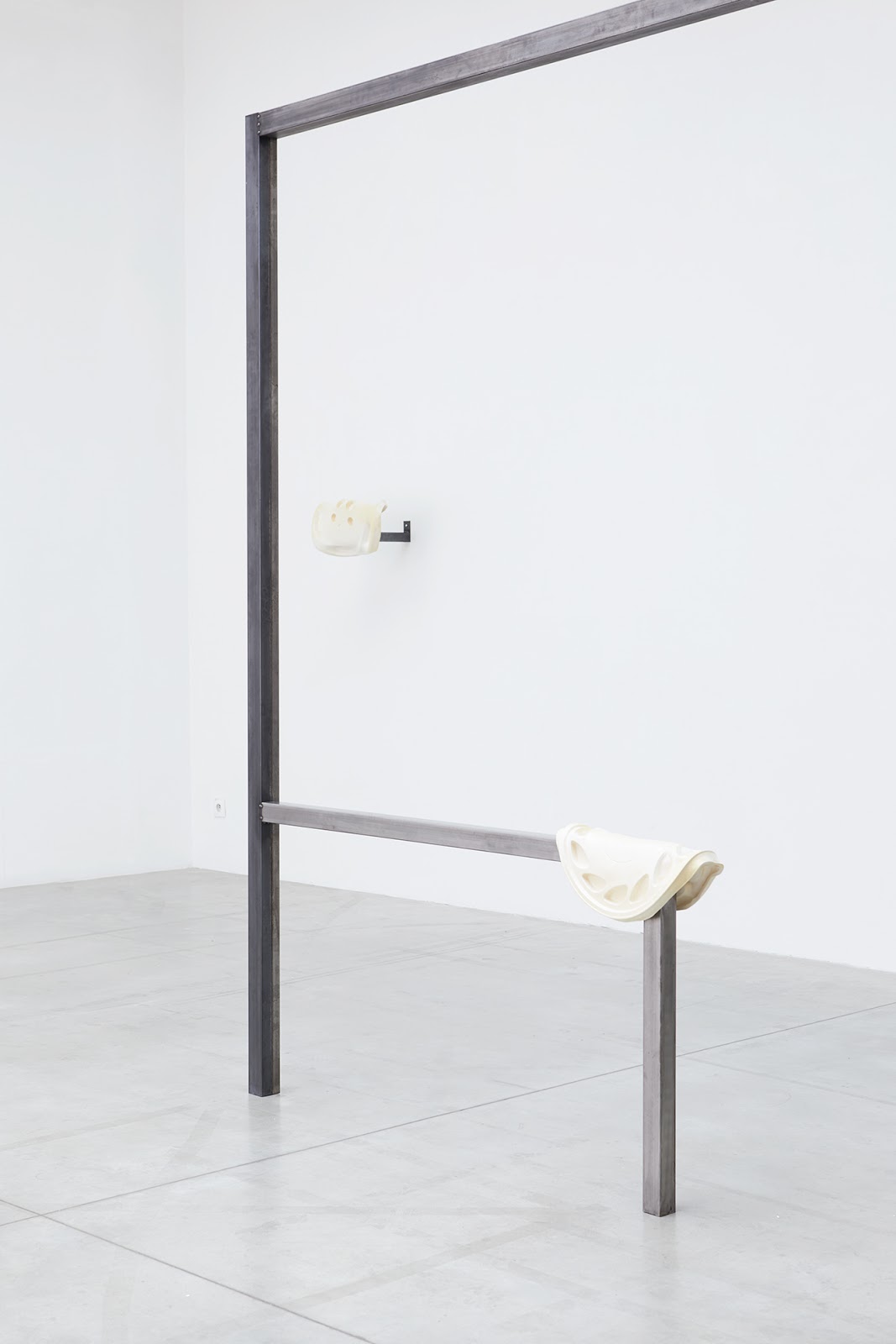 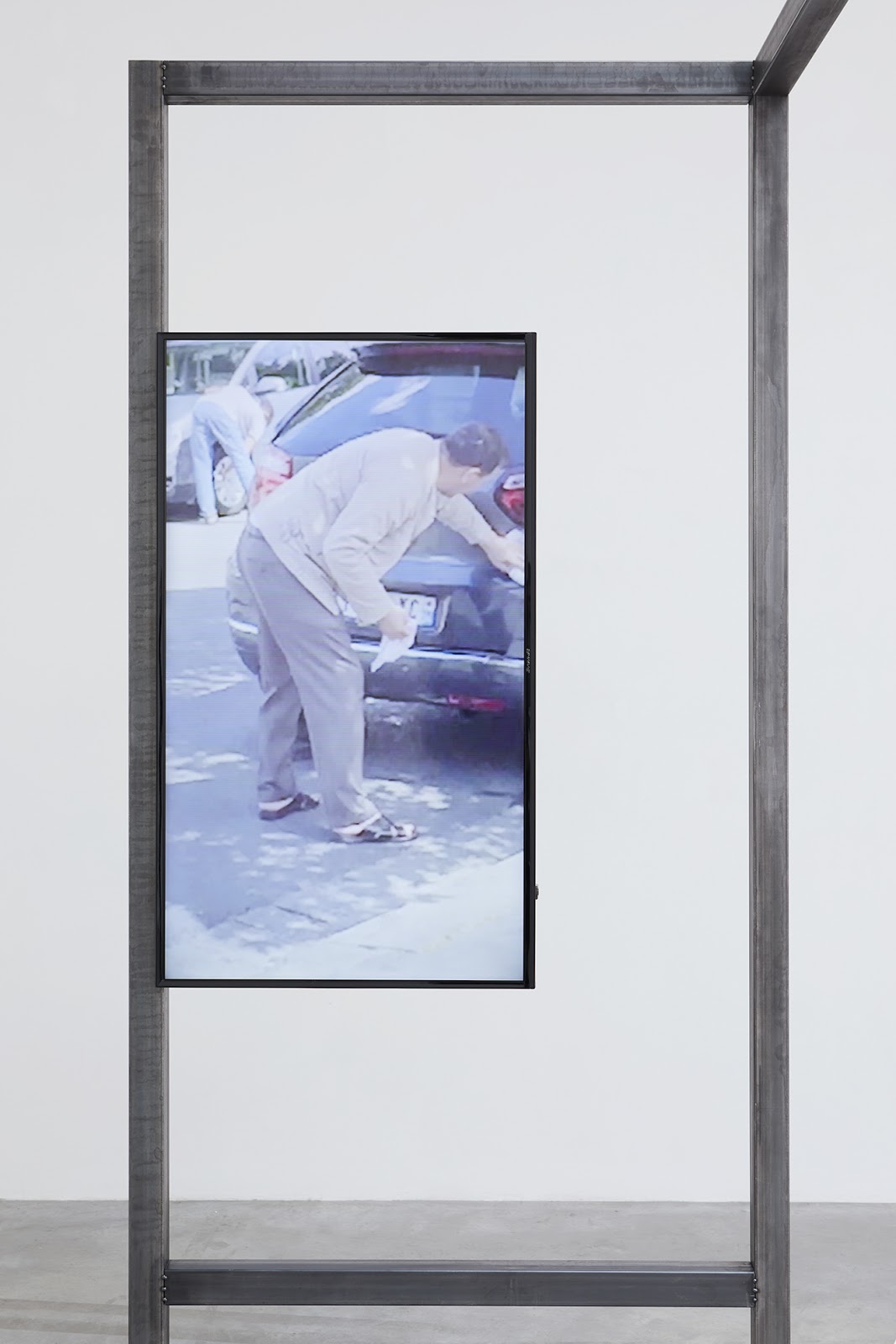 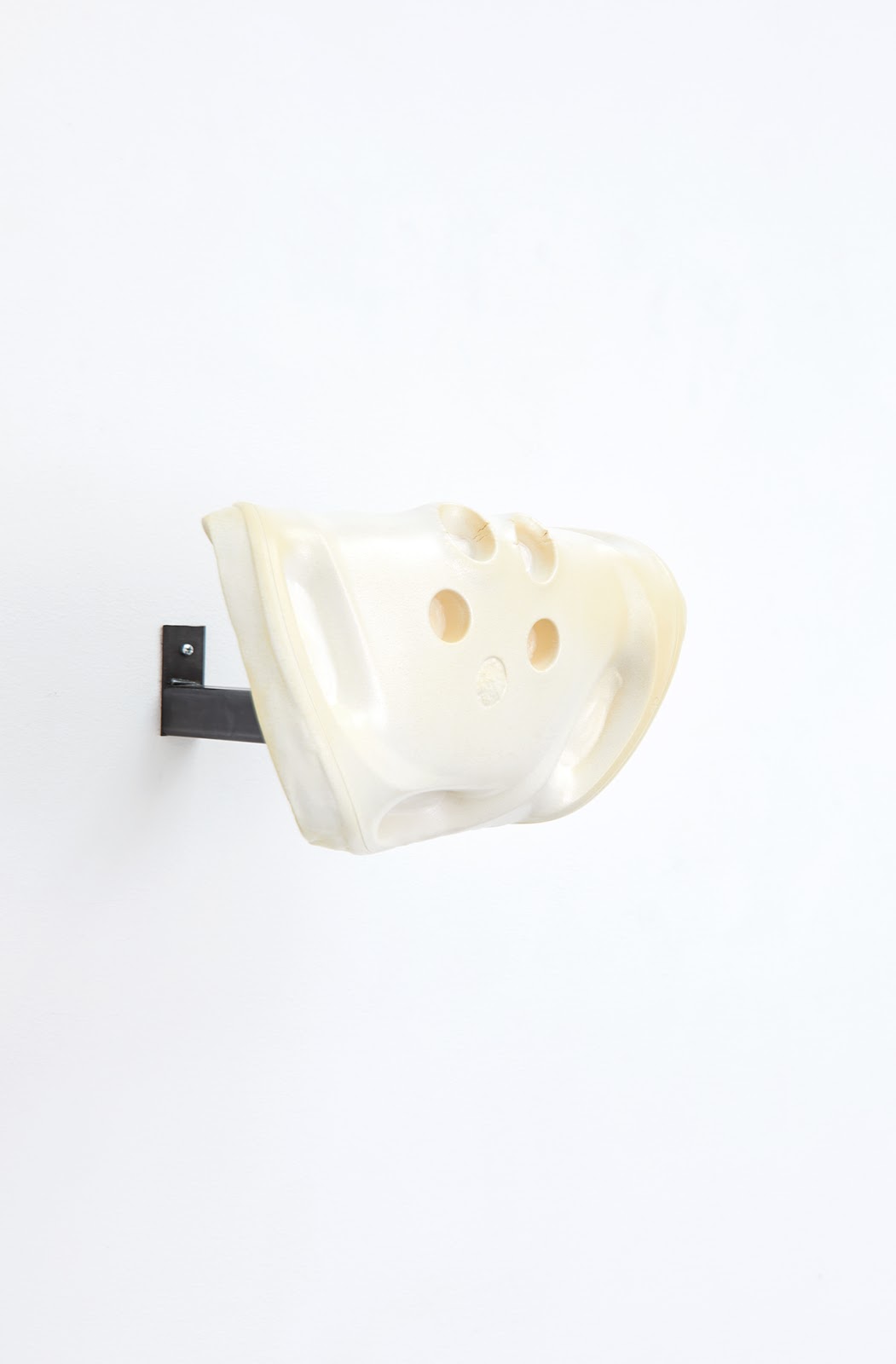 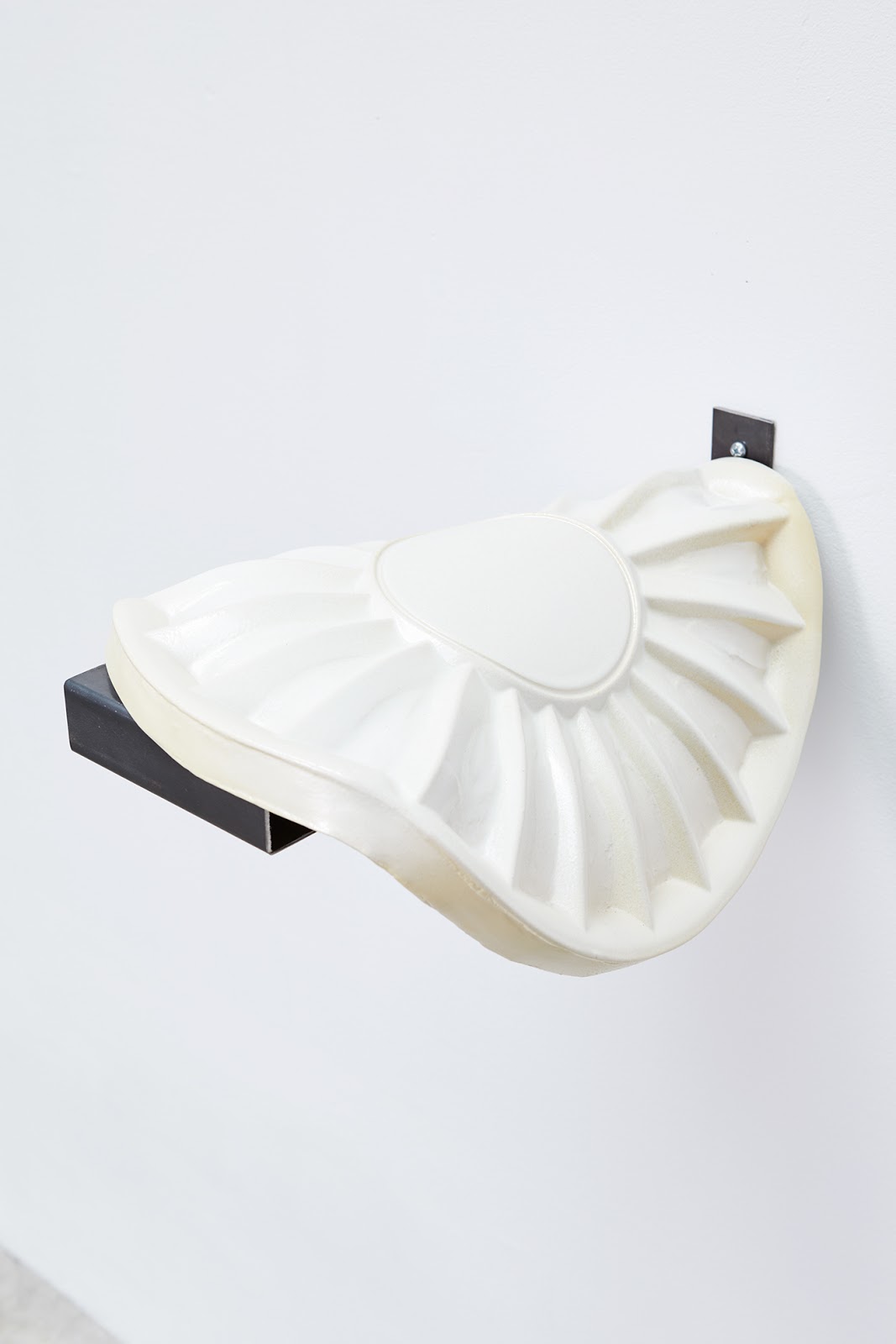 You could see here a direct reference to Michel Foucault's "androgynous
images," which he defined in his text called Photogenic painting, written in
1975 for Gérard Fromager's monographic catalogue. These images combine
mediums and categories, and bear testimony to the free relationship between
photography and painting. Such is the very substance of Hubert Marot's work
in his exhibition GOINGGONE
. His first cyanotypes already conjugated
photographic process with pictorial rendition. Here, his latest series
introduces color as an element of variation, allowing a shift from negative to
task. Color appears, driving the rhythm and, little by little, becomes the
subject.
Around this queenImage,
whose nuances vary depending on the
application time of the liquid emulsion, there is a whole ecosystem of
ceramics in enamel, which has also stood the test of time. They turn into
solid objects a state of evolution, of degradation. Hybridity still rules, hubcaps
melt and become clocks, and scooter seats, lacerated and mended, become,
once hung up on the wall, a series of ancient masks.
There is then, in its very technicality, in the invariability of the dried out
result, a contained and sealed process of alteration. If matter is adorned with
color variations, the intention is entirely focused on time, what it allows, what
it dilates, what it forgets. In this work of patience, a softening phenomenon
occurs. Before it is fixed, matter has distended, like the closeup
of the
chewedup
chewing gum on the canvas prints, the ceramics have become
limp, waiting for time to pass. A metallic structure, built like a bus shelter,
hosts a looped projection of anonymous men who have the patience to rub
their car's bodywork until it shines, another reminiscence that this is all, once
again, about the passing of time.
We feel like we're in a slow motion movie, in a vinyl record set to the
wrong number of turns per minute. In the seriality and repetition of the
objects presented here, seats, hubcaps, images, there is the same
mechanics as in the mastication of chewing gum, the same fatality, the same
latency. And yet, what saves everyone from being swallowed by this great
machine is, in the end, the unreproductability
of this work. In "each moment
in time is unique" there is "each process is unique," and therefore each
result. Repetition doesn't rob the image of its singularity, on the contrary, it
allows it to vary in its unicity through gesture, for the obsession with
reproduction is also the obsession with its failure. An outrageously oiled
machinery.
Elisa Rigoulet