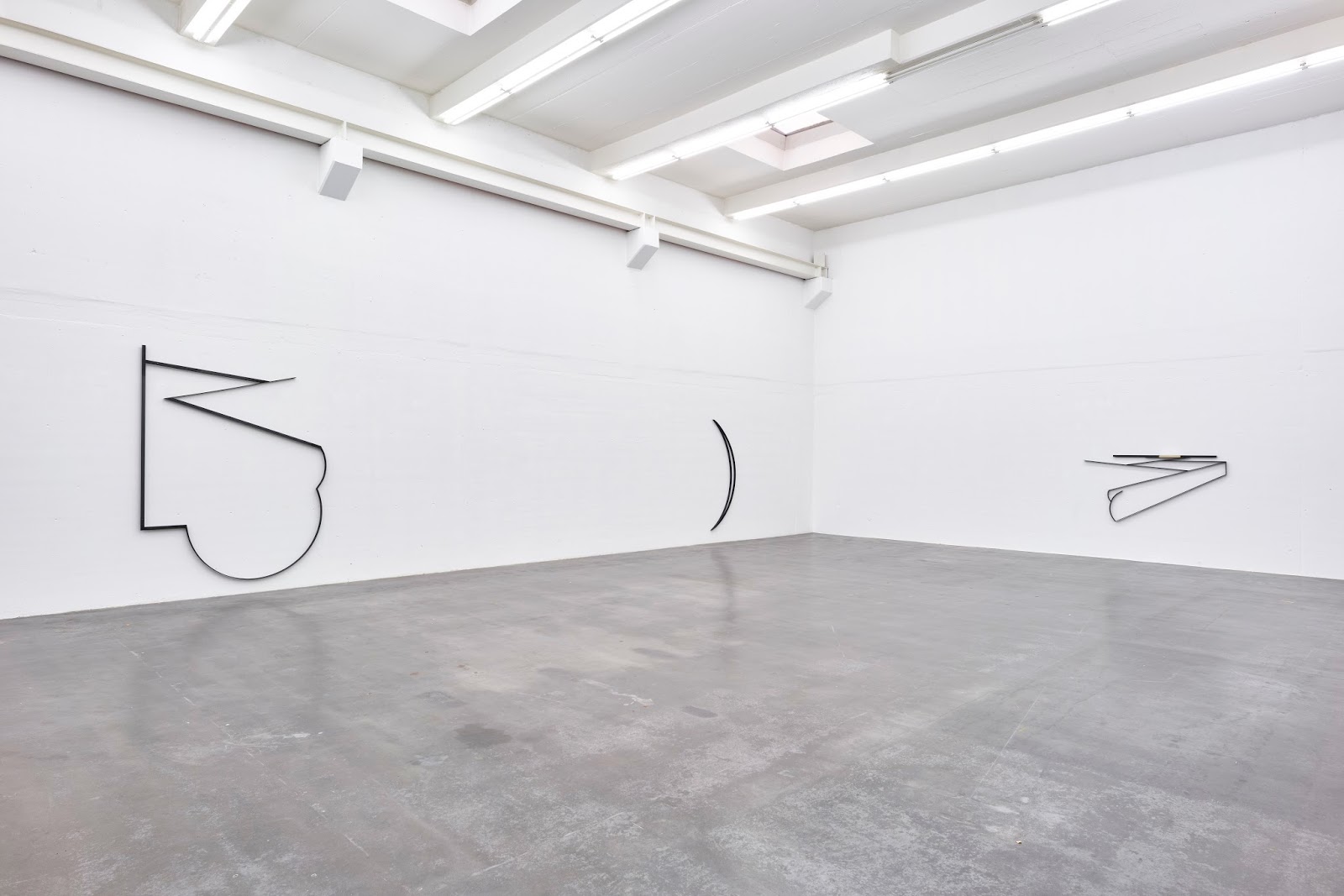 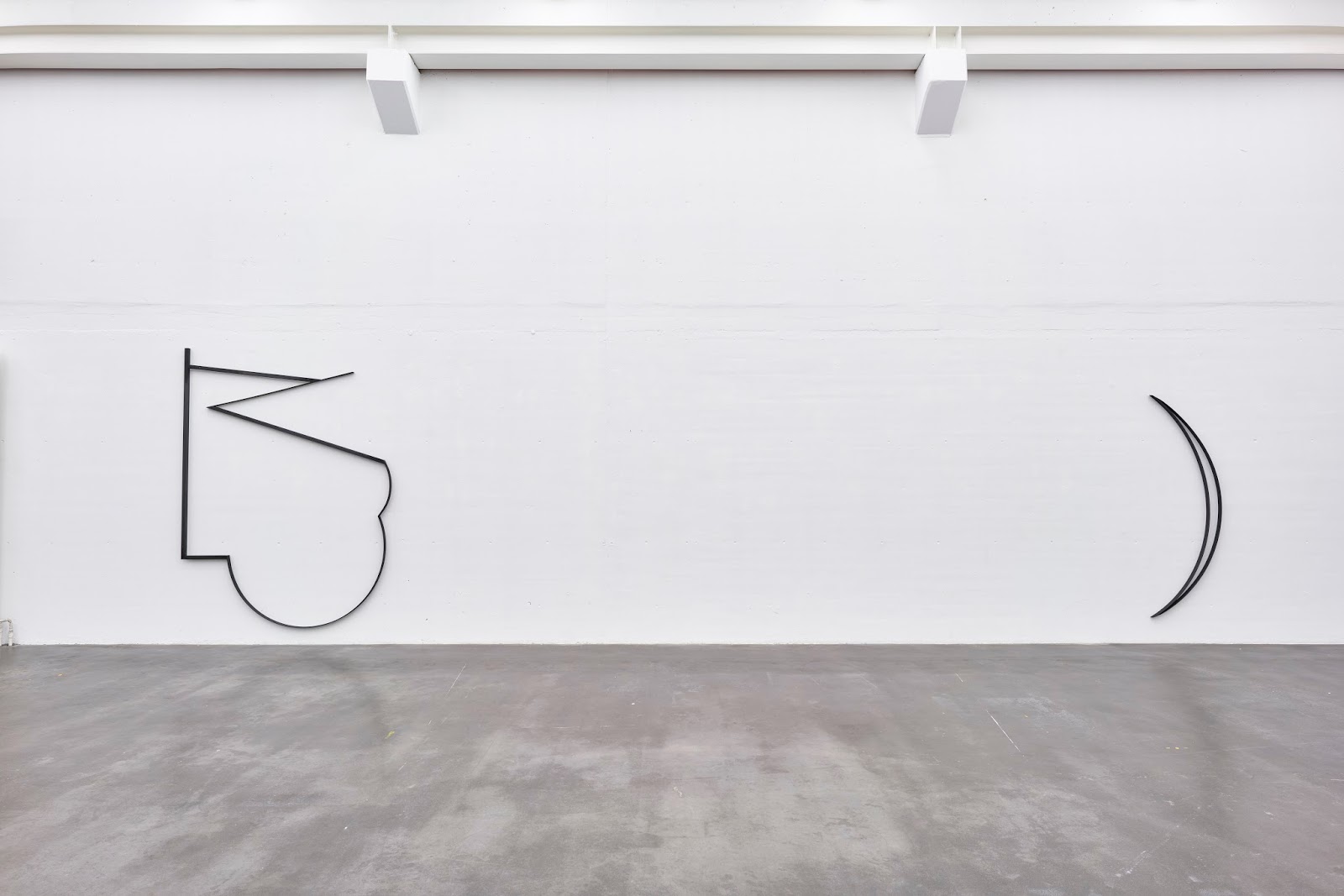 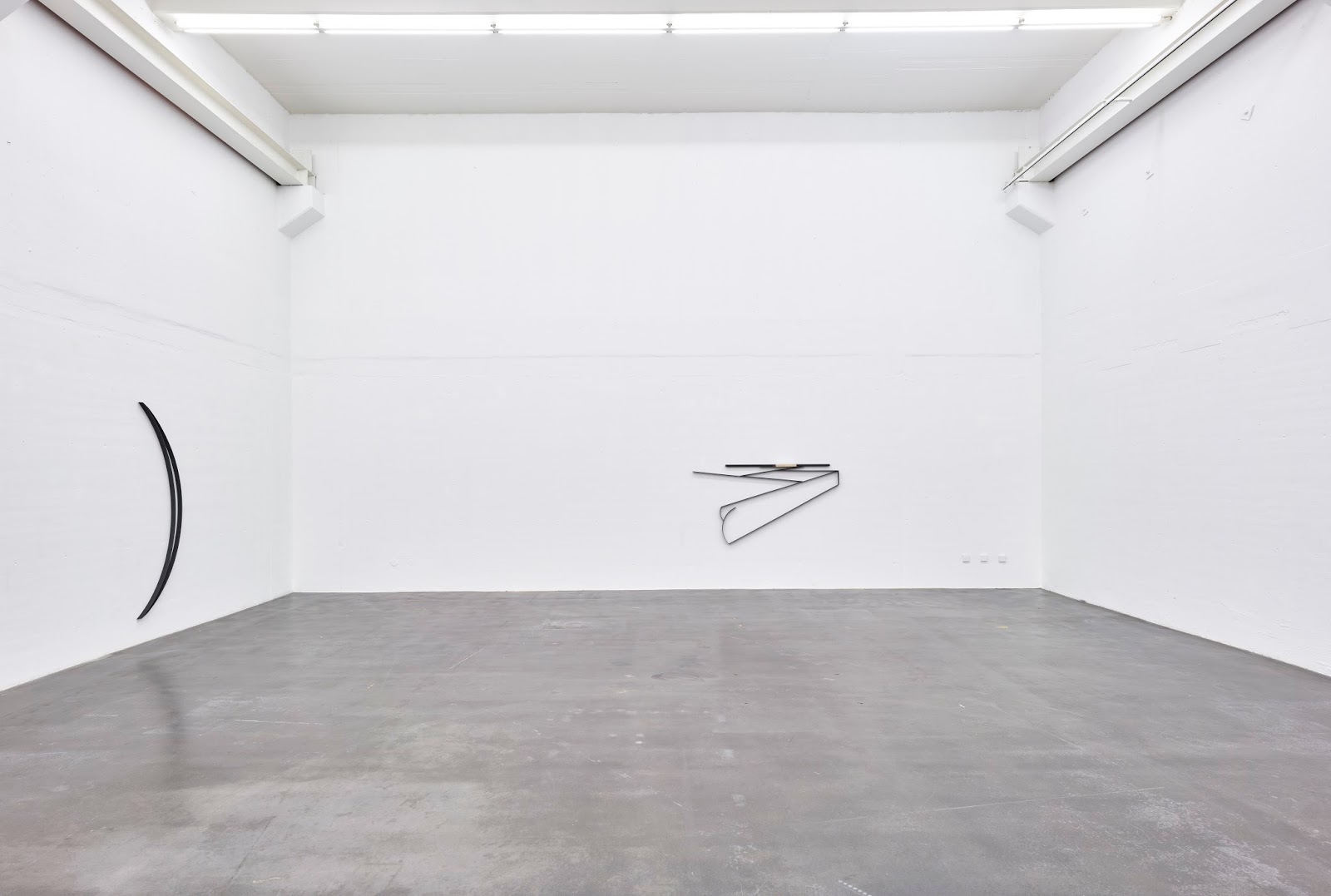 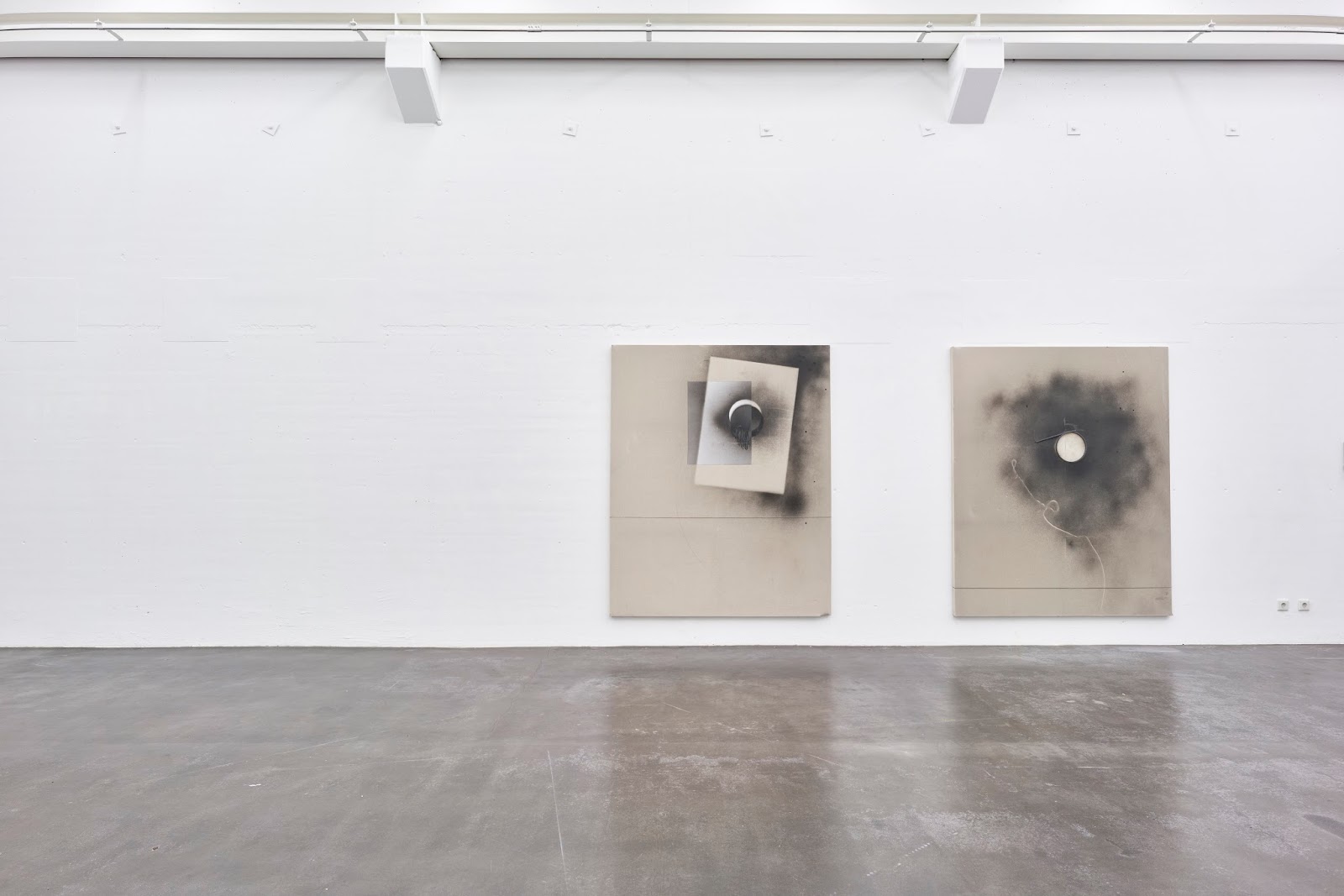 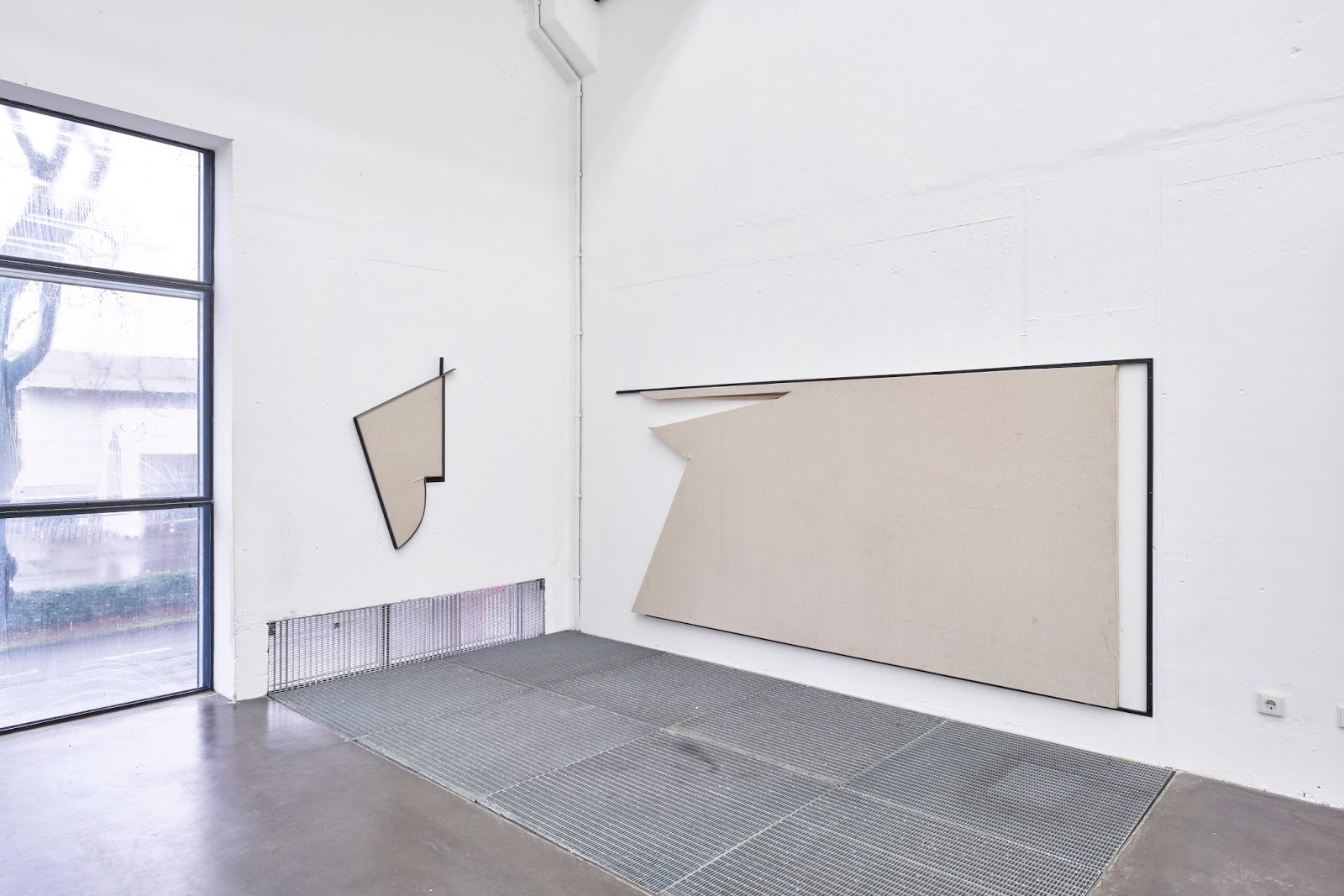 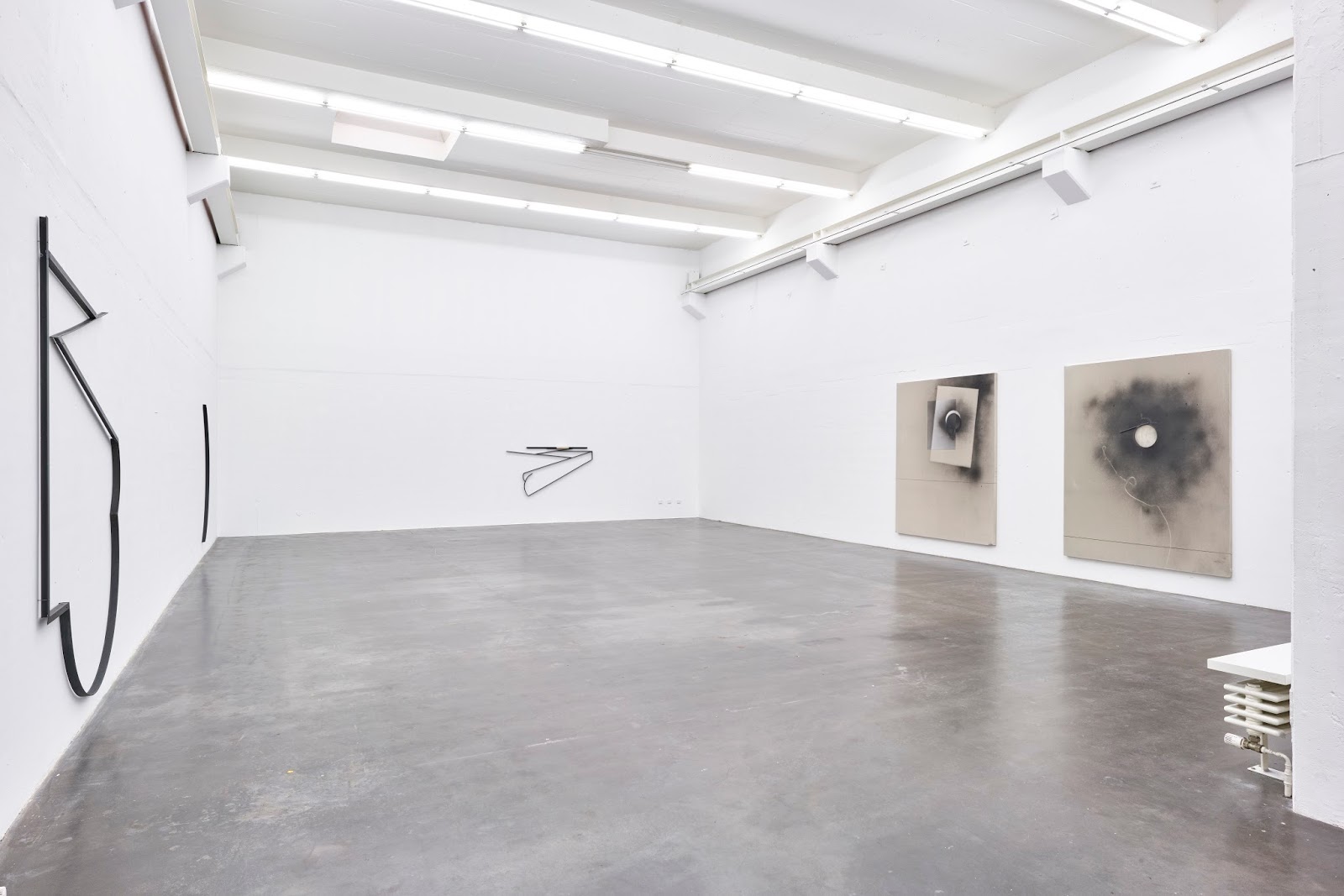 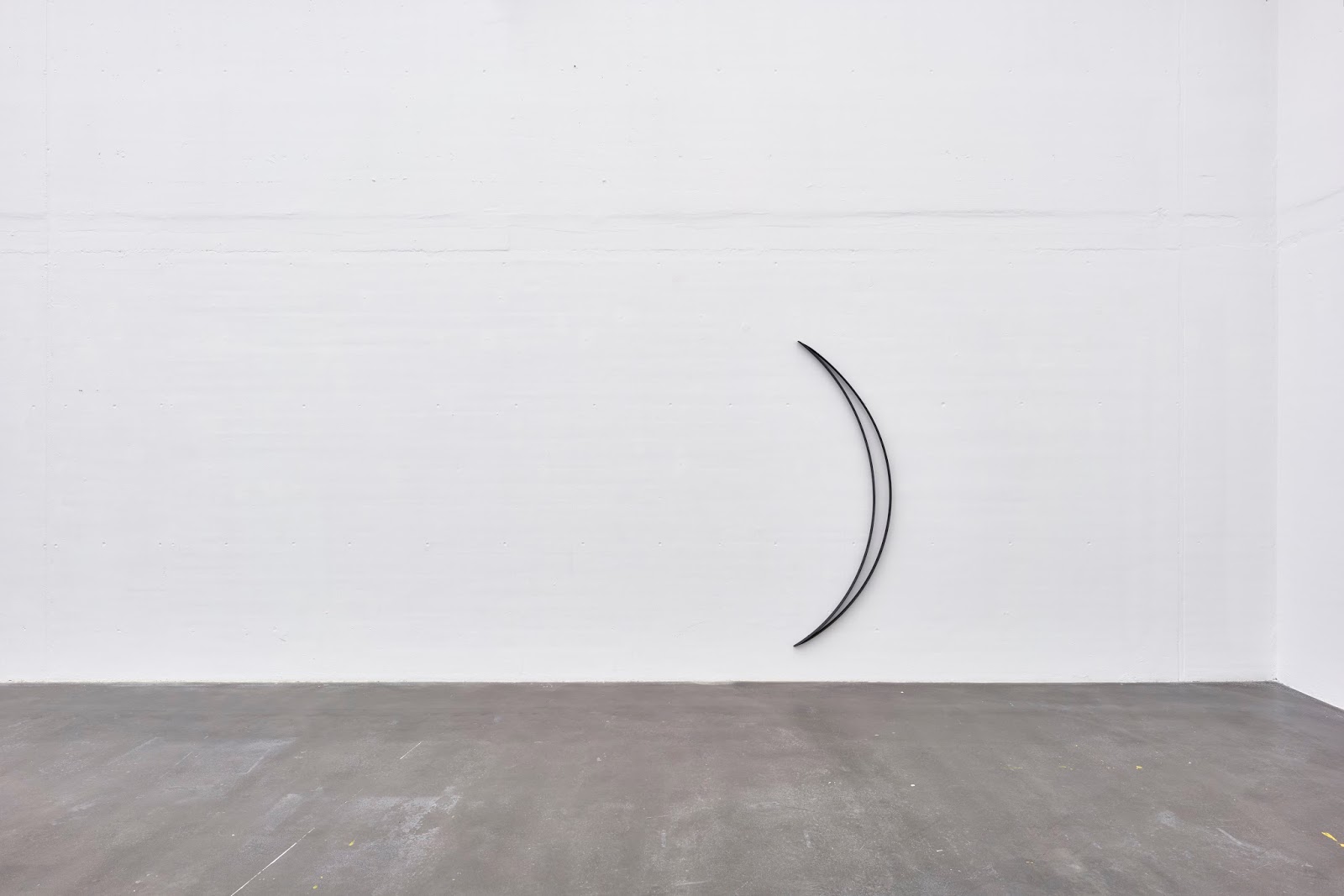 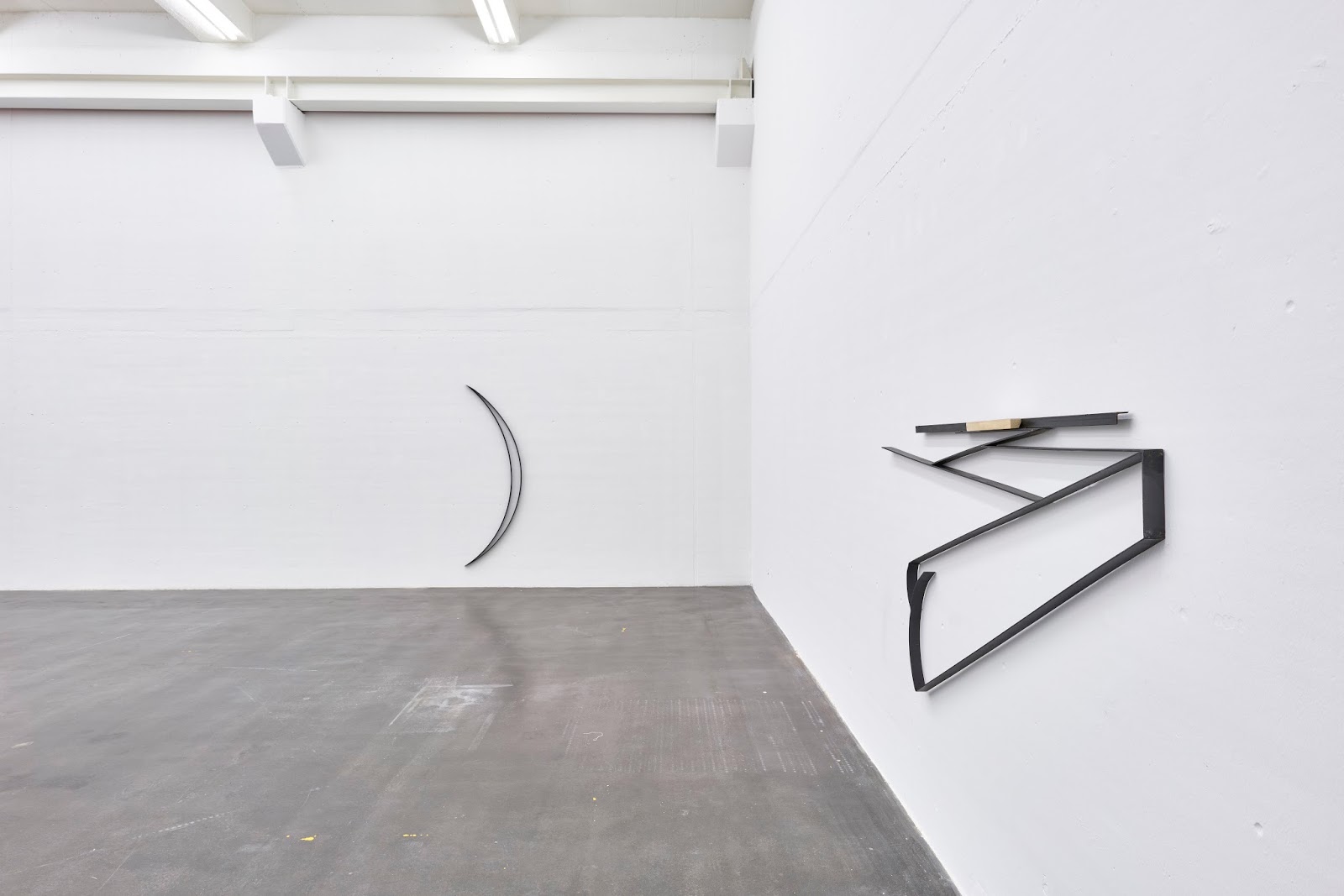 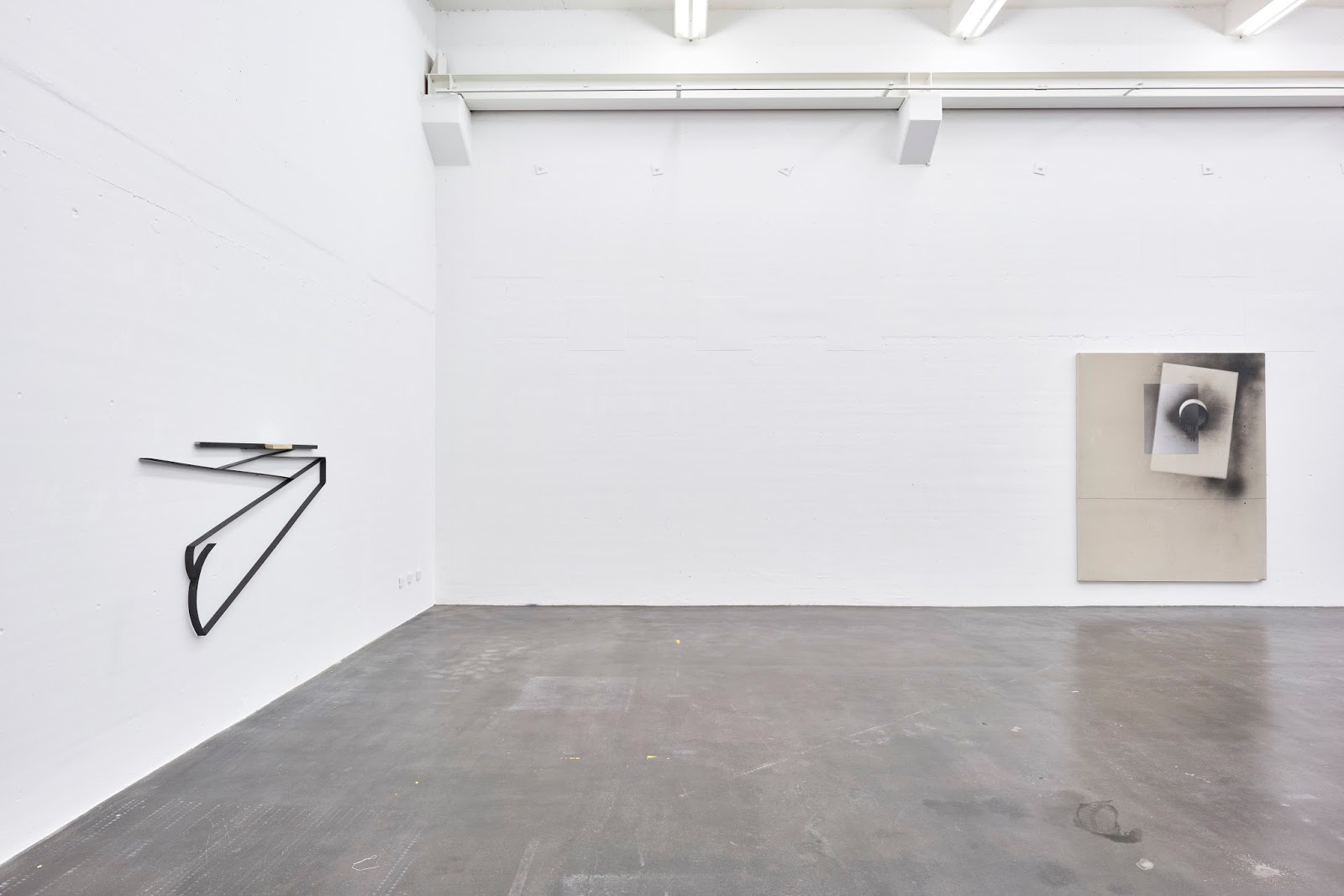 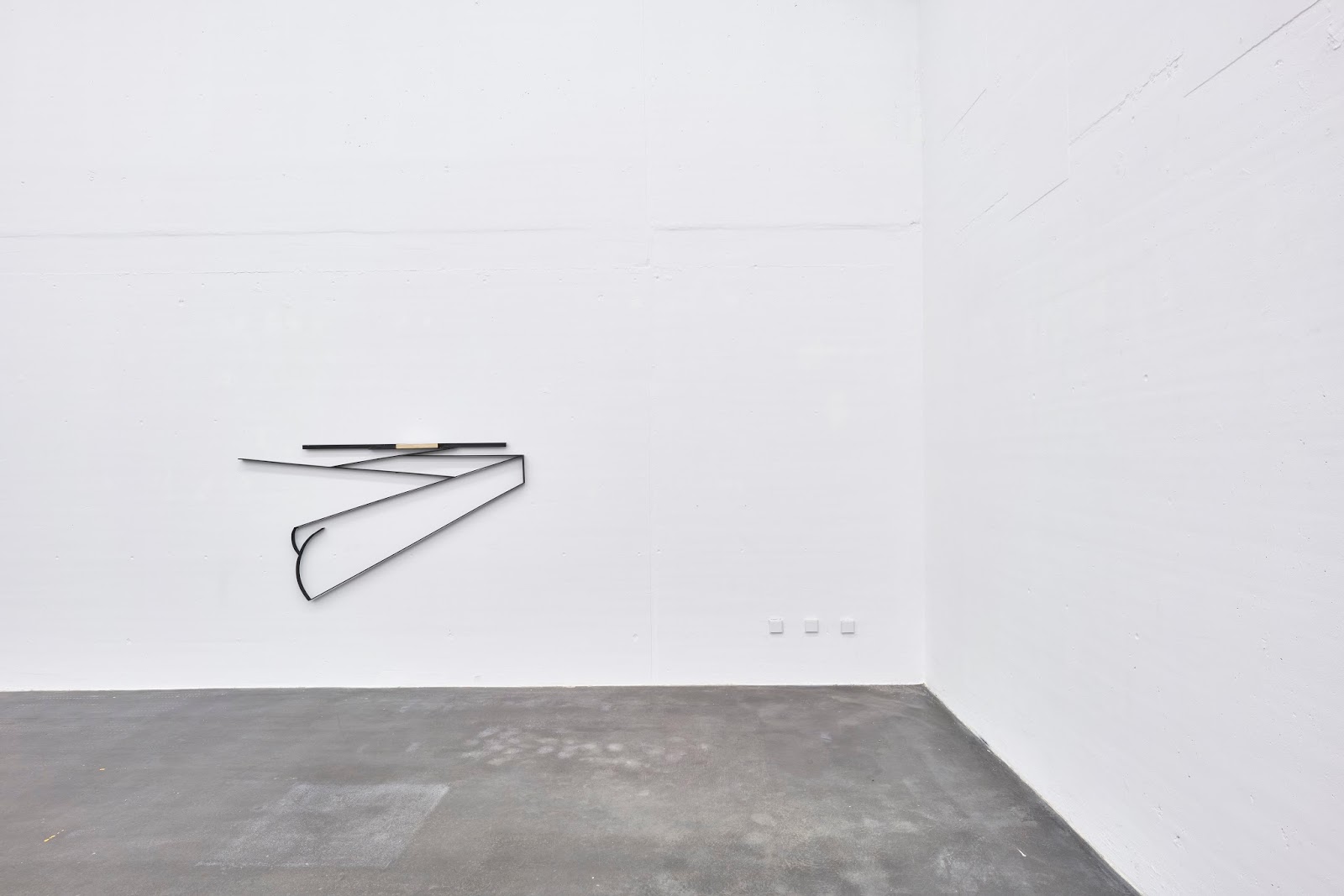 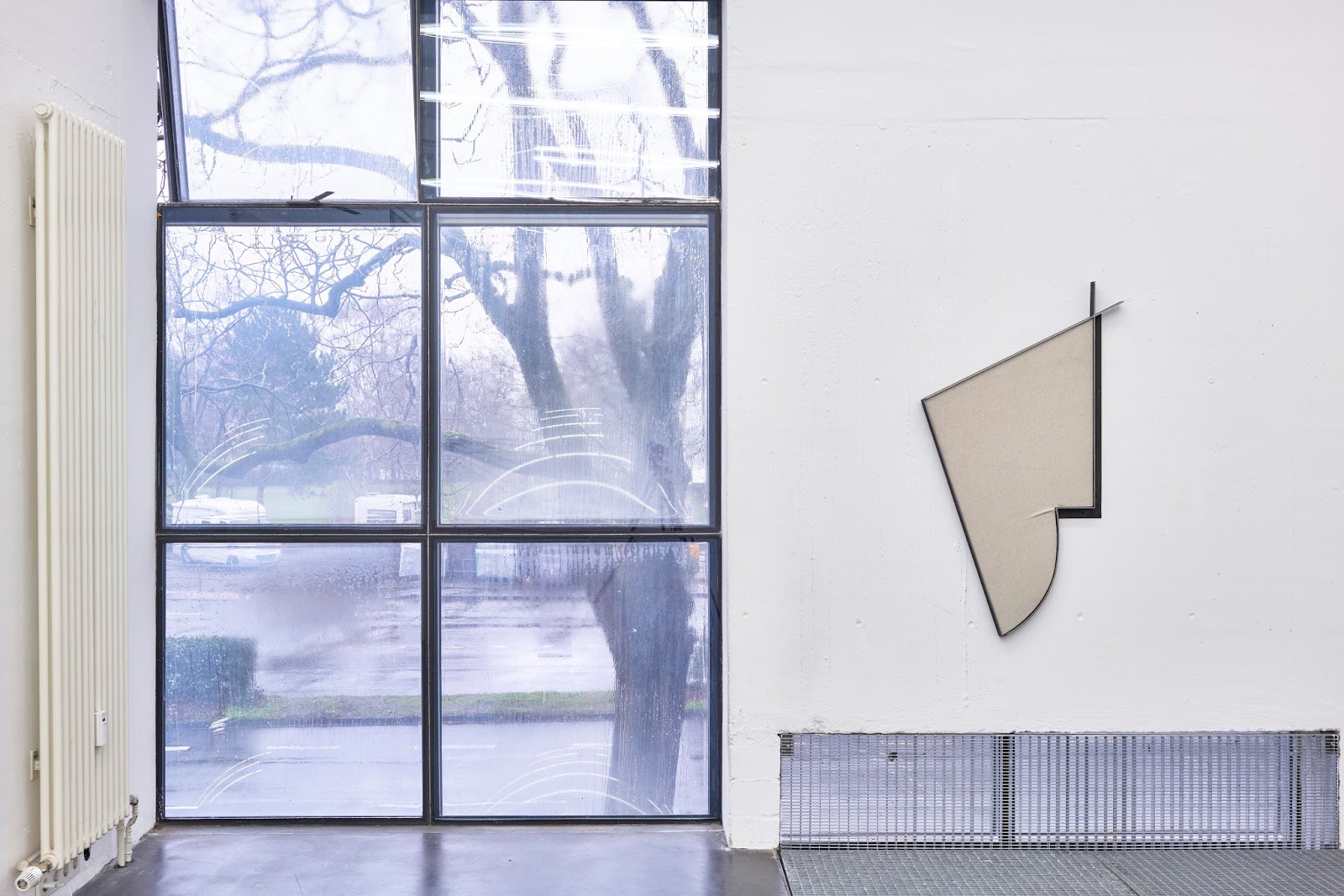 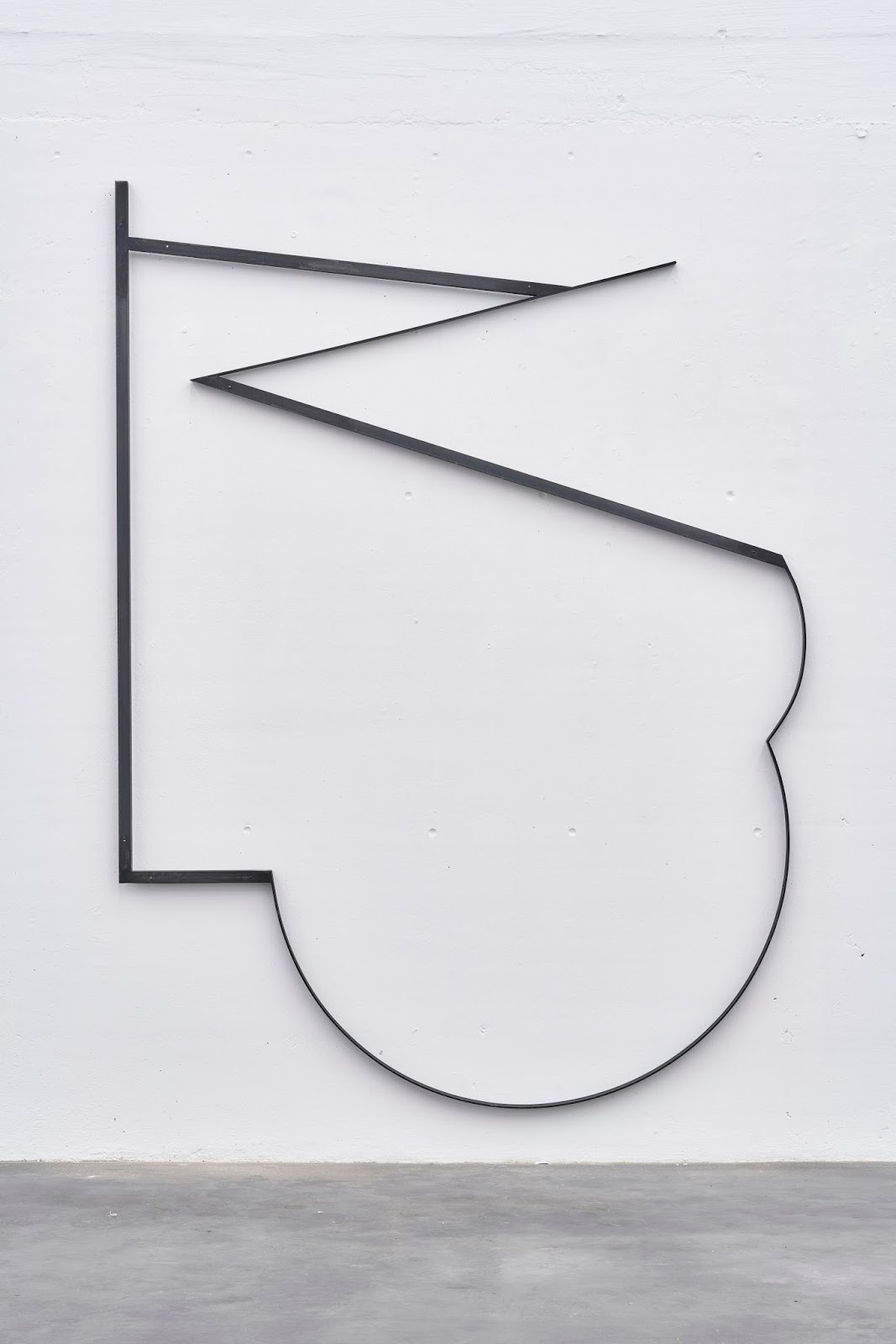 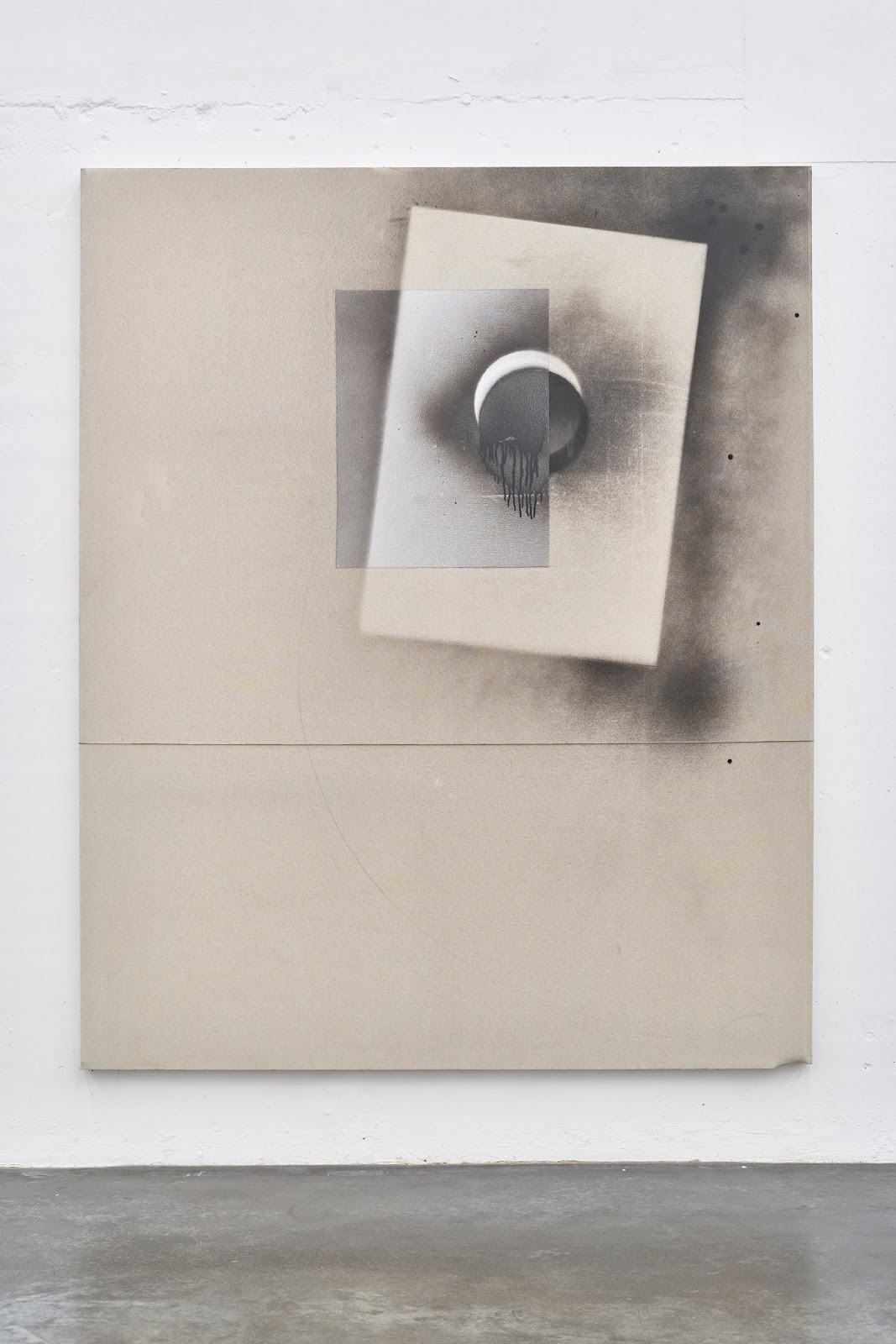 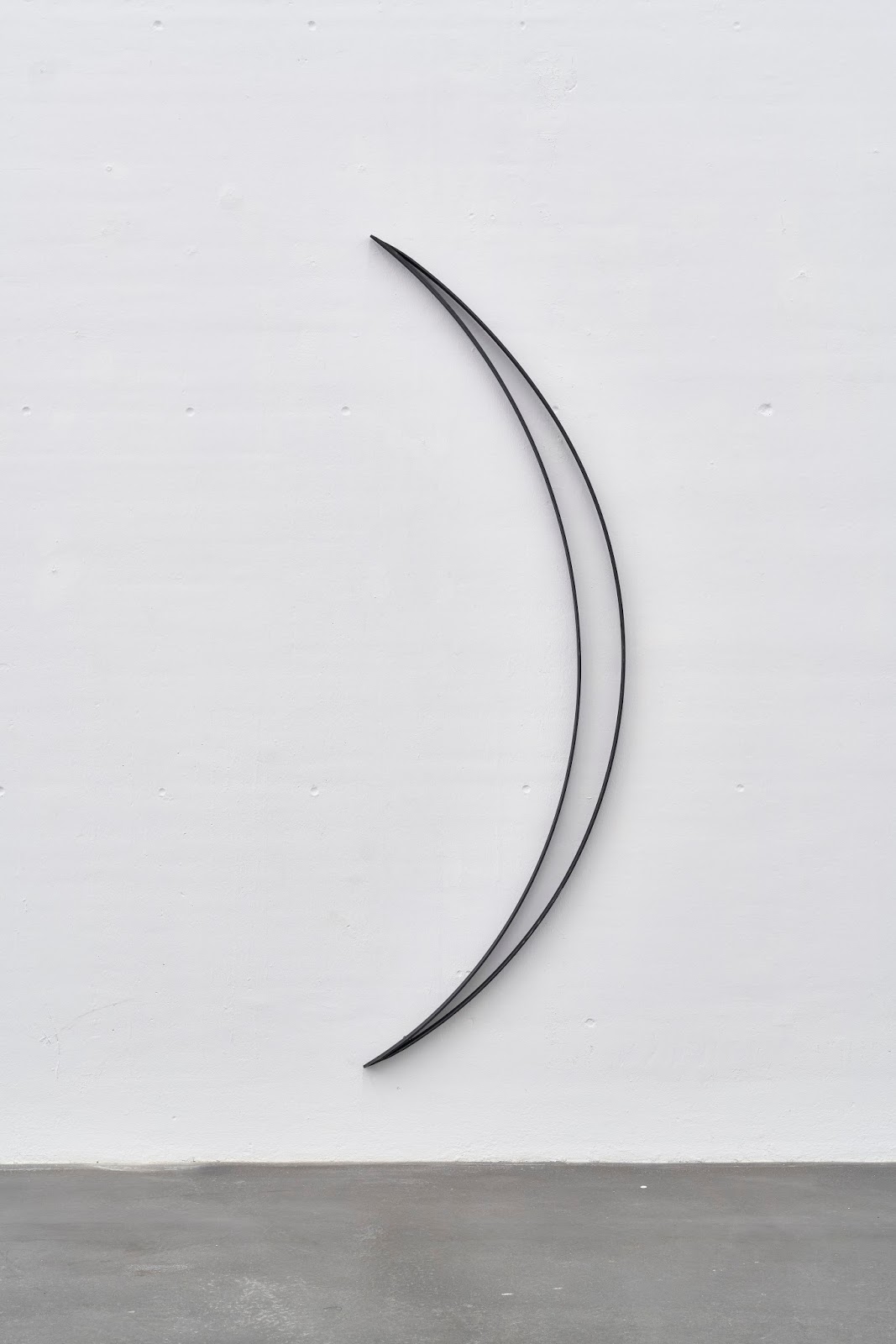 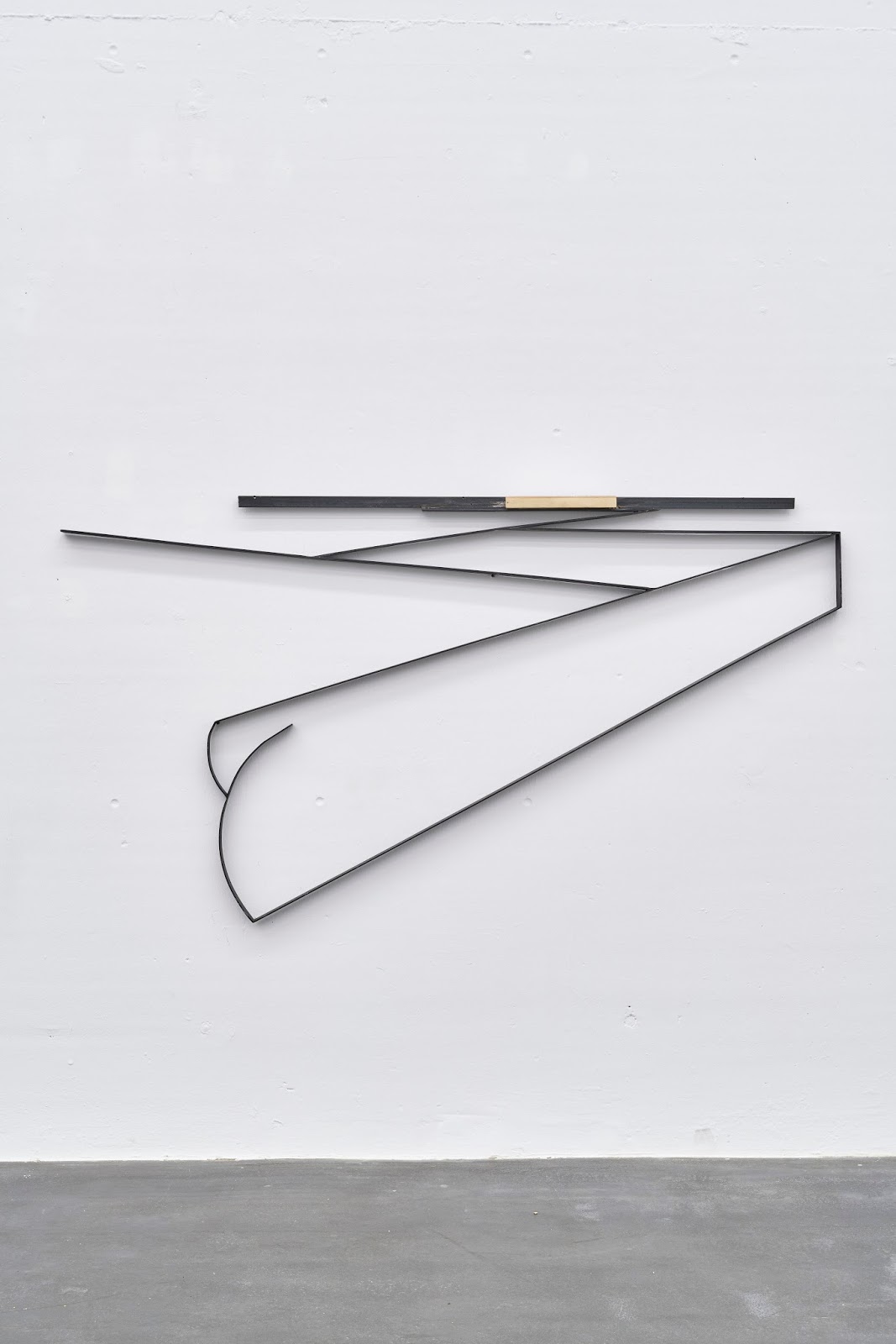 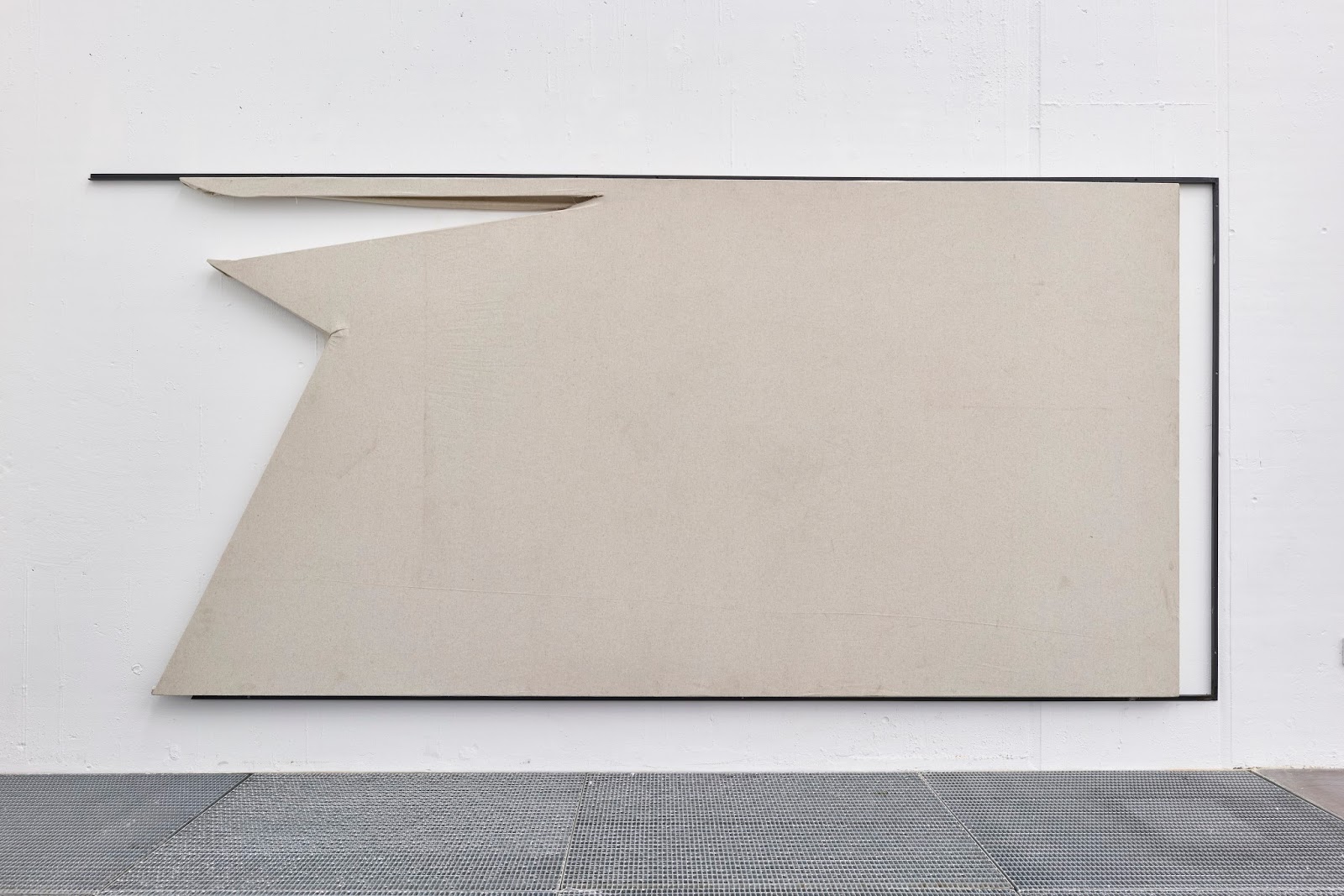 Jonathan Binet’s works are multifaceted and thus not easy to categorize right away. However, his works can be attributed to the realm of painting, which does not necessarily seem obvious at first glance. This has to do, on the one hand, with the fact that he rarely uses the classical stretched canvas-rectangle, but rather works with ‘shapes’; and, on the other hand, he generally does without colour (or uses exclusively black) – or he does without the canvas altogether and sketches his forms and images solely with the help of outlines welded from raw steel runners, which results in silhouettes or forms, which ‘stand’ on the wall like line drawings.

Included in the exhibition is, for example, a small-format work composed of metal bands that unite two overlapping angles with an organic curve that, in turn, frame a white-beige shaped linen canvas. Binet juxtaposes this delicate work with a powerful, 3.5-metre-long and 1.7-metre-high canvas surface, likewise outlined by a rectangular metal frame, the jagged left side of which ‘turns toward’ the smaller work. Forms of closeness and compactness are juxtaposed with and stand in contrast to forms of incompleteness and rawness. Equally rich in contrast is Binet’s arrangement of the works in the gallery space:
At the end of a long wall, for example, Binet positions a circa 1.3-metre-high and extremely thin, sickle-like metal outline. As though carved into the wall with a knife, the sharp, narrow, and nearly black metal form seems to emerge out of the white ‘void’ of the wall.
Binet always thinks beyond the individual work. His works always reveal strong connections to each other. It is either line connections, interrelated proportions and disproportions, repetitions of forms, variations, or form complementarities, which connect the works with each other. The choice of materials and the predominant renunciation of colour, however, also serve to link the works visually.

Binet unites and strongly interrelates his works not only with each other, but also with the exhibition space. His works are thus always placed on, with, around, and against elements of the architecture: windows, doors, gratings, radiators, columns, and other elements are taken up and serve as interaction platforms for his works – the exhibition space and its specific characteristics thus define the placing of the works. Seemingly unpretentious situations, such as corners, staircases, and exits, can become central locations when the artist reassess and reconditions them through the placement of his works.
Also of great importance to Binet is the constant development and modification of works throughout the entire process. The unintended, the accidental, and the coincidental are ‘allowed’, accepted as inspiration and modification, and accompany the works’ process of formation even after they leave the studio.
It can thus be the case that a work is unmounted during installation and remounted in a new form, for example when the artist recognises new compositional focal points and connections while breaking the form down, picking up on these and allowing them to flow directly into the work. A dynamism that appears to know no bounds. A work that is always open for everything that takes place around it.

Born in 1984, lives in Paris. Studied at ENSBA Paris and Beaux-Arts Saint-Etienne.