Christopher Petit  / In What's Missing, Is Where Love Has Gone 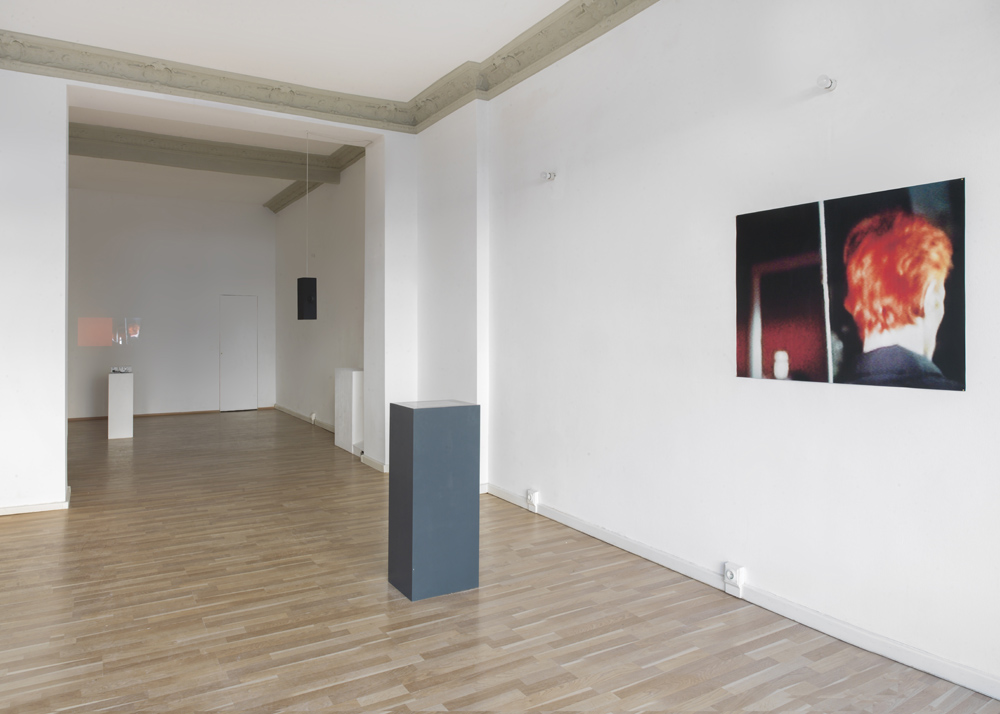 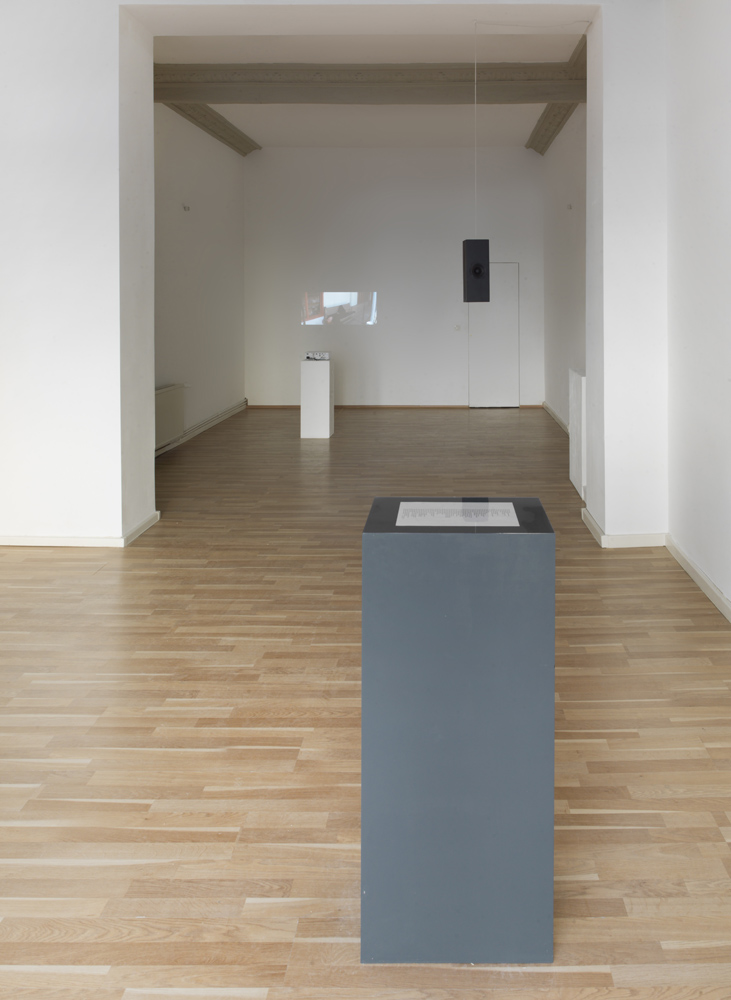 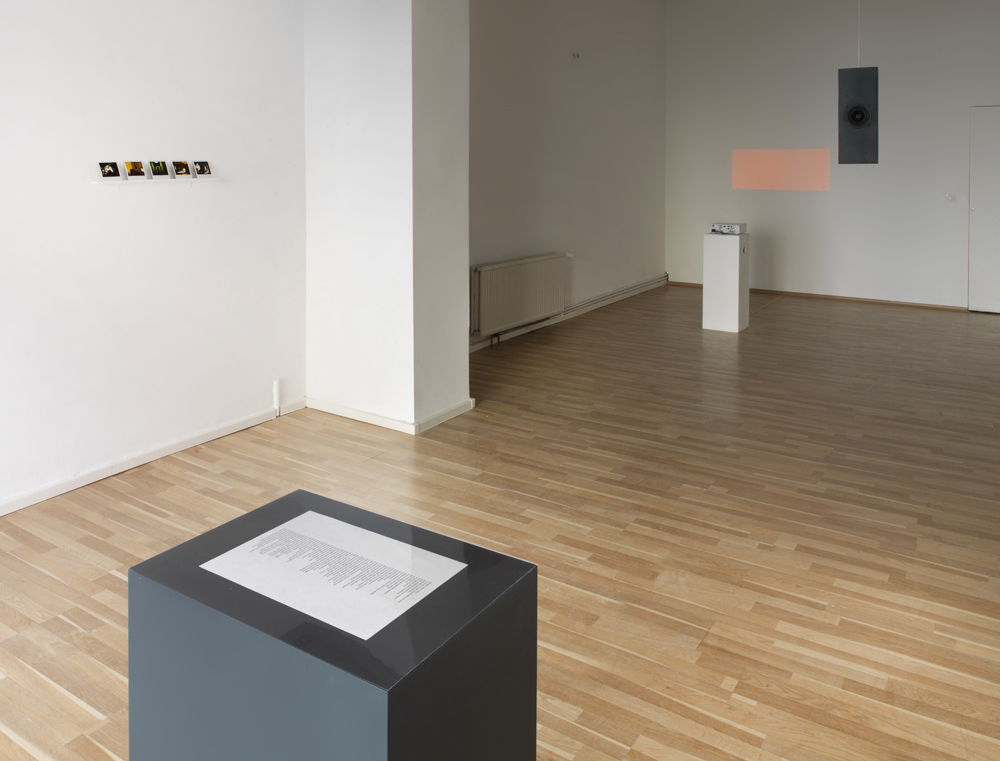 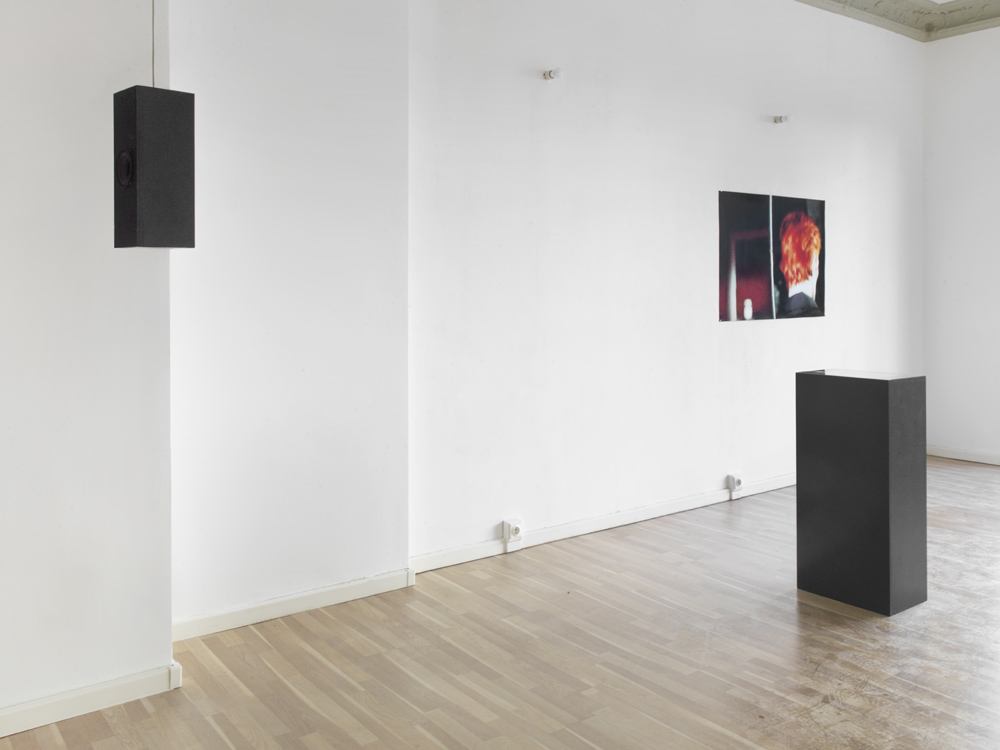 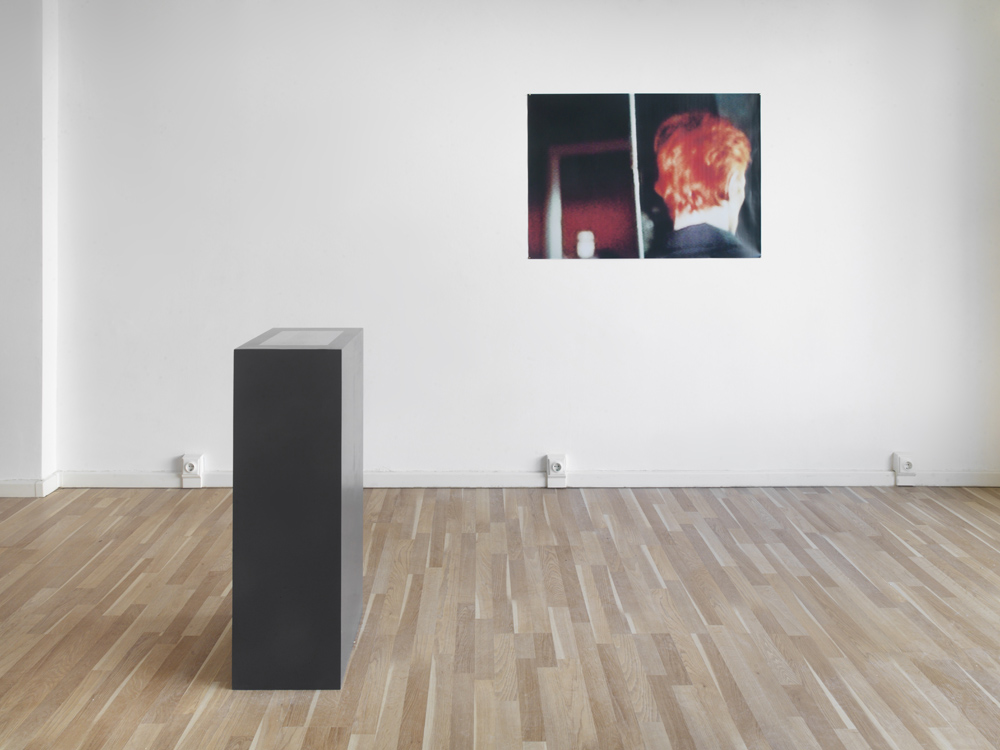 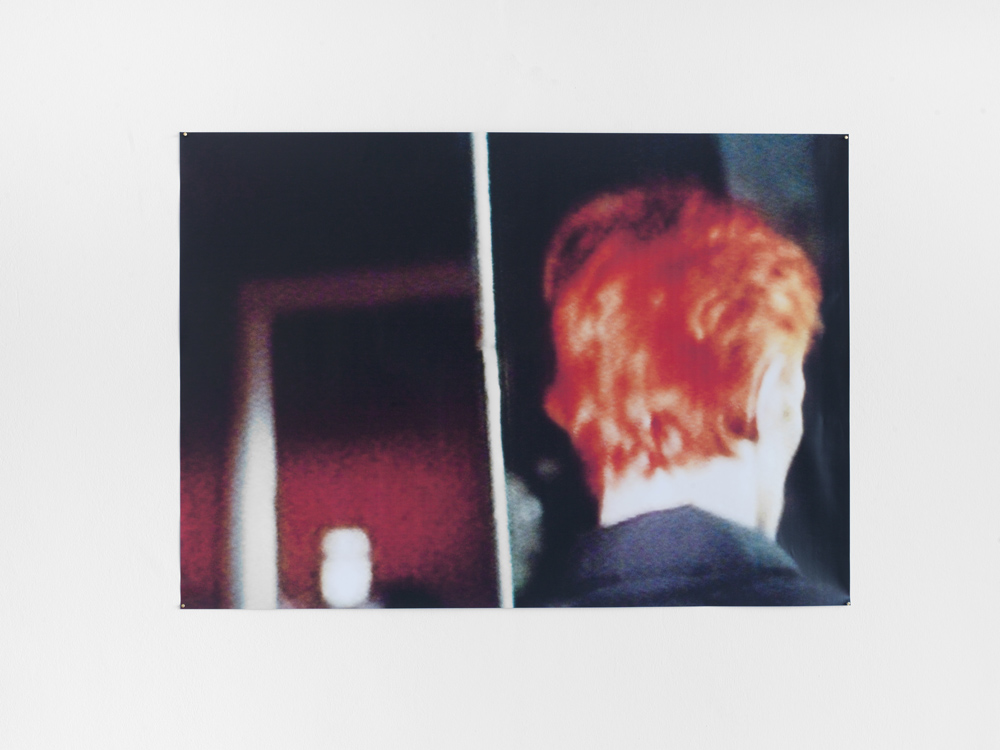 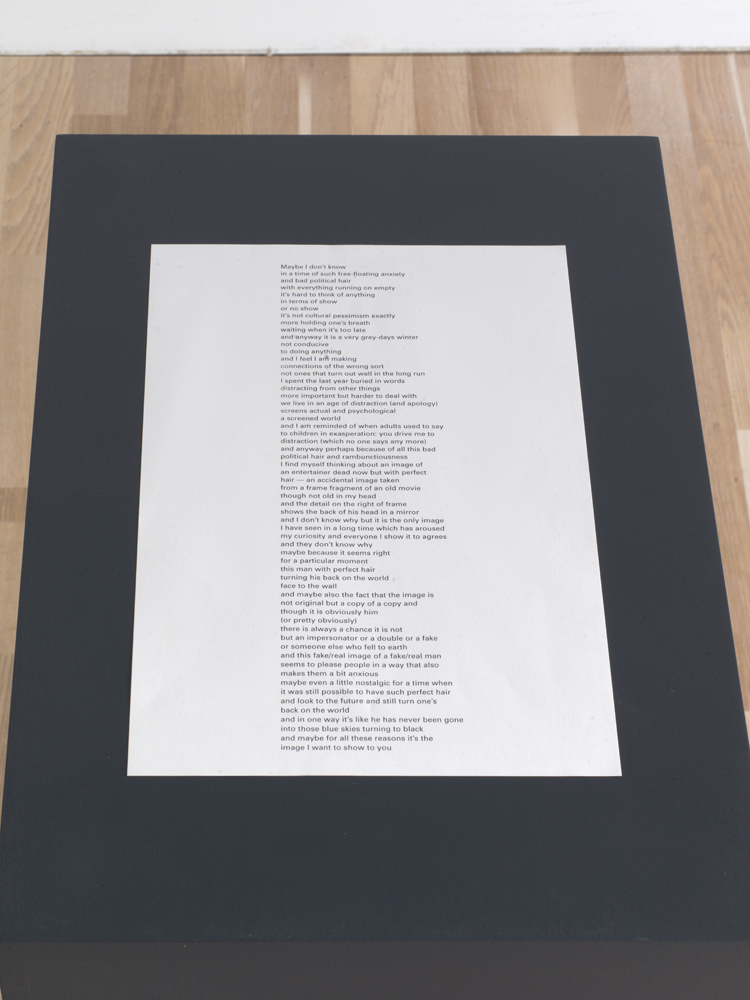 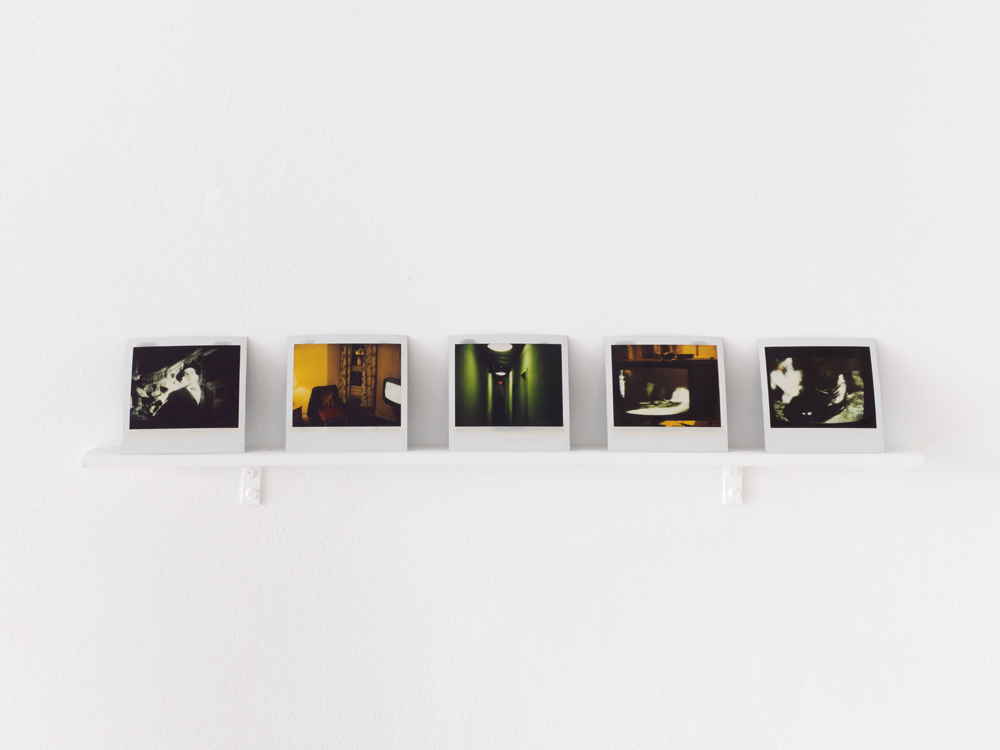 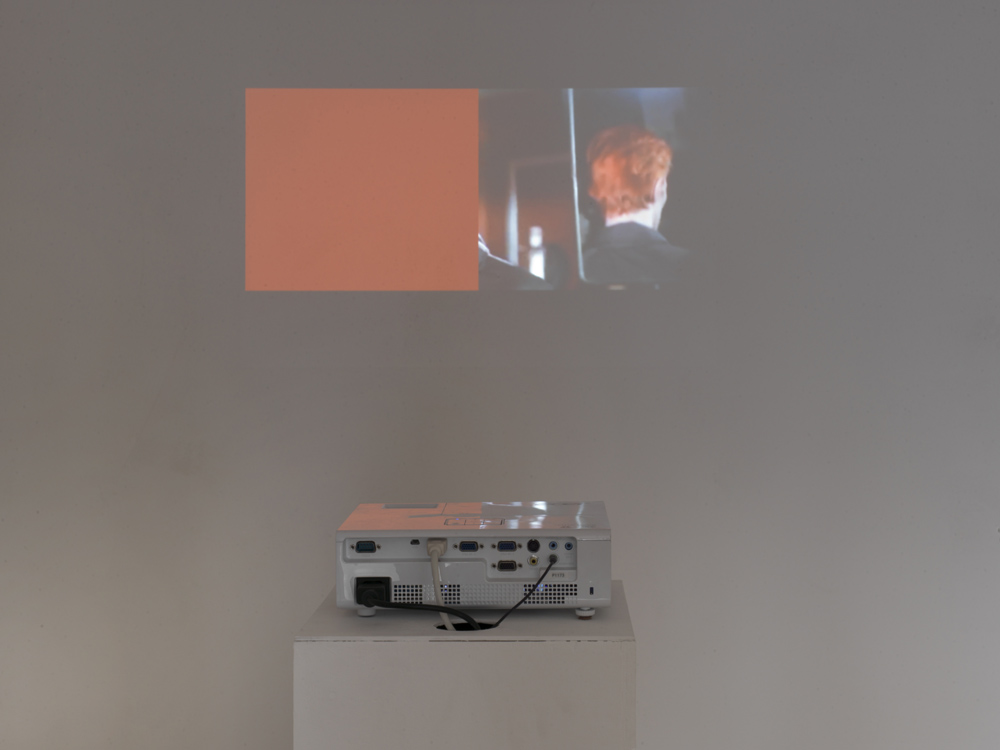 ‘Why add to the vast electromagnetic slums of images?’ was Christopher Petit’s response when we first invited him to produce an exhibition, followed by ‘Perhaps I’ll have a no show.’ I said that could make for a tricky presentation — an empty gallery. Instead, he began investigating how to simultaneously show and not show by withholding and obscuring information using sound and vision. This exhibition reflects on our mass consumption of imagery today — the result of a digital revolution that relentlessly fires pictures into our eyes — and instead gives value to communicating through what’s missing.

In What’s Missing, Is Where Love Has Gone foregrounds a pixelated image of David Bowie taken from the film The Man Who Fell to Earth (1976, hereafter TMWFTE) — one in a series of frame fragments photographed by Petit off television screens through the years, exemplified by the exhibition’s Polaroids (taken in 1993-94). Bowie has significance for Petit for two reasons; firstly, Bowie contributed two tracks to Petit’s road movie Radio On (1979), both written while Bowie was in Berlin; and secondly, a scene in Radio On paid homage to TMWFTE, Petit being fascinated by how ‘Bowie watches a growing bank of TV monitors: surfing,’ prefiguring the explosion of the image bank via the Internet.

In Show No Show (2017), Bowie becomes a mechanism for concealment, leaving space for the imagination to fill the gaps. Playing with scale, blown up to giant proportions and printed on poster paper, the back of his head is depicted, cropped flame-red hair reflecting the light, the angular contours of a pale face nearly in profile but ostensibly withheld. We imagine him turning to face us fully. The captivating image originates from TMWFTE’s pawn shop scene, isolated from the screen’s top right-hand corner, fixing time forever. An accompanying text is both inward and outward looking, this enigmatic shot becoming a catalyst for Petit’s personal reflection on the state of our contemporary world and his place in it.

Sound often expresses what images or words cannot, igniting emotion through invisibility. Coming Down in Berlin (2017) emits from a tentatively hung speaker that sways with the breeze. Mixed by the audio producer Mordant, it interweaves the soundtracks from Radio On and TMWFTE, overlaid with Petit’s spoken stream-of-consciousness. A layered composition of fragmented ambient noise, ominous mechanical ticking slides into pulsing melodies, interrupted by voiceover glitches and the howl of a lone coyote baying at the moon.

Intermingled are sounds from the proximate video Take It or Leave It (2017), Fats Domino’s song ‘Blueberry Hill’ and Bowie’s own voice discernible. Deriving from a low-quality YouTube clip (today’s online space of image overload, fittingly predicted by the layered screens in TMWFTE), the video is manipulated with colour field swathes of red. Bowie is repeatedly fragmented, covered and revealed in a theatre of optical silence. Red is a signifier of danger and pain, love and passion, and here, Bowie himself. Today, we write from a moment in history where Bowie is missing, has moved on, the distance in time between him and us becoming ever greater. In a fast-paced world framed by endless images of ‘bad political hair’, I can’t help but turn to the exhibition’s symbolic title to wonder if it really is in what’s missing, is where love has gone.

Christopher Petit is an internationally renowned filmmaker and writer. His feature films include Radio On (1979), Flight to Berlin (1984), and Chinese Boxes (1984). His film work has been the subject of several foreign retrospectives at the Pesaro International Film Festival of New Cinema, Italy; Buenos Aires International Independent Film Festival, Argentina; and the 49th Hof International Film Festival, Germany. As a writer, his novels include Robinson, The Hard Shoulder, and The Psalm Killer, which was reissued in 2016 as a Picador Modern Classic with an introduction by Alan Moore. His latest book The Butchers of Berlin – set in Berlin in 1943 – has been optioned for development, as has his last novel, The Passenger. Due for UK publication in autumn 2017 is his novel with the working title Requiem for Monsters. Petit is the founder of the art project Museum of Loneliness/Museo de la Soledad that includes the works GoogleMeGod; Fragments of the Lost Civilisation; a vinyl album; and remixes and performance titled Lee Harvey Oswald’s Last Dream; MoL live, Kino in Die Brücke. It has been exhibited in London at the Whitechapel Gallery, Barbican Centre, Sketch Gallery, Building F, and at the Glasgow and Oberhausen film festivals. Petit has collaborated extensively with the writer Iain Sinclair. Their films include The Falconer (1998), Asylum (2000), and London Orbital (2002). In 2011 Petit and Sinclair exhibited their collaborative, immersive film installation, Flying Down to Rio, at Sketch, London.

Louisa Elderton is a curator, writer and editor based in Berlin. She received a Master’s degree from the Courtauld Institute of Art in Curating the Art Museum (2010), presenting an exhibition about Christian iconography in historical and contemporary art. From 2011-16 she curated solo exhibitions by Wim Wenders, Lawrence Weiner, Francesco Clemente, Douglas Gordon, Yinka Shonibare MBE, Nasan Tur and Rachel Howard, and the group exhibitions The Space Where I Am and I Was Once Lonelyness, for Blain|Southern. She has contributed to magazines including Artforum, Art Review, Frieze, Art Monthly, Flash Art, Monopol, Elephant Magazine, Apollo, The Burlington Magazine, Vogue, Berlin Art Link, House & Garden and The White Review. Writing for Phaidon’s Vitamin P3 about new-wave contemporary painters, she is currently Project Editor of their forthcoming Vitamin book, exploring artists’ contemporary use of clay and ceramics.

Jelena Seng is a curator based in Berlin. She received a Master’s degree from the Courtauld Institute of Art in History of Art (2010). From 2010-16 she worked with Isaac Julien, Conrad Shawcross, Francesca Woodman, Hernan Bas, John Kørner, Christian Holstad, and Ian Hamilton Finlay at Victoria Miro. In 2015 she curated Tyrants & Sirens, an exhibition of work by Yana Naidenov and Sofia Stevi for 53 Beck Road, London (UK), as well as Areopagus Königin with Eleni Bagaki, Zoe Giabouldaki, Maria Hassabi, Katerina Kana, Natasha Papadopolou, Tula Plumi, Rallou Panagiotou, Nana Sashini, Sofia Stevi, and Iris Touliatou at Parallel Vienna (Vienna, Austria). She is a founding member of the Chinati Contemporary Council in Marfa, Texas.

Decad is a not-for-profit art space located in Berlin-Kreuzberg taking focus on the mutual influence of contemporary art and critical discourse within the public sphere. Their programme comprises four chapters: bi-weekly artist talks and critical lectures; ten-week exhibitions organised by guest curators; a research library on the socio-political significance of visual culture; and an archive on socially-engaged art practice.

A publication of new images and writing has been produced alongside the exhibition, edited by Jelena Seng and designed by Cskw.