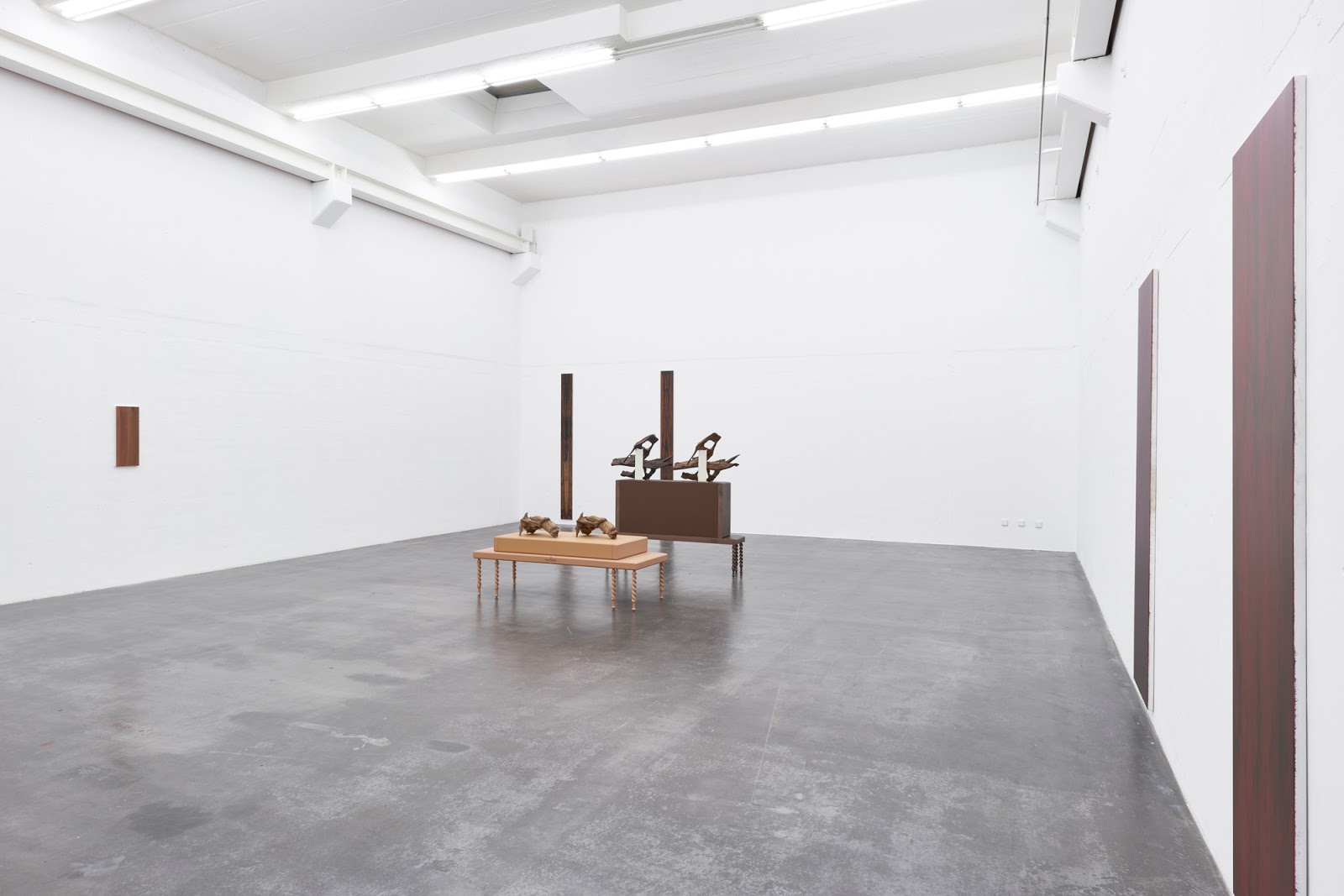 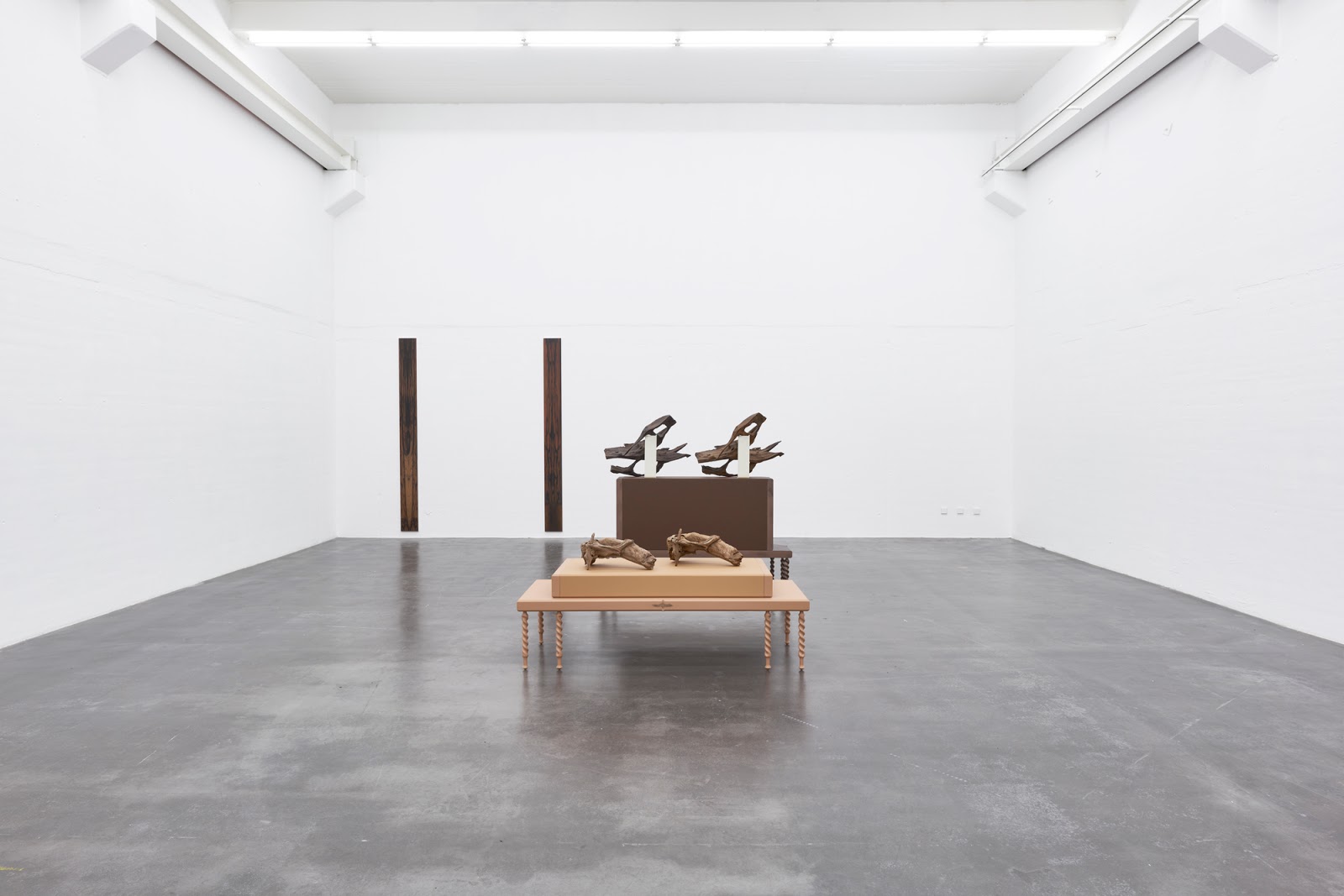 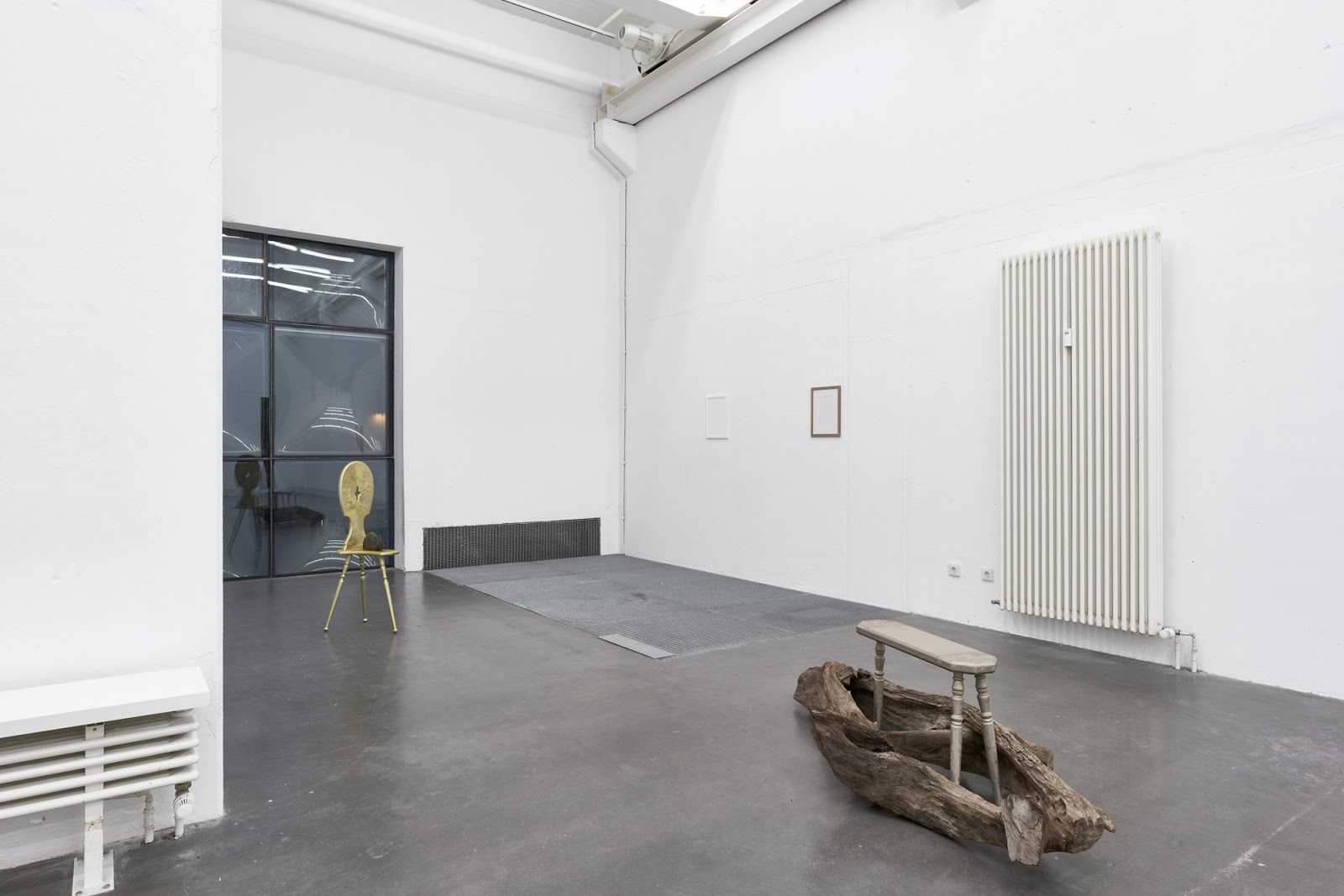 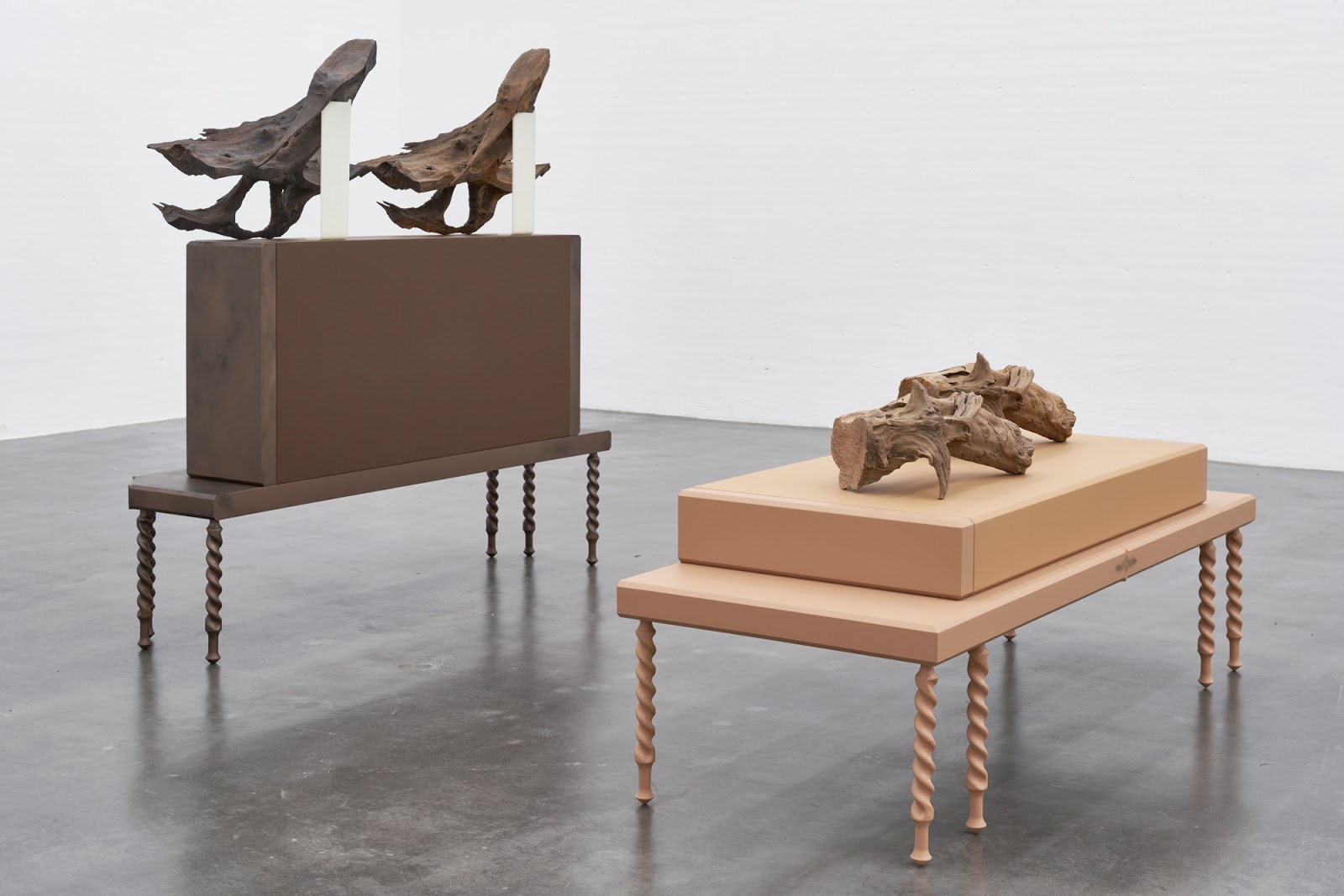 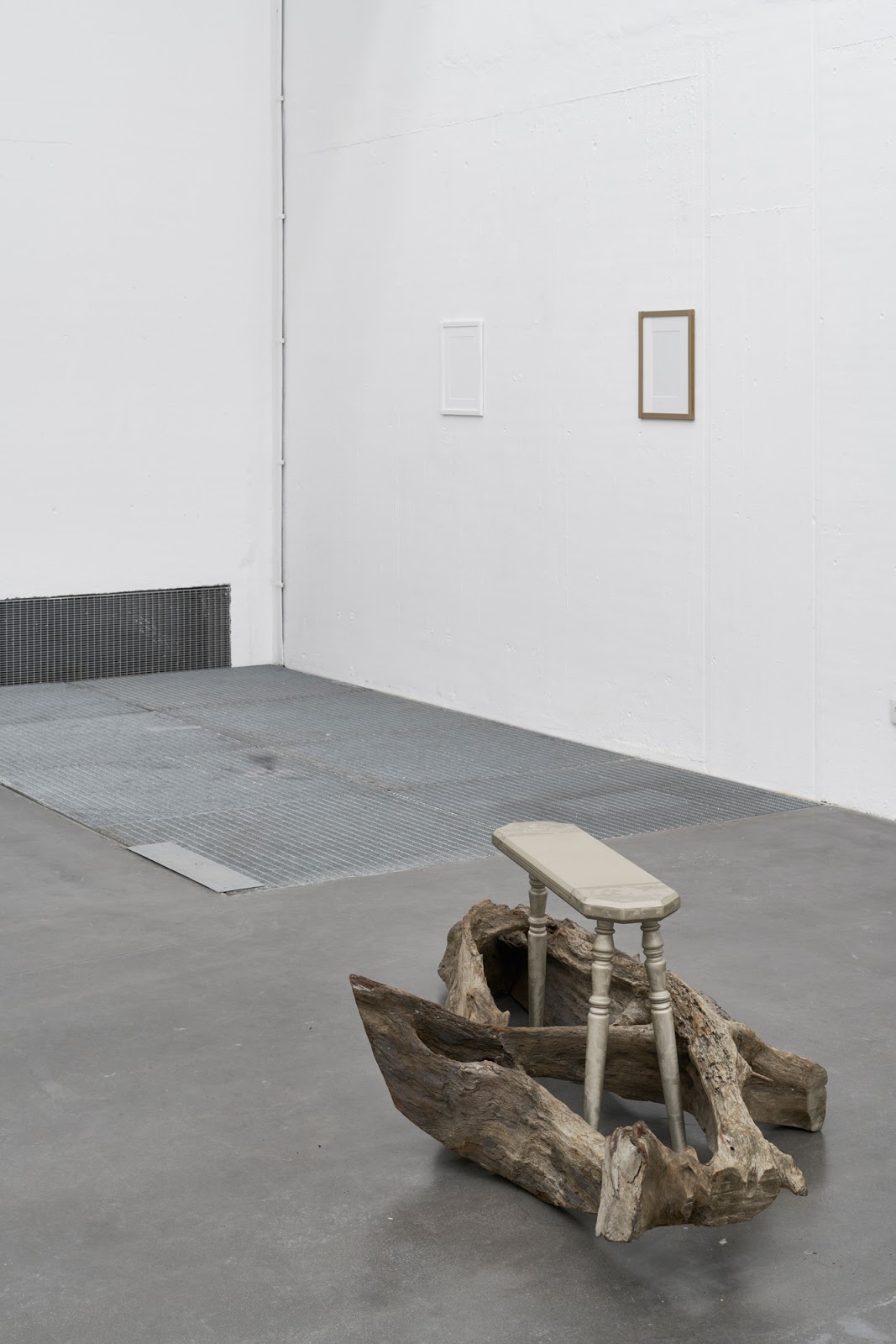 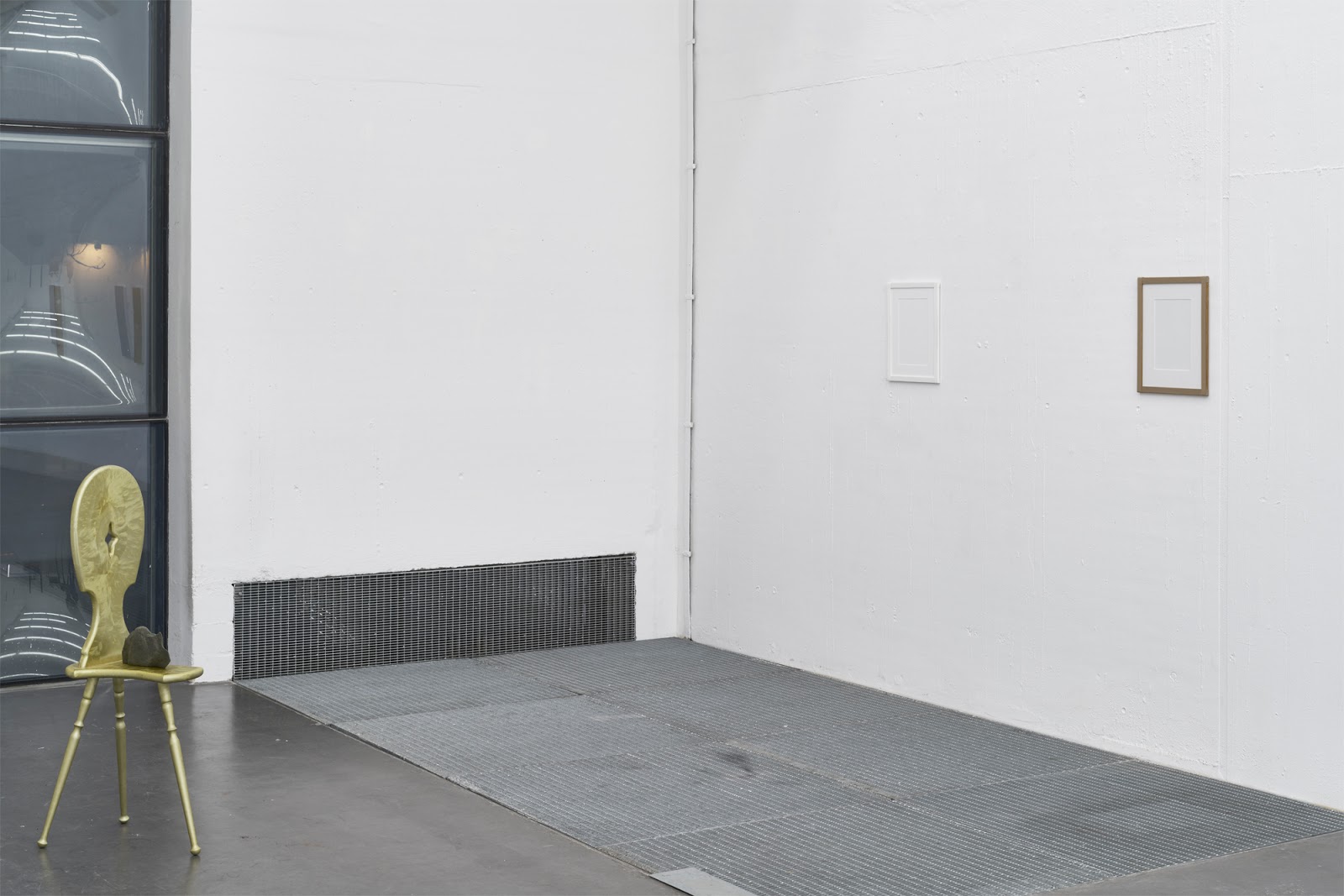 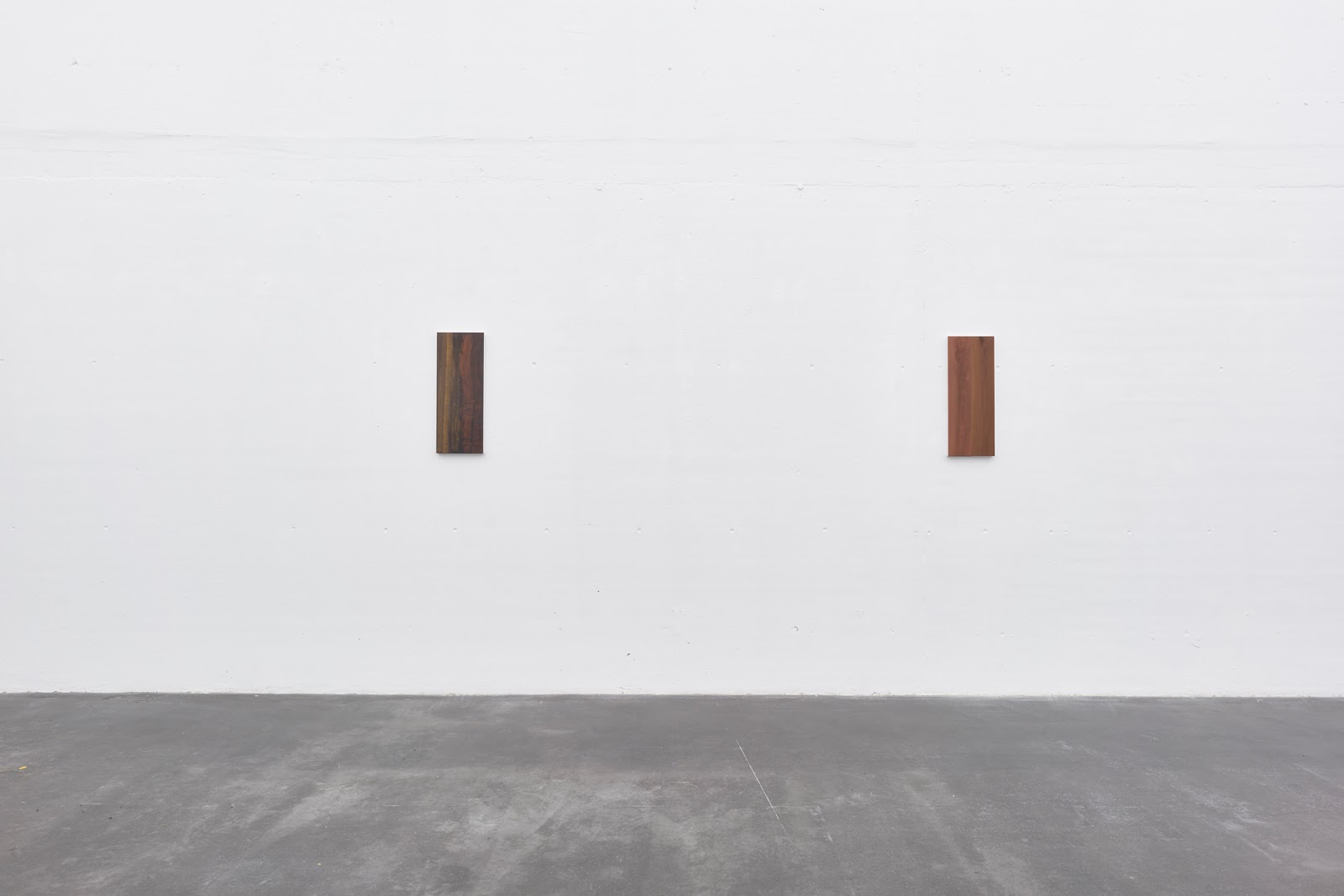 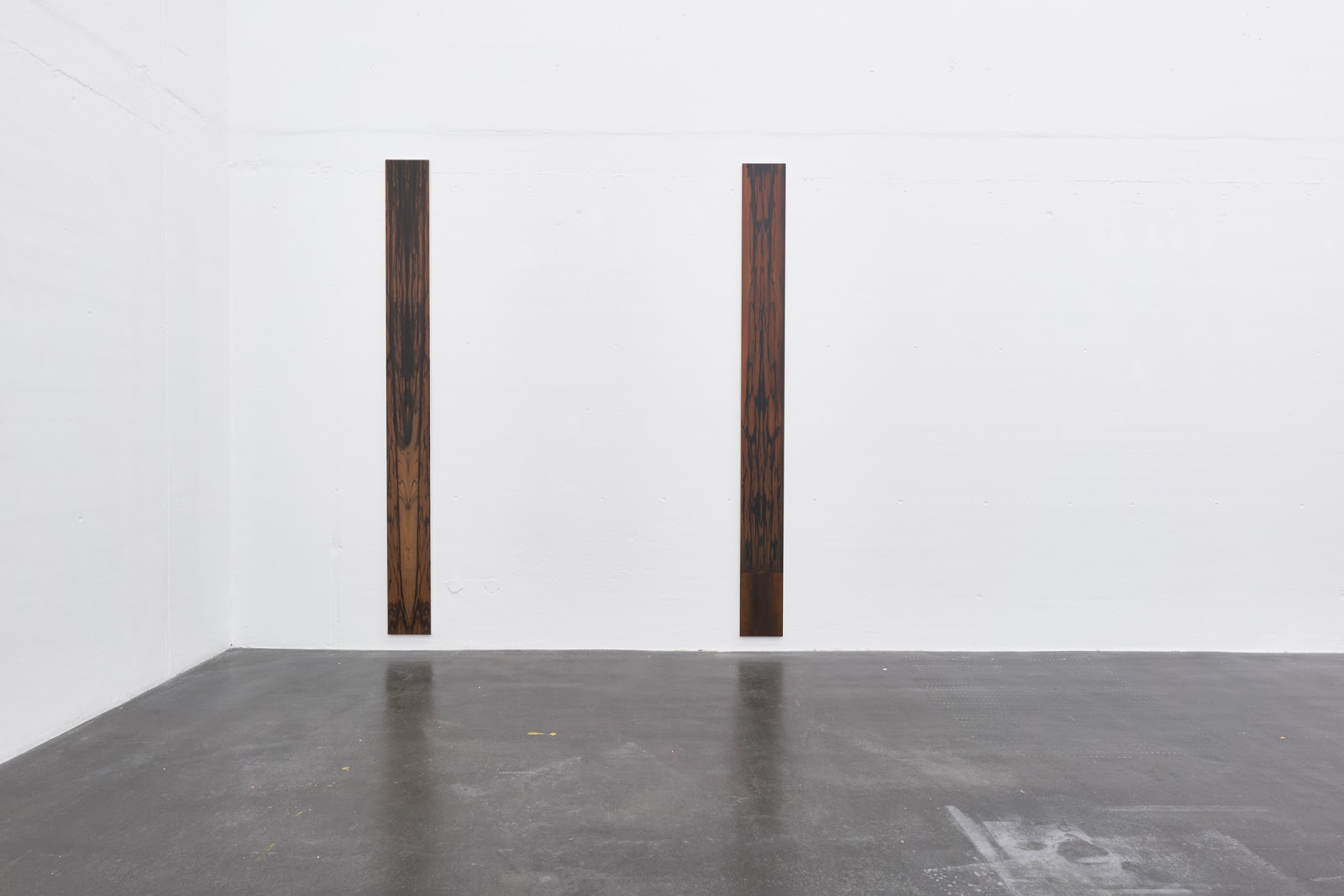 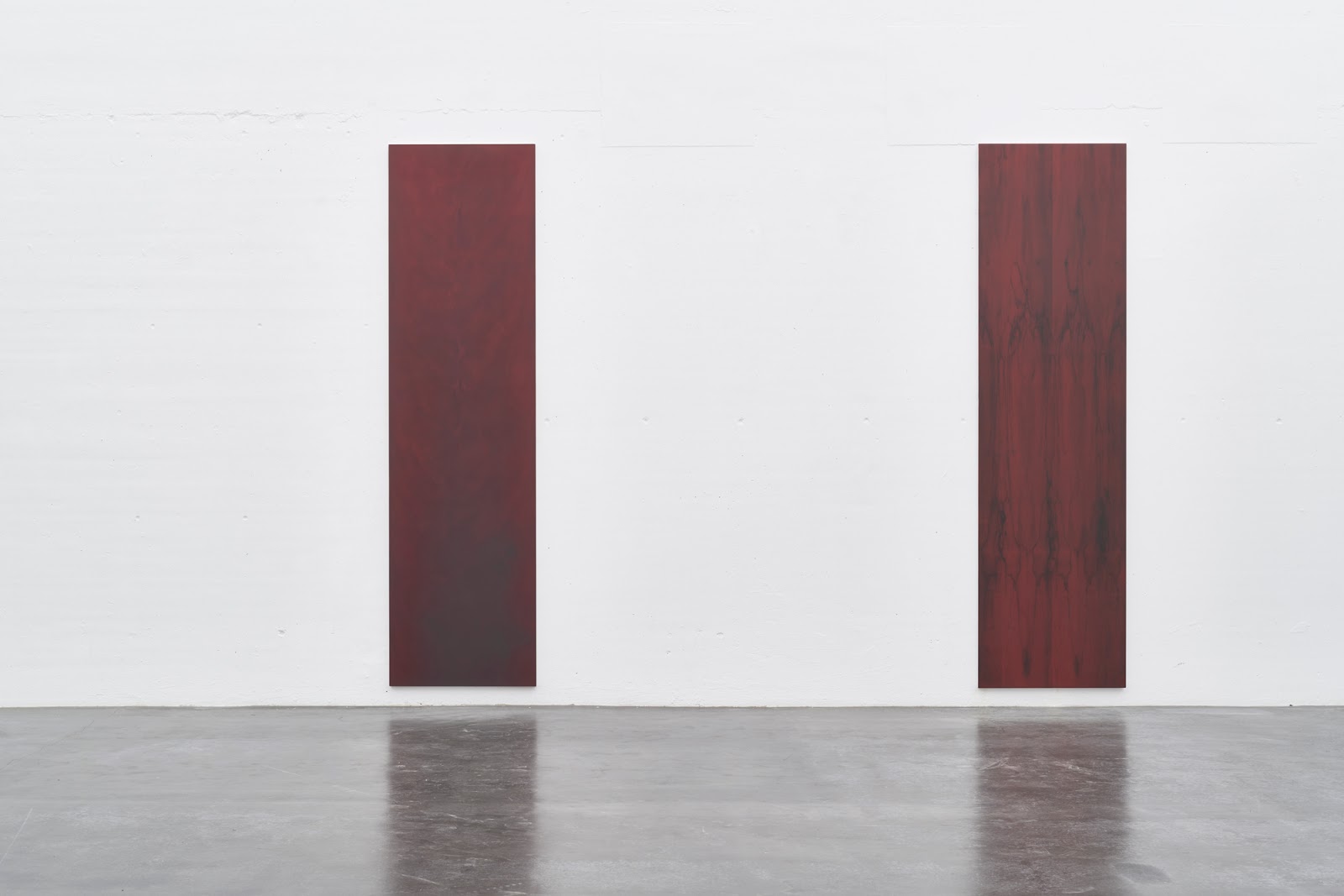 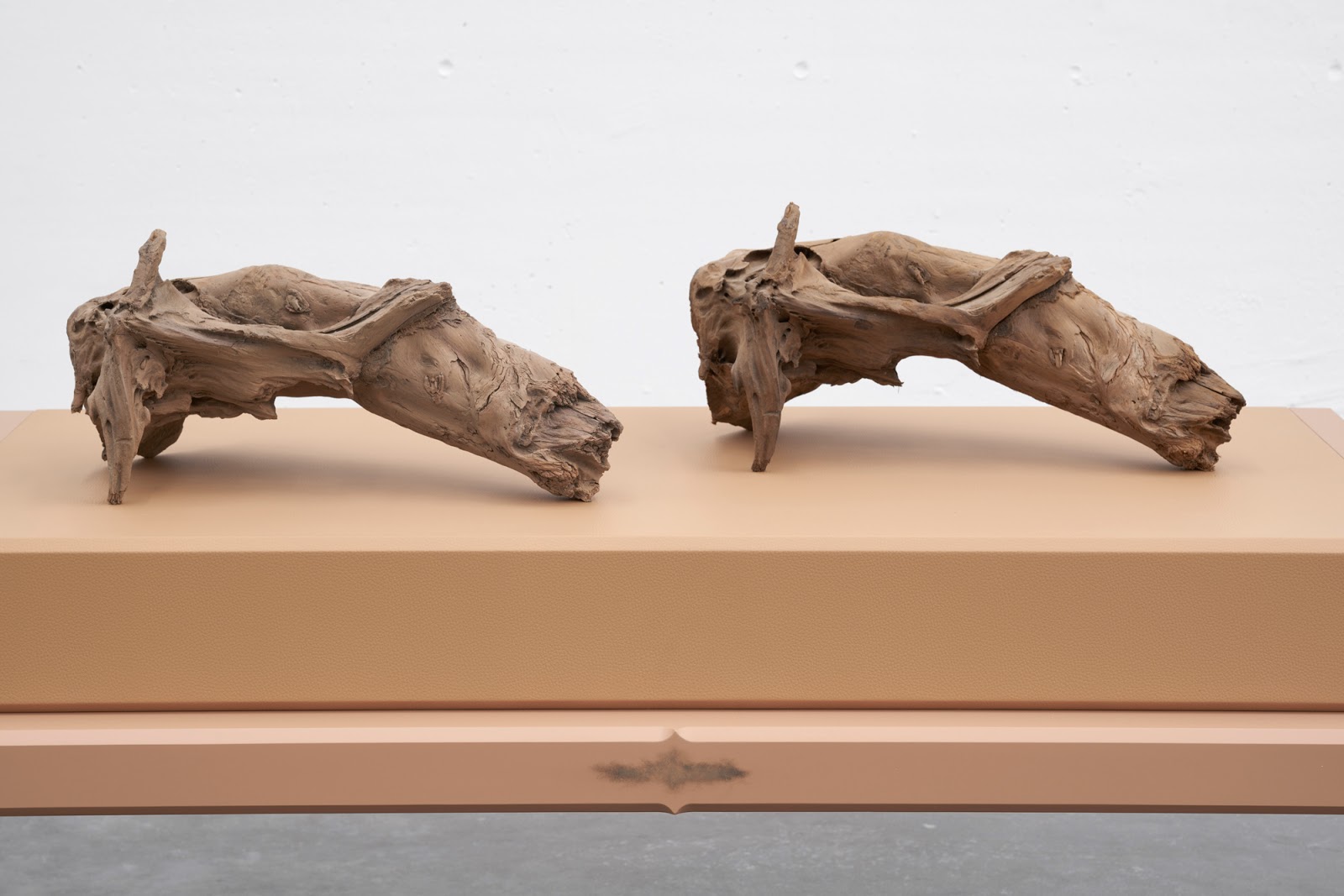 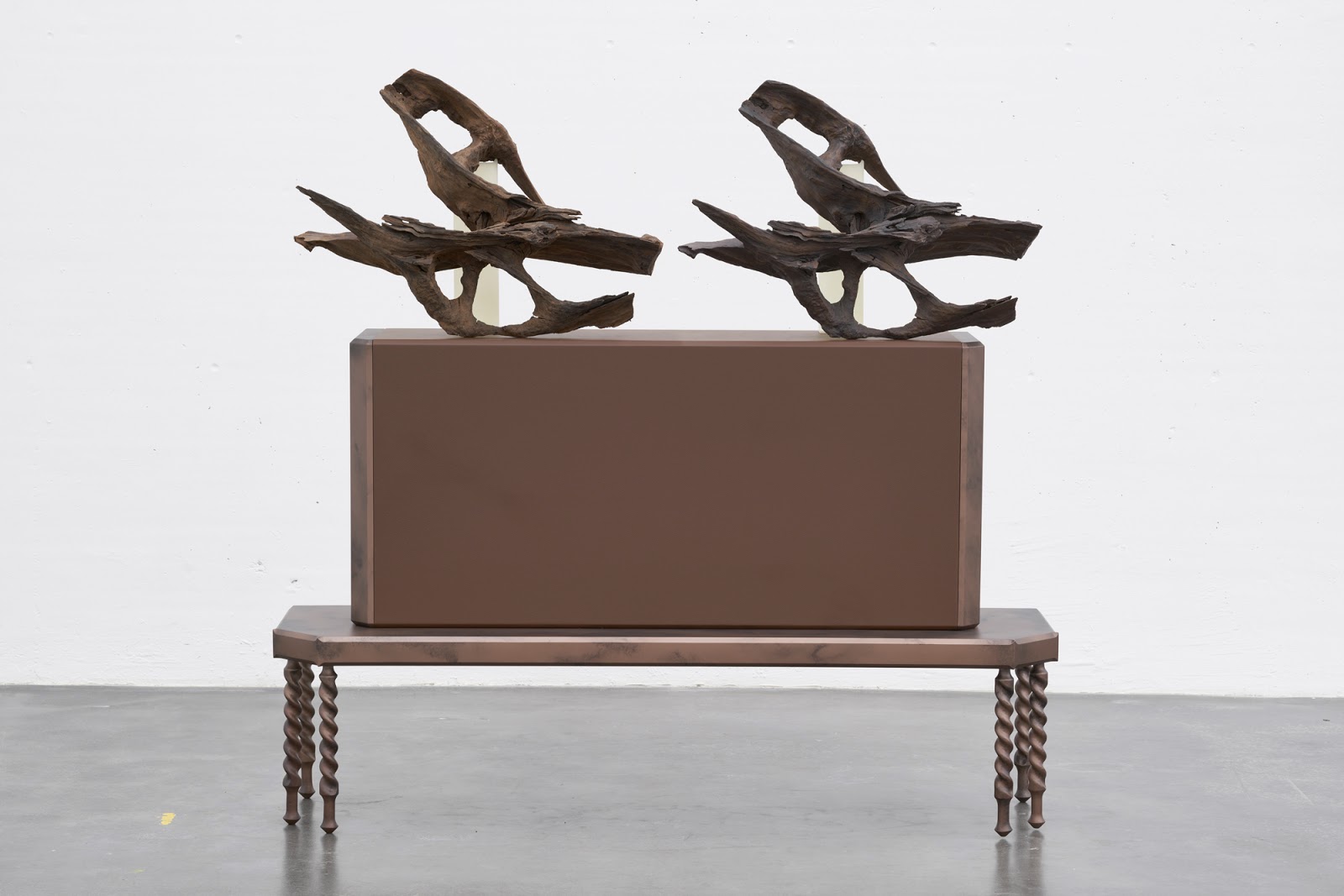 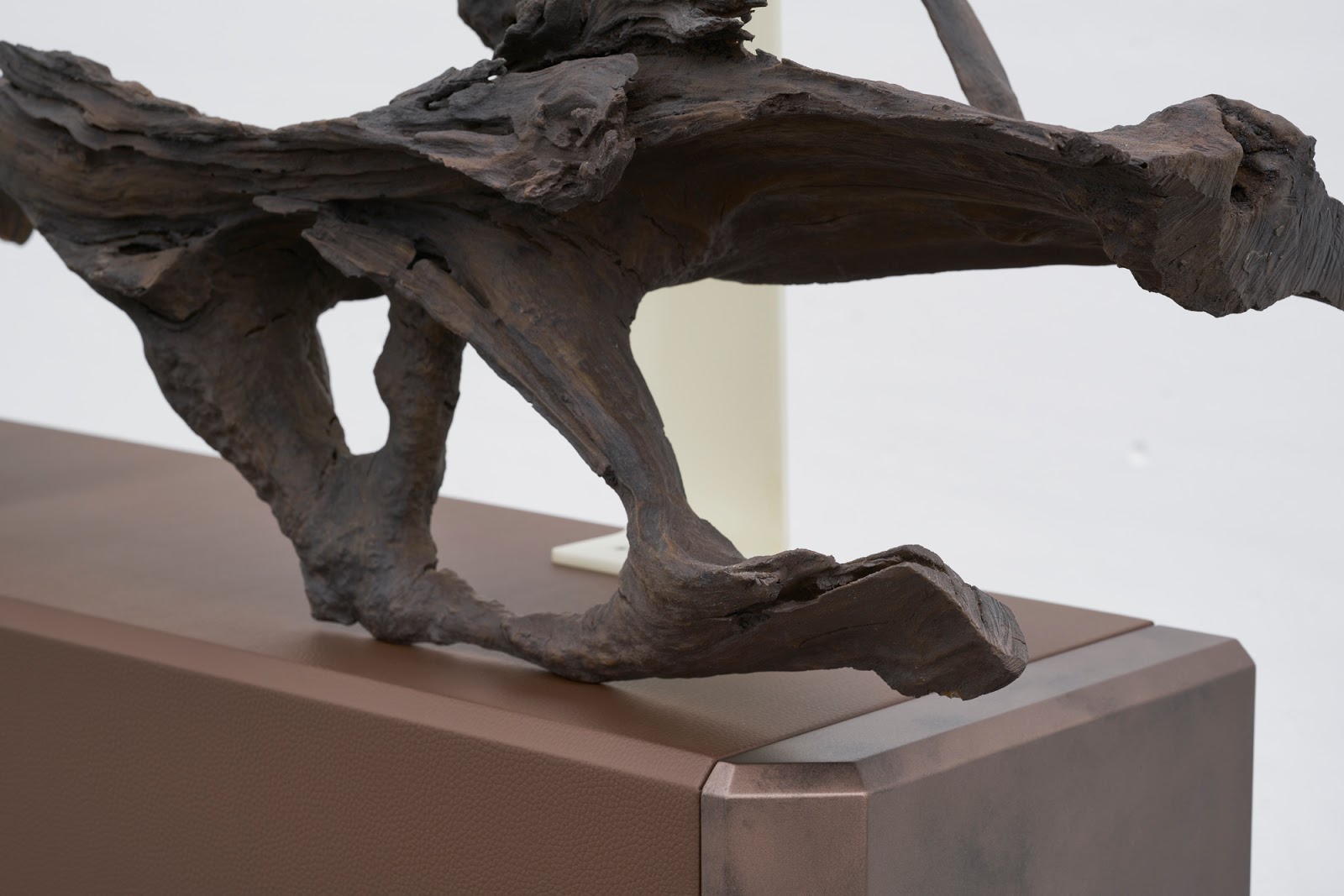 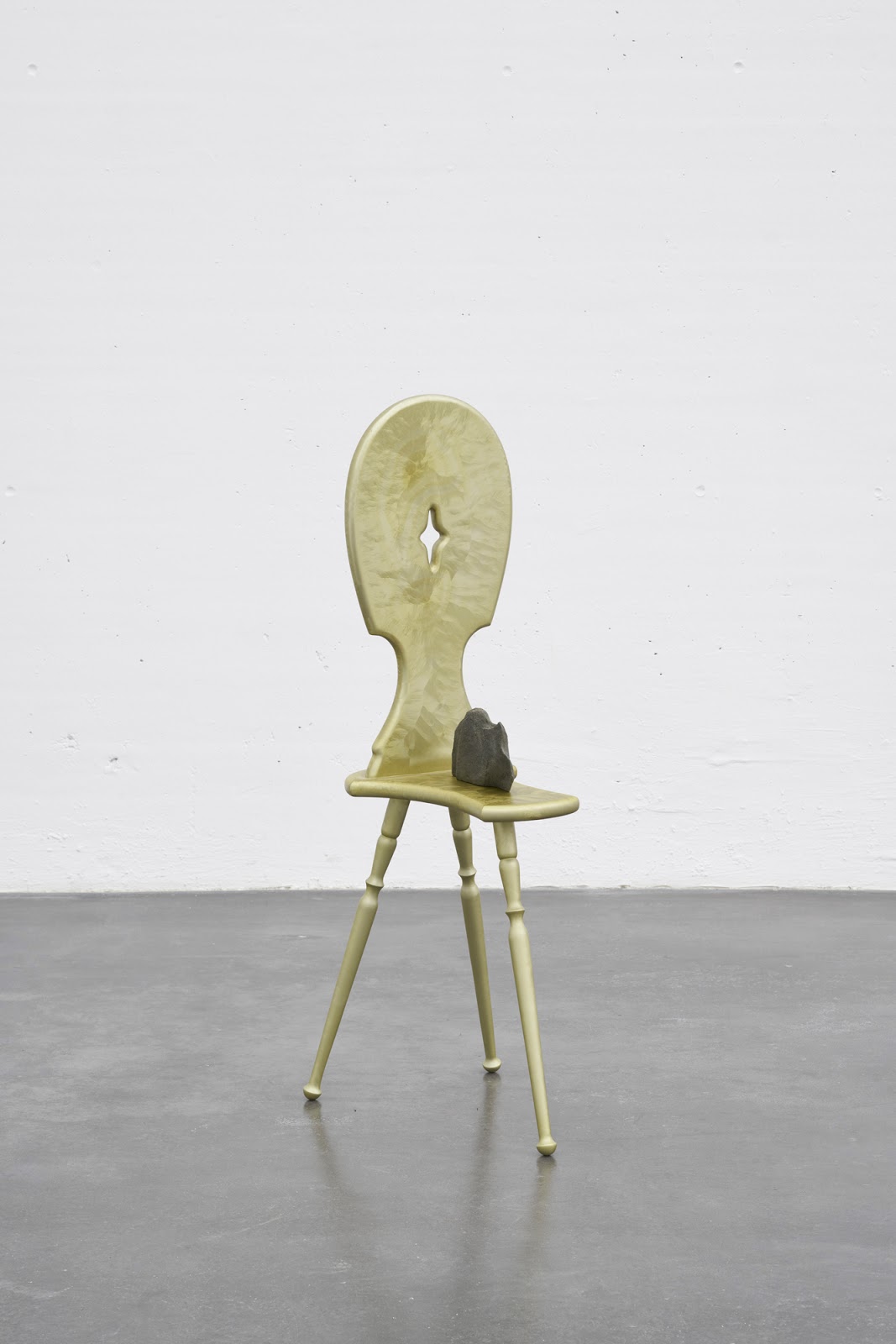 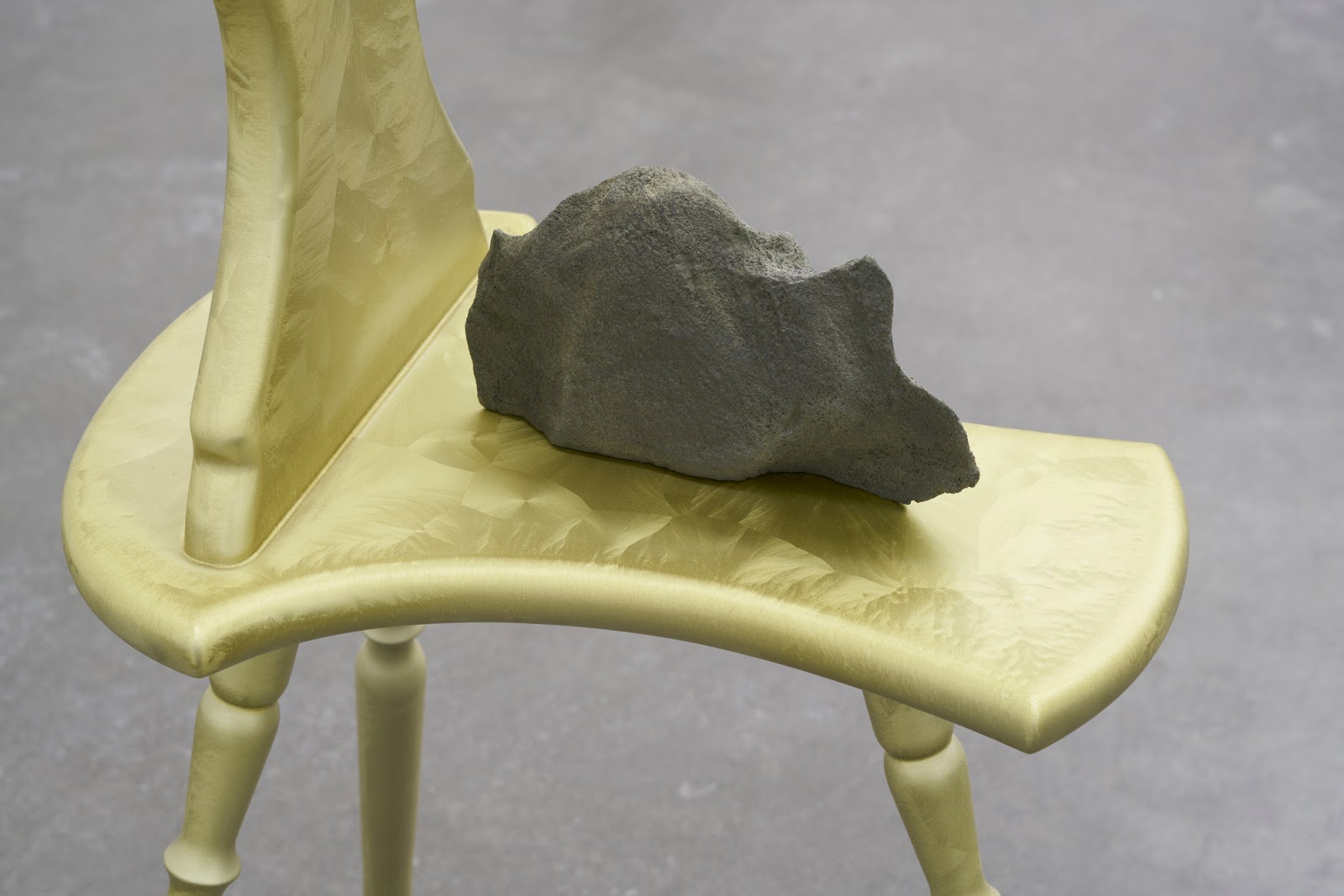 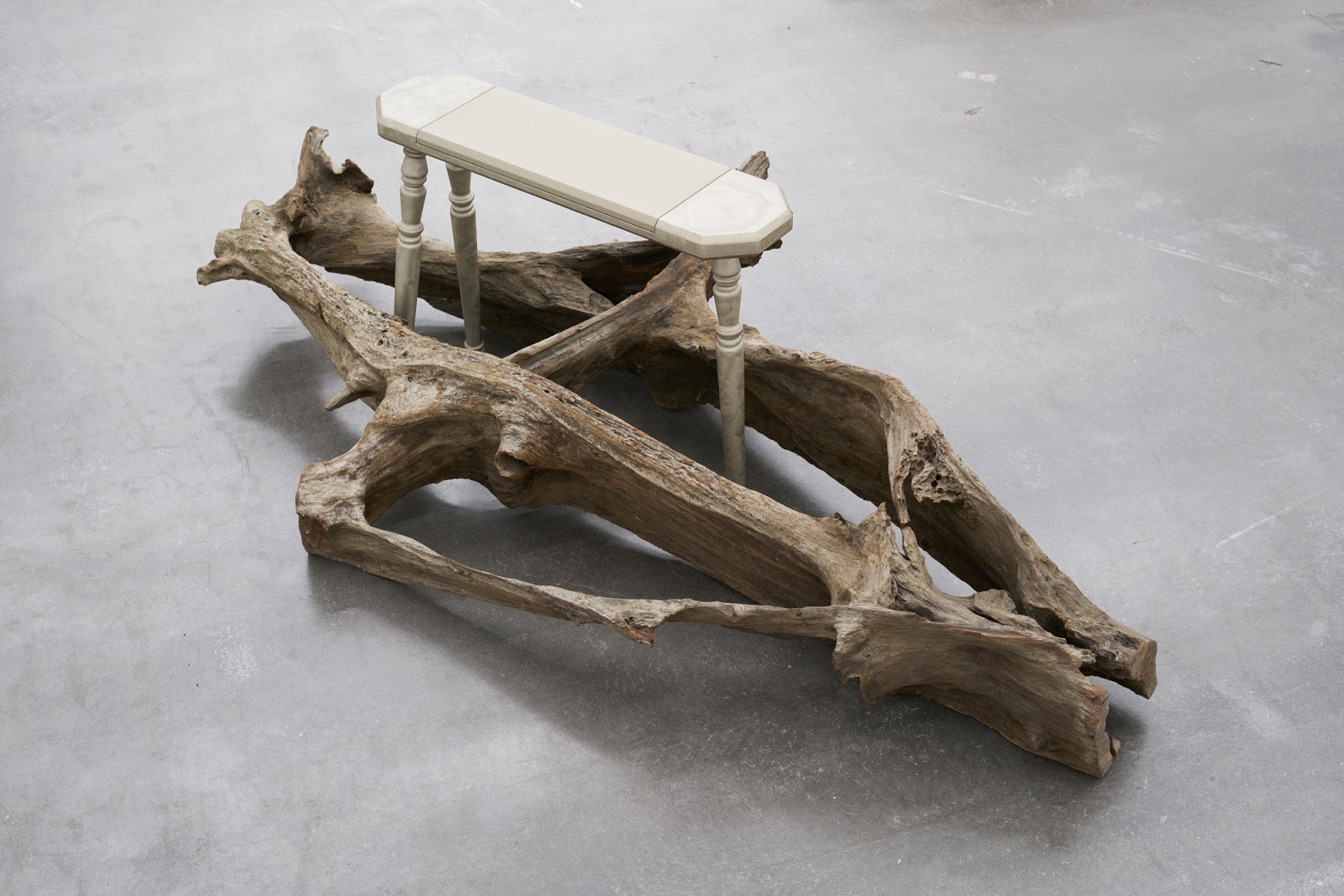 In his current exhibition, The Confidence of Things, Seibel presents three pairs from his ‘Panels’ series (painting on bare or wooden-veneered aluminium honeycomb panels) and sculptures that oscillate between object, objet trouvé (wooden root), furniture, and interior, as well as two delicate pencil drawings of growth structures.

The theme of the ‘Panels’ is defined by the structure in the wood itself: either using real veneer mounted on an aluminium honeycomb panel or as an imitation of woodgrain, painted onto the aluminium panel with the help of pigments and lacquers, as well as special paintbrushes and sanding and polishing processes.

The current exhibition features a sculpture consisting of two nearly identical wooden roots that lie next to each other on a cabinet-like piece of furniture: original and copy. The furniture constructed by the artist appears to be a hybrid from various epochs: Intricately and finely lathed legs are reminiscent of the technical attention to detail and perfection of the Renaissance, while the body of the ‘cabinet’ covered in brown faux leather triggers associations to the sober high-tech design of the 1980s. In strong contrast to this are the seemingly archaic and mighty wooden roots: The one is an objet trouvé, while the other, nearly identical root has been cast in synthetic resin and, similar to the panels, covered by the artist with several layers of finely painted wooden structures.

Whereas previous exhibitions of works by the artist were strongly marked by the rhythms and formal-aesthetic dimensions of natural structures, such as those found in wooden veneers and crystal cultures, the focus of the current show is laid – more decidedly than usual – on the meaning and function of the copy. In this context, the artist is interested in two aspects in particular: ‘the copy as a weapon against the inflation of the concept of creativity’ and ‘the copy as decoy for verticality’.

On the theme of ‘the copy as a weapon against the inflation of the concept of creativity’, Seibel states: ‘Copying is the opposite of original creation, which is so characteristic of the artistic cliché. Born out of the longing to circumnavigate this stereotype of the creative individual, since nowadays everyone is creative as soon as they compile their Spotify playlists or individualise their iPhones. Creativity and consumption have thus become so strongly amalgamated with each other (at least conceptually and in the perception of the majority) that, for me, the resistance against the consumerist cult has led to an aversion to the obviously creative and individual, i.e. the classically “artistic”. No painterly clichés (gesture, thick layers of oil paint, etc.), no creative outpourings that could be quickly perceived as being “art”. Instead, veneered panels which are reminiscent of doors and table tops, and objects that are closer to pieces of furniture than to sculpture. References to craftsmanship and design instead of to art history. As in earlier works, the copy leads to a rhythm as the return of the same, or at least of the similar. The copy and repetition as an antithesis of the cliché of creativity, as a weapon against the inflation of the concept of creativity, but also as a stylistic means of consolidation, including rhythms, rhymes, and samples.’

And on the theme of ‘the copy as decoy for verticality’, the artist explains: ‘Through the juxtaposition of original and copy (both in the paintings and in the sculptures) and the total blurring of the borders between these, the viewer is motivated to step closer and discover: What is real, what is fake; how can one tell the difference between the two? The viewer is thus drawn into the details and the structures of the works, seduced by the perfect surfaces into the depths of the structures. The result is a vertical analysis of the works, which contrasts with the horizontal processing of information in everyday life. The almost infinite fineness of the details is extremely important in this regard. Instead of in one hundred thumbnail images per second on Instagram (many, but “flat”: i.e. horizontal), the viewer should find his happiness in the infinity of details and structures (few, but “deep”: i.e. vertical). The layer-by-layer exploration of the work through time and patience in front of the original, as opposed to the fast-paced “consumption” of digital mini-reproductions.’
As in his previous exhibitions, this show is also marked by Seibel’s use of contradictions: The wood, the root, the tree and its growth structures as representative and symbol of the natural, the organic, indeed the archaic, is juxtaposed with a world of artificiality (the use of industrial materials, such as aluminium honeycomb panels or lacquer, and techniques, such as sanding, lacquering, casting, and veneering). The artist’s act of copying thus becomes a link between the past, the archaic, the natural and the present and future – and thus becomes a tool to combat the flood of the pseudo-creative.