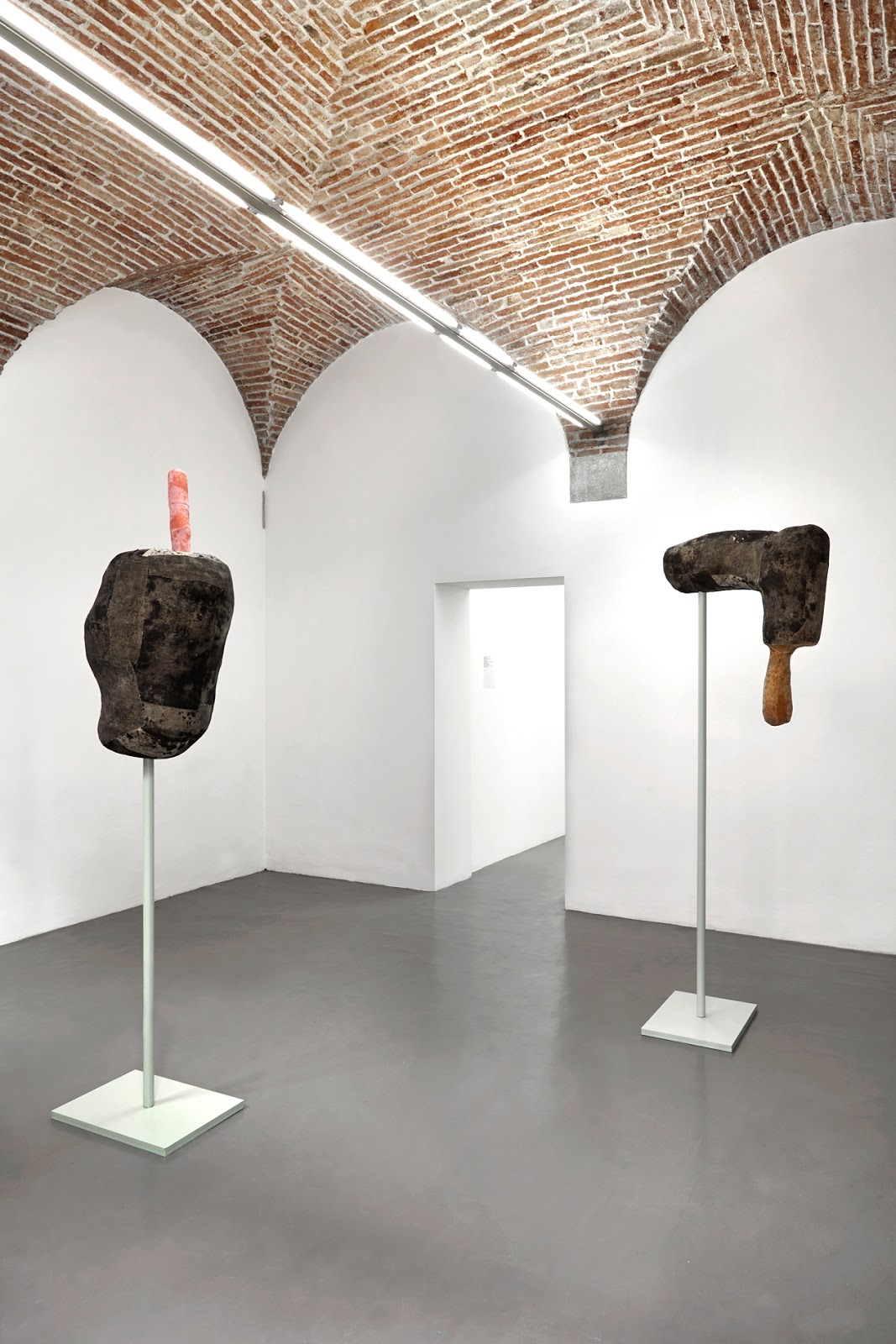 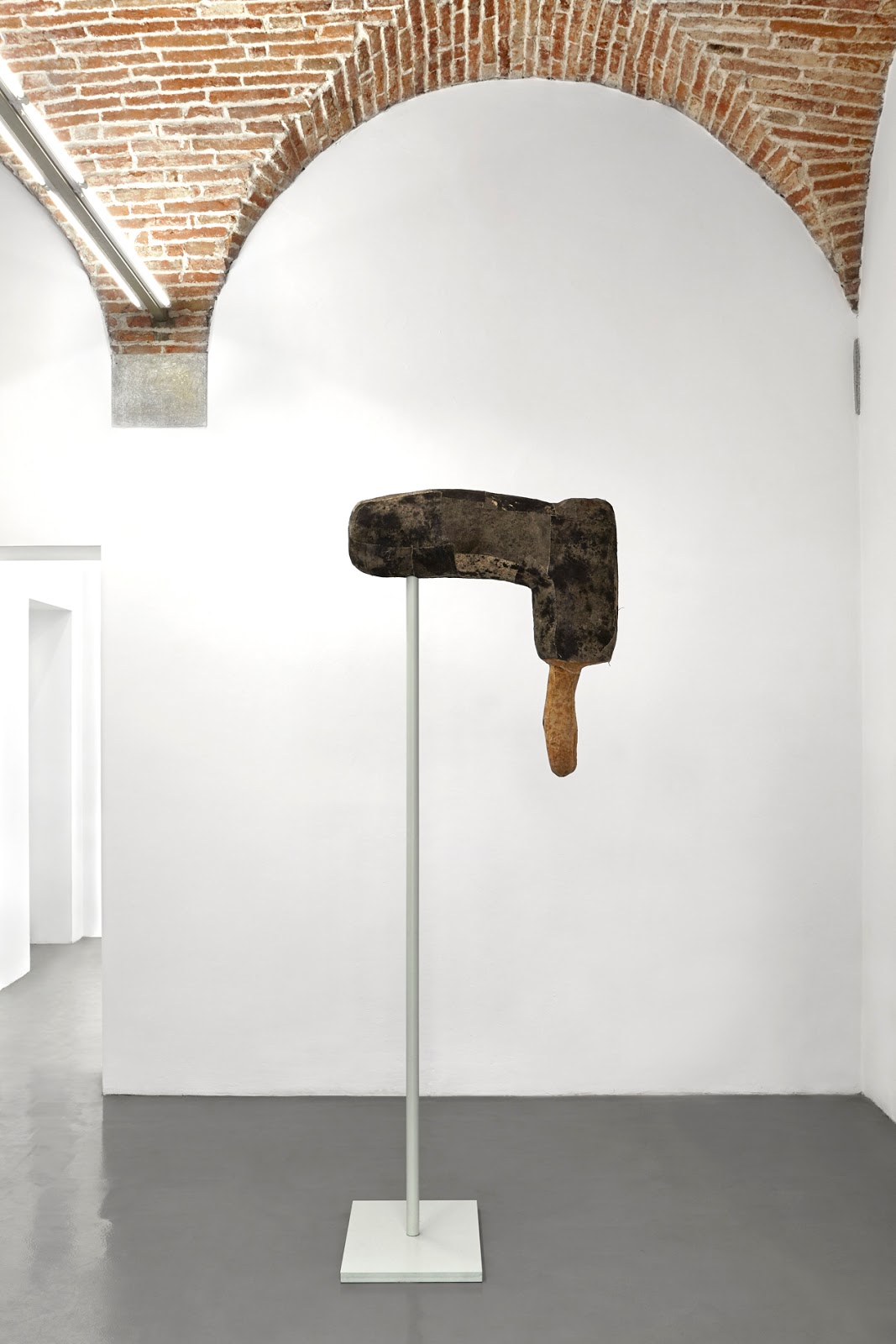 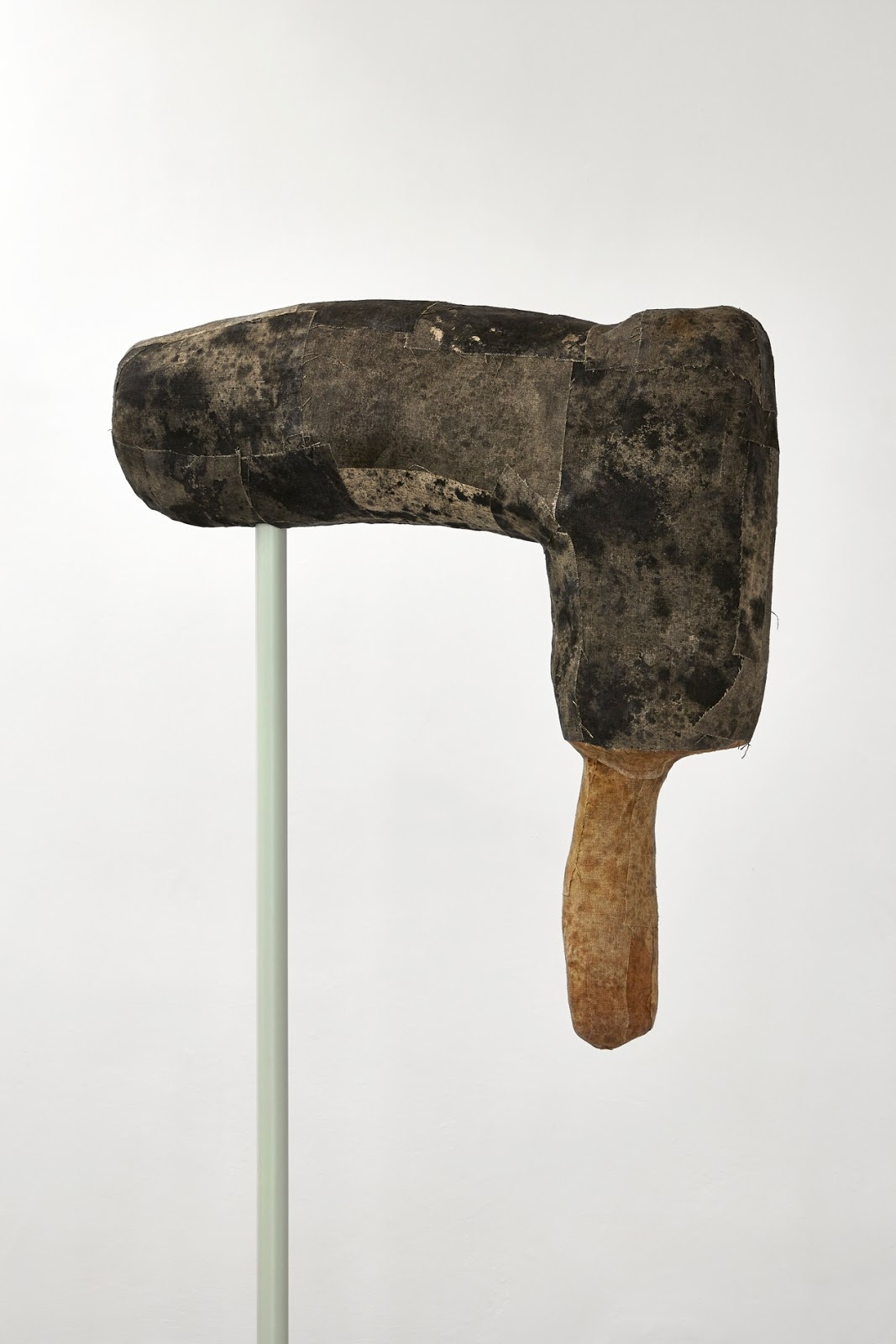 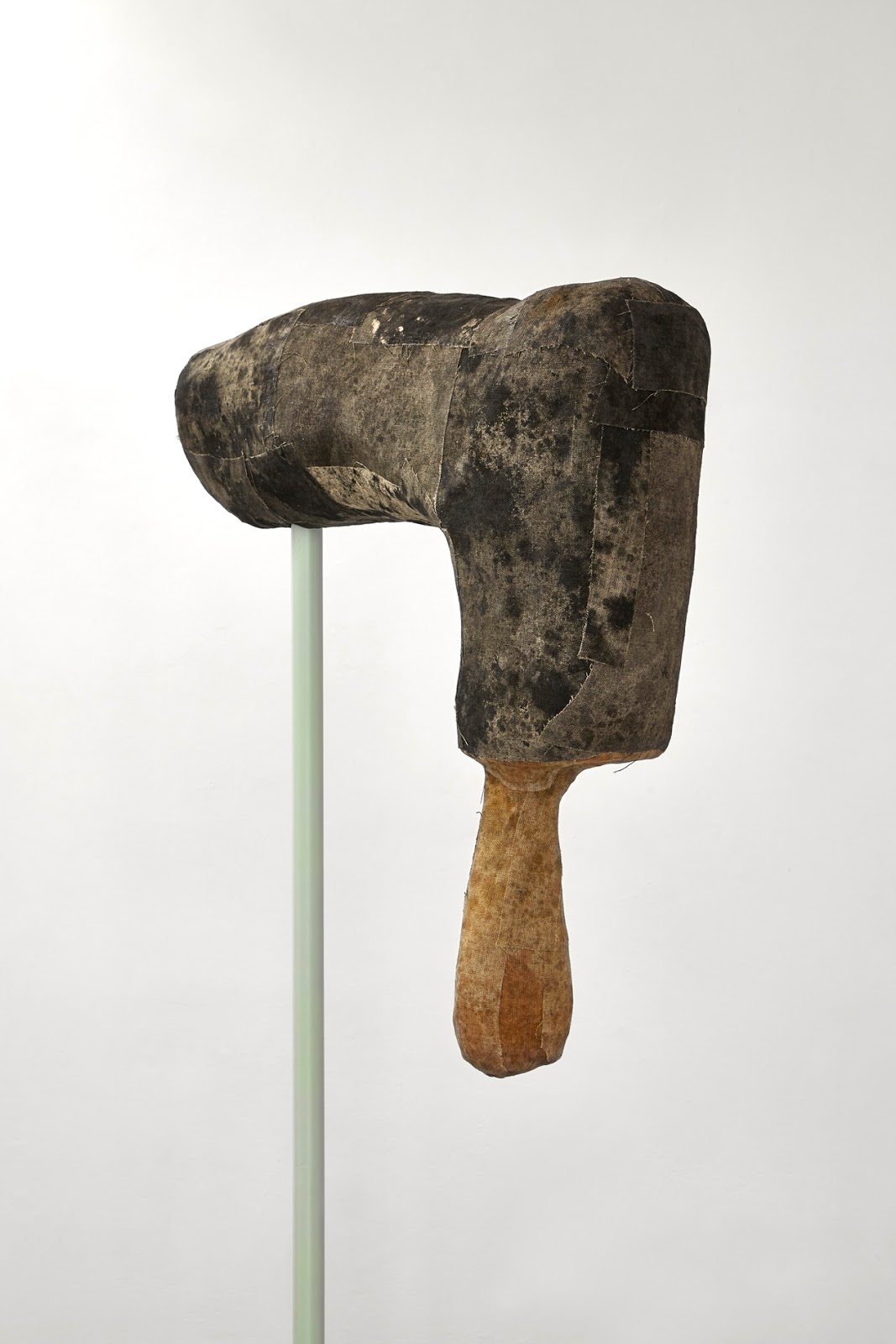 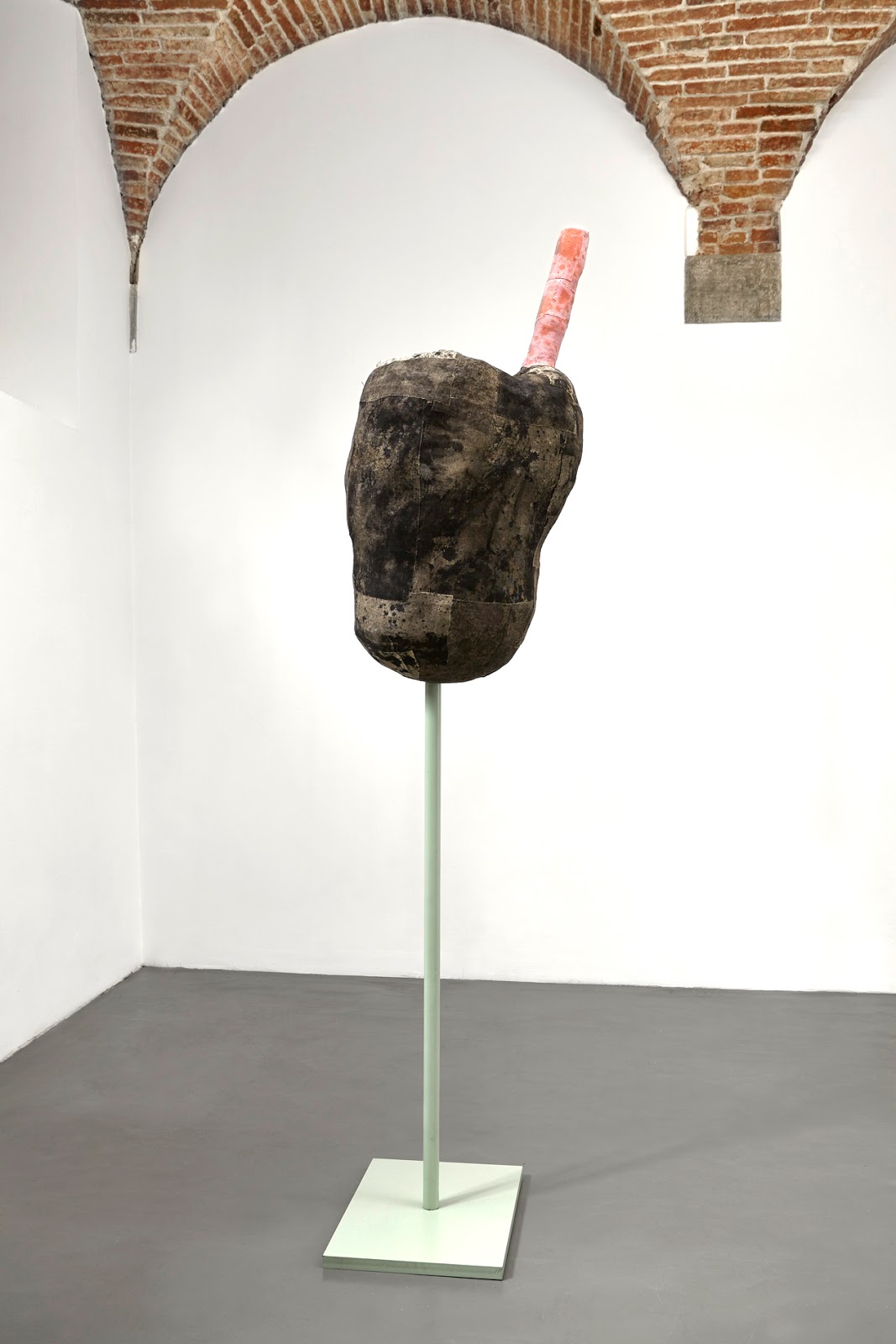 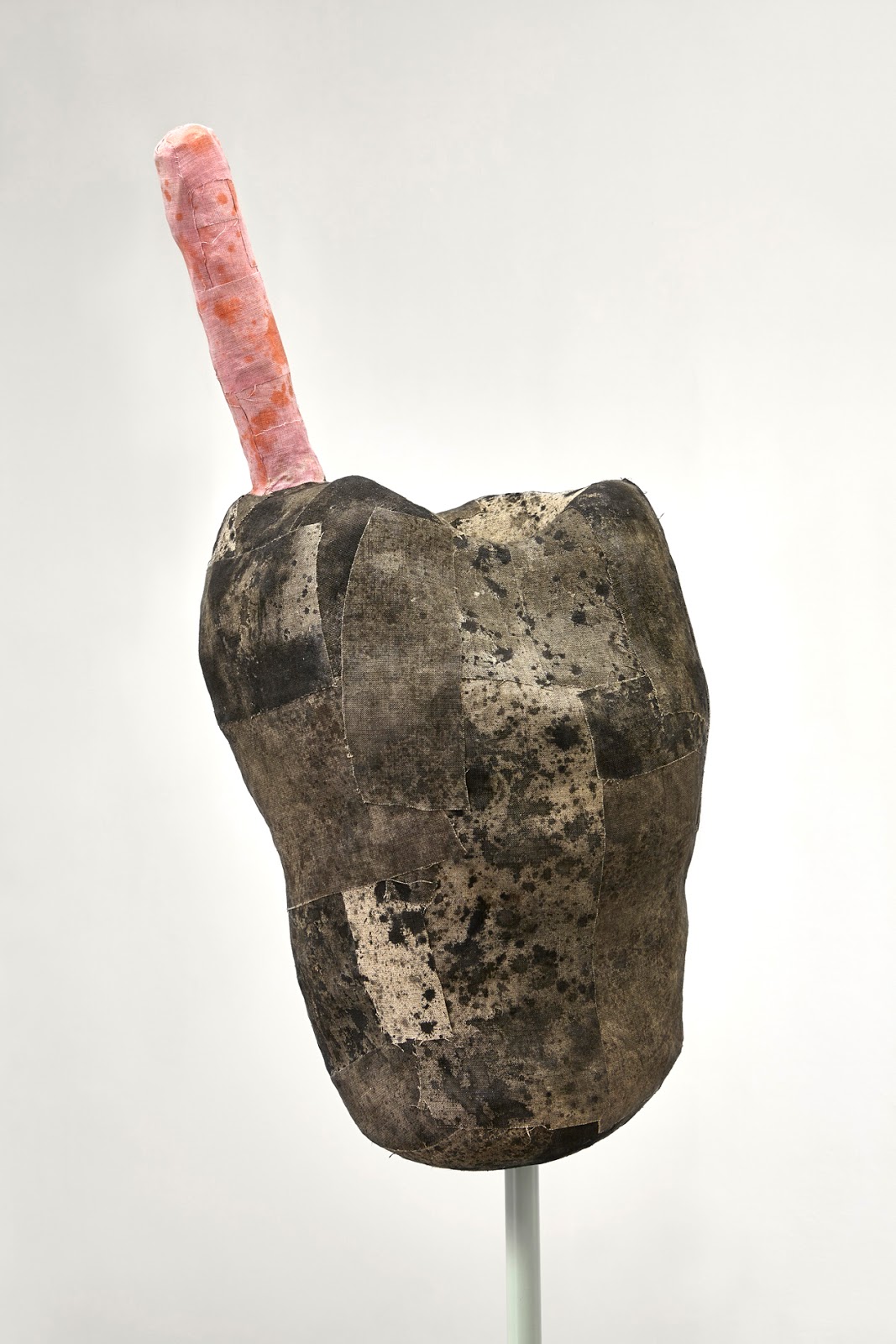 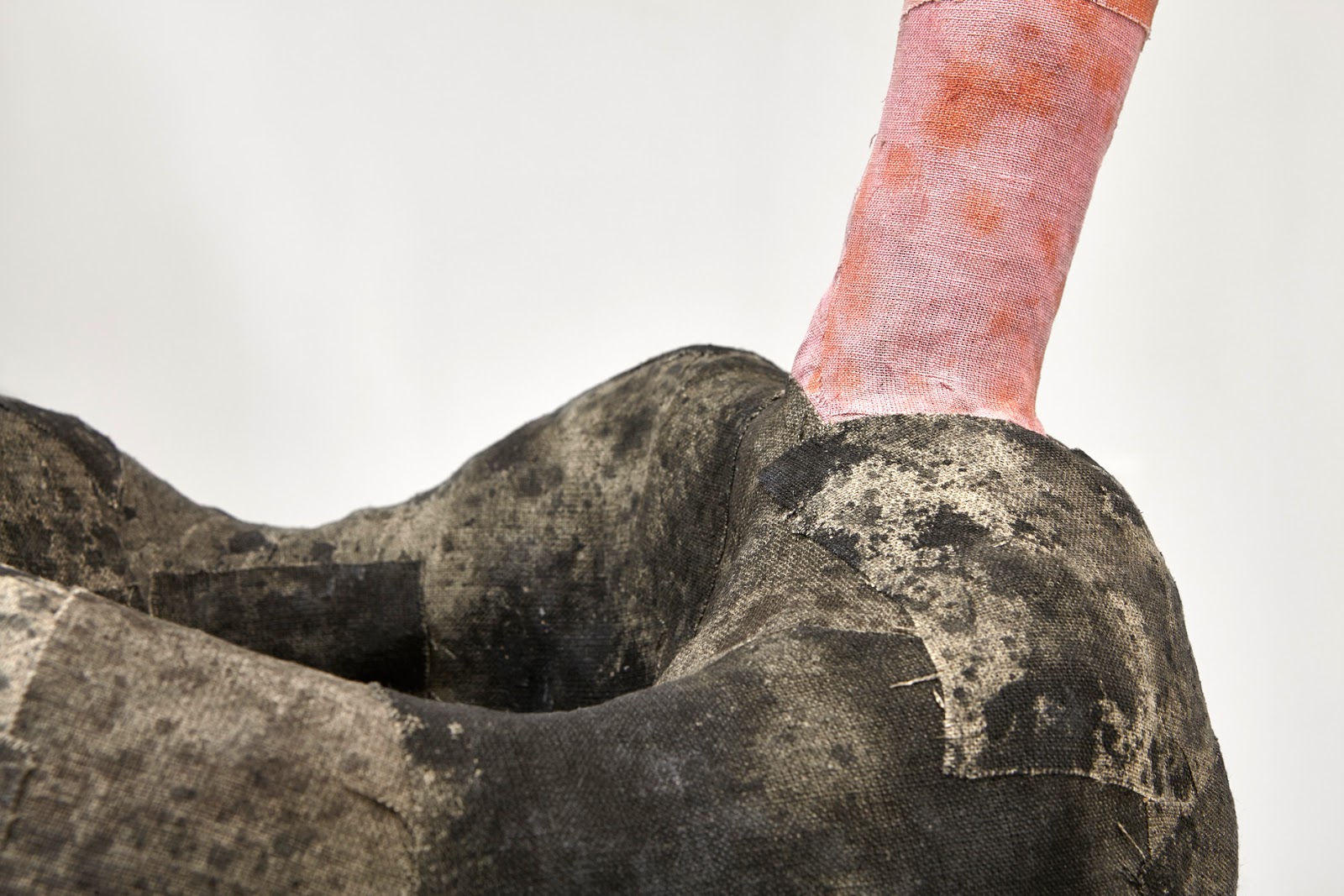 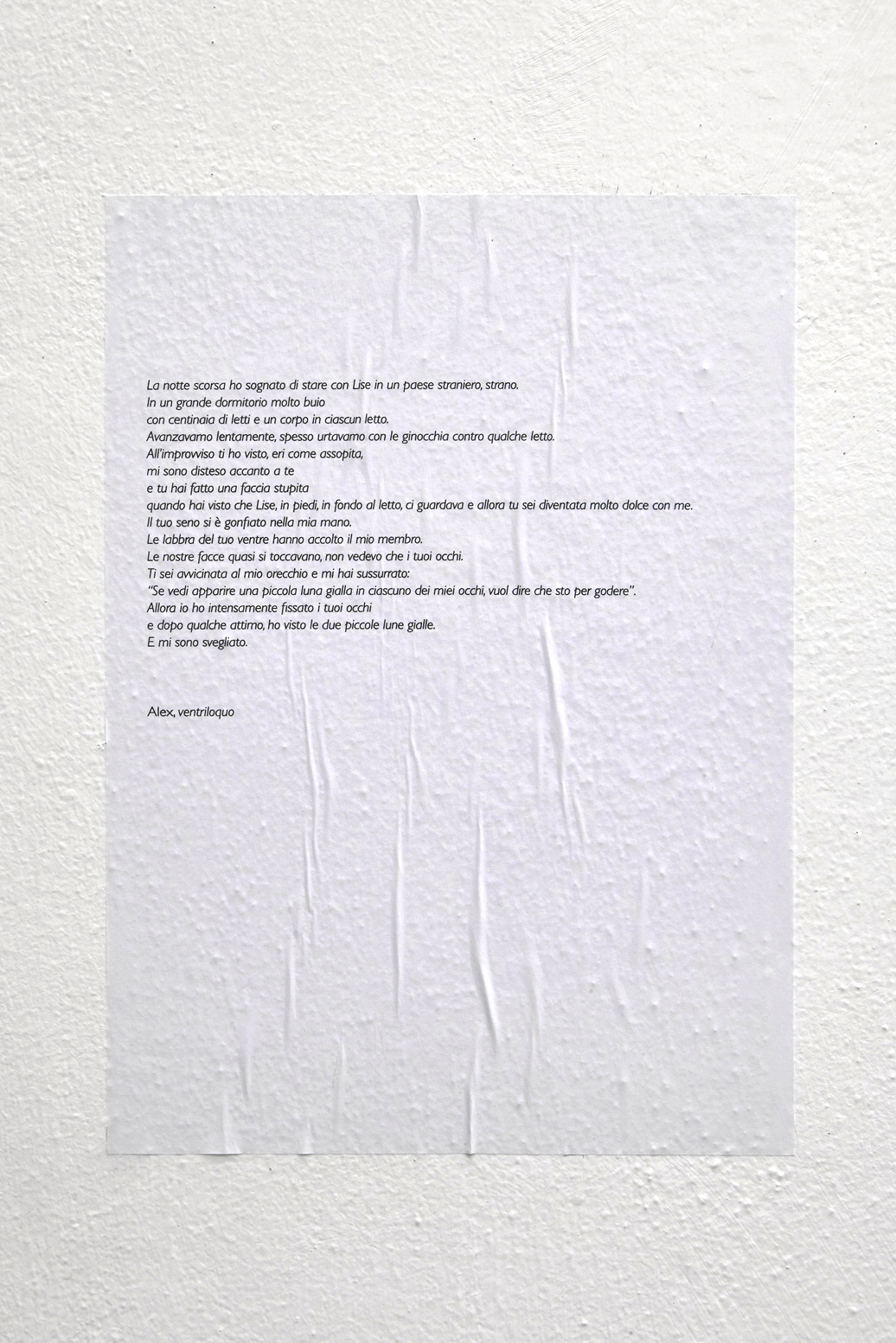 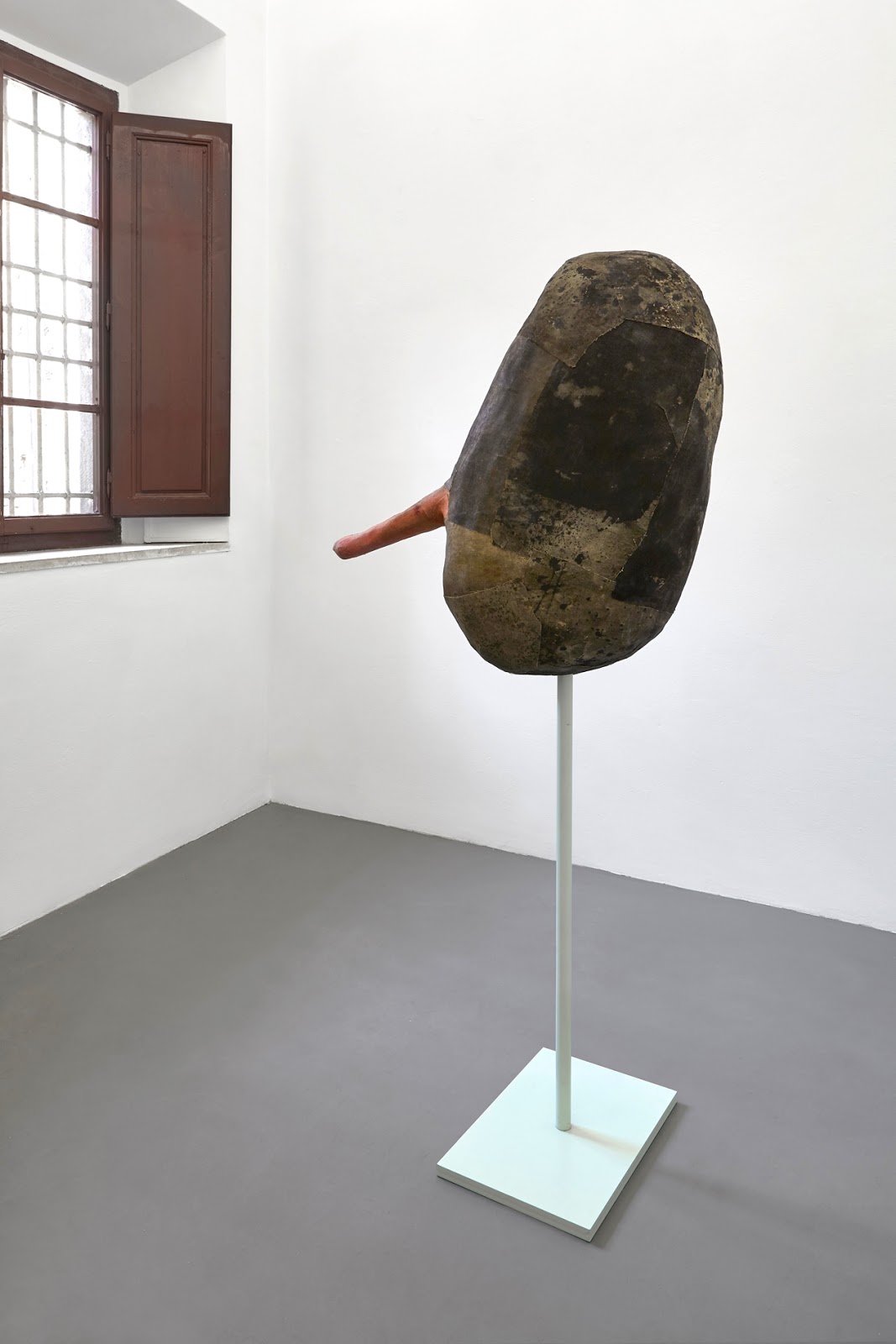 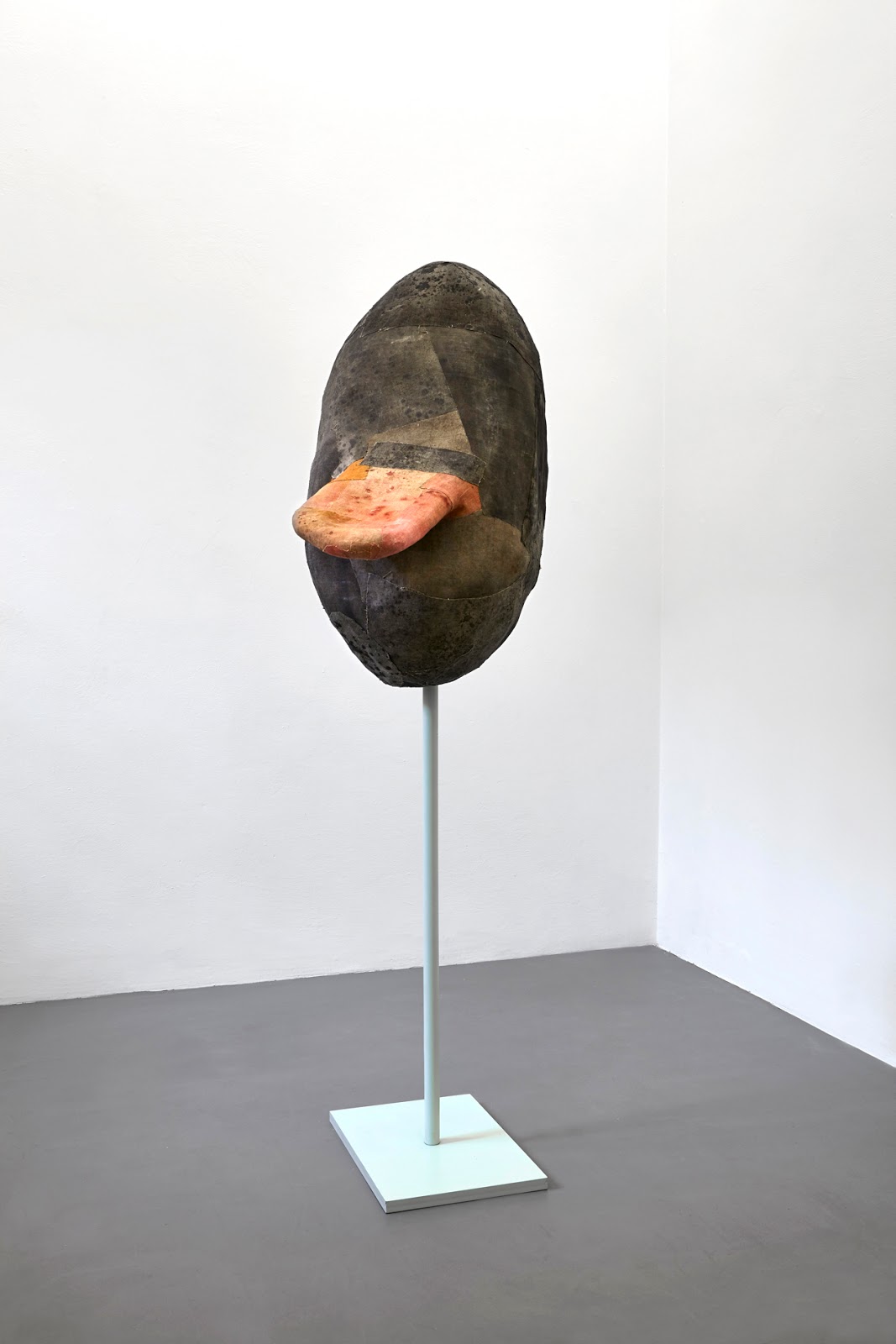 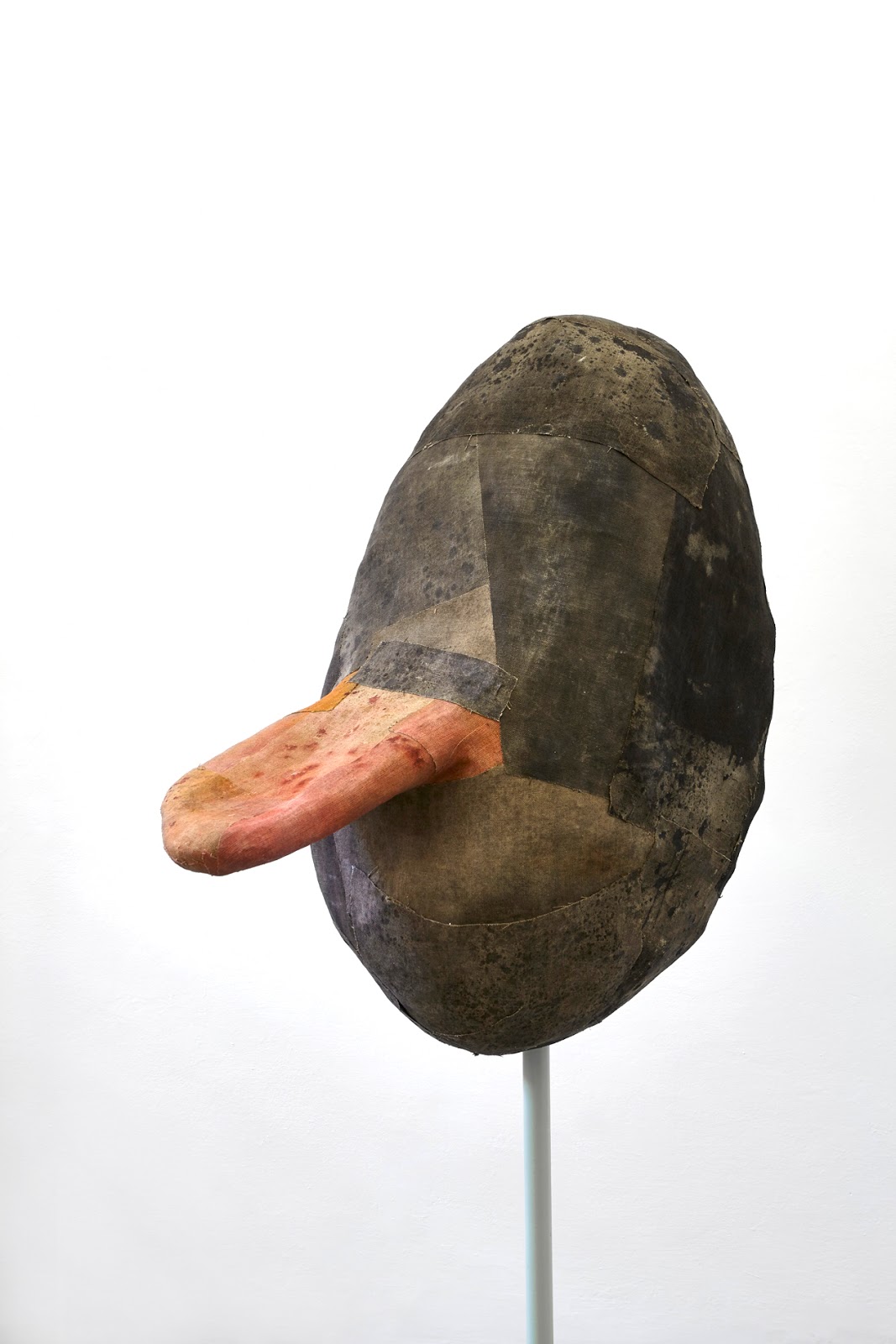 SpazioA is  proud to present on Saturday February 18, 2017, 6pm, at the gallery’s project space, Langue Pendue, the first solo show in Italy by the artist Loup Sarion (1987, Toulouse, France).

The artist presents three sculptures inspired by anthropomorphic or everyday forms that are grouped under the title Langue Pendue. This title refers directly to the nickname of Alex in Leos Carax’s movie The Night is Young and echoes a corpus of Sarion’s works attached to the question of epidermis and surface.

Seated on top of poles, the three pieces exert a strange fascination and are all linked by an idea of ​​quenching. One is the derivative of a cup, the other a tap from which falls a drop of water, the third a simplified face that exhibits a tongue (langue)...hanging (pendue). For the artist the dialogue established between several works proves to be important, their plurality is inherent in their understanding. “We first discover an object that we recognize in the next one and this is how the conversation begins”. By evoking this word conversation and returning to the title chosen for the show, the organ of the tongue seems to be a point of analysis relevant to the work of Loup Sarion. Part of our anatomy particularly vascularized, the tongue serves just as much to chew, swallow, speak, taste, than to kiss. It allows feeding in a Rabelaisian sense, helps animals like humans to lap or lick, leads to enjoyment. The tongue is thus both very vulgar and totally refined, equating itself with the control of the mind or language, even the knowledge of another nation when one speaks “a foreign tongue”.

Through the fabric that is wrapping his matrices, Loup Sarion focuses on epidermis in a work that has always established an ambiguous relationship with painting. For some time he’s been printing and silkscreening, first on curtains, then glass, plexiglass or plaster, the pigments  aspirated by the materials, absorbed by capillarity or evaporated in puddles embodied in the pictorial tradition. Different mediums are thereby married, with previously drawn shapes, which invoke Philip Guston, then carved, as a tribute to Constantin Brâncuşi, before the canvas is dyed, so painted. Sarion assumes his appetite for complexion, saying “all that is human is pleasing to me”, evoking what can refer to the gesture of a reddening of flesh or a dry mouth needing to be moistened.

Loup Sarion works like a craftsman when seen in his studio. He irons his fabrics, then superimposes them and reconstitutes them in collages, as a reference to ​​patchwork, covering, or packaging. He “dresses” his sculpture, and thinks of the unmasked skin, the one that attracts or repulses, the one that provokes the true desire.
Rocked by Leos Carax’s movie, in which Alex, a ventriloquist is so-called Langue Pendue (glib tongue), paradoxically as he does not open it. The 25 years-old character is in the midst of a frustrated and overflowing energy and sensuality, with the feeling of something too narrow badly camouflaging a bubbling fire. Like Loup Sarion, who has the elegance of treating surfaces to allow us, in a second reading, to see what appeals to the reality of things and beings, even when it is a little disgusting.