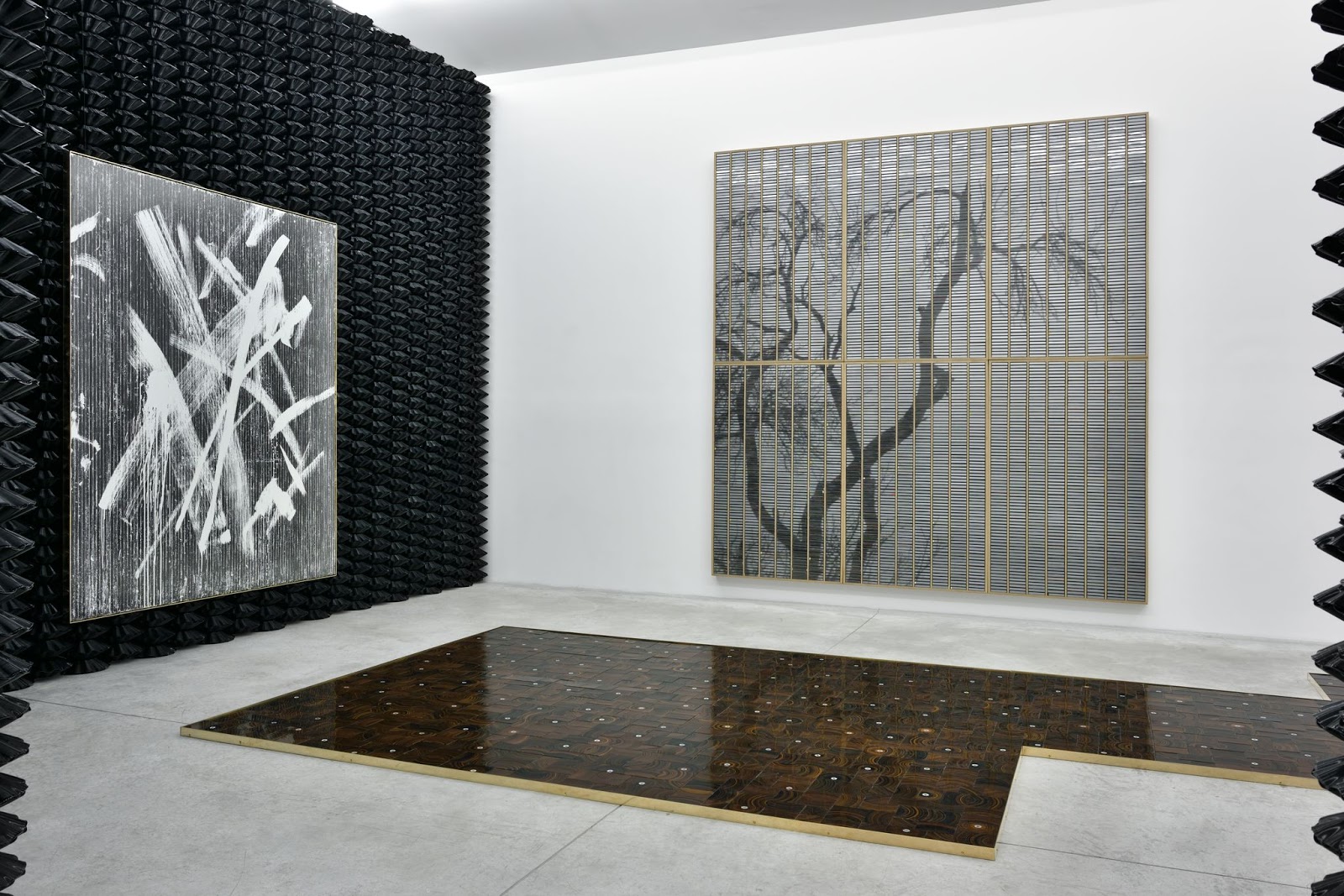 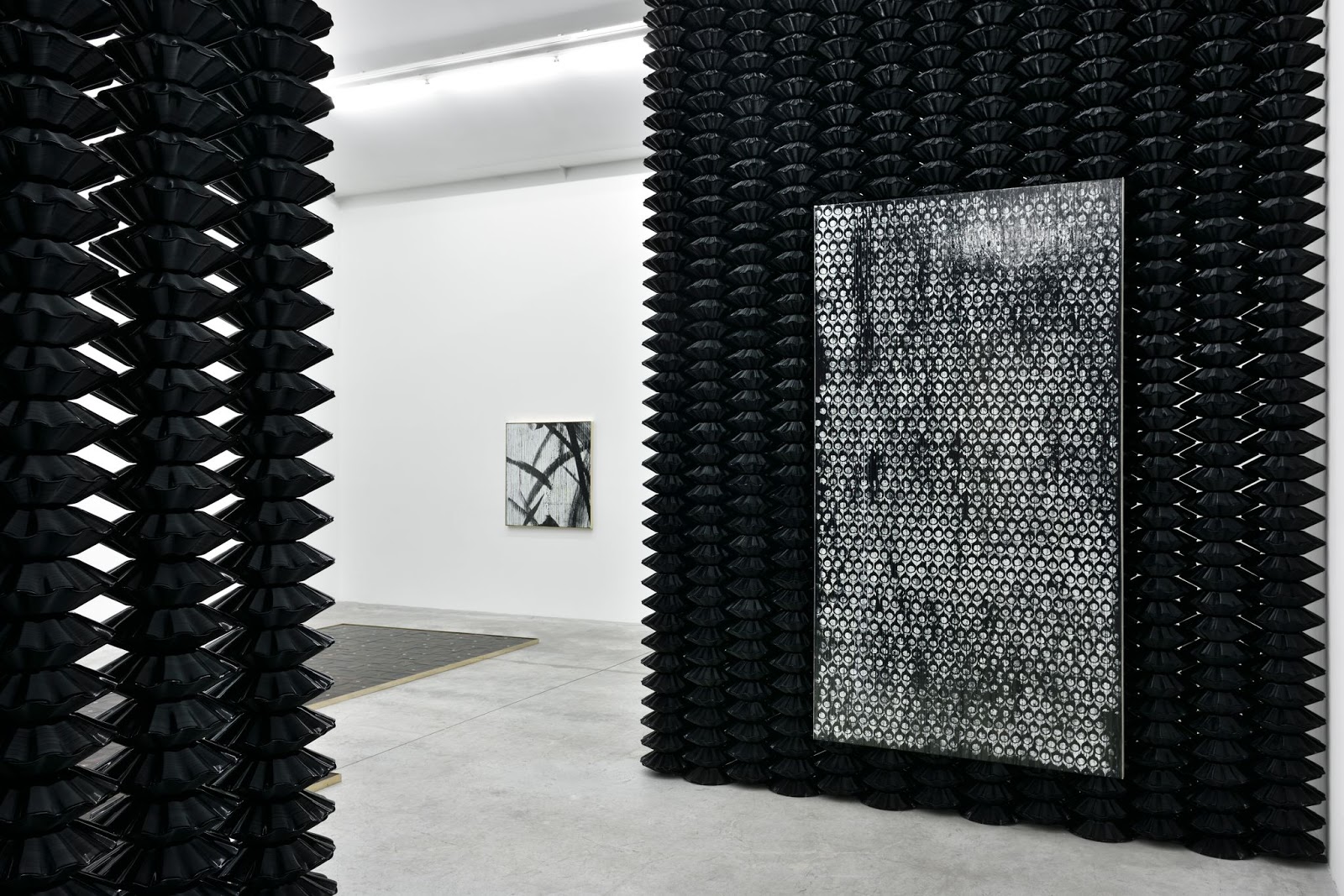 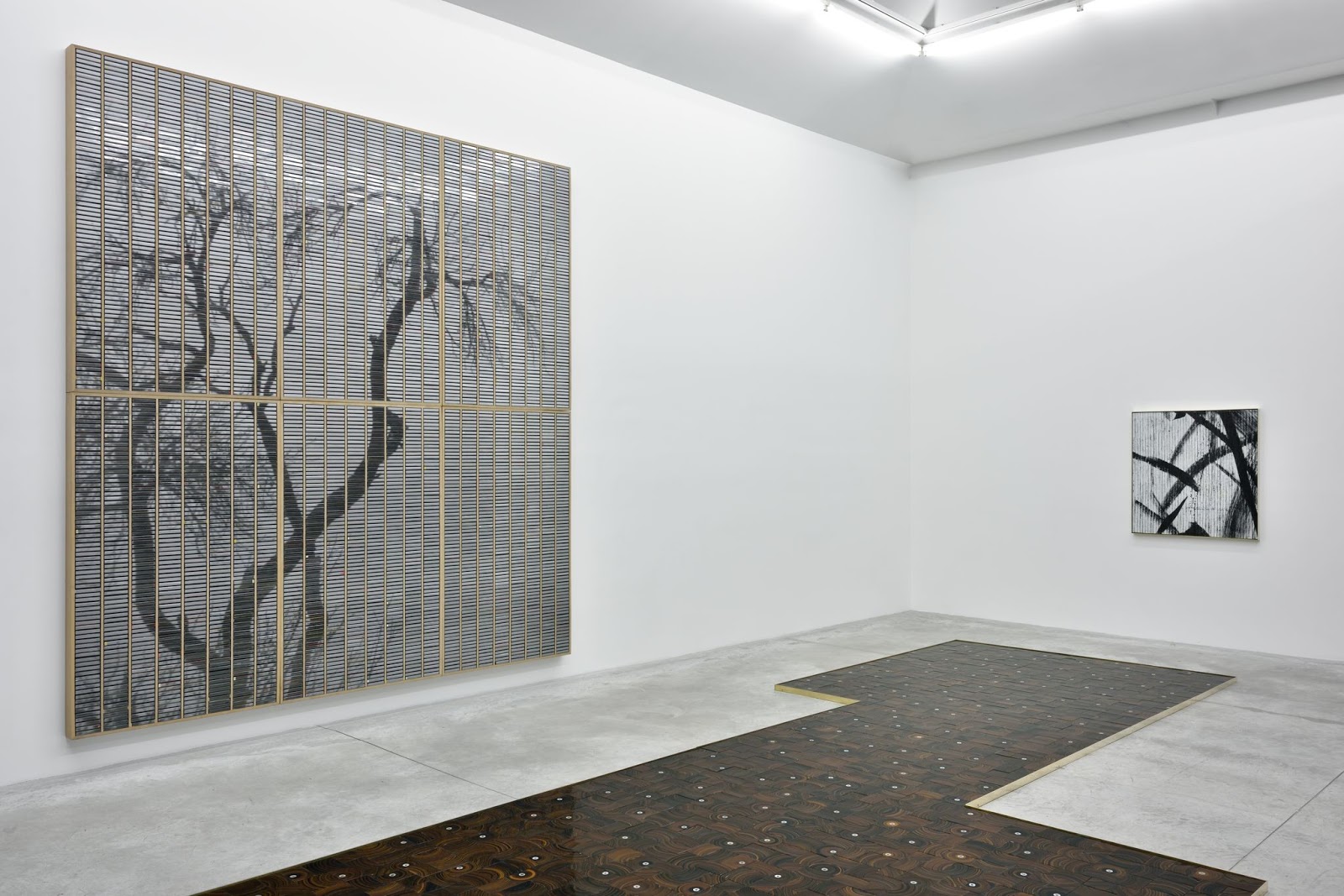 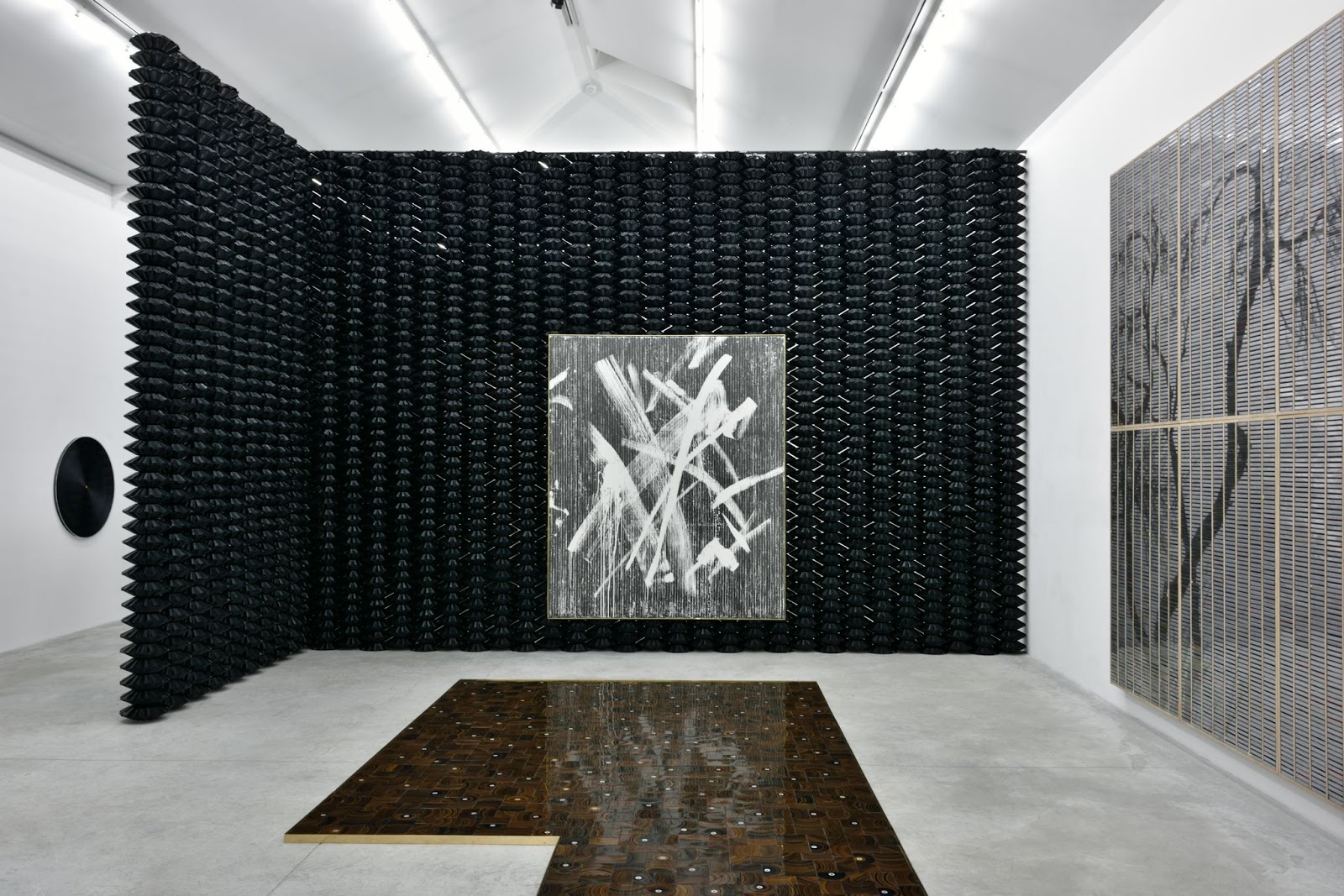 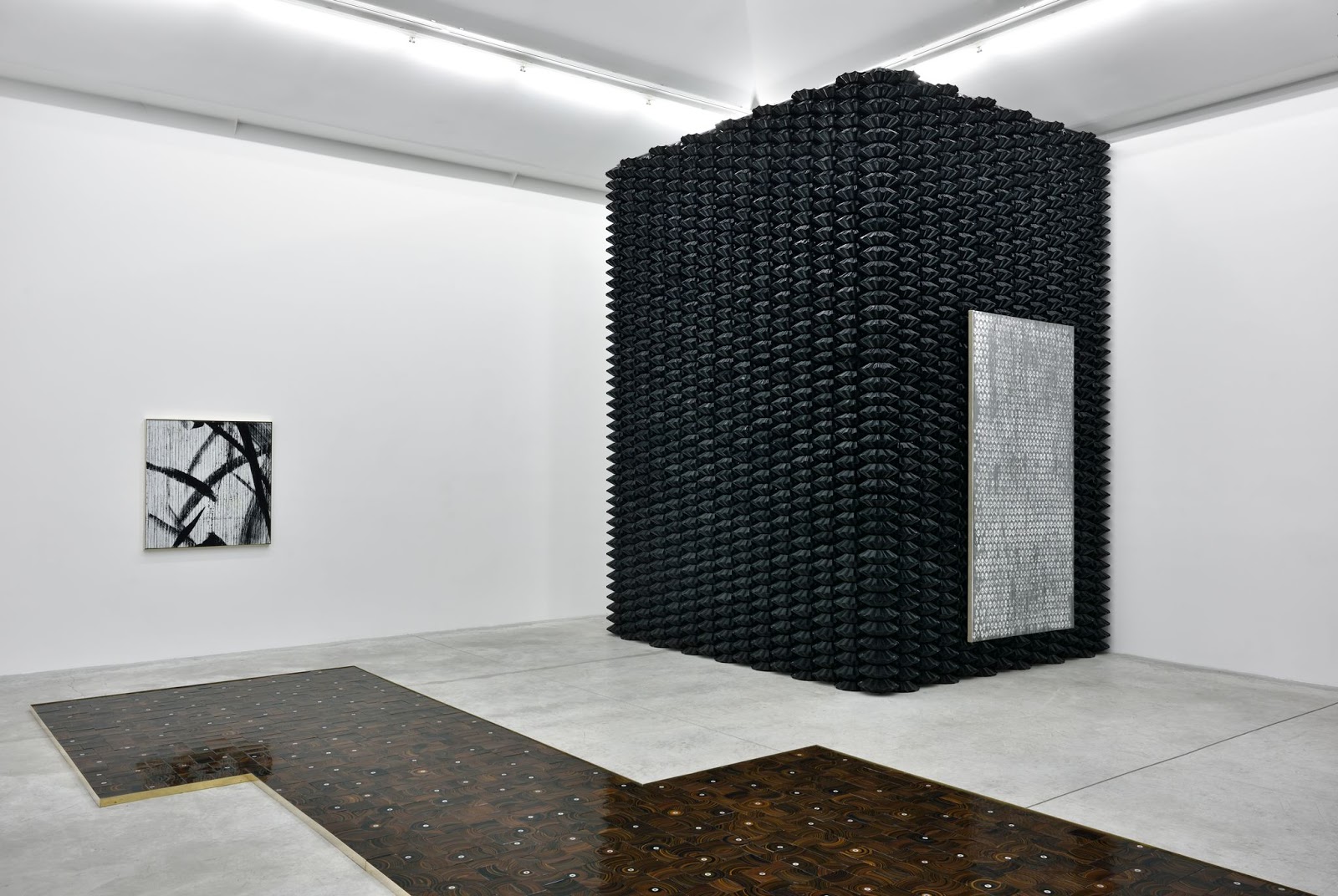 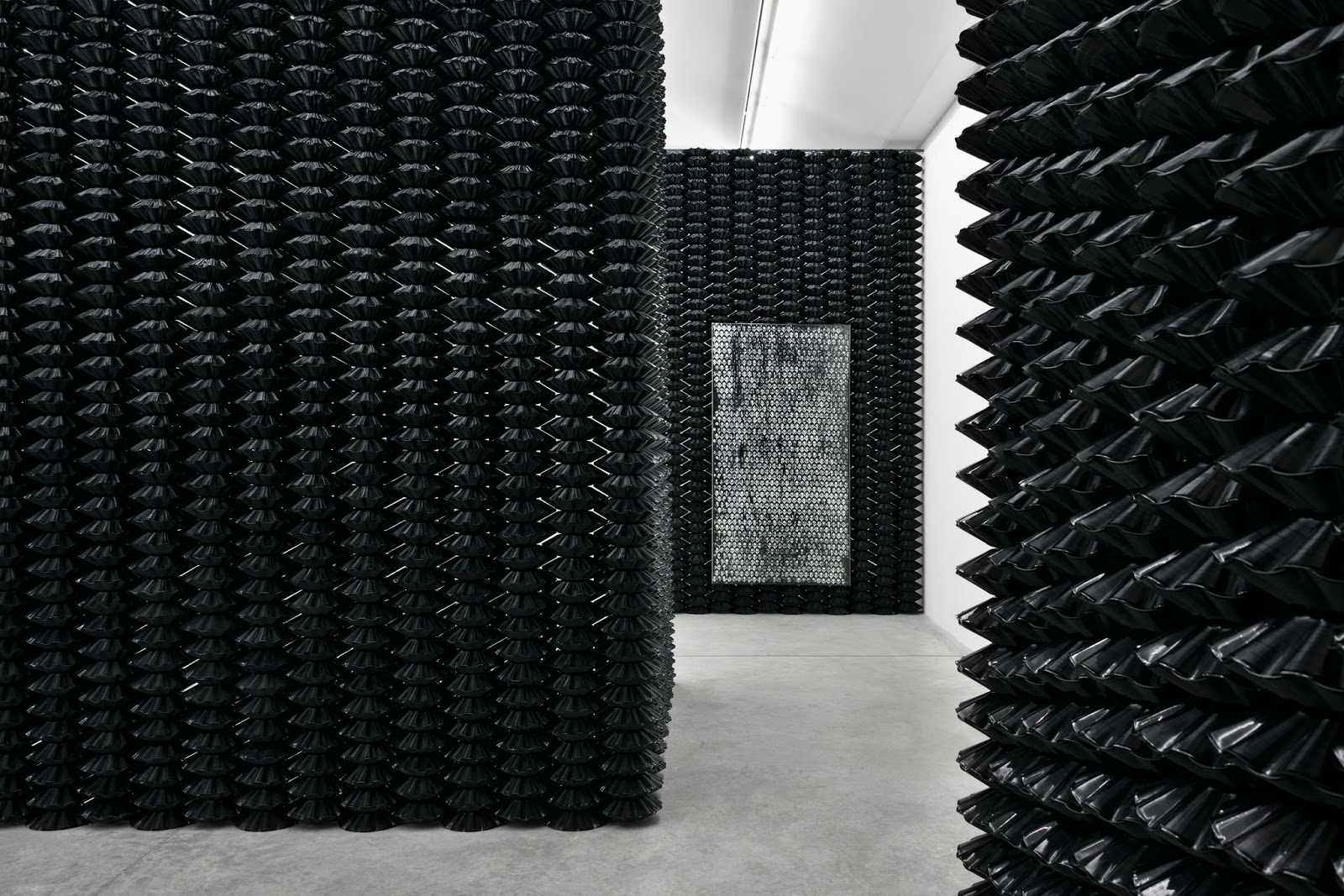 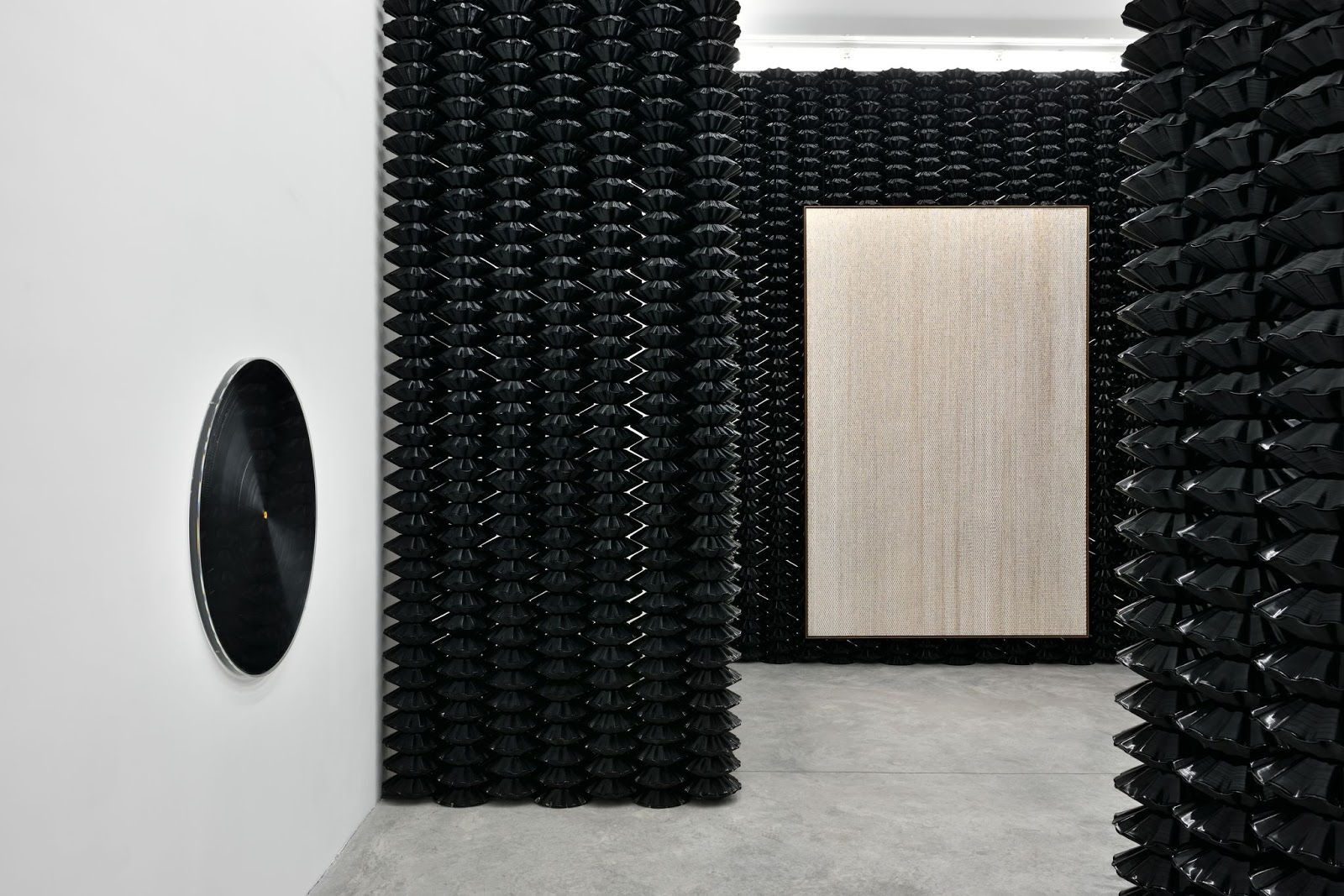 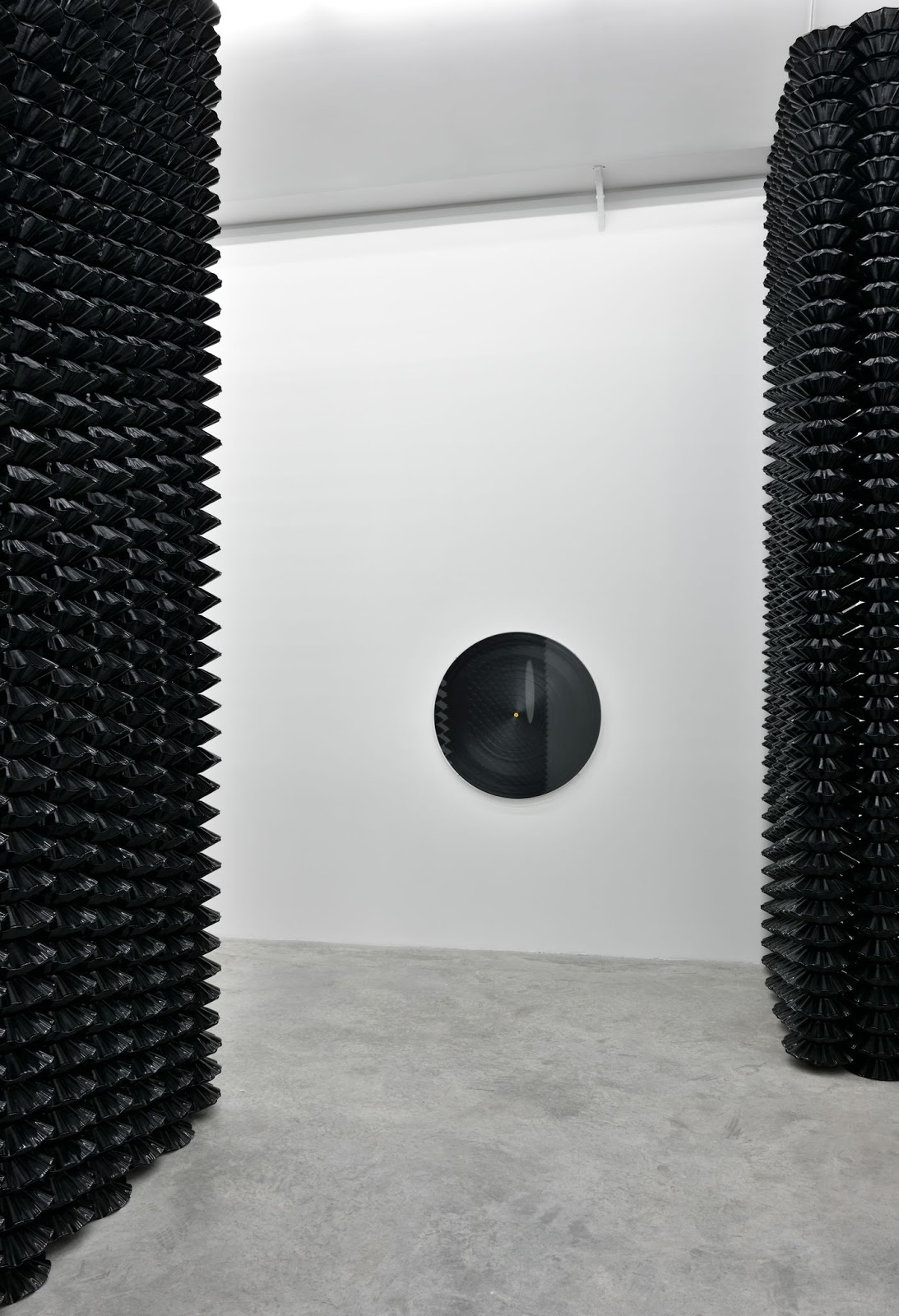 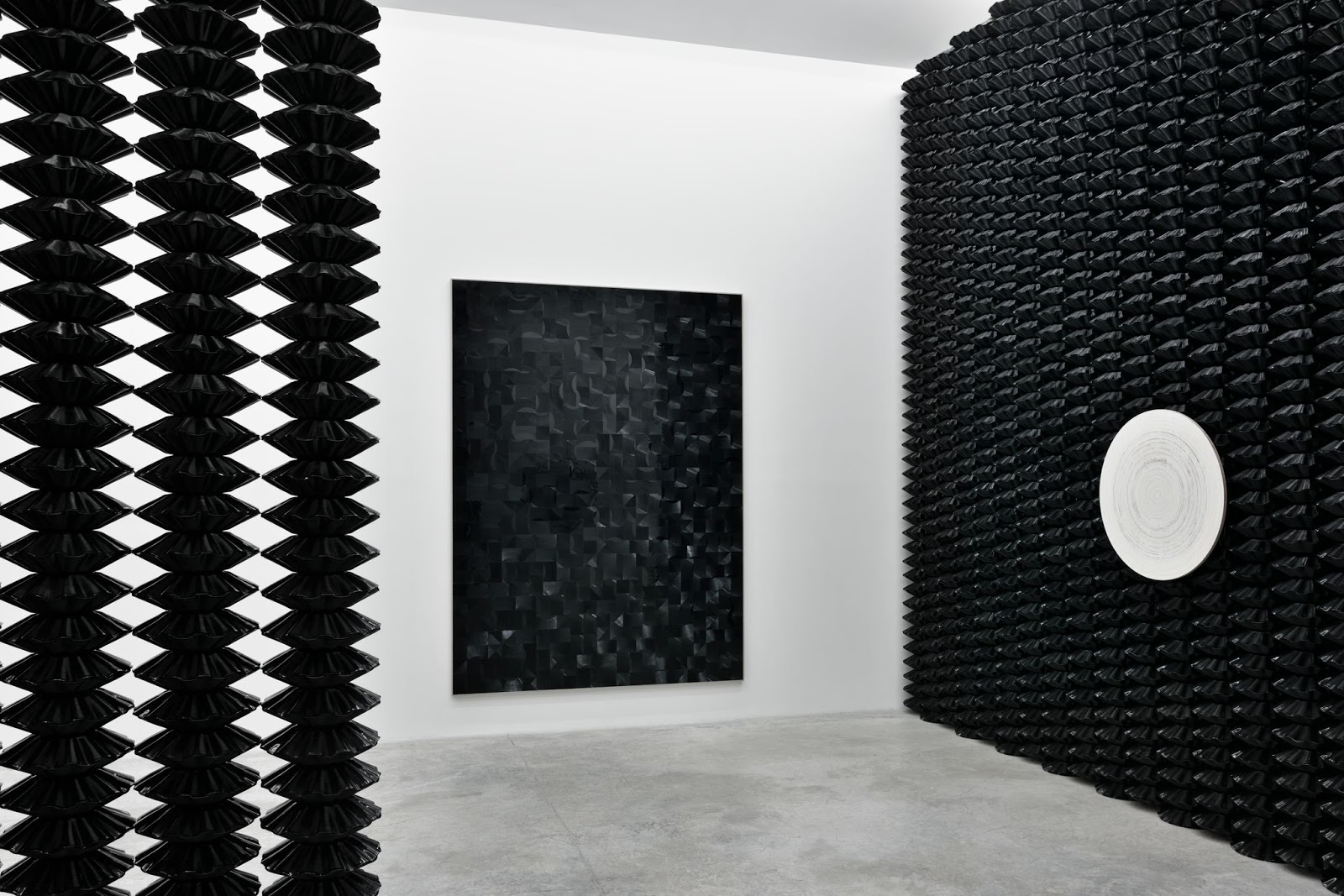 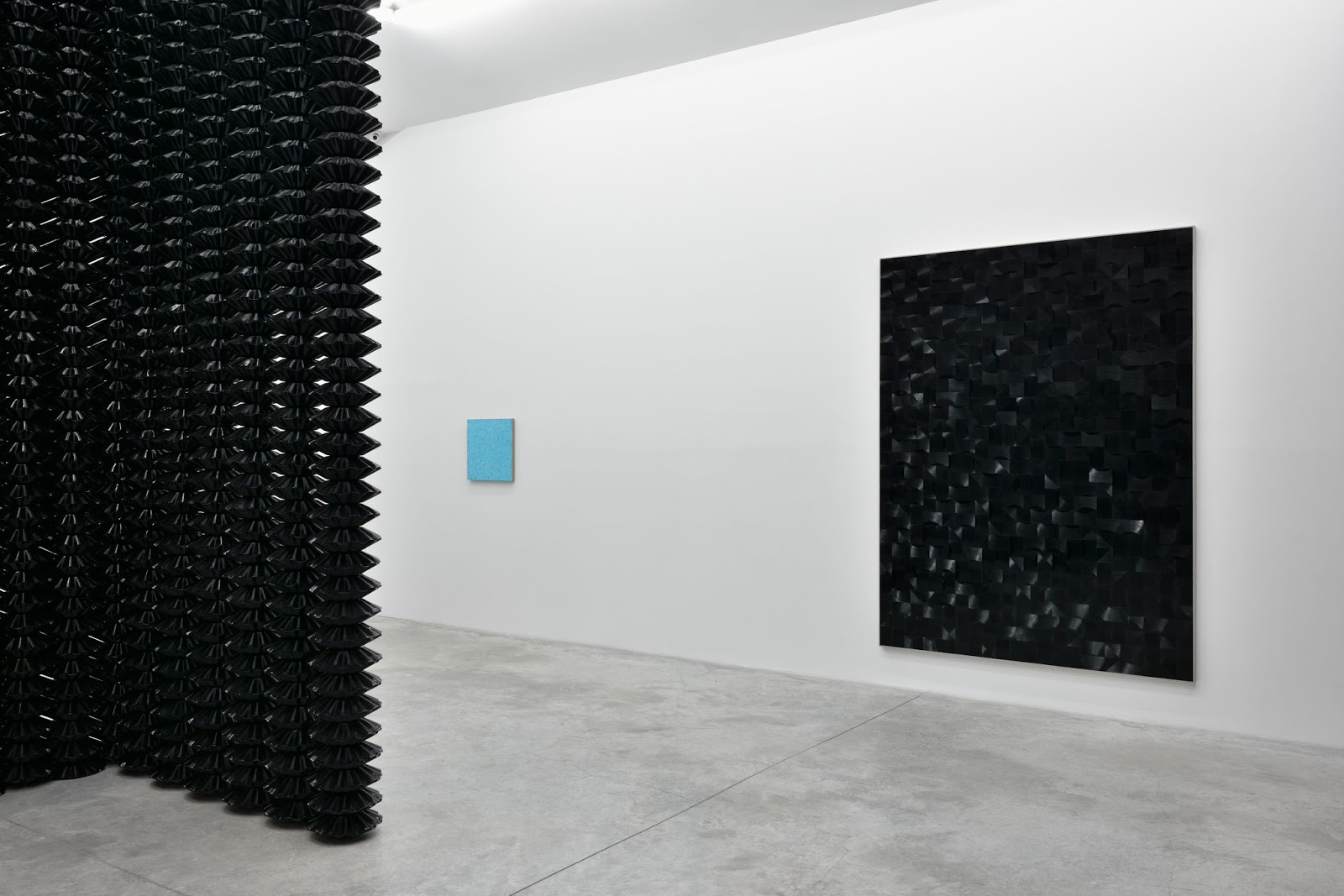 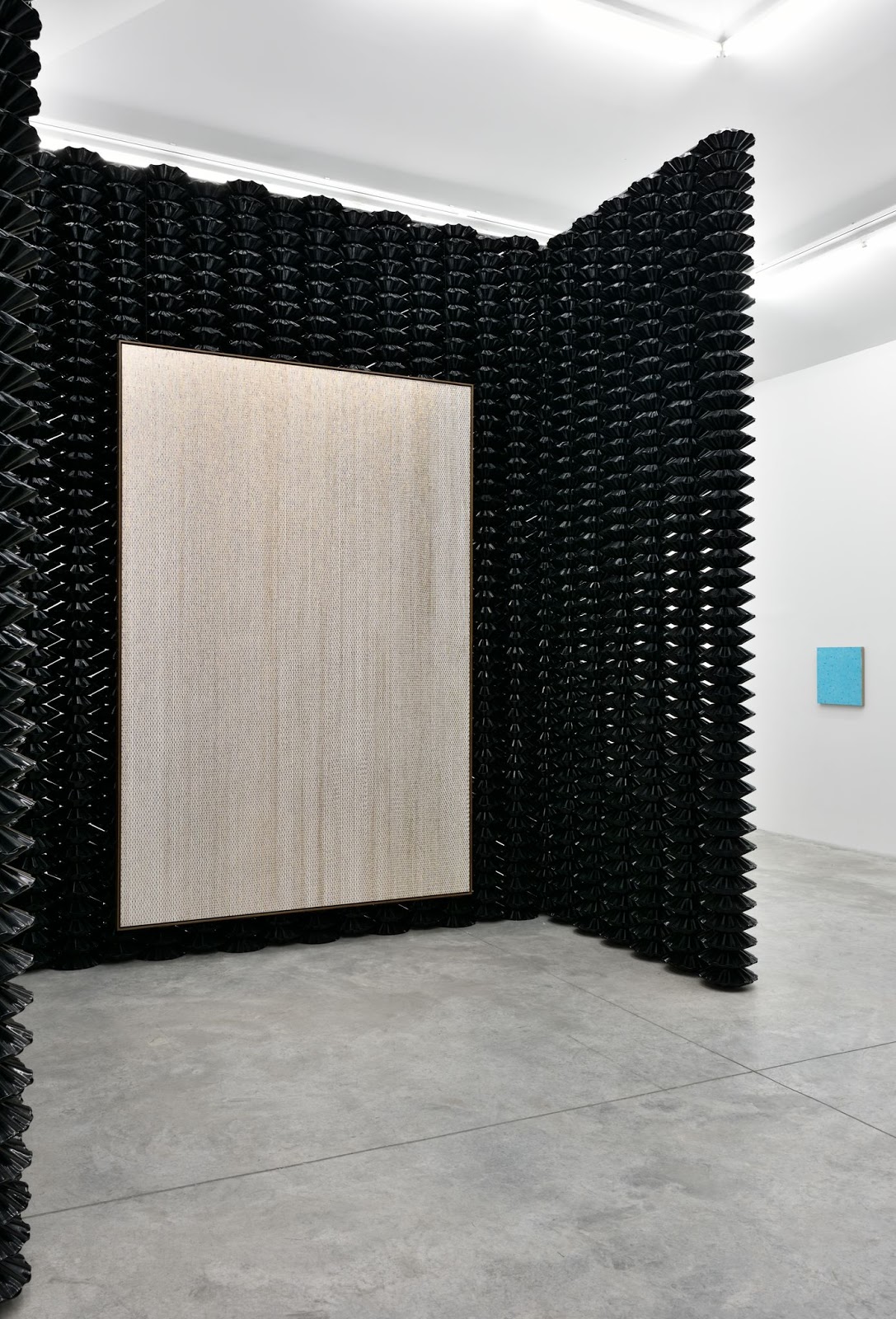 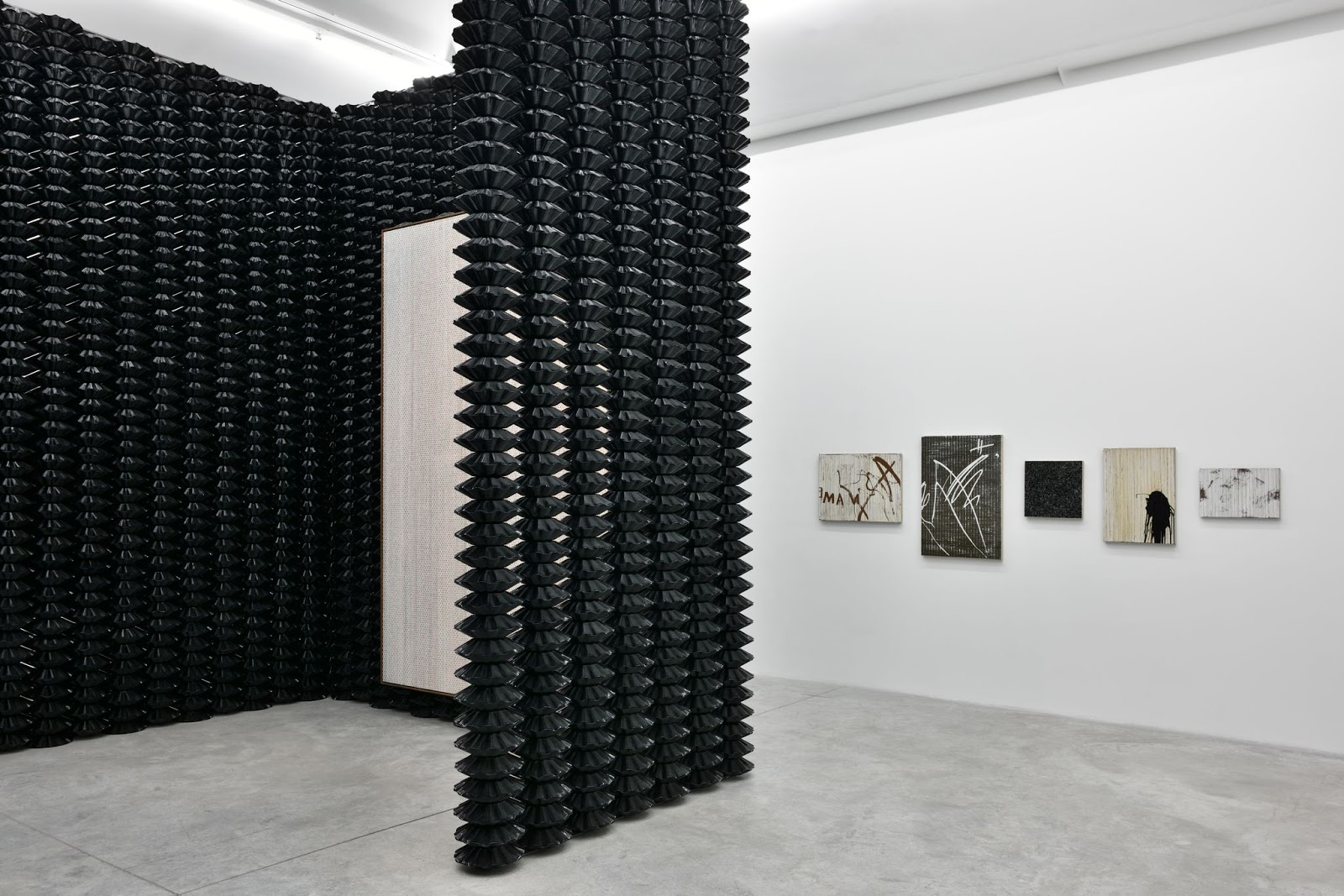 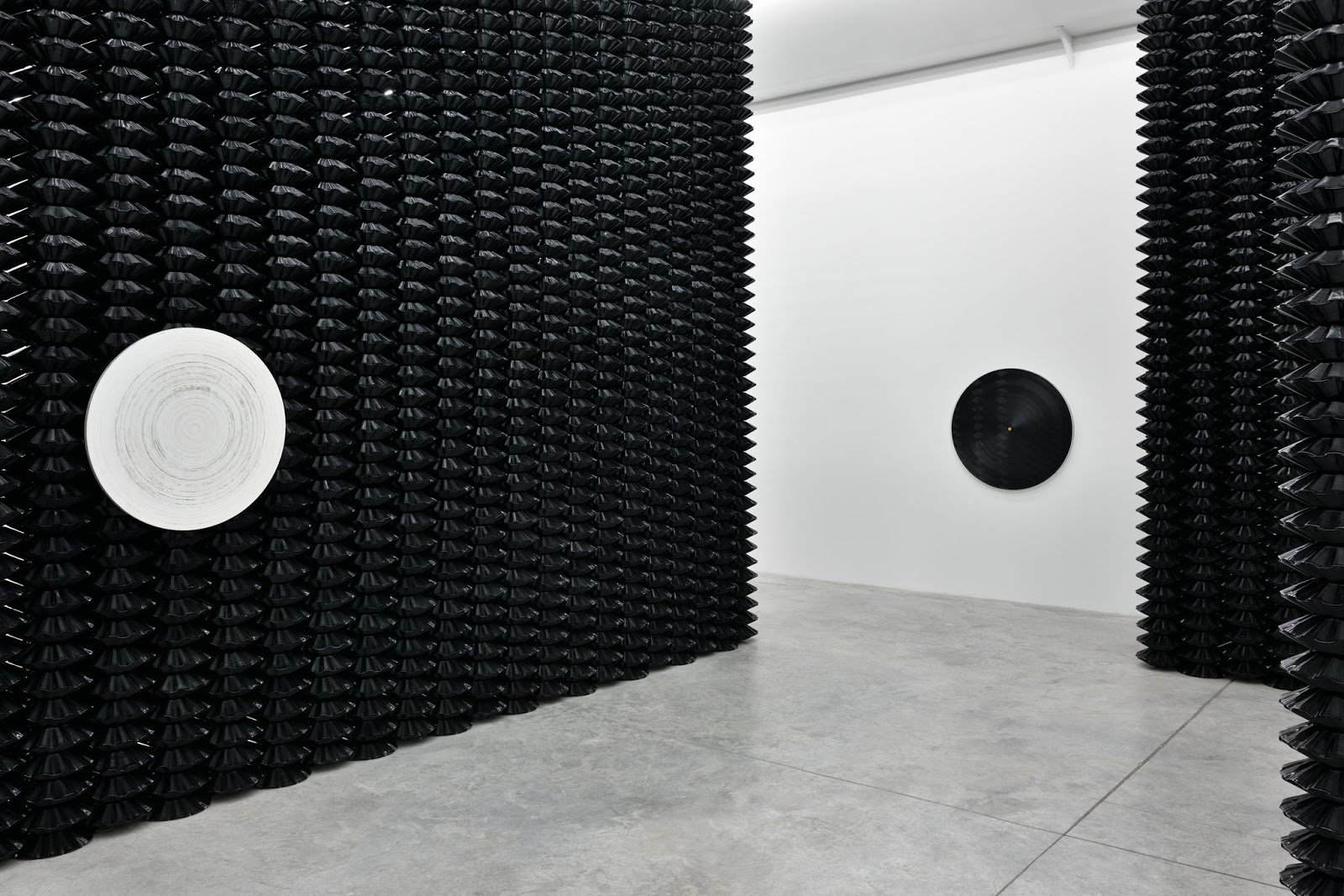 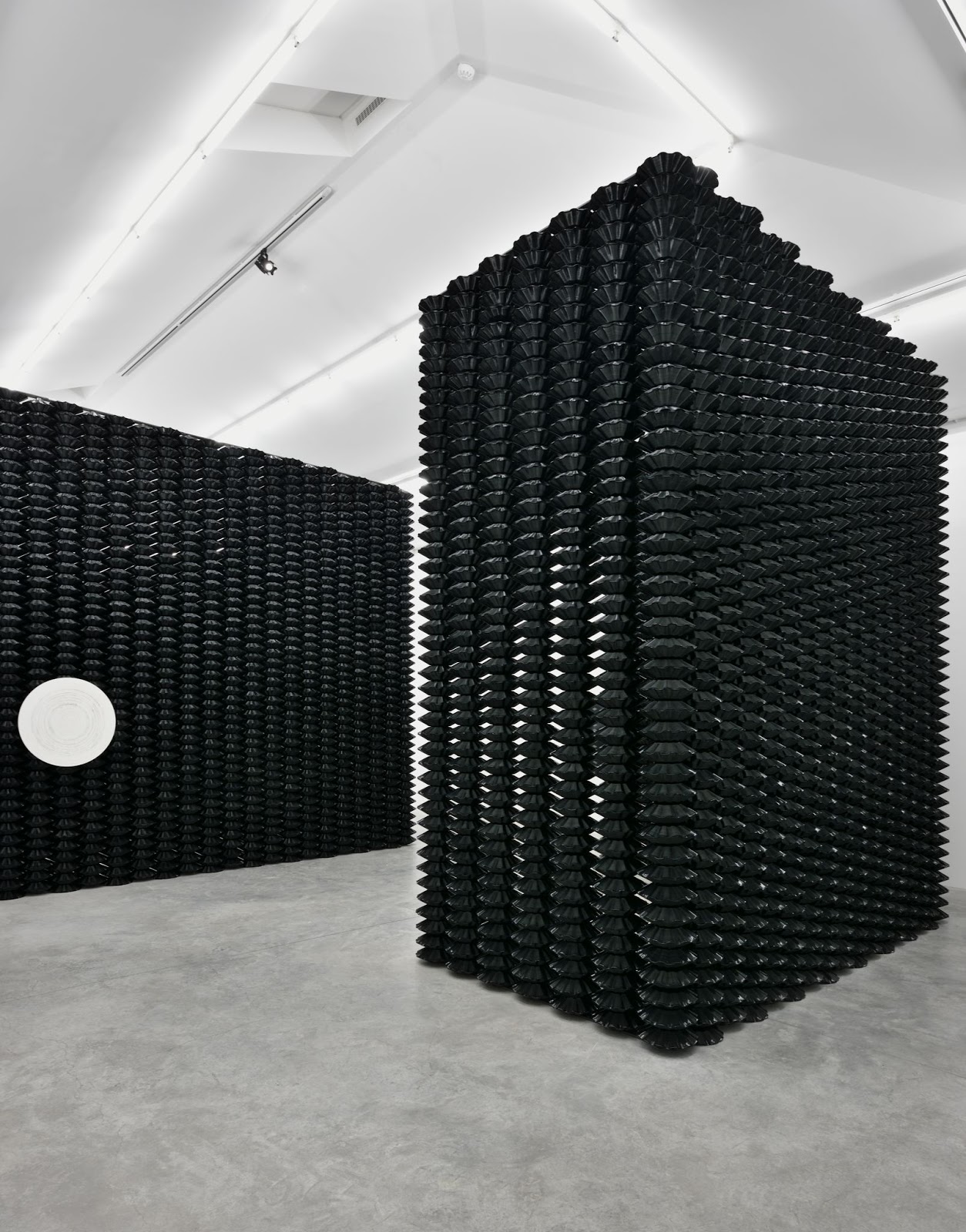 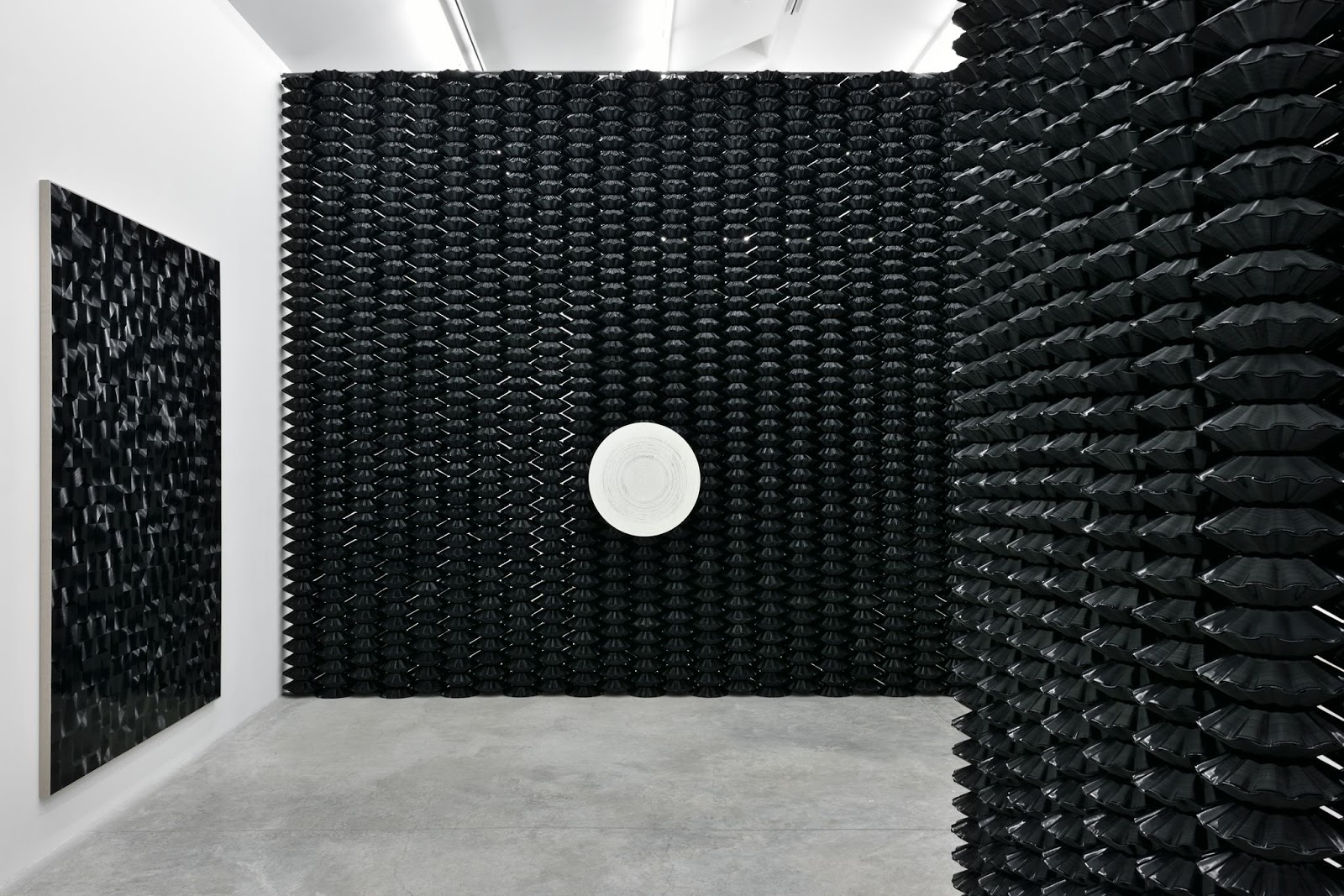 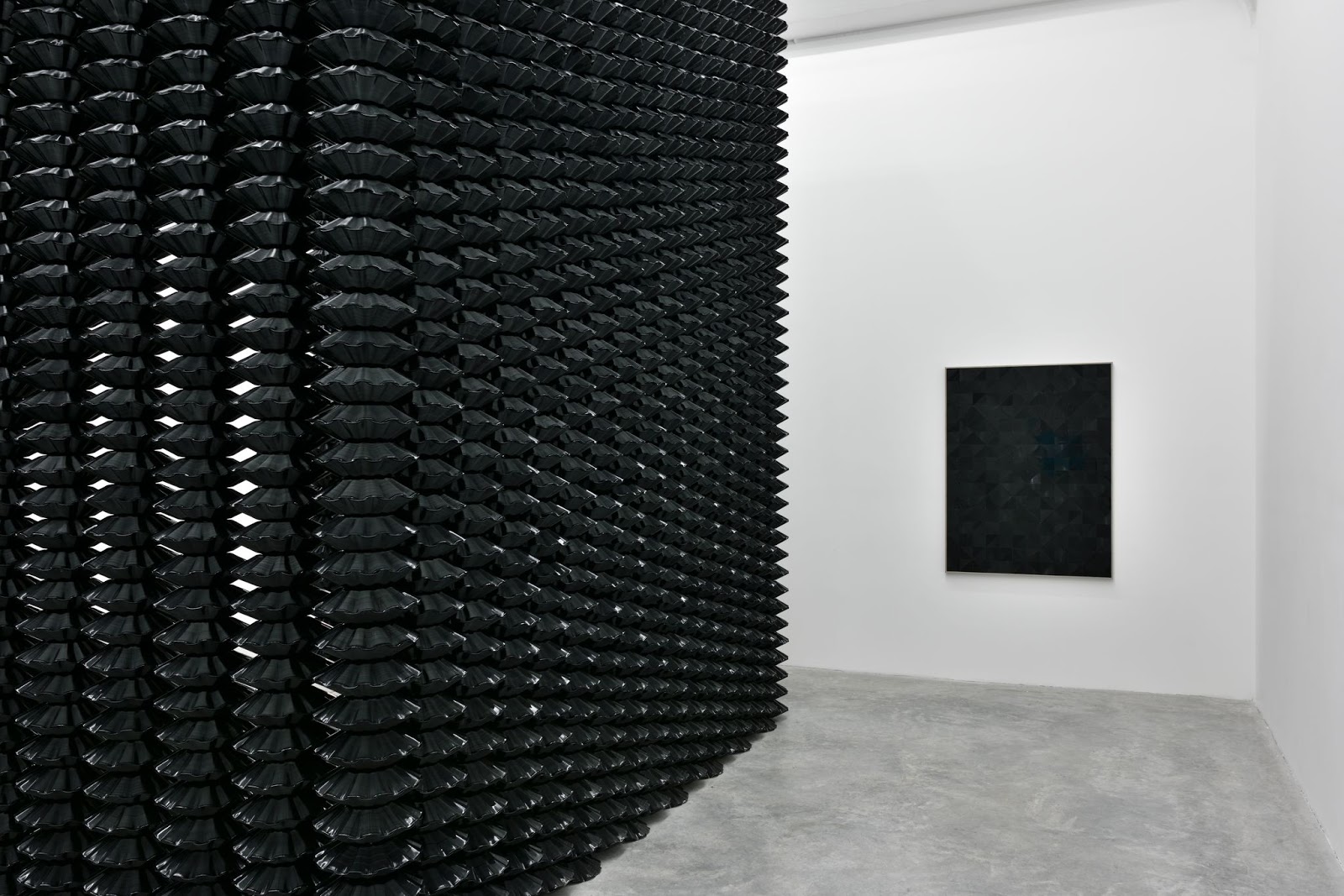 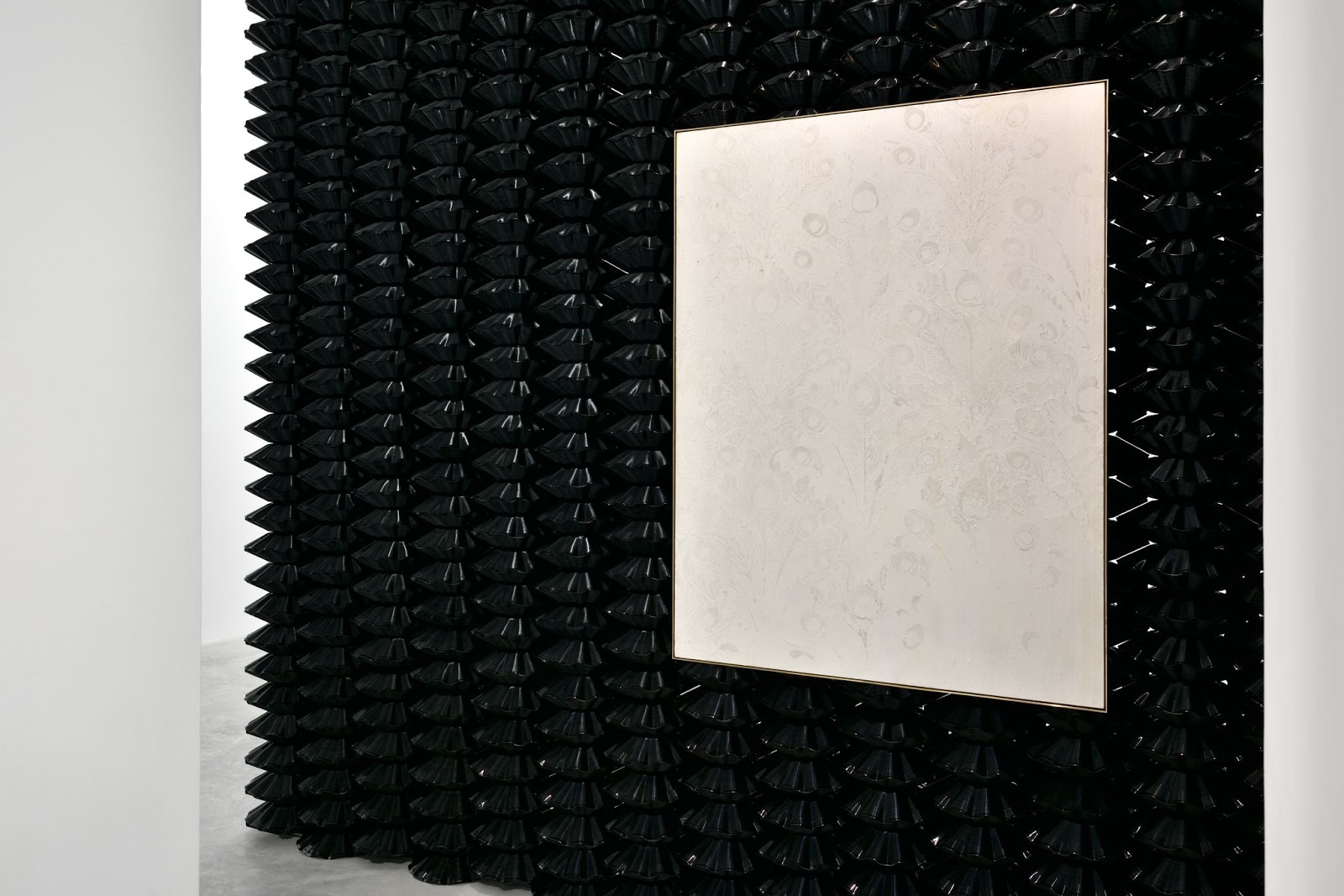 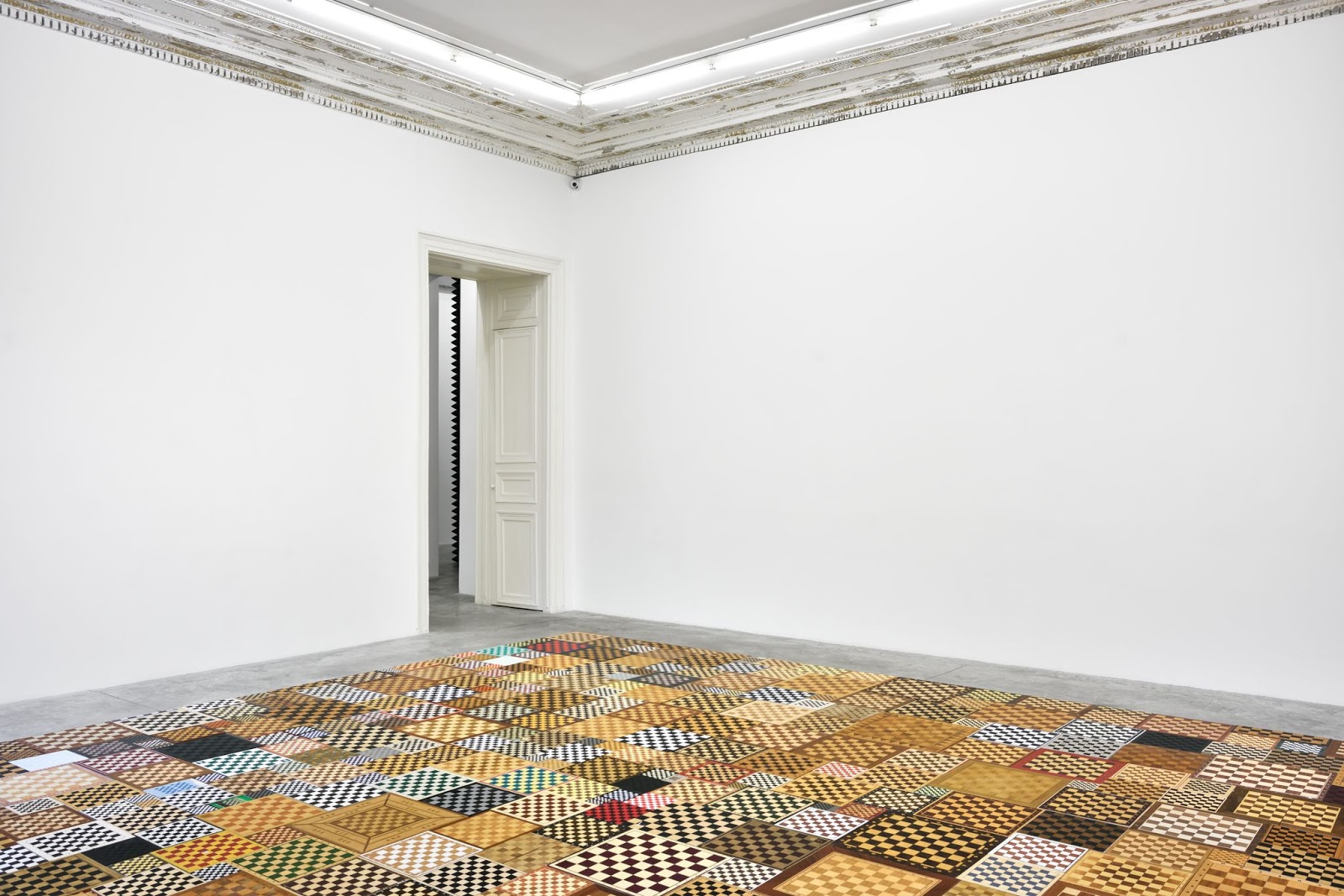 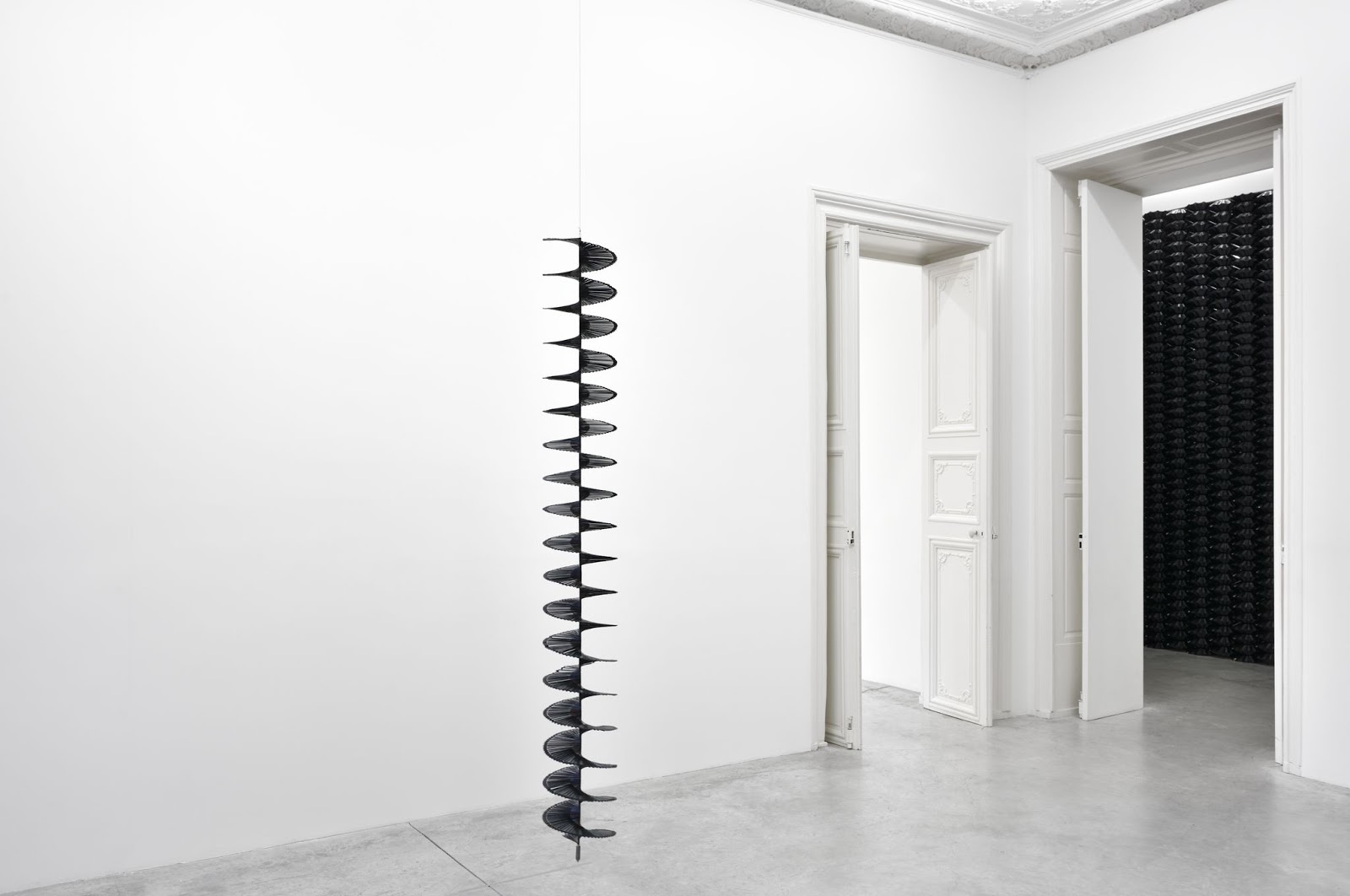 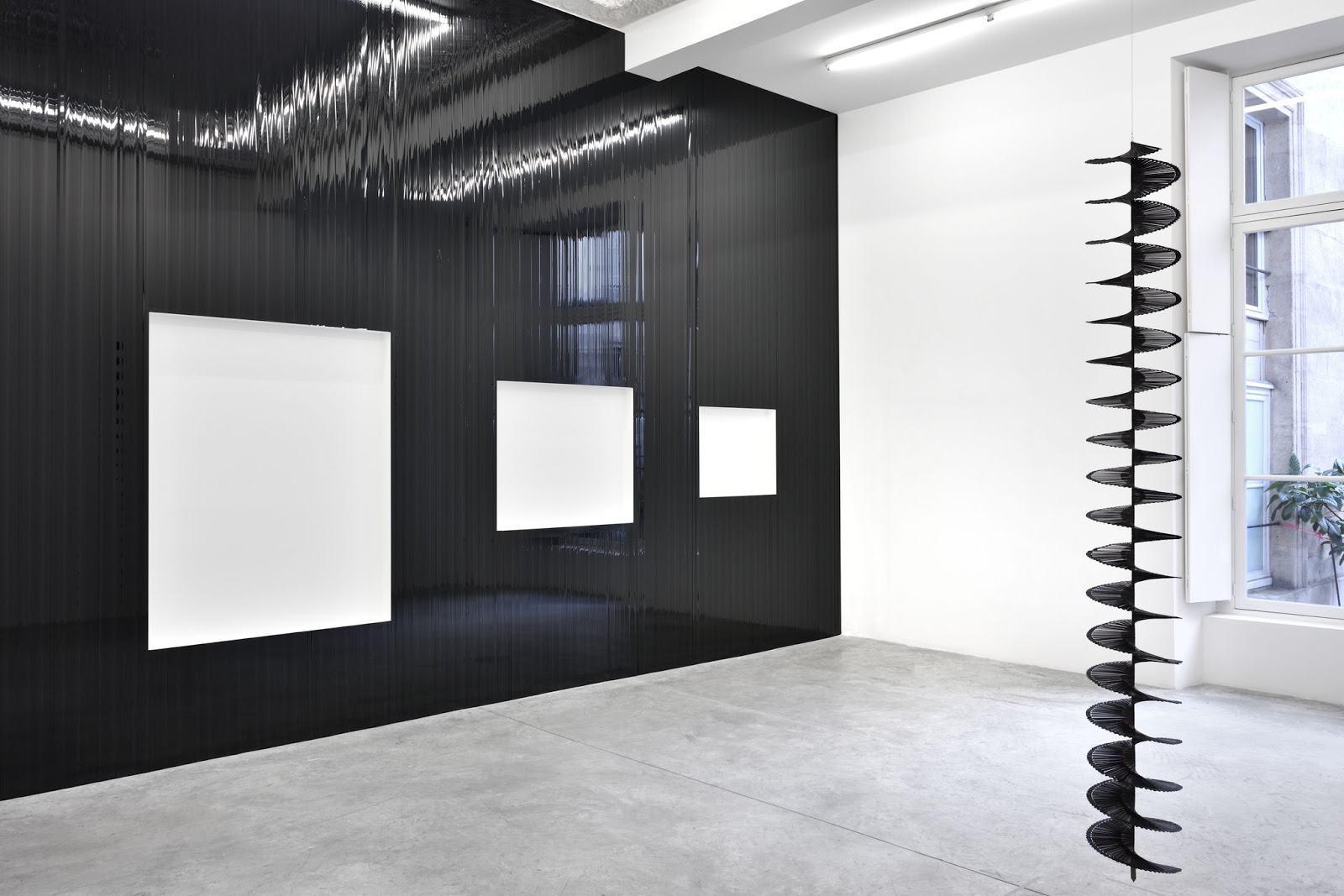 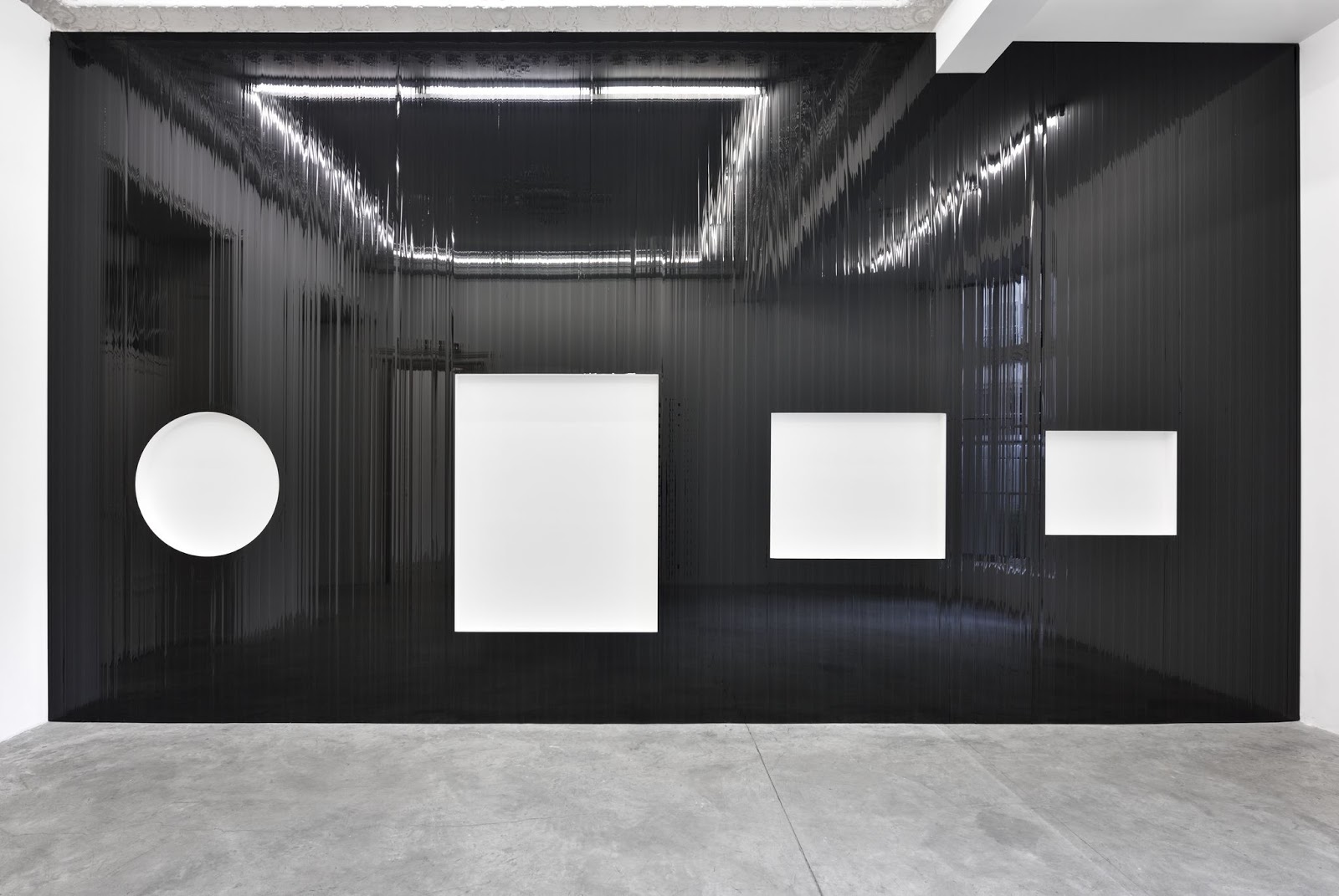 The expression tous les coups sont permis (“no holds barred”) is as true of Gregor Hildebrandt’s Berlin studio as that other old adage about everything in love and war. The ancient war game of chess neatly makes the point that there are always rules demarcating a field of endless possibilities, rules that provide the necessary basis for all subsequent progress and development. Just as it does in life, the next step in a game of chess will always follow on from its precursor. And until the game ends, its outcome remains uncertain. Gregor Hildebrandt has transposed this principle into his solo exhibition ‘Tous les coups sont permis’. On entering this labyrinthine arrangement of opaque sound barriers (Schallmauern, 2013) and diaphanous columnar screens of vinyl records (Schallplatten Säulenwand, 2010), the viewer leaves familiar structures behind and moves step by step through a many-layered world that has evolved with Hildebrandt over the years on the basis of audiovisual mediums such as cassettes, videotapes, and records. The titular work Tous les coups sont permis (2016) refers to the ornamental wall covering of the captain’s room at the historic Jane Hotel in New York, where surviving passengers of the Titanic were temporarily housed. Here the artist has created a peacock feather pattern in fine dust and dirt on a seemingly transparent, off white monochrome surface. With this image he evokes a ghostly, spectral atmosphere recalling times long since passed. The path leads to the monumental floor piece Hirnholzparkett (End Grain Parquet, 2015), its visible surface consisting of the thin edges of countless cassette tape ribbons. Hildebrandt has wound them onto spools, cut them into orthogonal pieces and cast them in epoxy resin to be laid as flooring. The otherwise continual flow of these virtually endless tracks—which recall the grooves of a record or the annual rings of a tree—has been interrupted by the working process and turned into labyrinthine concatenations. The site-specific installation of this Hirnholzparkett interfaces with the architectonic structure of the exhibition like a tranquil lily pond in a Japanese garden, where a pond always symbolises the sea and where a crooked path, like a labyrinth, stands for life’s unpredictability and non-linearity. The black video tapes of the wall installation Orphische Schatten (Orphic Shadows, 2013) have all been populated with Jean Cocteau’s Orpheus (1949), a film that features shadows as some of its major motifs. The four empty niches also act as shadows; they suggest absent artworks through the apparent echoing of their mere external forms. The duality of light and darkness is a fundamental motif in Hildebrandt’s work. His Rip-Offs always involve positive and negative images that interlock and belong together like the black and white squares of a chess board. For his Schachbrettboden (Chequered Floor, 2016) Hildebrandt has combined chess boards from a wide range of times and places. Despite their disparate origins they all seem to fit together perfectly and merge into a single entity. Much like the Hirnholzparkett and its apparently endless tracks of tape, in theory this work could also be extended ad infinitum. The all-over structure that these two monumental works have in common seems to be symbolic of some sort of perfect whole, albeit one that is not all there at the moment, which could also be said of the pictures in the white niches of the wall installation. This idea is present in much of Hildebrandt’s work. The vinyl columns are a case in point; another is the monumental work consisting of countless tiny leaves of copper—the parts of an audio cassette whose actual function is to gently raise the piece of felt so that the piece of music or the story on the tape can be played back. Their infinite number and vertical orientation on the surface of the picture has the effect of reflective rain glistening in the yellows, reds, and brownish tones of the copper.The luminescent shades of turquoise and blue in Hildebrandt’s Die immer wiederkehrende Blaue Stunde (The Ever-Recurring Blue Hour, 2016) refer to the title of Gottfried Benn’s melancholic love poem ‘Blaue Stunde’. The coloured leaders on an audio cassette tape differ from the dark tape itself in that they are neither coated nor populated, but entirely blank. They are located where one side ends and the other begins. In this sense they symbolise a continuous and theoretically endless loop. Hildebrandt has his eye on the bigger picture here too. His works often symbolise the potentially conceivable possibilities of the given field; there are no holds barred. At the same time they combine antitheses such as light and dark, black and white, presence and absence. For just as it is impossible to play chess on a board of black squares, so it is the combination of opposing elements which belong together that makes development and progress possible in the first place.
Text by Tina Sauerländer