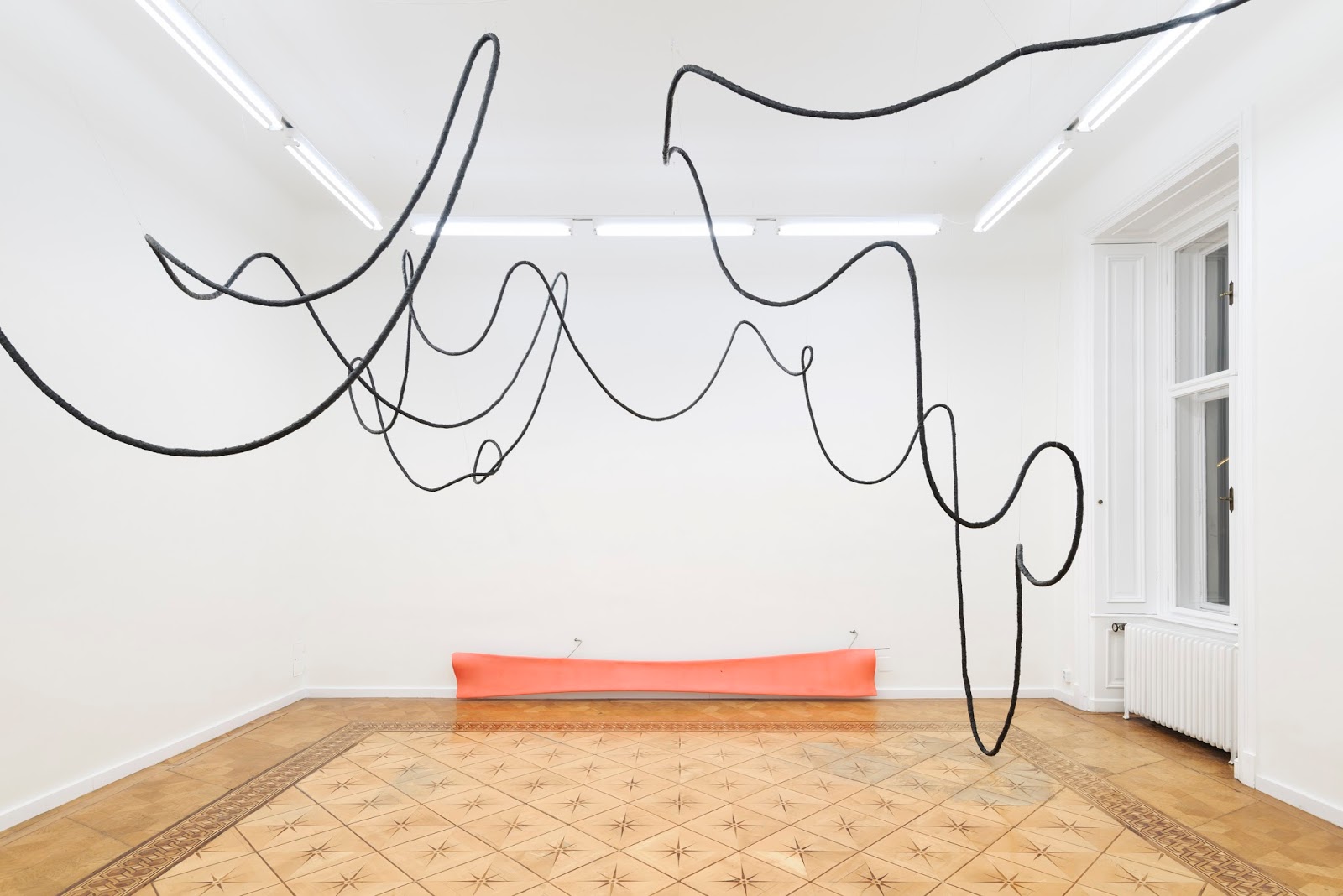 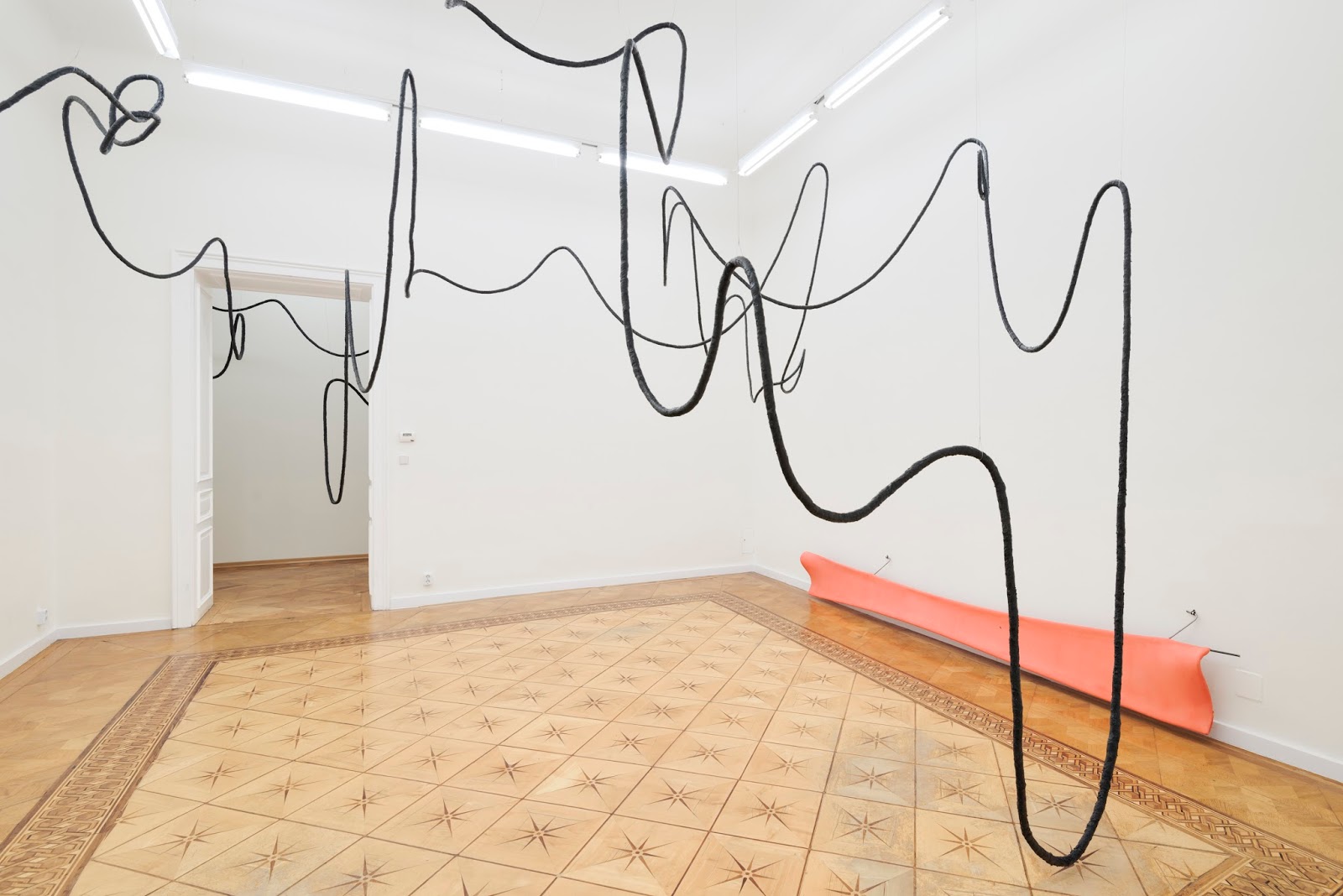 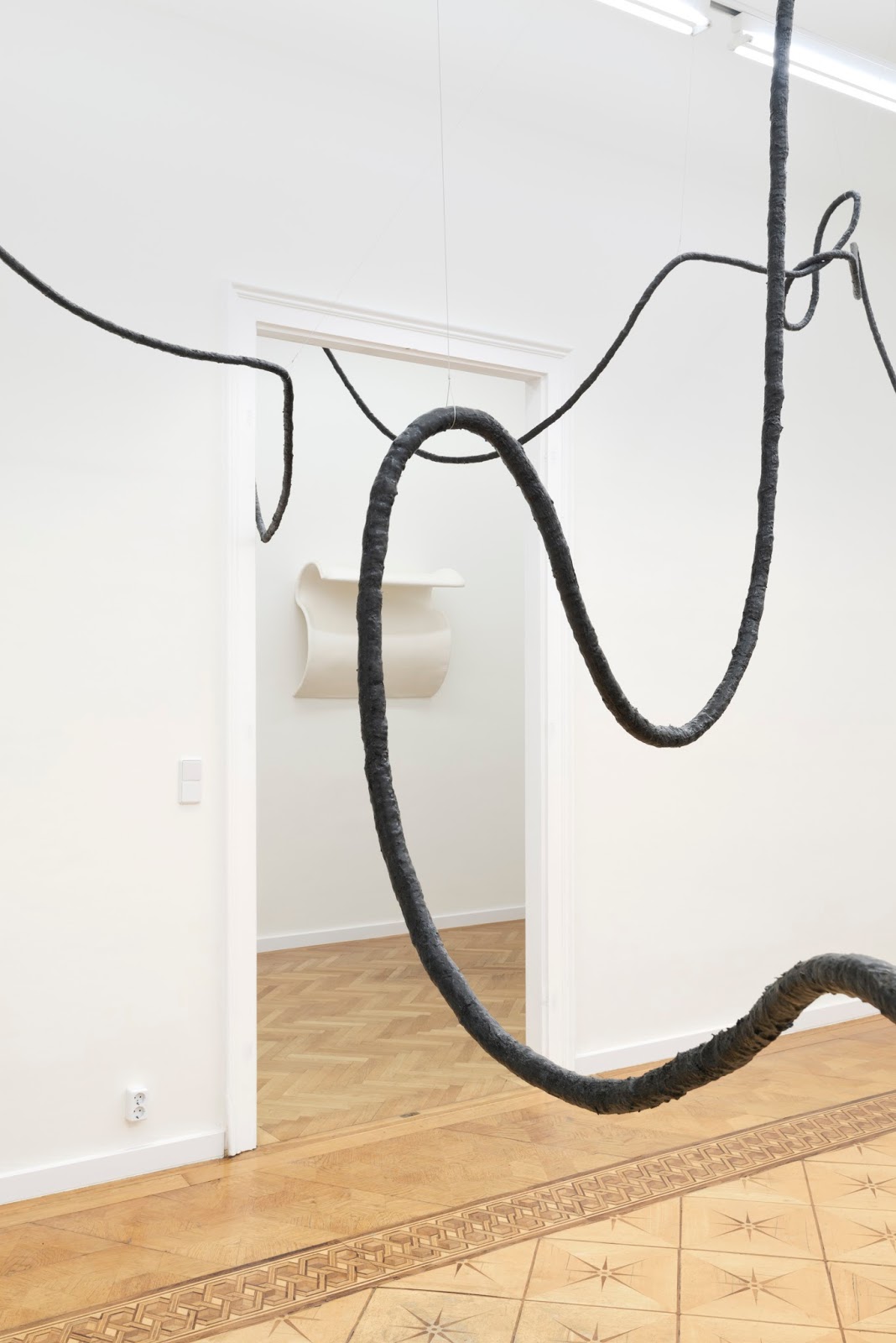 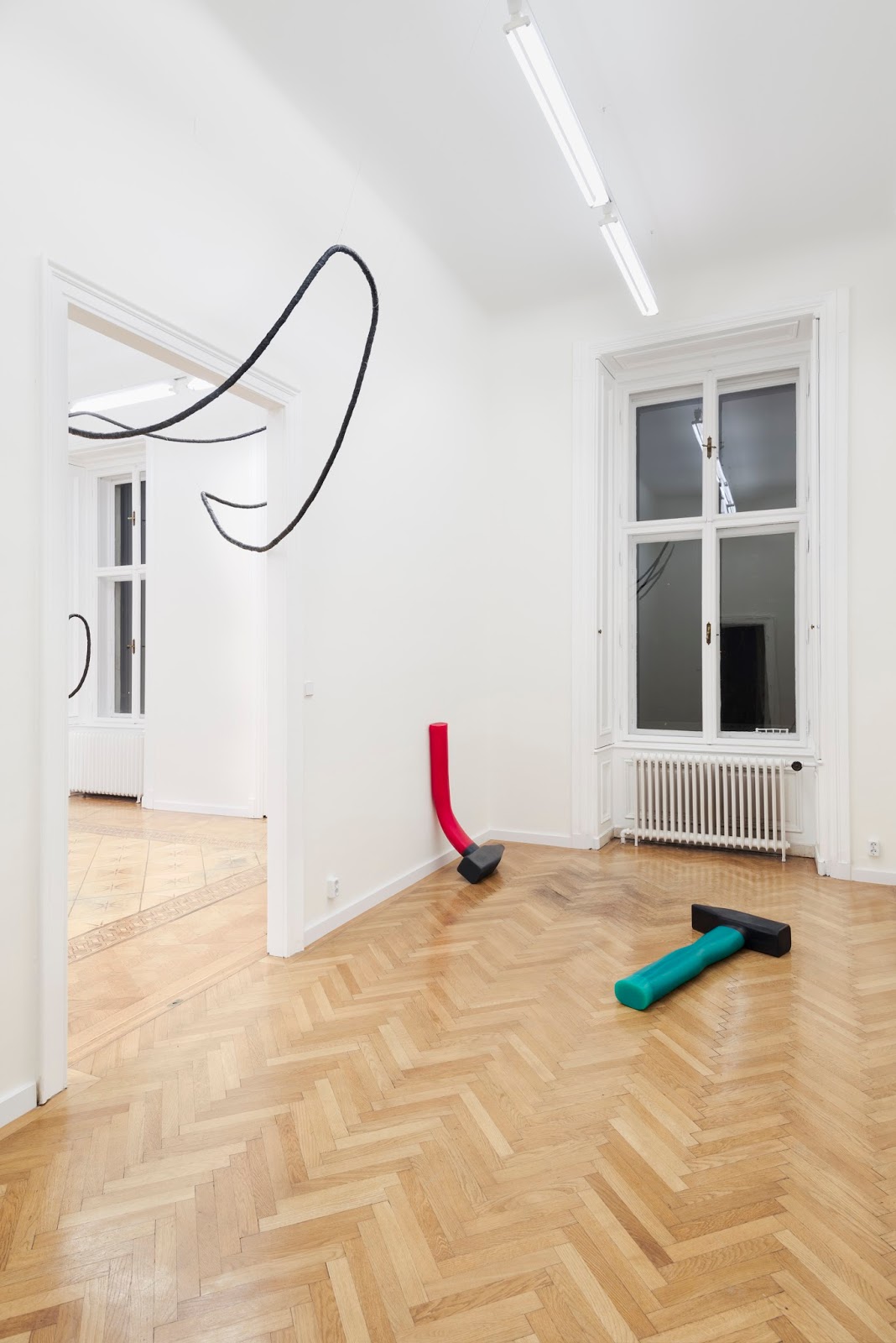 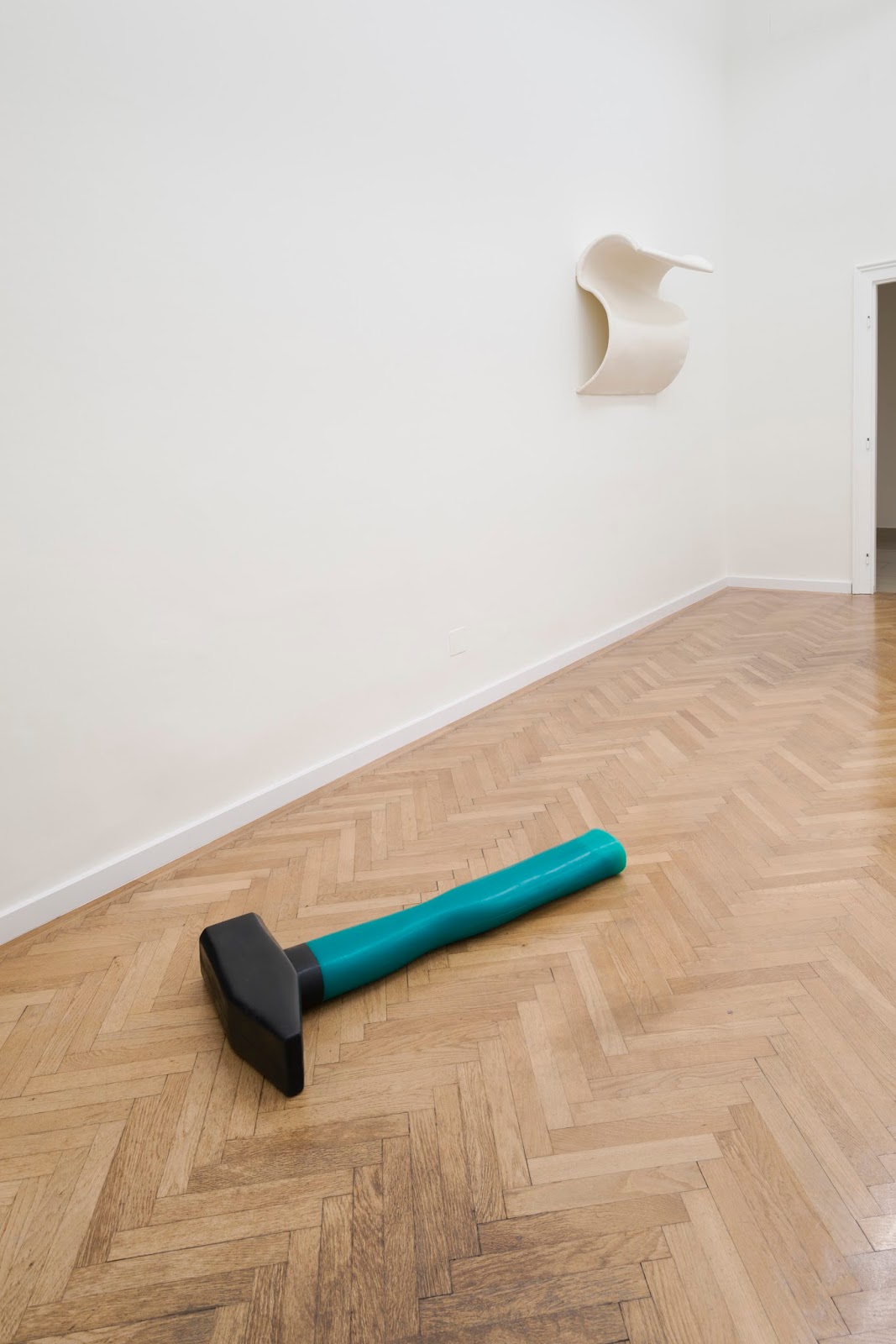 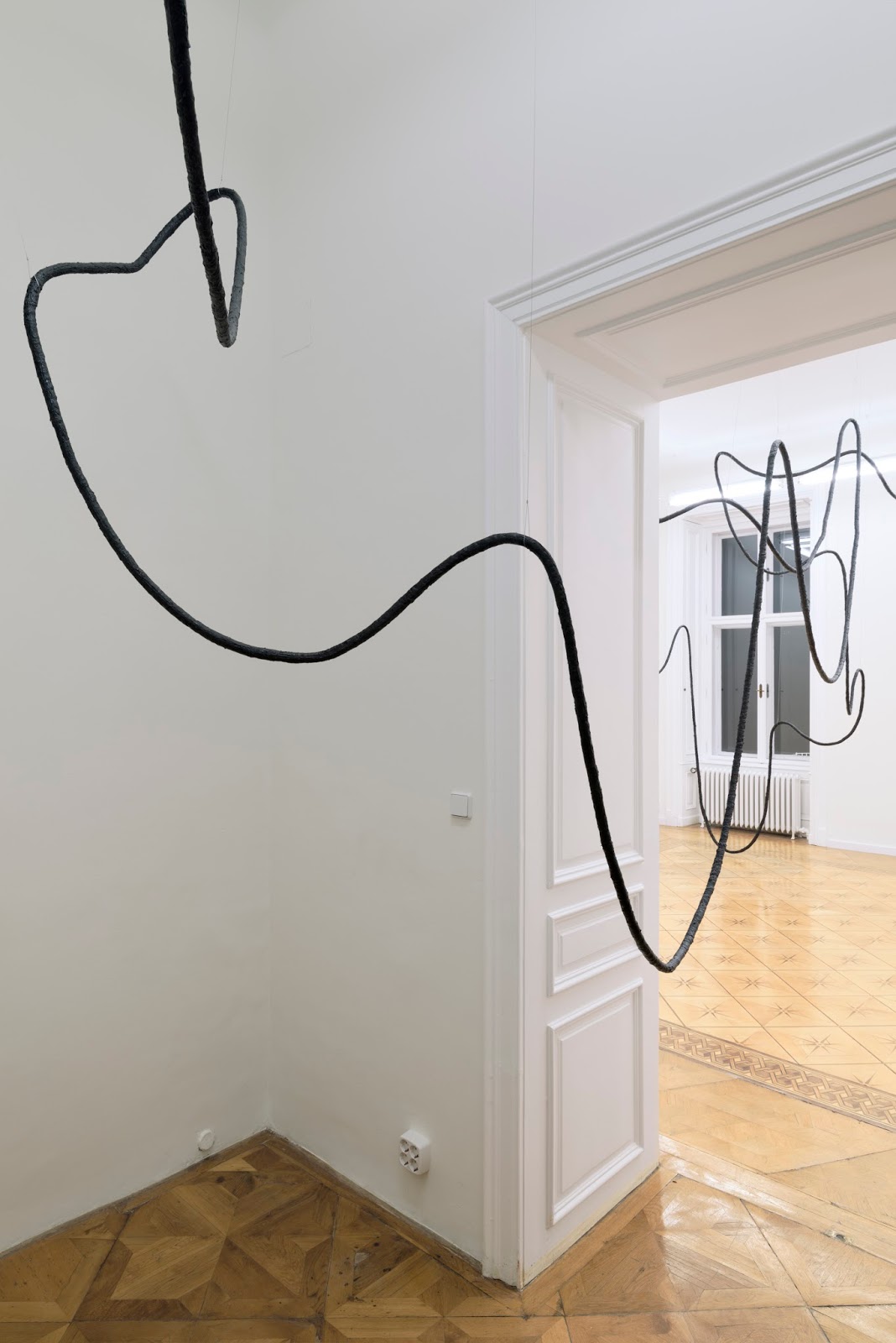 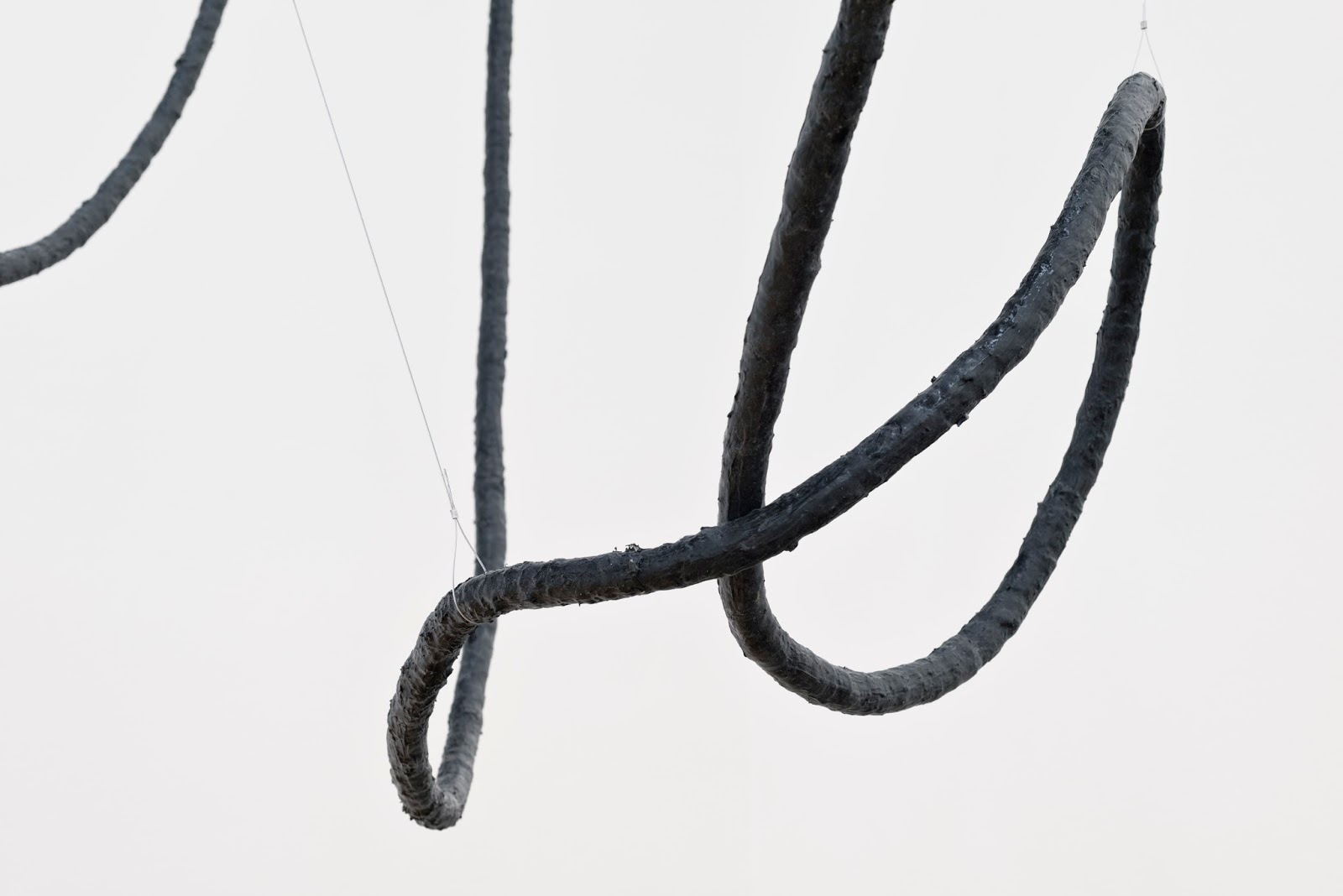 We are pleased to announce this year’s first exhibition featuring works by Olga Balema, Marlie Mul, and Iza Tarasewicz.
The sculptures by Olga Balema belong to her ongoing series Interior Biomorphic Attachments: amoeba-like sculptures that shape and are shaped by the room they occupy. Foam has been folded around metal structures and painted with several layers of latex. An almost 4 meter long orange version is situated close to the floor where it ripples along the wall, whereas a white, almost excessively curved structure is hung relatively high. In their conflation of exterior and interior the artist refers to these soft-hued biomorphs as “semi-abstract”. Works from this series were recently on view at Bergen Kunsthall (Bergen Assembly, 2016) and at Sculpture Center in New York (Puddle, Pothole, Portal, 2014).
The two sculptures by Marlie Mul, each laconically titled Hammer (2015), feature overdimensioned hammers in red and green, respectively. Replica is a recurrent issue in Mul’s work (which includes wooden clubs in papier-mâche and resin puddles, for example), but these hammers are scaled beyond their purpose (too big and too heavy to be handled) and rendered in soft and friendly silicone. Deprived of any function, and alluding to the body in scale and softness, they sit like obsolete objects in the corner or rest on the floor. Imbued with a comic form of pathos, their exhaustion or boredom almost call for empathy. The works were originally produced for the exhibition One, No One, and One Hundred Thousands at Kunsthalle Wien (2016), in which the sculptures were supposed to be moved around by the visitors who could mount their own version of the show (curated by Luca Lo Pinto).
Arena II (2016) by Iza Tarasewicz comprises a 70 m long handmade rope of hemp fiber and silicone. Hung from the ceiling, the sculpture floats in the air and marks a territory. In one iteration it appeared to draw an abstracted wavy, circular shape and on another occasion this loop twisted and draped around the room, producing a soft and open architecture. Historically the arena was an enclosure where sports took place, and it still holds true as a place of recreation and entertainment. But an arena also implies a place for political activity and debate. The modularity of the rope resembles the flexibility of the arena, which is affected by the subjectivities inherent within acts of public communication. Arena I was recently included in the 11th Gwangju Biennial in Korea.