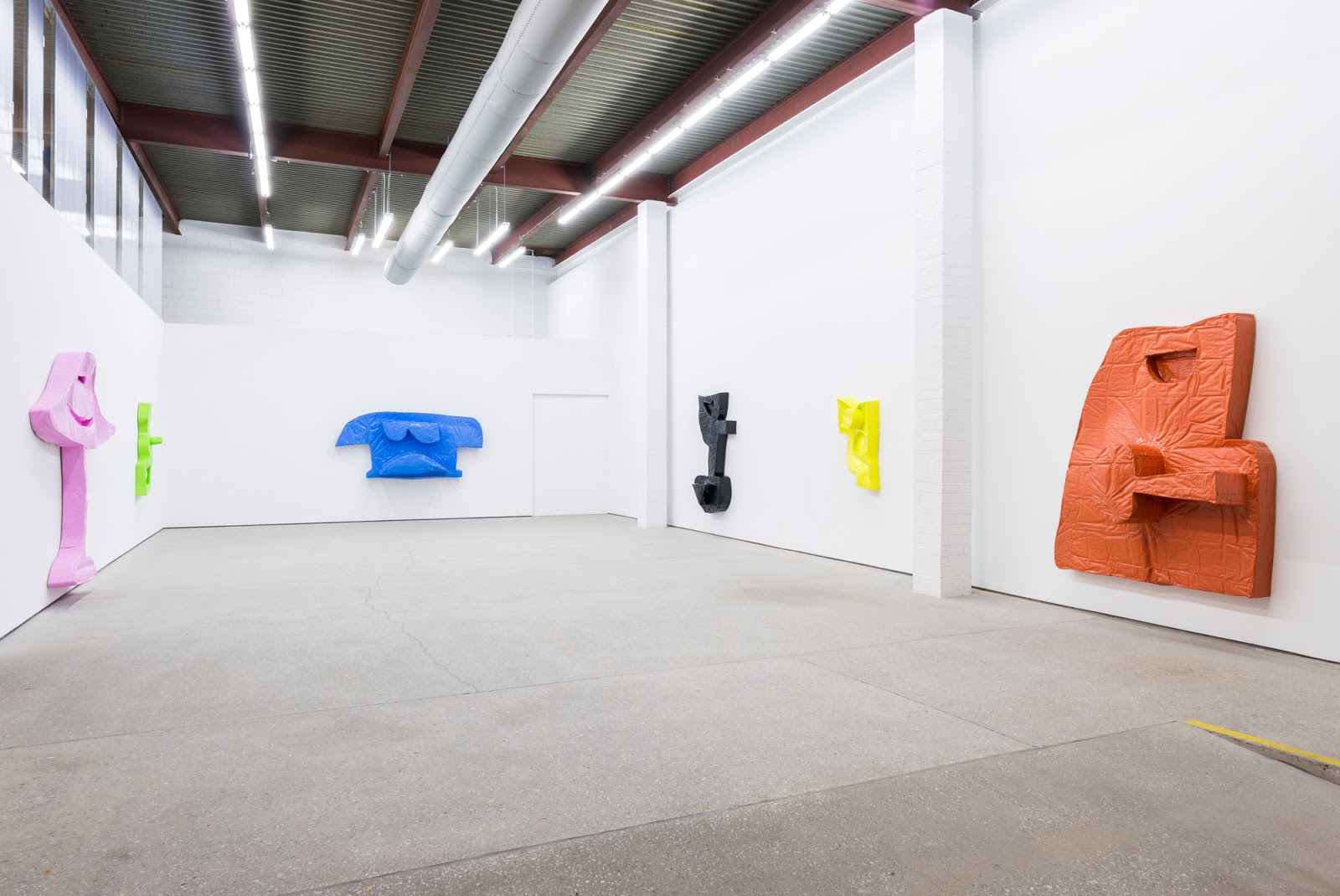 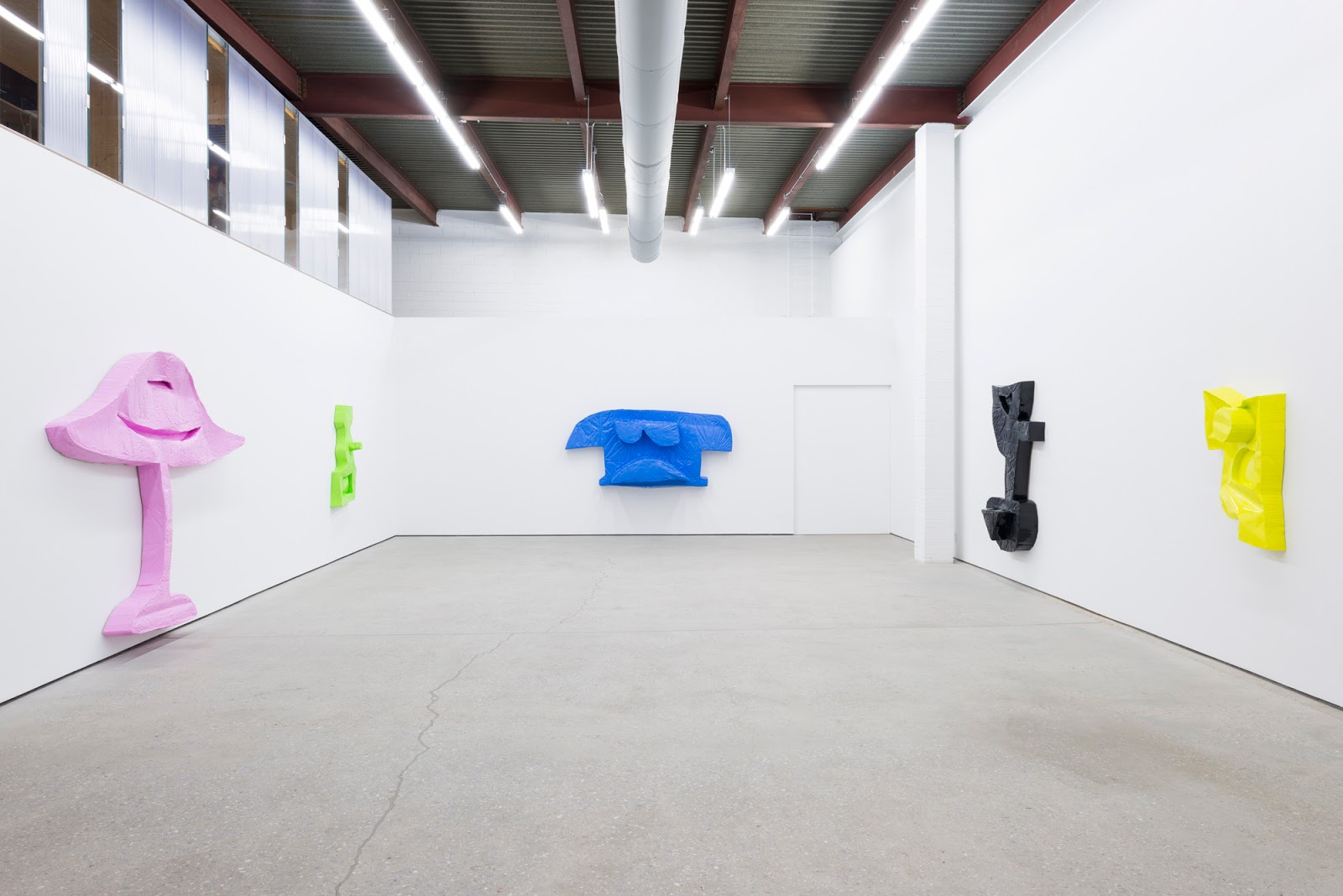 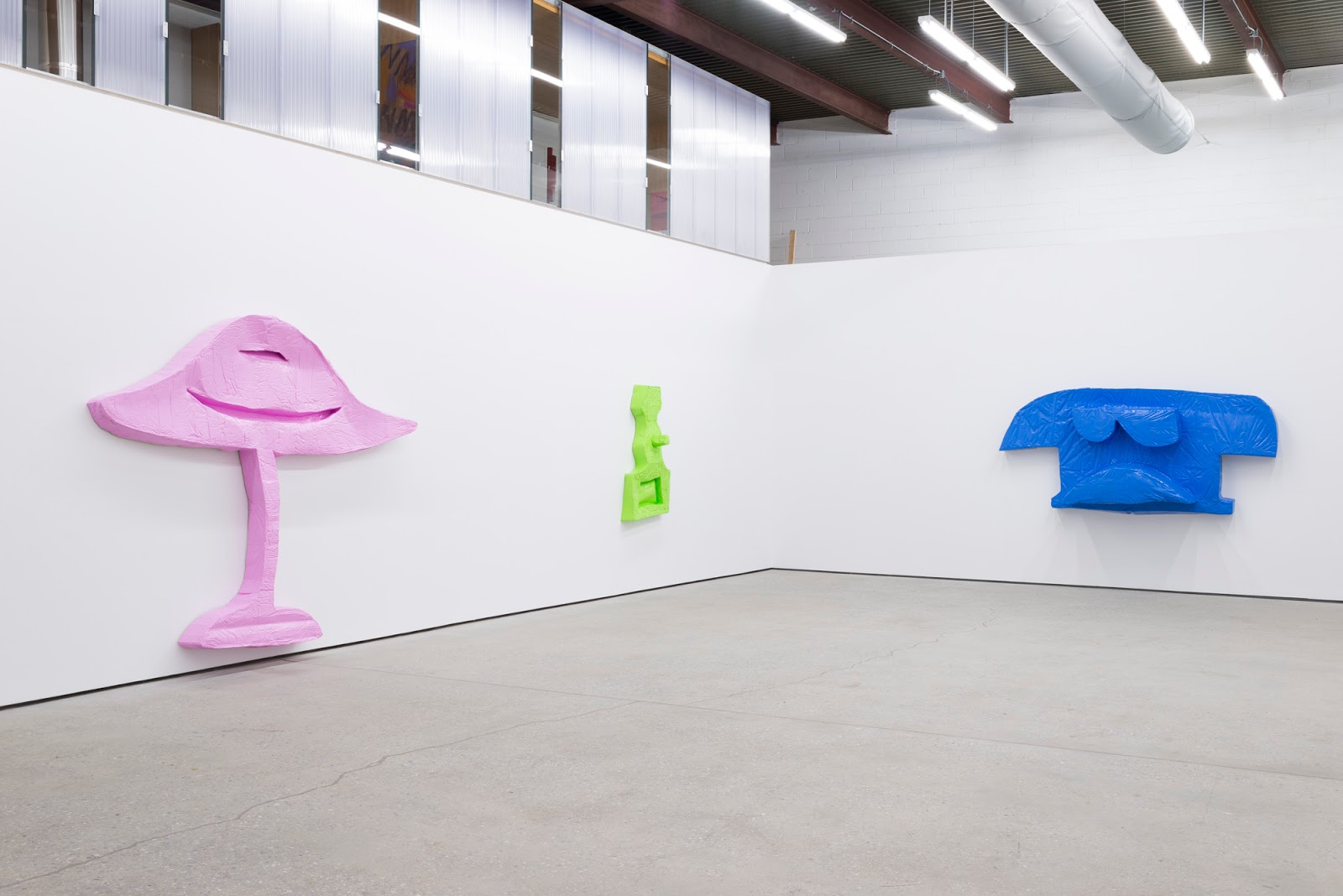 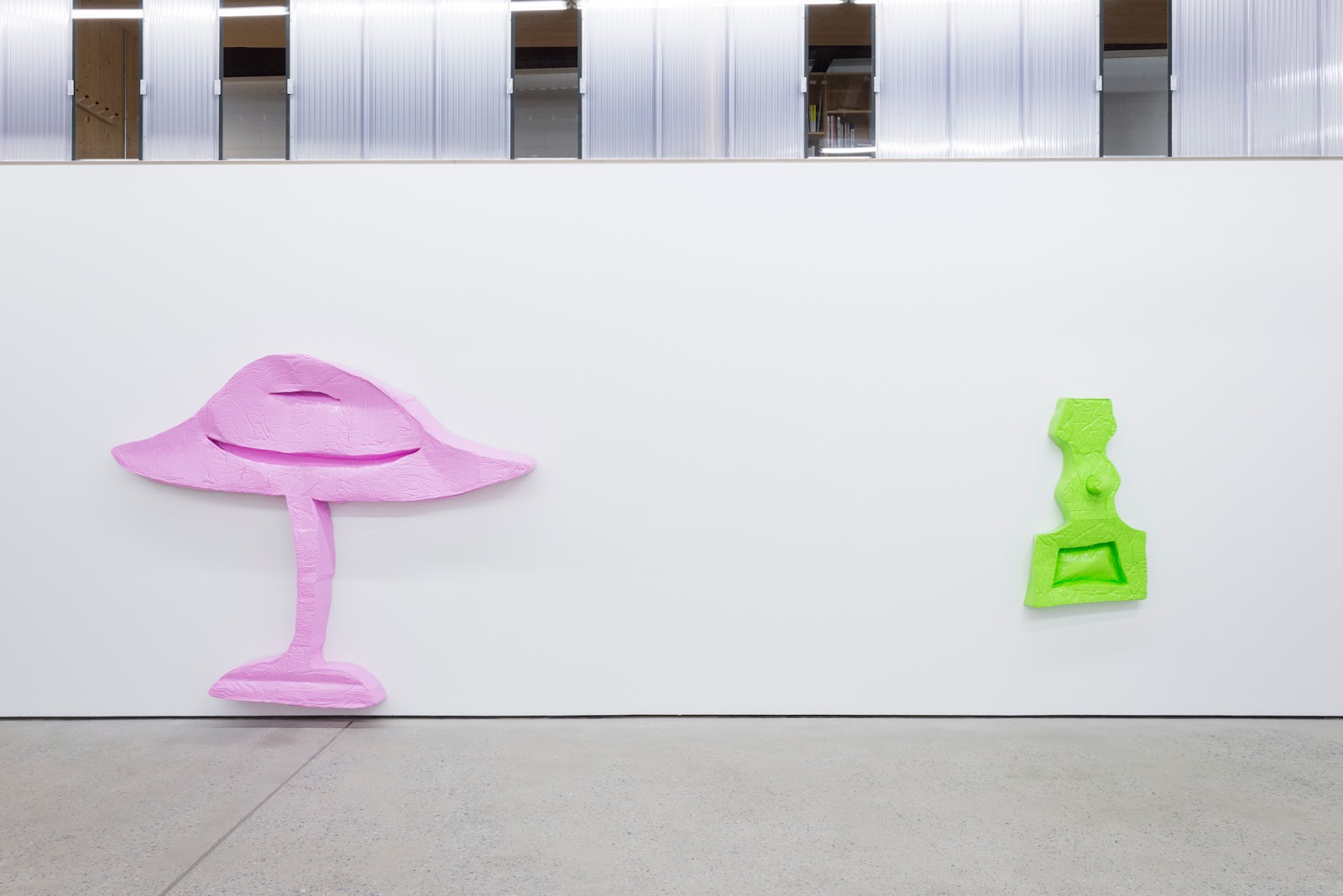 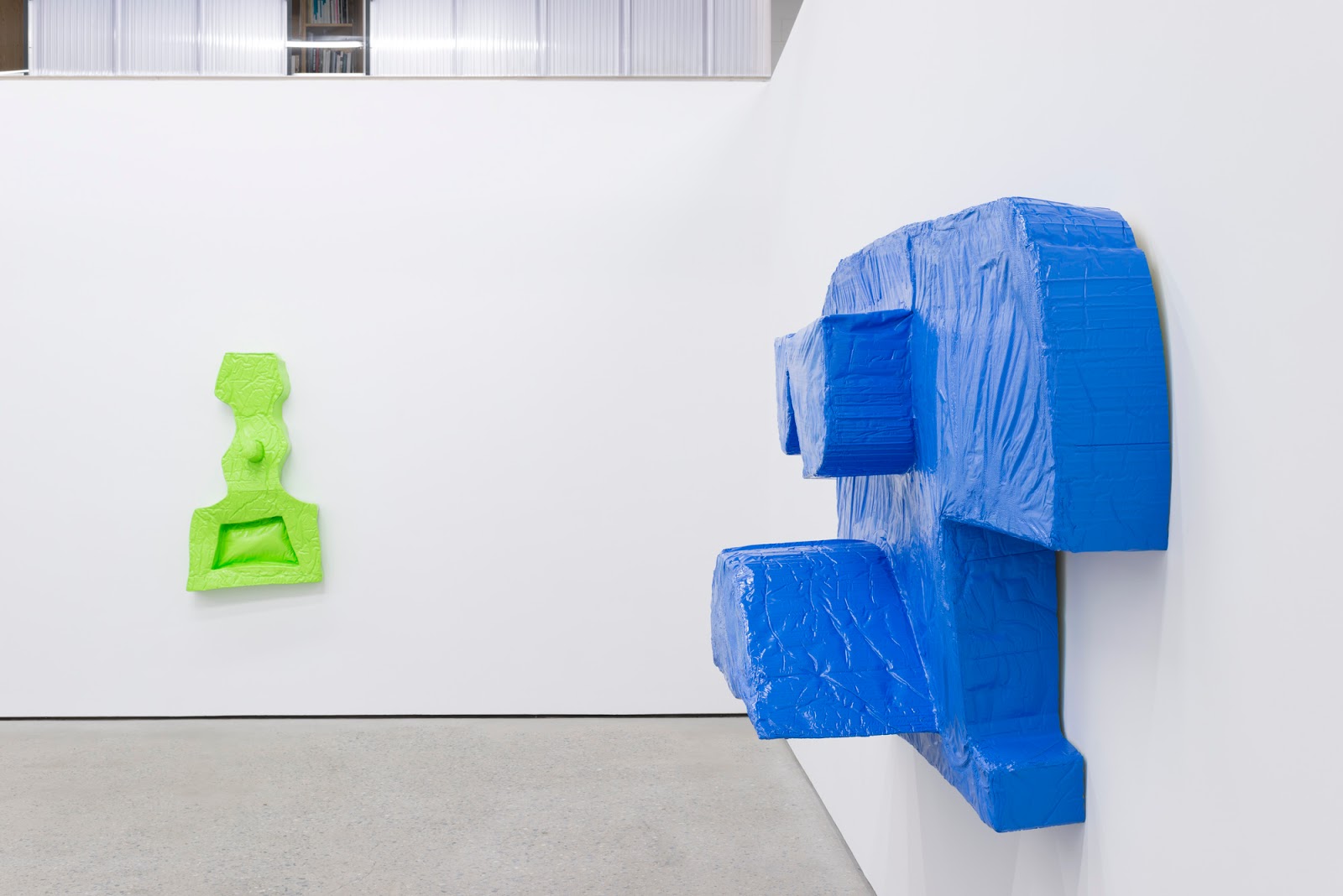 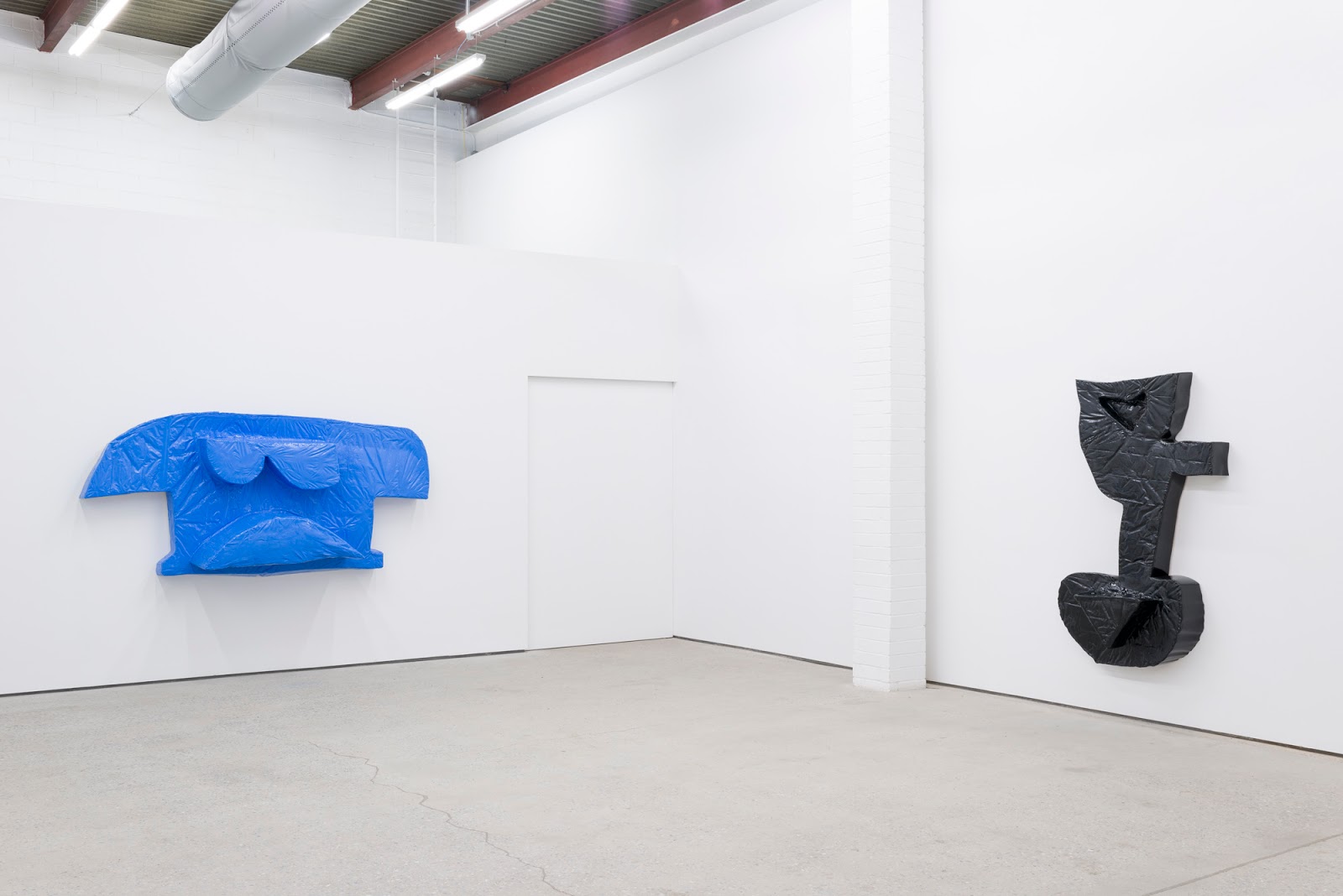 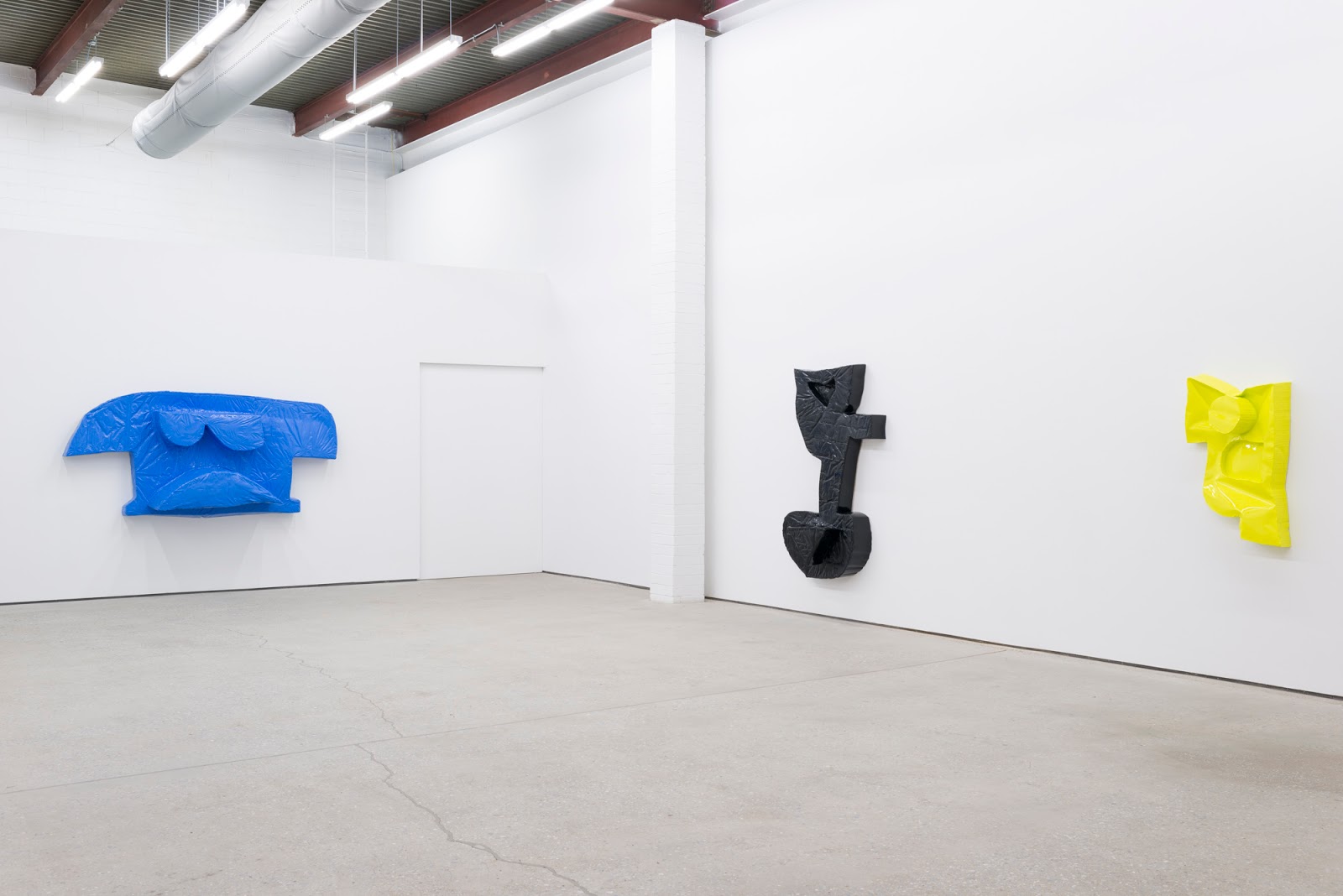 A mocking stoicism pervades “creepers” at The Journal Gallery, Daniel Boccato's first solo exhibition in New York. The shapeshifting works hang on the walls at eye level, facing us head-on, posited to torment, taunt, or seduce. Indifferent, they choose to keep mum.

Fiberglass and epoxy, adaptable industrial materials, dry to a sturdy finish that confers a density to the works and belies their hollow interior. Still, there is an illusive fragility, a remnant of the delicate cardboard and tape molds that once contained them. Tarp laid down during the casting process imprints wrinkles and folds on the surface, lending a deceptively plush appearance to the hard, unyielding shell. And if the glossy wall-mounted works recall the lineage of painting-cum-sculpture, there is no painterly trace: resin adheres to paint that has been applied to the mold, coating the work in color in one immediate, irreversible swoop.

The works run the gamut from the familiar or representational to the purely abstract. But they do not occupy a space between the two poles—they span them, alternatively begetting and resisting figuration.

A silhouette is a hint of a thing. Boccato collects the outlines of objects, stripping them of narrative, context, and ownership. He has repurposed the found shapes to create the monochromatic sculptures in “creepers,” each only vaguely reminiscent of something. Protruding elements, dimples, and depressions on the plastic surfaces grin back at us at first, indexing grimaces or sneers. In a double take, the human reference is lost and we are reminded that these, too, are forms.

Daniel Boccato was born in 1991 in Campinas, Brazil, and currently lives and works in New York. He received his BFA from the Cooper Union School of Art. Boccato’s solo exhibitions include “rot pear rot” at Formato Cómodo, Madrid, Spain (2016) and “an eye for an eye” at Kasia Michalski Gallery, Warsaw, Poland (2015). His work has been exhibited at 39 Great Jones in New York (2014) and included in several group exhibitions, among them “Mythology” at Arsenal, Toronto, Canada (2016); “Scent” at Dickinson Roundell, New York (2015); and “Mythology” at Division Gallery, Montreal, Canada (2015). Most recently Boccato collaborated with the French artist Loup Sarion to create a permanent public sculpture, Le Géant de la Digue, 2016, on the occasion of "Asphalte#2,” a public arts biennial in the city of Charleroi, Belgium, which was unveiled in September 2016.