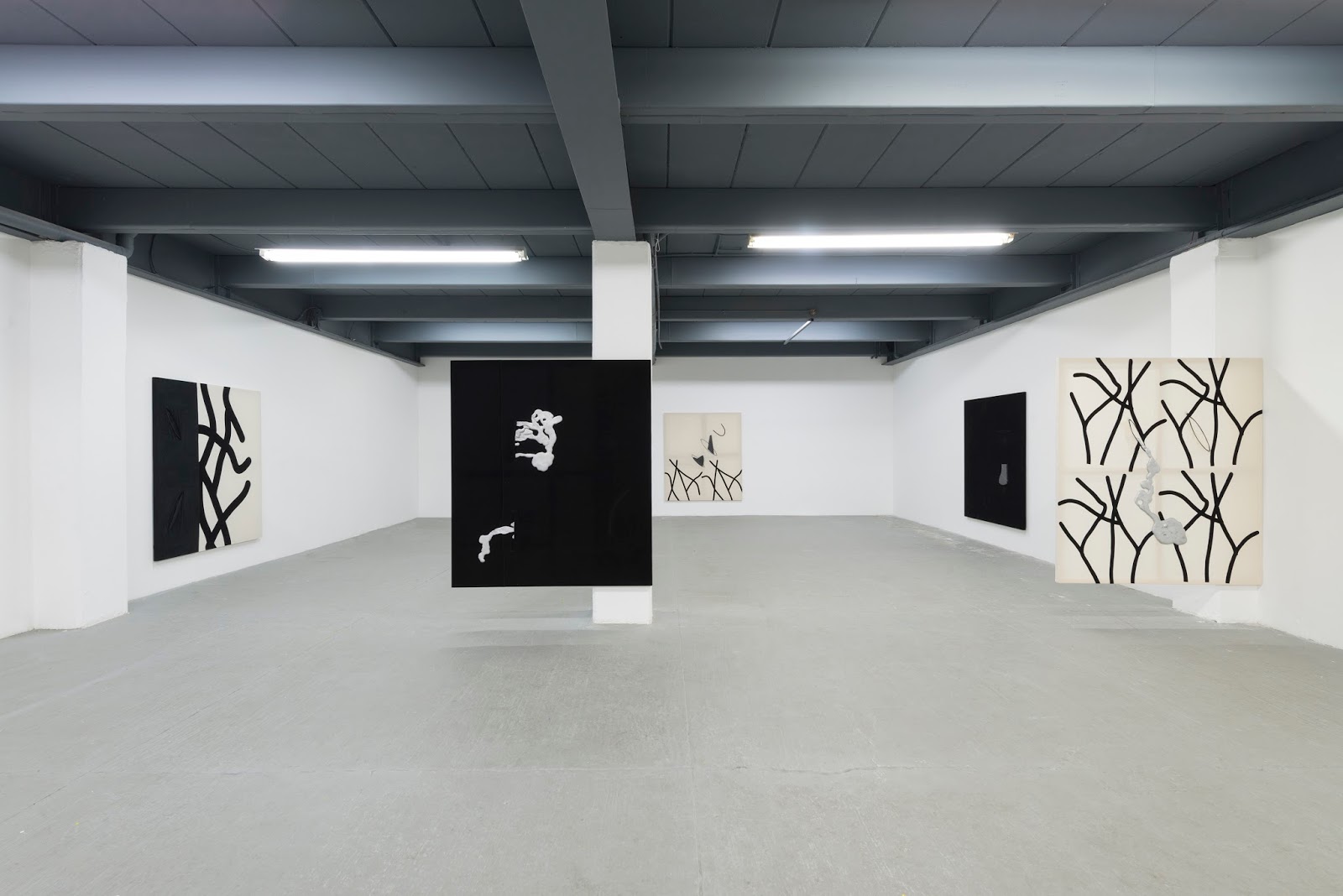 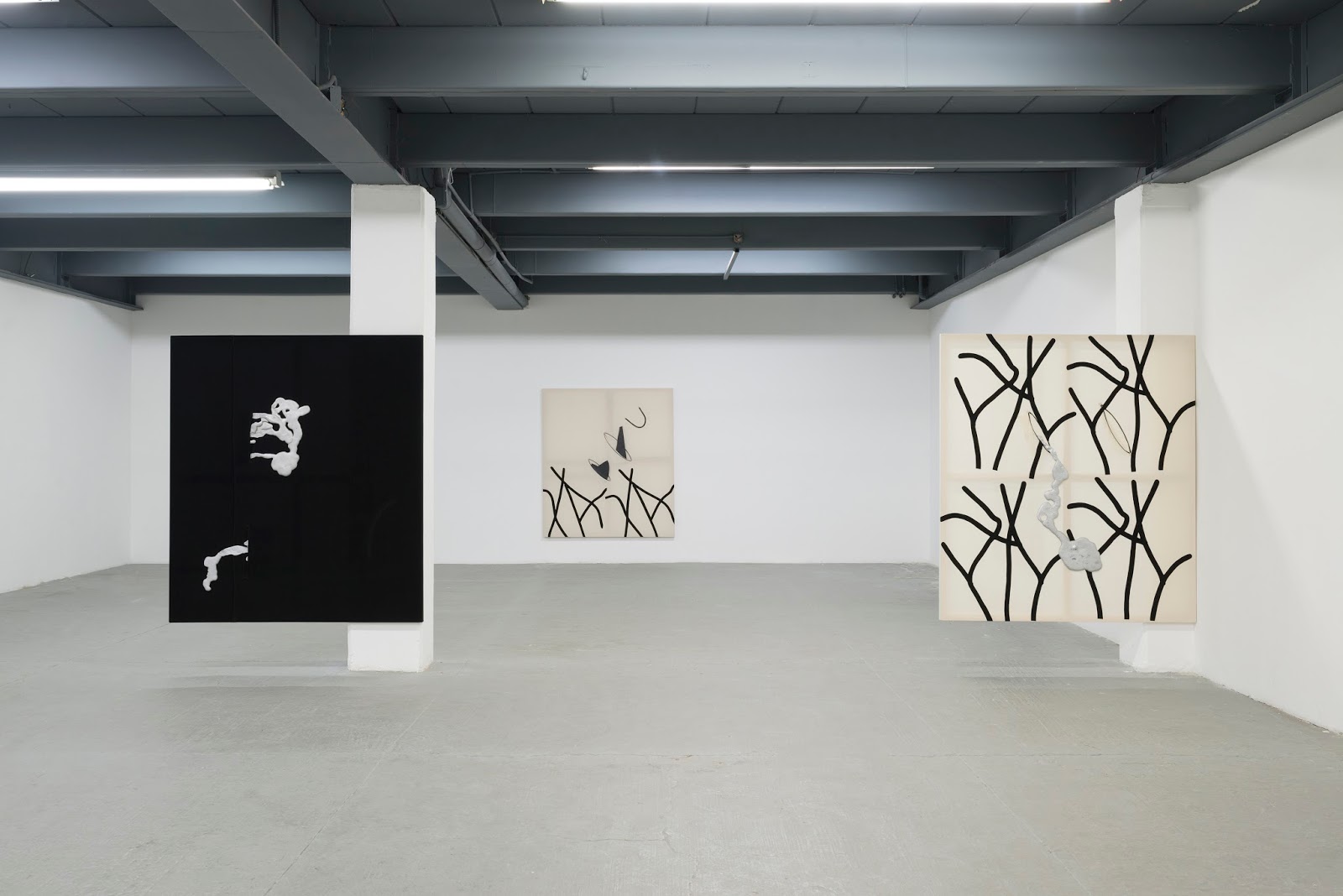 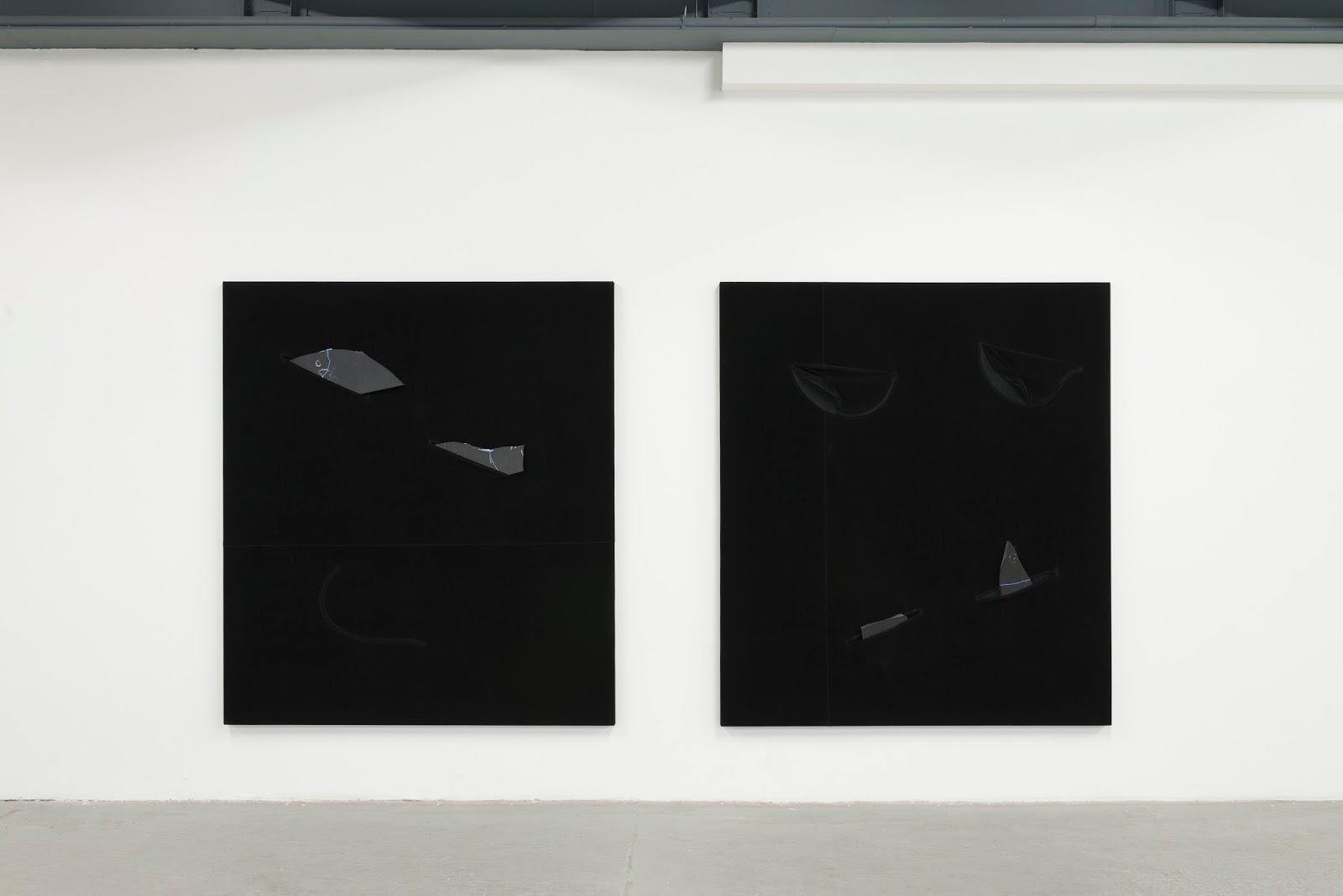 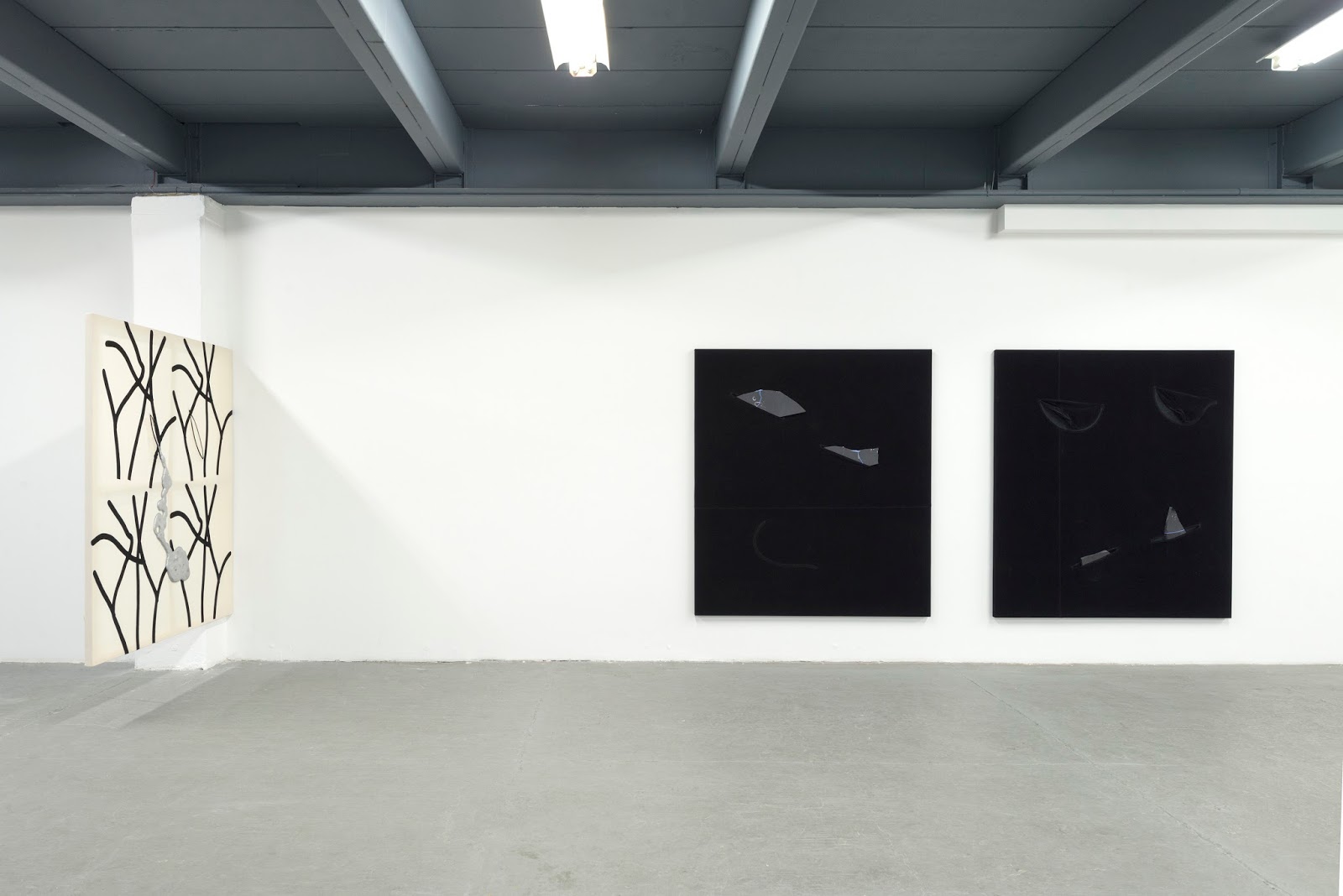 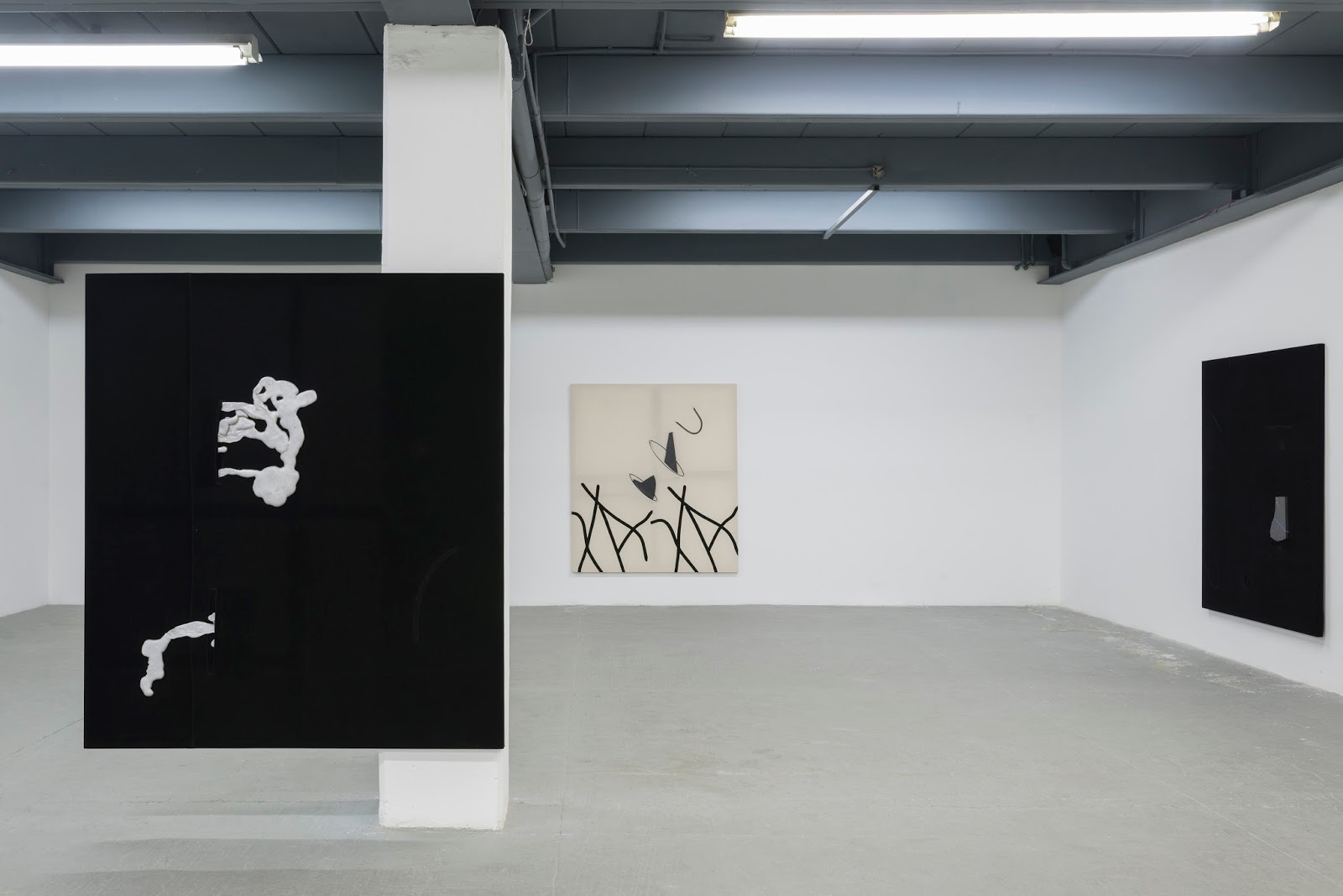 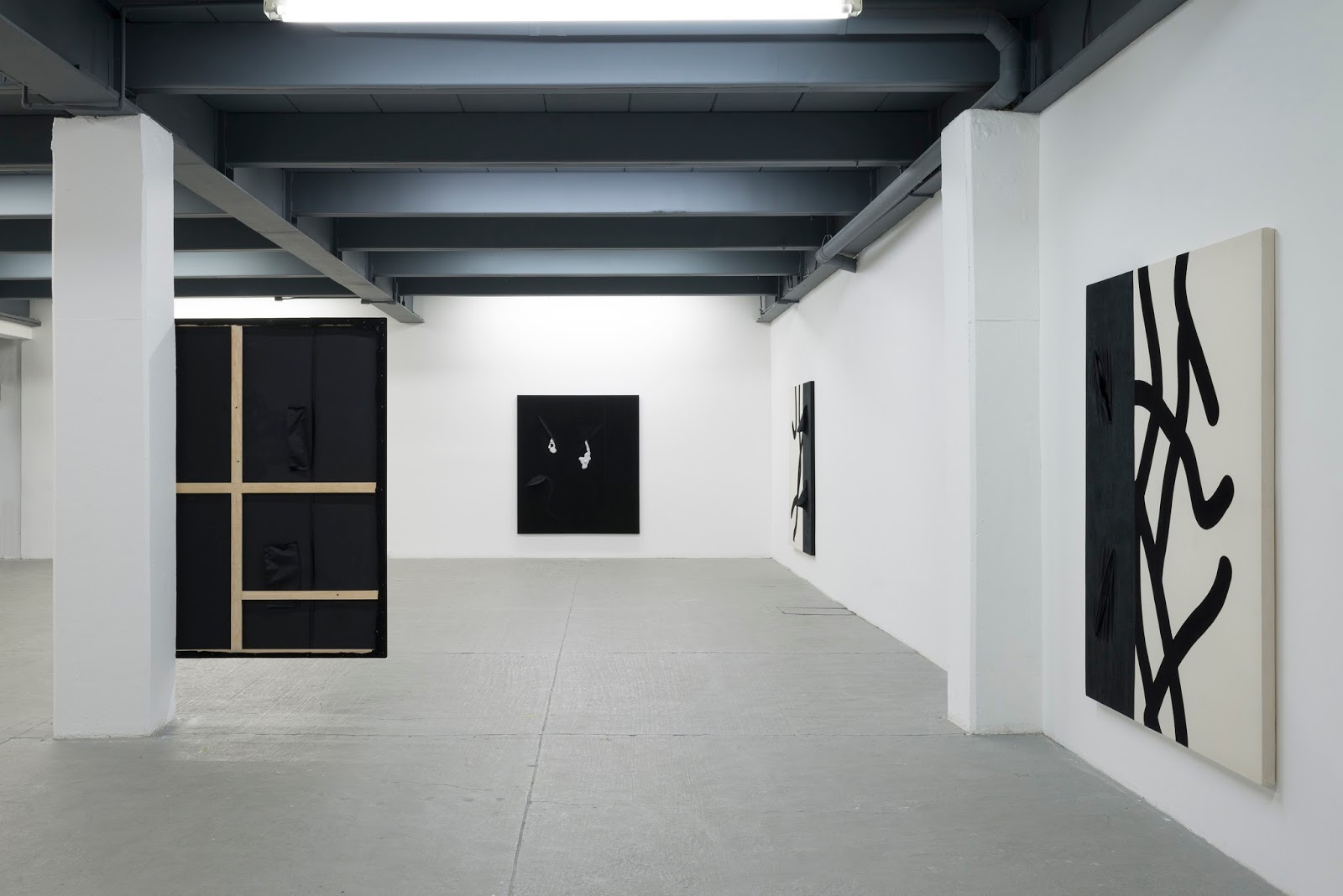 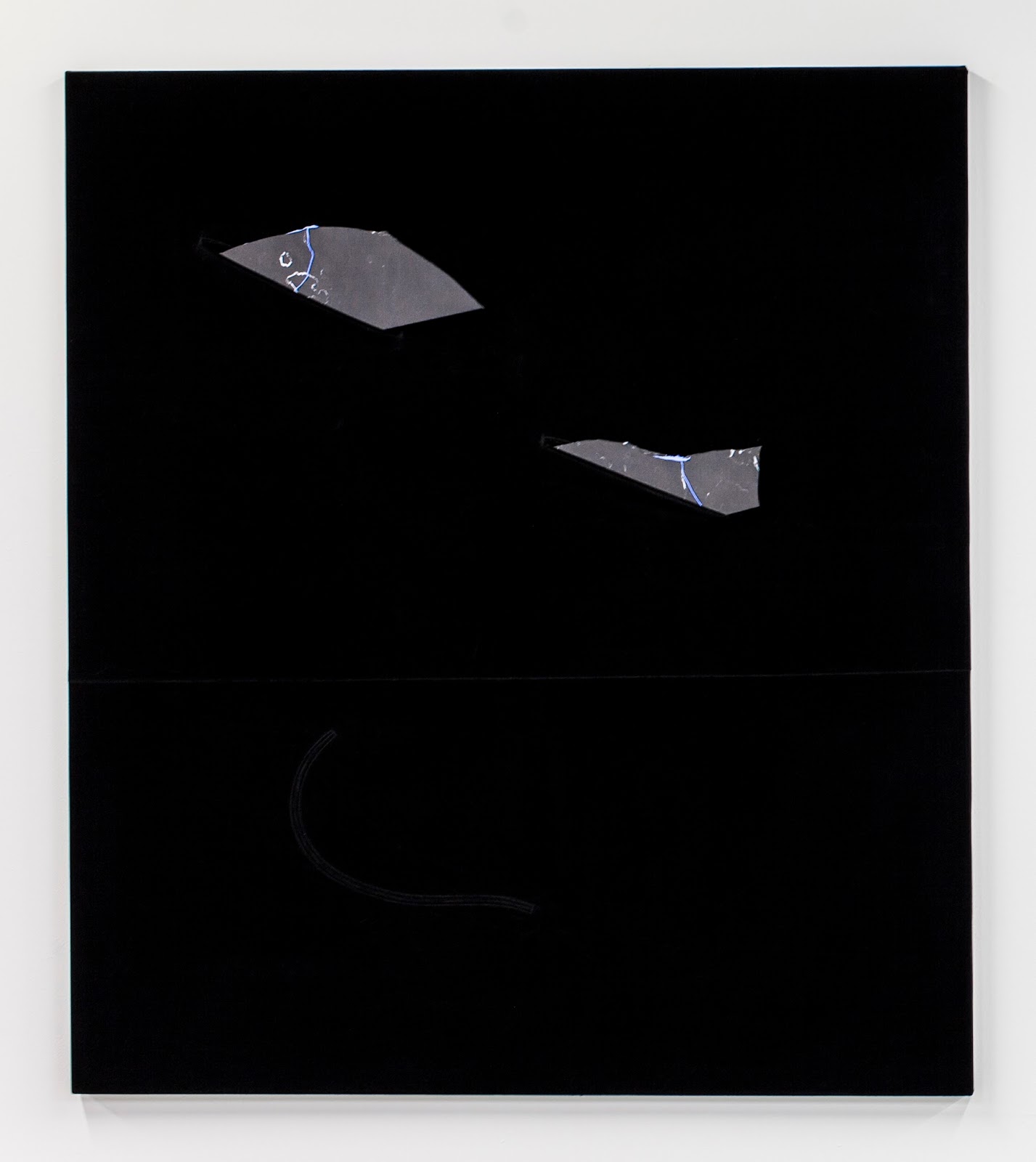 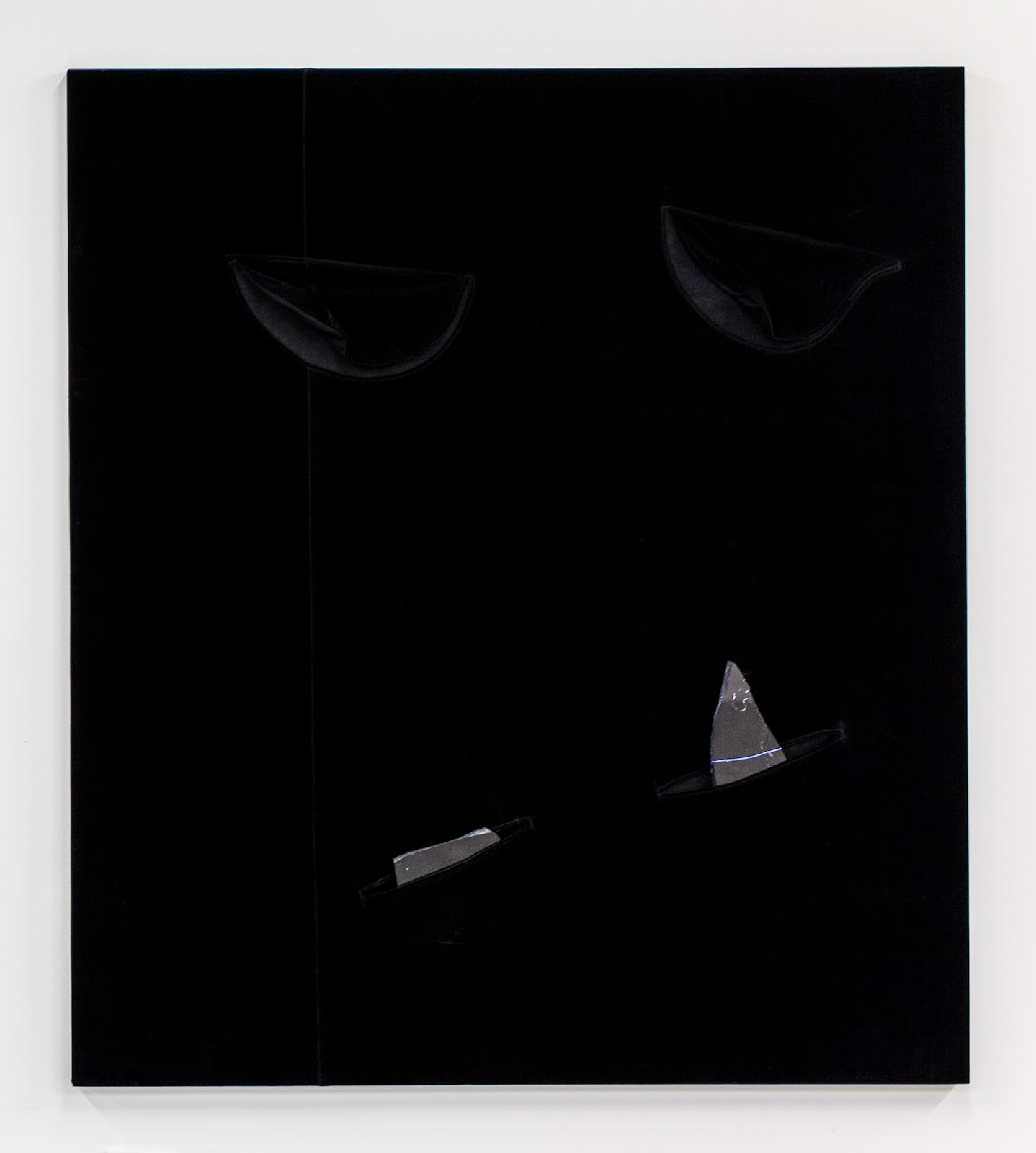 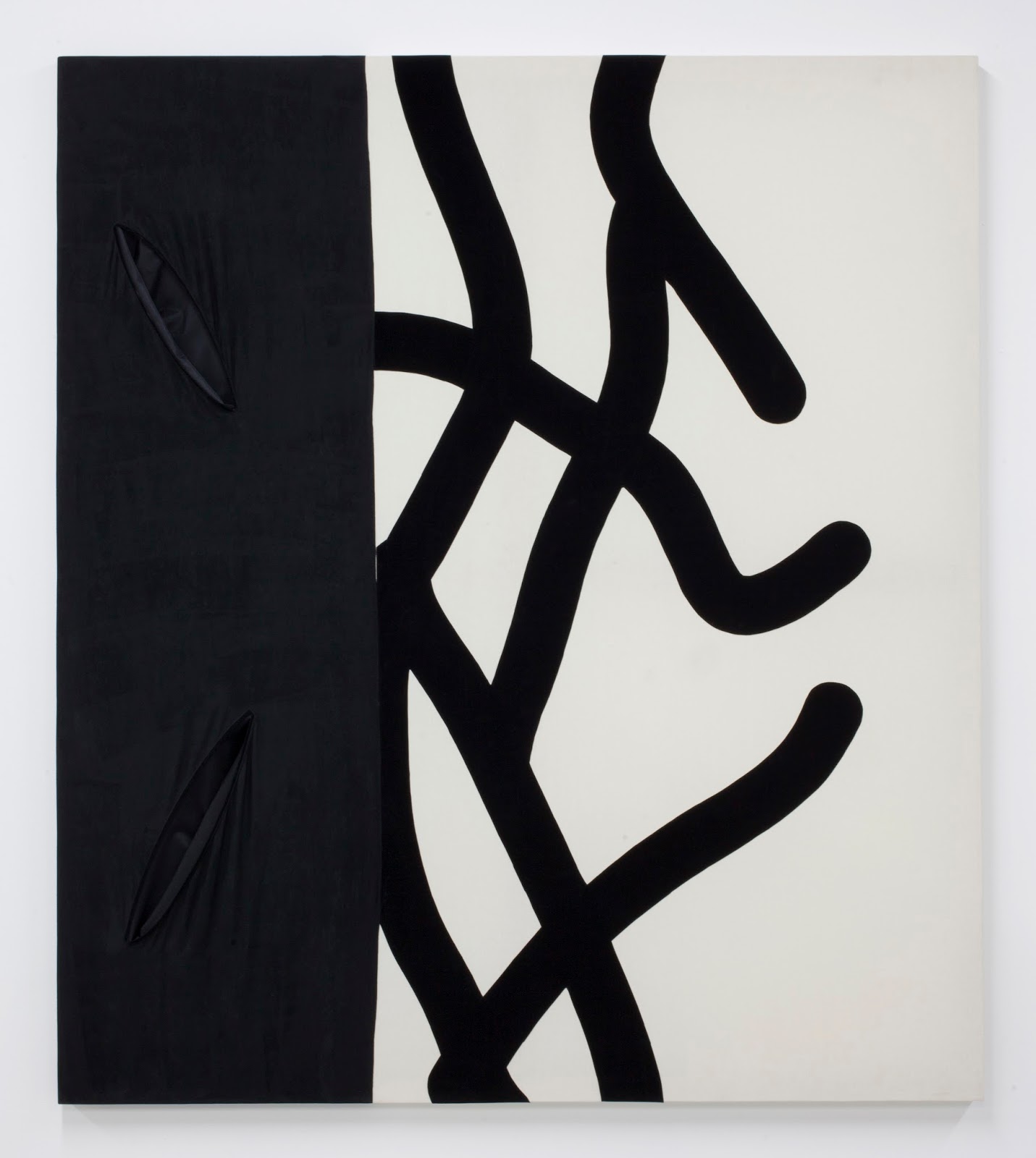 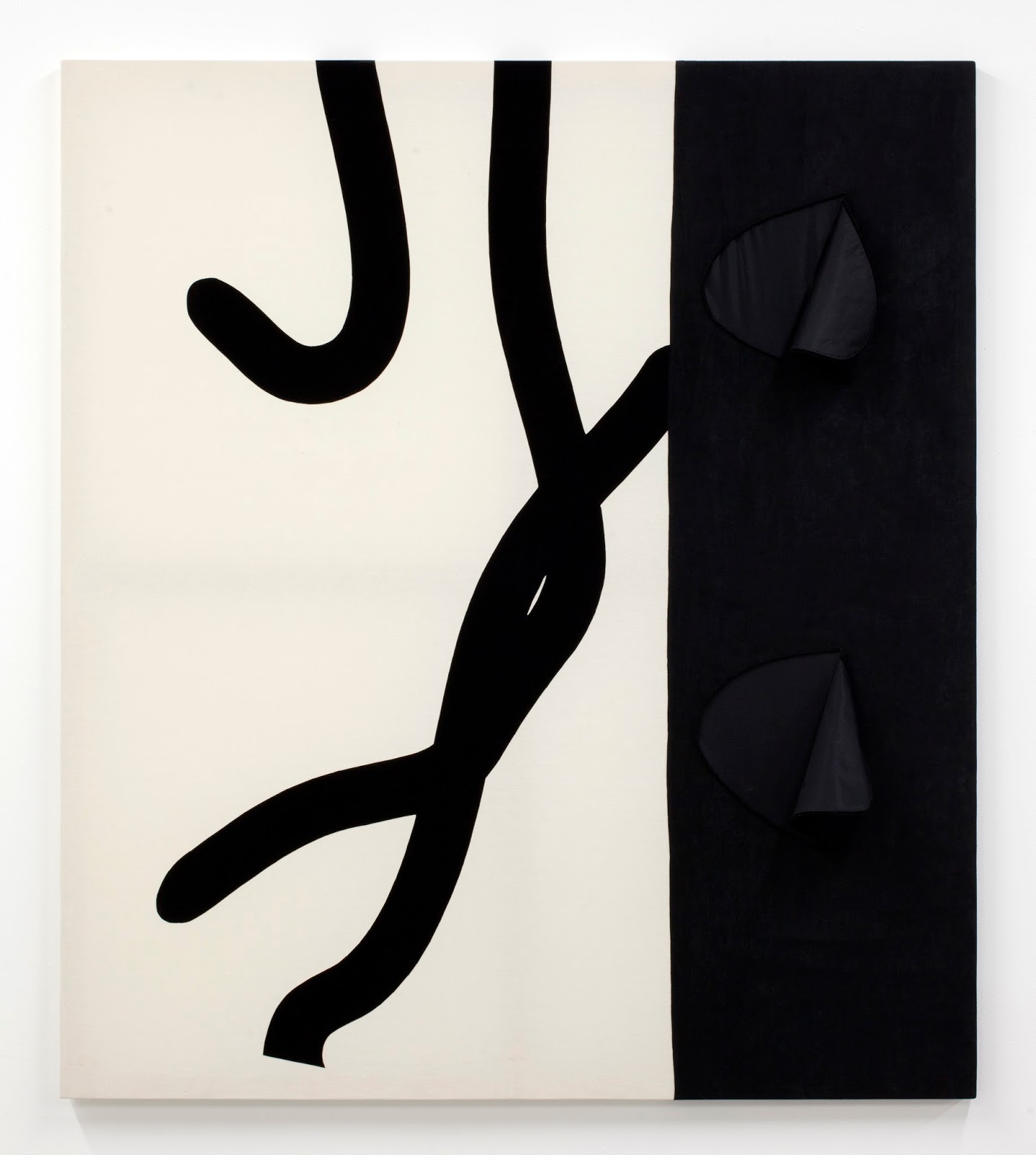 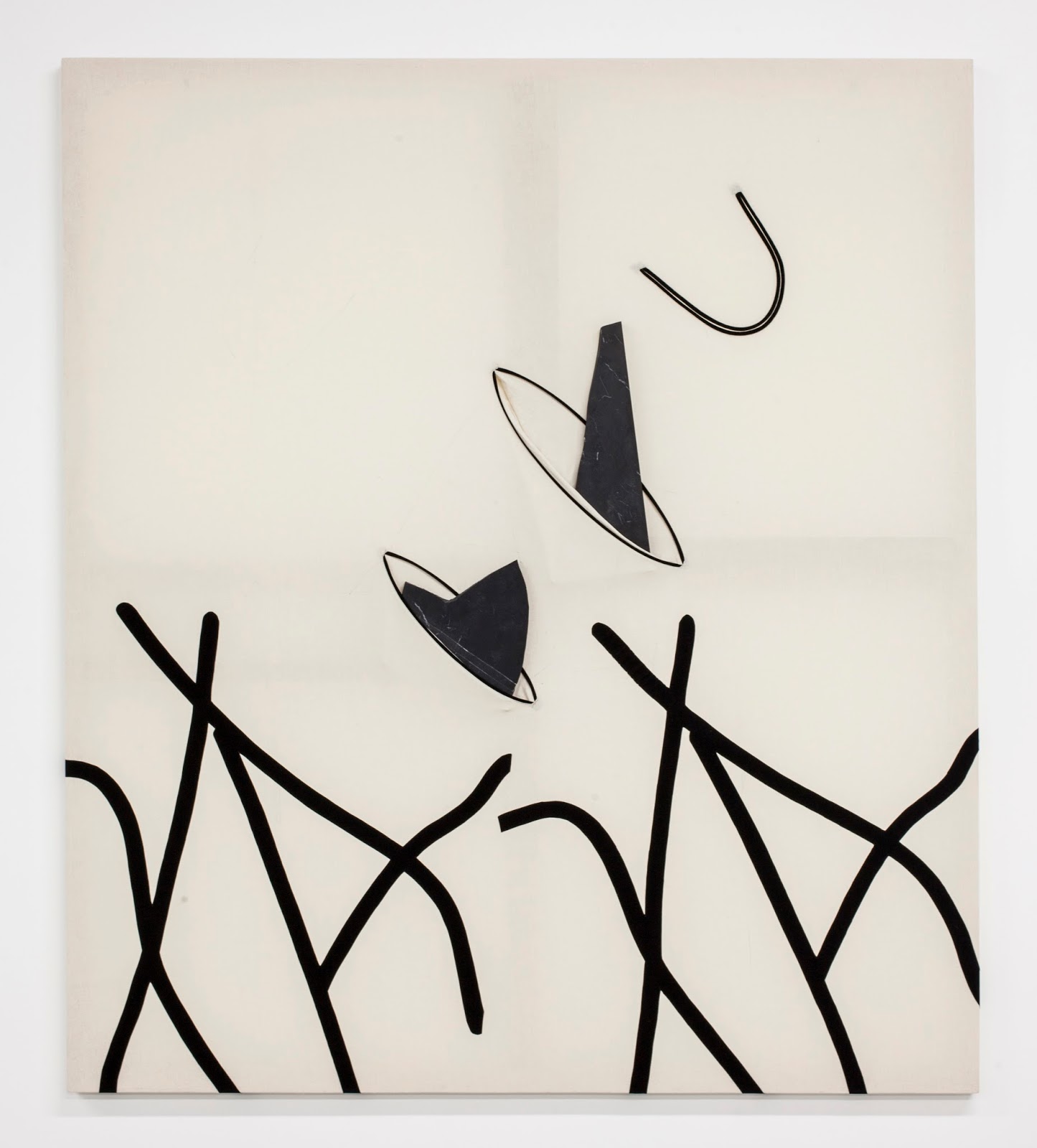 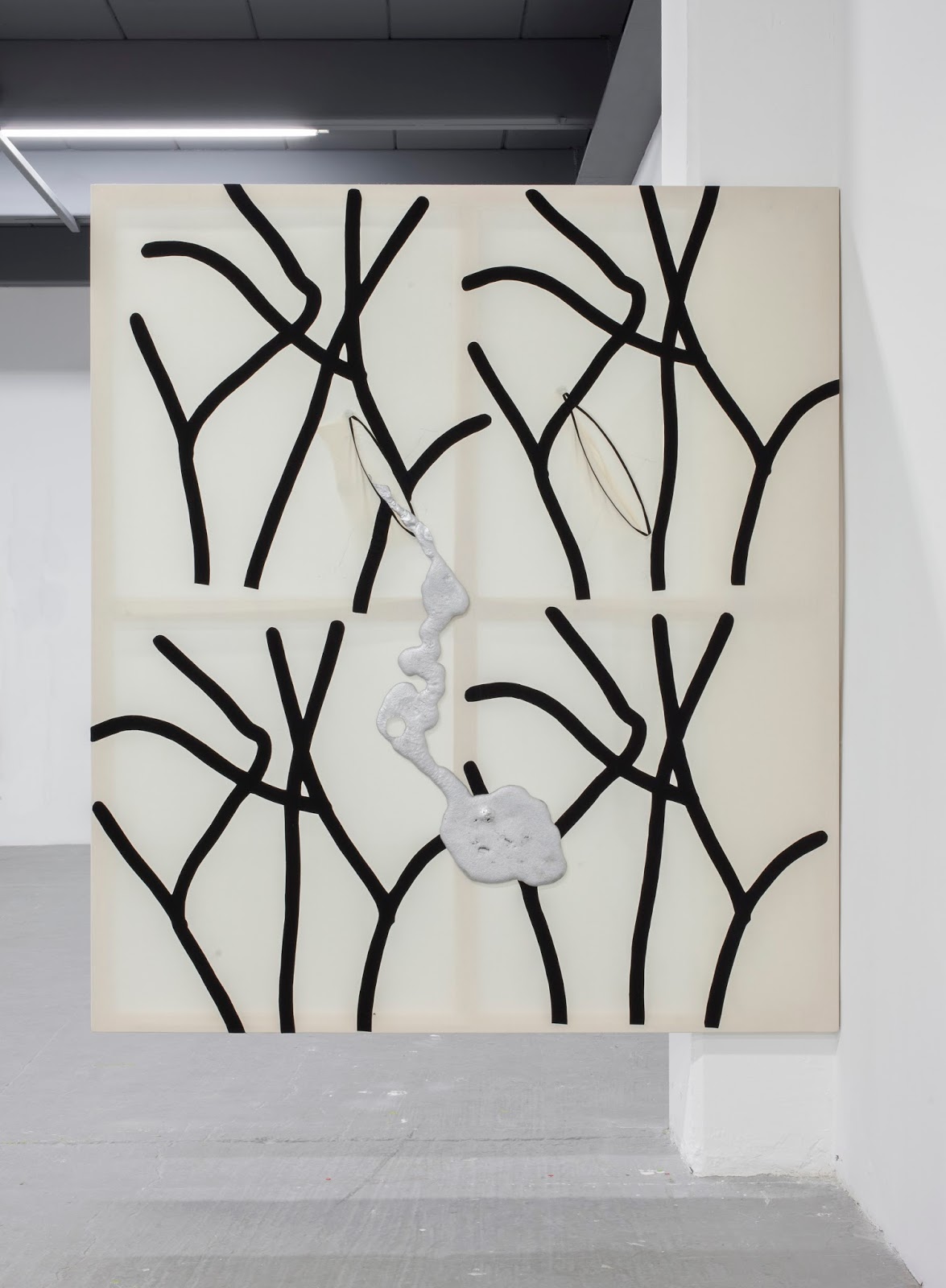 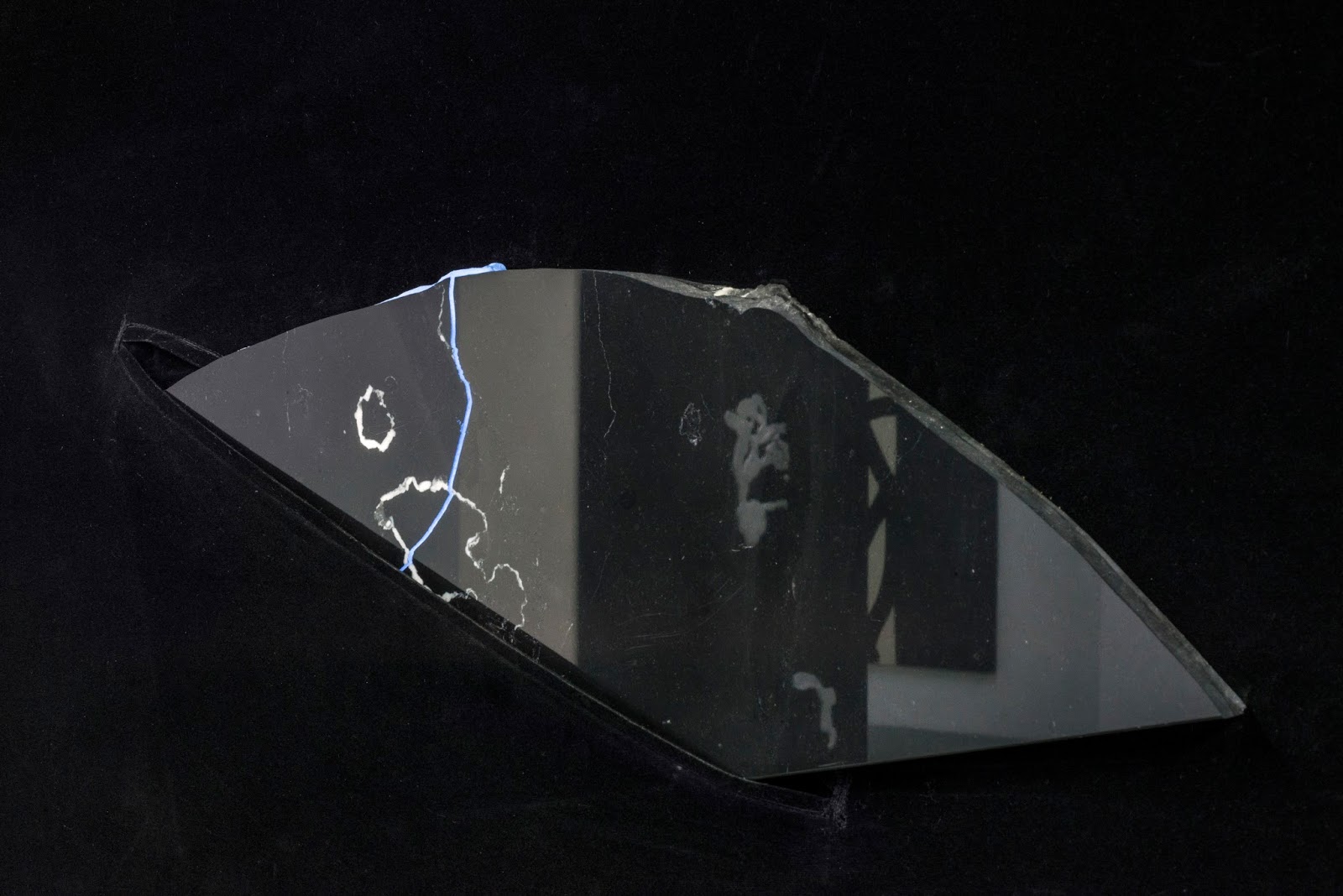 Upon a first glance into Mohamed Namou’s exhibition, one encounters a prominent sense of duality: black and white, smooth and rough, organic and artificial —contrasts of materials, textures and compositions held, almost silently, on the wall in the shape of tableaus. But then, what initially appeared to wear a veil of flatness opens up into an array of details, thus turning into a procedural multiplicity.

Works of apparent flat dimensions hang separate from the wall, nearly floating in space, denouncing and at the same time refusing its limitations. Hanging but superseding its support, Namou puts the trick up for display, allowing the spectator to spear beyond the surface and into the images backdoor. This exploration allows the tableau to become a presence, almost blocking your way, a sculptural obstacle that, once crossed, is proven to be a mere screen for something else.

Namou’s works bear multiple layers of dimensionalities, playing with echoes and folds, pointing to a bifurcation of possibilities. And so it is this notion of flatness the work underlines: the paradox and the inertia of it.

­— It doesn’t exist in the real world.

Enhancing the fragility of liminality, the pieces draw on the notion of the fold as a space of pure potential, creating at once a way out and an invitation to peek in, hence holding the viewers gaze to linger on an in-between: in a playful manner, the pockets point to a dynamism in the tableaus, themselves filled with extending objects; objects that transcend their surface and show their veins. Because there is indeed movement in this branching out —a drive of its own­­—, drawing the viewer towards new approximations.

Proximity also amplifies the sense of contrast cohabitating in the work, thickening the velvety black that resembles a threshold, opening itself to the viewer. Creating a void and emphasizing its pull, the works textures provoke a perspective of deepness. Textures that not only speak of such abyss but also allow for the illusion of submersion: a black hole. Demanding contiguity.

Evoking a cut in the linear gaze, this depth allows to move past the surface and into a sense of forwardness —of futurity—, only to suddenly be transversed, in a pictorial effort, by a solid element: a stone. A marble whose sleek, clean-cut surface is quickly proven to have yet another side —an inside— running deep in the form of a blue vein. Disrupting, like the pockets do, the notion of a defined perceptible presence, and teasingly pointing to a split that holds the marble in both a space of visibility and one hidden from view.

And in this process of transmutation lingers the inter(action) where, like with slang, meaning is shaped in a relational fashion; where the solid signifier is left behind and placed in transit, in an almost static coming to be. Breaking down estrangement and creating a jolt in the logos, the tableaus speak of a moldable excess; of the trash that is let out and that is readily picked up. Impelling the image and melting out all rigidity in order to transform: a break that nonetheless bridges —smoothly— from mechanic to organic, making all the pieces amount to an unequivocal new beginning.