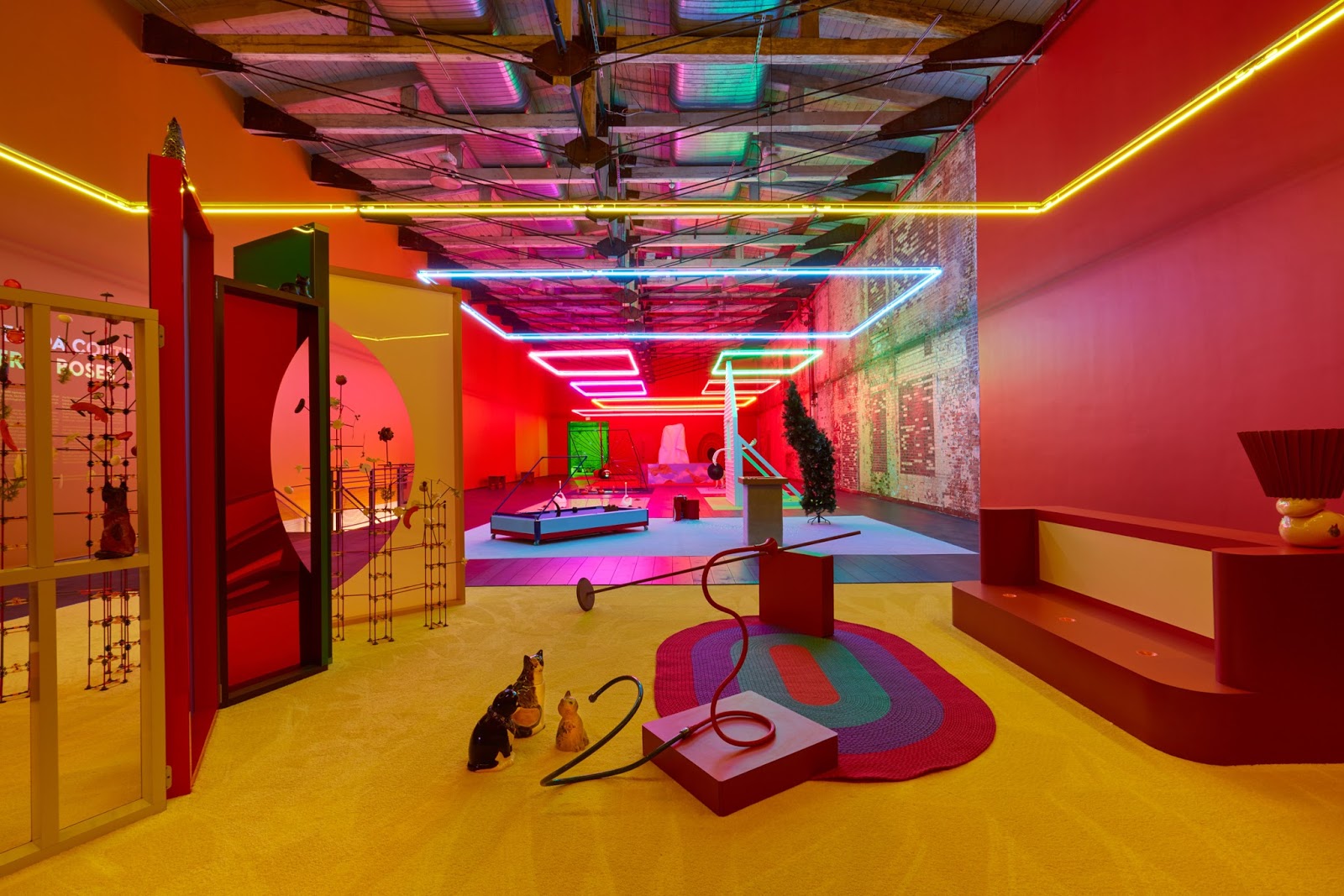 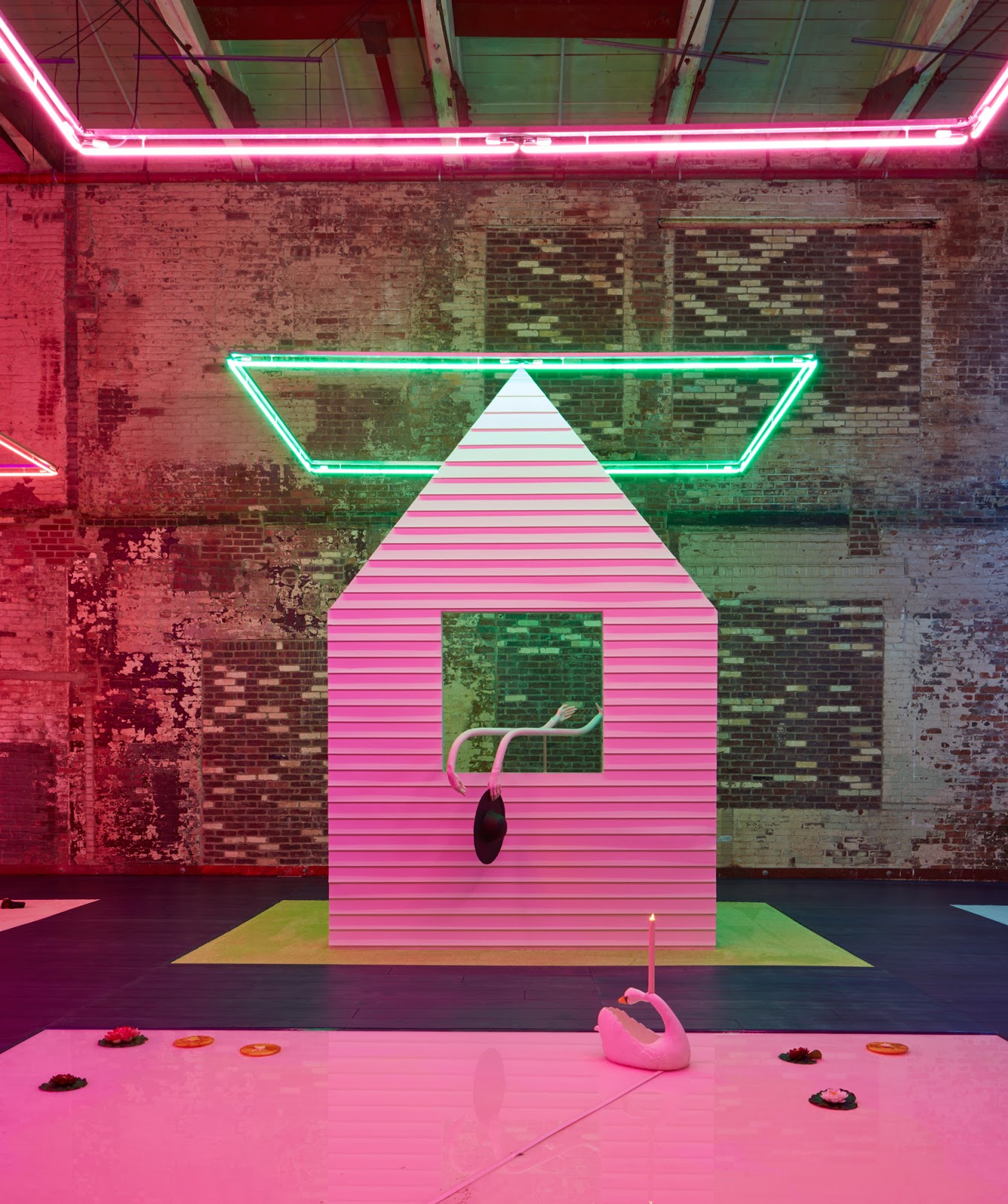 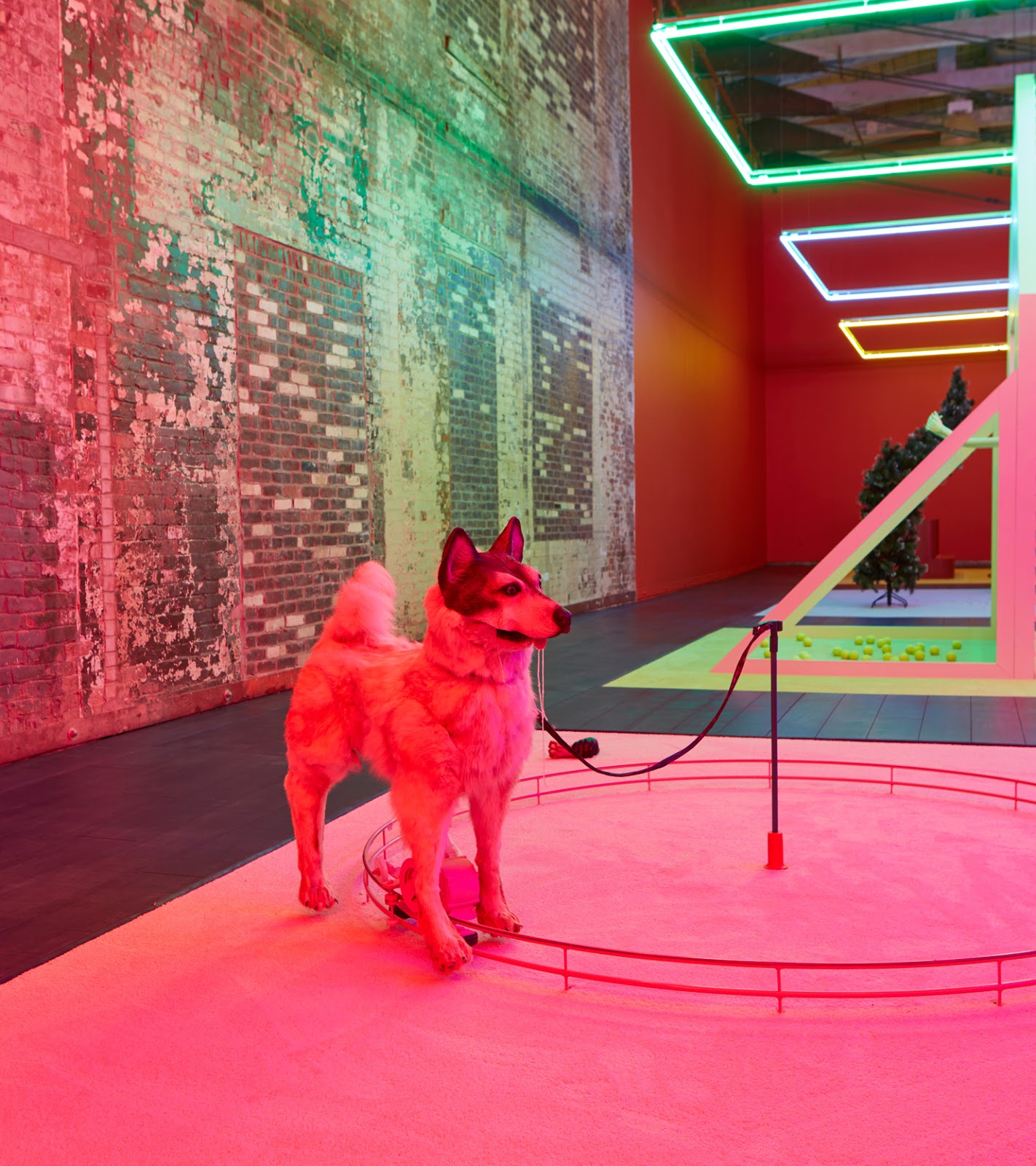 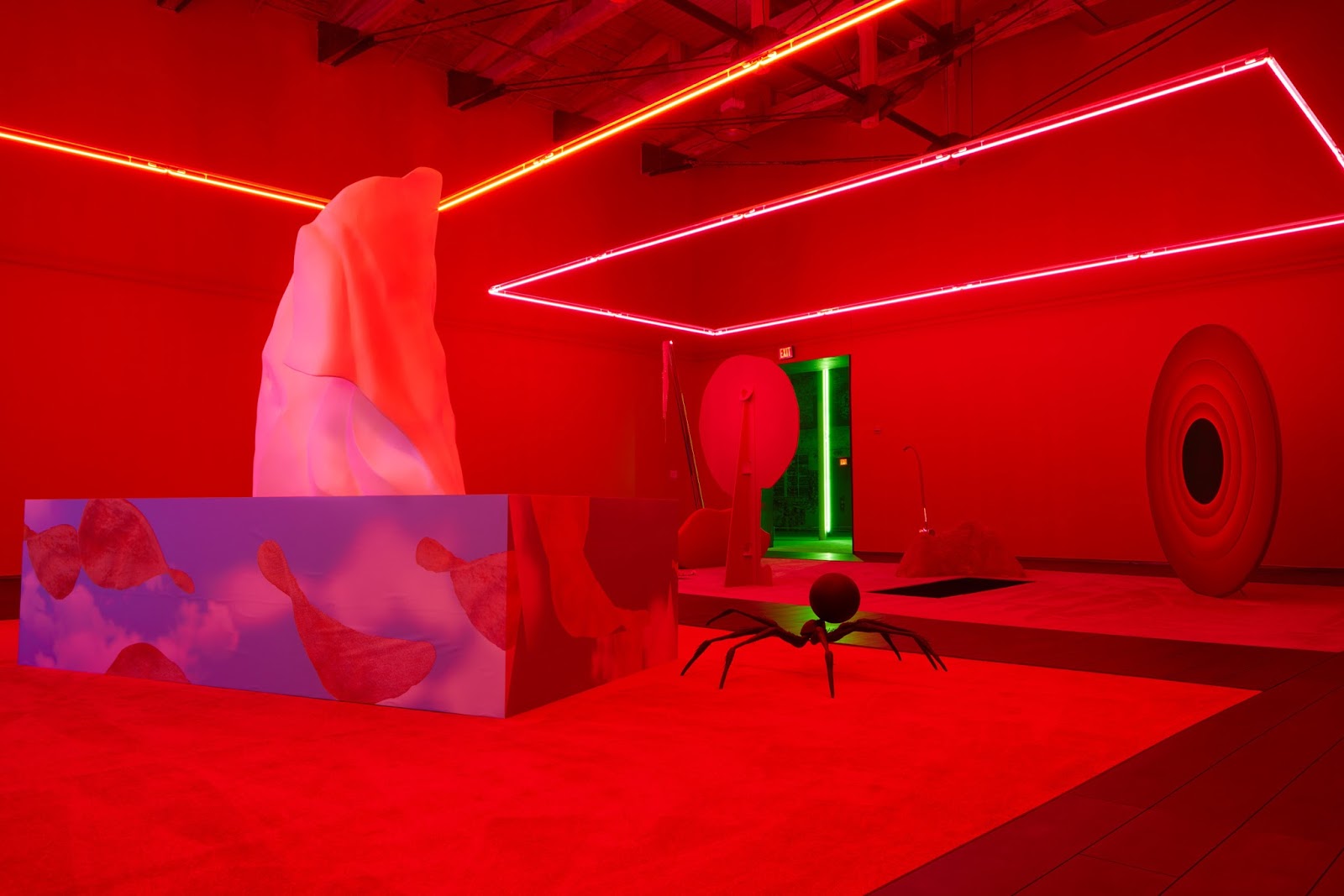 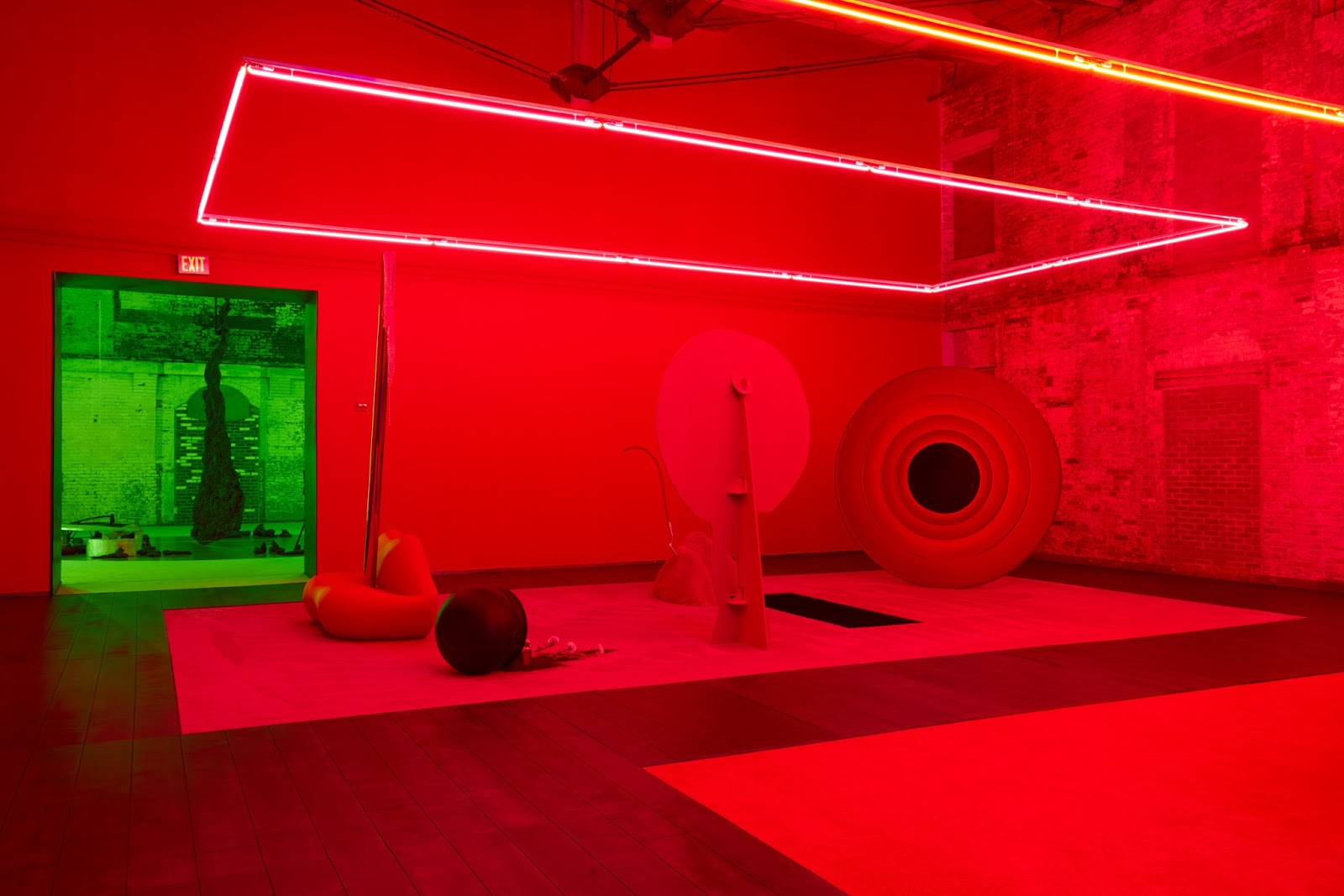 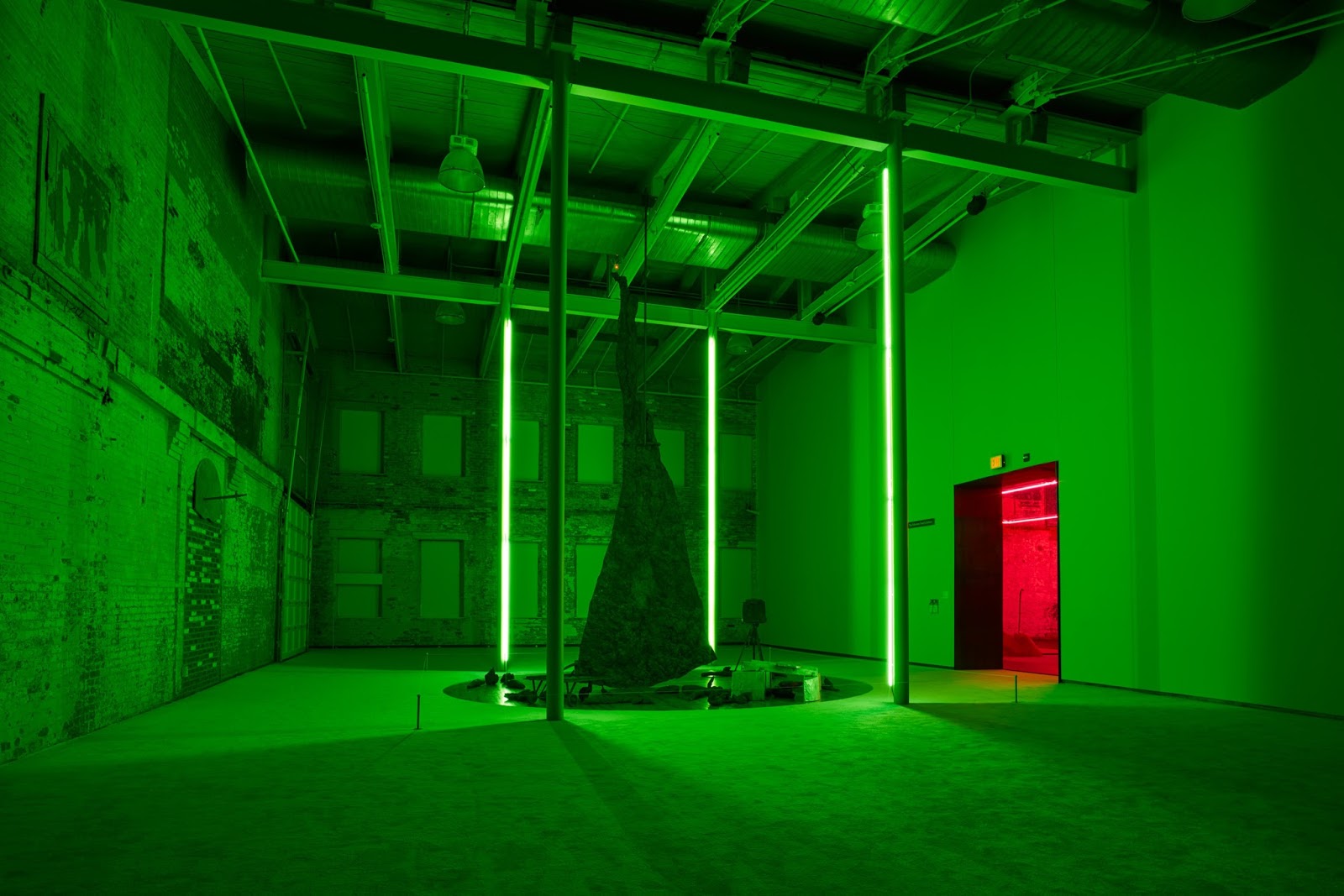 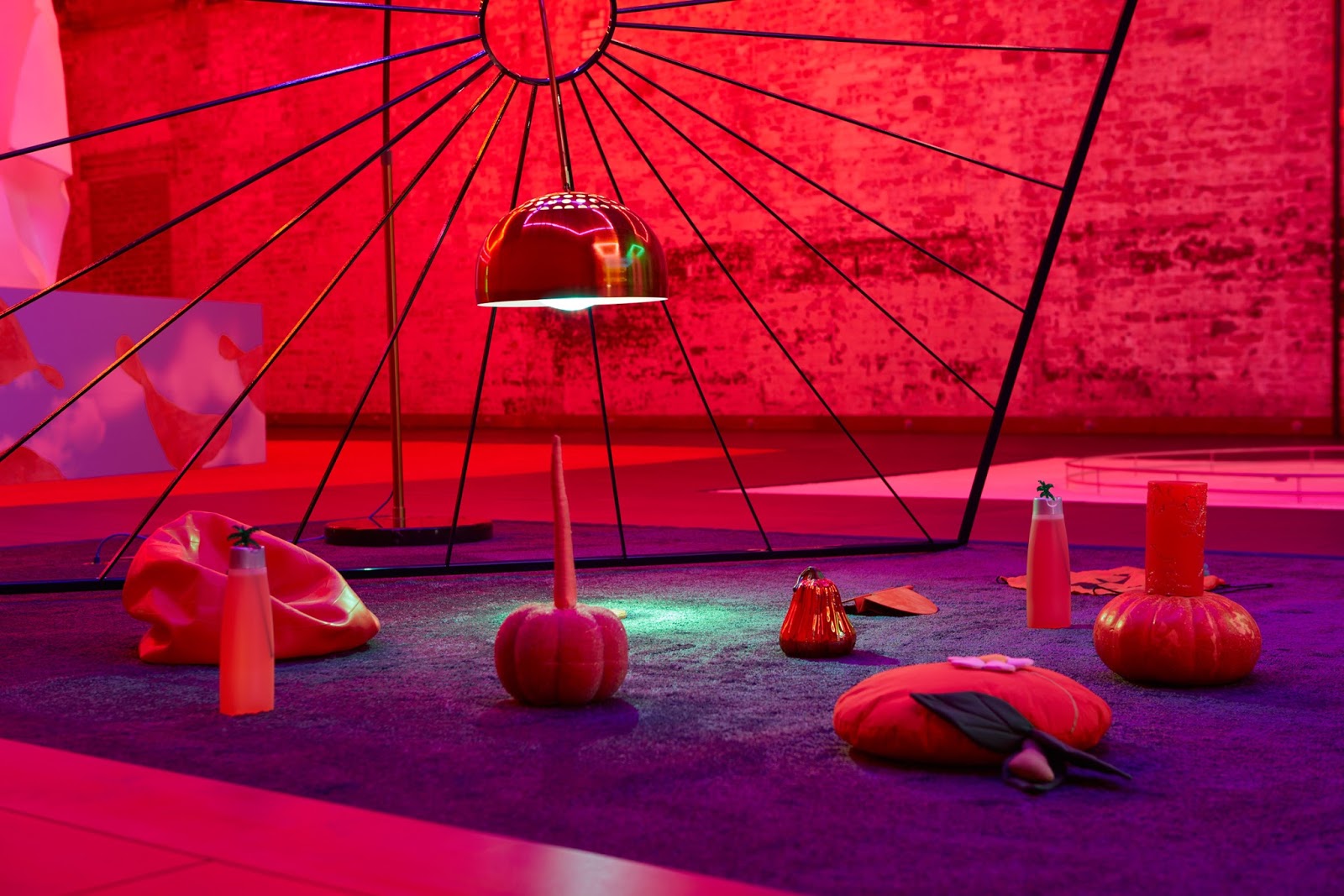 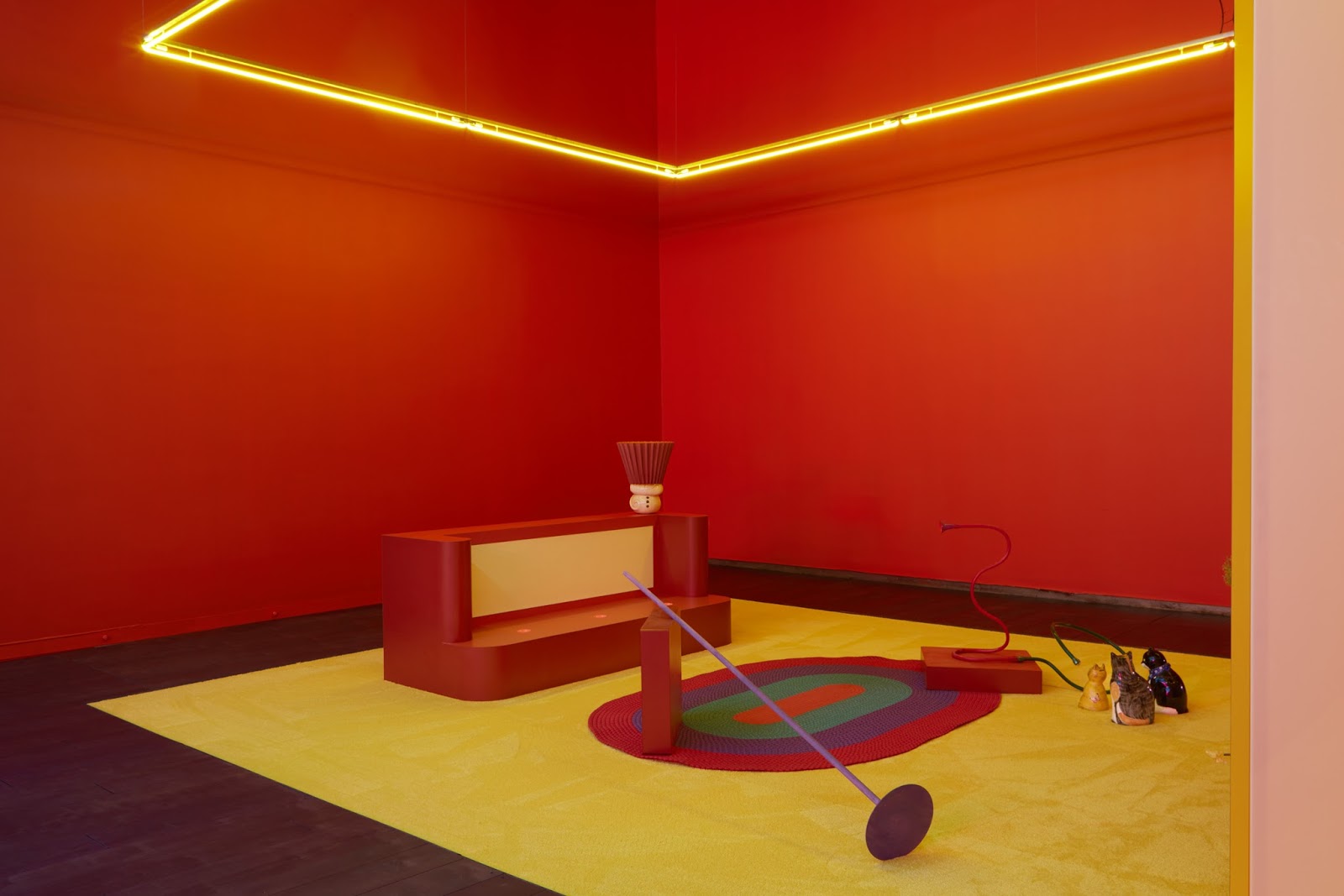 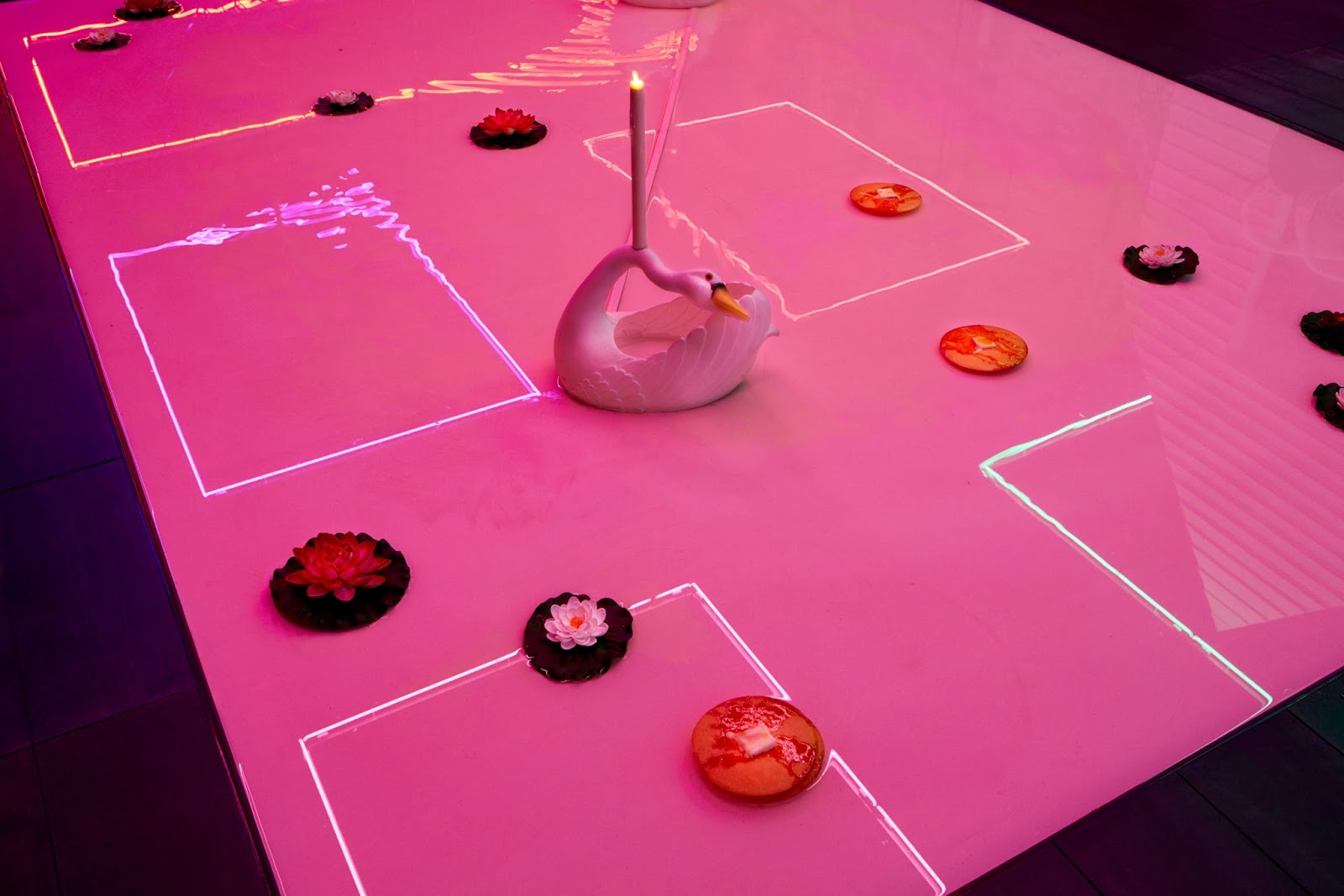 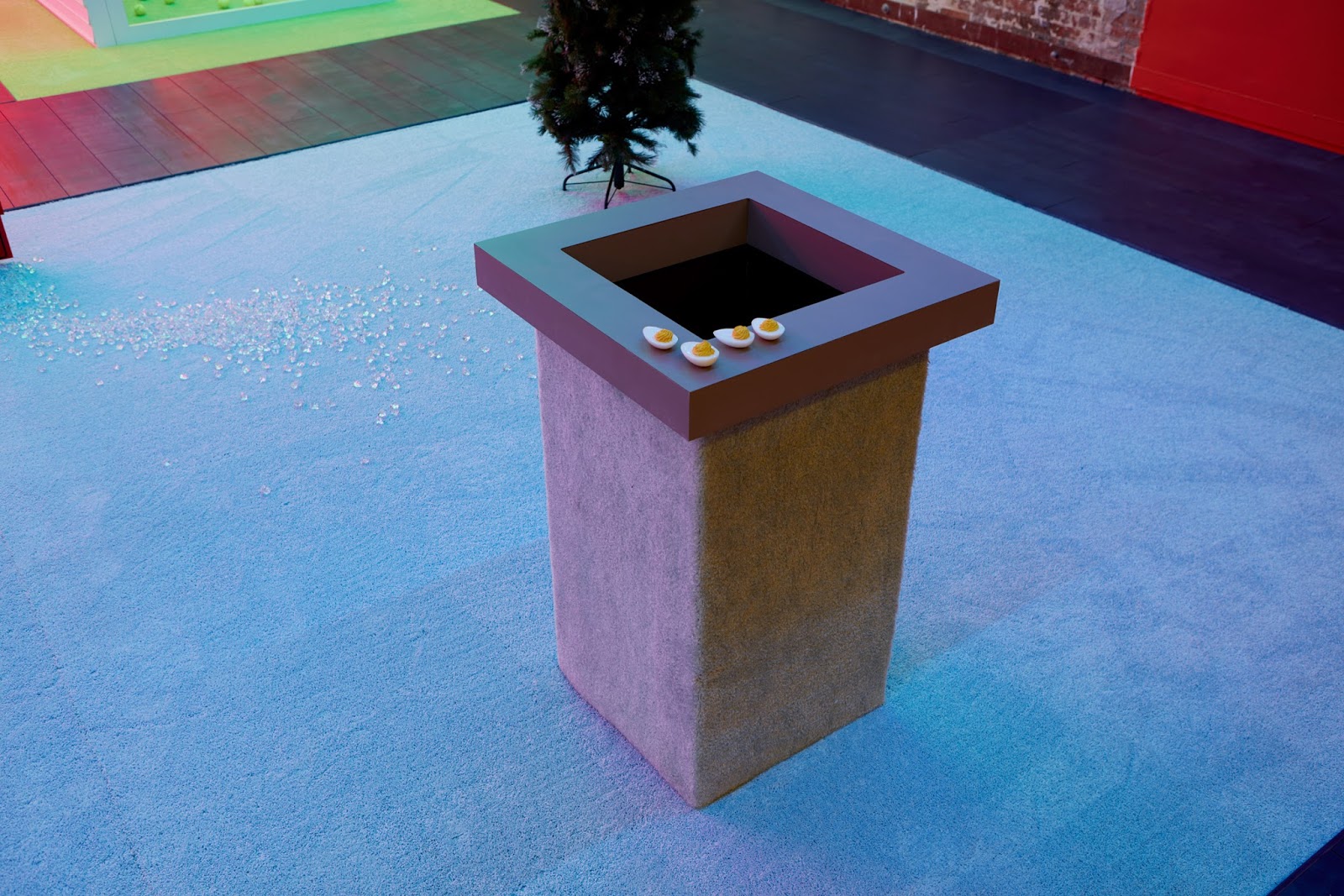 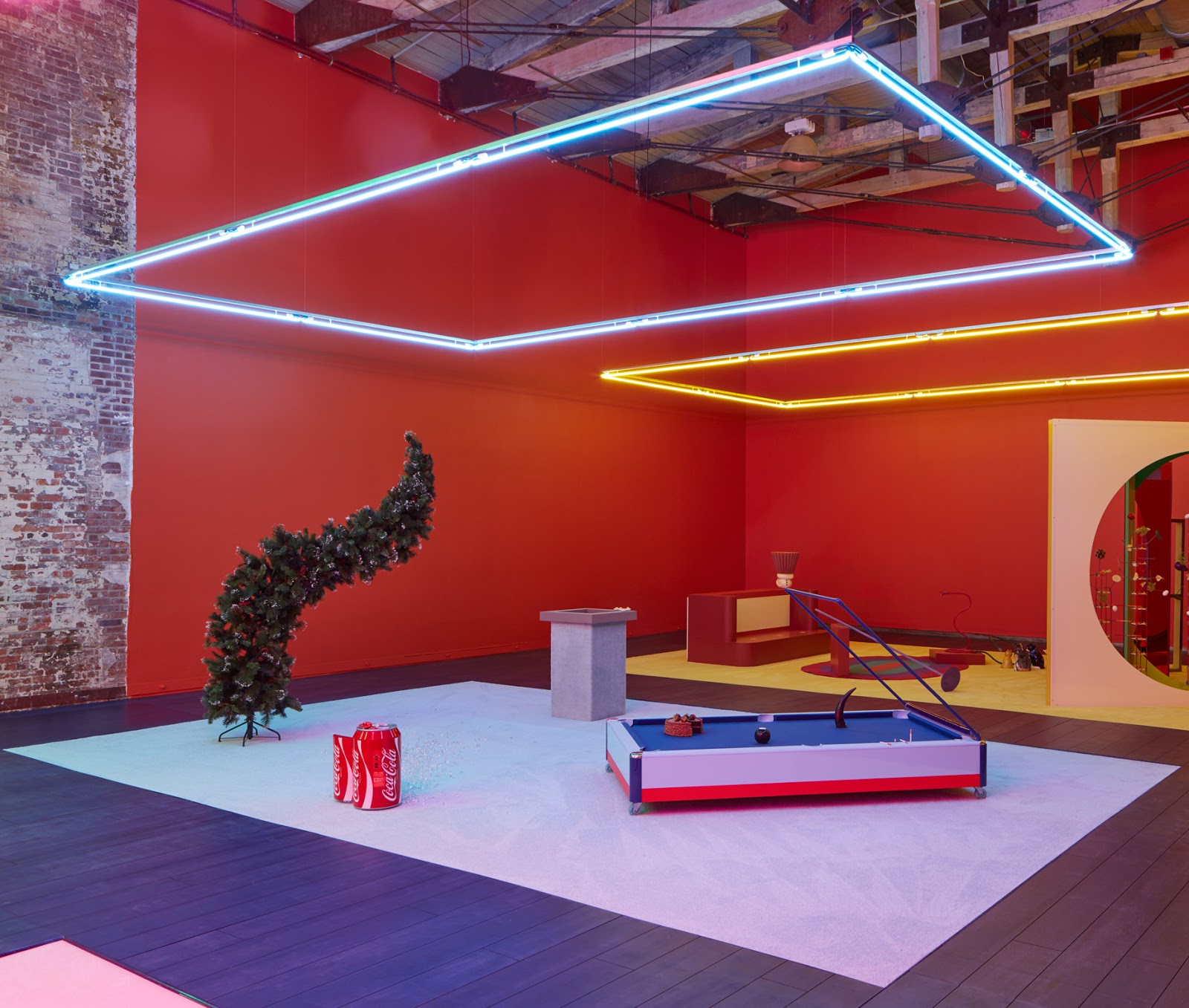 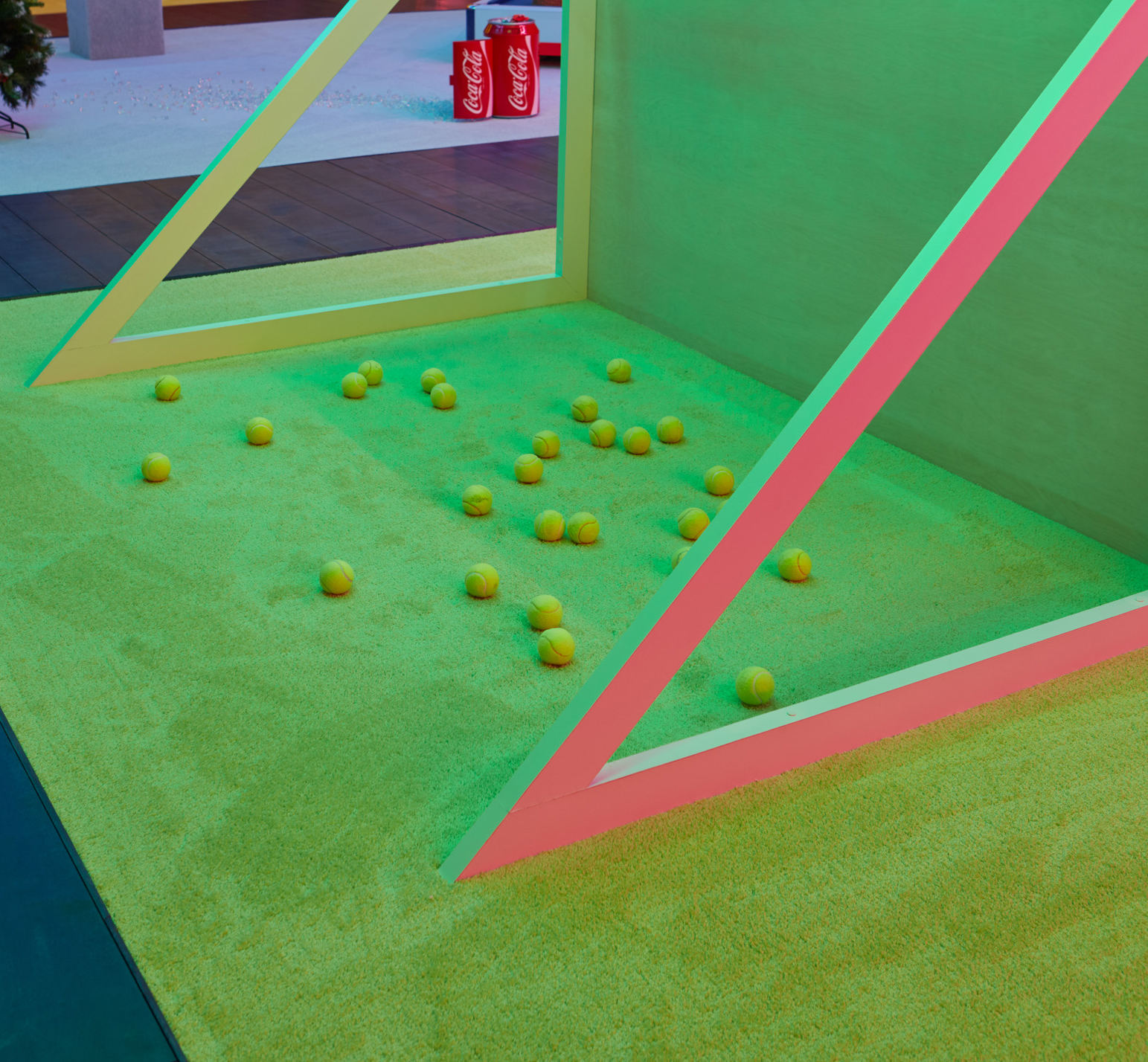 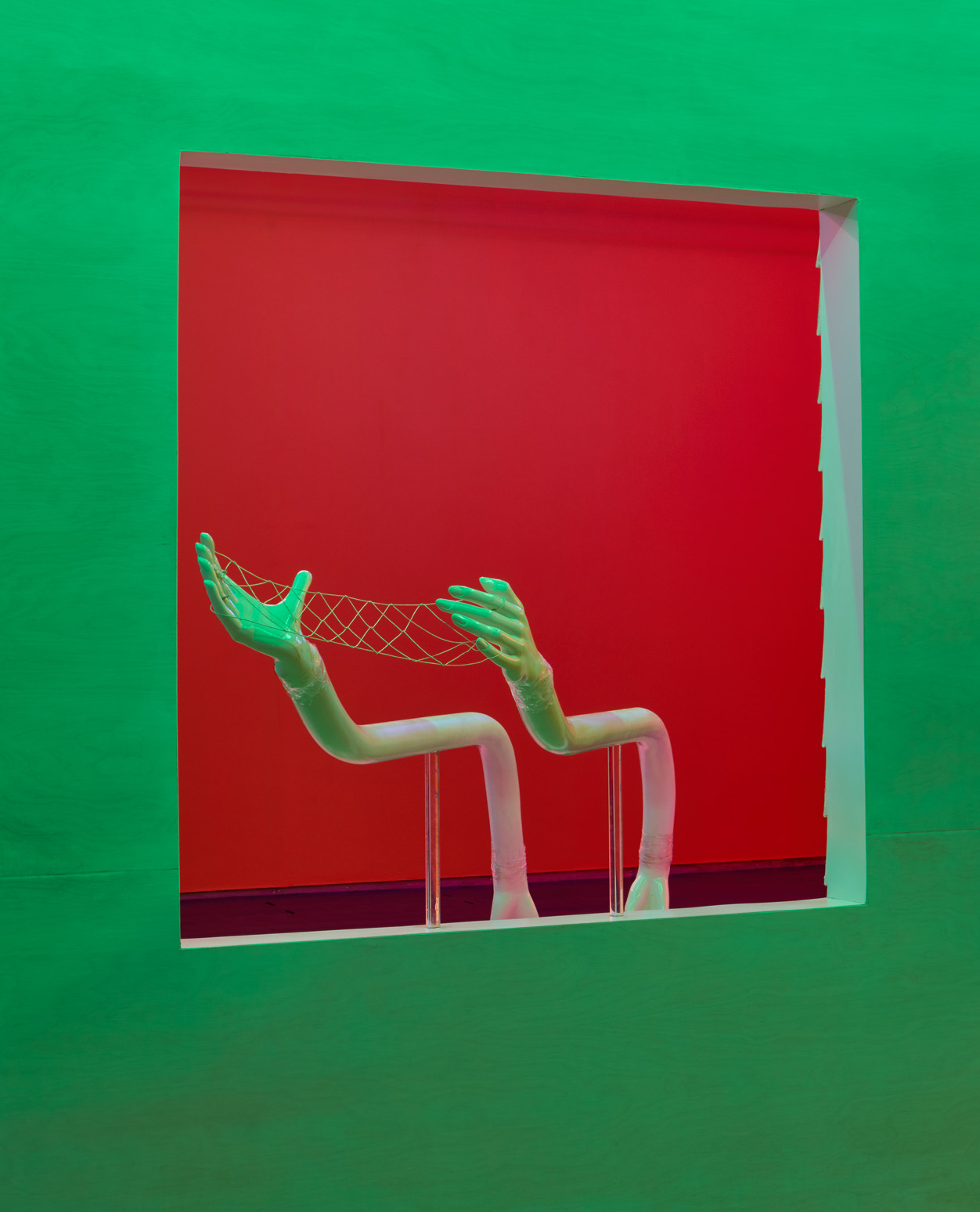 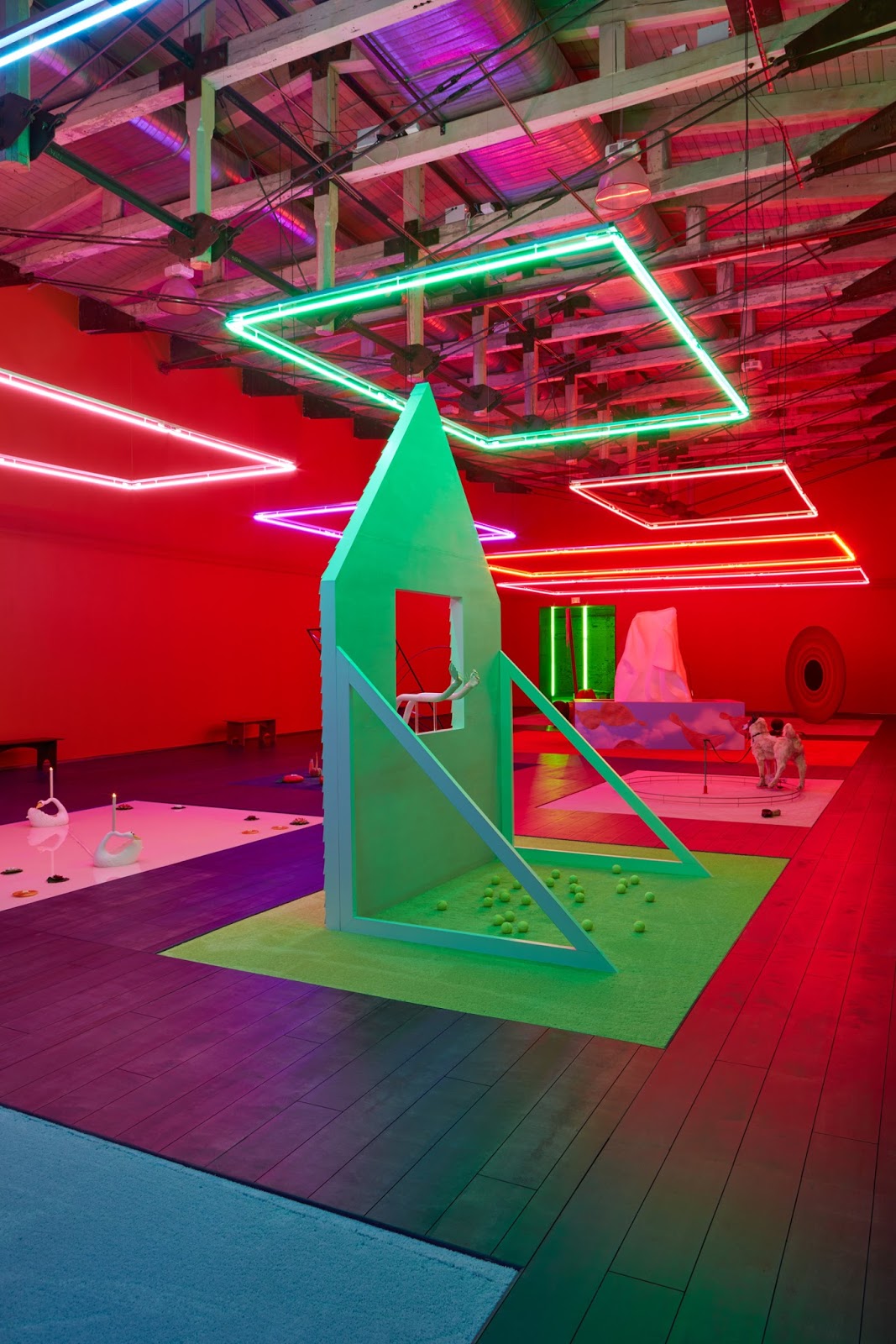 The centerpiece of the exhibition is a sprawling new ensemble created for the museum’s 100-foot long, 30-foot tall gallery. It is the artist’s sixth installment in a series of works based on Arthur Rimbaud’s poem A Season in Hell. The young 19th-century poet’s angst-ridden prose—about self-knowledge, work, and love—is mirrored in Da Corte’s references to his suburban upbringing, teenage desire, family relationships, love, and loss. Also on view are three videos inspired by A Season in Hell, along with a suite of table sculptures—a series originally developed from props used in the videos. Meticulous arrangements of items such as picture frames, plastic grapes, a Wiffle bat, and hair rollers placed atop a surface supported by sawhorses [Untitled (Buffet)], 2012, read like sophisticated time capsules. Like his predecessors Mike Kelley, Paul McCarthy, and Jim Shaw, Da Corte investigates the cultural and psychological narratives invested in the objects he manipulates.
Da Corte is particularly attracted to objects, which, in his words, “he doesn’t understand or doesn’t like.” He tries to strip his work of his own distaste to study how others find pleasure in the form, color, or composition of even the most mundane elements. Sensitive to the hopes and aspirations embodied in these items, he elevates them as entities worthy of our attention. All images are sexy in Da Corte’s work; he understands that “fantasy is present and available in all forms.”
The exhibition features two of Da Corte’s most important video works. The first is the seminalChelsea Hotel No. 2 (2010), named for Leonard Cohen’s song of the same title, which provides the soundtrack. The work can be understood as an index of Da Corte’s vocabulary of materials, colors, and processes. Two hands—variously covered in flour, dirt, aluminum foil, and packing tape—manipulate foodstuffs and objects, including bread slices, bananas, grapes, cherries, bologna, and lettuce, as well as a plastic grocery bag, broom, and IKEA chair. The video bursts with color featuring a bright orange bucket, a robin’s egg blue plastic bowl, and cherry-red soda. Ketchup, soda, and nail polish mimic both paint and bodily secretions. As a study and a performance of color, texture, movement, sound, smell, and desire, the video brings to mind a number of precedents including the performances of the Viennese Actionists, as well as Fischli/Weiss’ 1987 film celebrating the magic of making sculpture, The Way Things Go, and Richard Serra’s Verb Listfrom 1967–68 (Da Corte’s version might read “stacking bread,” “shaking soda,” and “squeezing ketchup”).
Da Corte’s groundbreaking video installation Easternsports (2014)—made in collaboration with artist Jayson Musson for the ICA Philadelphia—is a dazzling, eccentric four-channel video, installed “in-the-round” on four large, free-standing walls surrounded by colorful carpet tile and linoleum designed by the artist. The work envelops viewers in the vibrant, surreal, visually ordered, but psychologically messy world familiar to Da Corte’s work. The 3-hour kaleidoscopic video-cum-telenovela, with a poetic script by Musson and music by Dev Hynes, is inspired by the Thornton Wilder play Our Town. That minimal classic is re-imagined with brightly colored and patterned sets, shiny props, enigmatic characters, and references to the likes of Don Quixote, David Lynch, Sol LeWitt, Edna Andrade, and Ja Rule. In Easternsports, the products and objects of Da Corte’s sculptural and installation work become the props through which the video’s archetypal protagonists—often dressed in pared-down costumes of body-hugging tights—“perform,” in the artist’s words, “their desired lifestyles.”
Da Corte has long been interested in sets and stages—be it a television set, music video, opera, or cartoon, or more invisible kinds of stages and special effects, such as the cardboard shelf holding a stack of AXE body wash in the corner store. He explores the notion that artifice is everywhere, while examining the masks and props we use to create meaning in our lives, and also to deceive ourselves.