as dreamt by Guido Santandrea 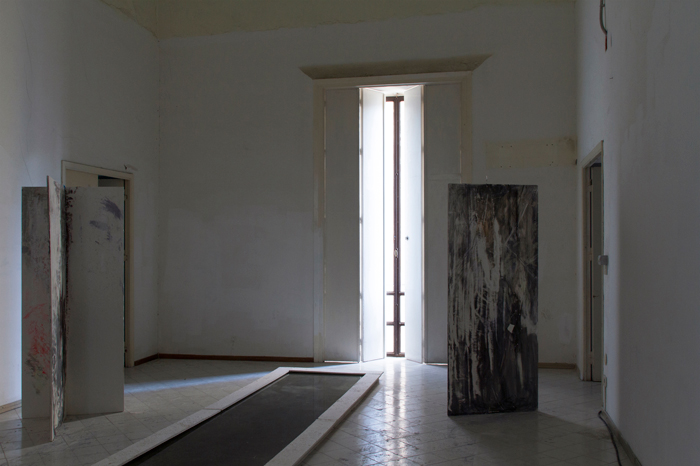 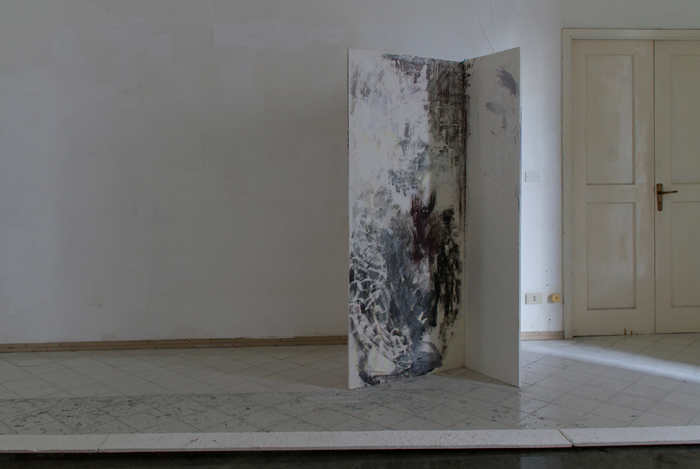 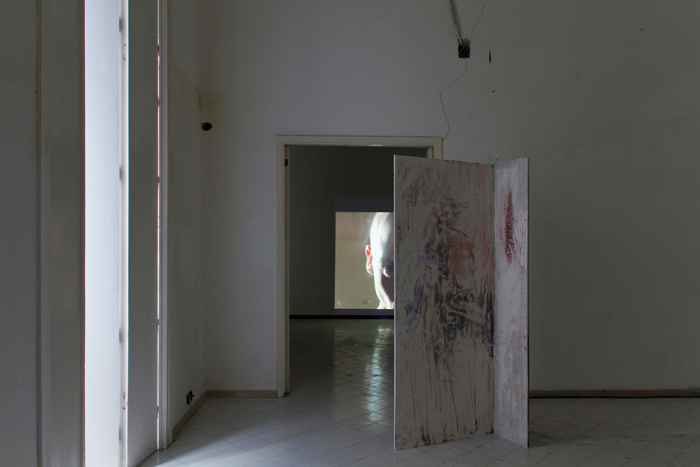 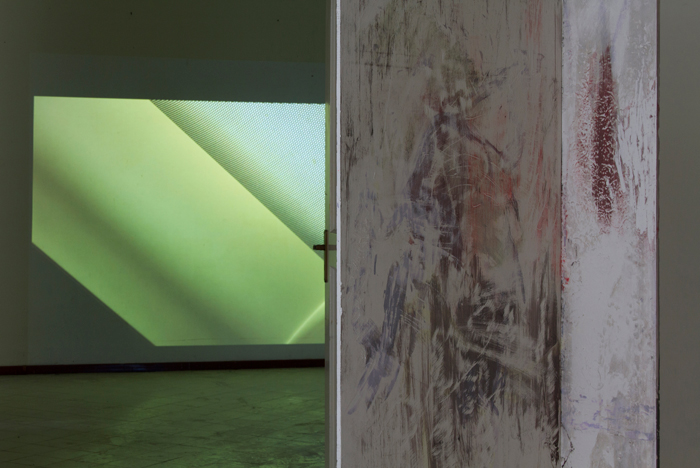 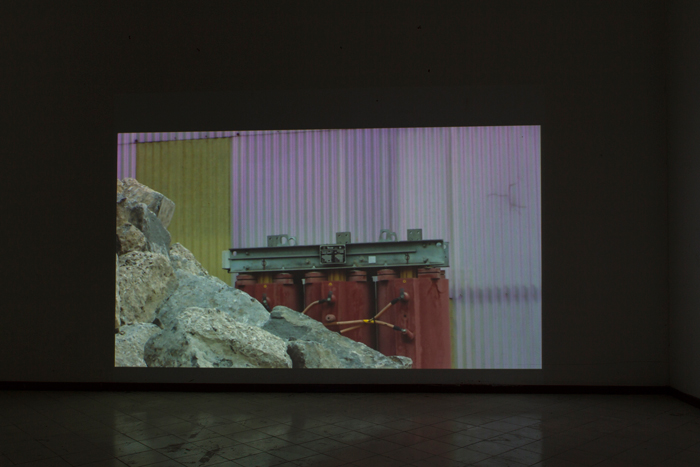 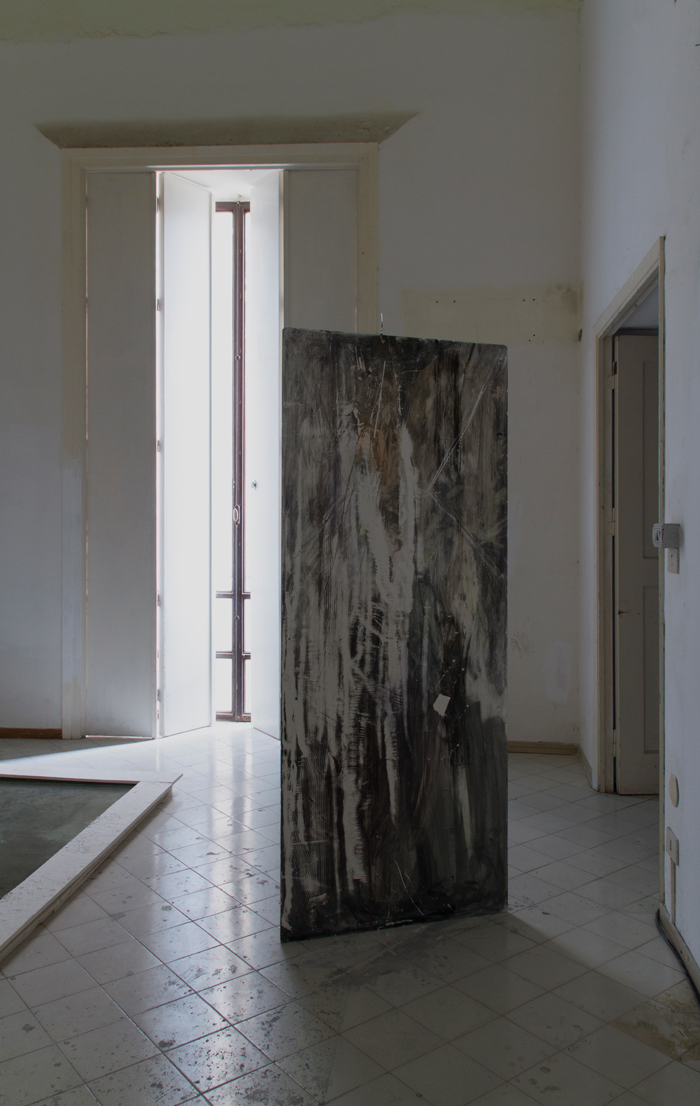 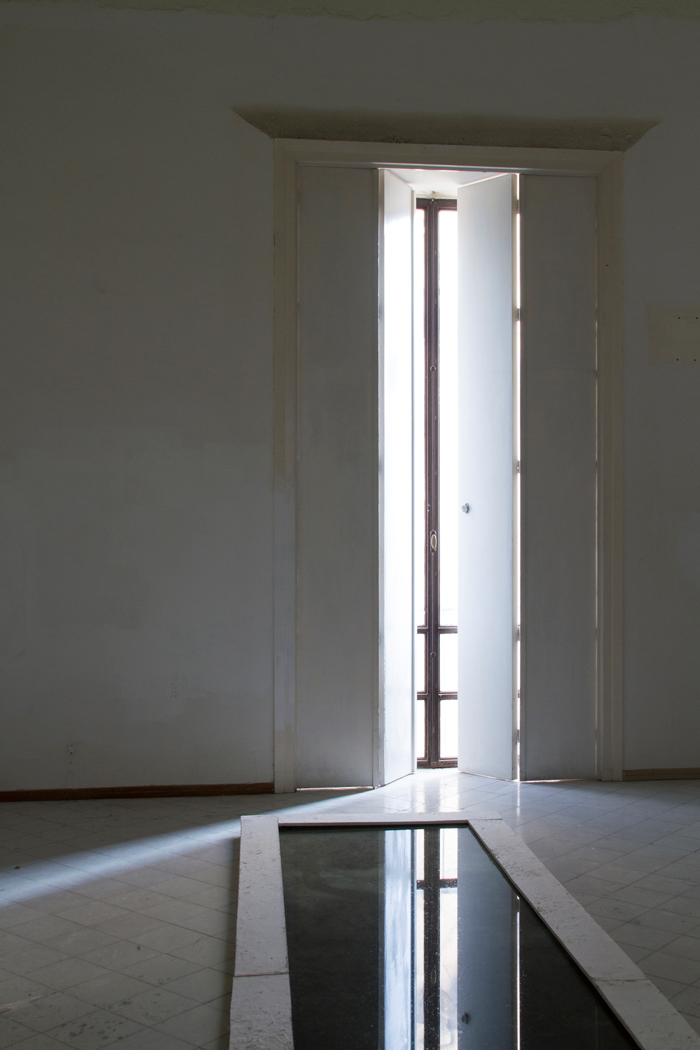 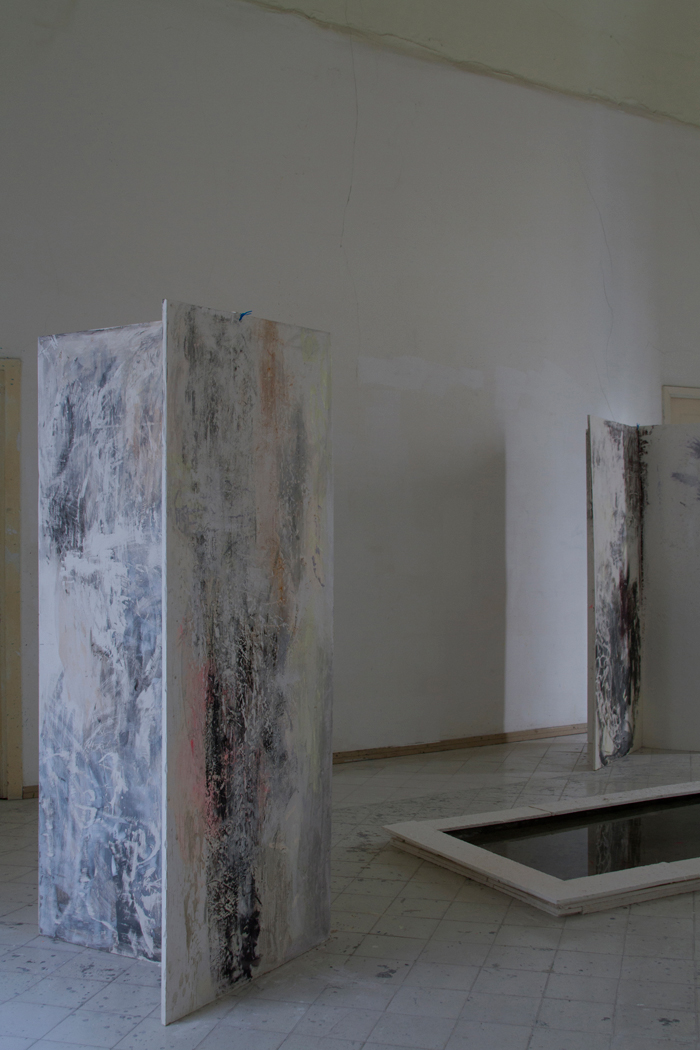 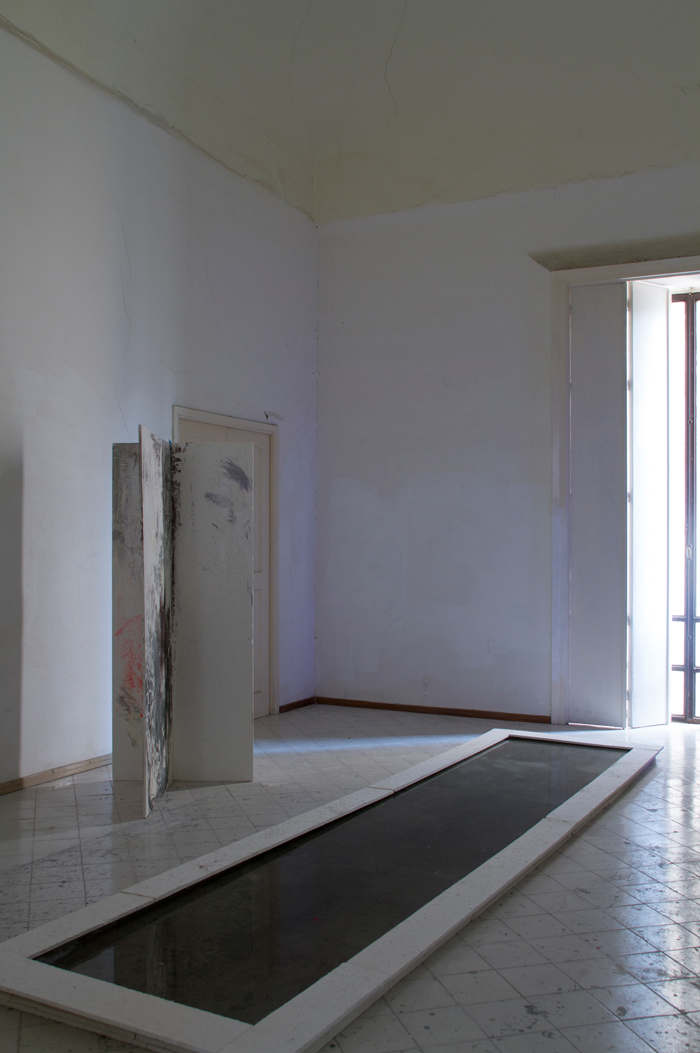 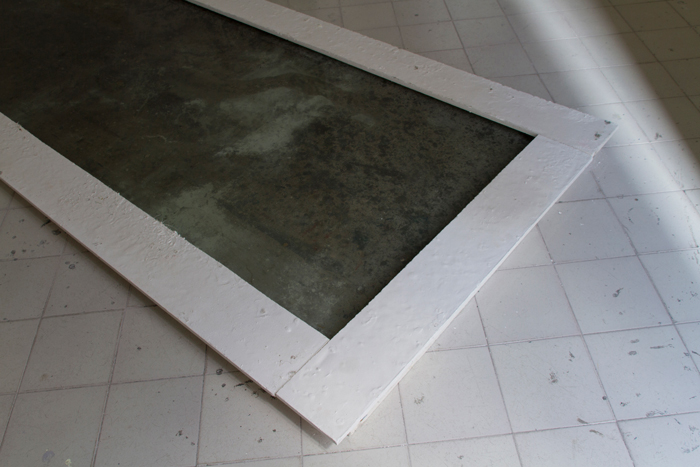 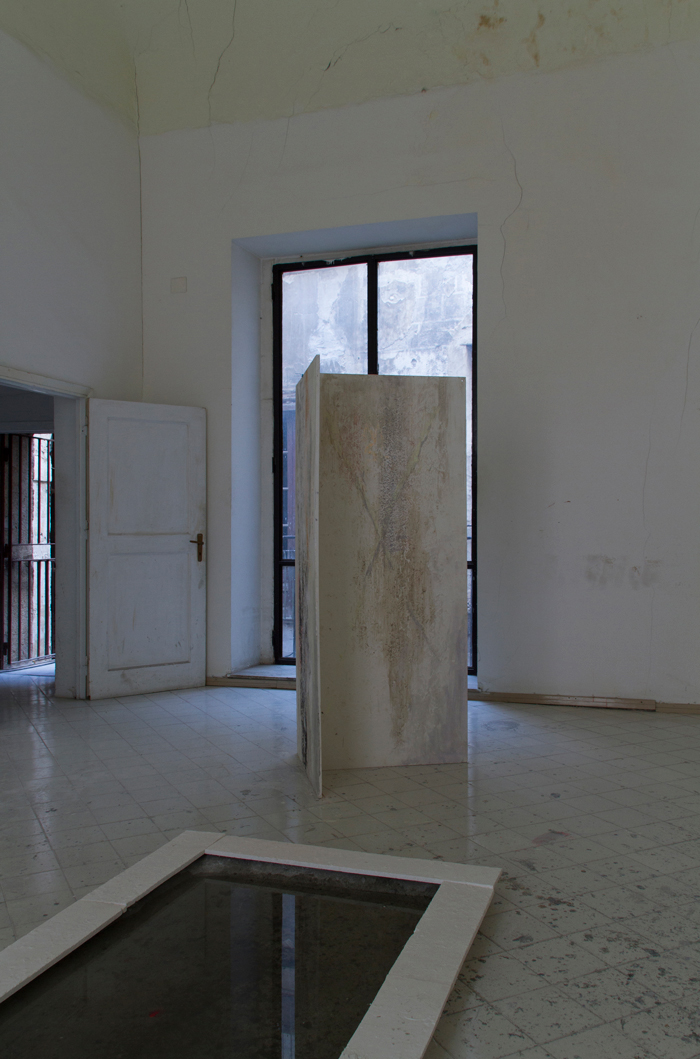 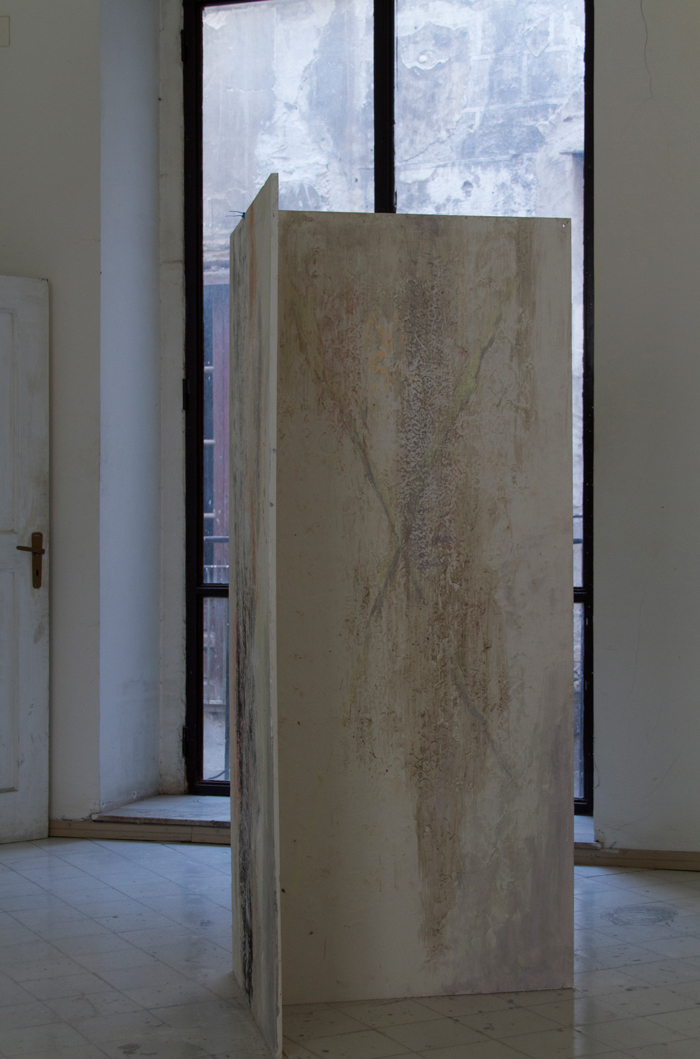 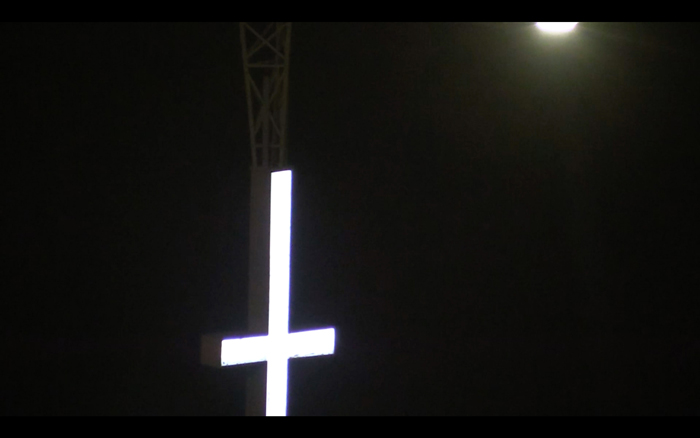 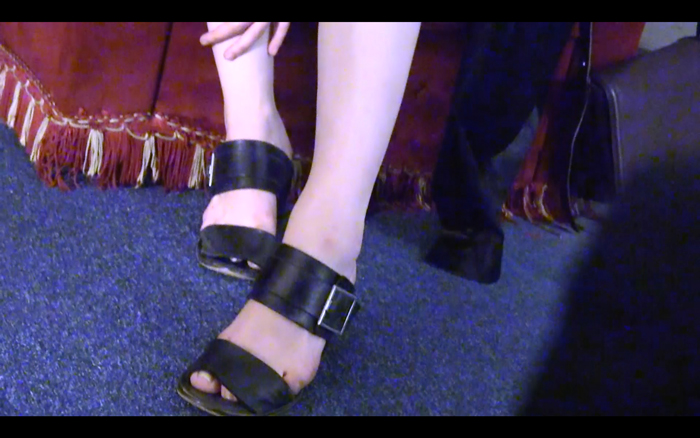 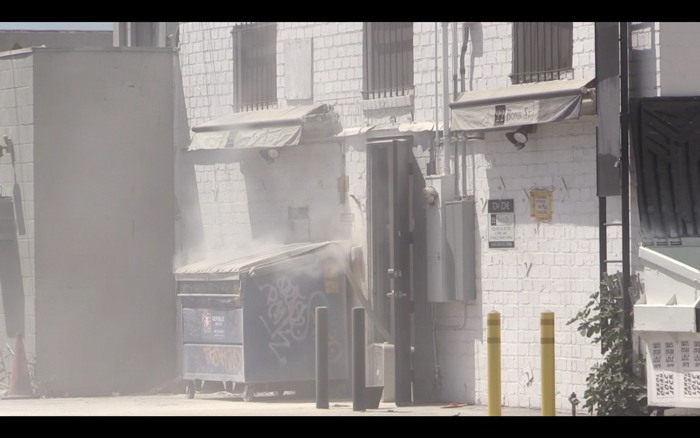 Exporting Marsi Rex is a collaboration between Stefania Batoeva and Isaac Lythgoe. There is a simple precis; how malleable is an identity, how easily co-opted, how readily relinquished? The project is based on a dream by Guido Santandrea and is with special thanks to the contributions and vandalisms of, Rupert Smyth (YYAA recordings), Goran Chanter, Gianluca Concialdi, Antoine Donzeaud, Bianca Bondi and Marsida Rexhepaj. Presented is a narrative, an immersive installation in plaster, plastic and water and an 8’32” single channel video projection.
The installation was constructed at a non-gallery location in Palermo, Italy over the month of July and was open to the public for one night.

For the time being we’re just doing this or that. It is not yet what we really wanted, and there is always the fantasy that sometime in the future the real thing will come about....

When we were insular children we’d lie back on the grass and drift off on chemtrails, we’d explode planes at intersections. The zero consequence of youth - the one thing we dreaded throughout was to become that type of creature to be bound to anything whatsoever.

Today we decided to steal someones identity. It floated across our eyes and just settled. A moth in a dark woollen coat.

The flight today was silly. Queues of holiday goers quoting air hostesses. We counted our journeys for the year, stared at bad tattoos and ziplock bags. Squeezed off the old loved silver, and, hummed.

We’ll arrive in the hot night, last week our taxi bullied its way down the motorway. Cracked windscreen and no seat belts. We often think there’ll be a final trip. But maybe not. The anxieties brought up by a setting sun, transitioned into a kinda cheap fade-out. Like the guys who can’t finish their songs. Most people die in the early morning.

We had to steal Marsi Rex. We filmed her two nights ago, she sat relinquishing rebellion. We scouted the scout.Today we need more. A theft, a heist, an export. We’re tired of reflections just now, outright bored of our own. That only we love the only-we. That only we need the only-we. We’ll run with her down the continent. As far as we can get, data trails in the wind.
\\
It takes years to change one’s habits, one’s character - 3 in fact we heard. Well we don’t have time for that, time is money, but also money is money. This is a heist, an unashamed dash, scooters into the jewellery store, King’s Rd abandon. To crystallise such a moment.

We’re chasing a purity, the tactility of first contact, the preservation of a fervour preserved only in the seconds before skins touch. We’re chasing the clawed hand drooped over the sofa, the screwed royal, the stripped, fucked and tossed aside. Those battled, buckled feet. We’re pressing after the last living, preserving ambition less life, less life unbothered by distraction. The life focussed solely on the passing to the end of times.

Our mother called today. Grandfather died in April, some years now since our Grandmother. The house and things and family exist now as a semi-autonomous state. An itinerary with a voice and despair in equal measure. Nothing will sell anymore. But from the clutter fallen colonial pasts stutter into mind. No one wants the tusk but us, the carved hilt the spit yellowed mouthpiece for the horn and the bedraggled thong of leather. A fallen beast and a magical end to days.

We don’t care about things today. It’s a relief. We’ve let go of all our actions, unburdened ourselves of all but the most basic brands. We’ll get the most out of becoming Marsi Rex. Guess that was the heist, to not make something about ourselves anymore - to supplant ourself.

The stupidity of everyone who got what they wanted and chose to stay unremarkable.

Guido Santandrea born 1989, Bologna, IT, is a London based curator, founder and director of Almanac London/Turin, and and is currently a PhD candidate at the department of Visual Cultures at Goldsmiths University, London.