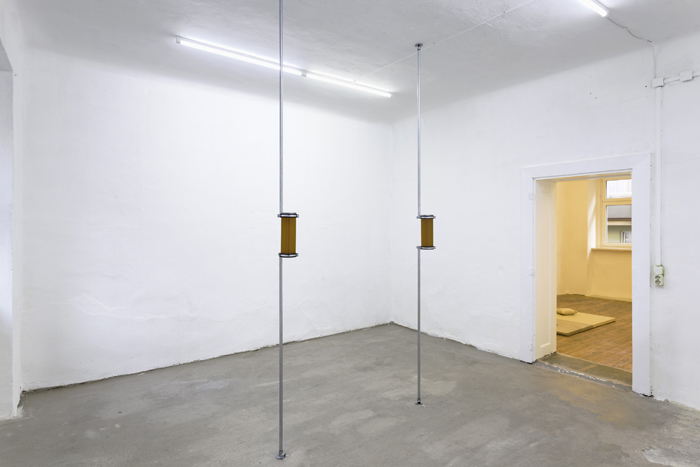 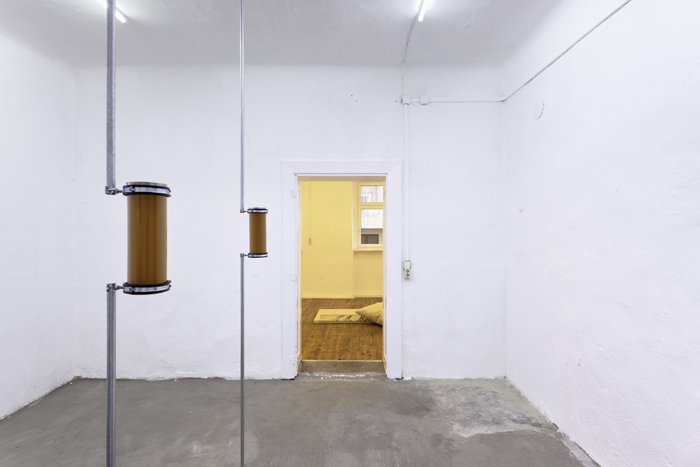 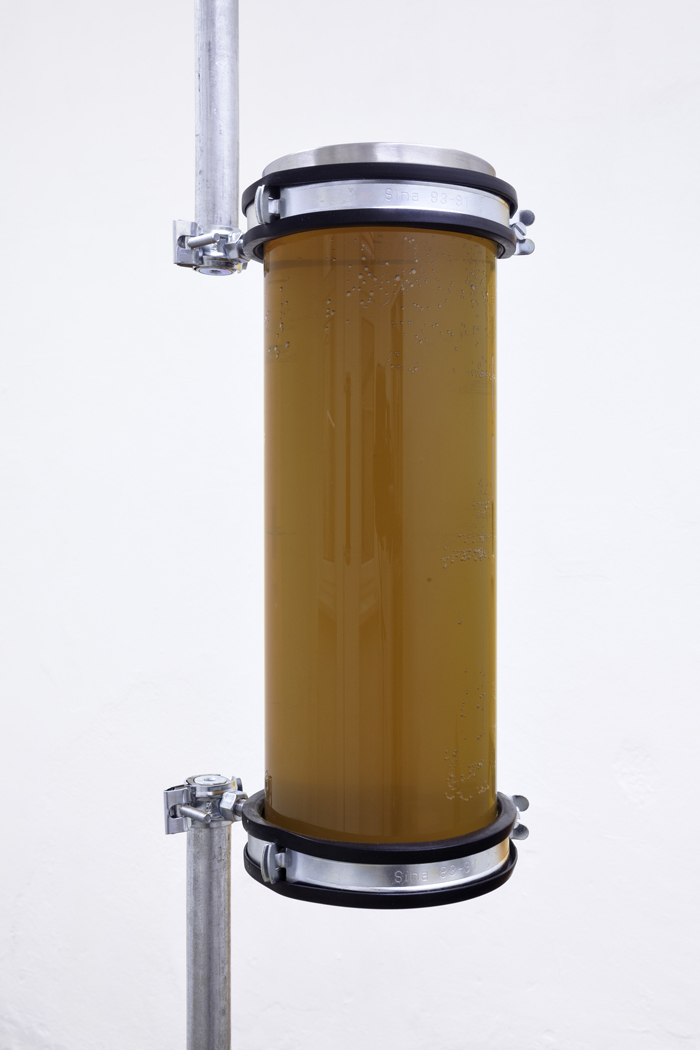 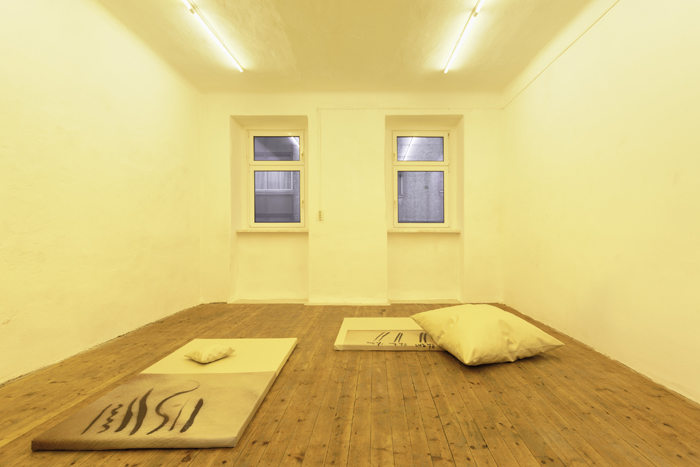 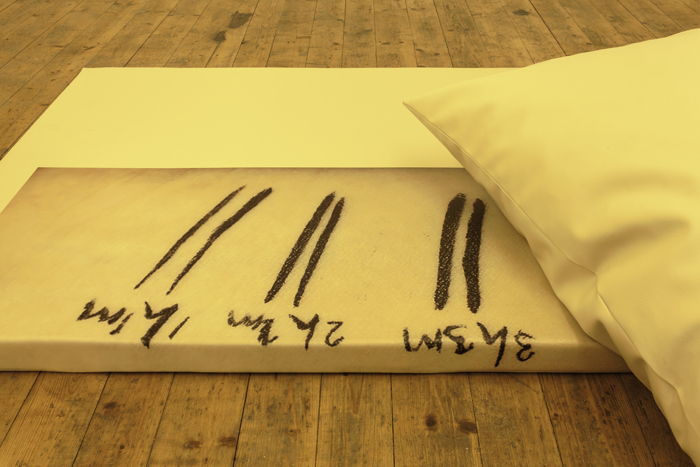 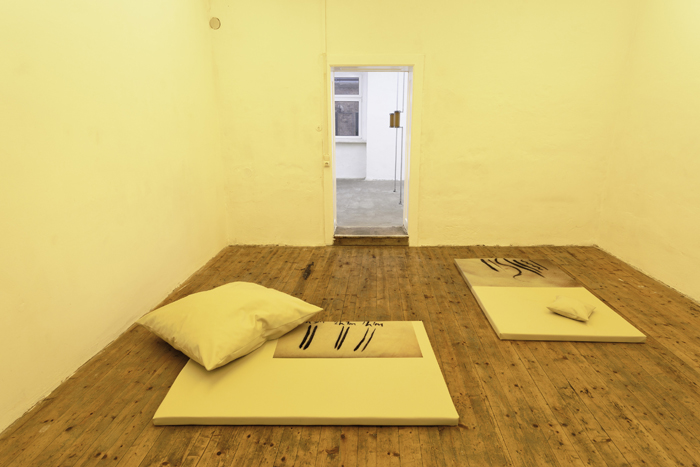 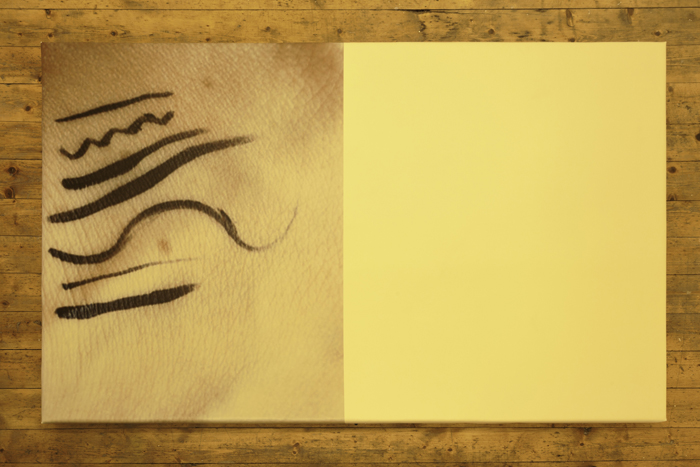 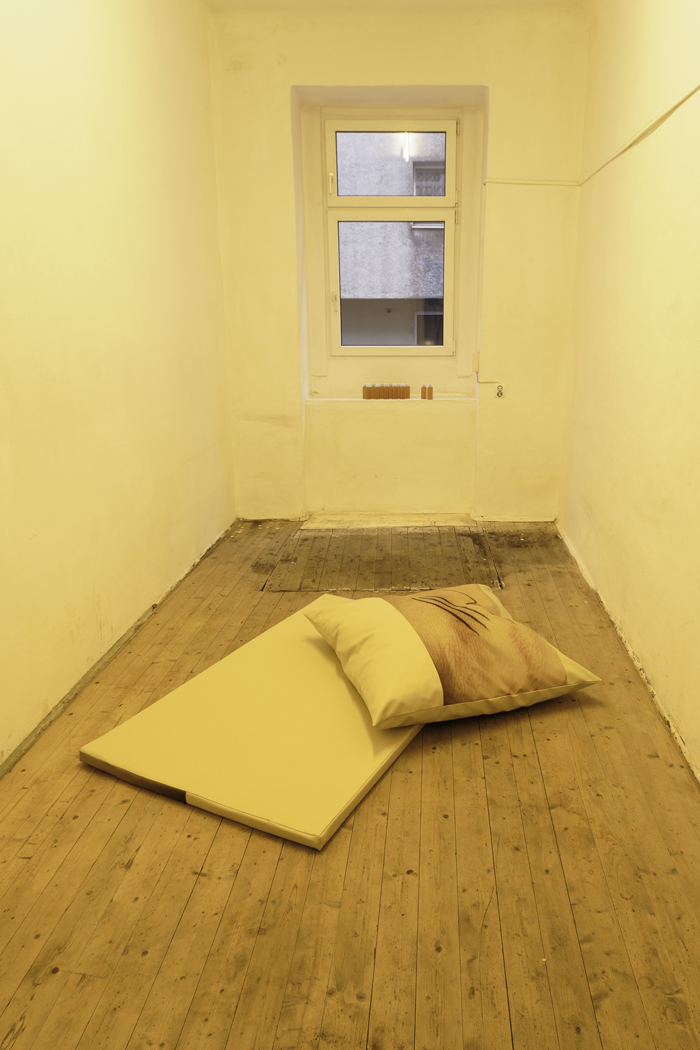 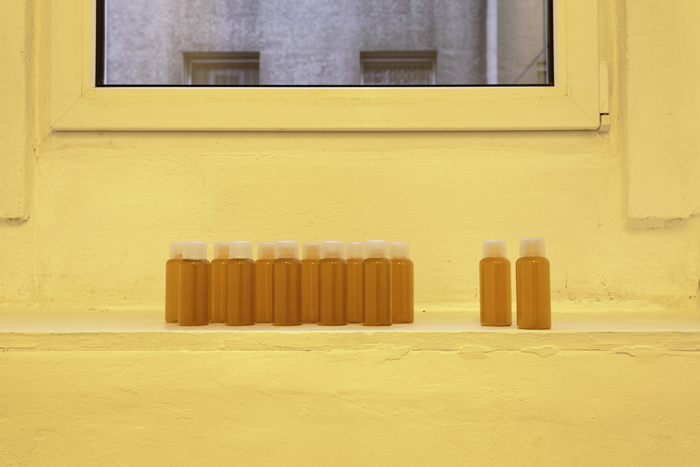 
What does it feel like to be alive in that room right now? – Samantha asks Theodor curiously. What is it like to be breathing, feeling, seeing, touching like he does, she wonders.

At Kevin Space, Marina Sula has staged a conflicting dramaturgy that explores the nature of love and desire, and the interfaces and processes on and through which these come into existence within increasingly complex layered networks and adaptations of human and technological tissues.

Occupying the first room beaming with harsh white-blue light, in distant coldness two iden-tical industrially sleek metal constructions of I just want to feel you in my arms and share a little of that human touch fill the height of the space and hold a rosé-beige liquid in mounted glass vessels. This magical elixir containing – amongst other ingredients – cinnamon, jas-mine, grapefruit and rose leaves, is a mythical mixture that is said to bewitch the desired one to fall in love upon the first sip with the one who handed the warm blooded tincture.

Spread on the floor of the other two rooms, imbrued in a flattering and soft light of gold pale amber filters usually used in porn industry to evoke a flawless skin, foamy mats and pillows want to be touched and felt in full body contact. Covered in synthetic leather surfaces, these shapes mold according to and are activated by the pressure of the human body, sinking in and breathing, in the intimacy of touching skins. A female voice filling the room with confessions of solitude in the face of the seeming impossibility of being a body taints this hyper-sensual spatial experience in a stage of piercing longing in which oneself is to become protagonist.

As the seeming disembodied and ephemeral is claiming its space, and the warm voice is fading into noise of machinic algorithms, Sula is provoking an experimental setting that allows for subject positions and their terms of experiencing world to collide (Who is alive, in what way?) In a laboratory of sorts, romantic desire conflicts the brutality of genetic en-gineering or deep learning programmes that shape and design perception and affects of the increasingly alienated prosumer as much as of the machinic other operational system.

As posthuman nightmare or a possibility of a true romance of organic and inorganic such as described in the powerful cyborg figure after Donna Haraway, the all too feminine seduction and brutality enforced in Sula’s installation. What is it like to be alive in that room right now aims to disrupt the internalization and naturalization of everyday interactions in accelerated and synthesized environments and underlying powers to allow for a space to reflect on the shifting understanding of human nature and with it the nature of love.
Tags Lazy exhibitions
Newer Post Older Post Home