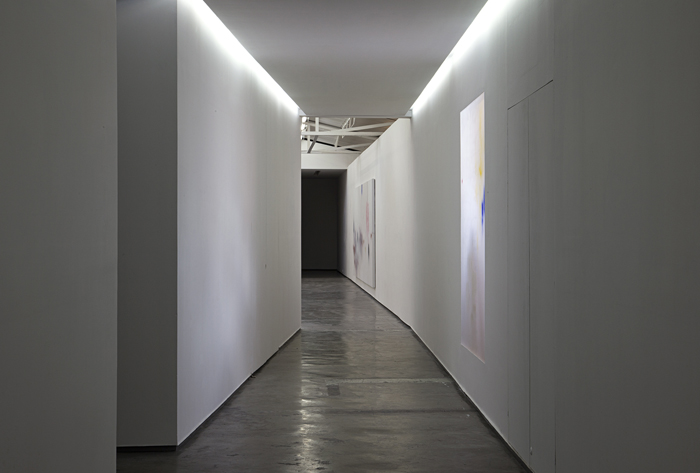 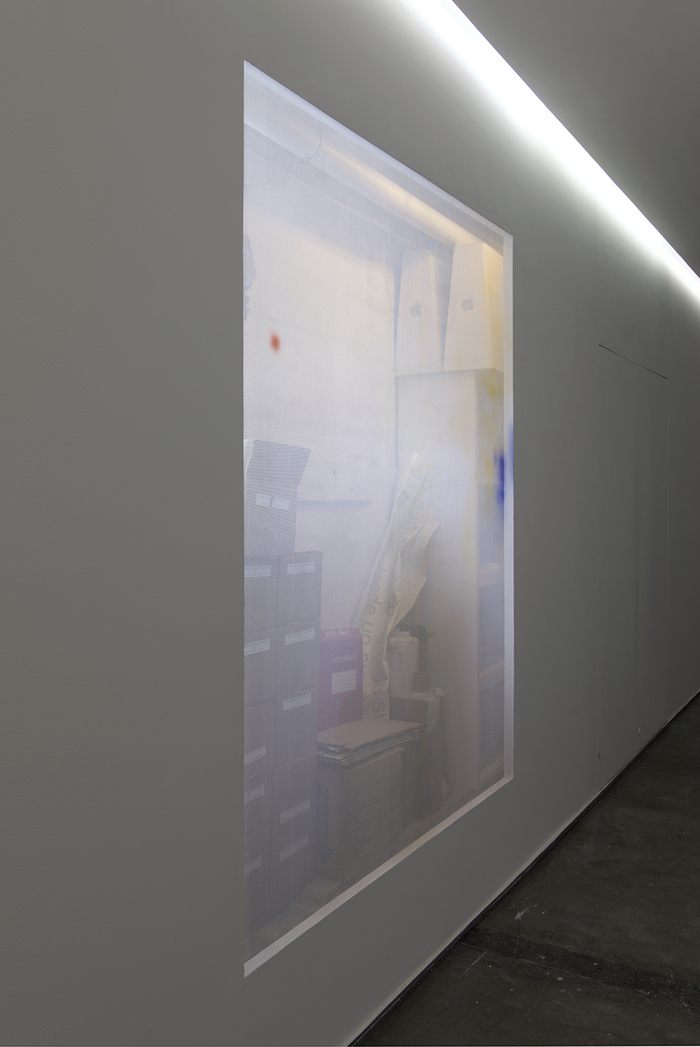 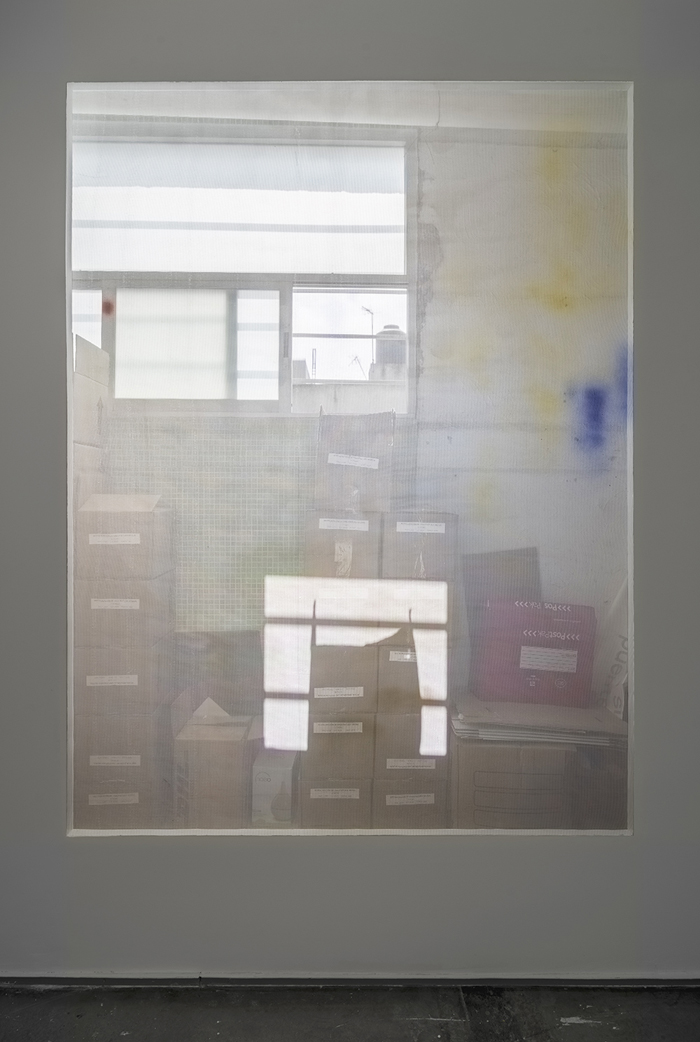 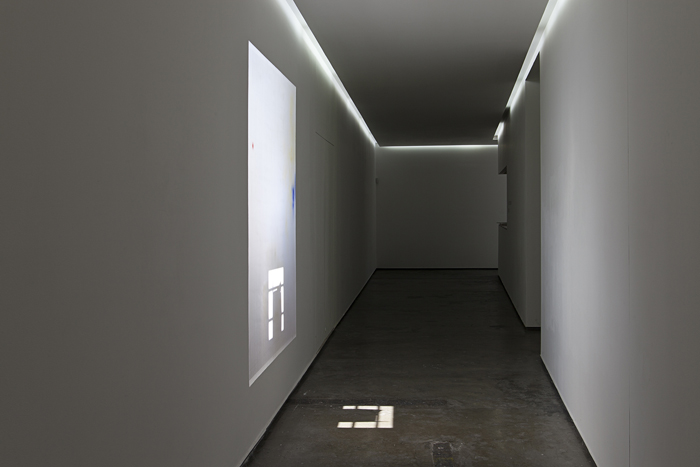 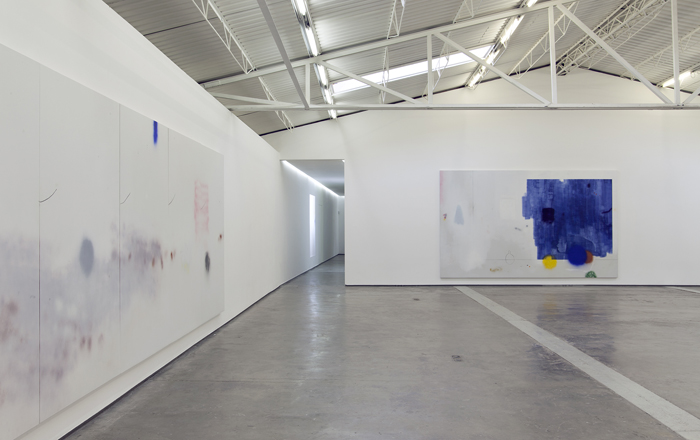 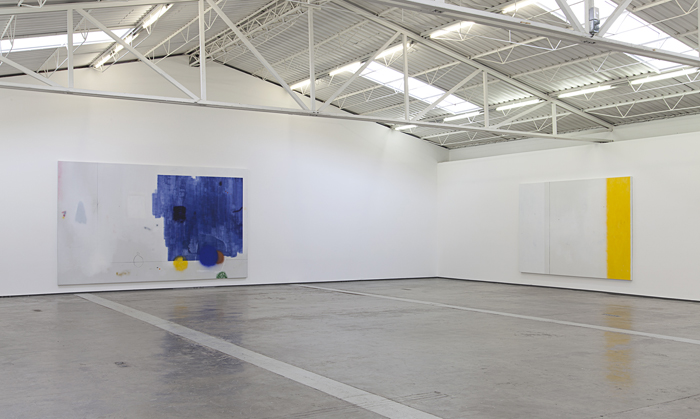 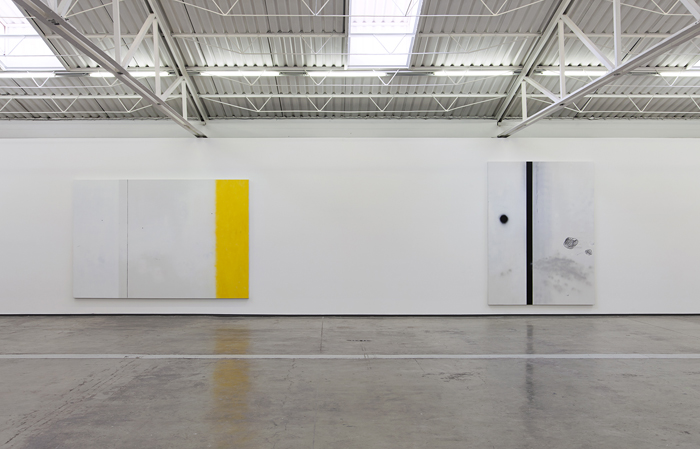 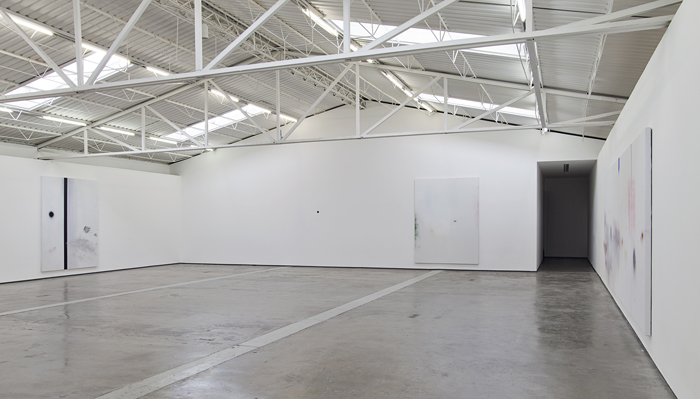 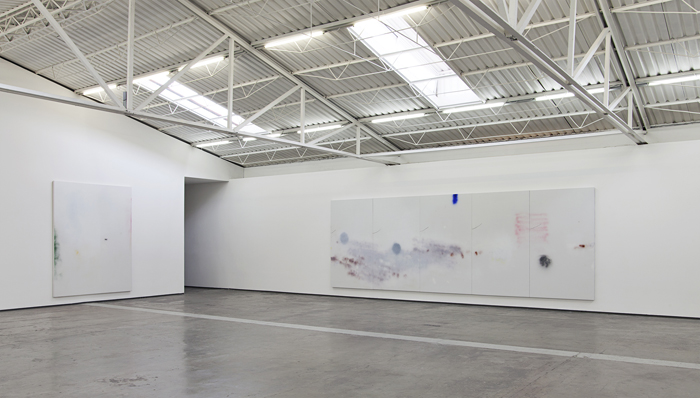 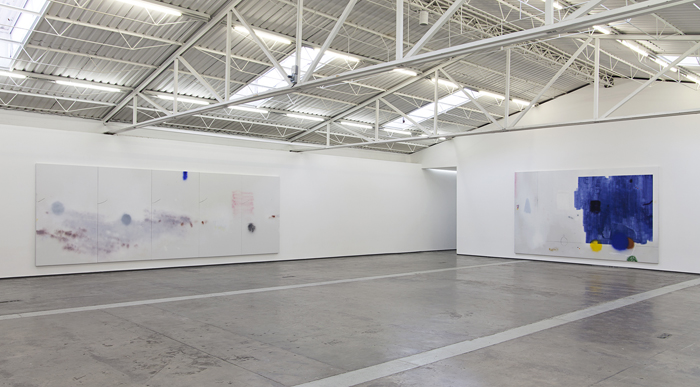 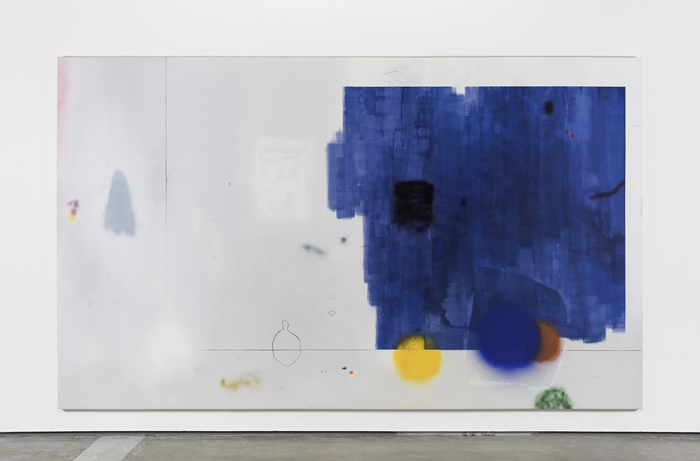 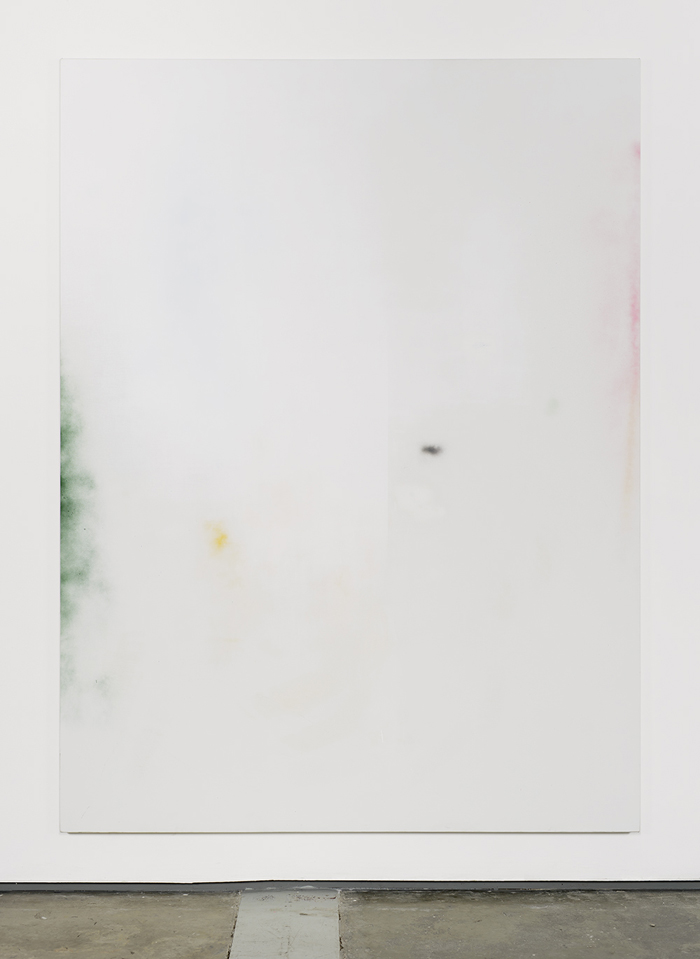 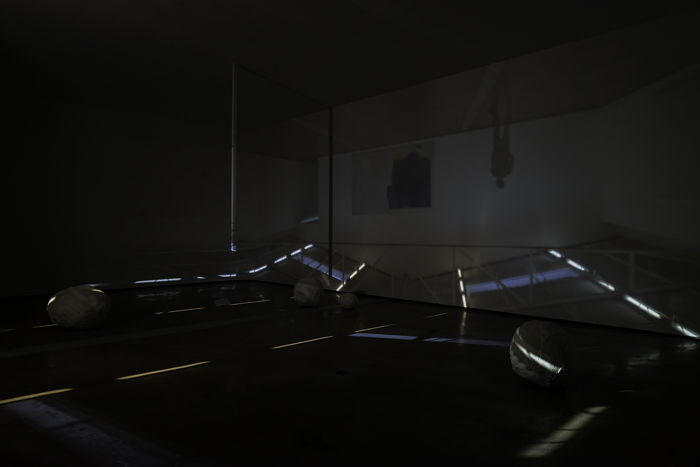 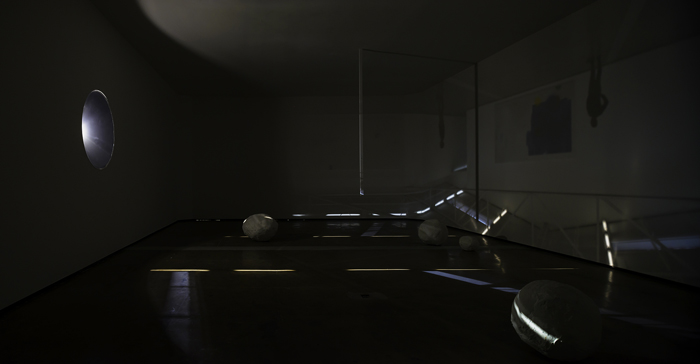 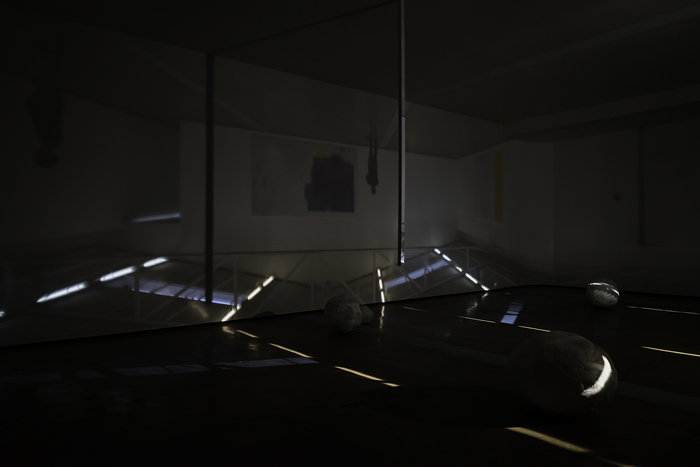 «Light has existed on Earth from its very beginnings. Vision is an adaptation to light. It has not always existed.»(1)
Under the name of Prisma, Julius Heinemann’s exhibition is articulated into three spaces and moments: a pictorial intervention on the wall –the window that reveals the internal structure and simultaneously filters our view of the outside; a set of paintings in the main hall; and their reflection in a camera obscura produced through an opening in the wall.
If we look through the window we see a landscape that blurs in the distance.
Thought nº 1: Piet Mondrian «The straight line is nothing but a tensed curve.»(2)/ It’s an abstraction.
Thought nº 2: Bartolomé Ferrando «Walk on the horizon until you wear it out.»(3)/ It’s an illusion.
Paleontology has shown that the first eye appeared as a response to light during the Cambrian period, 544 million years ago. It allowed a biological revolution that gave a new kind of awareness to independent live forms in their relationship with their environment and to their own development. With the eye, vision is born, and with vision, the image. According to its internal architecture, this organ detects and transforms stimuli generated by waves produced by light particles into information that is reproduced in the brain as color, shape and arrangement. But, as quantum physics reminds us, far from apprehending an objective reality, this sensory system forms an individual mental representation.
Syllogism A: From the window to the hall / «As if your eyes did not have lids.»(4)-Hugo von Hofmannsthal
We all have experienced what happens if you look attentively at an object for a few seconds. Aristotle was the first to describe what he called afterimages: the imagetic remanence that vibrates insistently, in our vision, with the complementary color of the object that is being stared at. Understanding what we see and how we see it has been an endeavor both of science and philosophy ever since: Newton, between 1666 and 1672, breaks down the beam of white light into seven colors through a prism; Novalis, a century later, wonders if we see physically or with our imagination; and Goethe explains the internal reaction to external color stimuli in the context of a study that considers the pathologies of vision as facts.
Thus, in his poetic treatise on Theory of Colours (1810), Goethe, in the wake of Aristotle’s theory of afterimages, sustains that «optical illusion is optical truth». It is no coincidence that the Greek philosopher expressed this idea in the context of his treaties about sleep, wakefulness and dreaming, three states of “suspension”. It is this state of epojé which Peter Sloterdijk analyzes in his lecture Apparent Death in Thinking. In this proposal, Sloterdijk goes beyond the exercise of doubt as a philosophical territory that enables active critical thinking through the exercise of looking, and reaches new dimensions by «eliminating aspects of our own existence»(5), thus allowing a new form of knowledge. A new way of producing theory is implied.
Lets take this expanded practice of epojé as a point of departure to think about the opportunity of consciously building what is indeterminate, uncertain. Hélio Oiticica defined the act of painting as a combination of color and structure.(6) Disassociating himself from the traditional concepts of space and time, he established (dreamed) new relationships between object and subject. Taking a step further, as does Amazonian perspectivism, the object and the subject would relate in the same subjective level. Perception as such would fall apart, and we would have to review «our excessively rationalized mental habits»(7) to reach a previous phase, before established facts, where, maybe, we would see an undetermined image. Thus, Heinemann’s strategies (the painted window, the paintings on the white cube which resemble windows and which are fragments of the wall/structure/world, and finally the reflection of these paintings) disclose how the rational system relies on successive constructions and at the same time releases new subjective space-time relations between the line, the pictorial mark, and the smudge. Thus his painting practice could be seen as a poetic of resistance and deprogramming.
Syllogism B: From the window to the room and to the camera obscura / «The camera, now soundless, as if worn out of the constant effort of addressing the existence of objects, shows one by one things and details which had been brought to life before in the narrative of the film. Now, isolated, fixed in their silence, they are the same, and nothing has changed them.»(8)-Roberto Pontual on L’Eclisse, 1962, by Michelangelo Antonioni
With the light that passes through a focus point, the camera obscura produces a drawing of an ideal world – a projection to be fixed. The paradox is that in both images, on the window as a utopian exterior reality and in the darkened room as a technologically recreated ideal, we cannot escape, as Sloterdijk says, «that area of things which claim to be real.»(9) What we see, what we archive, it arises from handling, ordering and classifying images and/or memories “with claims to the real.” Thus, the space-territory and time-history are bound to constructed and imposed normative notions. Introducing these perceptions into a simultaneous and multiple thought dynamic, as suggested by Bruno Latour(10), would allow us to examine both the scientific and poetic conventions on temporality. But also, it would allow us to discover uncertainty as an open arena of possibilities instead of looking down on it as a place of ignorance.
Epilogue: «The type of eye we vertebrates have is called a “camera eye”… There is a Mexican cave fish that has eyes where light is present, and no eyes where light is absent».(11)