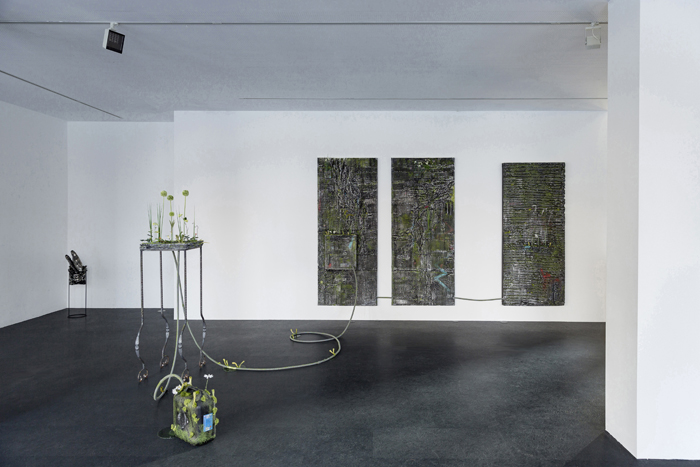 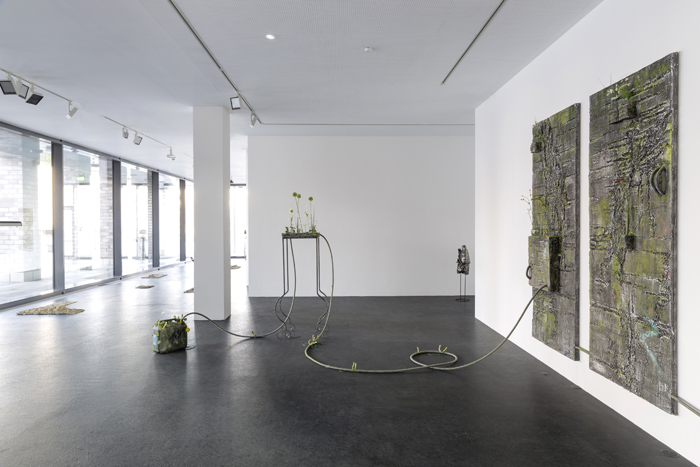 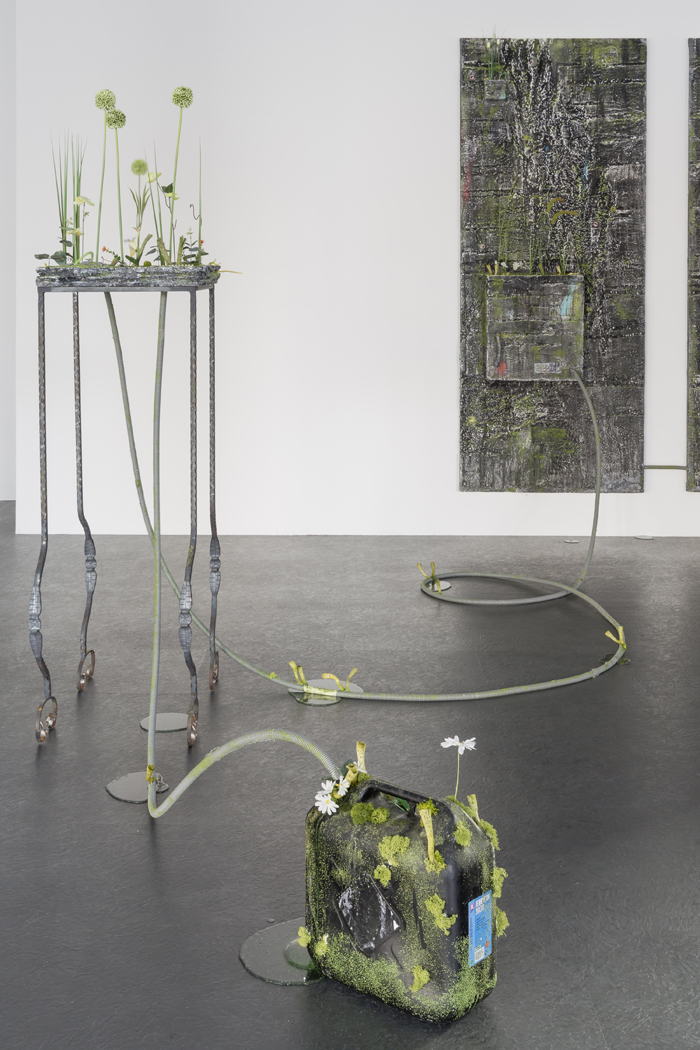 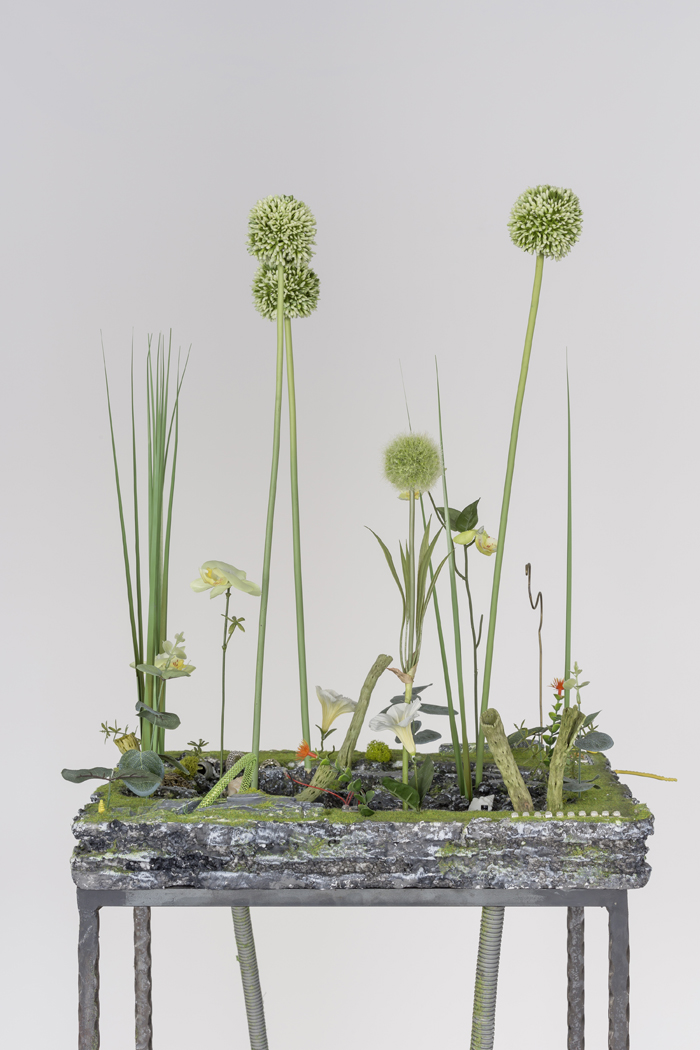 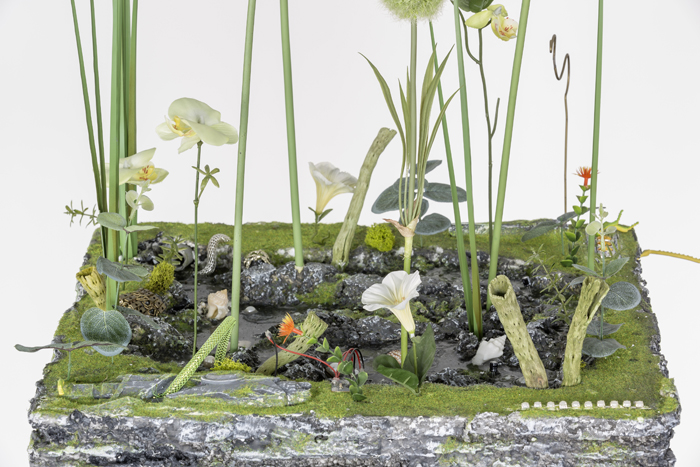 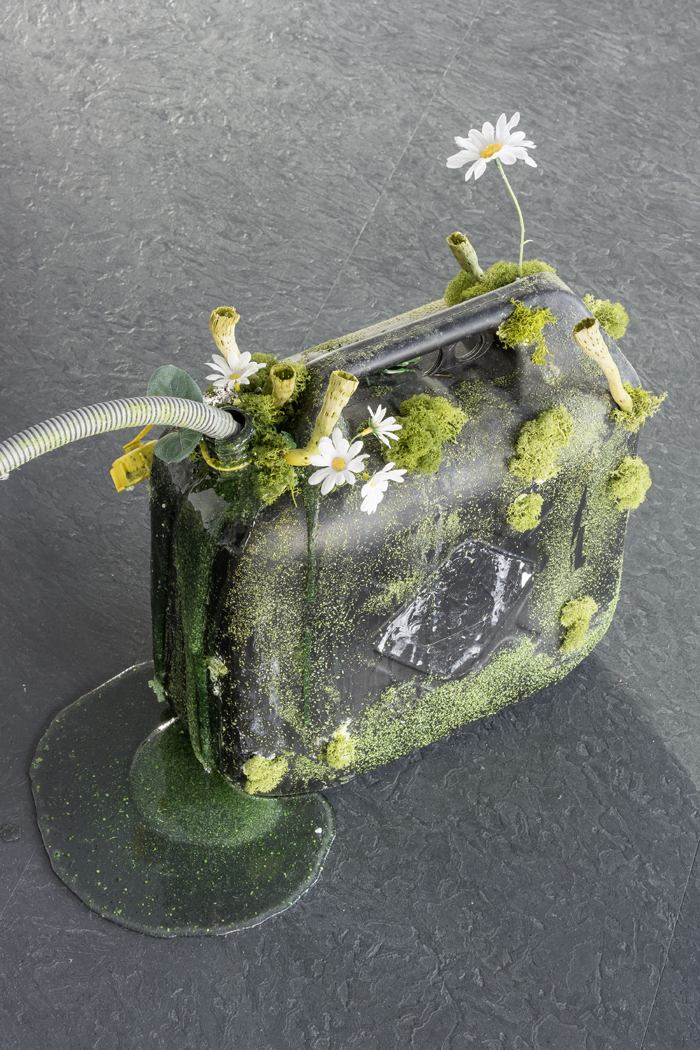 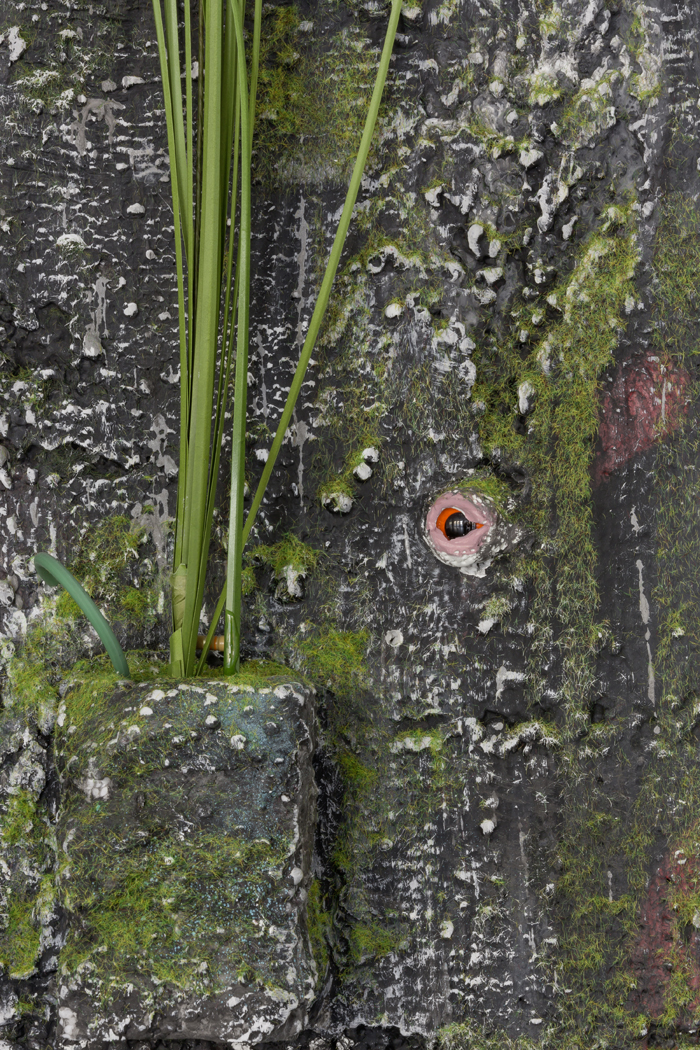 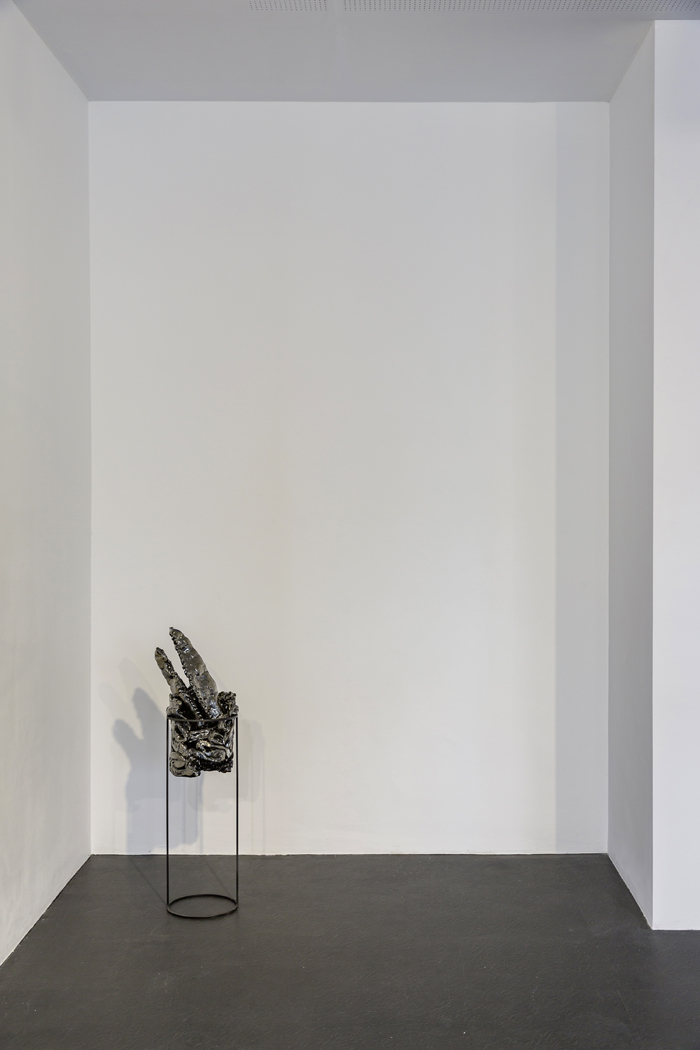 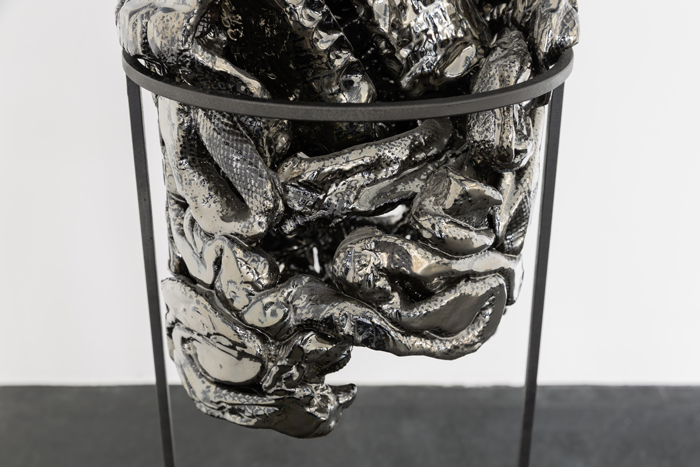 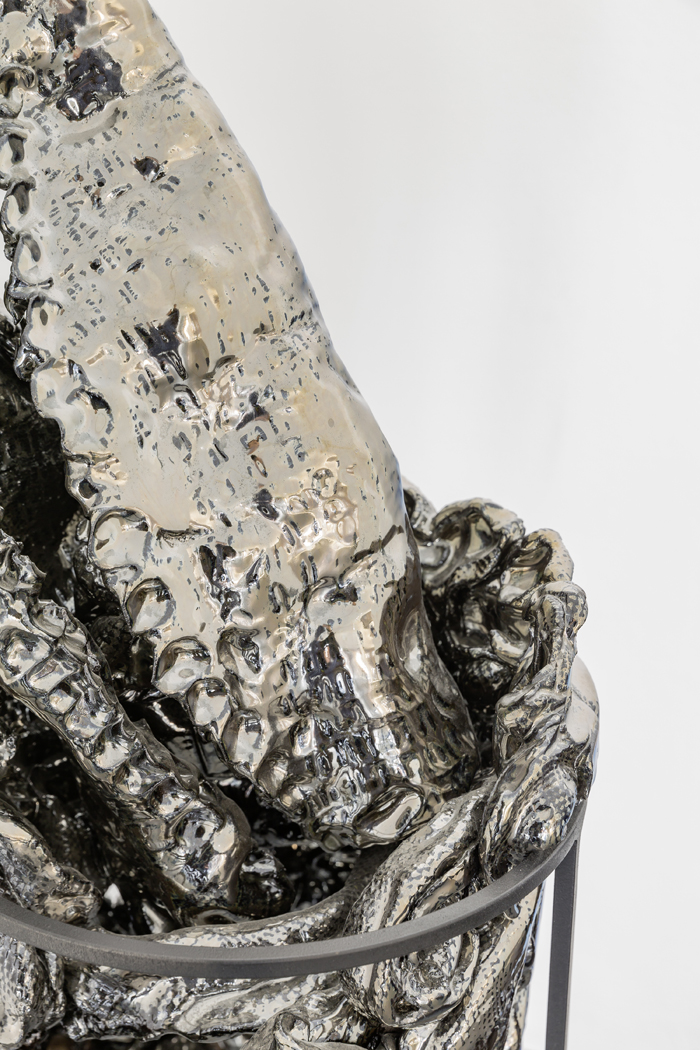 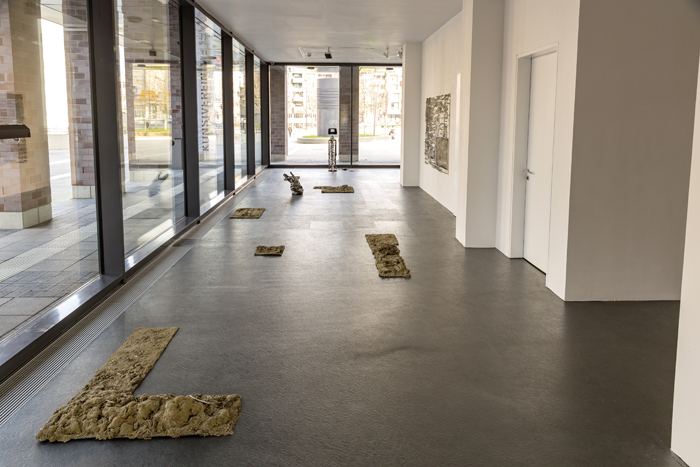 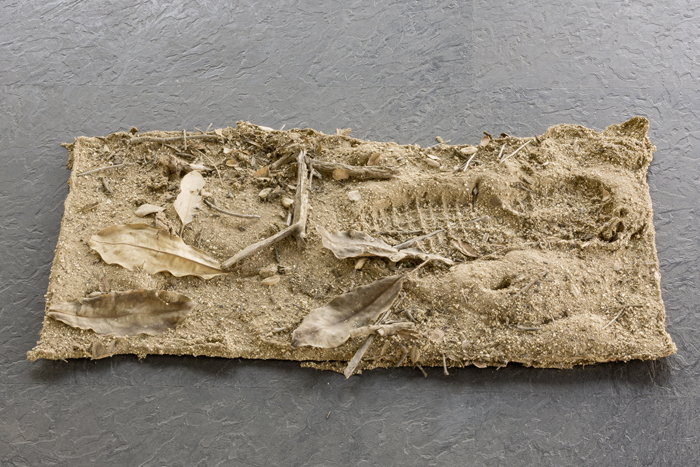 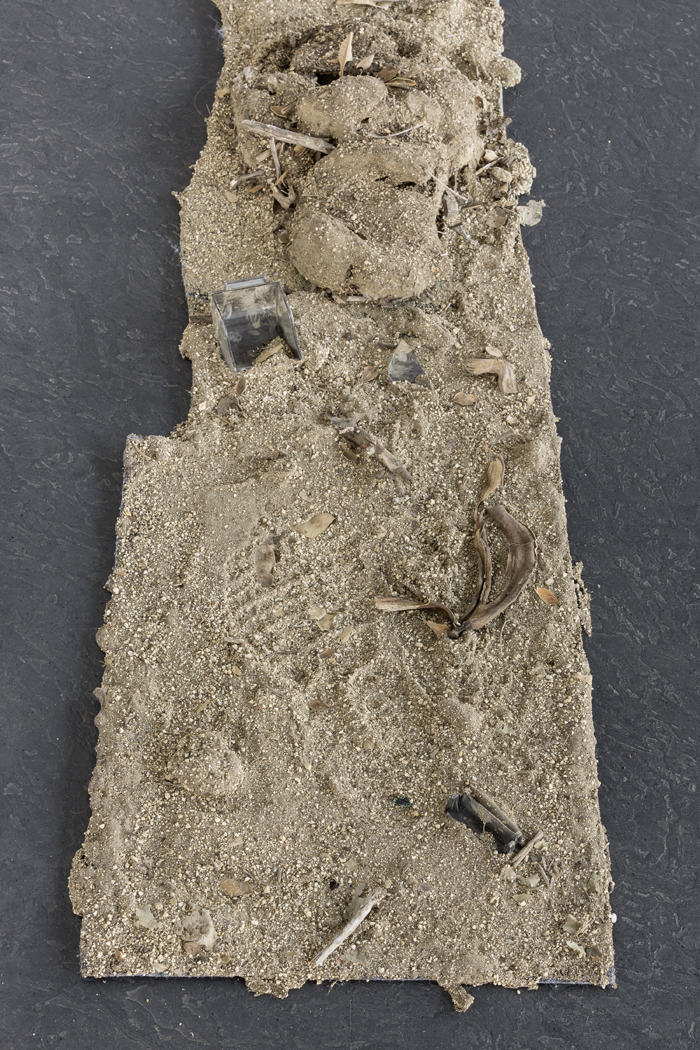 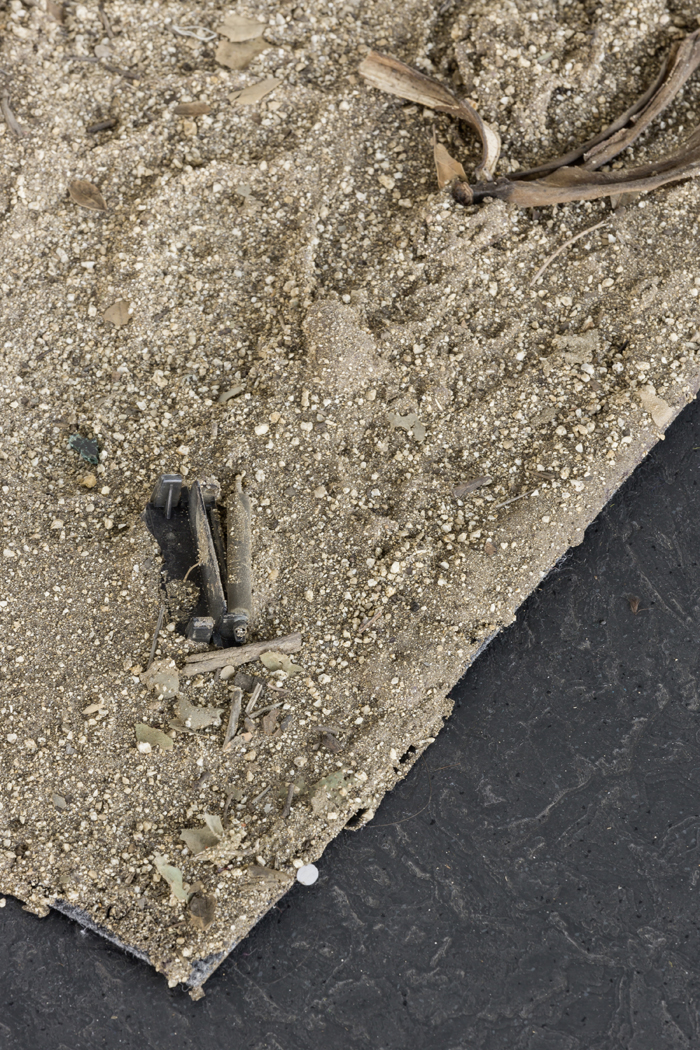 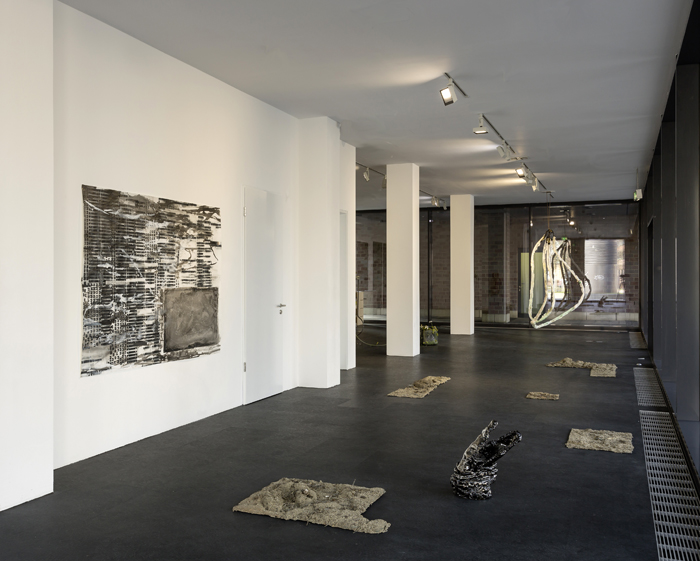 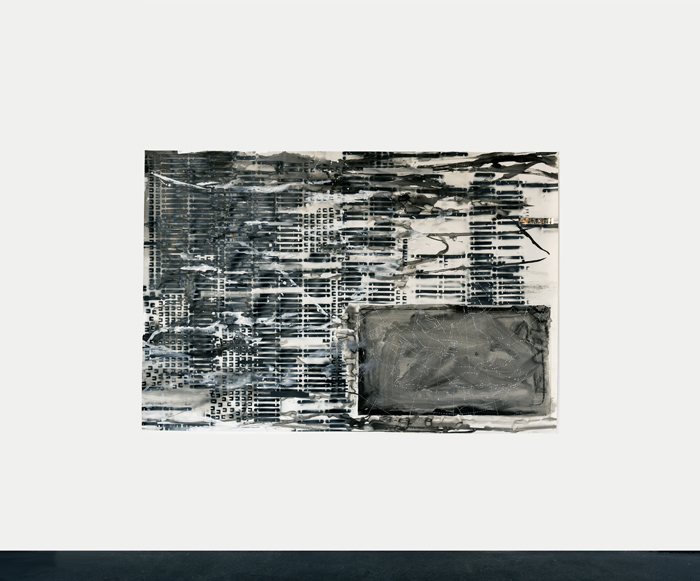 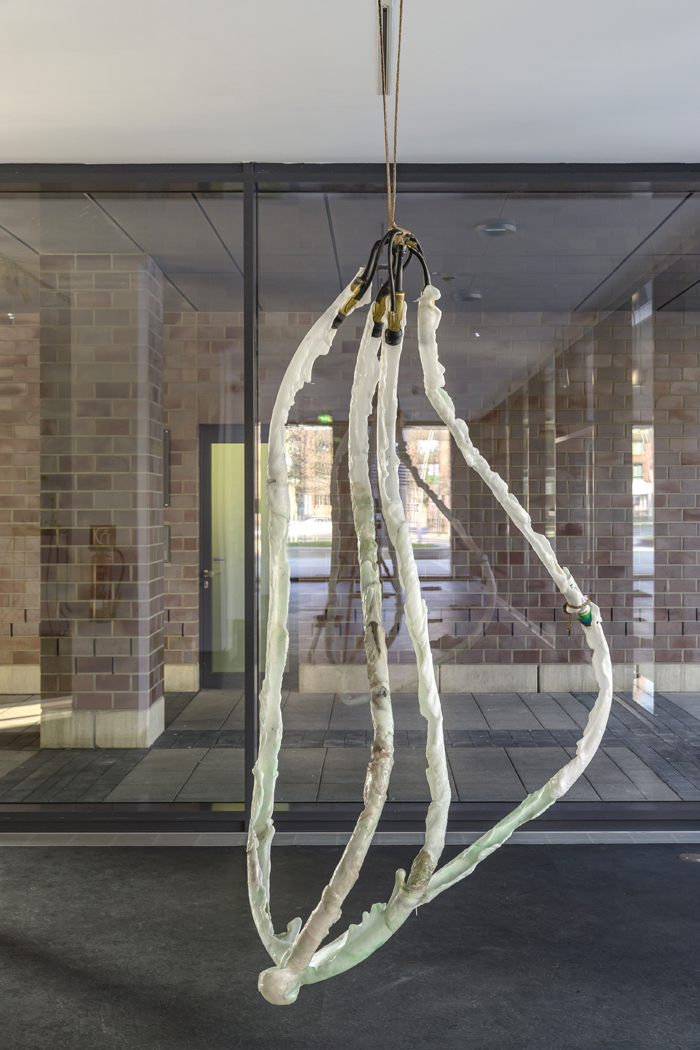 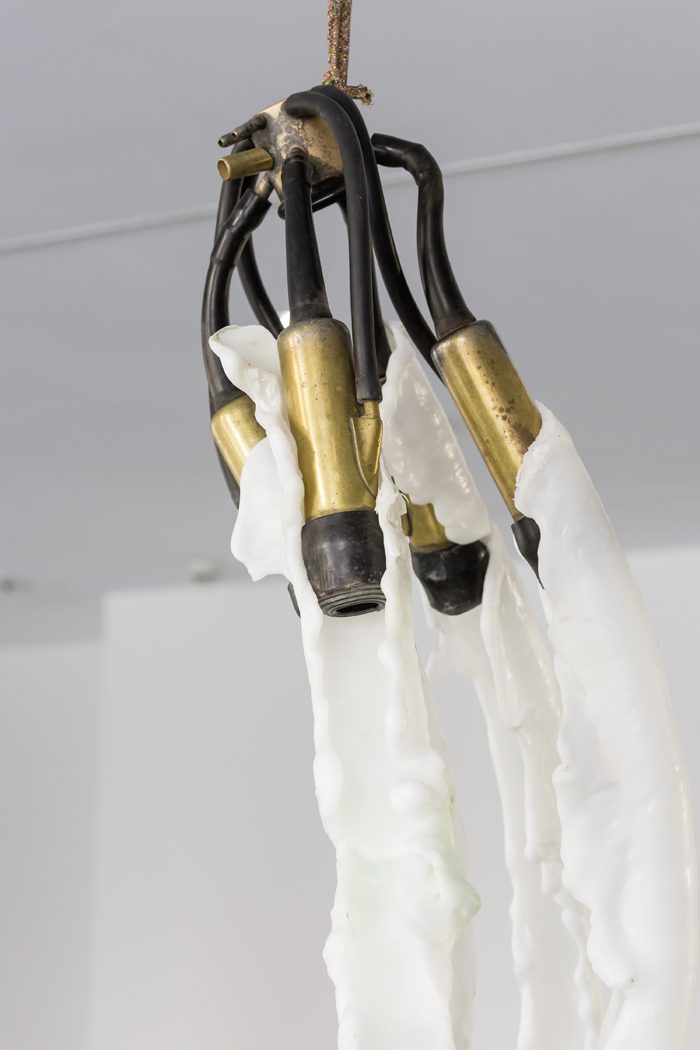 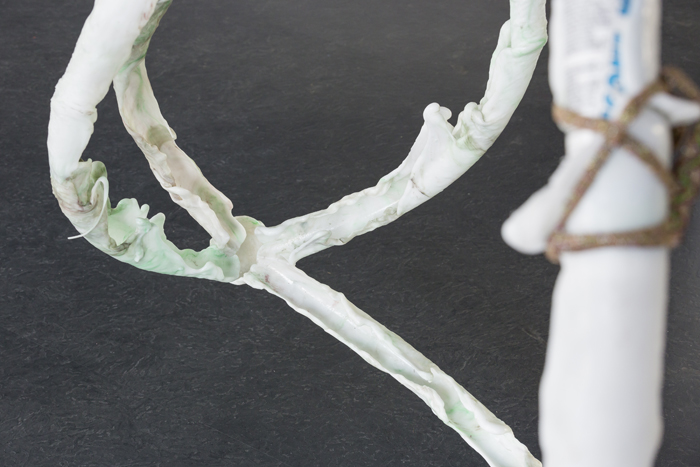 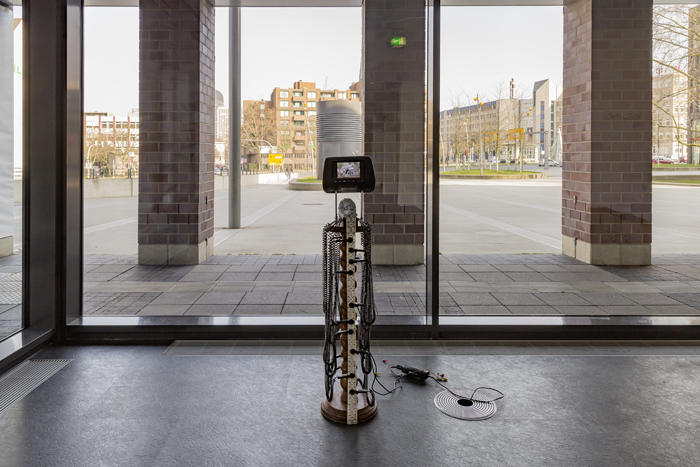 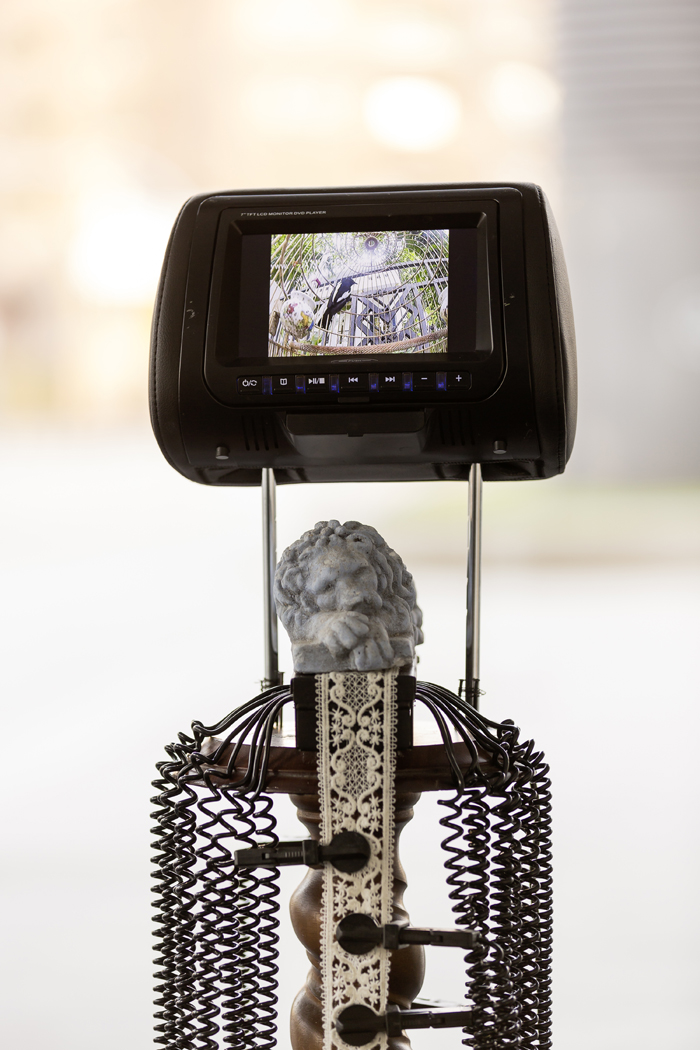 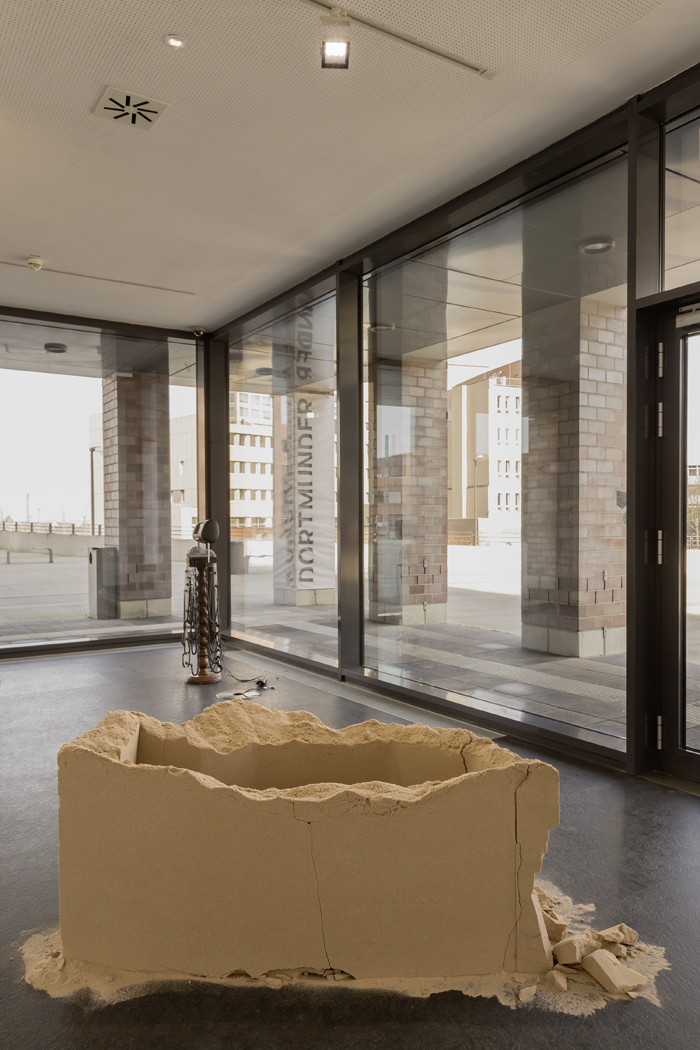 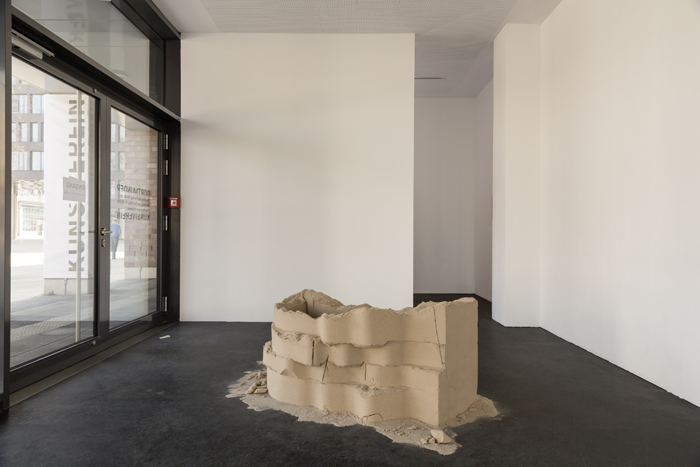 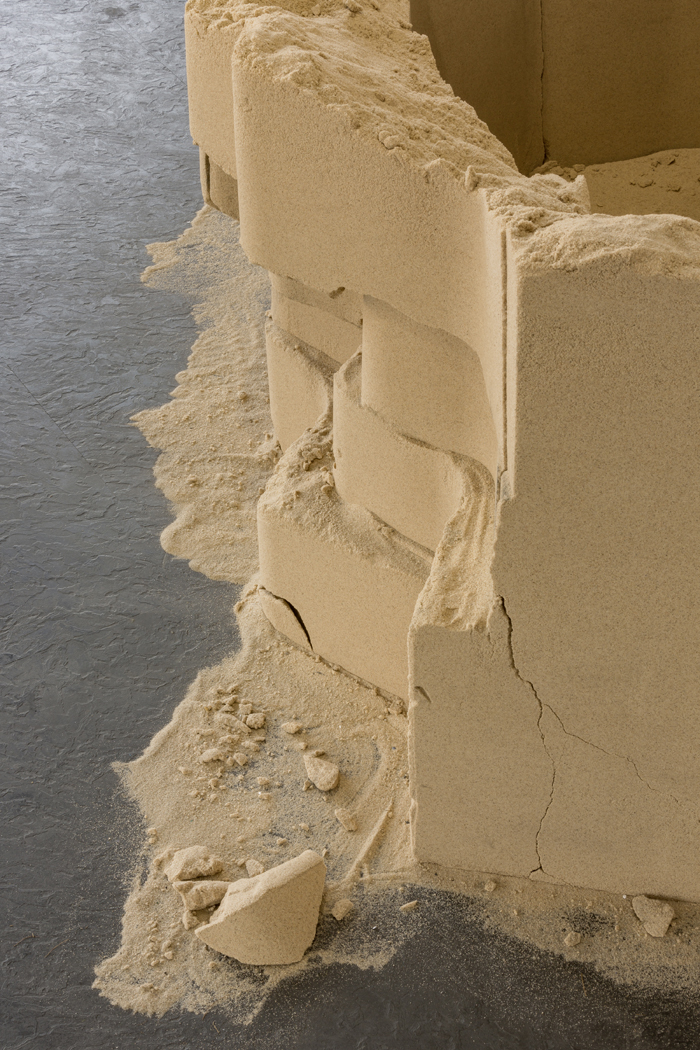 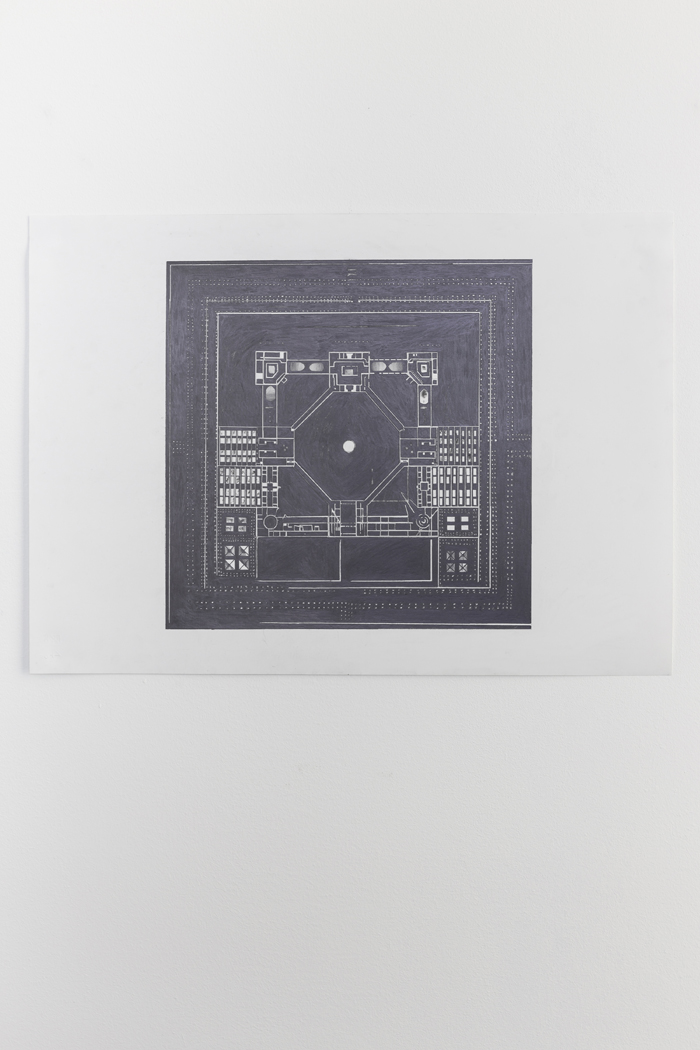 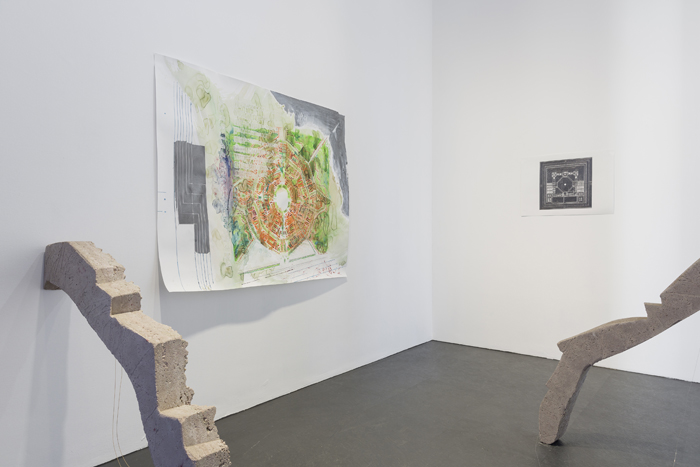 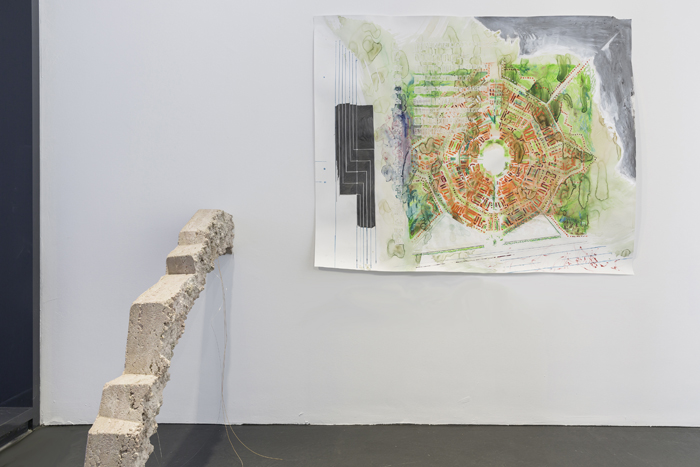 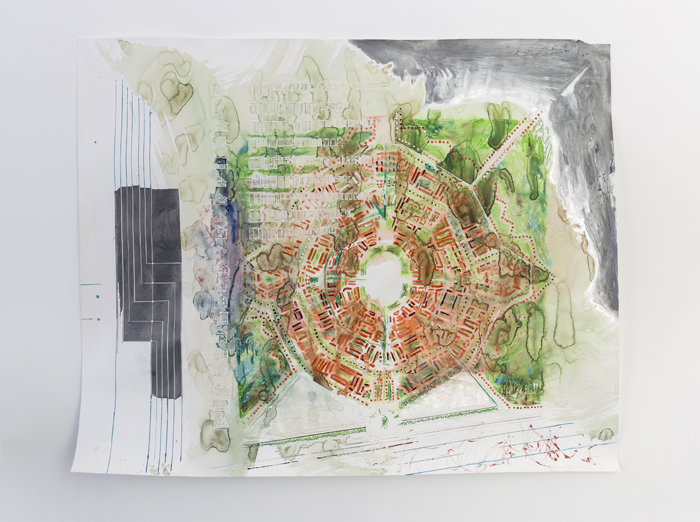 The exhibition ‘Roadside Picnic’ features drawings and sculptures
of six young, contemporary artists which are interested in the
fusion between nature and technology. The works by Rochelle
Goldberg (*1984 in Vancouver, CA), Tiril Hasselknippe (*1984
in Arendal, NO), Veit Laurent Kurz (*1985 in Erbach,
GER), Martin Schepers (*1979 in Lengerich, GER), Raphaela
Vogel (*1988 in Nürnberg, GER) und Phillip Zach (*1984 in
Cottbus, GER) respond with haptic and sensory materiality to the
new, digital technologies.

Arkadi und Boris Strugazki‘s science fiction story ‘Roadside
Picnic‘ lays the foundation for the eponymous exhibition.  The
novel from 1979, which inspired Andrei Tarkowski to the movie
‘Stalker‘,  tells a story about the relationship between the citizens
of the city Harmont and the objects that were left by
extraterrestrians after a visit to earth. Some of those objects are
actually still functioning proof of alien technology.  The ‘Zone’, in
which they are situated, is overgrown by nature and sealed off to
the outside. The only persons who are allowed to enter are the
scientists of the city. However, tomb raiders intrude into the zone
and take the alien artefacts with them to sell them on the black
market. Strange alterations of nature and the tomb raiders
themselves are the consequences.

Nowadays, our highly technologised society conveys – not unlike
the alien technology in ‚Roadside Picnic‘– an impression of
infinite and promising possibilities, but at the same time a
growing feeling of menace.  How does a cat deal with a printer that
spits out paper? How does a dog encounter a vacuum cleaner? Or
an insect the remains of a roadside picnic? What emerges in the
imagination of people who see themself opposed to drones, the
internet or other digital technology of which only the producers
know the mystery of their production and which effects have
become incomprehensible and uncontrollable, even for their
makers?

In the middle between nature and technology and with a penchant
for science fiction, the works by the six artists express, in
different ways, something magical and uncanny, something
decayed, but also something vital and sometimes something
ancient and at the same time post -apocalyptic.

The unique constructions, which are depicted in the drawings by
MARTIN SCHEPERS, seem to be of scientific nature, but at the
same time they bear an extraterrestrial function. In the sculptures
and installations by ROCHELLE GOLDBERG andVEIT LAURENT KURZ,
the material hints on special radiant forces and energies. It remains
unclear whether this fusion is poisoning humans and nature or if it is
good for them. The sand and concrete sculptures by TIRIL HASSELKNIPPE,
which correspond to individual parts of architectural shapes, the line between
architecture and nature,  past and future and material and function
is blurred. They seem as if they were coming from a strip mine.
PHILLIP ZACH‘S lays the floor with carpet pieces made of soil,
plastic foam and litter. His works remind the viewer of a game of
Tetris and forensic soil samples at the same time. Besides, they
might just depict an archaeological proof of a roadside picnic and
therefore radiate the feeling of a post -human age.

RAPHAELA VOGEL‘S works seem like hybrids between man,
animal and machine: the way of use of technological devices or
digital technologies, like the headrest in the car which is fitted
with a monitor, action cameras and the content that is transmitted
by them let the digital become a part of nature and nature a part of
the digital. With all these topics, Roadside Picnic reviews the
relics and visions of the industrial age in the Ruhr area.  Does not
the Thomas Converter at the Pheonix Lake in Dortmund seem like
an object from another planet?

As if from another planet are also the sounds in the performance
SOFT REVOLUTION by MARKUS KARSTIEß (*1971 in Haan/
Rhld, GER.) and CHRISTIAN JENDREIKO (* 1969 in
Recklinghausen, GER). Using the Tensegrity structures by R.
Buckminster Fuller and Kenneth Snelson, the two artists have
designed a string instrument which makes three force fields
interact: The human, the artefact and the play of tension and
compression. The performance takes place on Saturday, April 23
at 4.00 p.m. in the Kunstverein