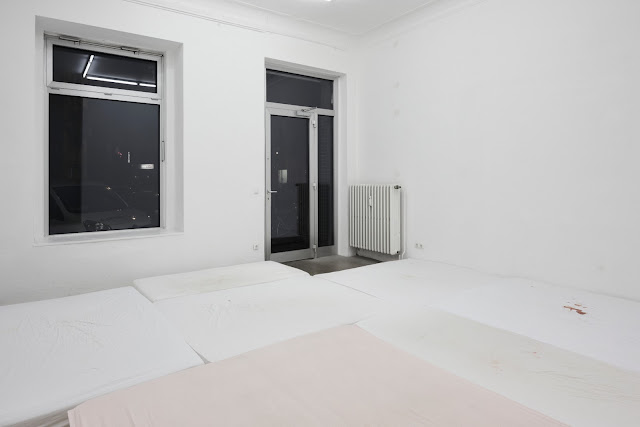 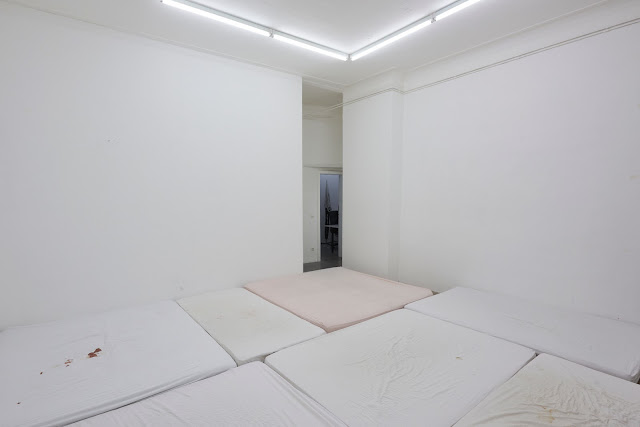 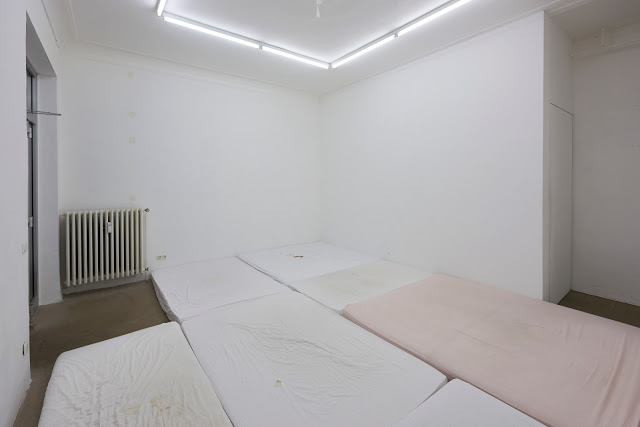 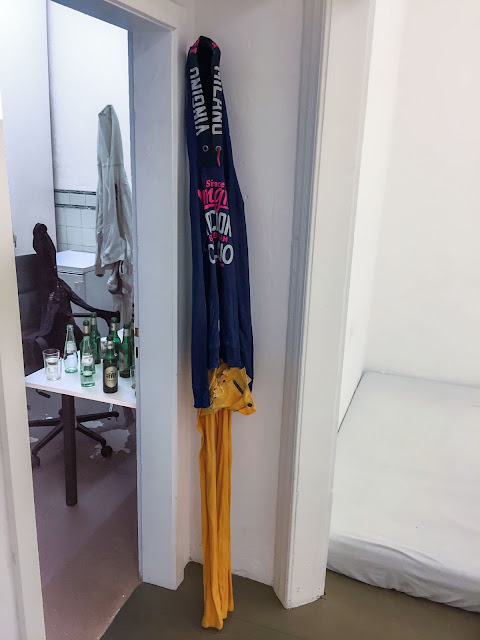 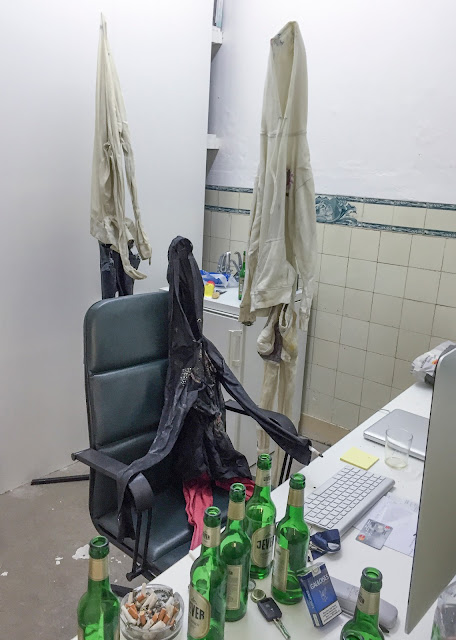 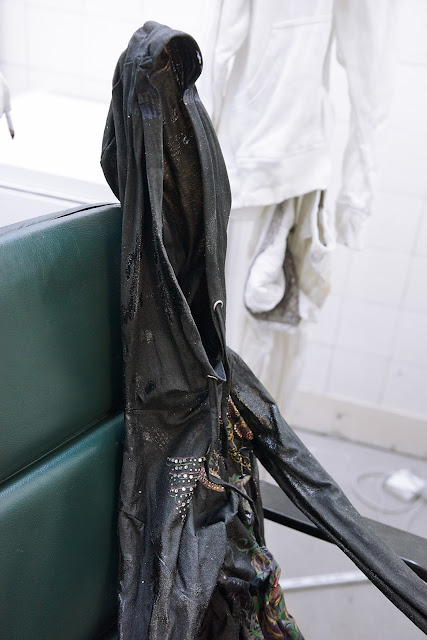 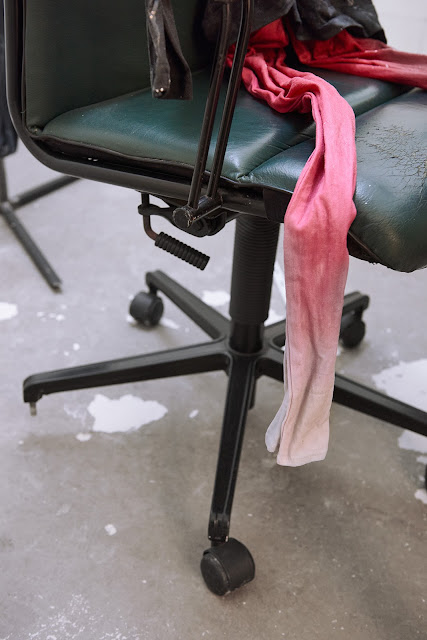 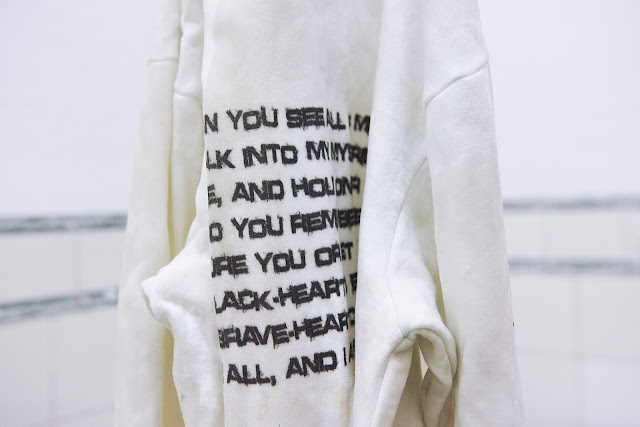 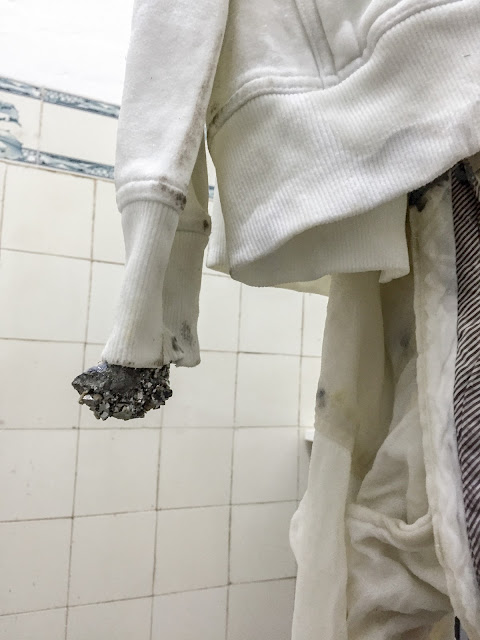 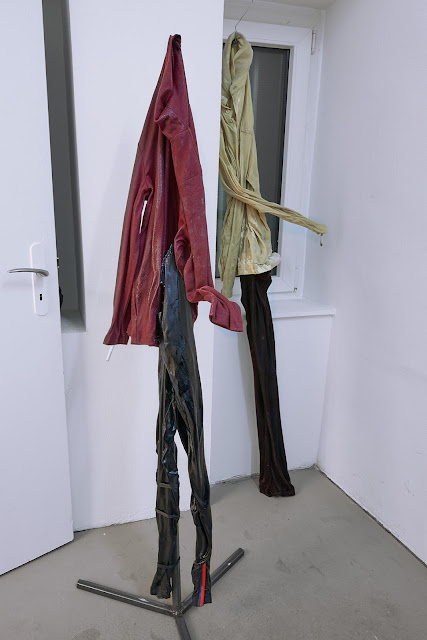 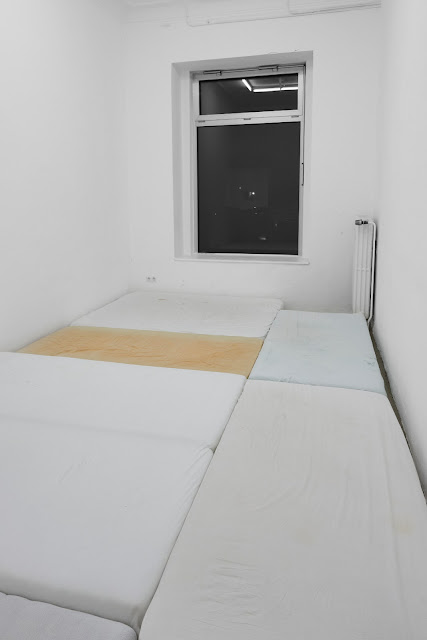 It is said that individuals act according to their background. Action is thus placed within a particular frame, colour or landscape. In much the same way, Tobias Spichtig describes and mounts the various components of his exhibitions as backgrounds. Backgrounds that are not intended to defne the space, but rather provide a kind of framework for action for an individual, who is not described in detail. When, as in earlier exhibitions, visual and acoustic elements come together, the visual component – namely large-format paintings, which, in the context of the gallery, quickly become the centre of attention – is taken out of focus and hung loosely in the corner. In such cases, he calls them “backdrops”. The acoustic element is compiled from an archive of background music; it is either bar music, which he performs either alone or together with Theresa Patzschke, or clips composed of quotes from flm music. Both highly present elements (i.e. the volume level of the music and the large format of the paintings) are thus intended to have as little “actuality” as possible.

These two elements in the exhibition in the gallery Jan Kaps in Cologne are represented by the eponymous mattresses – including further “paintings”, which take the form of bed linens provided friends – and humanoid sculptures, with cloths stiffened with a material used in aircraft construction, whereby the clothes are also provided by friends. These two work groups were created successively in the past year. Both are obviously images of the presence of those not present. As non-present individuals, the slightly oversized clothing sculptures are also taken out of focus and placed in the background. The mattresses are, by their very nature, also not the focus of attention, since they are covered by bed linens. Psychological effects, which could theoretically come into the fore, develop quite differently, depending upon the viewer’s emotional state; in any event, these effects distinguish us from the artist, who envisions friends, whereas we see only a certain ghostlike absence. His image, which is laden with affection and friendship – the friend on the bed, a generally rather peaceful place – is transformed in the eyes of the viewer into a stranger, to whom one has come too close and is comparable to the unpleasant, preferably expelled thoughts of presences stored in the mattresses of hotel beds. The construction of intimacy towards an object has always been one of the tasks of sculpture, and the slightly larger-than-life scale is a trick of classical sculpture, used to facilitate an intimate view even from a distance, which would otherwise only be possible from a much closer proximity. This principle borrowed from stone sculpture, which had to overturn material abstraction by means of many such tricks, is, however, merely secondary here. In this exhibition, the means of creating a sense of intimacy towards an object are actually quite simple. What remains, so to speak, is the resulting intimacy within an atmosphere of slight eeriness, which depicts the actual story that takes place within exhibition against the background of Tobias Spichtig’s works.