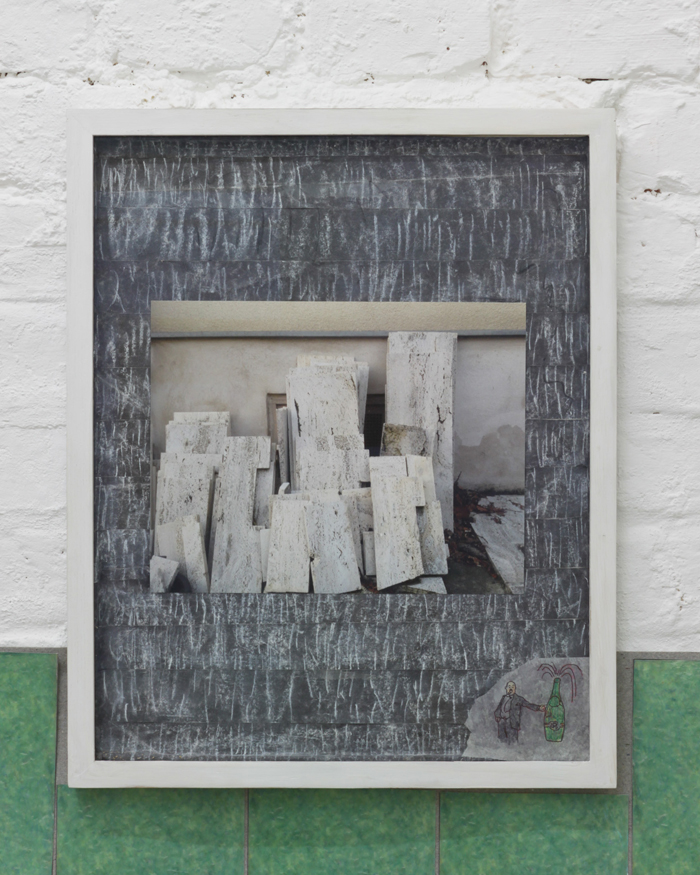 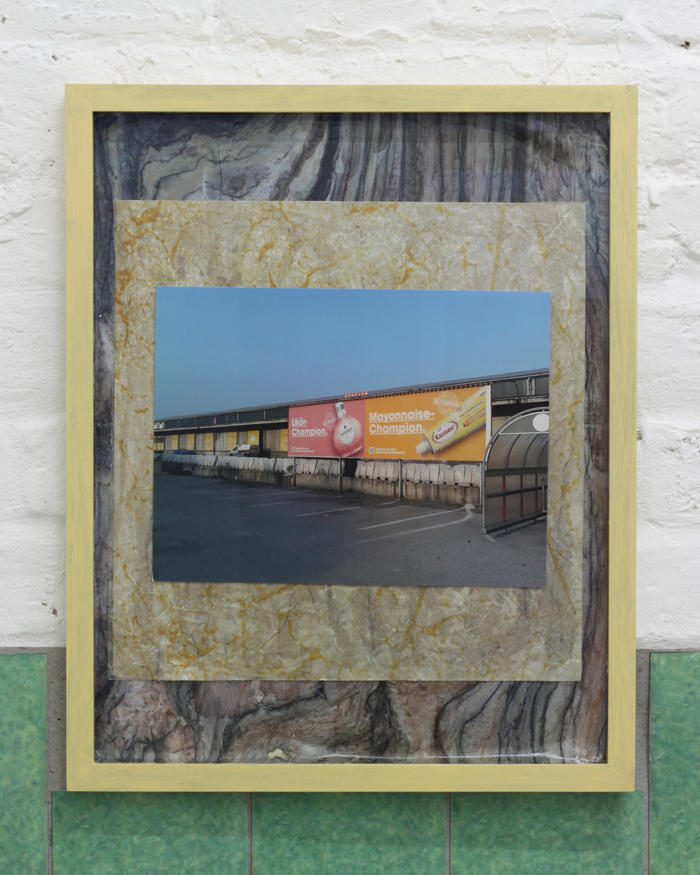 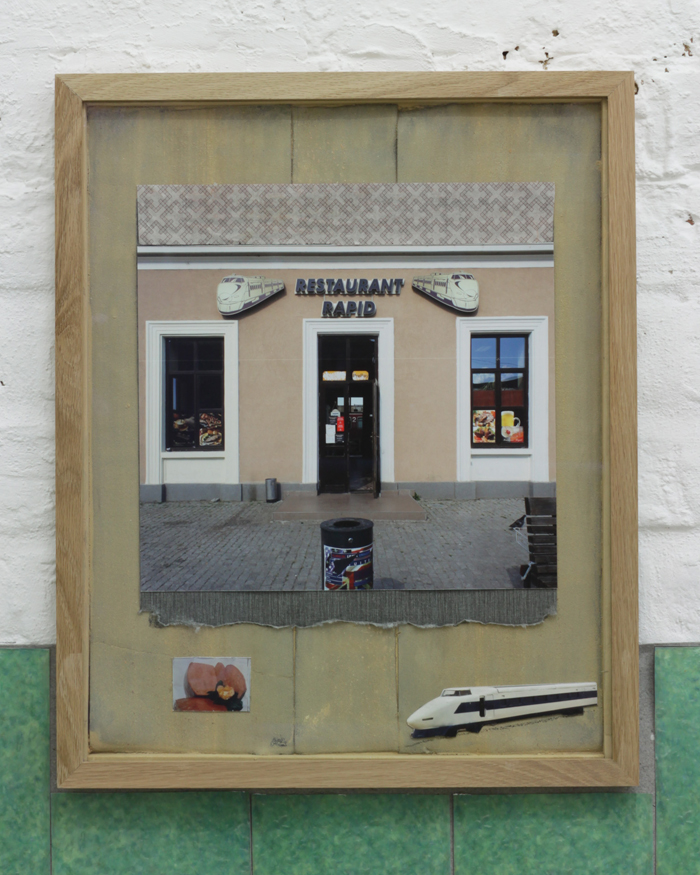 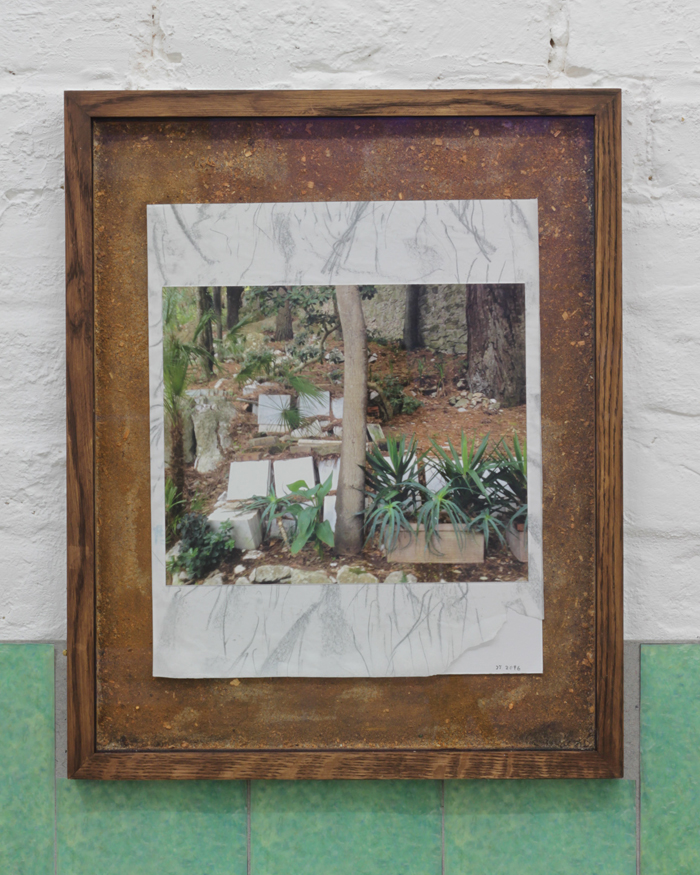 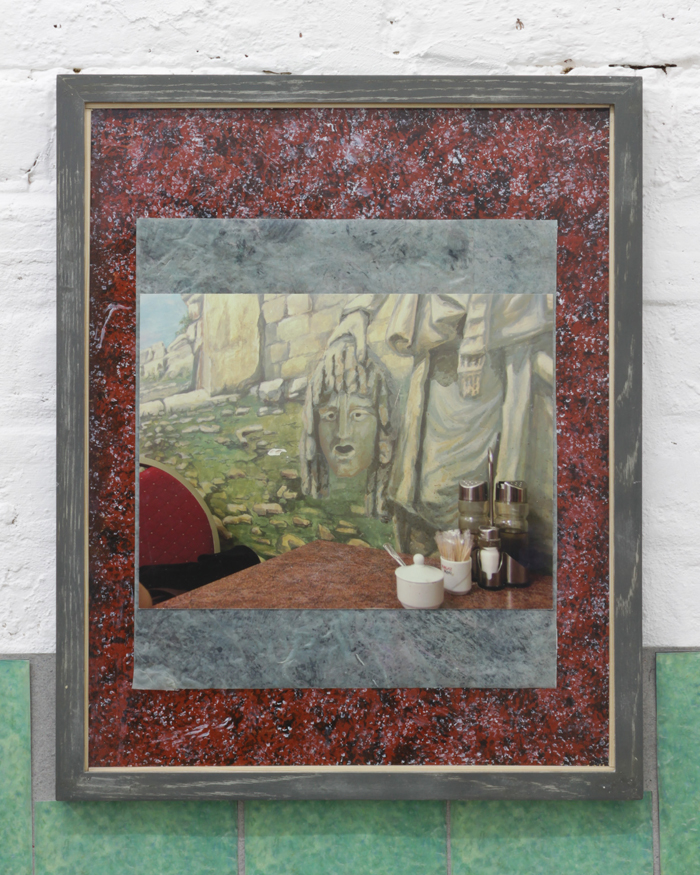 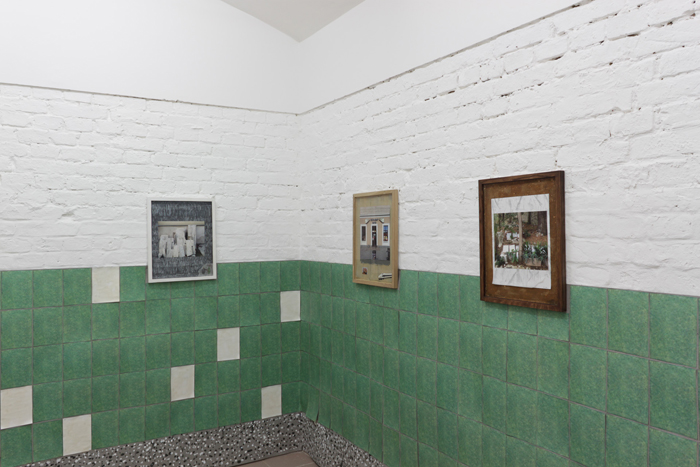 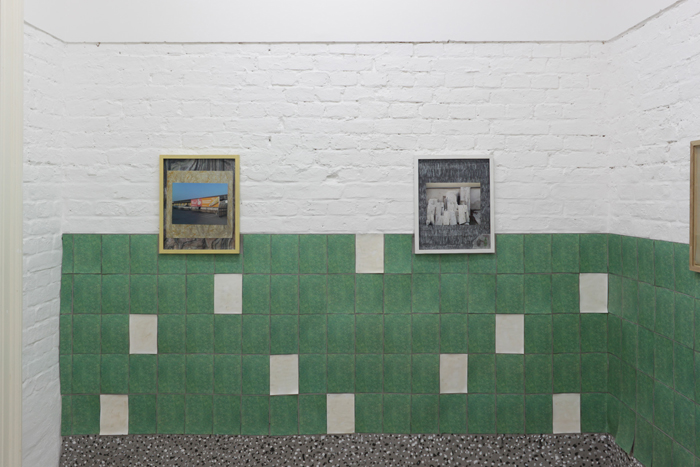 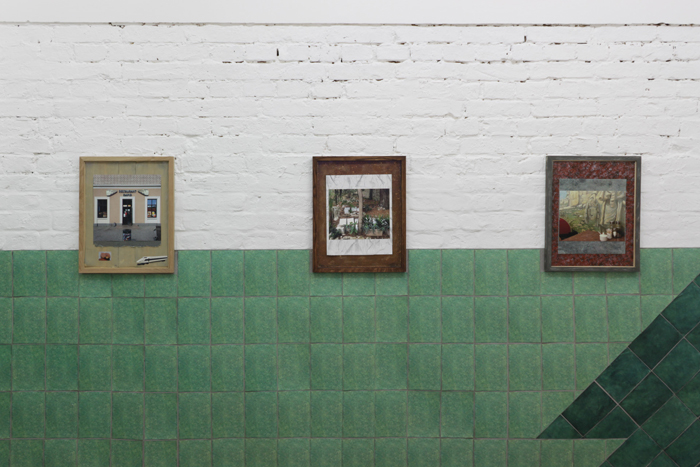 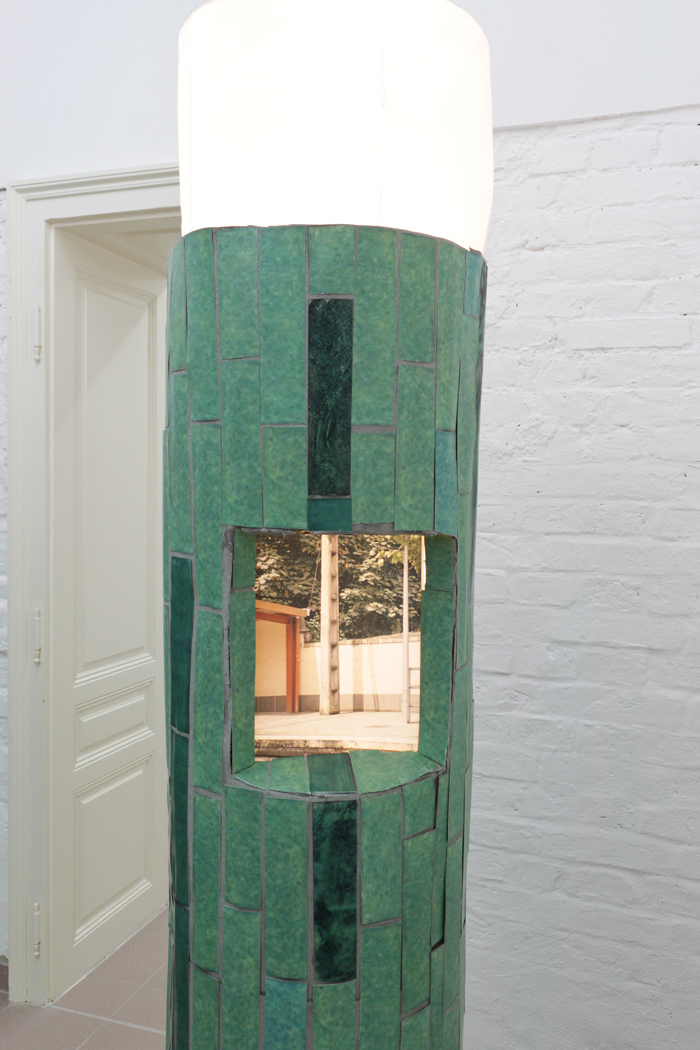 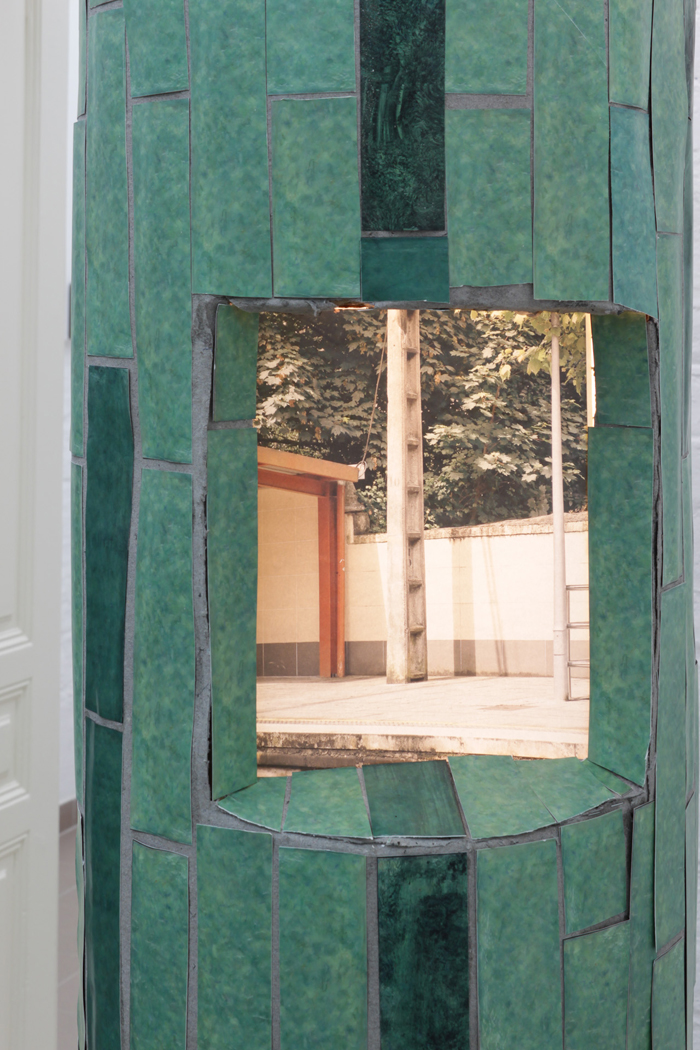 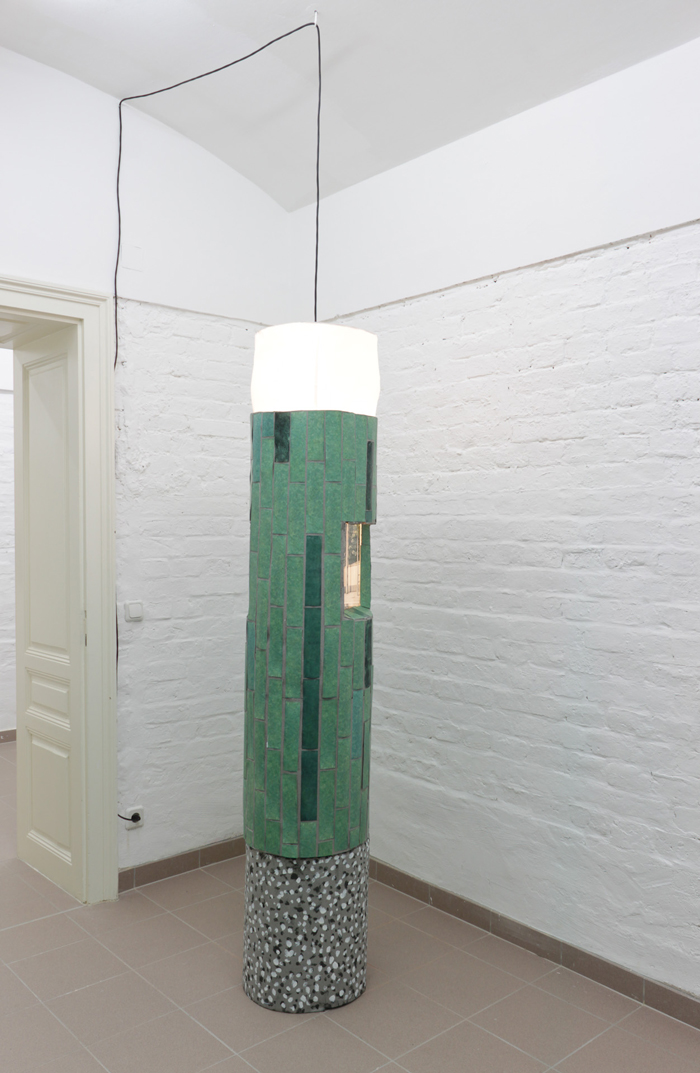 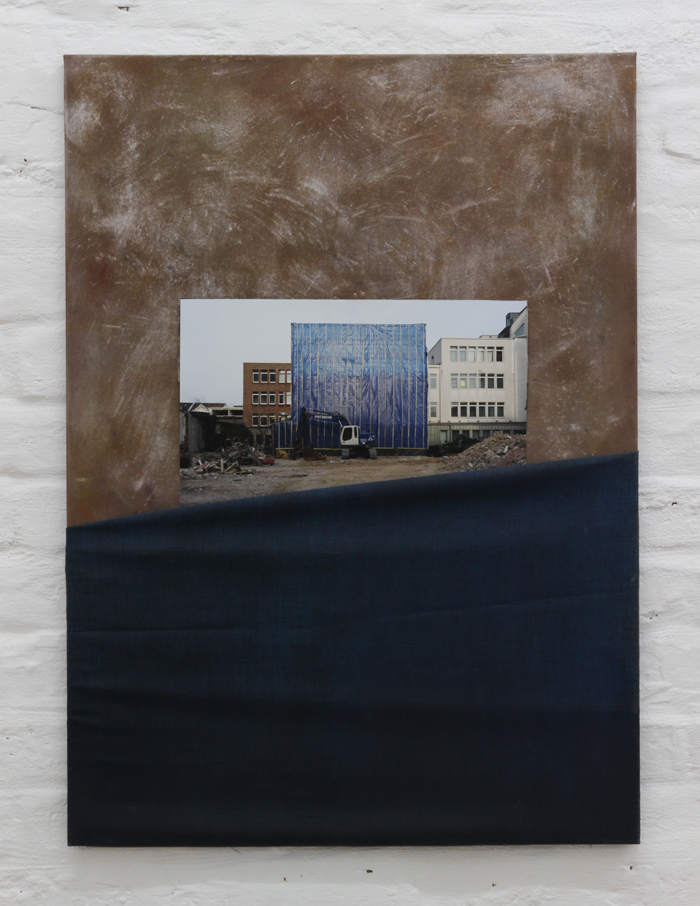 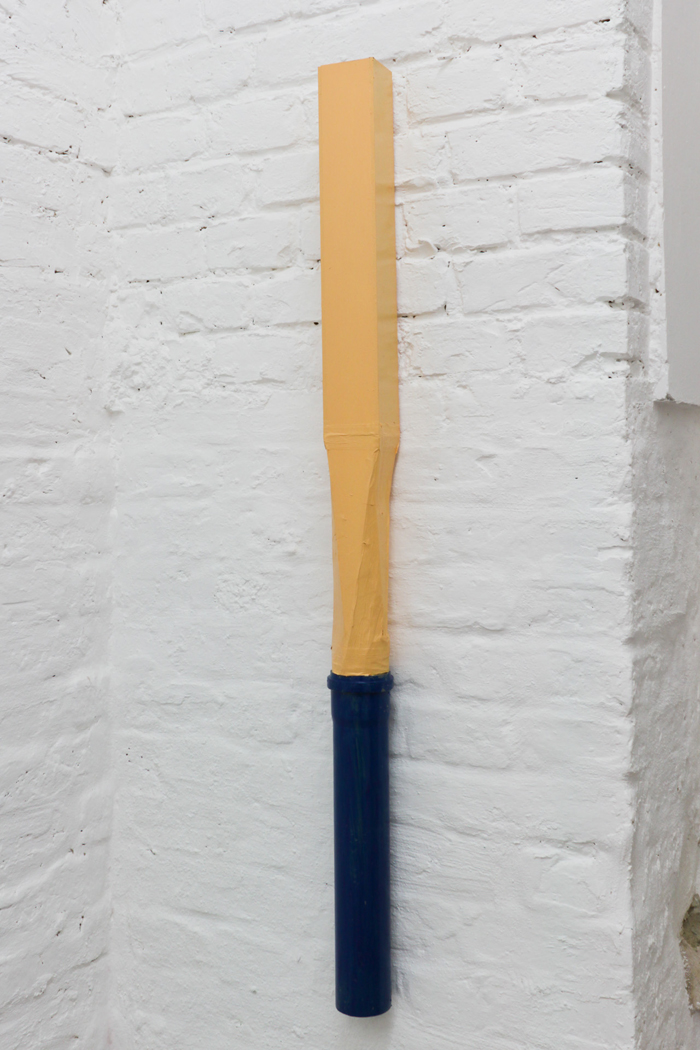 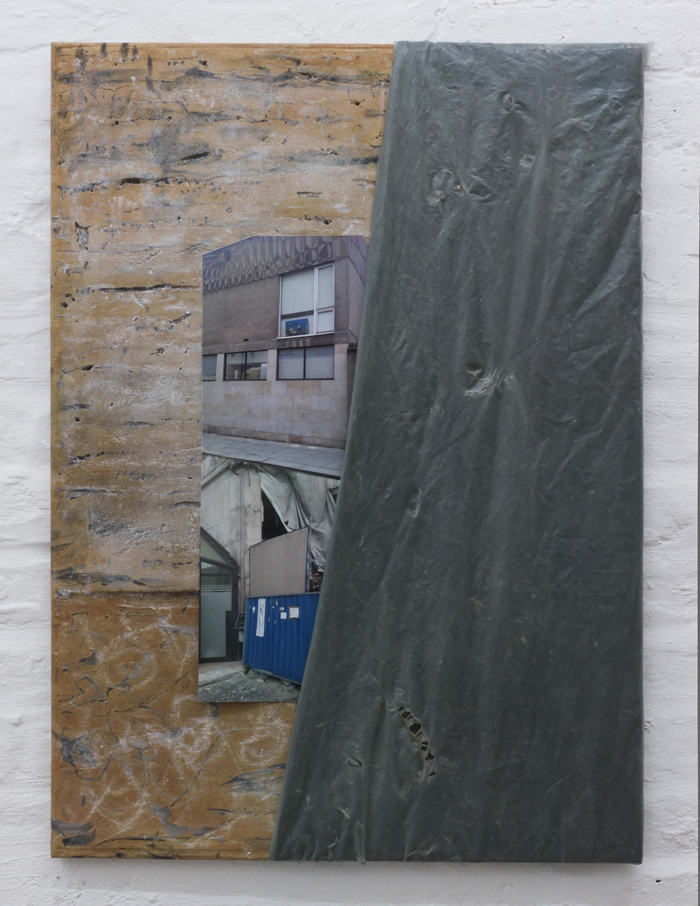 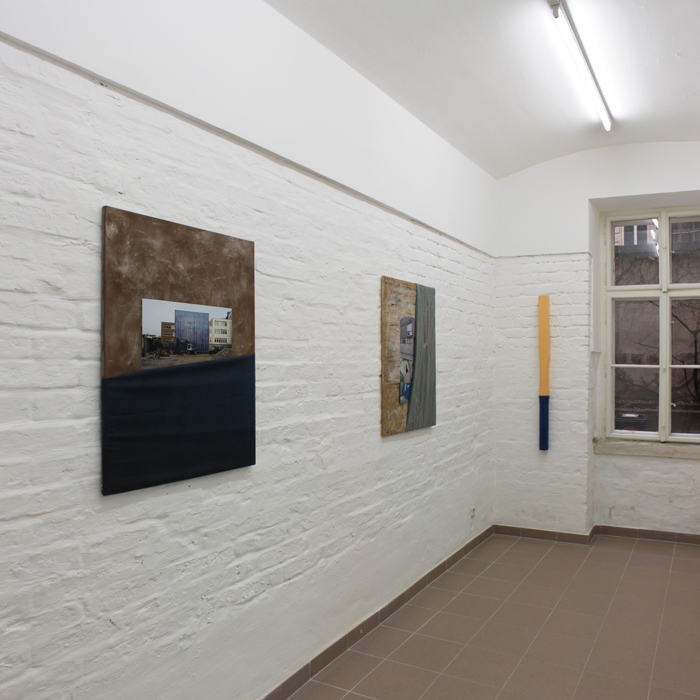 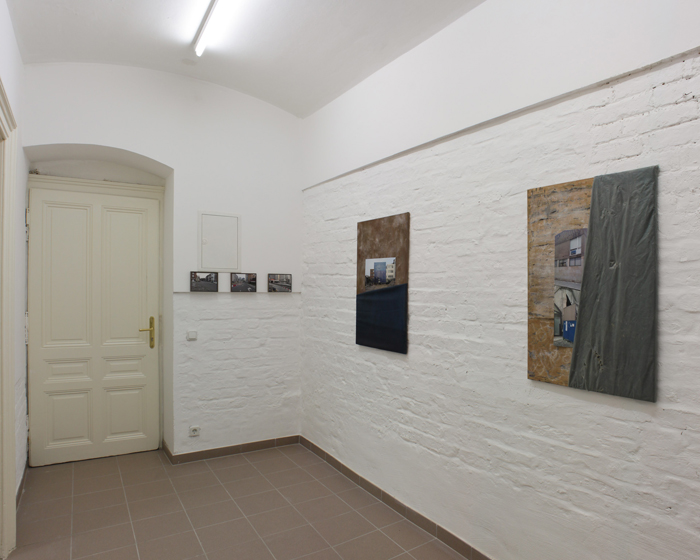 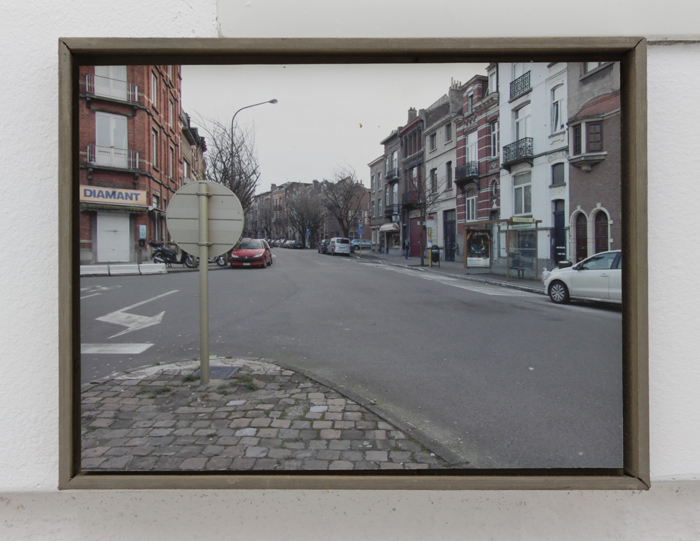 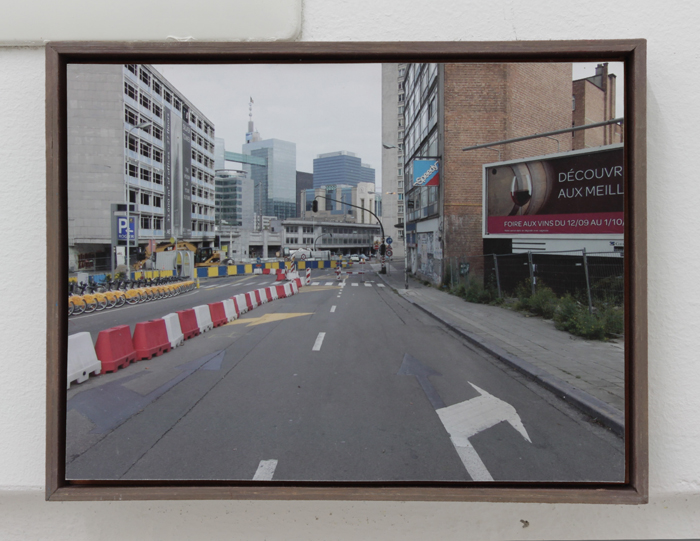 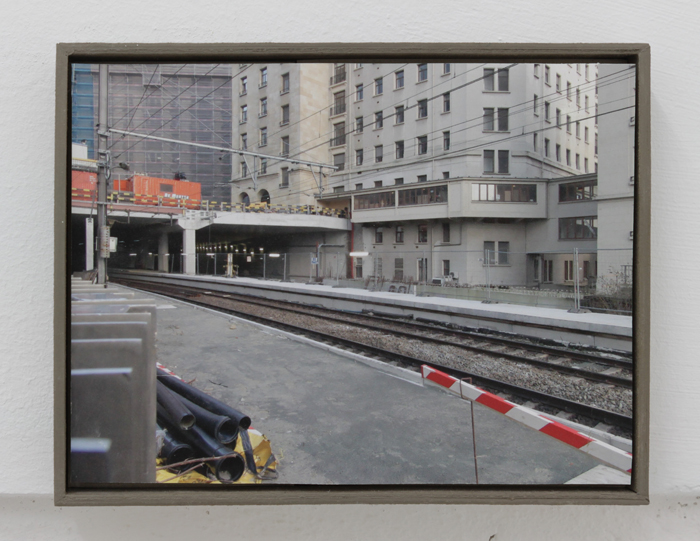 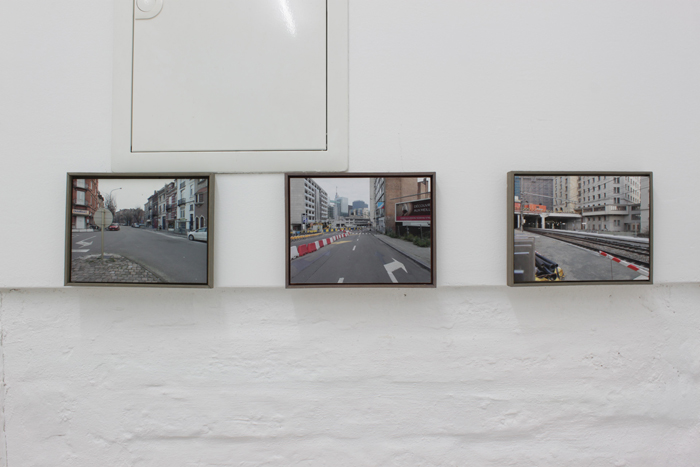 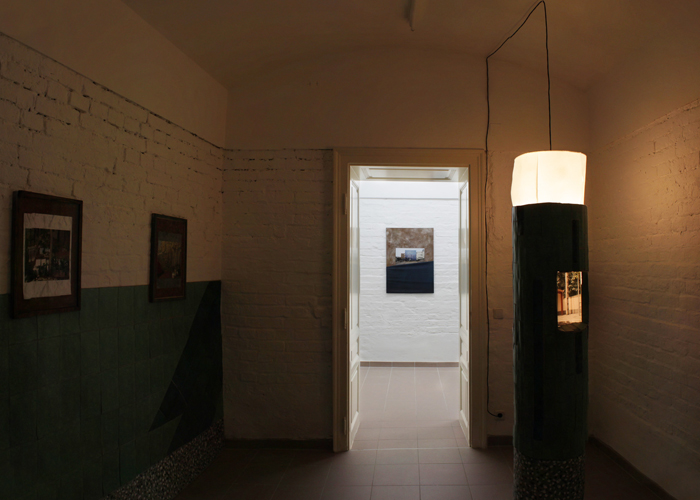 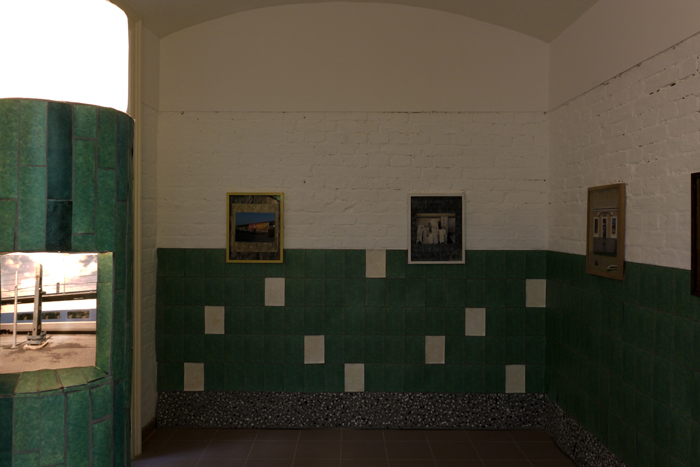 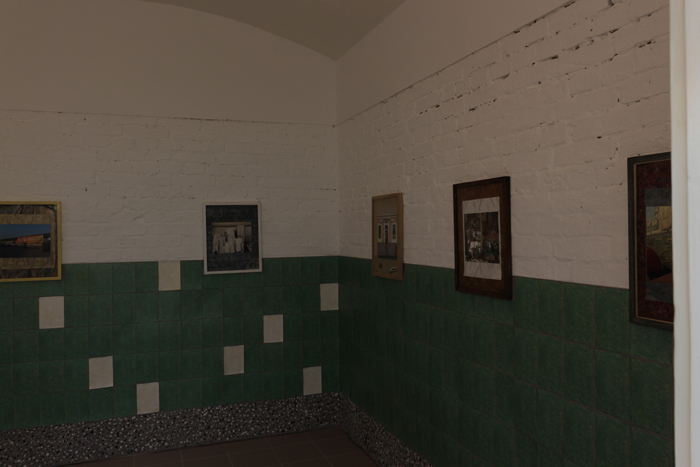 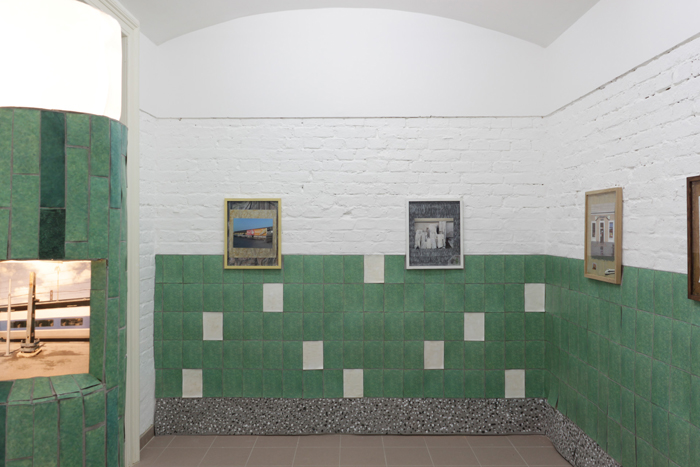 "Problem: you've got this window. You need to do something with it.
Solution: just put something in there. Anything. If you don't have anything, just paint the window or get something printed." (from: Vitrine Intervention at Projectstudio Sint-Lukas, Brussels, 2013)

The invitation card for Julian Turner’s first solo exhibition in Vienna reproduces typical tiles of the German Democratic Republic. Its not-quite-monochrome green reminds us of the not-quite-white of popcorn wallpaper. Like popcorn wallpaper, it is decoration so commonplace, it might get away with not being decoration at all. The clean flatness of modernist aesthetics is eased to fit the simple working class home. The tiles go well with the fake stone grain painted as background for Turner’s collaged canvasses, and with other cheap but efficient ways to cover bleak surfaces.
Much of Turner’s work reads as a taxonomy of accidental effects and improvised solutions. Places, where such effects turn up, are construction sites, billboards, public transportation, pubs and bars. Everyday functionality and casualness turn quick fixes into permanent installations. Coincidences produce elaborate, sometimes unintentionally funny situations. The temporary and unfinished nature of these situations is most readily displayed, for example when an old utility pole is replaced by a new one but the old, useless one is never actually removed.
Turner is experienced in infiltrating the aesthetics of contemporary art with his type of casual imperfection. He founded Bar du Bois – a hybrid of exhibition space, functioning bar, and ongoing collaborative work – with Florian Pfaffenberger, operating its various forms with Ann Muller and Andreas Harrer. The Bar’s most permanent instantiation was housed in a 1950s building in Vienna’s first district from September 2013 through June 2015. The iconic globe lamps, gracefully displayed through the space’s old shop windows, became Bar du Bois’ signature feature. The annual awarding of Turner’s own version of the Turner Prize (since 2011) completes the picture. The miniaturization of the event introduces visible improvisation into the perfect representational machinery of the official art world. In exhibition making and staged press events, decisions and constructions are very temporary, but the impermanence is usually disguised. We are used to surfaces being perfectly finished, each work and label sitting in their proper places, press releases situating the artist within the art historical canon, generating an air of stability and significance for the work. Like a monochrome in comparison to the design of GDR tiles, the relation between the ‘original’ and the model exposes different versions fakeness, rather than reaffirming the authenticity of the seamless surface.
The seats in the business class compartments of Austrian Railjet trains feel very convincingly like fake leather. The black is somewhat flat, the smoothness of the surface a little too artificial. But actually the leather is real. This is the banality of the elite exemplified––the world observed by Julian Turner.