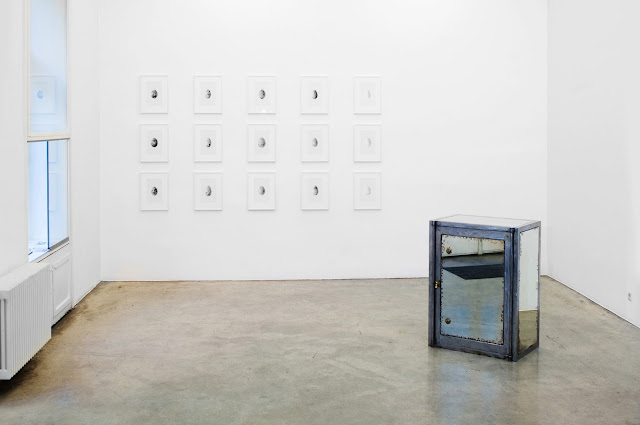 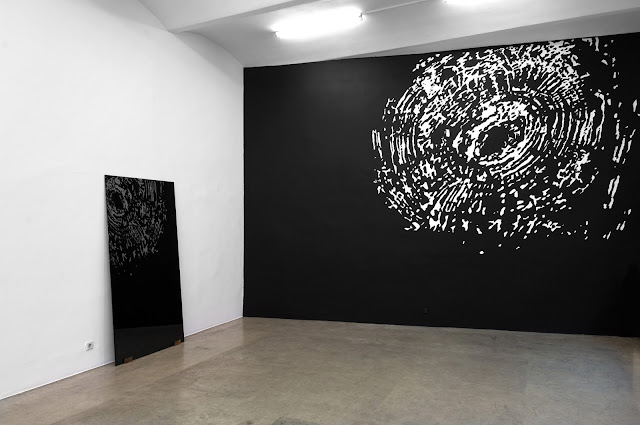 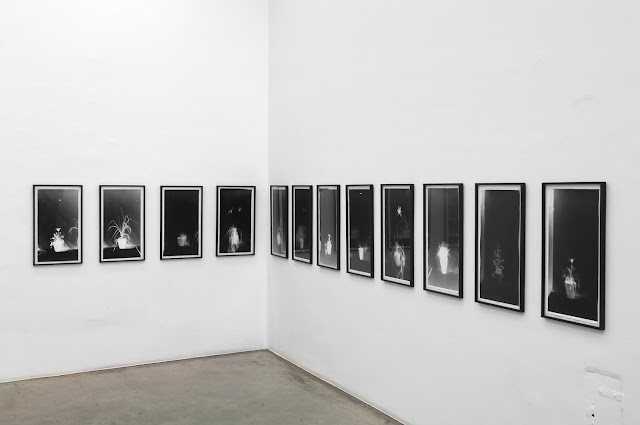 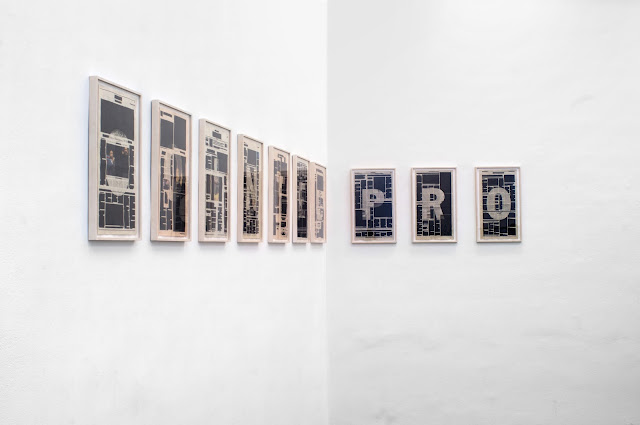 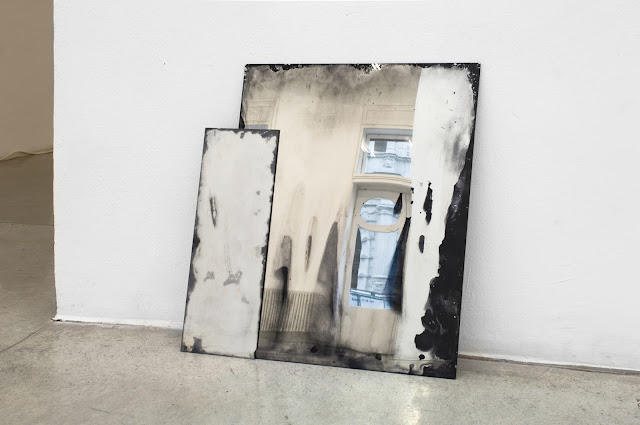 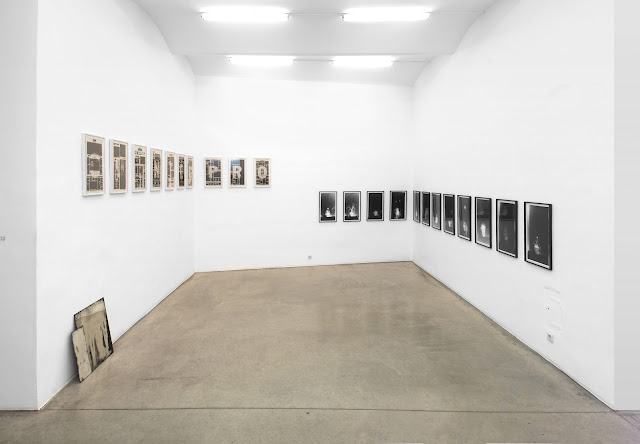 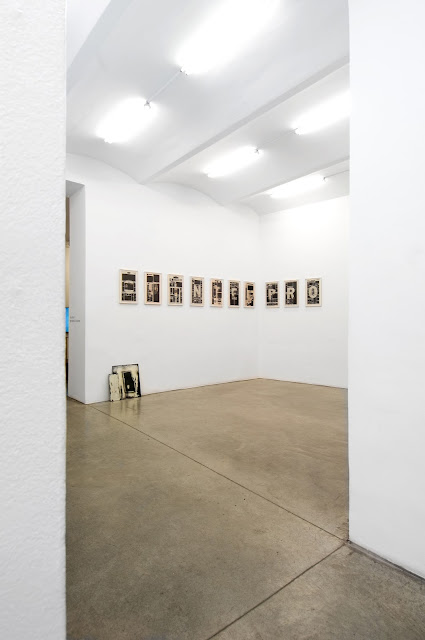 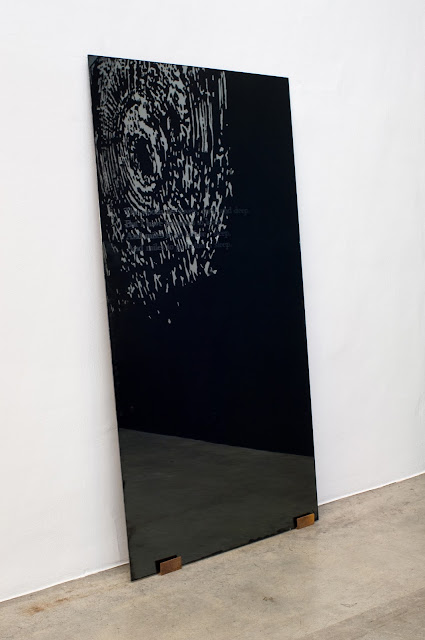 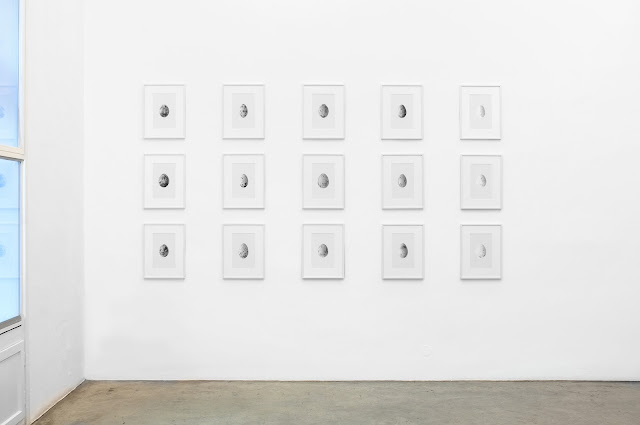 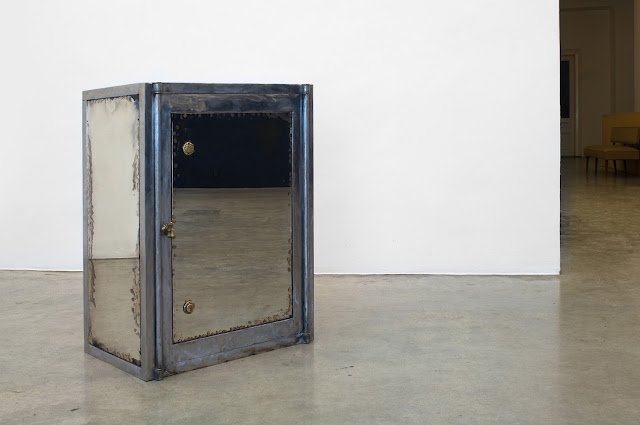 The photographs, drawings, objects and installation pieces featured in Andreas Duscha’s ﬁrst one-man show at the Christine König Galerie all make for a dismally dystopian composition in the rooms of the gallery. Against this backdrop, the artist’s central strategy emerges as a reﬂection on the medial character of the photographic production of imagery and the processing of signiﬁcant historical events as well as scientiﬁc or everyday/popular cultural phenomena.

The dark gray tone that prevails throughout the exhibition stands only in seeming contrast to the title ‘winning hearts and minds,’ a slogan taken from the US military strategy against terror – words that allude almost euphemistically to the policy of quasi-colonialist cooptation. As part of this strategy, long-term missions abroad are aimed at immediately drawing the civilian population, thereby from the outset minimizing the potential for terror on location. In this ambivalence, the basic theme emerges which Duscha deploys in the form of a loose associative web of meanings. It revolves around the phenomenon of the sleeper agent, the perpetrator that is usually religiously motivated and at a certain moment swaps his normal bourgeois existence for a meticulously prepared, but up until then hidden mode of a mass murderer. This agent’s “efﬁciency” or horror is greatest the more sudden and unsuspected this change takes place. The circumstances that trigger off his actions are thus subject to strict conﬁdentiality and often shrouded in codes. They can be concealed behind a poetic sequence like in the 1970s spy ﬁlm “Telephon” in which a poem by Robert Frost, which Duscha has etched onto a hand-made mirror, served to “call into action” a number of Soviet agents in the U.S. by means of a phone message. The perfection of disguise and the fact that it is impossible to distinguish the authentic elements from the alien surroundings as a central command is conveyed to a sleeper agent have an analogy in the animal world. Here it is the parasitic brooding strategy of the cuckoo, which is capable of adapting its own eggs in terms of size, shape, color and pattern to up to four different host eggs, which are presented by the artist in a similarly uniform grid of photographs.

Duscha disrupts the triviality of this frame of reference by offering an allusive parallel to the photographic dispositive, thus opening up a media-reﬂexive dimension of meaning in his works. The maximum contrast, the complete reversal from one state to another, from positive to negative, is typical of the sleeper agent but also of the photographic process. In the decisive moment, a programmed sequence unfolds but the outcome is uncertain. To see this as reﬂecting an identity of terrorism and photography wouldn’t make much sense and would certainly be off the mark. What interests Duscha are the enigmatic and incalculable aspects surrounding both the genesis of the sleeper agent and the photographic (in particular, the analogous) development of imagery. When and under what conditions someone becomes radicalized and goes from being an ordinary citizen to a sleeper agent and then terrorist can be related to the ‘punctum’ of photography as deﬁned by Roland Barthes: “The punctum of a photograph is what is haphazard about it, what strikes (but also wounds, hits me).” These are not the completely fathomable structures of a given apparatus which, on the one hand, turn any ordinary member of a society into a terrorist and on the other hand, transform an element of the everyday world into a part of a photograph, becoming the aesthetically decisive detail – the punctum.

The wall drawing next to the mirror recalls the immediate physical quality of both phenomena. It renders the shattered display of a cellphone that was damaged in the
explosion that took place in front of the Parisian Stade de France last November, just as a passerby was making a call. “The element which rises from the scene, shoots out of it like an arrow and pierces me,” can be related to Barthes’ notion of punctum and his theory of photography. The metaphorical play between levels of meaning assumes its greatest presence in the historical safe of the traditional Viennese manufacturer Wertheim, which, as was once common practice, subjected to a ﬁre test. It is an enormous cube made out of steel which keeps the contents under wraps – a massive, steel ‘camera obscura’ in which the impenetrable and indestructible nature of fascinating photography at the heart of Andreas Duscha’s work takes on concrete form.
Text: Maximillian Geymueller