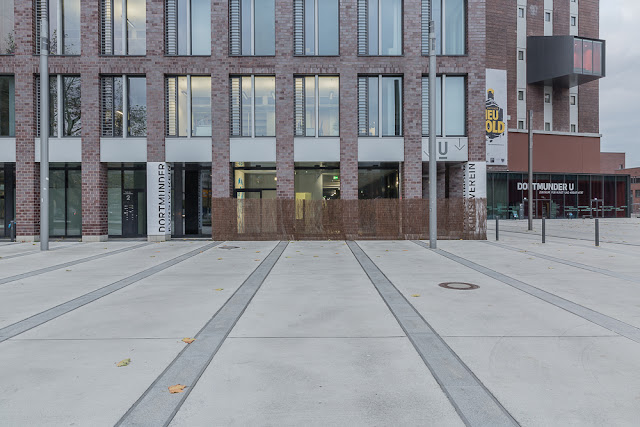 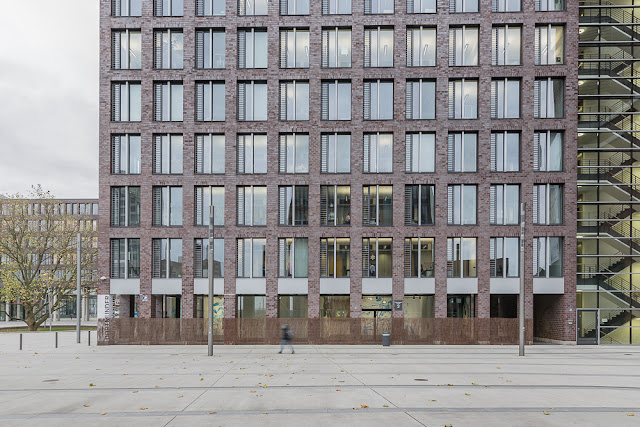 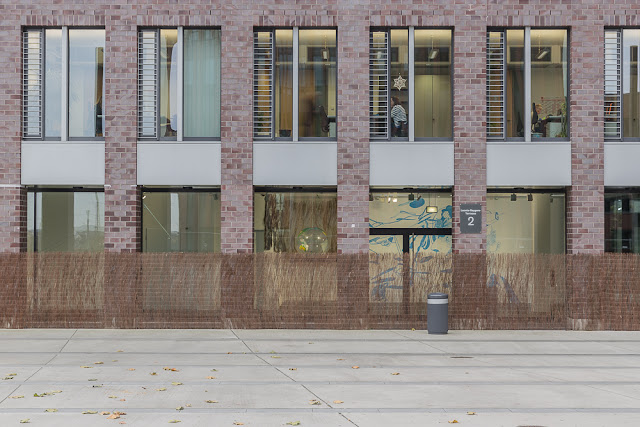 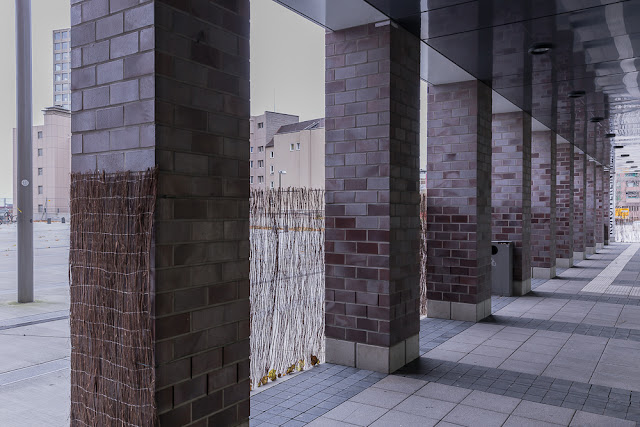 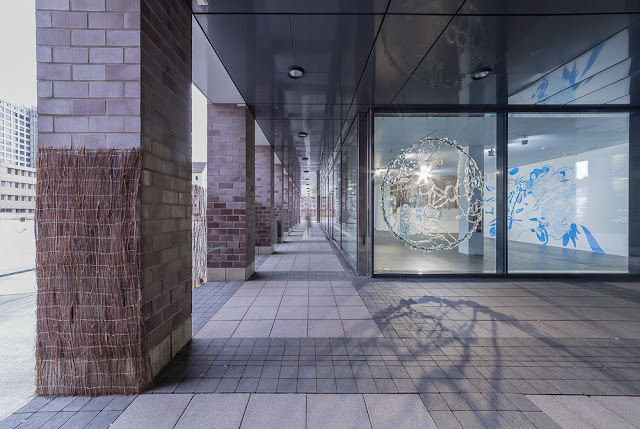 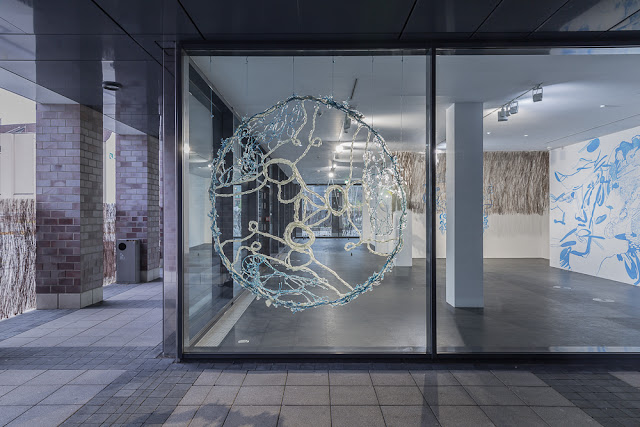 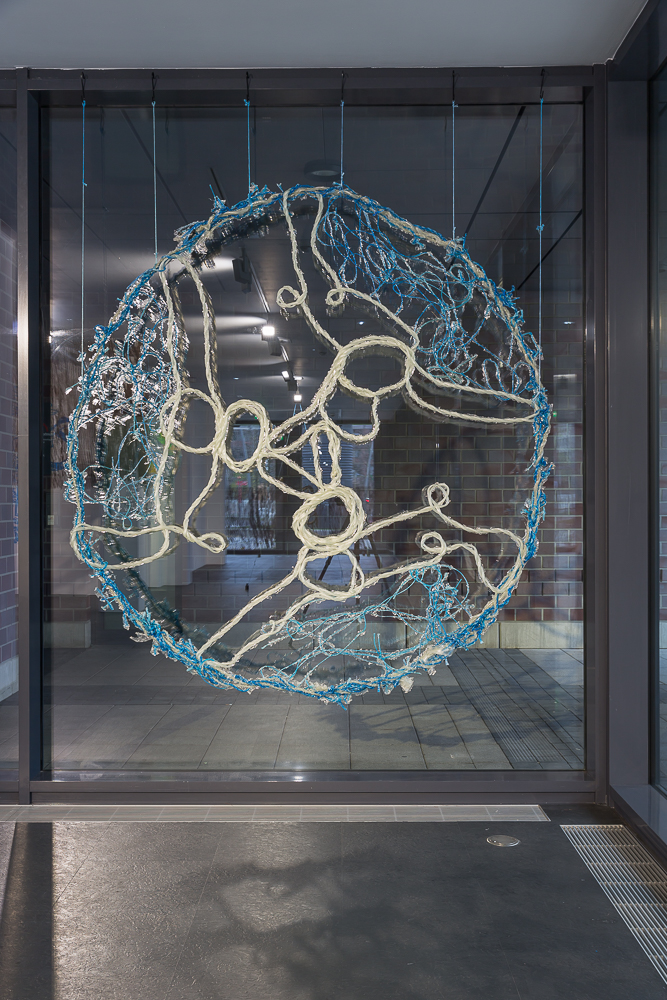 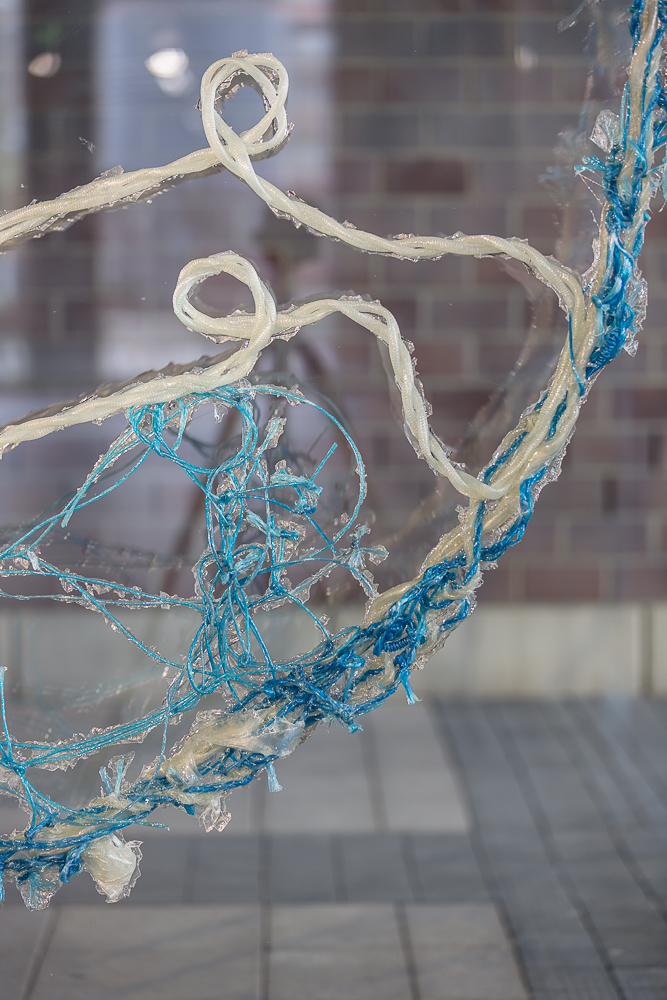 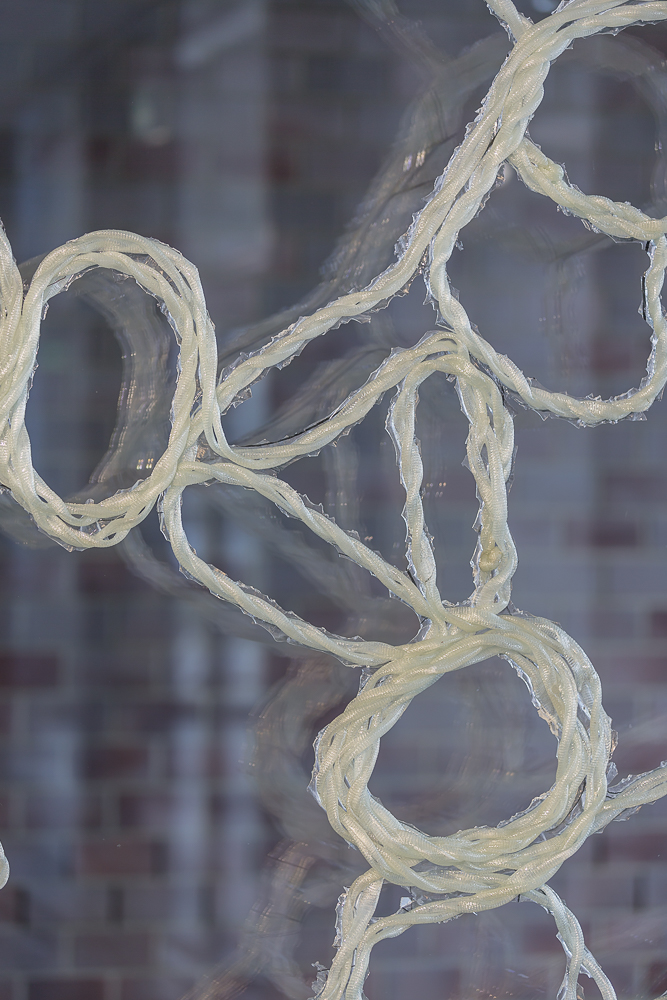 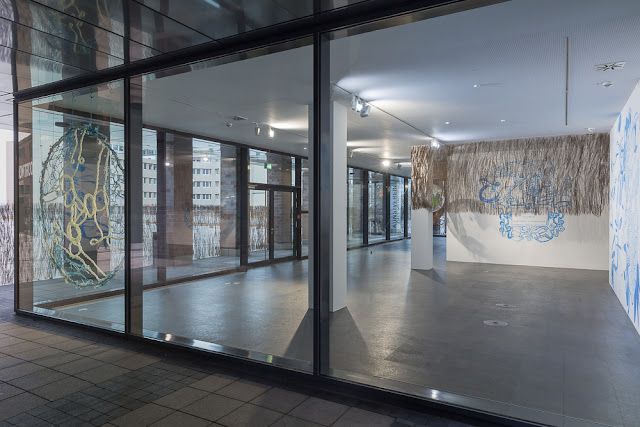 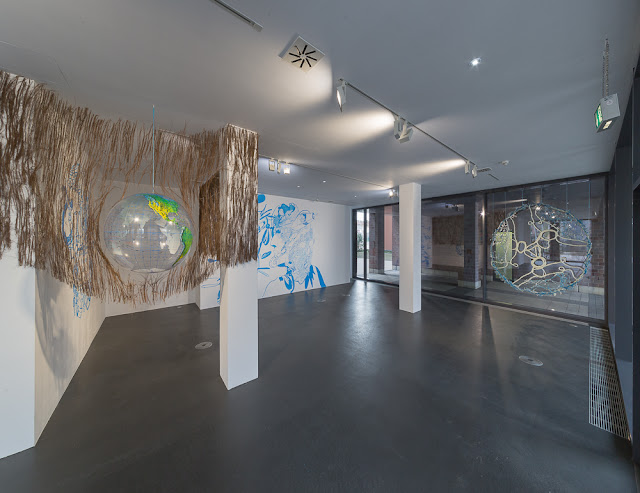 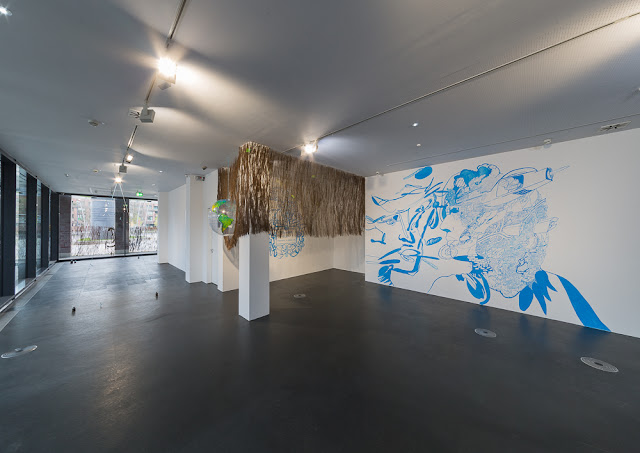 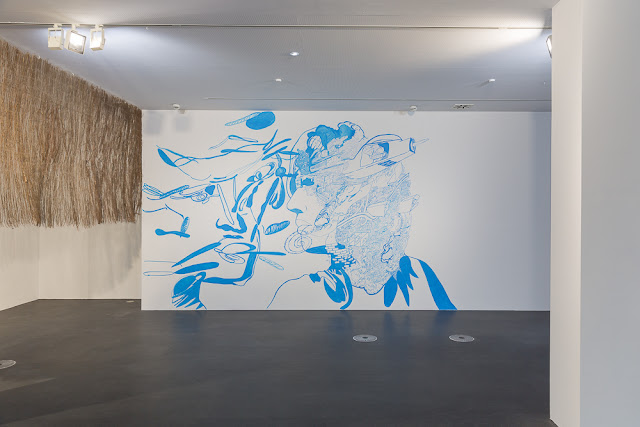 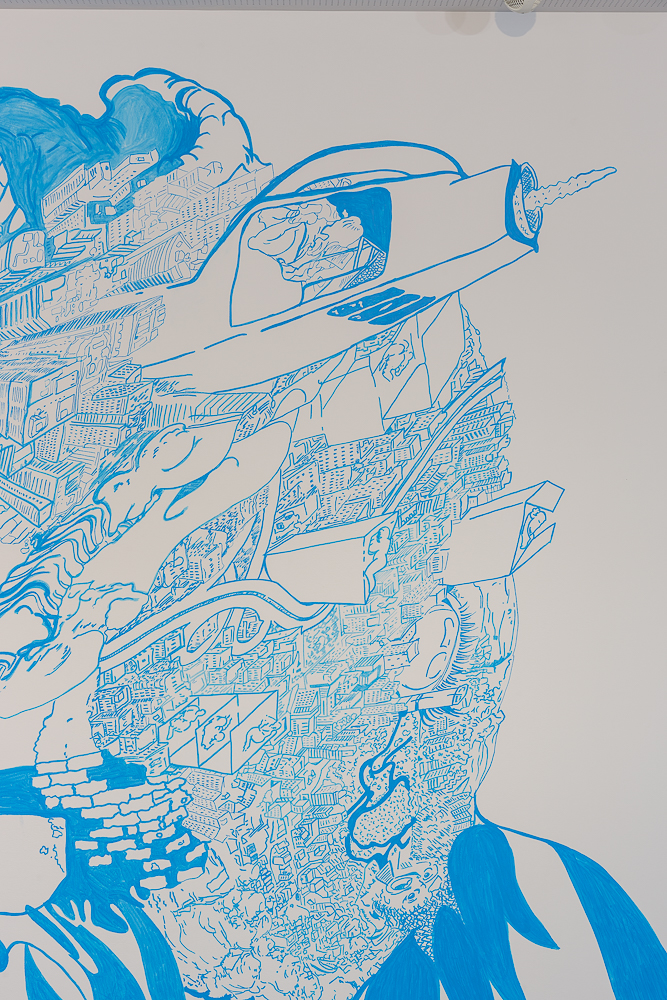 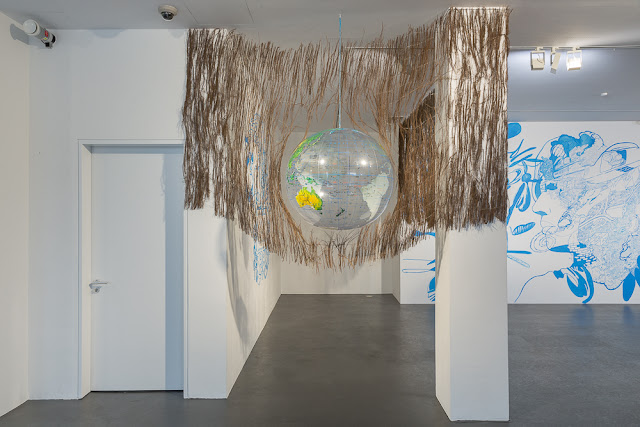 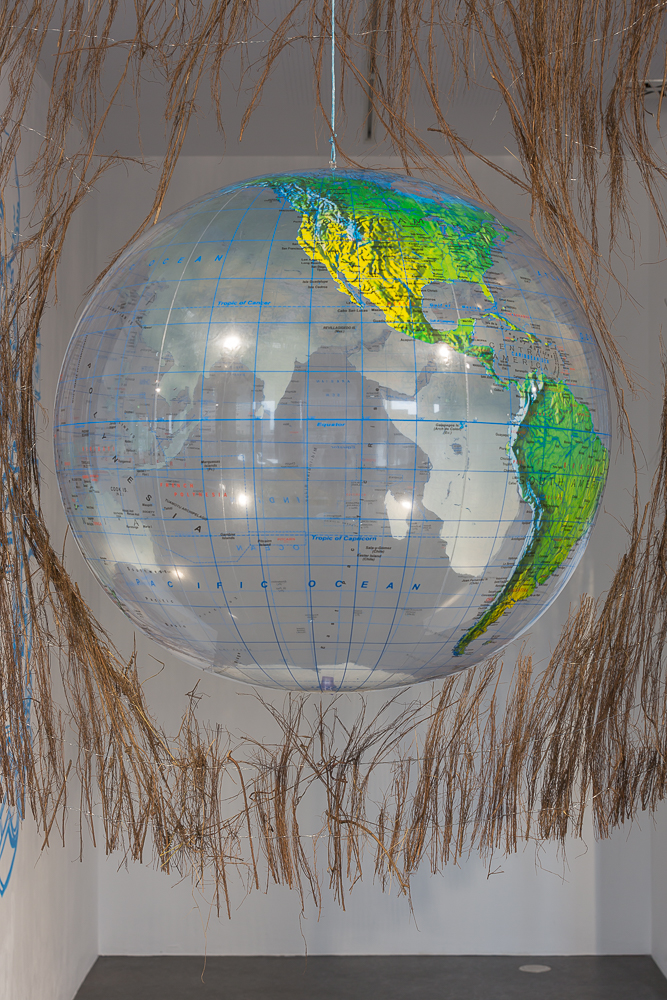 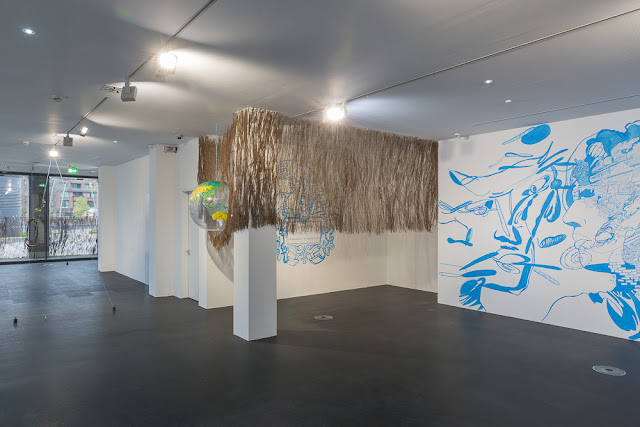 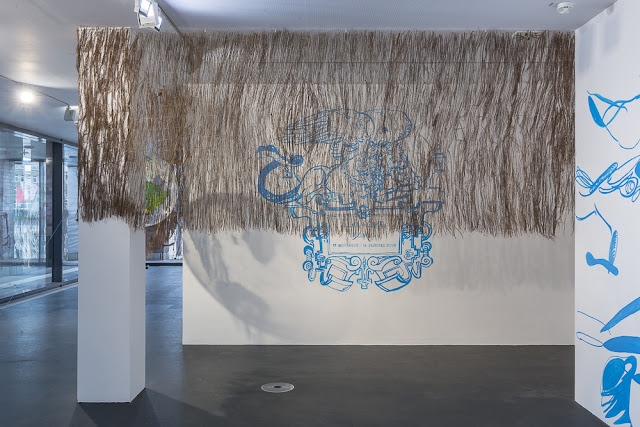 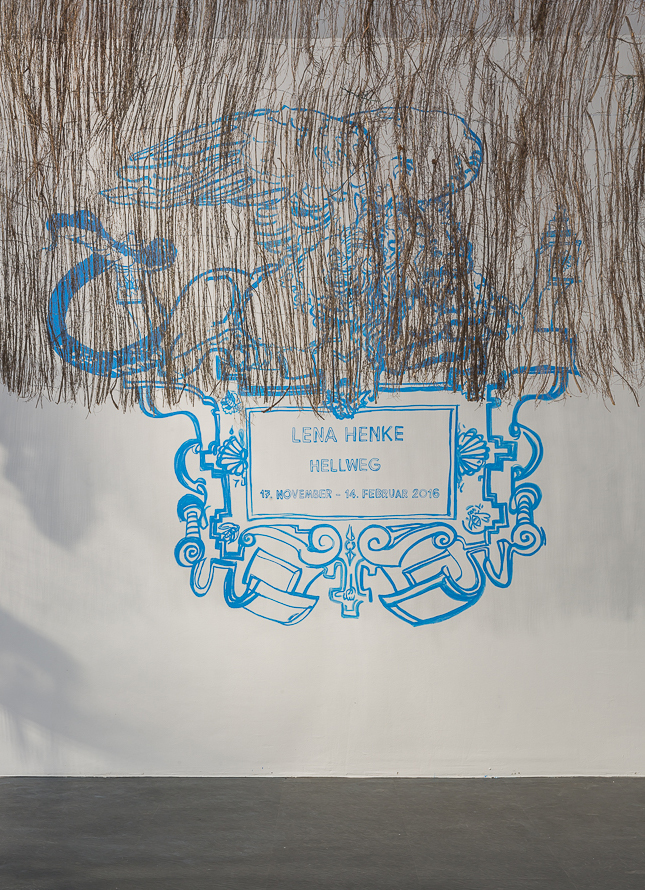 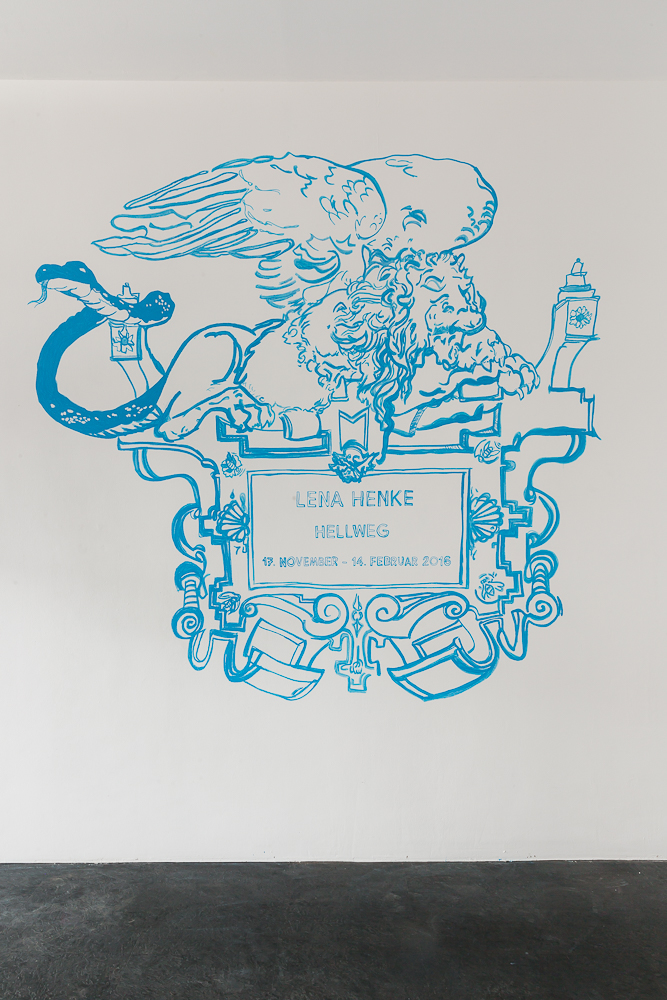 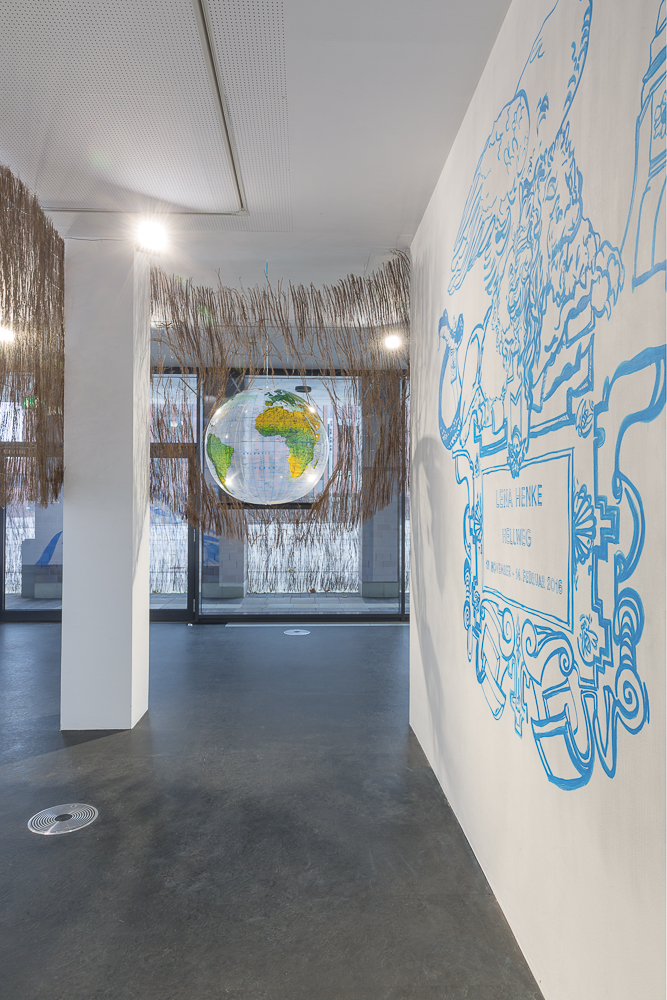 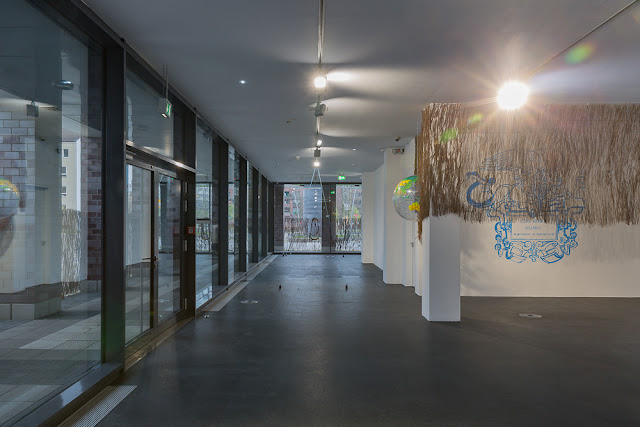 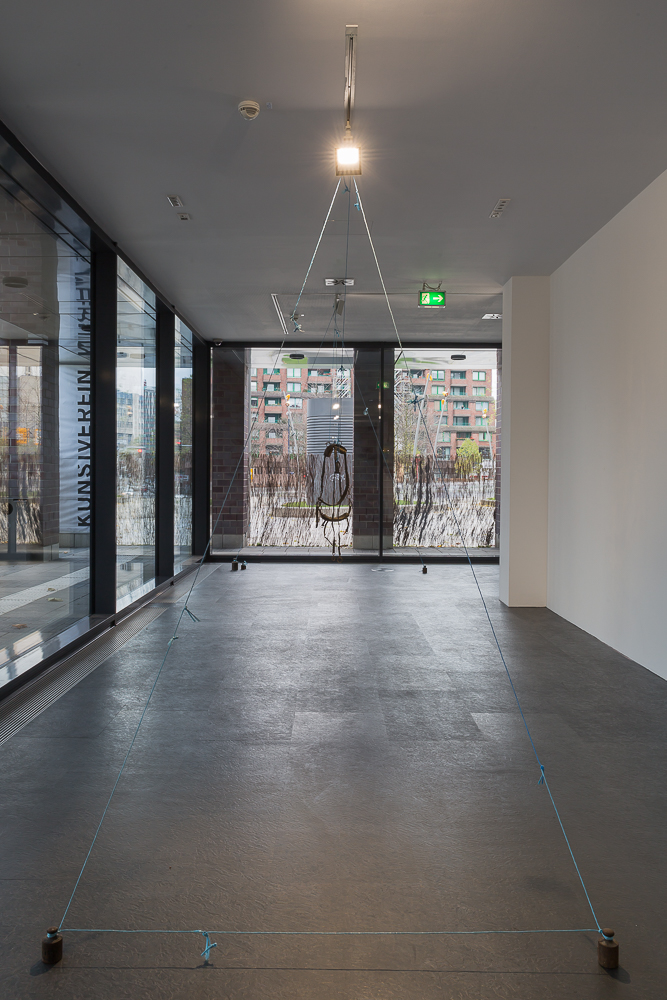 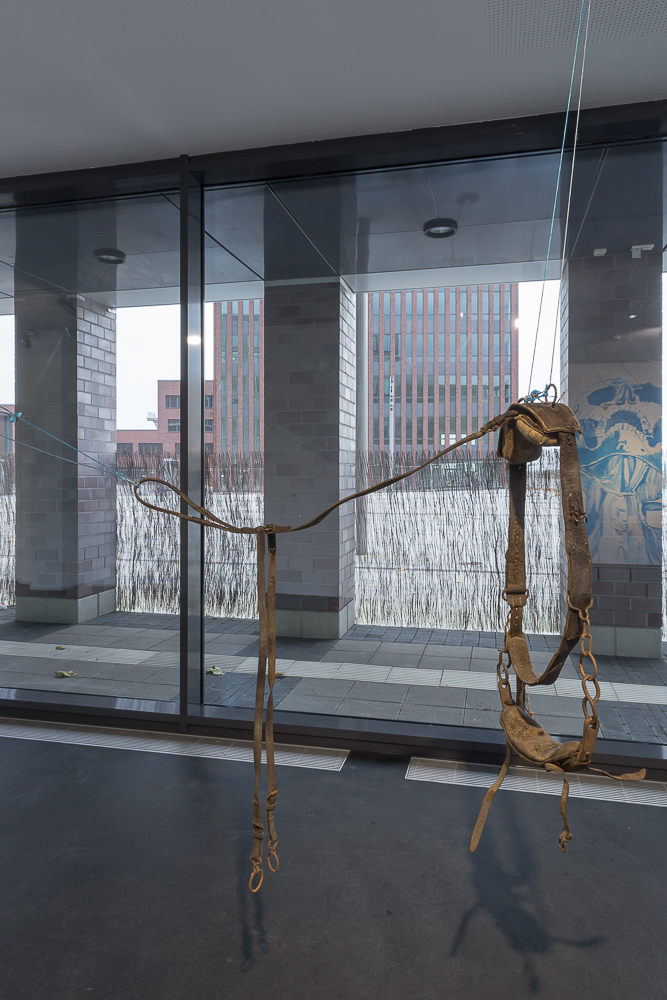 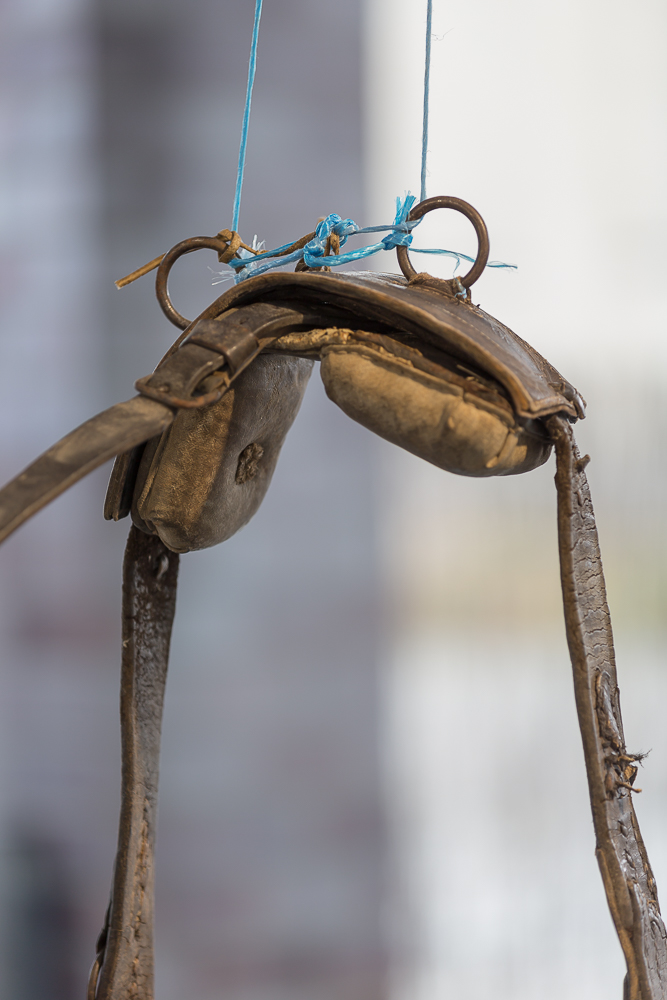 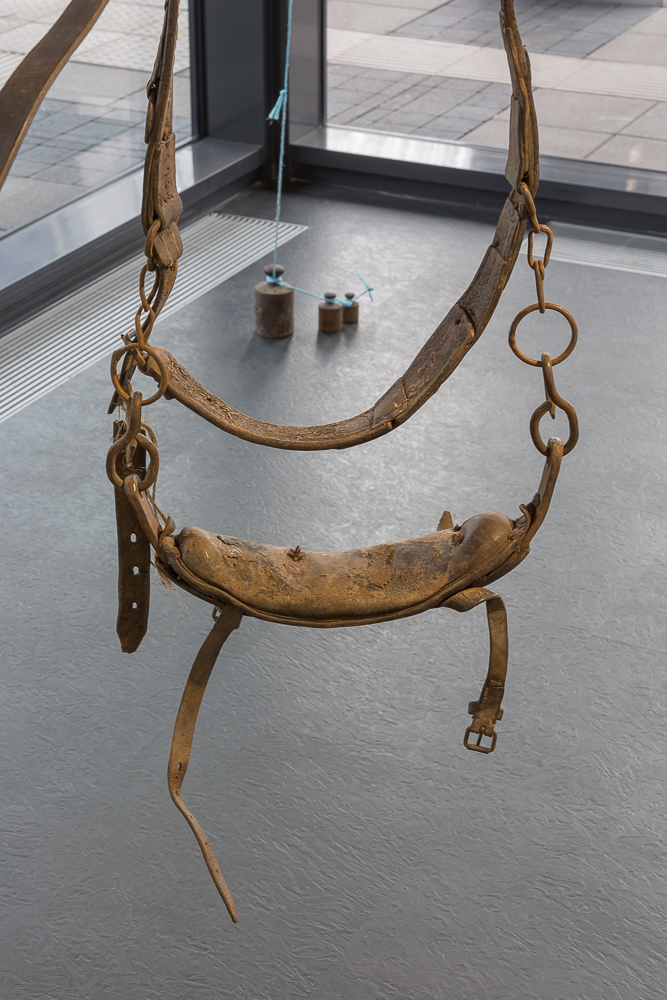 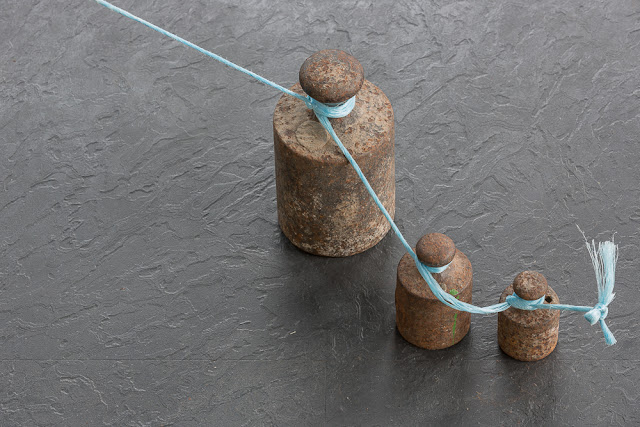 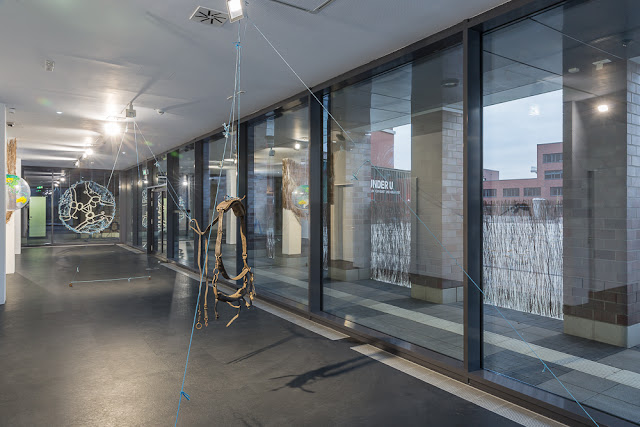 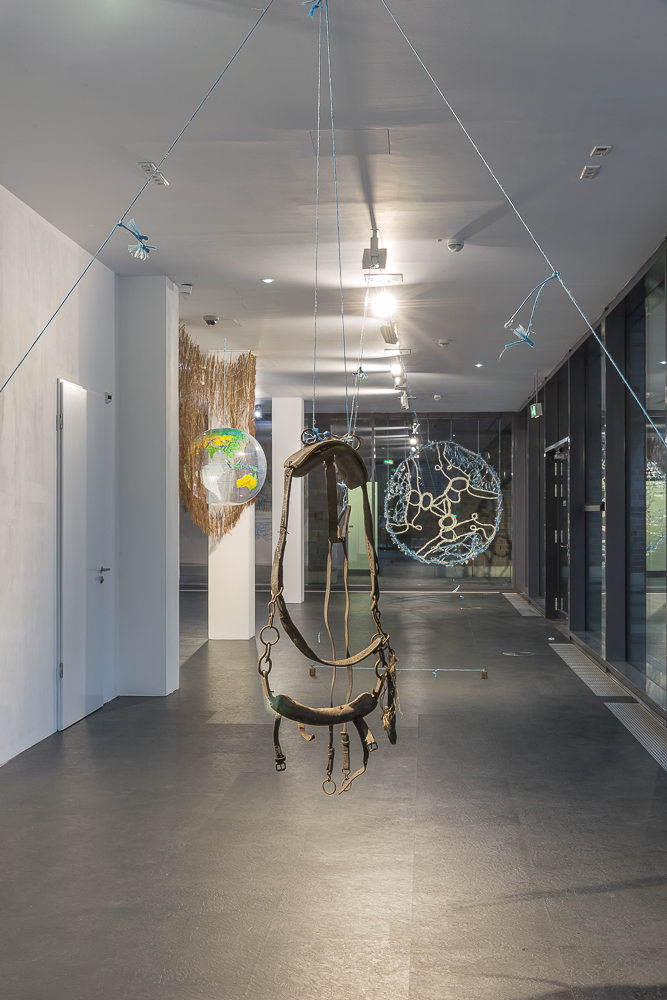 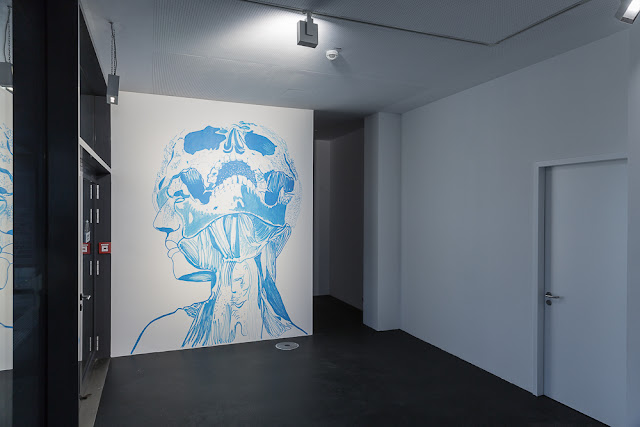 Within a few years, Lena Henke (born 1982 in Warburg (GER), lives and works in New York City and Frankfurt am Main) developed a diverse complex of works, consisting of sculptures and installations. As laureate of this year’s GWK advancement award for fine arts, she designed new works exclusively for the Dortmunder Kunstverein, equally inspired by her Westphalian background and her adopted home New York. Between personal mythology and geographic observations, her exhibition “Hellweg” is asking the question of positioning one’s own self.

The title „Hellweg” refers to the most substantial medieval traffic and trade route of Westphalia, extending from Duisburg via Dortmund and Paderborn up to Corvey. Lena Henke extends this path, leading through Dortmund’s inner city 50 meters away, into the outdoor space of the Kunstverein’s building. A fence made of brushwood and wire extends the vitreous exhibition space outside onto the public square around t he Kunstverein and leads the visitor to a new entrance.The fragile and transparent fence is reminiscent of a membranous skin. The bound brushwood forms a tunnel – just like in the animated children’s series “Once upon a time... Life”, the visitor is enter ing a body and the mindscape of Lena Henke.

On the central wall of the Kunstverein, a painted adaption of Joseph Beuys’ drawing “Die Sprache” (The language) from 1953 overlaps with Henke’s painted facial features. Henke’s portrait shows a city map of Manhattan on the inside of her head and unites earlier works and references to Land Art and city planning. Just like a kiss, both faces blend into each other. The work titled “Kranke und Touristen” (Invalids and Tourists), 2015.

Another mural painting, the “Der Pilger” (The Pilgrim), 2015, depicts the fusion of the artist’s head as a kind of flip-flop image merged with a historic medicinal etching of a human skull. Comparable to a painted memento mori from the renaissance, it can be seen as a self-reflective motif of the awareness of one’s own mortalit y. Surrealistic images, in which buildings or objects become animated, like those of Madelon Vriesendorp or illustrations by Tomi Ungerer and Claire Bretécher are an important inspiration here. The sculpture „Dreihasenbild“ (Three hares picture), 2015 pertains to the Dreihasenfenster of the Paderborn cathedral. Three rabbits, jumping in a circle, share one ear each in order to chase the time in a circle. The rabbit, bearer of various meanings in all kinds of religions, can be an incarnation of reincarnation and resurrection as well as of fertility. Henke however, sees more of a story that combines the universal with the personal in form of an individual mythology. Together with the mural paintings, the brushwood fence and an extensive installation of an antique horse’s harness, Lena Henke creates a mind map of her interests in “Hellweg“. This organism dissolves the boundaries between body, animals, architecture and urban landscape.