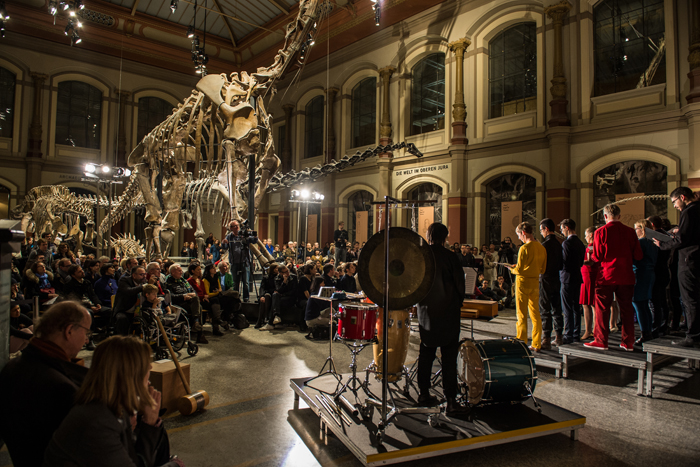 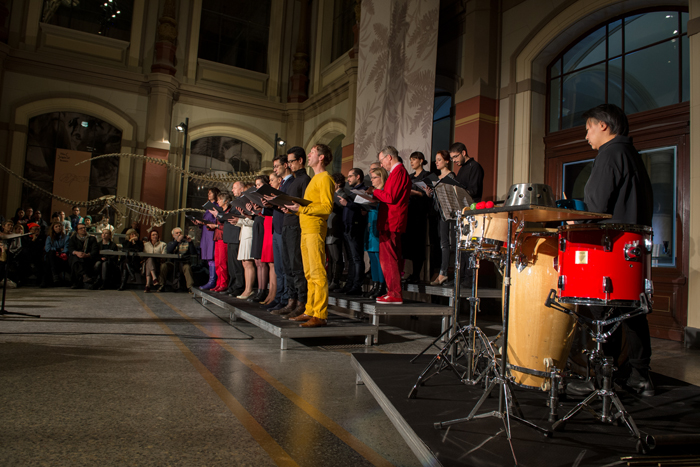 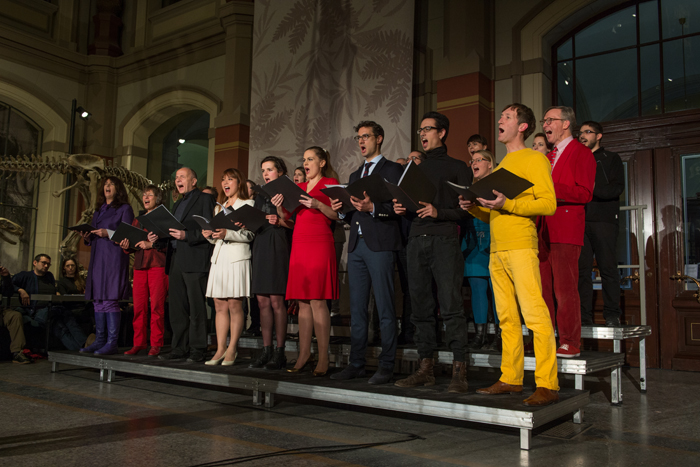 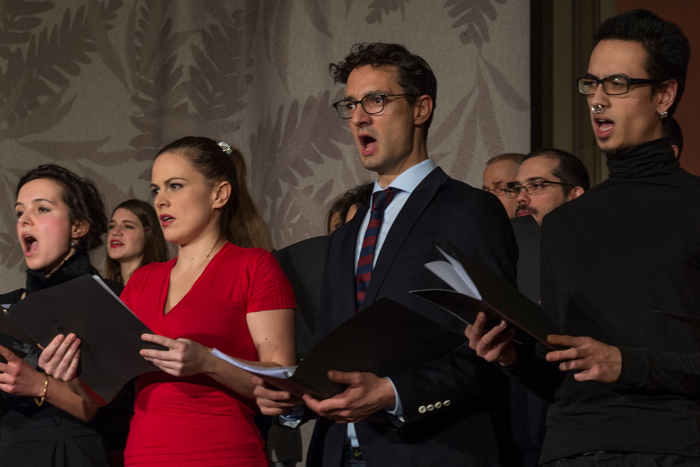 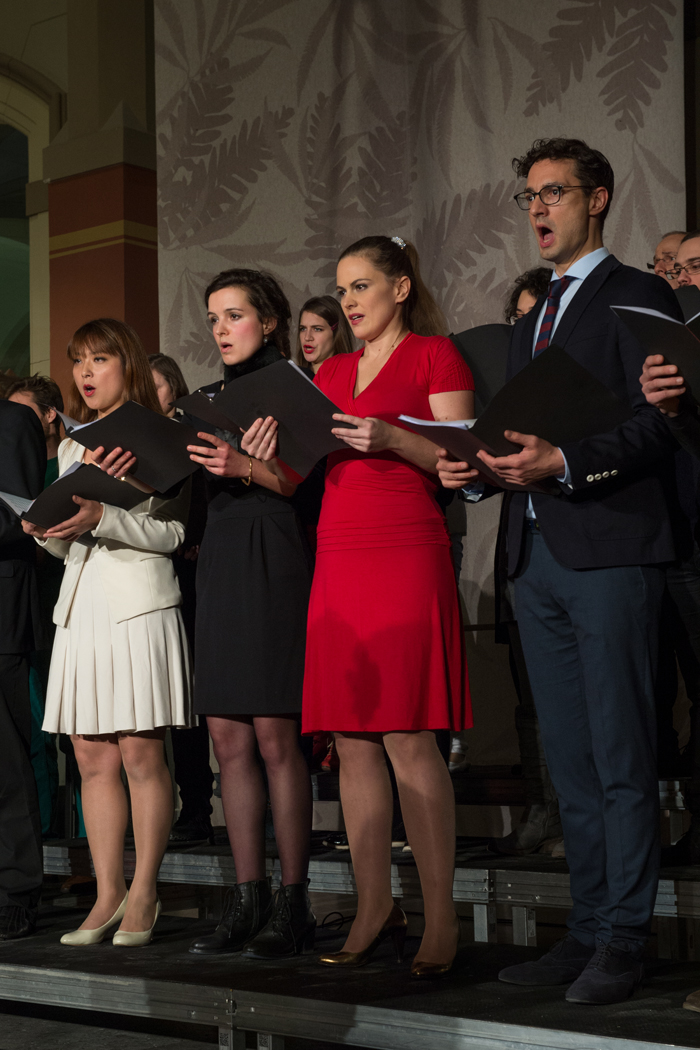 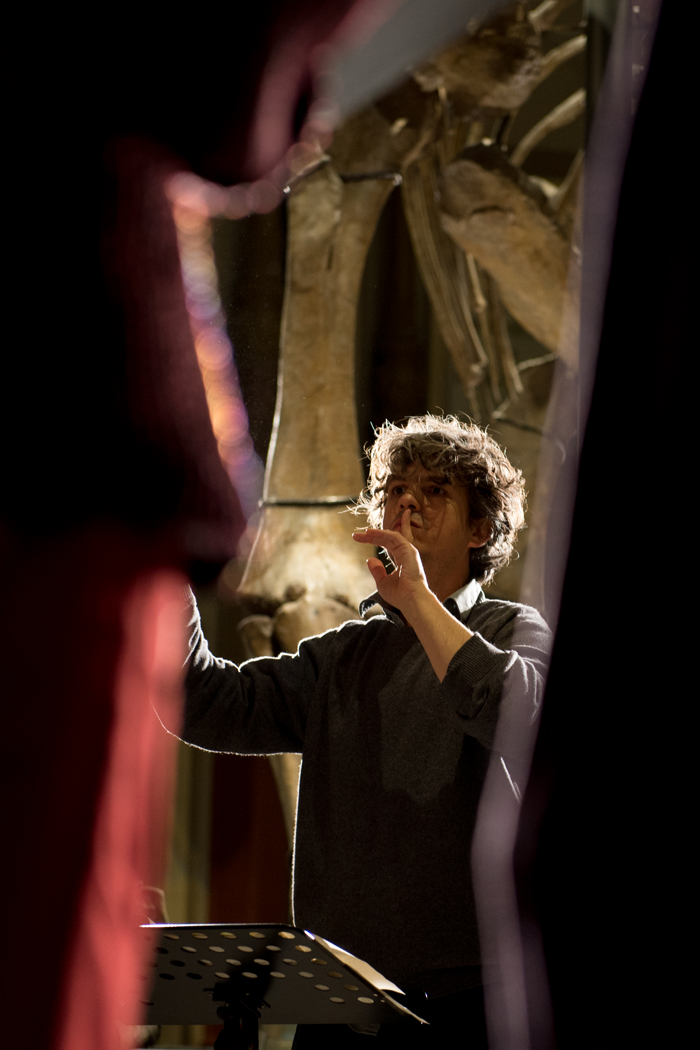 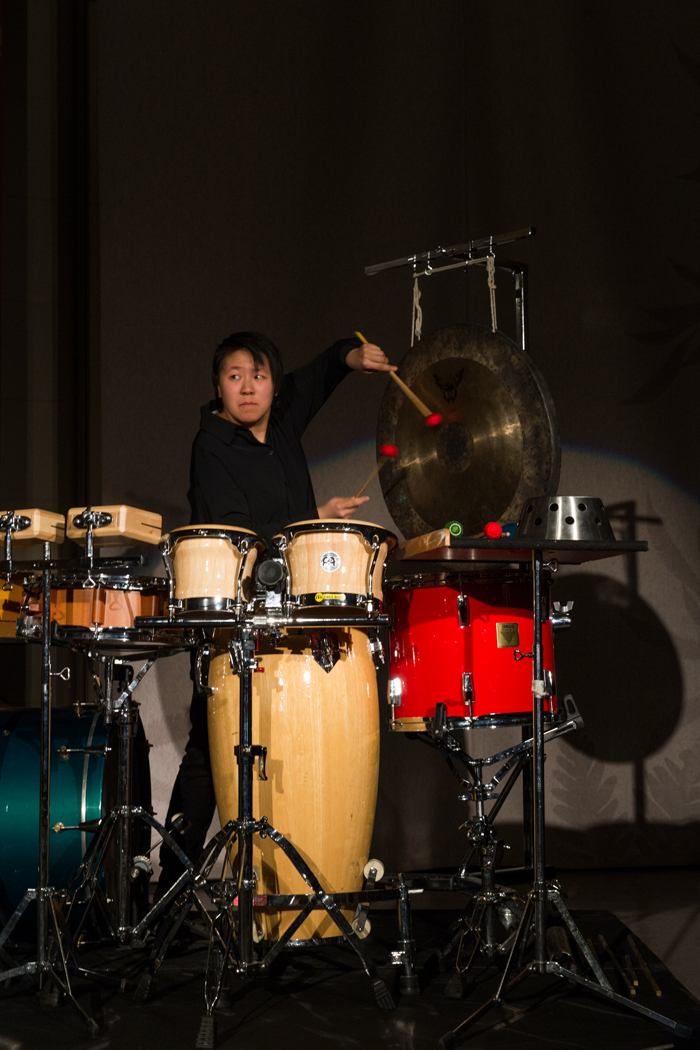 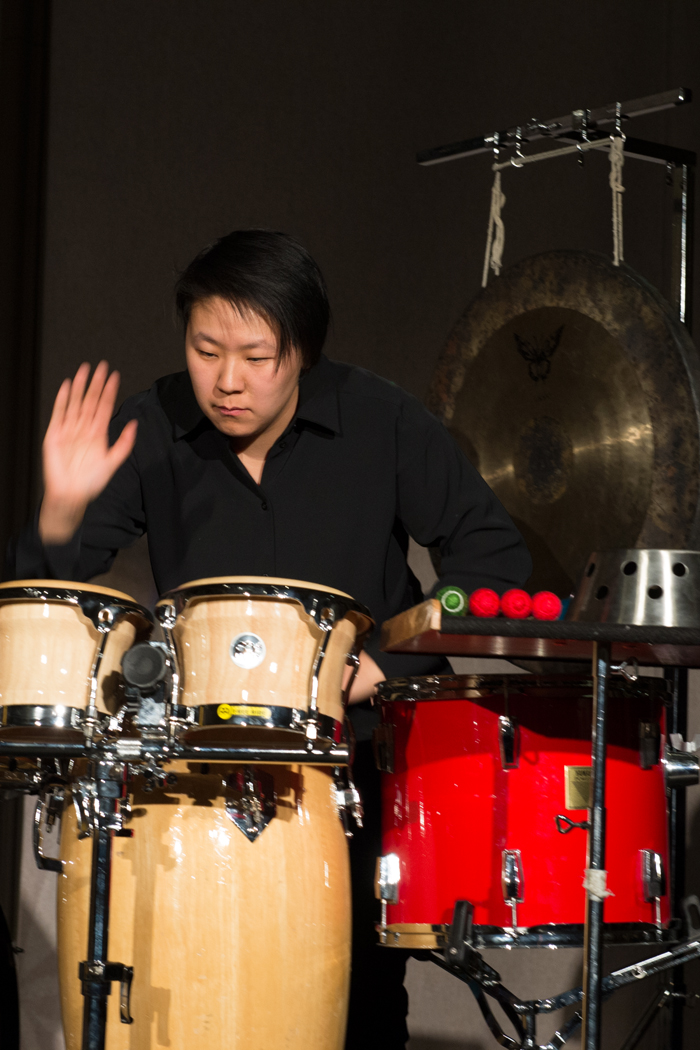 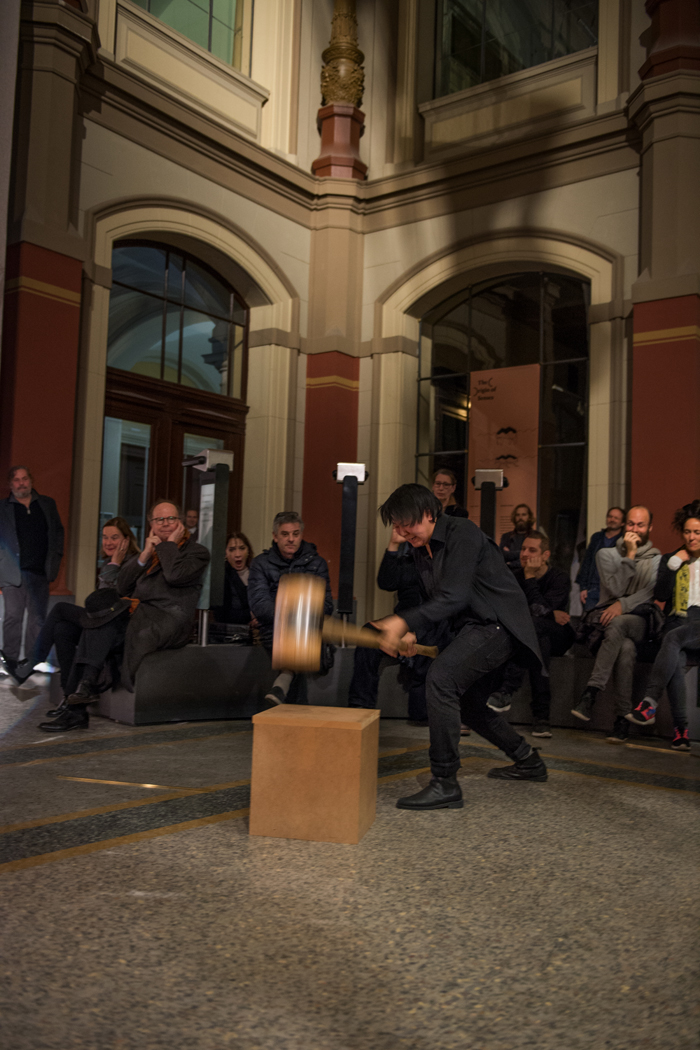 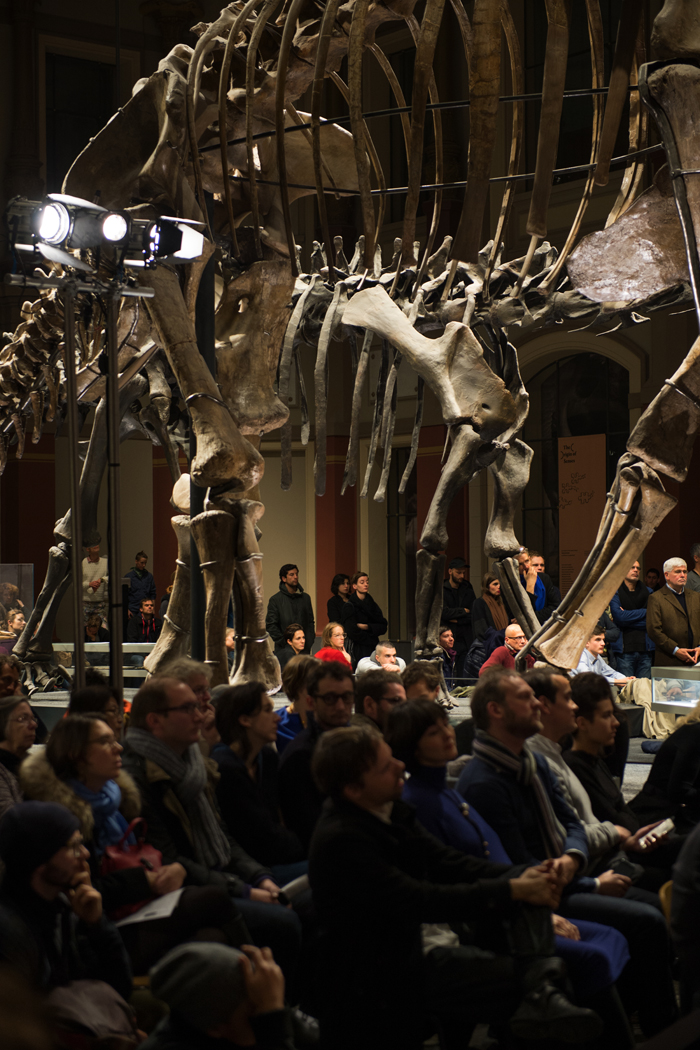 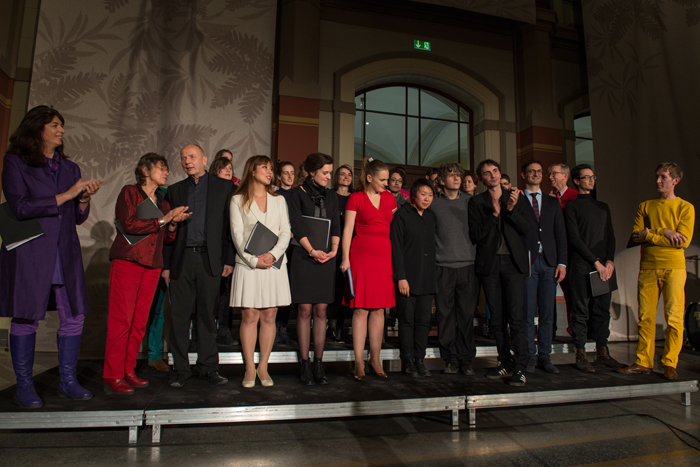 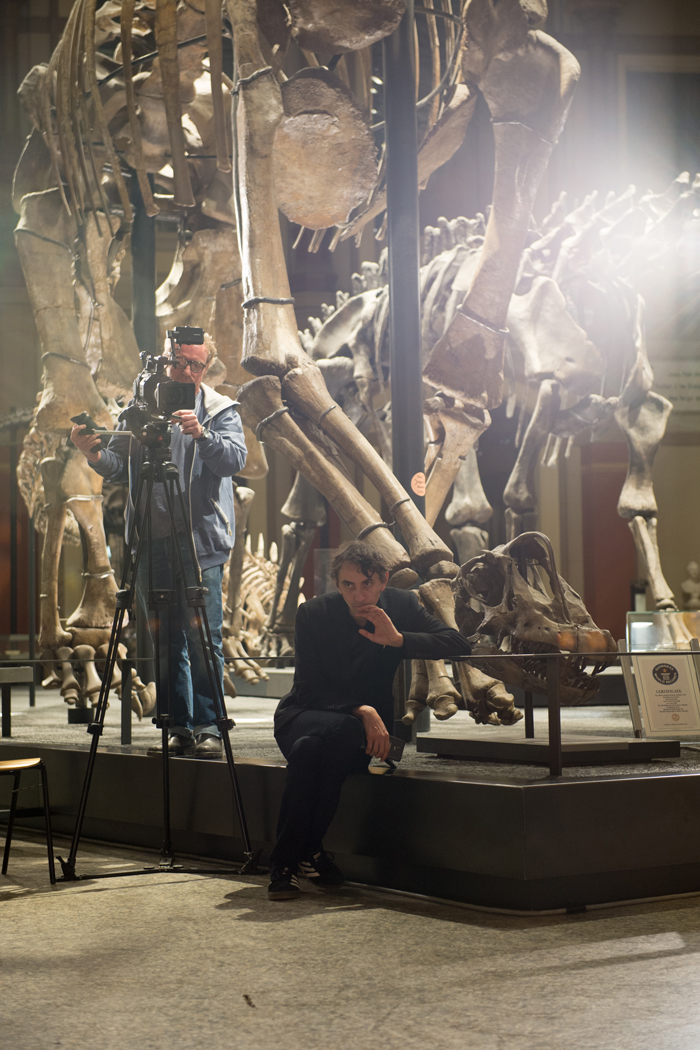 Das Ende der Welt is a performance directed by Saâdane Afif. It takes the form of a musical piece for vocal ensemble and drum commissioned by the artist to the composer Augustin Maurs. The result will be played on November 29 at 7:30PM, in a unique concert: a grand finale to close the process of Afif’s intervention in the dinosaur hall of the Museum für Naturkunde Berlin. Das Ende der Welt is part of the round of artistic interventions initiated by the Museum für Naturkunde Berlin with the German Federal Cultural Foundation, all within the framework of the model project ART/NATURE.
With Das Ende der Welt, Afif underlines this parallelism between the real world and the studied world. One becomes a metaphor of the other to question the fragile destiny of mankind and nature. From this peculiar site – a museum of natural history – Afif chose to reflect on the disappearance of the world by announcing its end. Between 27 August and 29 November 2015, Afif displayed posters in different locations in the Museum, announcing – with a certain touch of irony – the end of the world. However, in this case, Das Ende der Welt will only be a piece of music performed in the main hall of the museum.
The brief of Afif’s commissioned work to Maurs was to “compose a musical piece for vocal ensemble and percussion as if the action were set a few moments before the end of the world”. Afif purposefully chose an encounter between a choir and a drum for his intervention. Inspired by the symbolism of Greek tragedy, the choir, a human collective that dedicates itself to a common action (namely singing), represents mankind performing its own ineluctable extinction. Meanwhile, the drumbeats stand for unchained powerful natural elements and the beats of time as it passes. The whole project acts like a contemporary vanitas work. Through this sensory device, Afif tackles the end of various worlds – but first and foremost the end of the human world and, by extension, the end of consciousness.