Antoine Donzeaud Feat. Micah Hesse
Needless to say I have some unusual habits 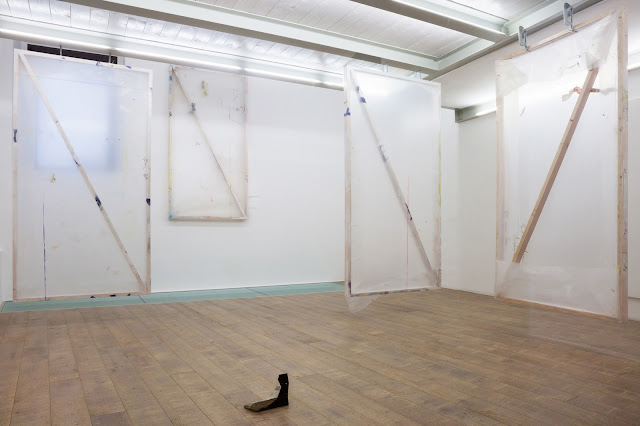 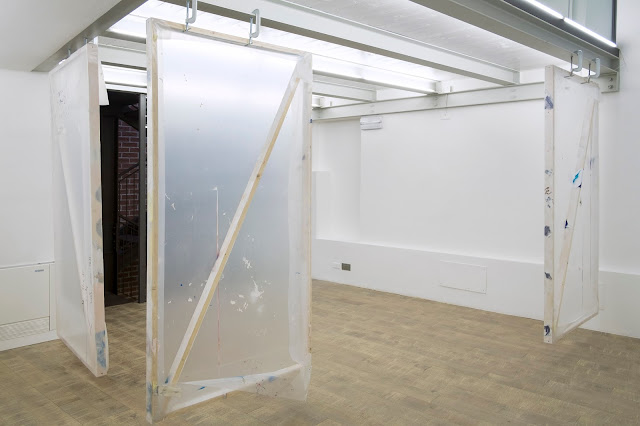 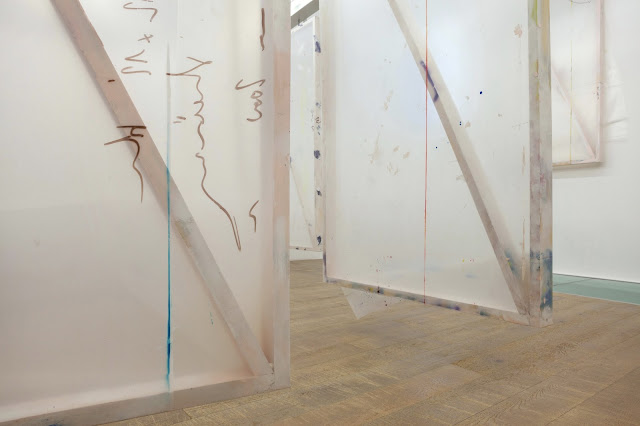 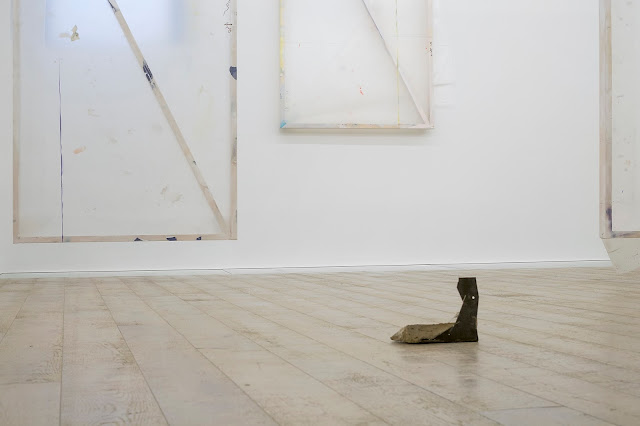 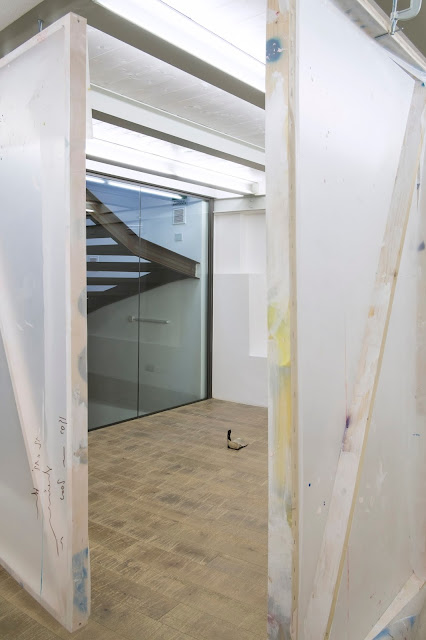 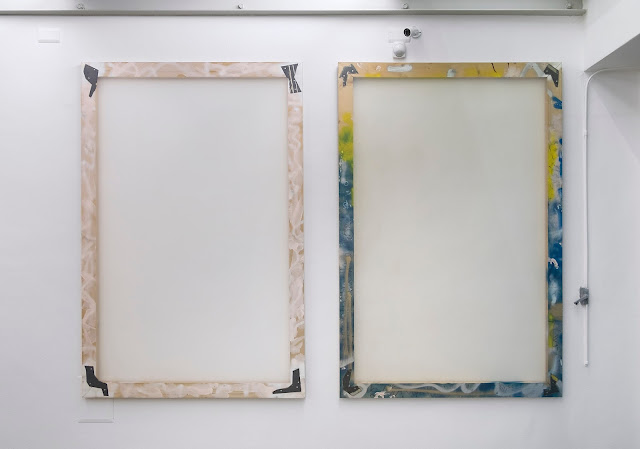 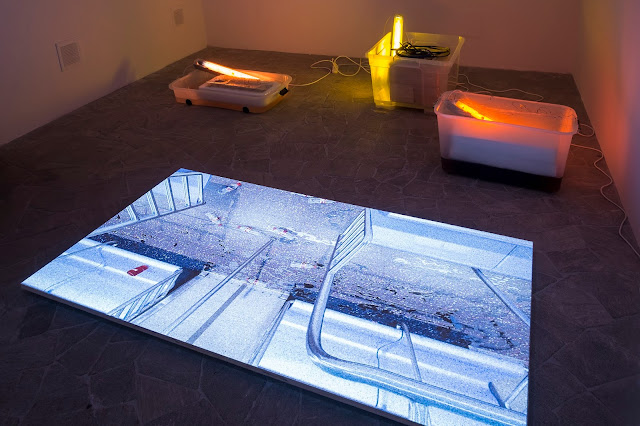 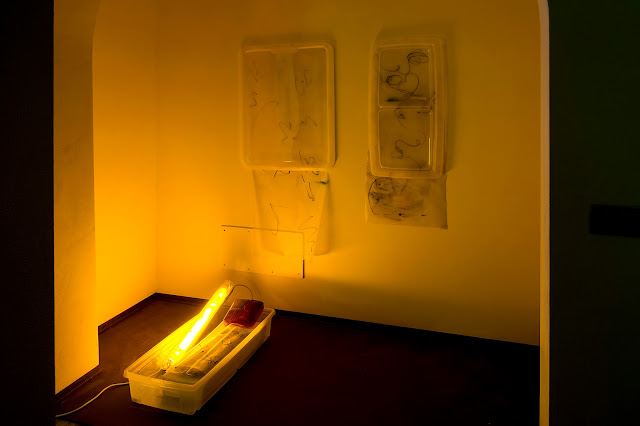 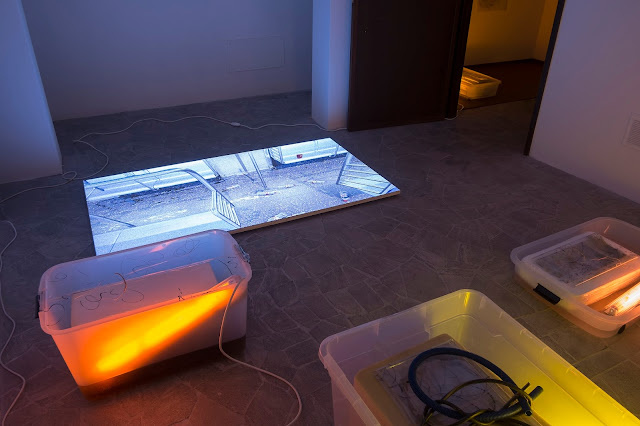 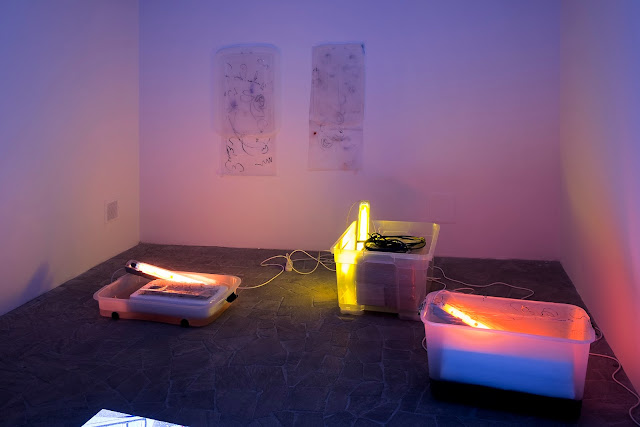 For this new exhibition, Antoine Donzeaud chooses not to use figuration. His works thus retain a formal freedom and are nevertheless imbued with narrative fictions. The staged sets he offers, just like the title of the exhibition, are all signs from which the viewer can construct a narrative.
“Needless to say I have some unusual habits” is the line of a fictional character: Dexter Morgan, the collector serial killer in the eponymous series Dexter. There is a very close formal link between the modus operandi of said serial killer – whose favorite material is transparent plastic sheeting – and the artist, whose exhibition tends to offer a dissected and exploded vision of his work.
The layout of the Rivoli2 Foundation’s space over three floors offers an ideal configuration which reinforces the proposal of a sequenced exhibition. Like a “decomposed action painting” Antoine Donzeaud develops an interpretation of his art in three chapters: genesis, making and presentation – and showcases the different production stages of his works being careful nevertheless not to favor the only physical act of their creation.
In the basement, the work is in preparation, takes on sustenance, is impregnated and begins to take shape. Basic elements of the artist’s vocabulary are gathered together like a primitive form of incubation: clear folded protective sheeting is floating in plastic tanks.An atmosphere of expectation is created with subdued lighting and the dissemination of a looped video by Micah Hesse which horizontally scrolls through a New York subway line where the floor is littered with empty plastic Coke bottles rolling around and spilling all kinds of fluids.
The ground floor houses Loop Painting, an installation in which a painting from the Untitled PE series is presented in its final stage of production. The Untitled PEs make the production of the painting and the construction of the chassis a mise en abyme. The transparent polyethylene sheeting used to protect the floor from paint splashes when the chassis was built becomes the canvas itself, causing the creation of the container and contents to be done simultaneously.
During final assembly, the sheet is placed on the chassis, paint on the inside, and is stretched by the artist by means of a temperature difference. The studio protocol is here changed to permit observation of this final stage of creation on a continuous loop. The Untitled PE is lying horizontally on a table above radiators. When spectators enter the room, a motion sensor turns these radiators on and the heat loosens the sheets. When the radiators turn off, the plastic sheeting cools and returns to its original state.
The interaction with the viewer evokes the sonic sculptures described in “The Singing Statues” by JG Ballard ; the work seems to breathe like a creature in intensive care on an operating table. A way of saying that the history of painting is far from being written. Climbing the stairs, a new perspective opens up where you can see a wider view of the surface of Loop Painting. A series of Untitled PEs is also shown on the second floor, suspended in space, as if frozen in a new intermediate step.
Finally, on the last wall the finished work is hung vertically in a traditional way, like a transparent threshold that closes the exhibition and invites us to think about what might happen beyond. The whole installation marks the sequence of events and actions which leads to the artist’s creation of his pieces. Each area gives a snapshot as a kind of reinterpretation of a frozen moment in the creation process. The exhibition offers a space for reflection on contemporary painting. Each step it is composed of is staged to invite the viewer to adopt a distanced view of its purpose by playing on the principles of its presentation.
Text by Marine Brutti.