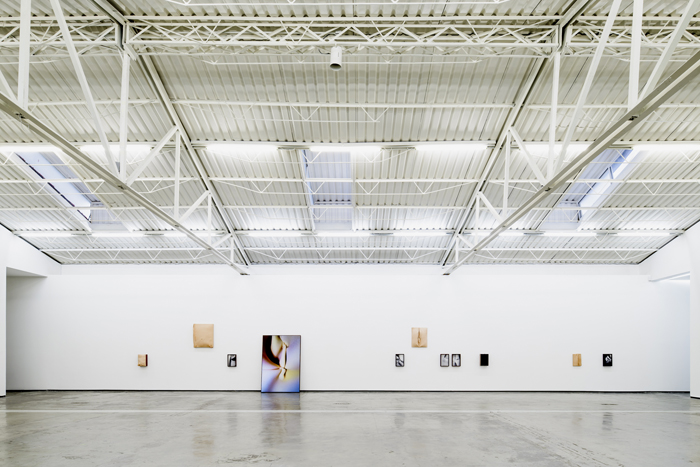 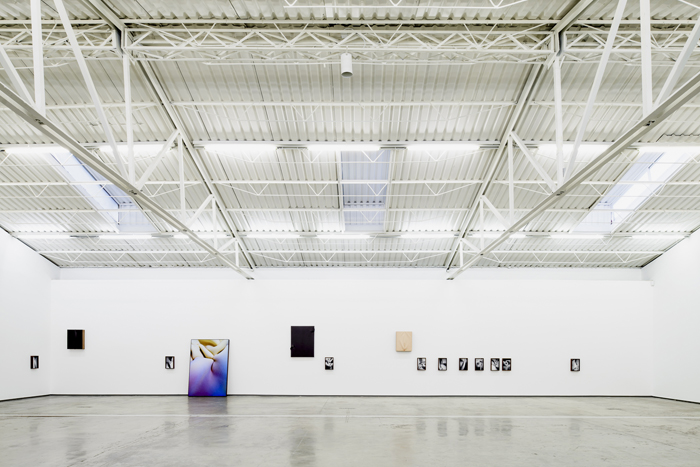 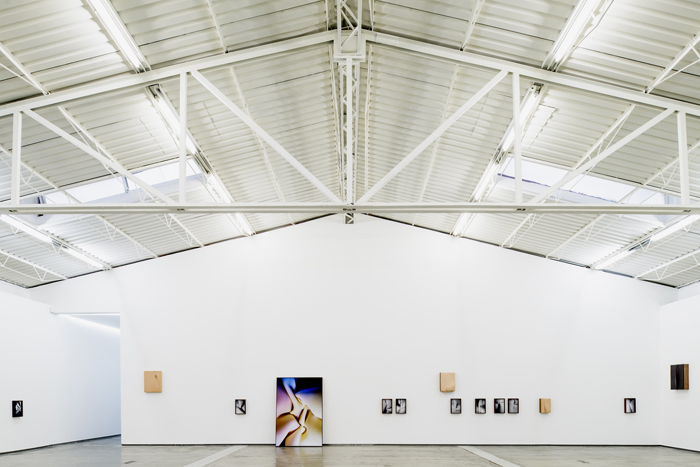 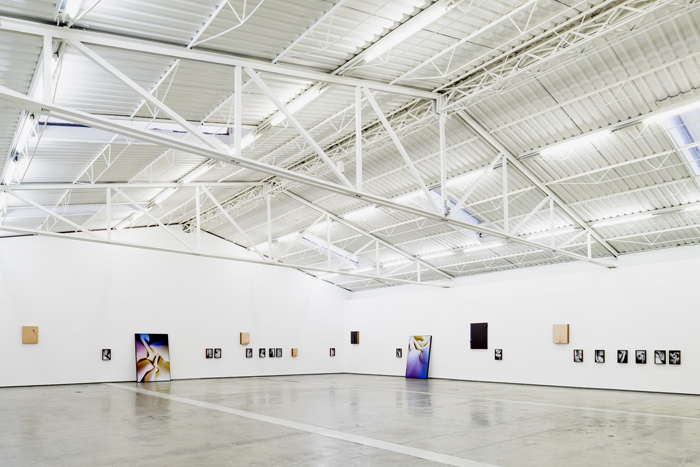 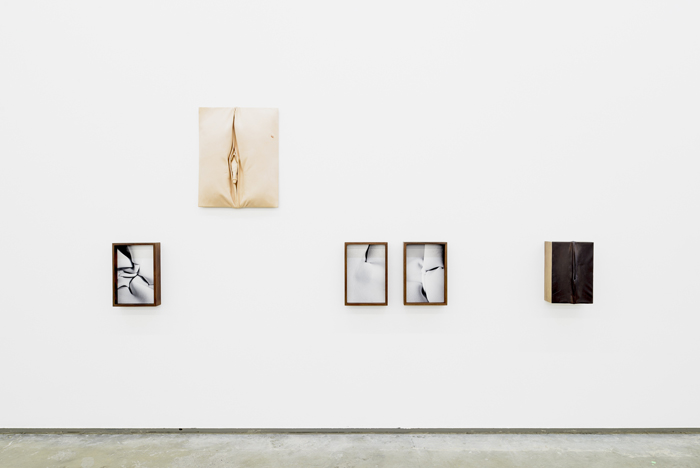 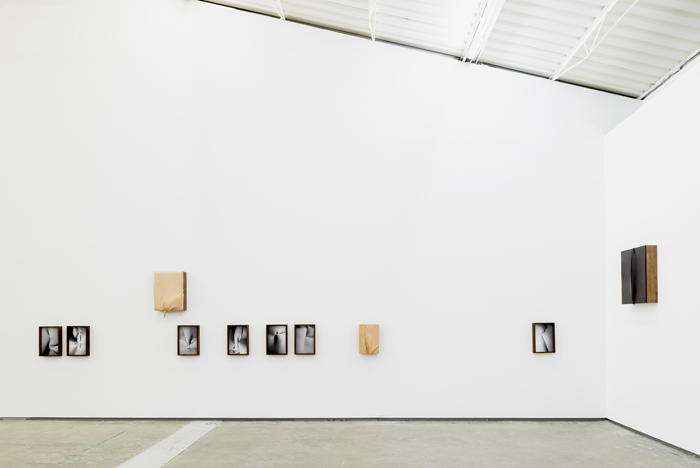 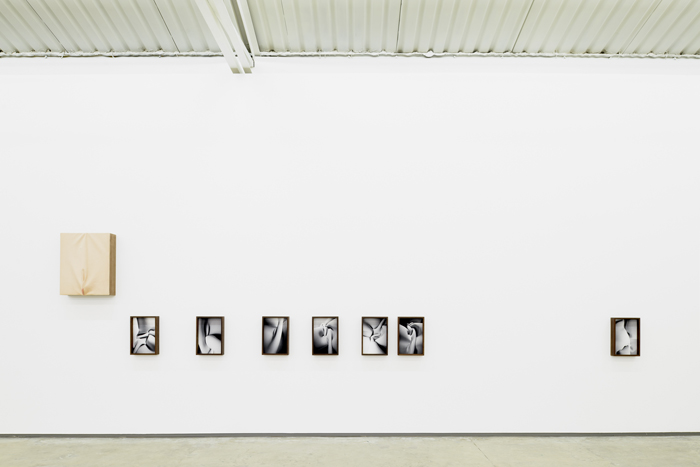 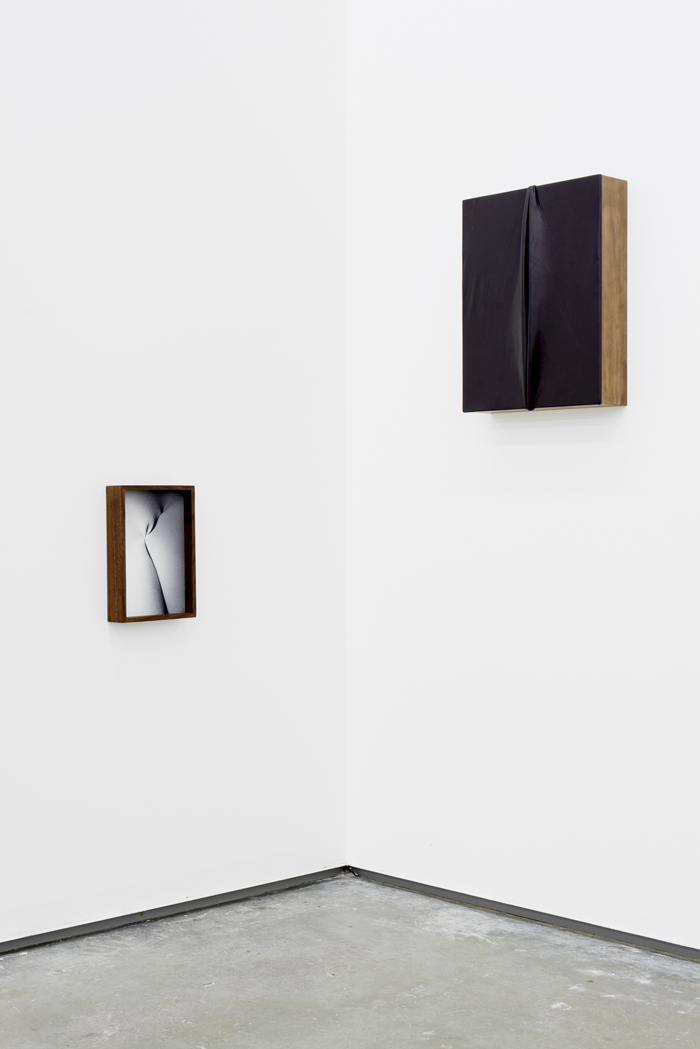 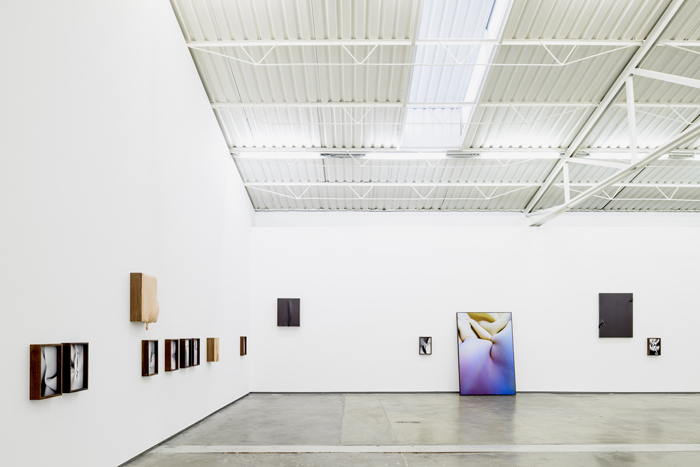 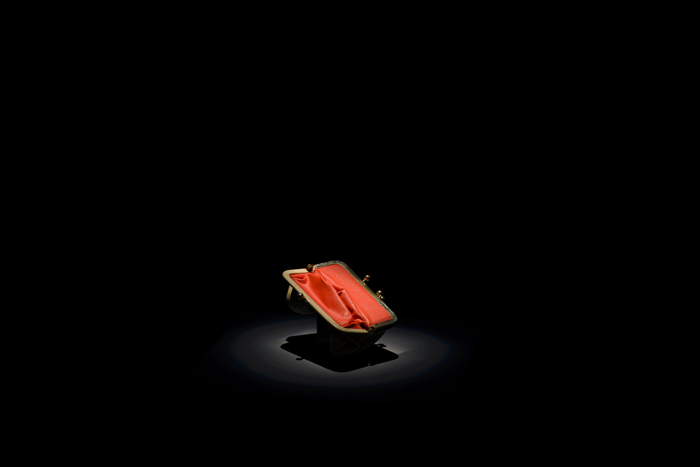 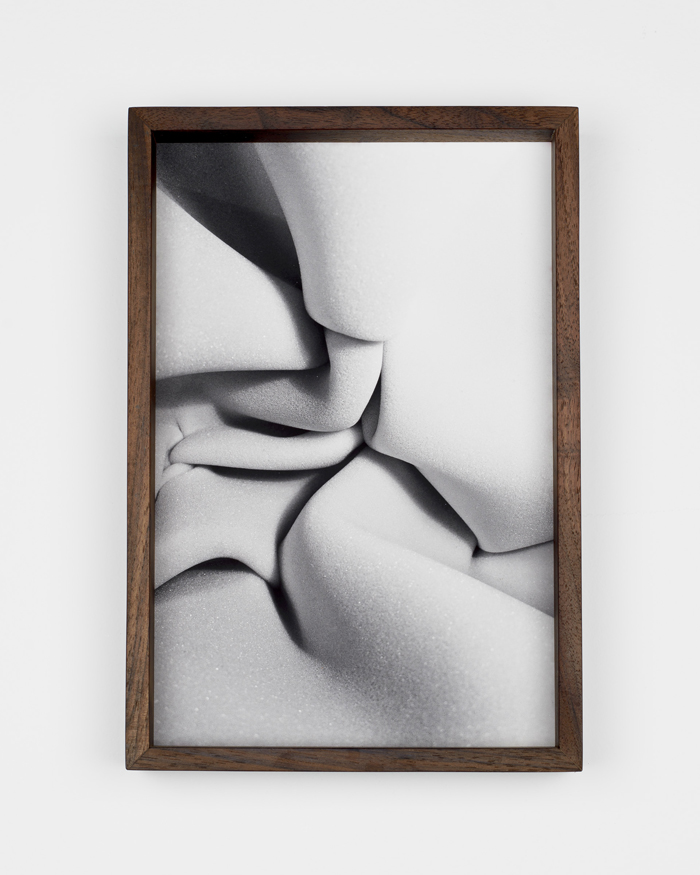 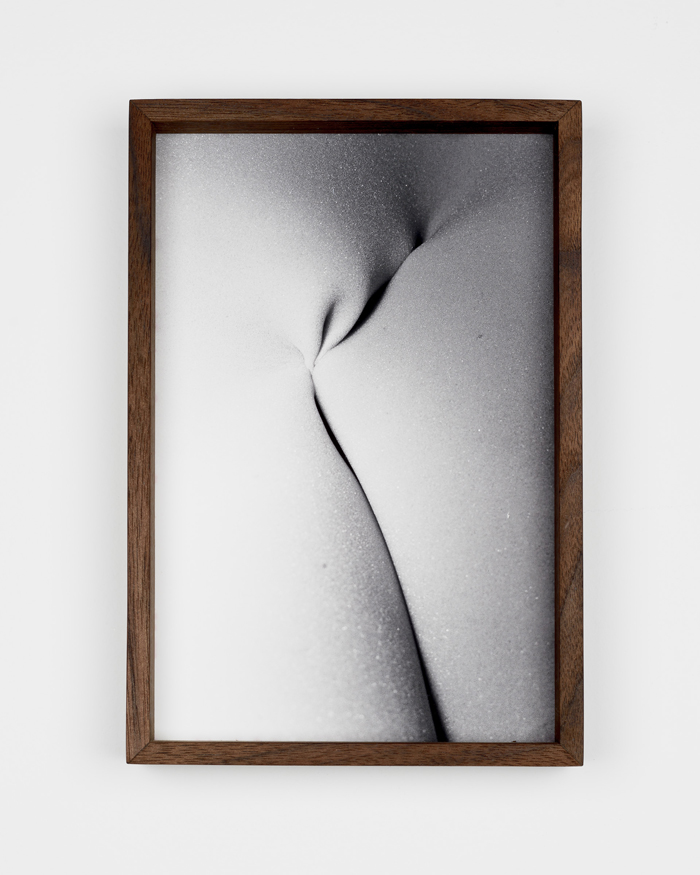 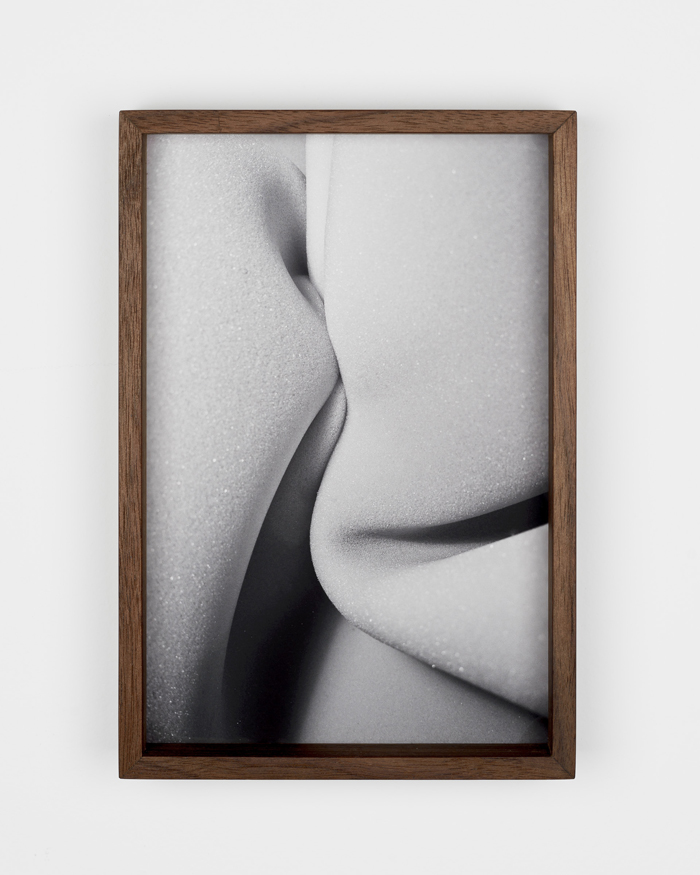 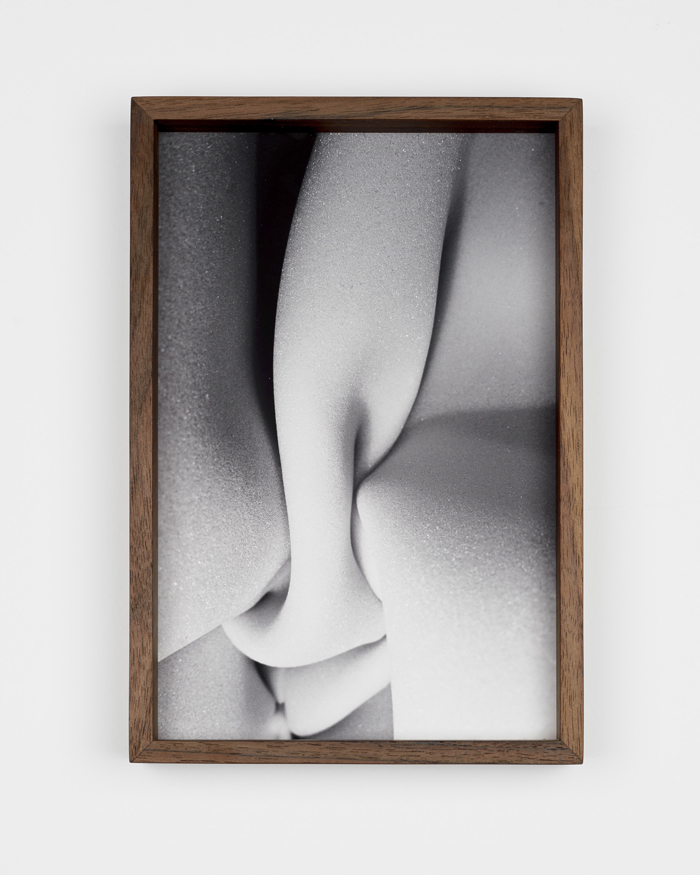 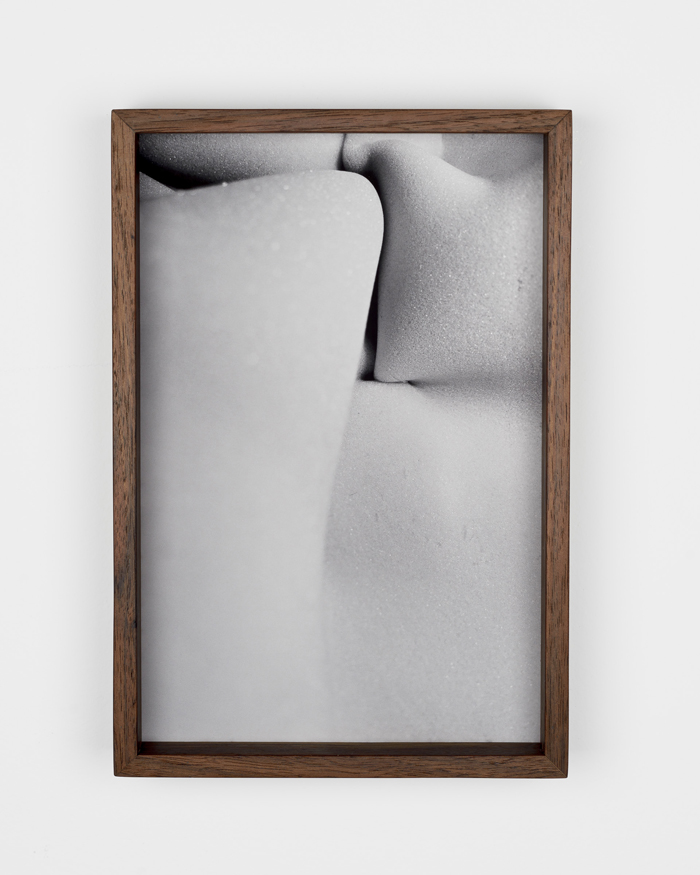 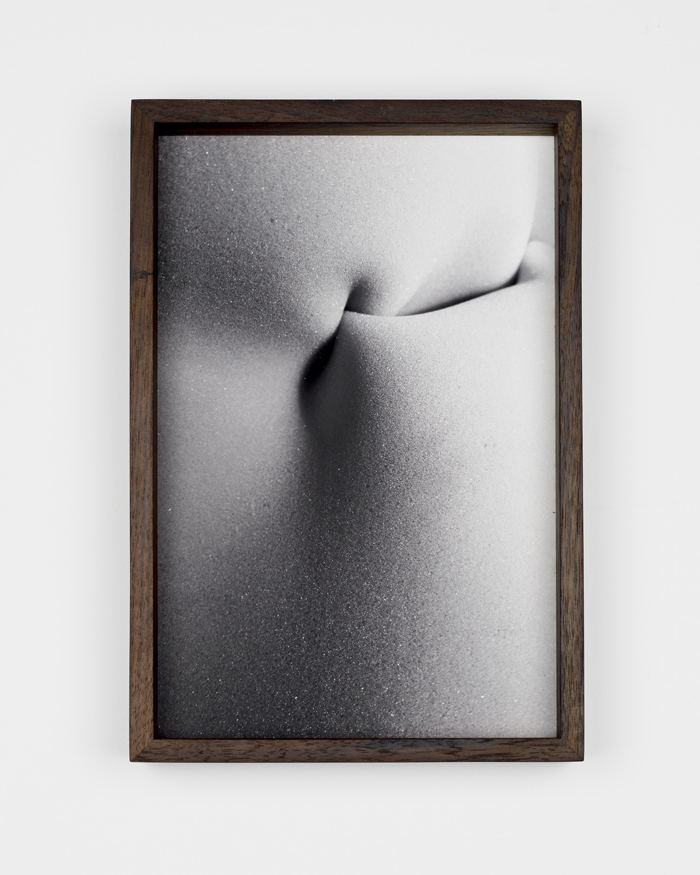 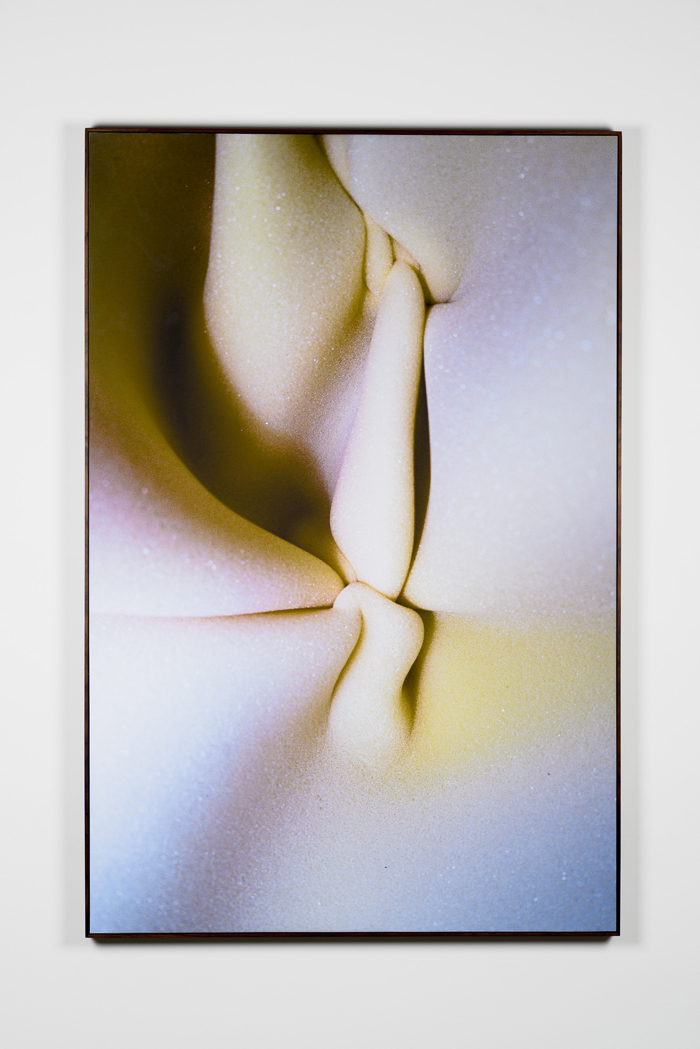 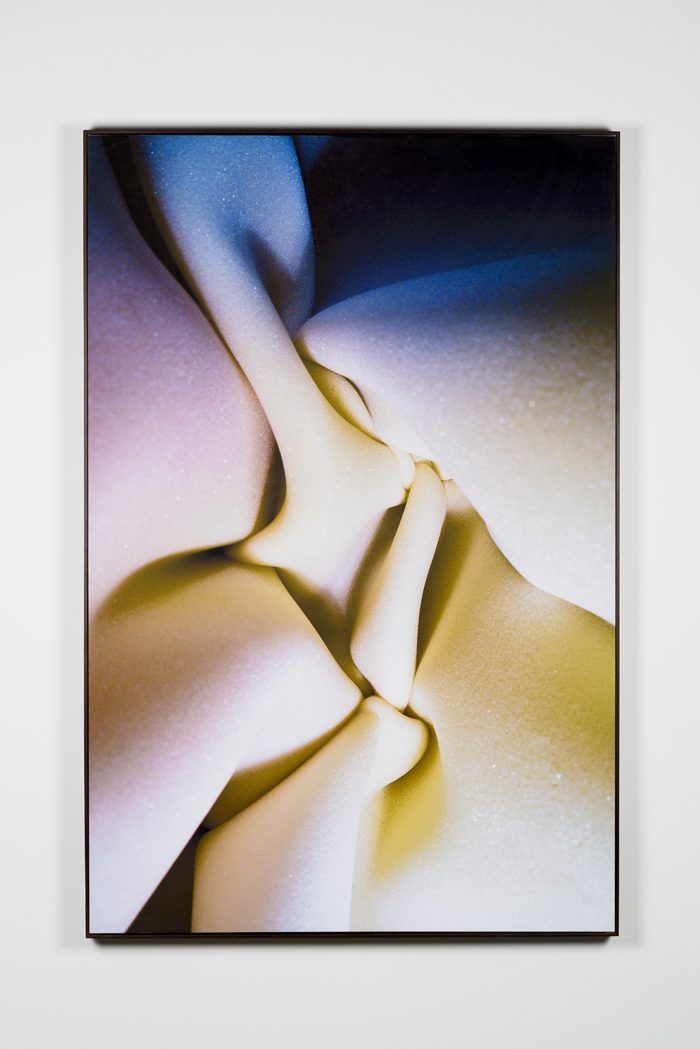 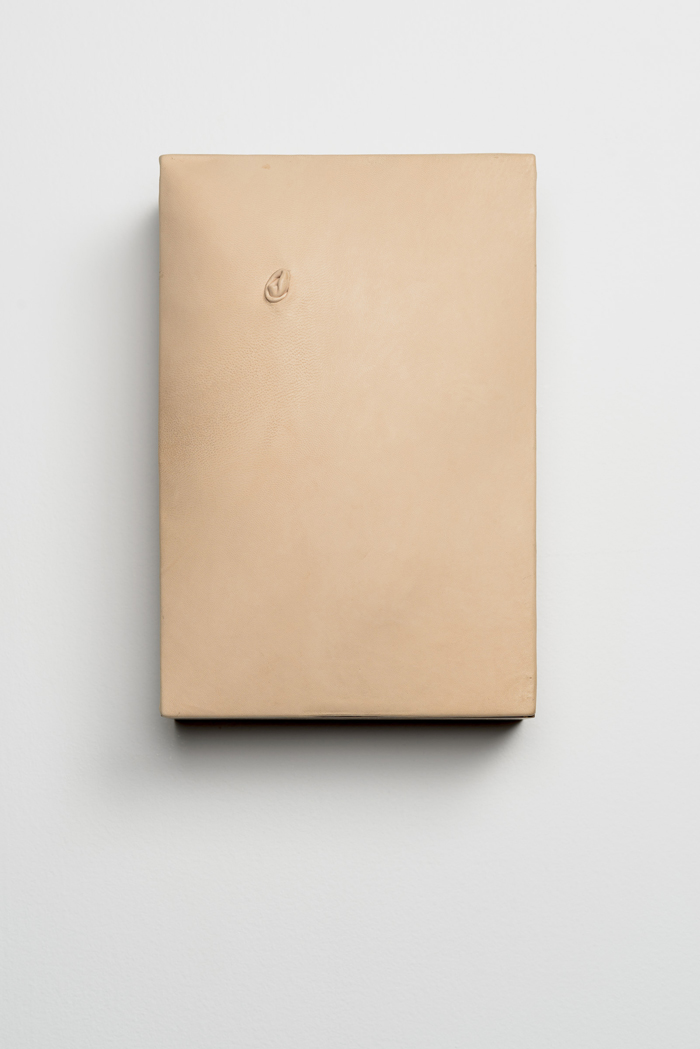 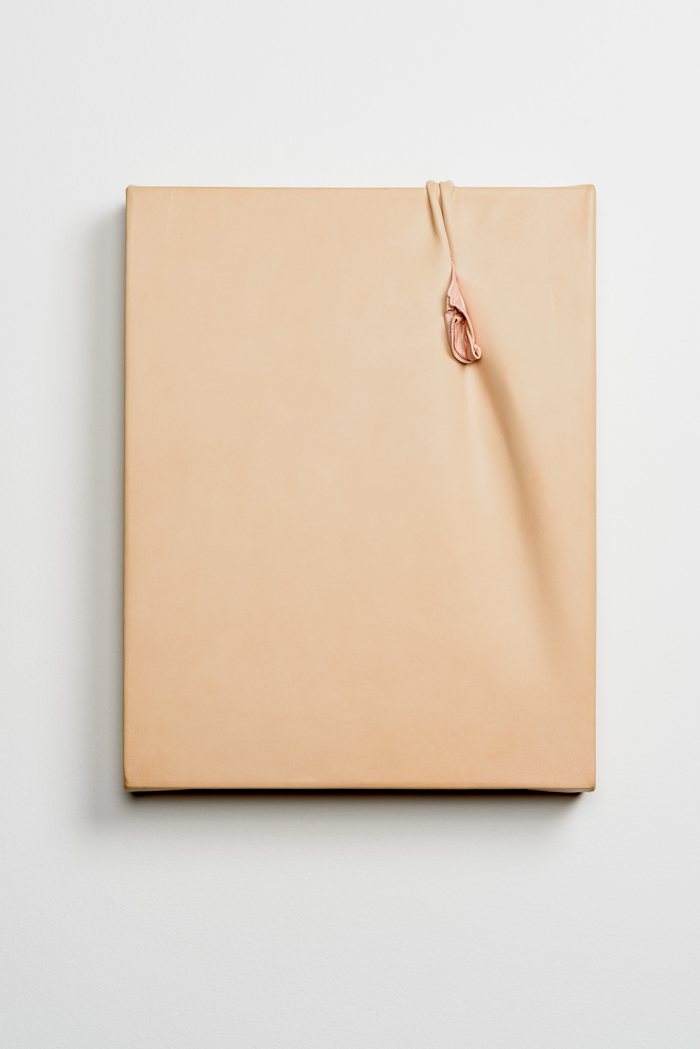 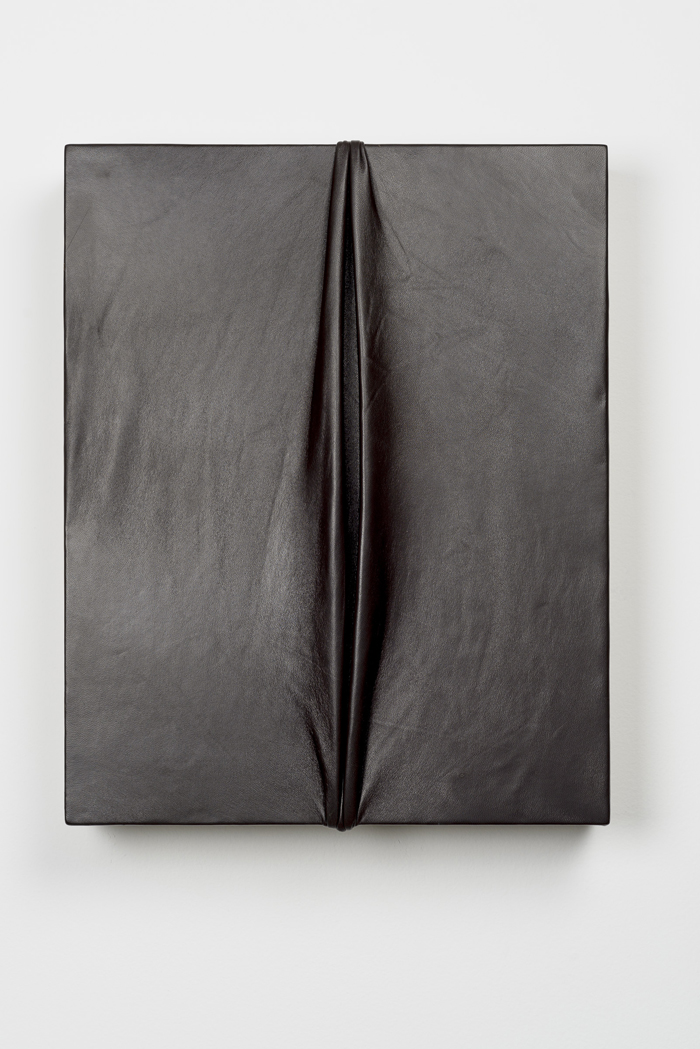 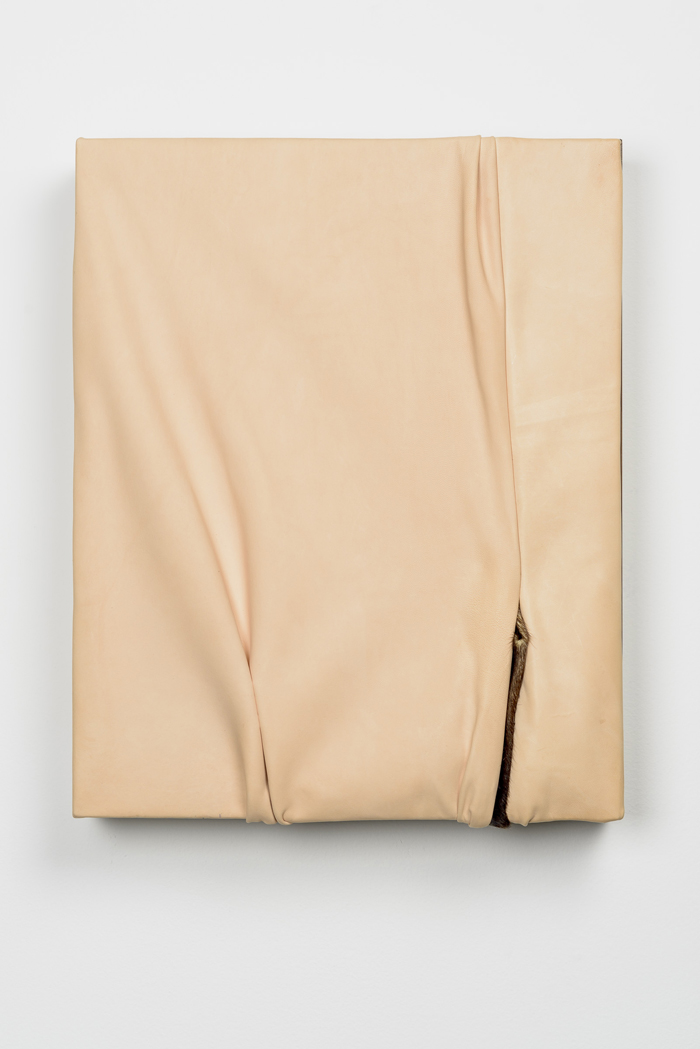 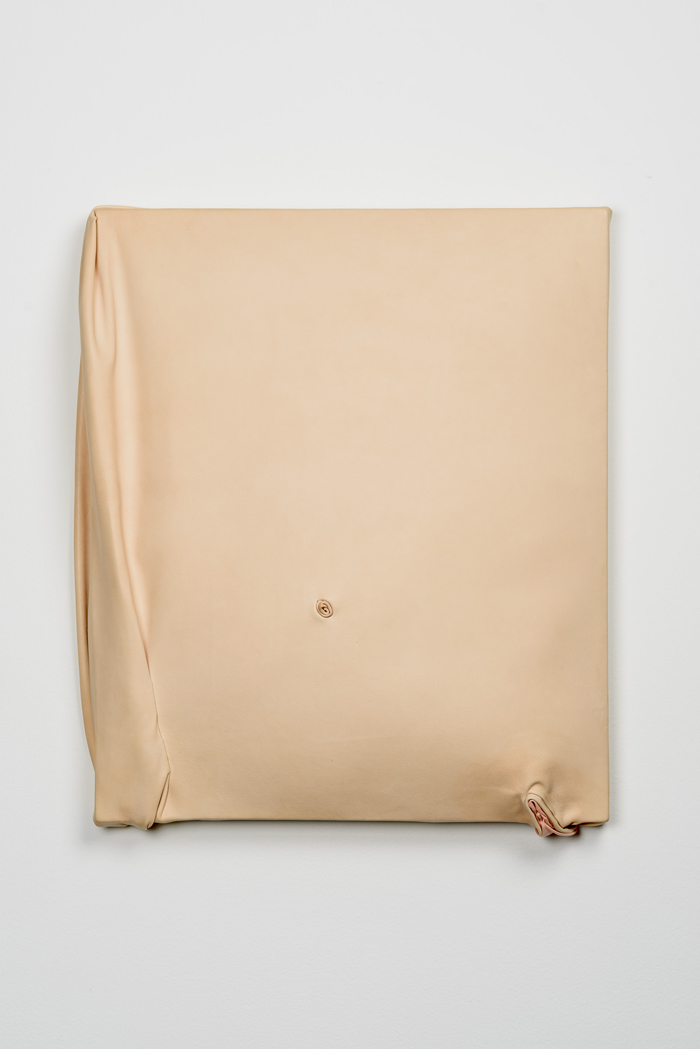 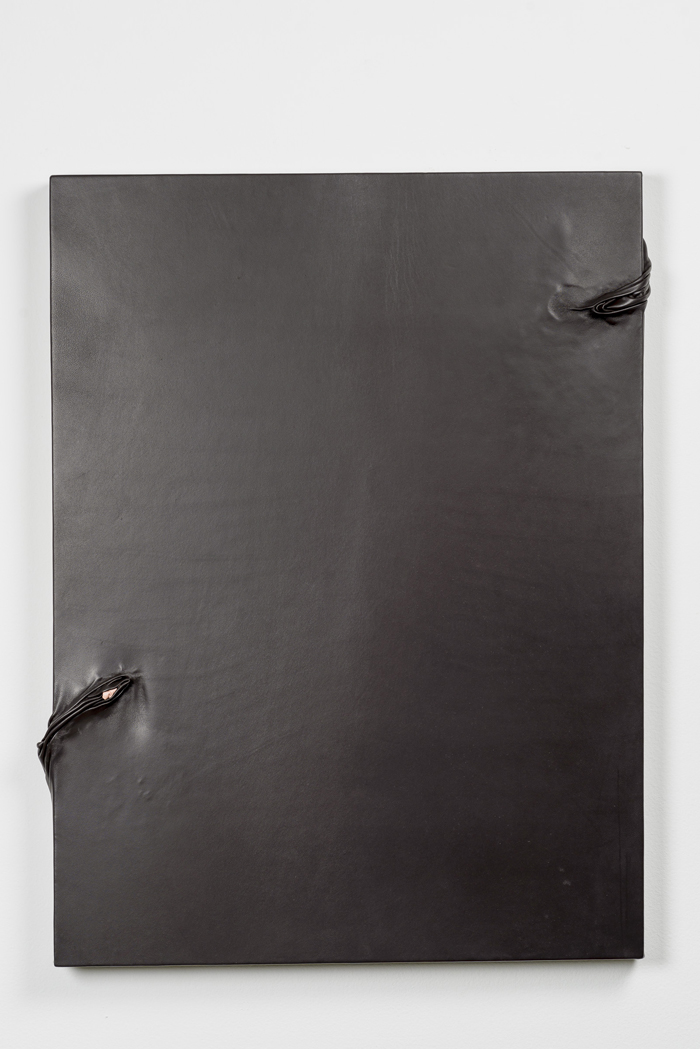 All images are courtesy of the artist and Proyectos Monclova
Photo credit: Moritz Bernoully

This exhibition, in words of Martin Soto Climent, «consists of works that are the result of a dialogue between Caramel Huysmans and myself. Caramel stepped into my life after feeling a strong fascination for one of my works. We started a courtship over distance and now I invited Caramel to be the creator of this project… my show is an affective gesture, that narrates the story of this ideal love».
This particular piece that captivated Huysmans is an object manipulated by Martin Soto: «a red leather purse, displayed in an obscene way, suggesting a vulva». Similar to other works by the artist, the appearance of an everyday object is reconfigured by a minimal gesture. In this particular case, the manipulation is achieved by turning and playing with the folds of the object’s interior lining. Such an intervention then results in a destabilization of the object’s conventional reading, and radicalizes its potential for new meaning: The force of the fold eroticizes the everyday. Nevertheless, such reconfiguration represents only an instant. The object can be manipulated and subsequently returned to its original state, recovering its function as a purse. The ephemeral potential of such interventions is a constant feature in Soto Climent’s practice and it is precisely this aspect that reveals the artist’s refusal to understand and conceive art as a static, completed product. The series of works on view, which conceptually originate from and comment on this distorted purse, oscillate between two-dimensionality and volume. Their surface is animal skin. Some of them have almost sculptural features and the incorporated folds evoke suggestive shapes alluding sexual reading just like the red purse. It is quite surprising that Caramel Huysmans shares her surname with the notable writer Joris-Karl Huysmans, who dedicated his outstanding novel (A rebours, 1884) to the inquiry of pleasures and tortures of the ideal aesthetic world.
The works in this exhibition have a strong tactile character, given their fleshy exterior and their three dimensional forms, but they also extend their presence onto our olfactory senses.  With their striking materiality and their folds —which seem to shape sexual organs, nipples, navels and skin marks— the objects reveal themselves as nude body fragments, confronting the spectator. The aesthetic elaboration of this series can provoke a profound attraction as well as a distancing aversion at the same time; a contradictory relationship investigated by Joris-Karl Huysmans in his novel. The pieces on view thus reveal a certain eroticism between two individuals that can be related to Hans Bellmer’s photograph Store in a Cool Place (1958), in which the artist tied up the body of his partner Unica Zürn, turning it into a formless mass divided by multiple folds.

Martin Soto Climent (*1977) lives and works in Mexico City where he co- founded the project space Lulu with independent curator Chris Sharp in 2013. This is the artist’s first solo exhibition at Proyectos Monclova and marks the beginning of an ongoing representation by the gallery. The artist is also currently preparing a solo show at El Museo Universitario del Chopo in Mexico City (opening in October 2015) as well as a project for Palais de Tokyo in Paris (opening in autumn 2016).
Recent international solo projects include Luster Butterfly at T923 (Naples), The Contemporary Comedy: Glossy Mist at Clifton Benevento (NY), The Equation of Desire at Kunsthalle Winterthur (Winterthur) and The Bright of the Whisper at Kunstraum Innsbruck (Innsbruck). Soto Climent has also participated in numerous group exhibitions in museums such as Migros Museum (Zurich), PS1 (New York) and Museum Morsbroich. (Germany).