Daily Lazy Reads: What Do One Million Ja Tags Signify? By Dumar Novy 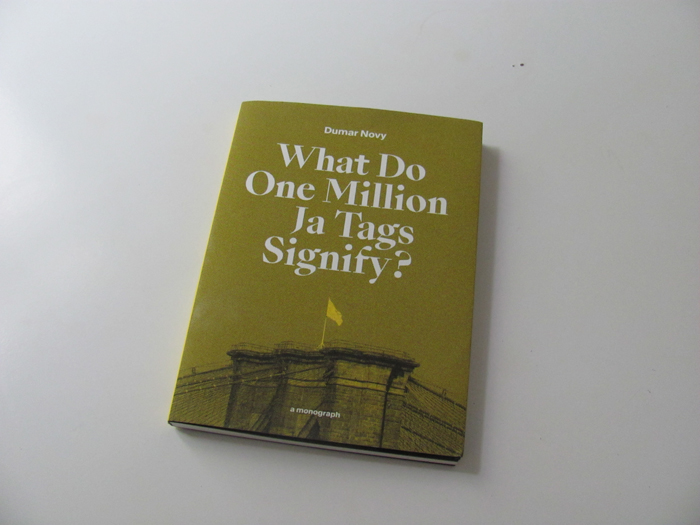 Some motherfucker has been tagging the side of your building for thirty years. Could that possibly be explained by common sense & unqualified observers, or is there something deeper happening on walls and objects throughout New York City?

A few of the essays written in this monograph, published separately in German and French, offer a succinct introduction to Dumar Novy’s recent thoughts on graffiti.
Novy tries to dispel the cynicism frightened beings traditionally have toward graffiti by showing that at the core of life, there is a yearning for the same experience: the impression of existence. Guided by the question Can the WoWO speak? Novy creates poetry that weaves philosophical interrogations with mathematical calculations, exploring such diverse fields as kinship, rebirth, dog shit & etymology.
Dr. Dumar Novy, a leading philosopher, radical political theorist & advocate for the wholesale use of Lysergic acid diethylamide, is head of the Department of Thought & Graffito at the University of Straße. Possible Books University Press has published six of his previous essays: Veefer in time & space (1999), CH Semz (2002), Gstacks & Cents (2004), Ead Sabe Mate (2007), DG NWC King of Swing (2009), MS Tez & Fate  (2010).
http://www.possible-books.com/en/
Tags Daily Lazy Reads:
Newer Post Older Post Home