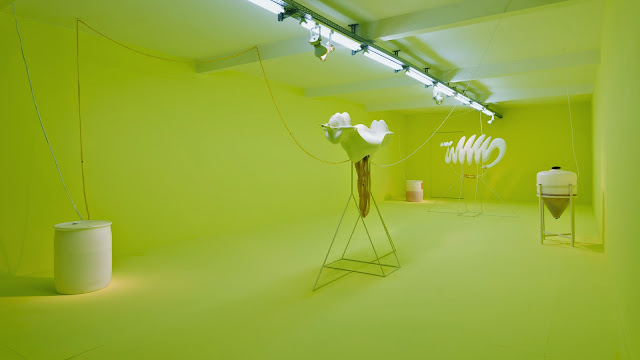 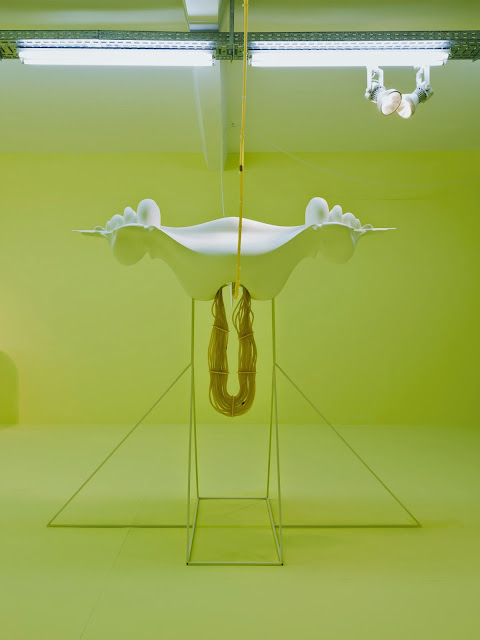 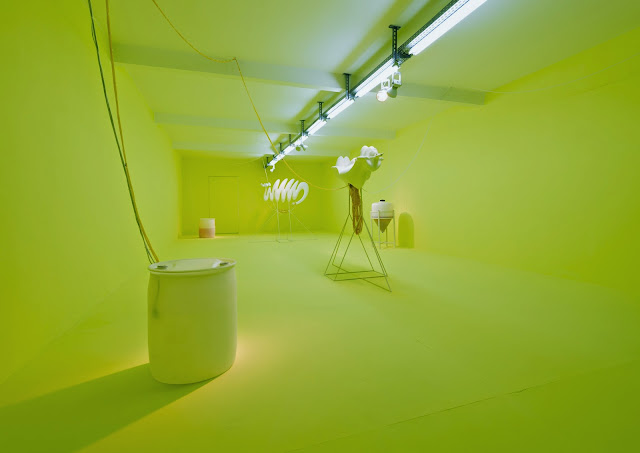 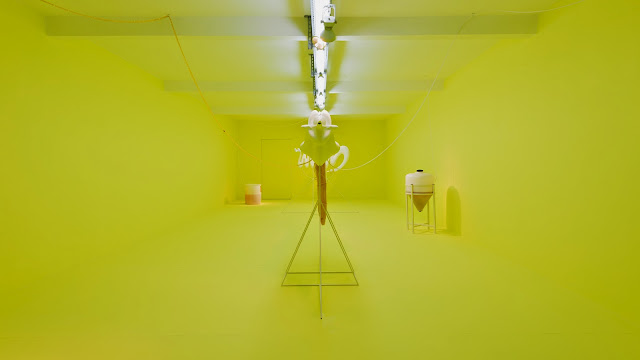 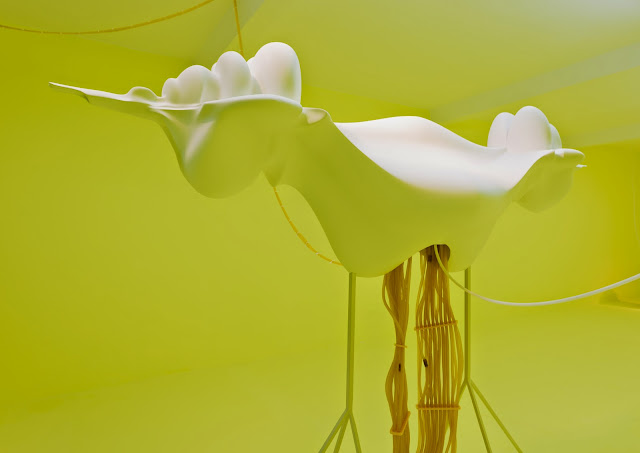 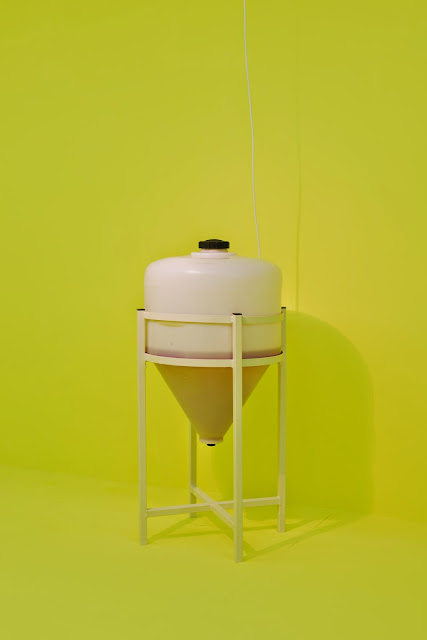 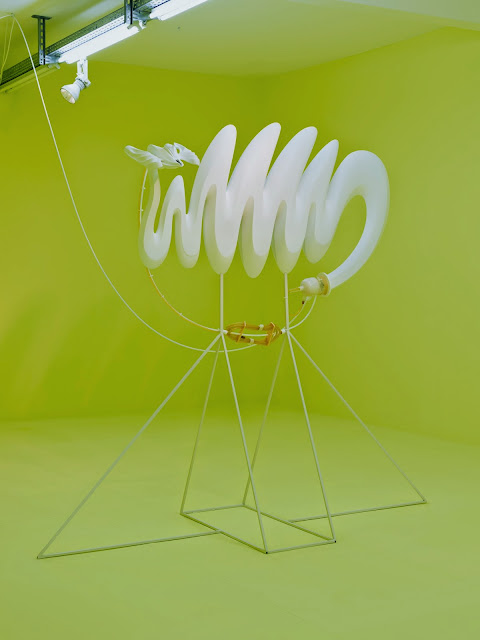 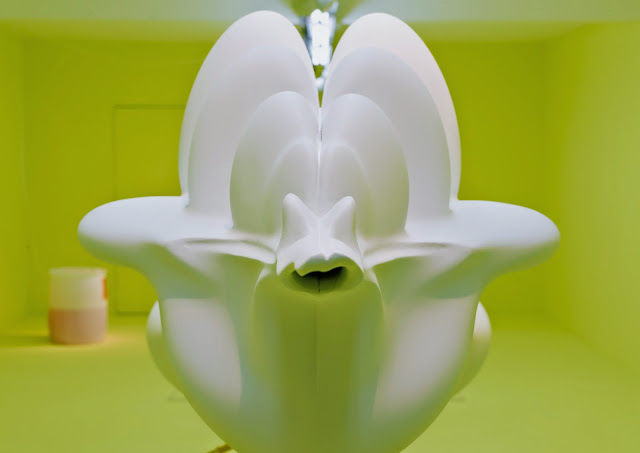 Marguerite Humeau
Echoes
When Marguerite Humeau’s exhibition *Echoes* closes on June 6, the hypnotic yellow pigment that dresses the walls of the gallery for her work Black Mamba will presumably be repainted in a casual White Cube white. The layer of icky paint that you encounter now will however remain in situ under its new coat and you might remember during the next opening that the walls still contain the two grams of deadly poisonous venom, sourced in Florida, and used by Humeau as a colour sample and ingredient for her mural.

The yellow walls backdrop Humeau’s signature white polystyrene sculptures propped up on elegant metal legs or artificial prostheses and varnished to a kind of unearthly gleam. These graceful beings will spend the next six weeks calmly generating potions and toxins – agonists and antagonists – as in the case of Wadjet (King Cobra), which is engineered to produce its own antidote. Sobek (Muhammad Ali) produces resilient alligator blood on an industrial scale.

Humeau emphasises her interest in life and death as a matter of transition – as a fundamental change in a stage of aggregate that preserves an essence of a prior condition much like the wall retains its many coats of paint. In a quest that resembles biosynthetic sorcery or a 19th century expedition in the age of Google, she unearthed the sources of black mamba venom from Floridian laboratories, Australian alligator blood, and Californian breast milk. Humeau researched natural bodily fluids that have the capability to heal and to enhance life. The alchemical combination of alligator blood, hippopotamus milk from a Taiwanese zoo, online-shopped breast milk, and the chemicals Rapamycin and Resvetarol, gurgling and gasping within the pumping system of Tawaret, produces a light-pink potion that contains strong antibiotics and antiseptics, “capable of healing any disease” – according to Humeau (there is a sort of calm ecstatic truth about the potentialities she formulates.)

The titles of her works, Wadjet, Sobek, Taweret, reference the hybrid gods and goddesses of Ancient Egypt. Humeau thereby splices the oldest known human concept of the afterlife with the most recent dreams of regenerative medicine and biological engineering. Her retro-engineered afterlife comes along as a vision of a designed future in which we, too, become hybrids: part hippopotamus, part alligator, part goddess of childbirth and fertility.

Often in her work, Humeau has devised ways to conflate time by resurrecting extinct creatures and their voices. In this exhibition, the synthetic voice of Cleopatra sings to a 21st century beat in the nine extinct languages that she spoke. She becomes a modern day diva (imagine an FKA twigs-style music video), which means, of course, a goddess. The connotation of the “diva” as a celebrated female singer with an attitude originated in the late 19th century with the technical possibilities to record a voice, to eternalise, disembody and transmit it across the globe. Humeau’s labyrinthine adventures often gift her breathless subjects this kind of mediated, i.e. divine afterlife.

This gift of life however, to come full circle, contains a Warburgian twist. That “which is given,” the “dosis” (the giving of medicine), over linguistic time transformed first into a euphemism and then into the German word “Gift,” meaning poison. Humeau serves us her accursed share of toxins along with a vision of resilience, immunity and immortality, whose scientific basis within her speculative endeavour is trustworthy enough to become perilously attractive: Drink the milk, transfuse the blood, but keep clear of the walls.