Stephen Felton / The Wind, Love and other Disappointments

Stephen Felton,
The Wind, Love and other Disappointments 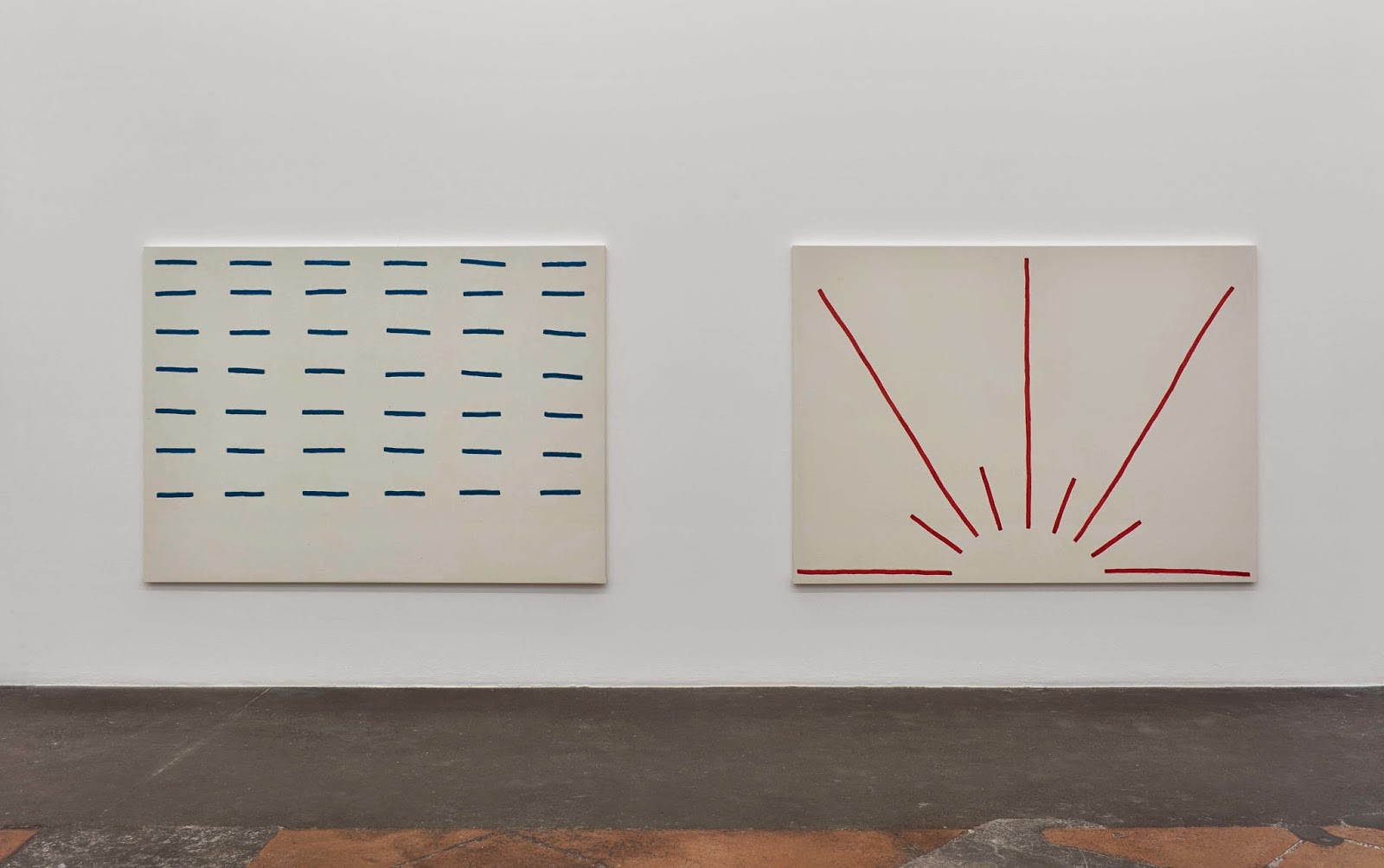 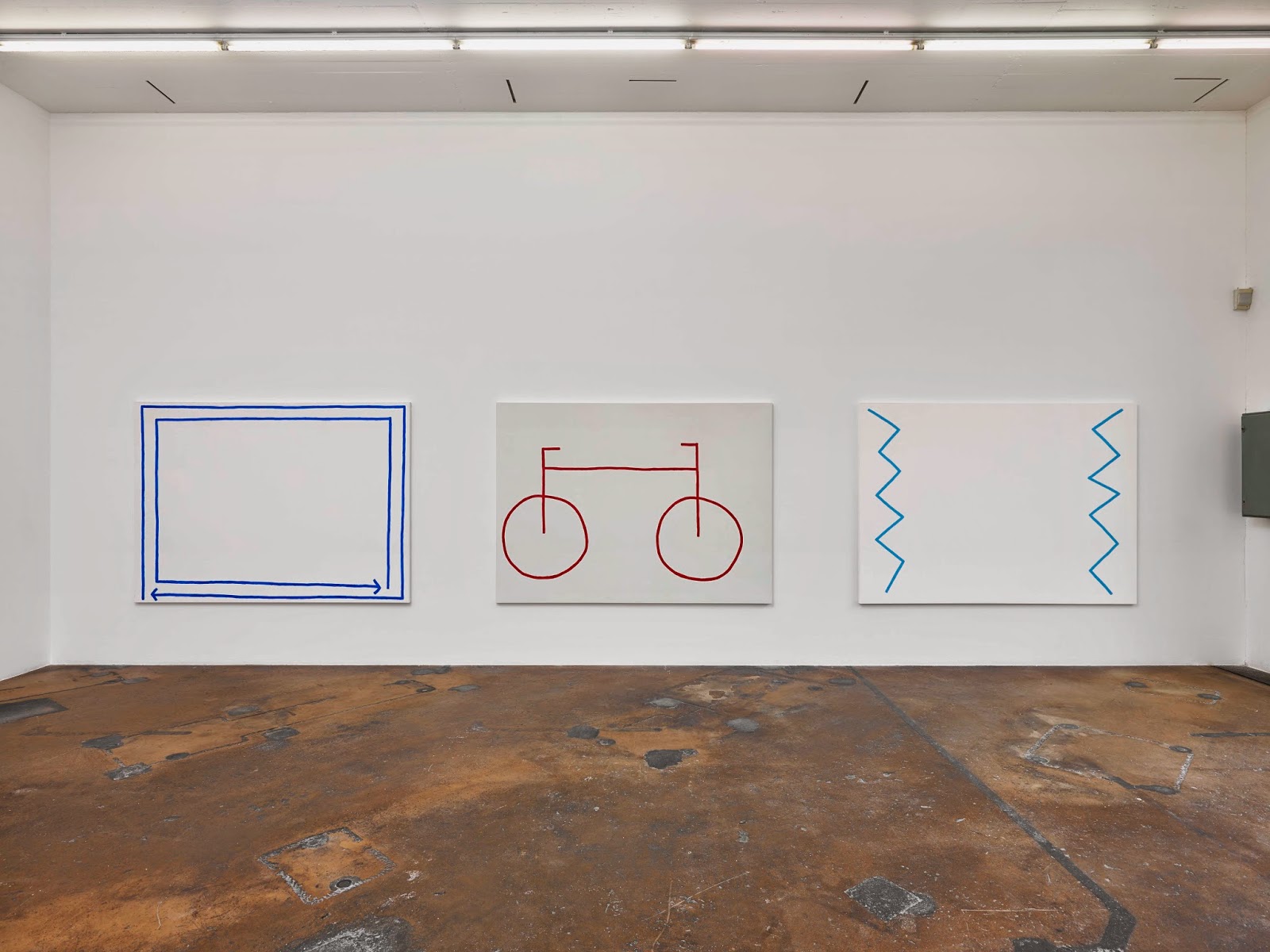 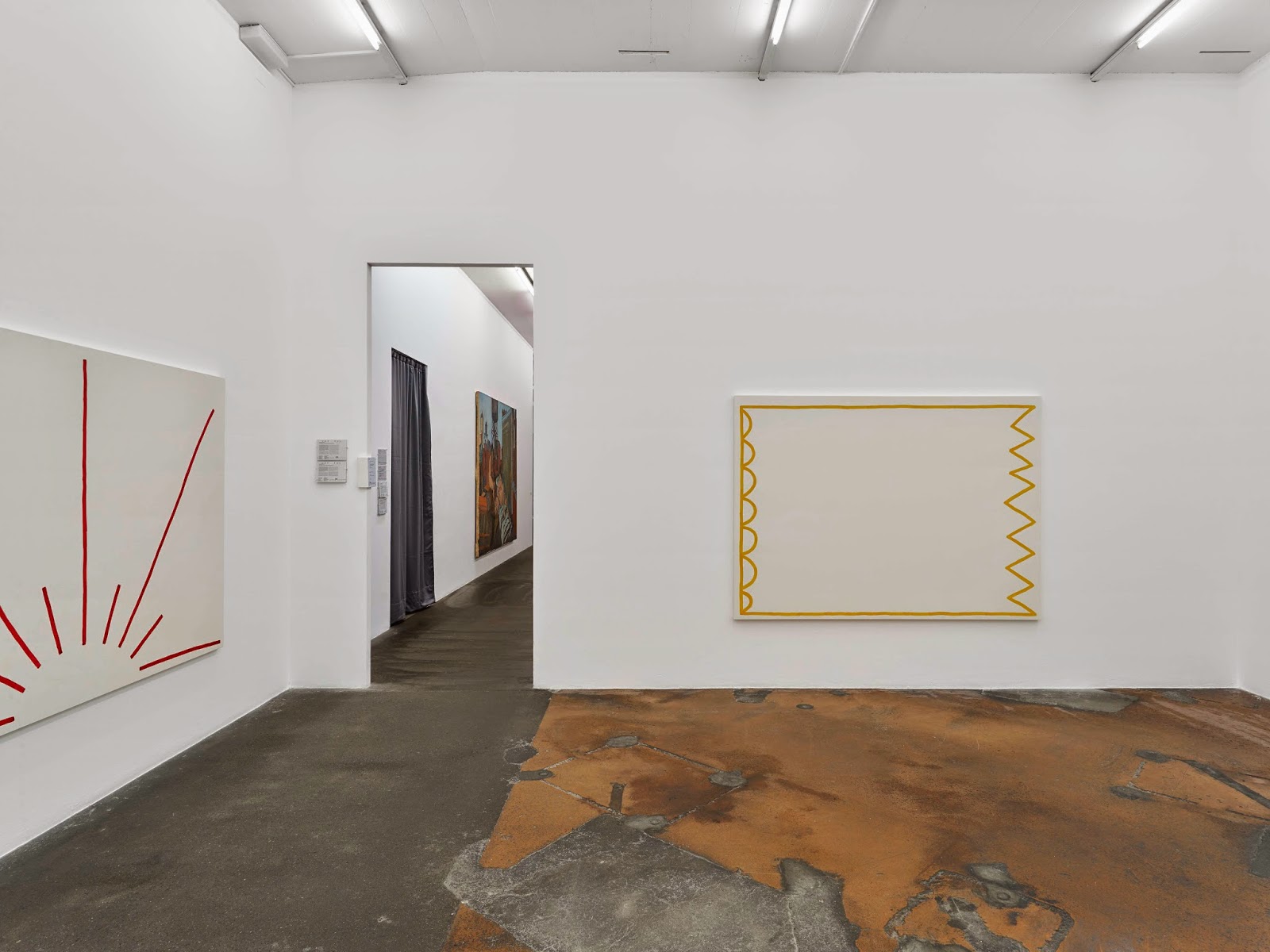 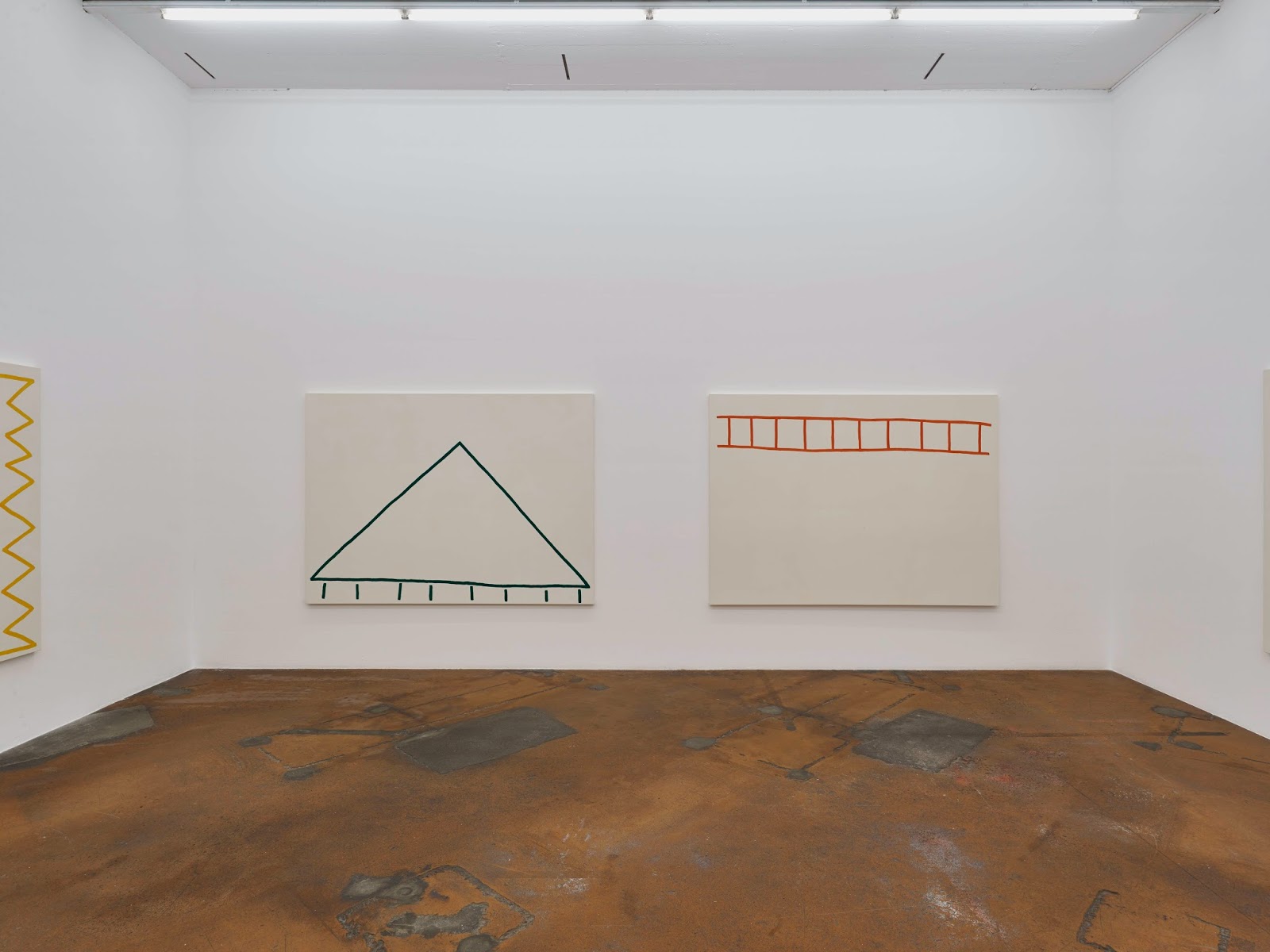 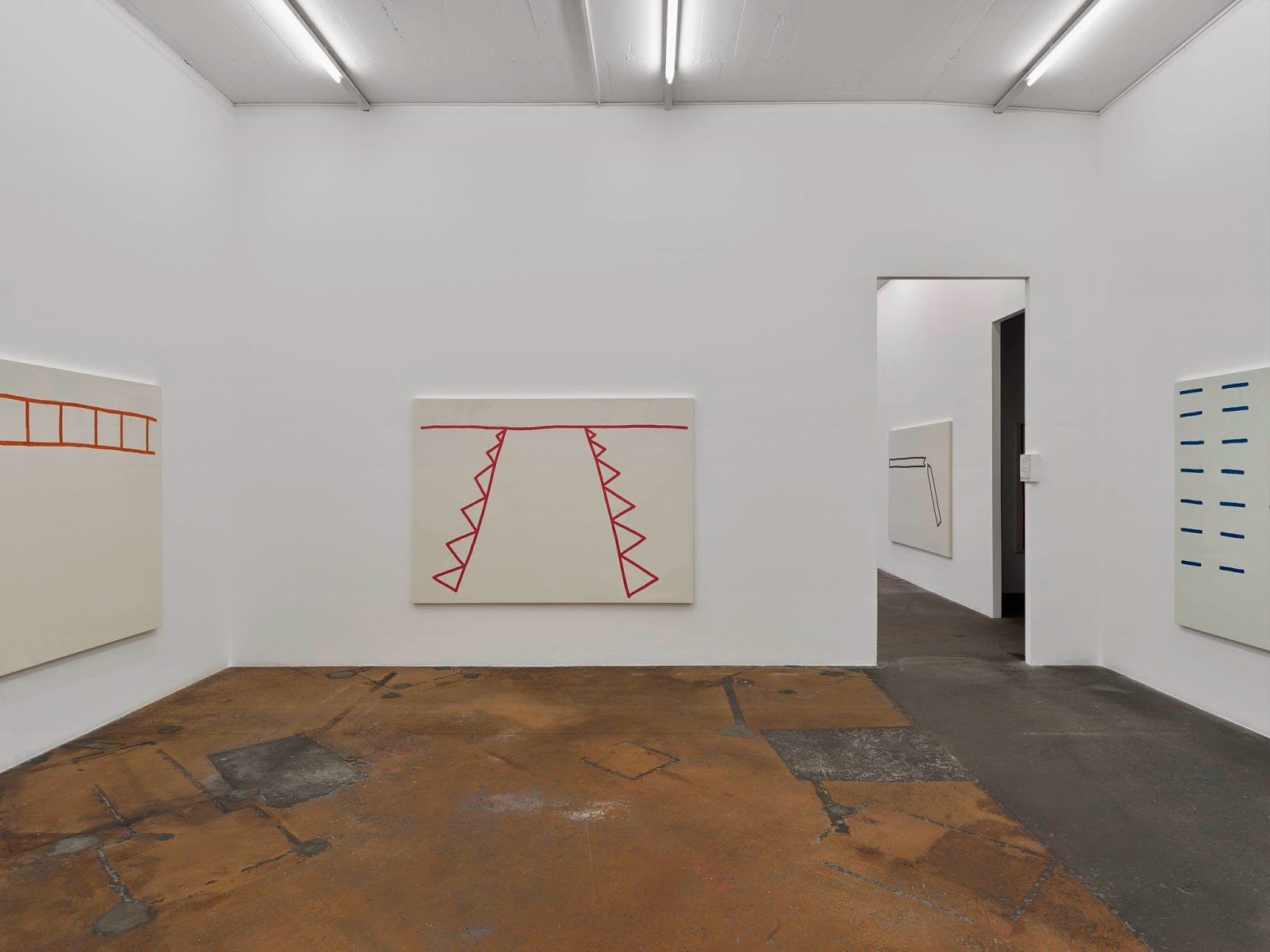 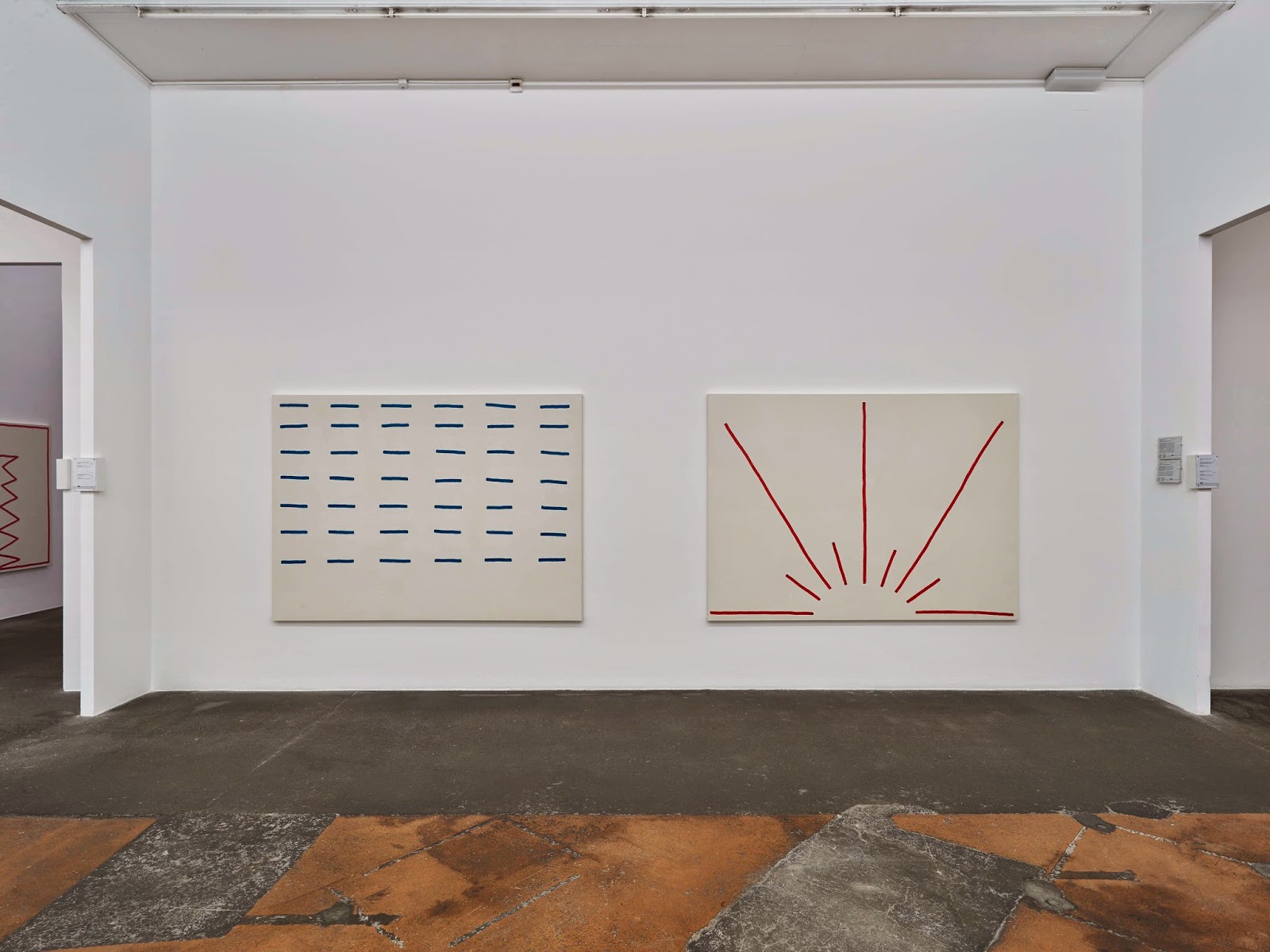 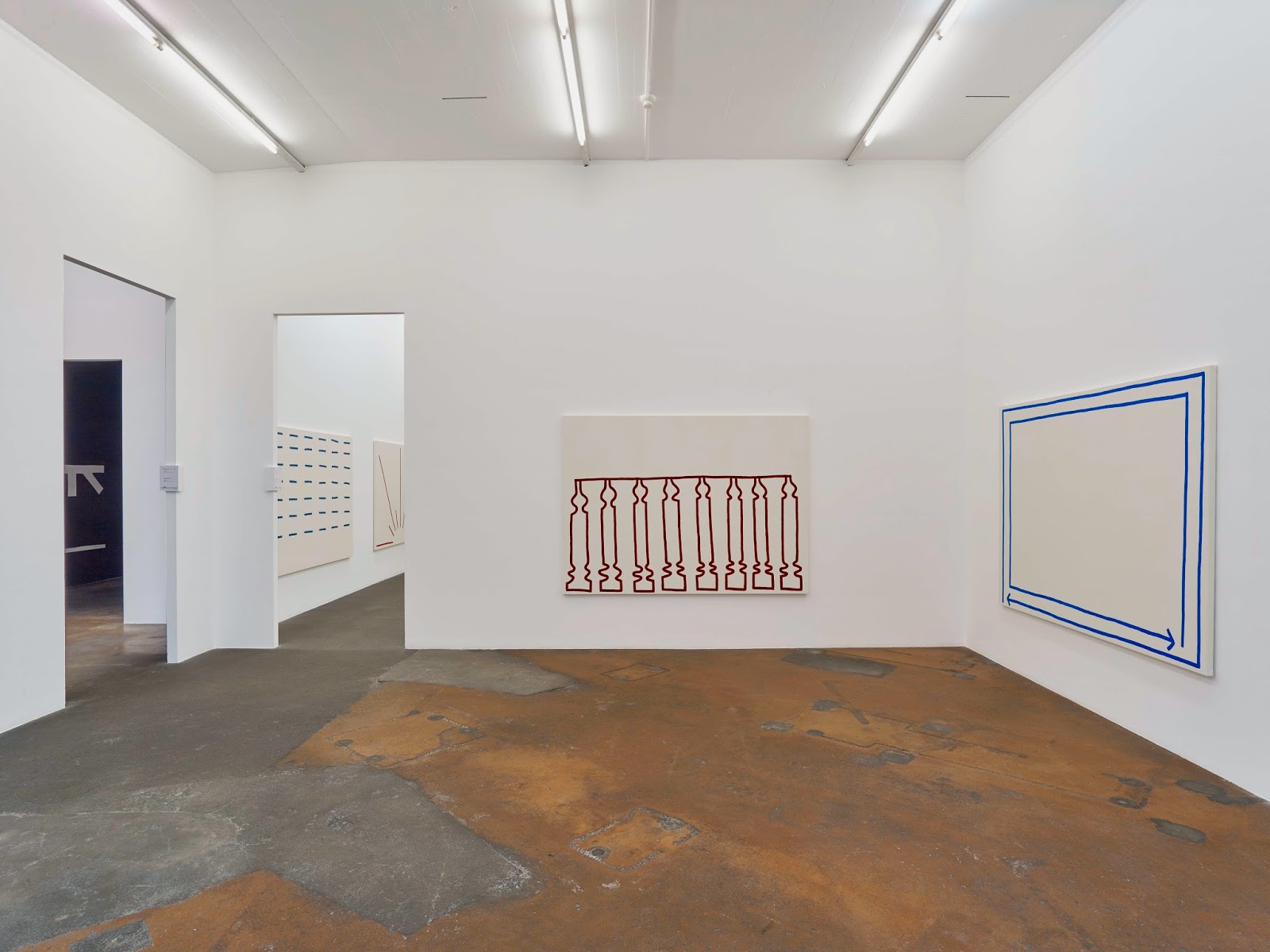 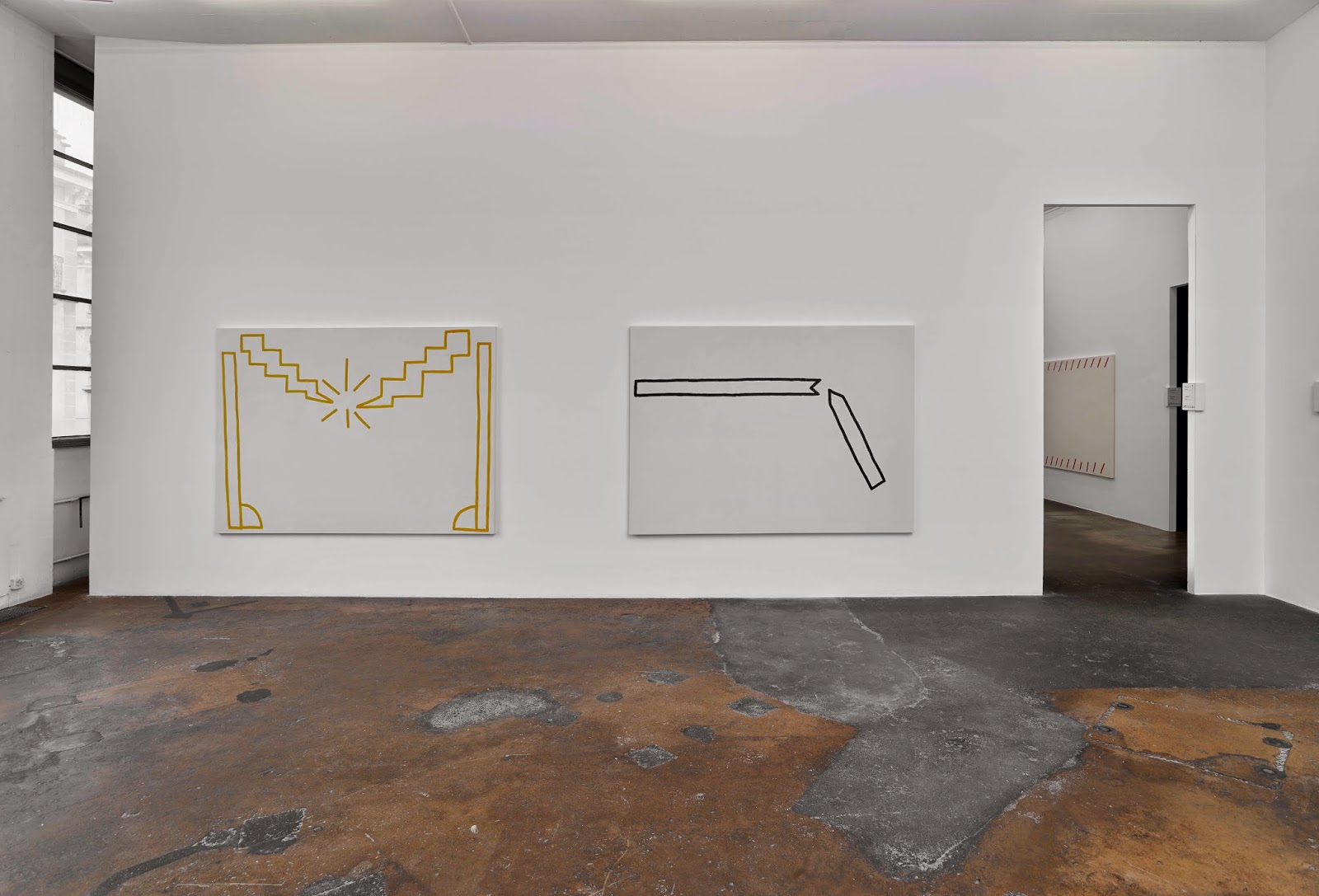 Photos courtesy of the artist and MAMCO

Seriously flippant, radically relaxed, awkwardly spontaneous, readily complex: such paradoxical descriptions of Stephen Felton’s paintings are disconcerting. Freehand drawings in a single colour on a large canvas, and a simplicity of sign and execution that suggests children’s drawings, cave paintings and blurred pictograms in which symbol and icon, figuration and abstraction are indistinguishable — the birth and death of the signifier all at once.

The main motifs in this economical iconography are arrows, staircases, ladders and stars — for they resist the habitual classifications of representation. Beyond their semantic effectiveness, they above all reflect the speed of a gesture. Detached from virtuoso authority, and accessible  to all, Felton’s painting expresses a certain composure, a calm disrespect for whatever might be thought of the painter’s profession and his various schools. The artist Dan Walsh, whose assistant Felton once was, likes to describe his initial works as Peter Halleys painted by Philip Guston: a rigorous composition ‘loosened up’ by a style suggestive of cartoons. Again, Felton’s painting could be described as Martin Barré painted by Keith Haring: a pursuit of sobriety and fragments expressed by means of figuration libre.

Yet we should not see this as some postmodern game in which references are ironically erased. Felton’s (and indeed Walsh’s) work displays a belief in the process of painting rather than its completion. As the critic Jill Gasparina has written, ‘Assembling colours in a certain order on the flat surface of a prepared canvas ... is not a way to obtain an artefact fit to decorate an interior or occupy vacant space in an art centre, but a total activity that organises the whole of life.’ Here painting is understood first of all as a banal activity, on the same level as those that mark the artist’s everyday life, subject to the whims of his moods, of time, the people he meets and the things he reads.

Felton’s exhibition at Mamco, entitled The Wind, Love and other Disappointments, thus presents a hitherto unpublished series inspired by Arno Schmidt’s novel Scenes fromthelife of a faun. In this masterpiece of post-war German literature we follow, in three chapters (February 1939, September 1939 and September 1944), the life of Heinrich Düring, a public official in the small town of Fallingbostel who is sickened to see Nazi stupidity infiltrating people’s minds – including those of his own wife and son.

He seeks refuge in the detailed study of village archives, where he learns of the existence of a deserter from Napoleon’s army who had once terrorised the area, and actually finds his hiding-place, a shack in the midst of the forest. The narrator turns this makeshift shelter, unrecorded by surveyors, into a place of retreat and remoteness from the world that finally allows him and his lover to escape the Allied bombardments.

Günter Grass said of Schmidt ‘I do not know any writer who has listened so closely to the rain, so often talked back to the wind and given the clouds such literary surnames.’ The novel combines an erudite, terse cynicism with grand, elated outpourings about the moors, the moon and the wind. In formal terms it consists of a succession of short paragraphs full of neologisms, plays of punctuation, onomatopoeic nouns and coded references, in a ‘narrative cascade’ of memories and fleeting glimpses arranged ‘as if a spasm-shaken man were watching a thunderstorm in the night’.

We can imagine how this way of writing in accordance with ‘the lines of movement and the tempo of the characters in space’, in which all is fragments and speed, had a special resonance with Stephen Felton. Taking this mysterious book, which he only knows in English translation, he in turn presents a series of forms that do not necessarily illustrate a particular passage, but instead reflect a memory of his readings, his daydreams and the dreamlike fertility of a literary experience.