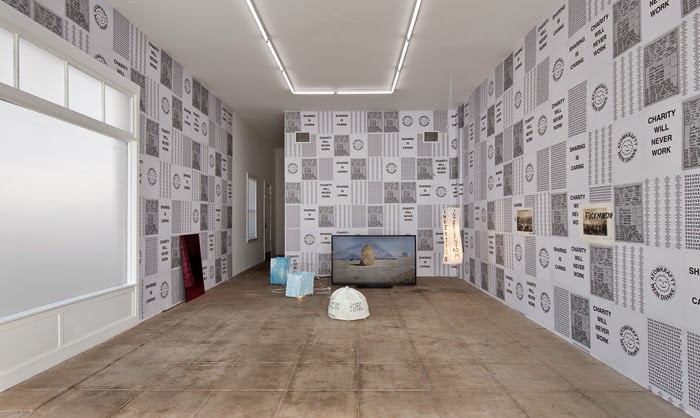 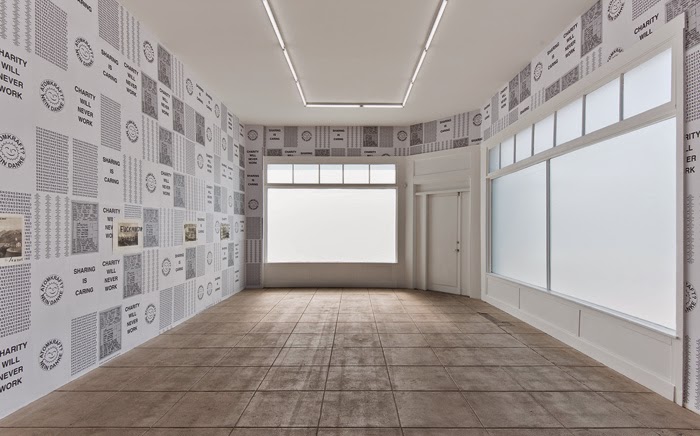 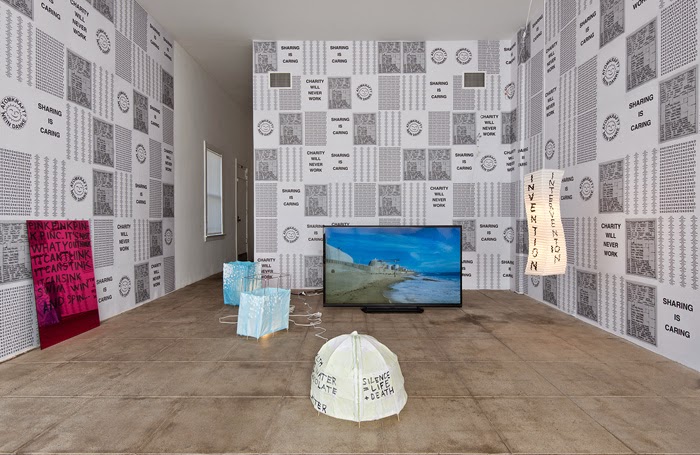 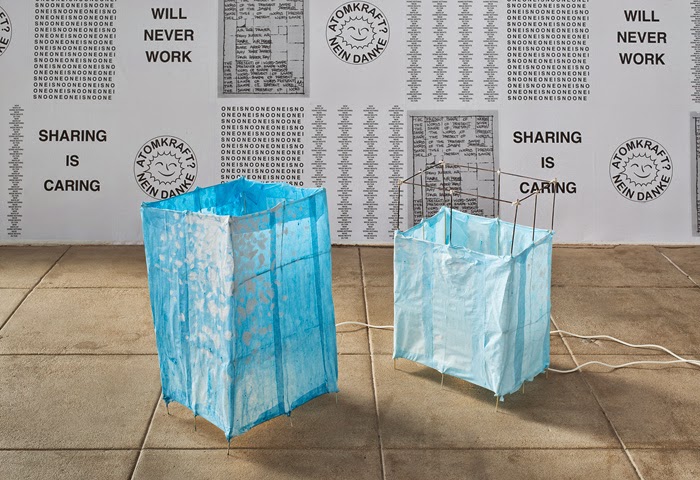 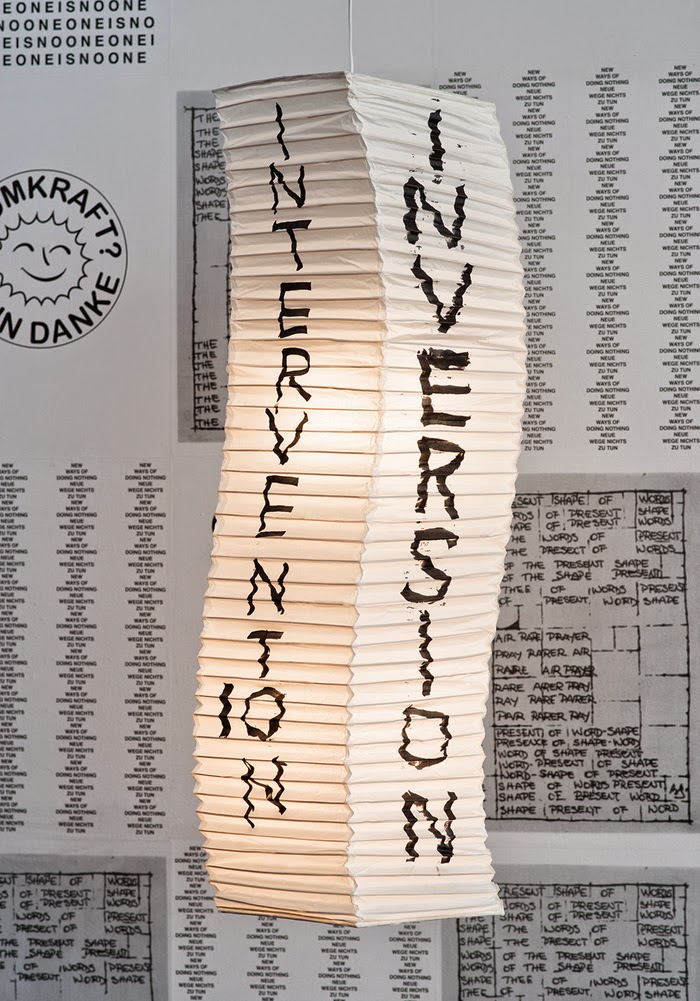 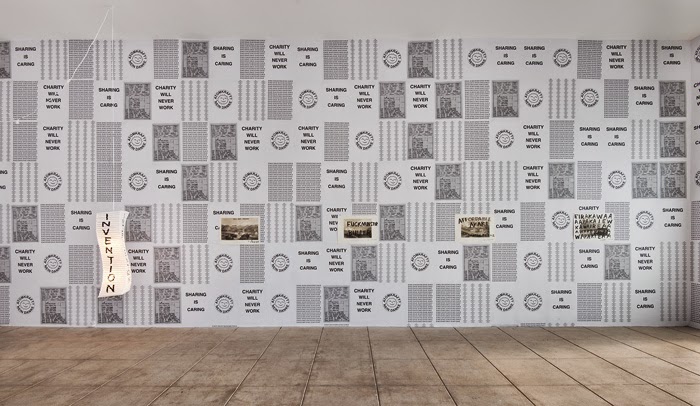 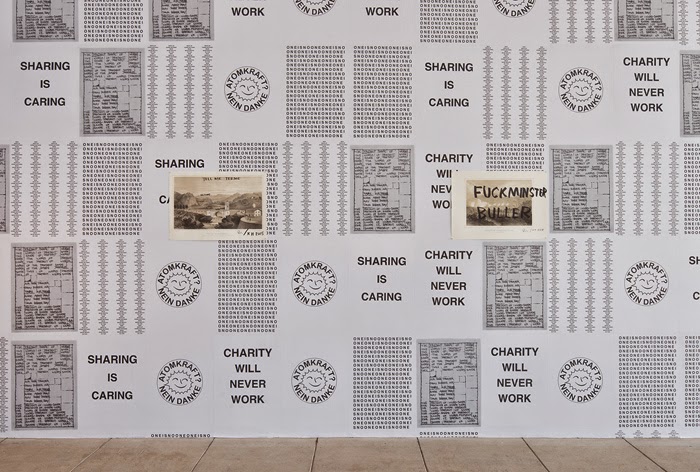 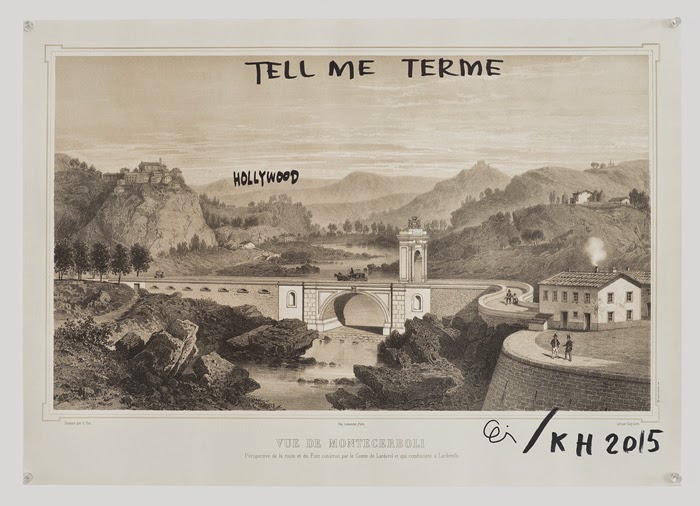 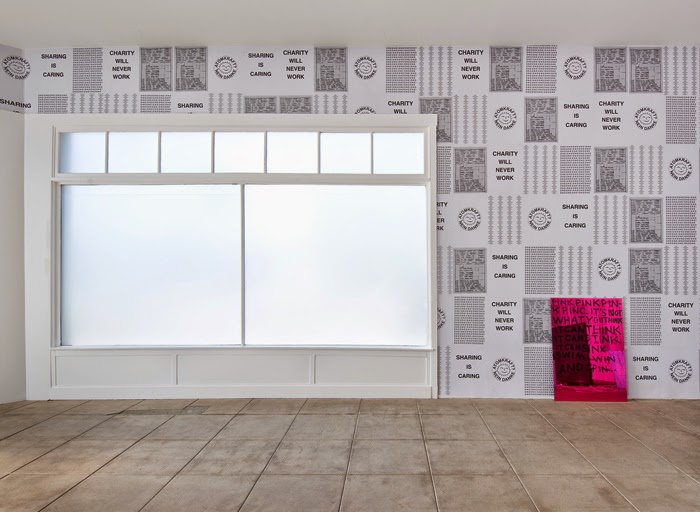 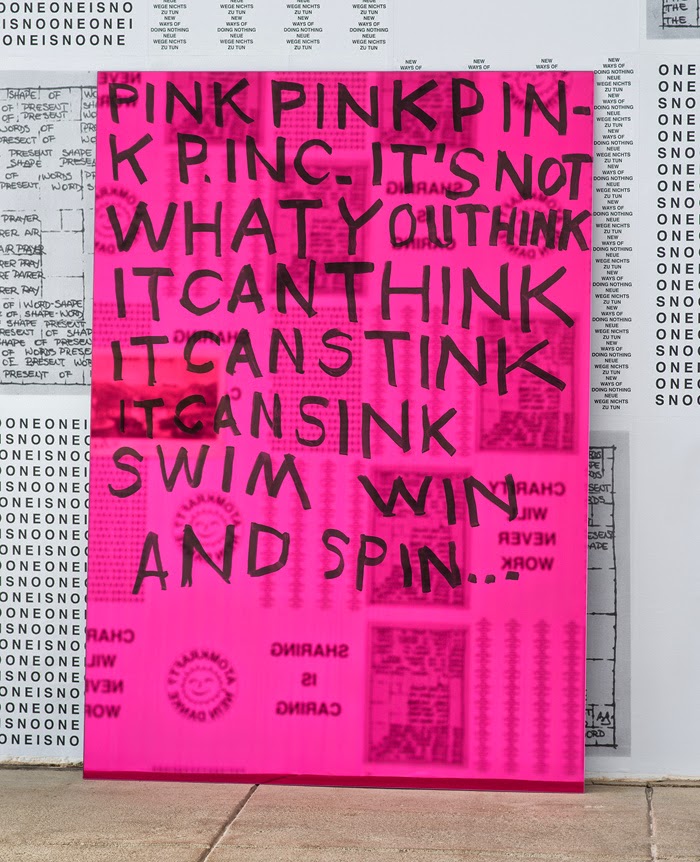 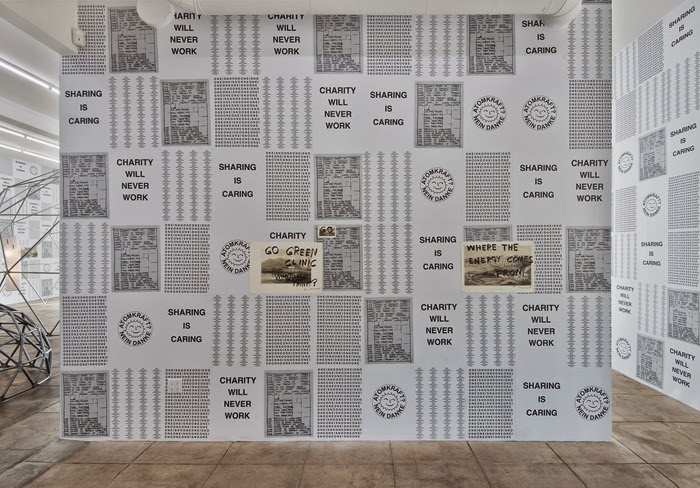 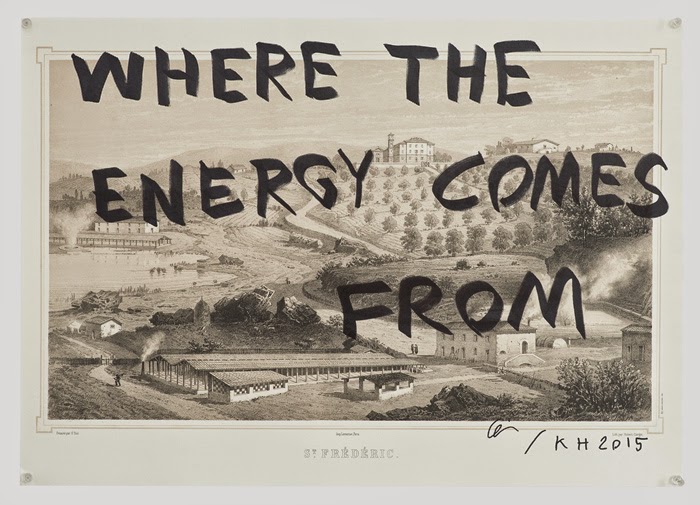 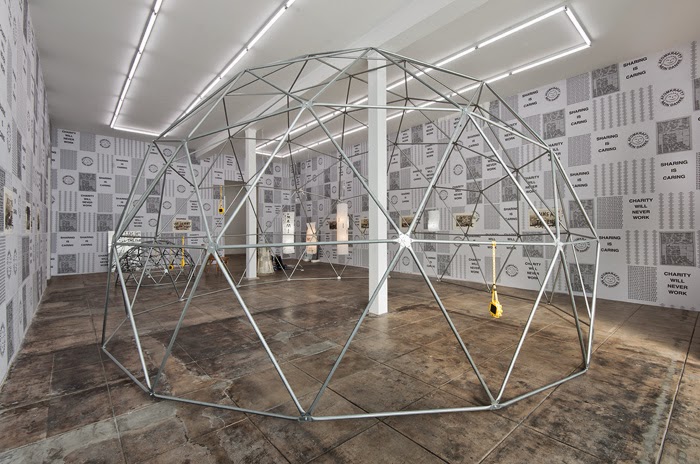 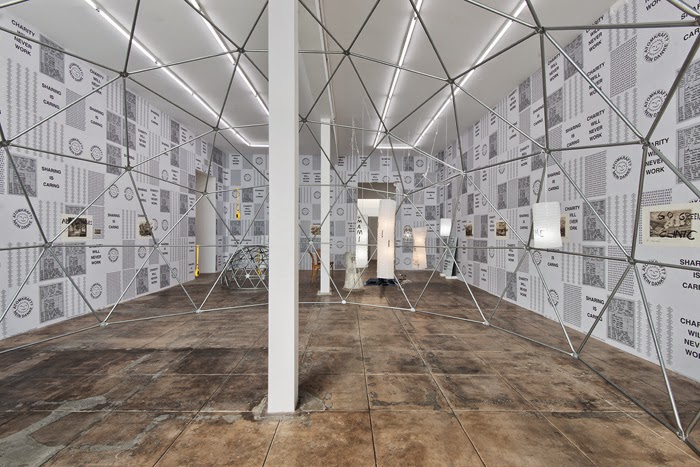 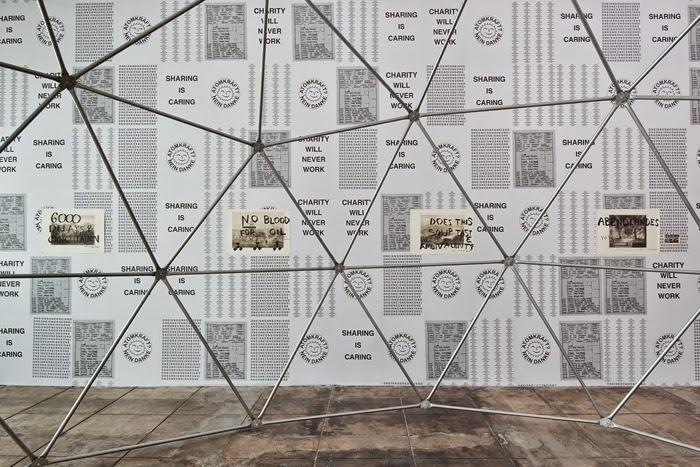 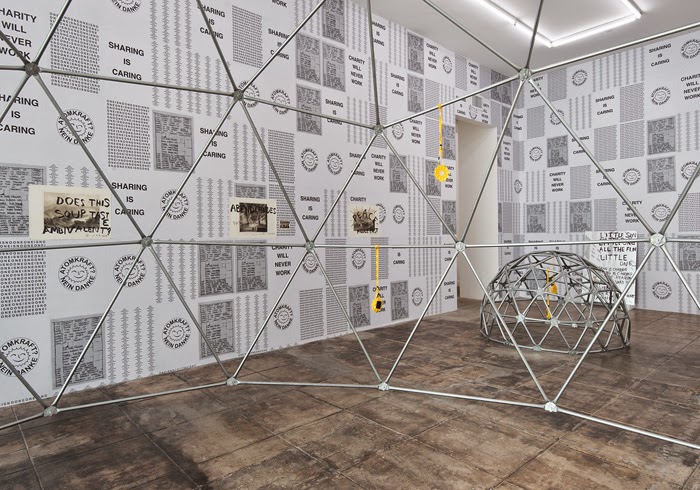 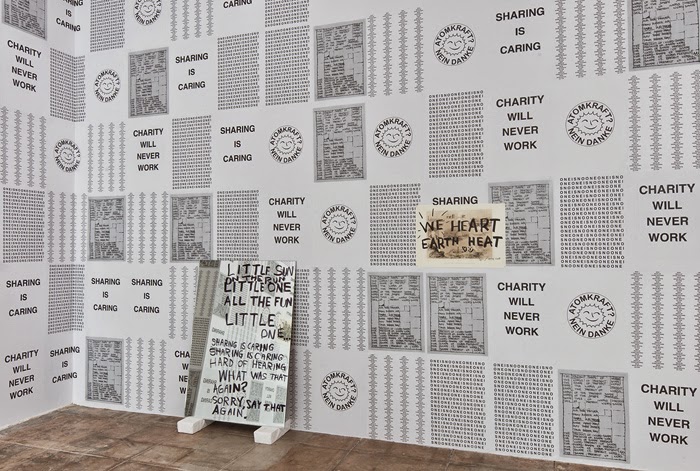 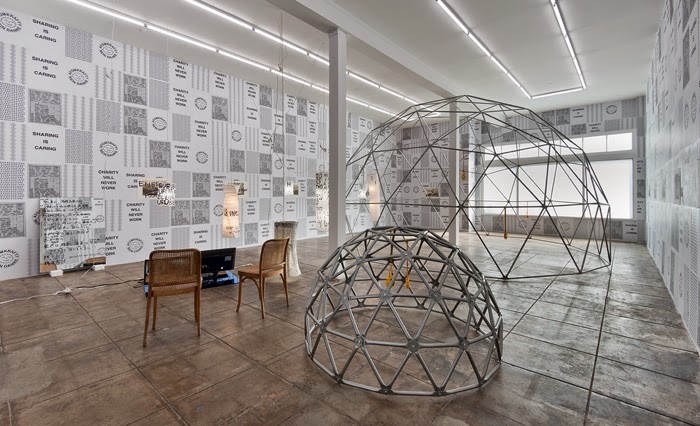 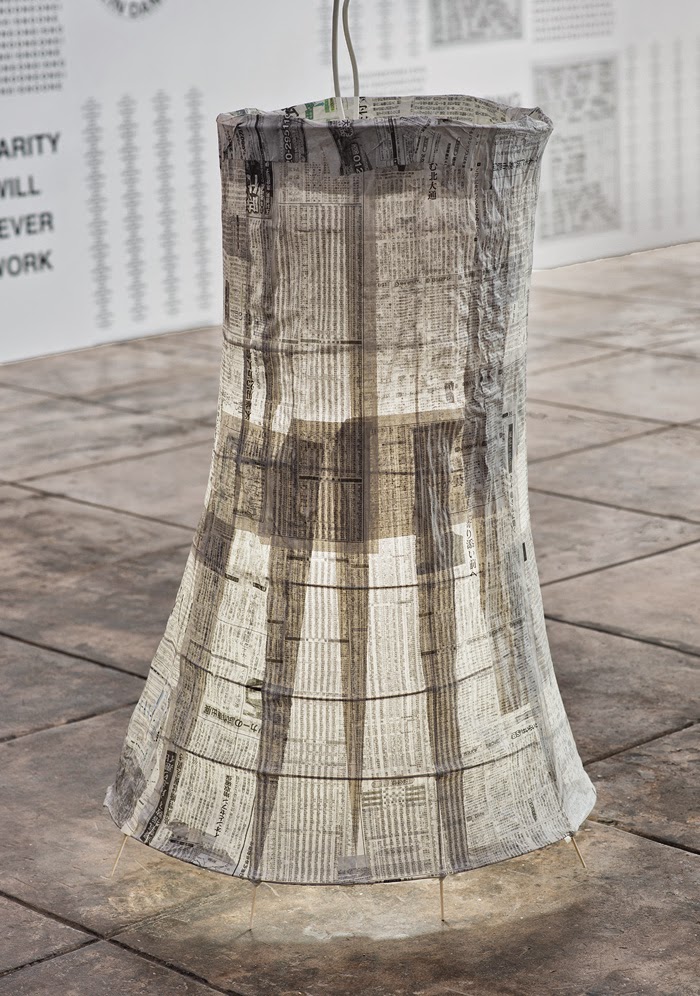 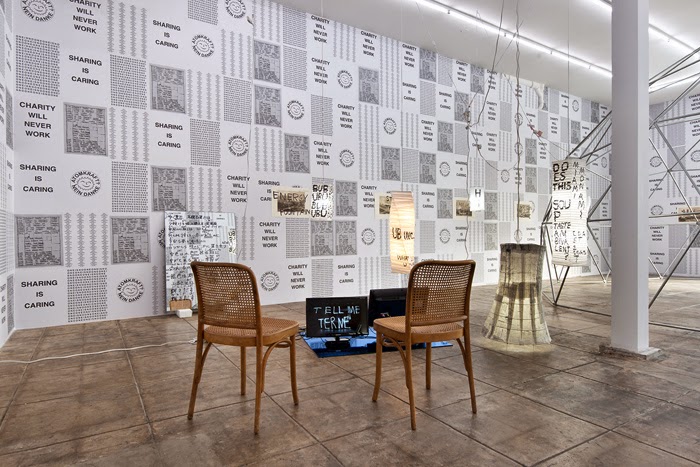 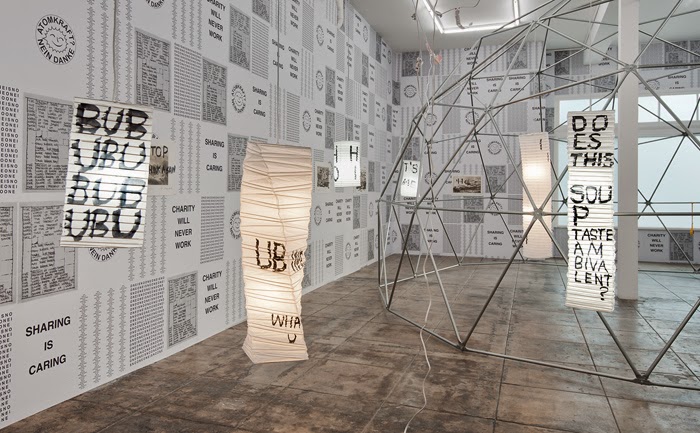 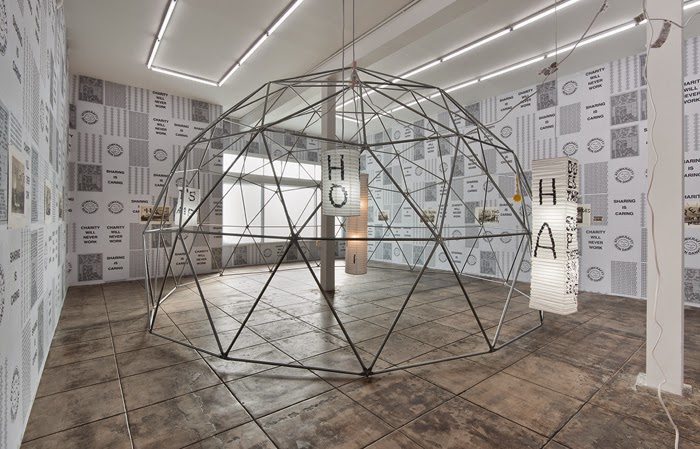 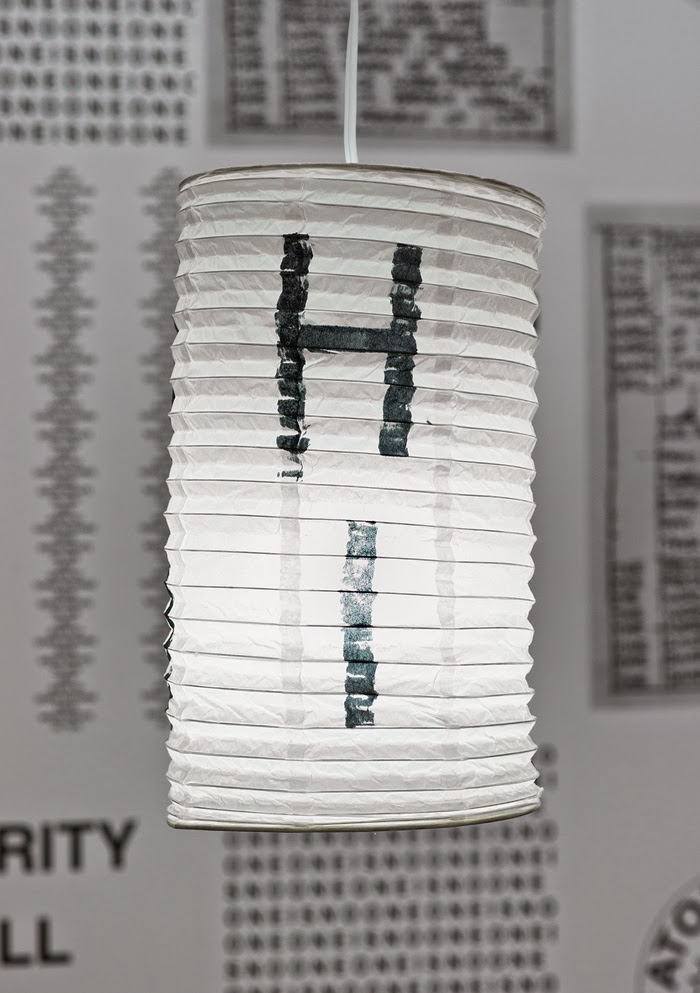 Overduin & Co. is pleased to present an exhibition by Ei Arakawa and Karl Holmqvist titled “Y.O.Y.O.G.A.L.A.N.D.” The exhibition features sculpture, drawing, poetry, and video in an installation addressing a range of subjects from global energy production—nuclear power and the potential of geothermal energy—to utopian ideals and the relationship between art and social issues. For the exhibition, Arakawa and Holmqvist have created a group of drawings using 19th century prints depicting the sites of the first geothermal power plants in Tuscany. The artists have collaborated on texts written over the prints— “Energy Fountain,” “Stop, Think Again,” and slogans such as “No Blood for Oil.” These drawings are hung over wallpaper Holmqvist created with Arakawa. The wallpaper consists of a selection of repeated posters pasted from floor to ceiling. The posters present a range of material from Holmqvist’s own writing to borrowed texts and slogans such as the infamous 1970s anti-nuclear power logo “Atomkrafte? Nein Danke,” “Sharing is Caring,” and “Charity Will Never Work.” Also included is one of Brion Gysin’s permutation poems, in which the words of a repeated phrase are rearranged with each iteration. Holmqvist’s personal slogan which has appeared in his work for many years is “Give Poetry a Try.” Throughout the gallery a tangle of extension cords link a group of bamboo and rice paper lanterns. The “Nuclear Lanterns” are made in the form of nuclear reactors from Southern California’s San Onofre reactors, to the reactors of Arakawa’s hometown of Fukushima. The hanging lanterns illuminate words or phrases such as “Invention/Inversion,” “It’s Me Time,” and “Does This Soup Taste Ambivalent?” referring to Arakawa’s 2014 project with his brother, Tomoo, for the Frieze Art Fair in London. The brothers, working as UNITED BROTHERS along with their mother, served soup made with produce from Fukushima to fair visitors. A large steel geodesic dome built to reach the ceiling of the gallery evokes the utopian theorist Buckminster Fuller and is constructed to allow visitors to scale the sculpture as one would the play structure of a public park. A smaller model of the dome sits beside it. The double domes echo the shape of the reactors at San Onofre. Hanging on both structures are a group of “Little Sun” solar powered sunflower lamps by fellow artist, Olafur Eliasson. Two video works titled “California Scenario” and “We Heart Earth Heat (Poetry Journey)” follow the artists as they visit geothermal hot springs in Europe and Japan. “California Scenario” begins with images of Arakawa soaking in the thermal baths of Fukushima and then shifts to scenes of the artists in repose at a sculpture garden designed by Isamu Noguchi. The garden, also titled “California Scenario,” is set amidst the buildings of a corporate business park in Orange County. From there, the video tracks the artists as they travel on to San Onofre, the surfing mecca and site of twin domed nuclear reactors that are currently being decommissioned. The exhibition also features a video by Holmqvist titled “A IS FOR A=R=A=K=A=W=A.” The video displays a line of white subtitles on a black screen while Holmqvist recites a text in his characteristic slow and steady monotone, with equal emphasis on each word, and each letter of each word. As one reads the text, the voice recites, “THE ARTIST IS PRESENT. SCULPTING WITH SOUND…ACTIVE AND PASSIVE. LETTERS AND LINES…IT’S THE THOUGHT THAT COUNTS.”
Tags Lazy exhibitions
Newer Post Older Post Home