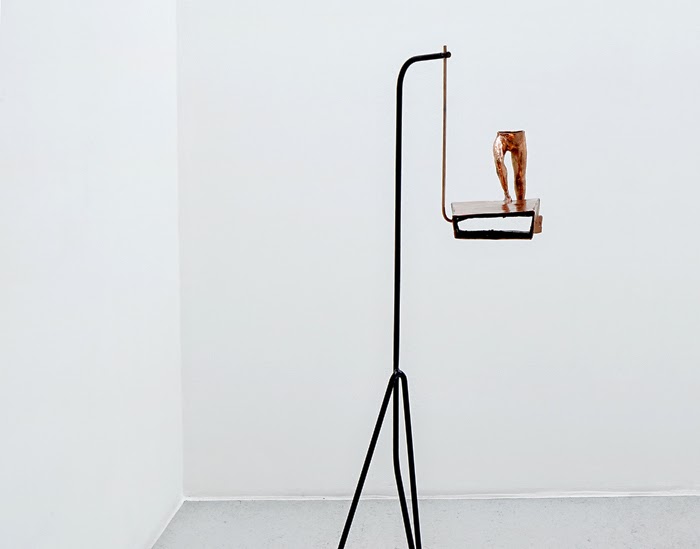 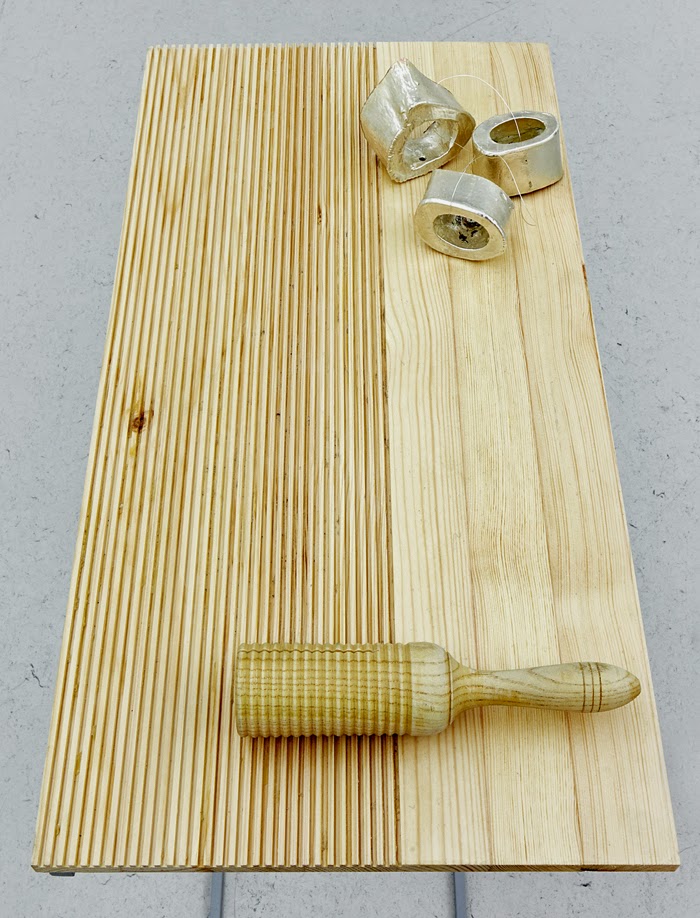 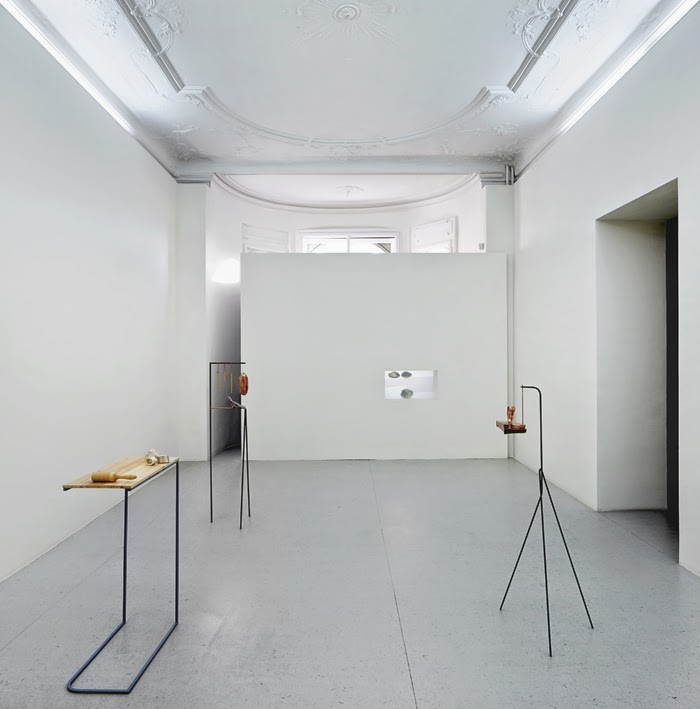 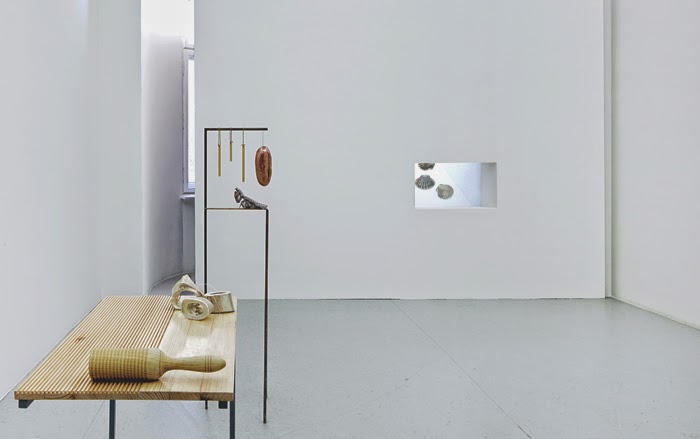 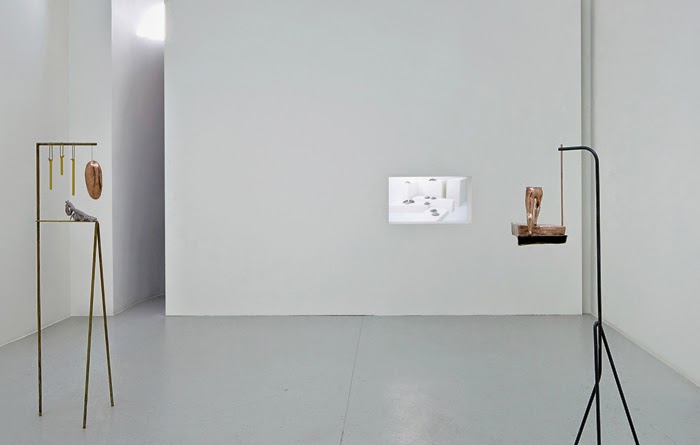 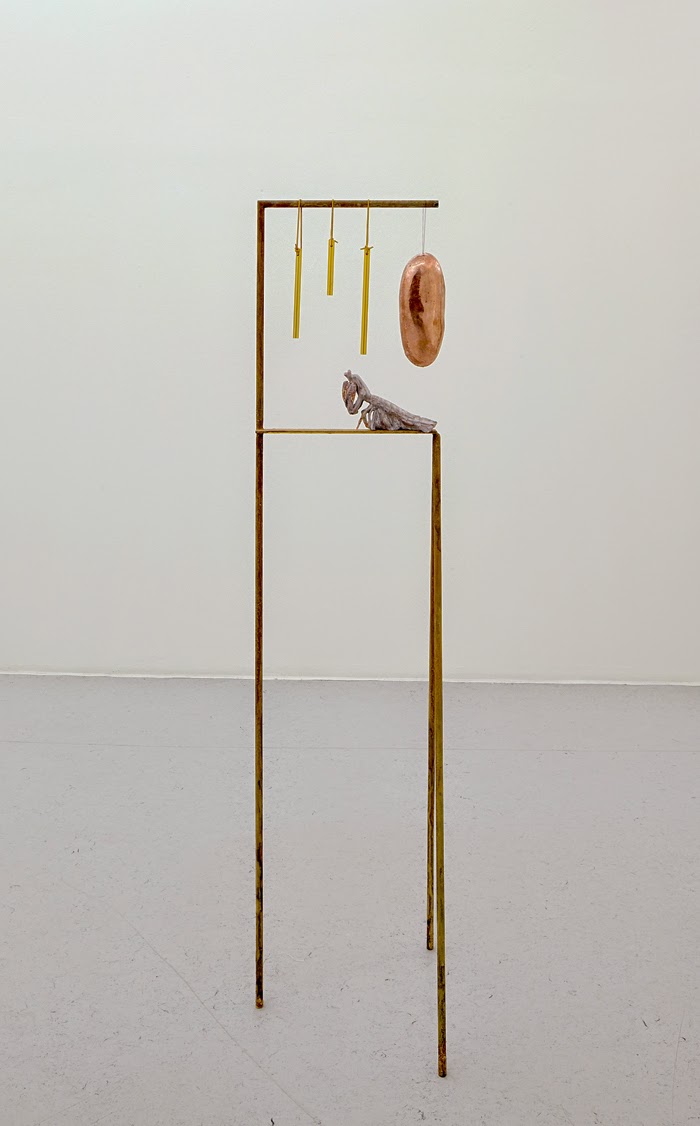 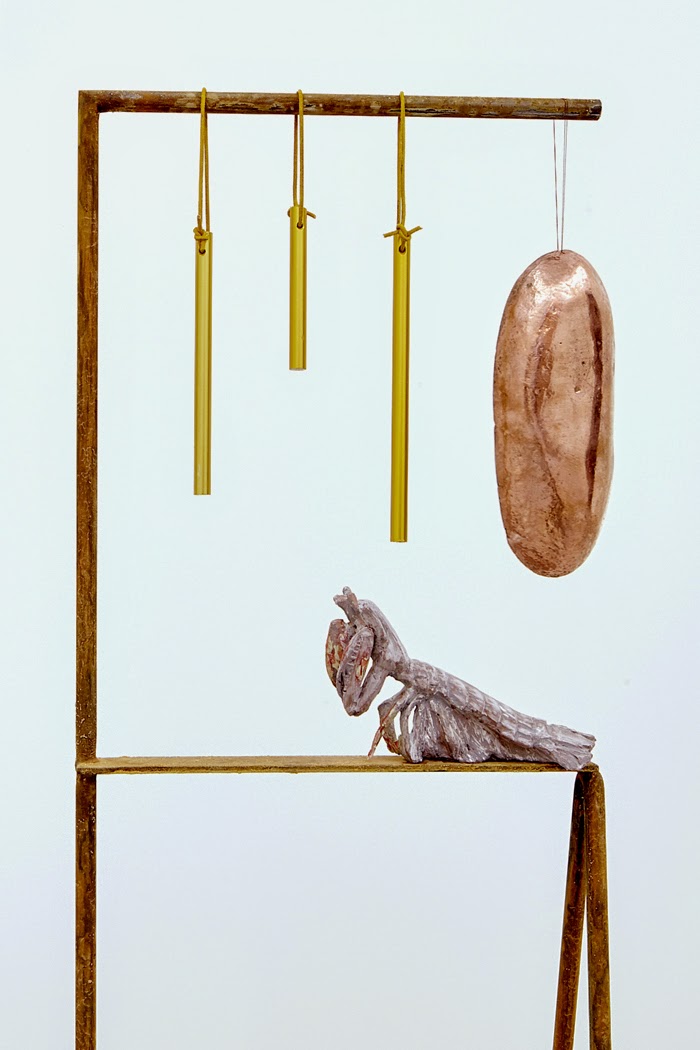 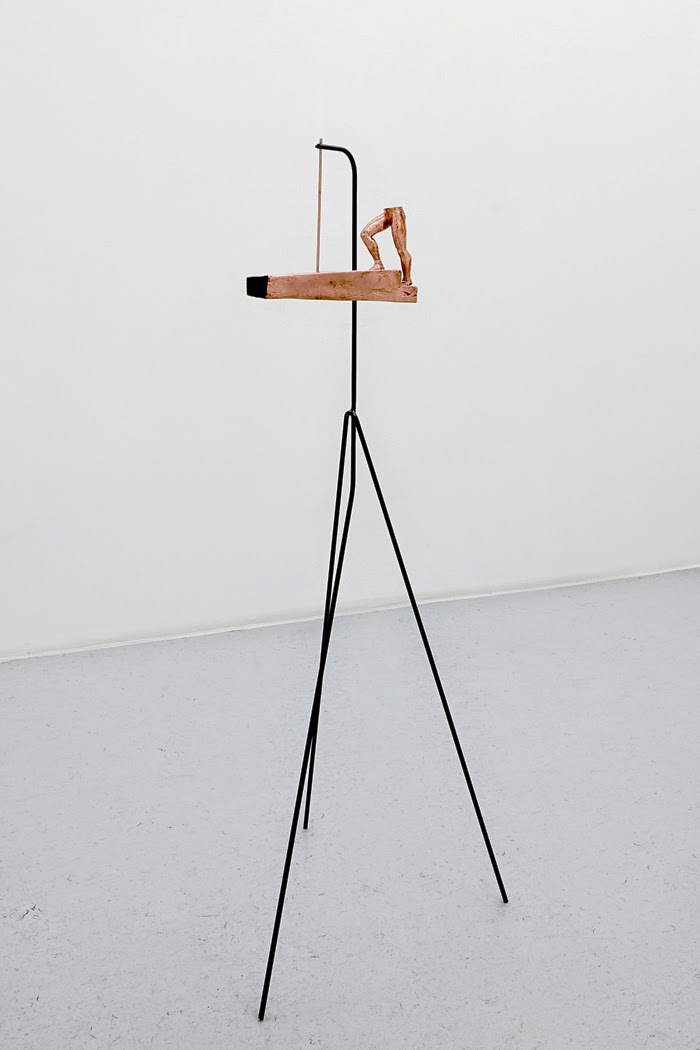 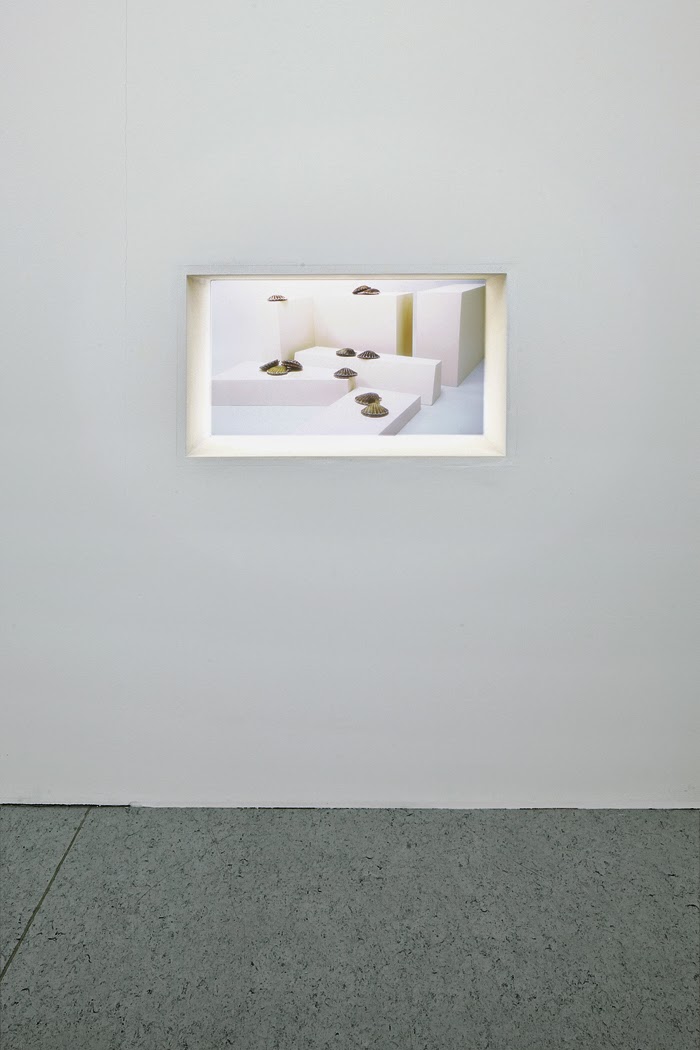 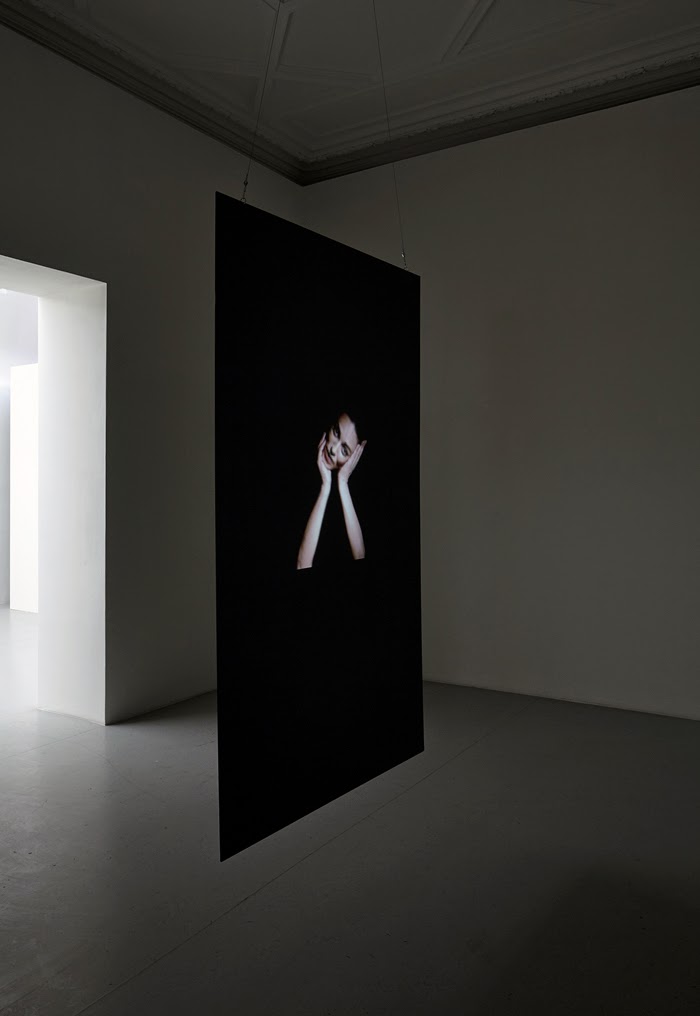 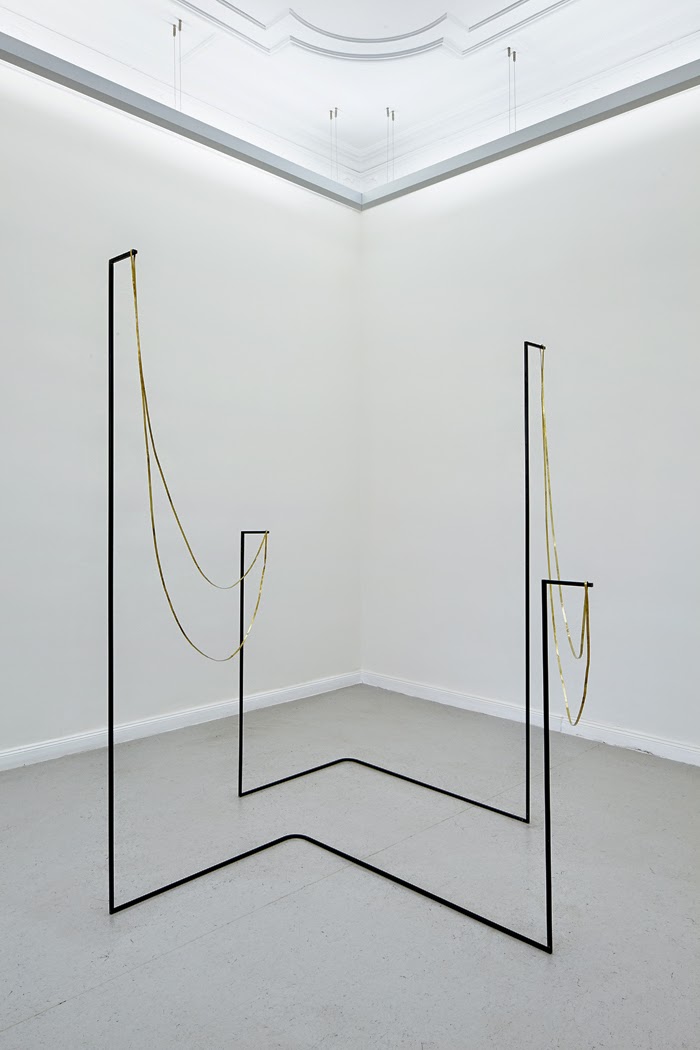 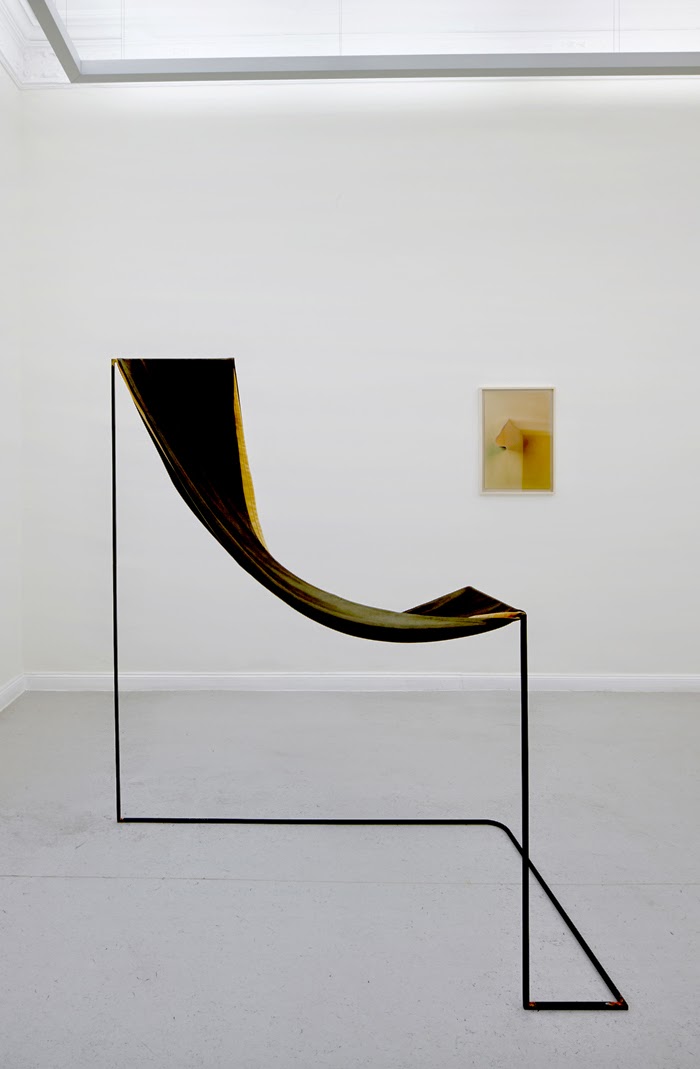 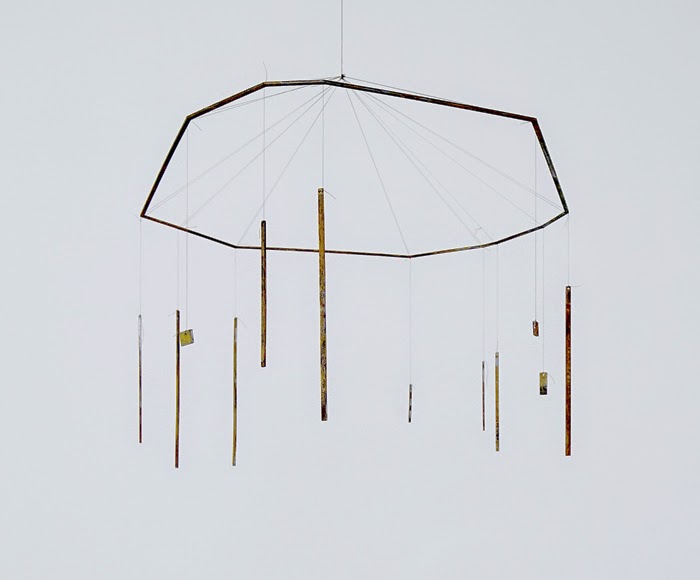 The work of Athanasios Argianas thrives between media. He makes objects which encode pieces of music he may have composed in the past, and designs objects to be used as structures for performances in the future – and vice versa. At the last Performa Biennial, for example, he made slides of tree branches, which were treated as a score for a Theremin (a modernist proto-synthesizer from the early 20th century), while at the last São Paulo Biennial he presented a sculptural structure supporting dozens of meters of brass ribbons etched with a text that, once read, described a virtual object in itself.

“A Sequencer**” is the second in a series of solo exhibitions, following a first in New York last autumn, developing a new body of work. The first room is a formal study of percussion as a minimally liminal act of shaping form. A Sequencer (Yellow on Grey) is a filmed situation: a set of cream and sand coloured plinths of different shapes and dimensions serves as a landscape for scallops, alive and occasionally clacking their shells. Sometimes they do this when the camera is not looking; sometimes when the viewer is not looking. They slowly punctuate an otherwise silent film which calmly pans across this artificial landscape, in anticipation of action. Sometimes a shell falls, sometimes it seems nothing happens. Pointedly, a sequencer is a musical instrument – a machine which allows to define a sequence of parts, to form a rhythm, a song or even a whole musical work. Something which sequences events, in time. This artwork, then, is a very stretched, absurdly slow and extended version of a percussion composition, a rhythm. There is a steel mobile in the room, which is designed from this very rhythm; each vertical line of this object is encoded from the soundtrack of the film – every line is a ‘clack’ and its sonic intensity defines the length of the line. The distance between the vertical sticks is defined by the durations of silence between them.

The objects in this room are also types of absurdist invented percussion: a cast of a mantis shrimp is placed under a series of hung chimes and two cymbal-like shapes, made from copper, cast from a large stone. A hollow copper sculpture appears to mimic the form and material (and thus function) of a cowbell. A serrated surface hints at the action of grinding it, as it hosts a guiro (a percussion which is ‘scratched’ to produce noise) carrying the same serrated lines.

The second room screens Pinna. This is a film of a scripted monologue, albeit a monologue for two people. The mollusc which the script describes is never seen (although it features as the exhibition’s invite image, uncredited) but what we witness is a play of sorts – and a trick. What we think of as up is down, one is two, and the apparent action which the performers carry through mimics what it describes. The protagonist slowly spins around her own axis, eventually separating from the arms which, it becomes increasingly apparent, are not her own – we oscillate between thinking we see one or two bodies, underscoring the nature of the script’s story. Again as with a lot of Argianas’ work, this work is situated between virtual sculpture, choreographed short one-act pay, and slightly burlesque performance.

The last room presents the latest in a presentation of the series described at the outset of this text: a Song Machine, another structure supporting strips of brass, etched with text – this time two loops which intertwine two separate stands – and a “Lyrical Machine”, a structure supporting two interfolded loops of fabric, of two tones, textures and colours, providing a space to contain everything else; two loops, much like the loop that the actress in “Pinna” performs around herself, and two structures for the viewer to move around and across, in order to read the text. -