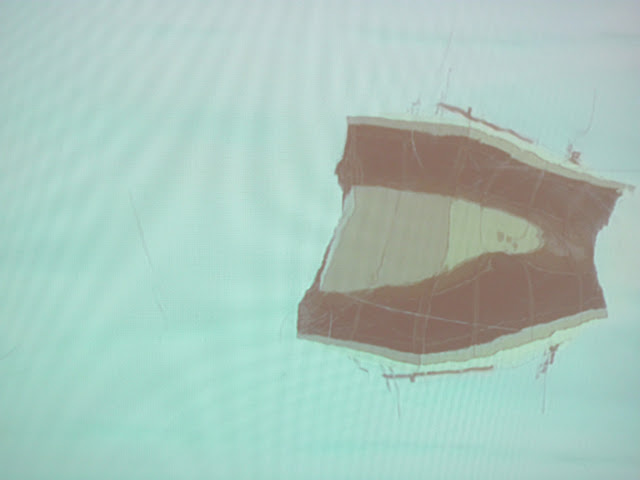 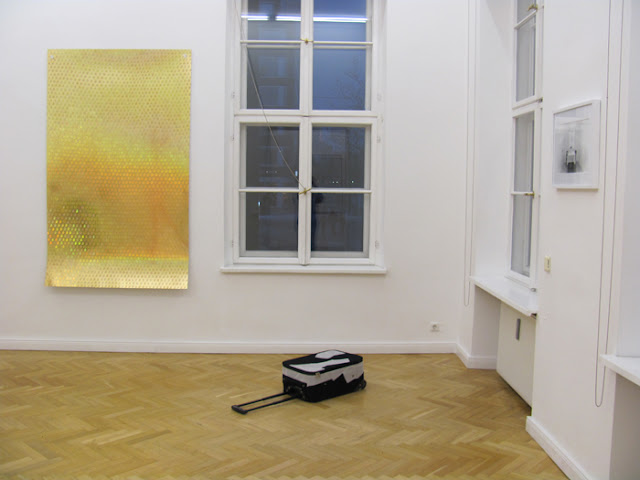 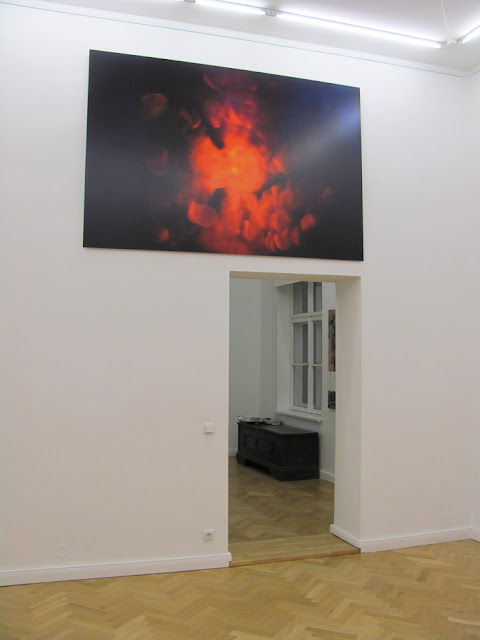 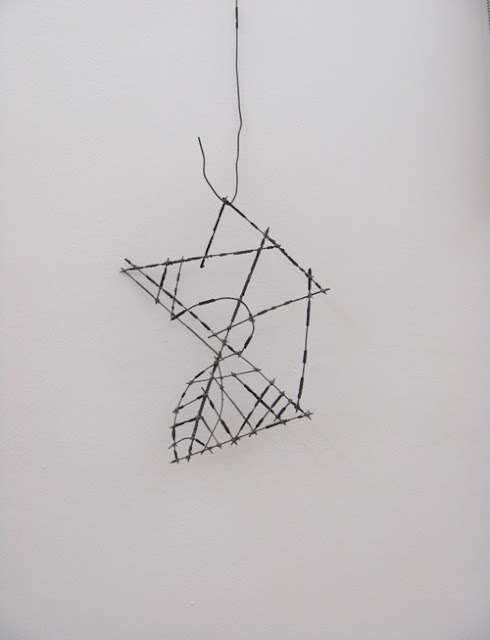 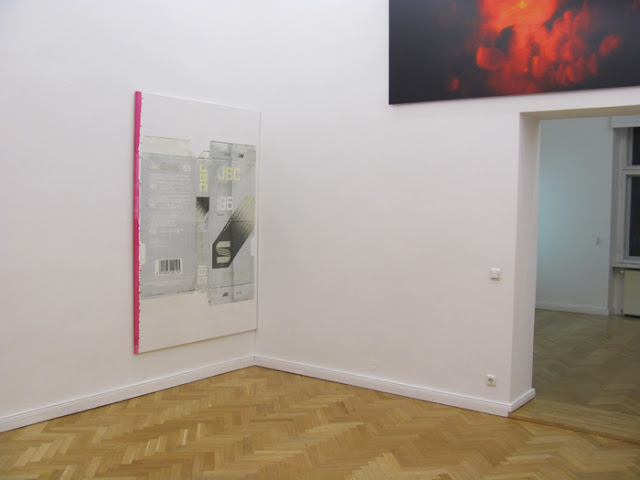 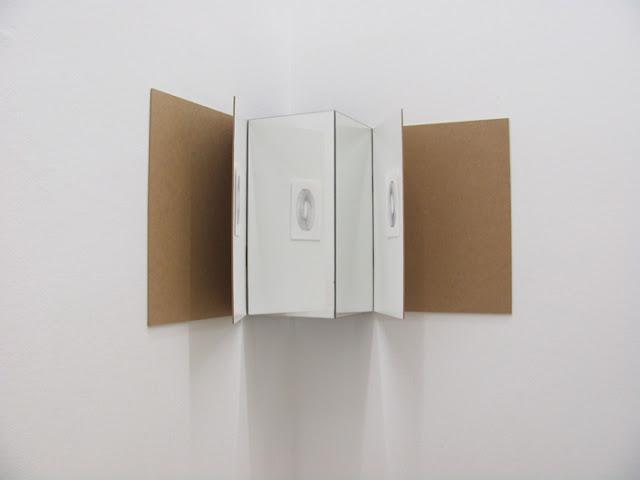 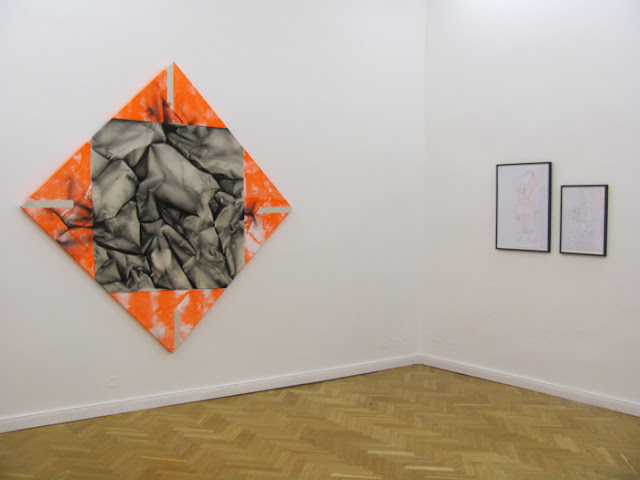 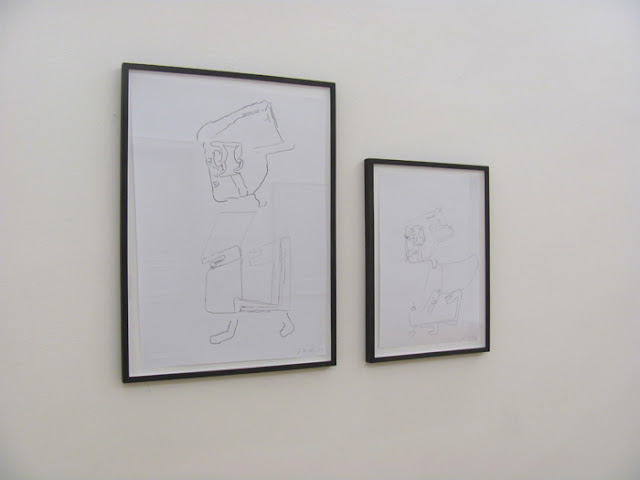 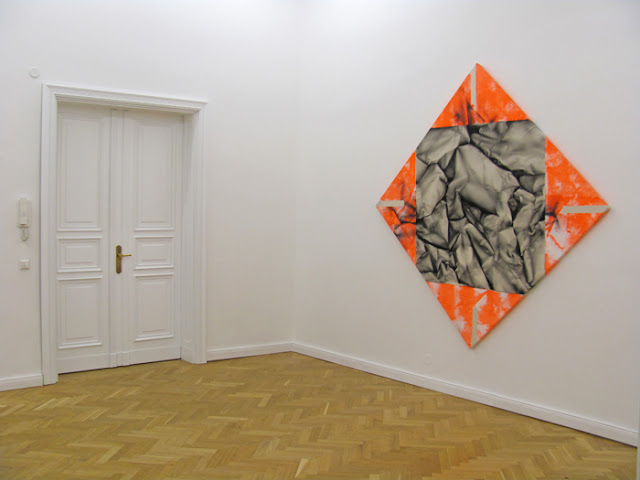 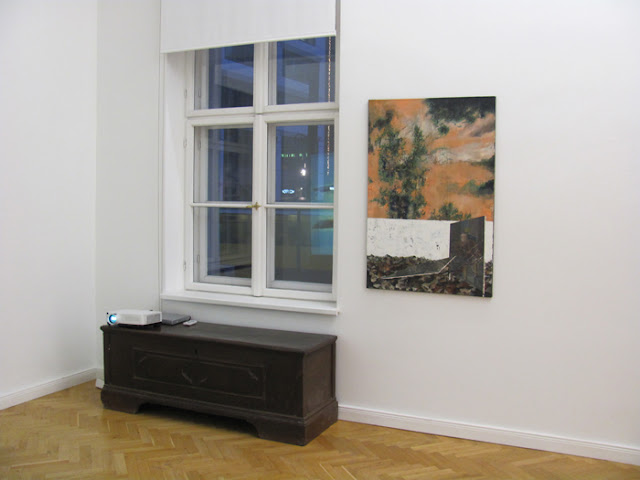 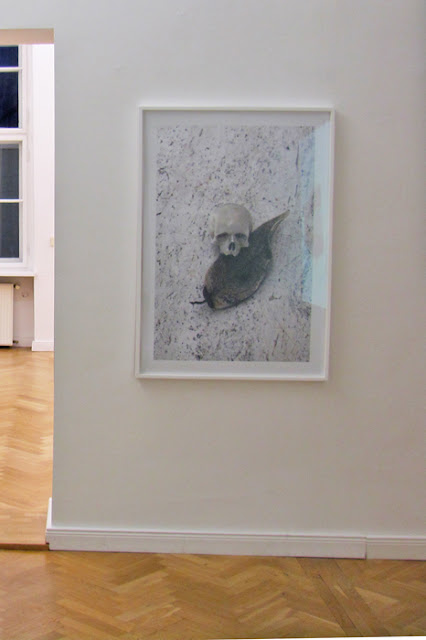 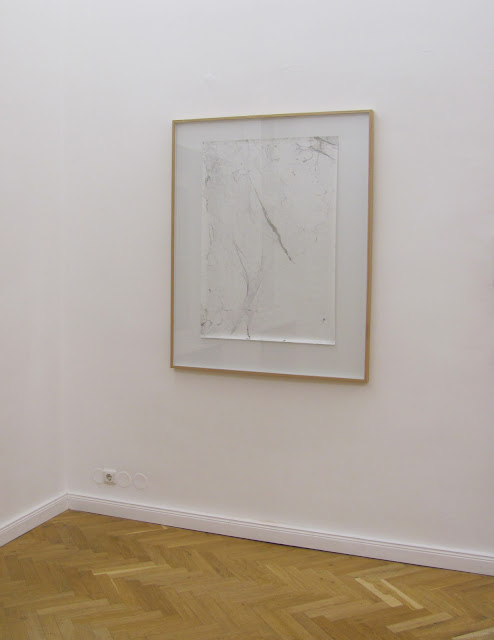 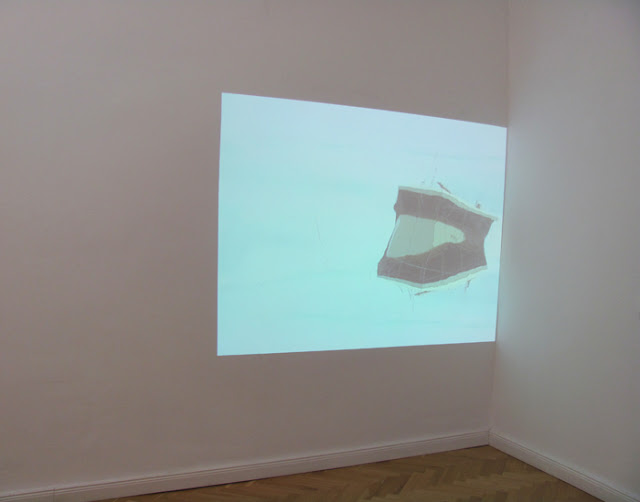 Criterion for Selection of Works


All images presuppose a system of graphical projection. In some images, this system itself is either a central visual theme of the work, or a sine qua non for the conveyance of the work's central ideas. Each work in this show pertains to at least one of these two categories.

At first glance, the image of folded fabric in Pilgrim Elite (2010) recalls the drapery of Zurbarán, but in fact the disturbing inconsistency of their chiaroscuro relations reveal multiple competing perspectives that are impossible in reality and entirely contrived by the artist. The square format, an emblem of Modernist self-referentiality because it has no vertical or horizontal, here becomes a diamond that imposes a vertical and horizontal that further ensures a sense of orthogonal depth in the relation between the central and external fields.

Because of the scale variation, and due the conditioning of our perception to associate the bigger of two images with a foreground, and the smaller with a middle or background, Heiner Franzen's pair of drawings evoke a sense of looking simultaneously at the same image at different distances mediated by a space external to the frame. But closer scrutiny reveals that these images are in fact different in ways that truncated lines in one seem to be completed in the other. This effect generates a spatial tension between the drawings in which the background and foreground appear to exchange places in continuous but irregular oscillation.


In fixing real webs to adhesive paper, Becheri's Ragnatelle (Spider Webs) destroy the regular patterns of real webs, a projection system that nature has devised in order to evade the perception of the spider's prey. By means of this destruction, the artist generates a series of accidental patterns that evoke the contrived perspective relations of painterly abstraction.

These works reinterpret a projection system virtually unknown to the Western world, which the artist encountered during this period in the Marshall Islands of the South Pacific. At first, Western visitors could not imagine how the islanders, for centuries, had managed safely to navigate vast ocean distances to reach tiny islands where a miscalculation would have resulted in certain death. But they had devised a projection system to map the subtle changes in wave patterns that became as readable thereby as paths on land.

By making an image of a flattened VHS tape box, the artist destroys our 3D perception of the source object and replaces it with abstract perspective relations that compete with the linear logo design printed on the product. Implicit in the image are the absent perspectives of the digitized images the box formerly contained.

This photo from the artist's Road Series is shot at night from inside a speeding car during a heavy rain. These conditions are selected in order to frustrate the apparatus of an automatic digital camera by confounding its capacity to generate a consistent sense of perspectival depth, so that the resulting image is so distorted that its source is unrecognizable. This departure from a literal imitation of reality is consistent with ideas implicit in traditional Chinese landscape that uses empty volumes of mist in order to obscure transitions between each of three distinct projection systems for foreground, middle, and background.

Holographic stickers used for consumer product authenticity verification ironically generate a false 3D perspective on a flat surface. But the regularity of  their juxtaposition in Laric's piece compounds this attribute with dynamic effect.


This photo is of a room in Schneider's ongoing project Haus U R, in which the raw material of the work is a house that the artist alters. By definition, a house is one of the most fundamental of all necessarily functional constructions. But the artist's intervention not only confounds the functionality of the structure, but spatial perception of its formal aspect as well. This photo appears to be that of a conventional room, but in fact it is a room that the artist has built within an existing room of the house. In almost any building, our perception of interior perspective is conditioned by assumptions about the supposed relation between an interior space, the exterior walls, and the exterior itself. By fundamentally altering this relation, the artist not only defies the house's functional design aspect, he generates a new perspective contrived by the artist.


The suitcase is part of a series the artist devised for his project for Documenta XII in 2007: Fairytale, in which he brought 1001 Chinese nationals to Kassel. The piece therefore evokes conceptual perspectives of discourses of emigration, foreign integration with Western Europe, displacement, and the problem of national identity in the face of domestic and international tension. Formally, the work juxtaposes a flat abstract projection of empty white volumes that disrupt the intrinsic perspectival dimensionality of a real object.


The artist's video of the Tegel Airport control tower and terminal is a subject whose layers of historical and contemporary political discourses become similarly layered by integrating several perspective variations into the same video image. By shooting into a mirror that in turn reflects images from other mirrors, the artist renders visible this simultaneity of projected depths and aspect ratios entirely without digital post production effects.

The body of Kunze's work reveals a range of innovations in the use of multiple perspectives, integrating thereby the perspectival advances of abstraction with the figurative image. This painting, revisited by the artist periodically between 2007 and 2012, multiplies the effect by depicting other paintings that in in turn generate further tensions of perspective not only in their image content, but also by the deployment of their borders.


The artist's photo, Nature Morte 2012-?, uses perspective to treat the subject of his own mortality after narrowly escaping death by illness this year. The three elements of the piece become a metonym for all immanent reality: animal, vegetable, and mineral; but each is related to mortality since the travertine stone is associated with tombs, the leaf has fallen, and the skull is centered in the work. But each element poses its own projection system each in tension with the other. The stone evokes the multiple artificial perspectives of "all over" composition of postwar abstraction. The spiral decay pattern of the leaf asserts a single-point perspective even on an varied surface, and the skull retains the dimensionality of the chiaroscuro rendering of old master works of which it is a stock image.


This corner object generates an illusion of 3D perspective by the conjunction of opposed mirrors and two flat images that become an integral whole only in the viewer's perception. In this way, the piece asserts the perceptive faculty not only as a passive element, but as a constitutor of perspective illusion. here, the image constituted thereby is a metonym of a critical discourse of false conventions of gender association.


Watercolor here becomes the medium to evoke a wet subject that embodies the faculty of the perception of perspective: a pair of eyes—since the perception of depth presupposes stereoscopic vision. Here, the artists evokes an attempt to focus on the tiny particles on the surface of the retina in order to suggest internalized perspectives prior to interaction with the outside world.