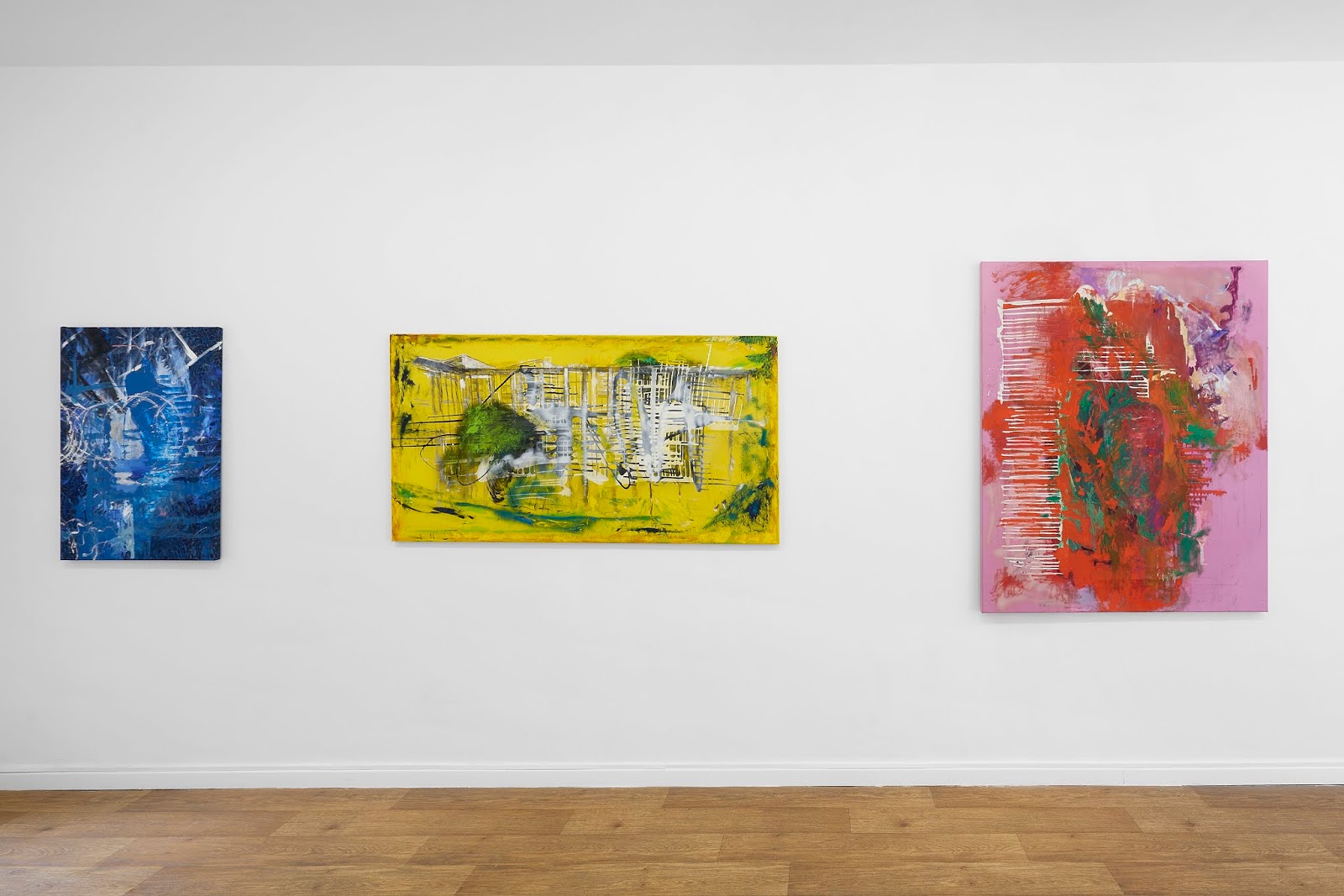 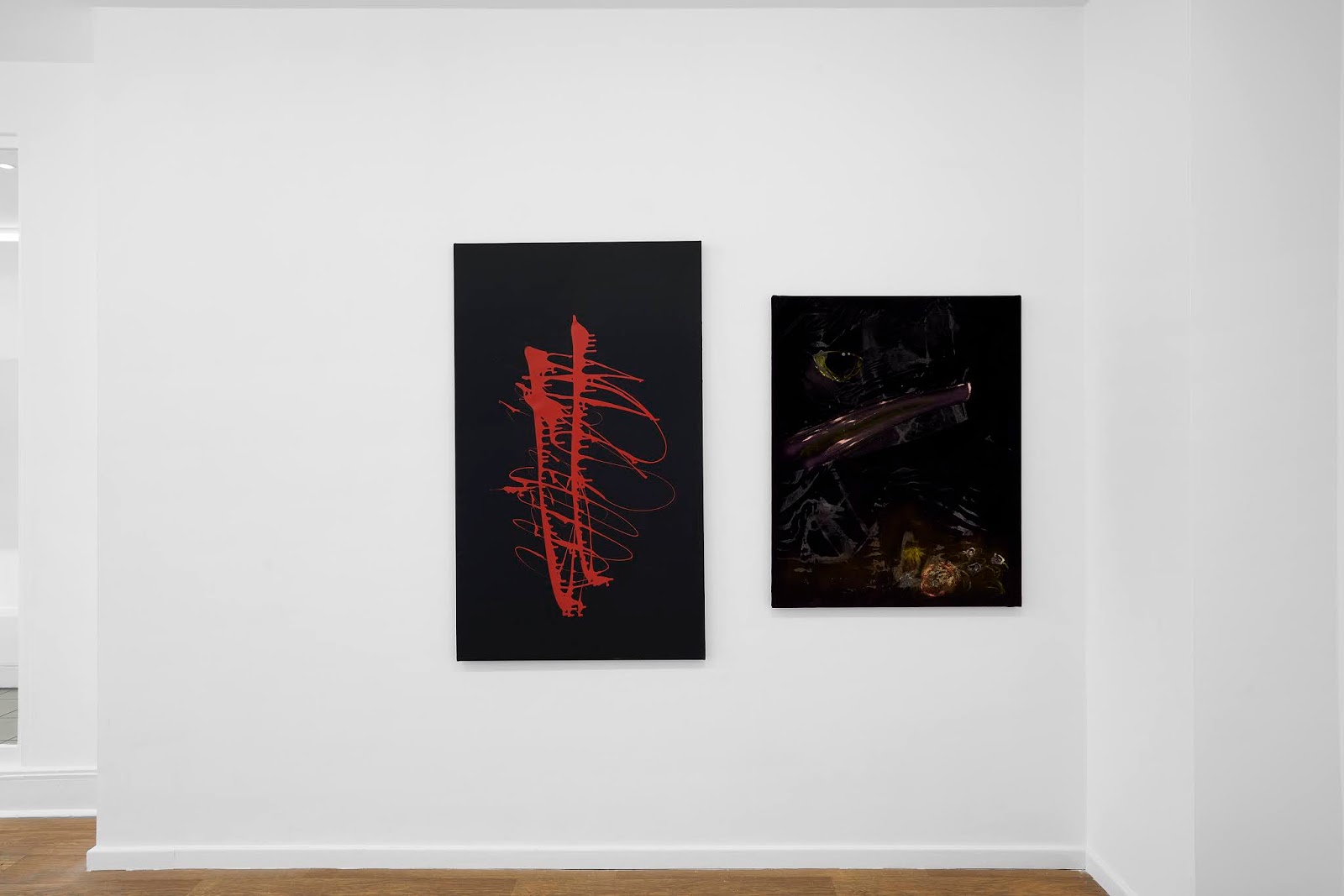 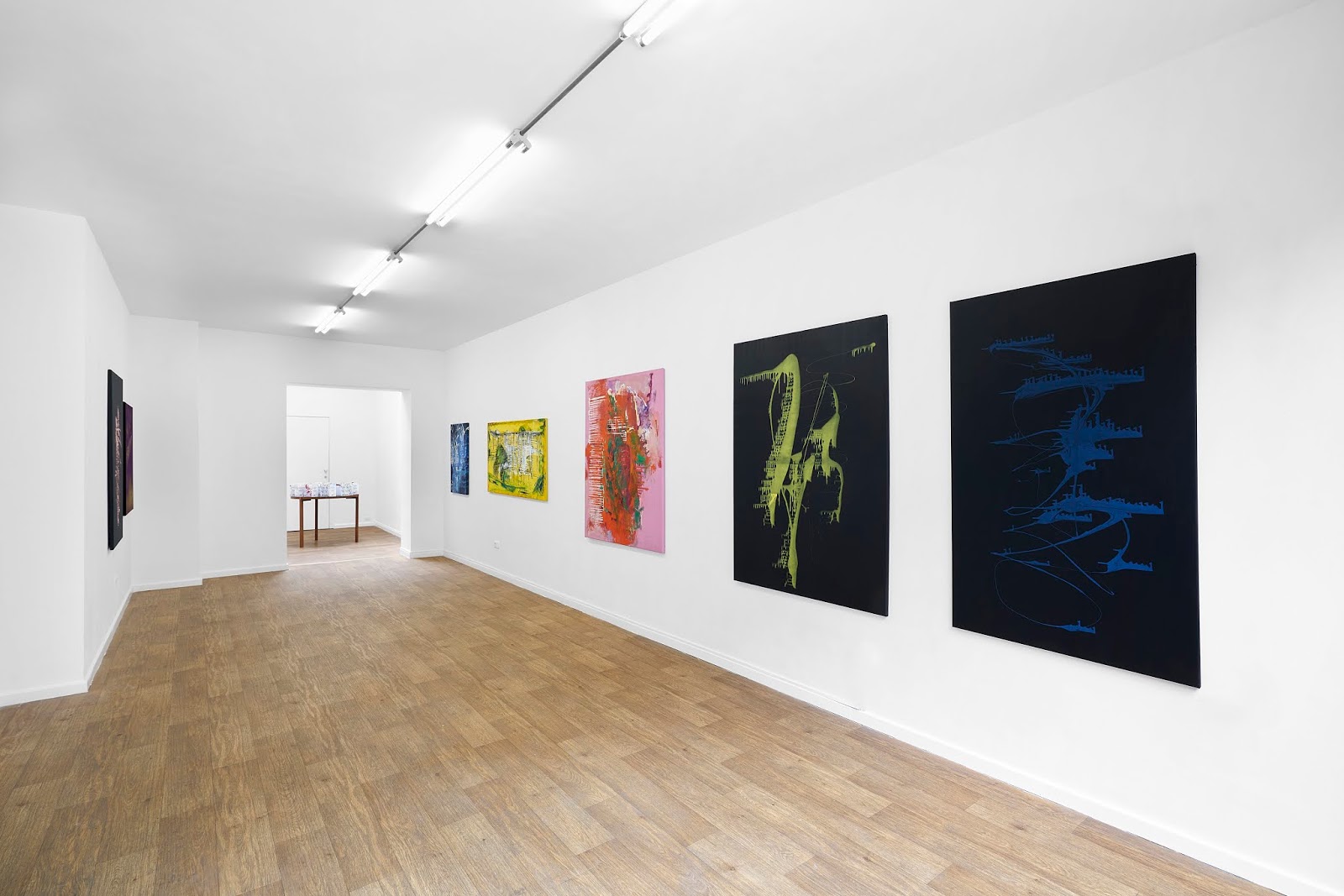 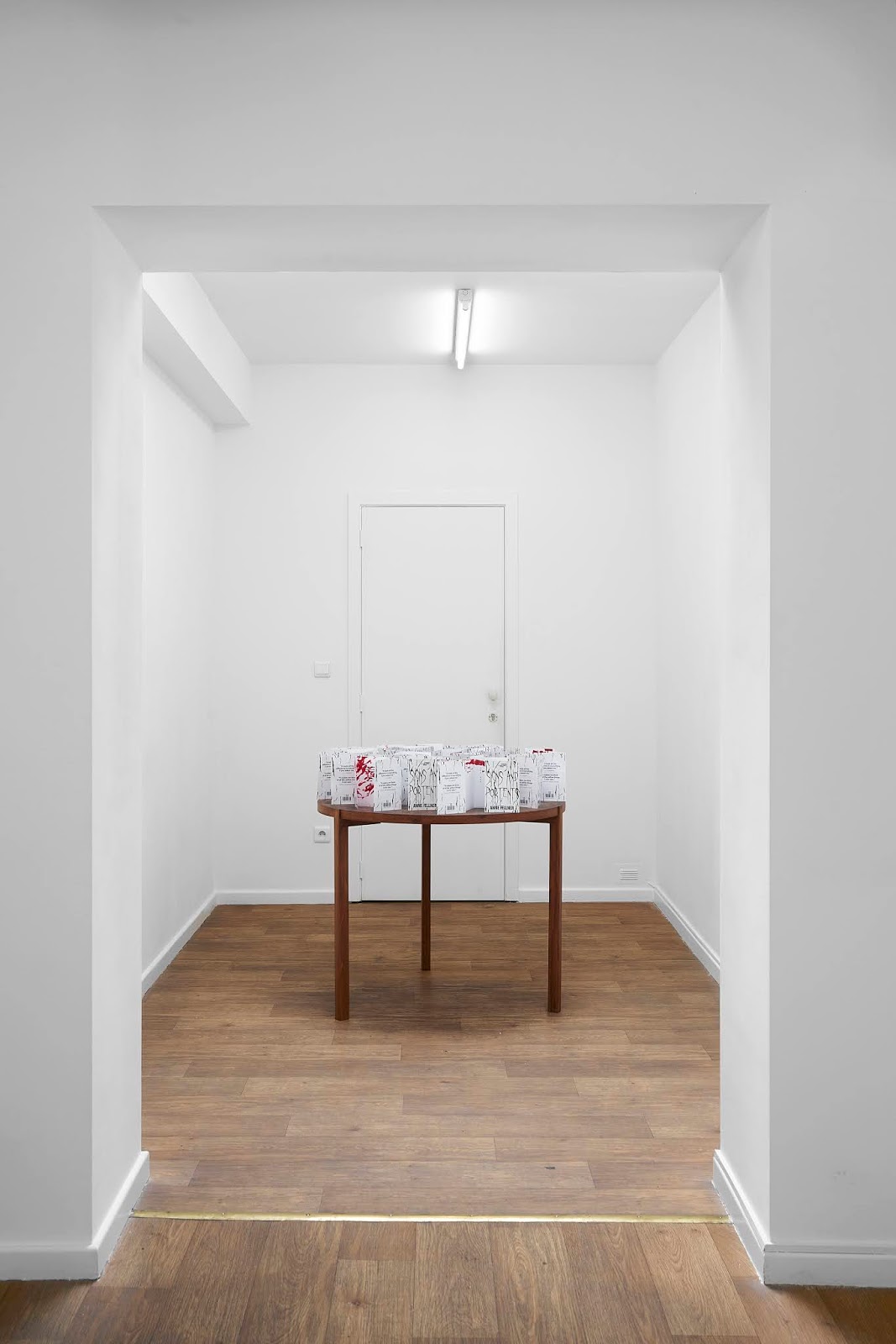 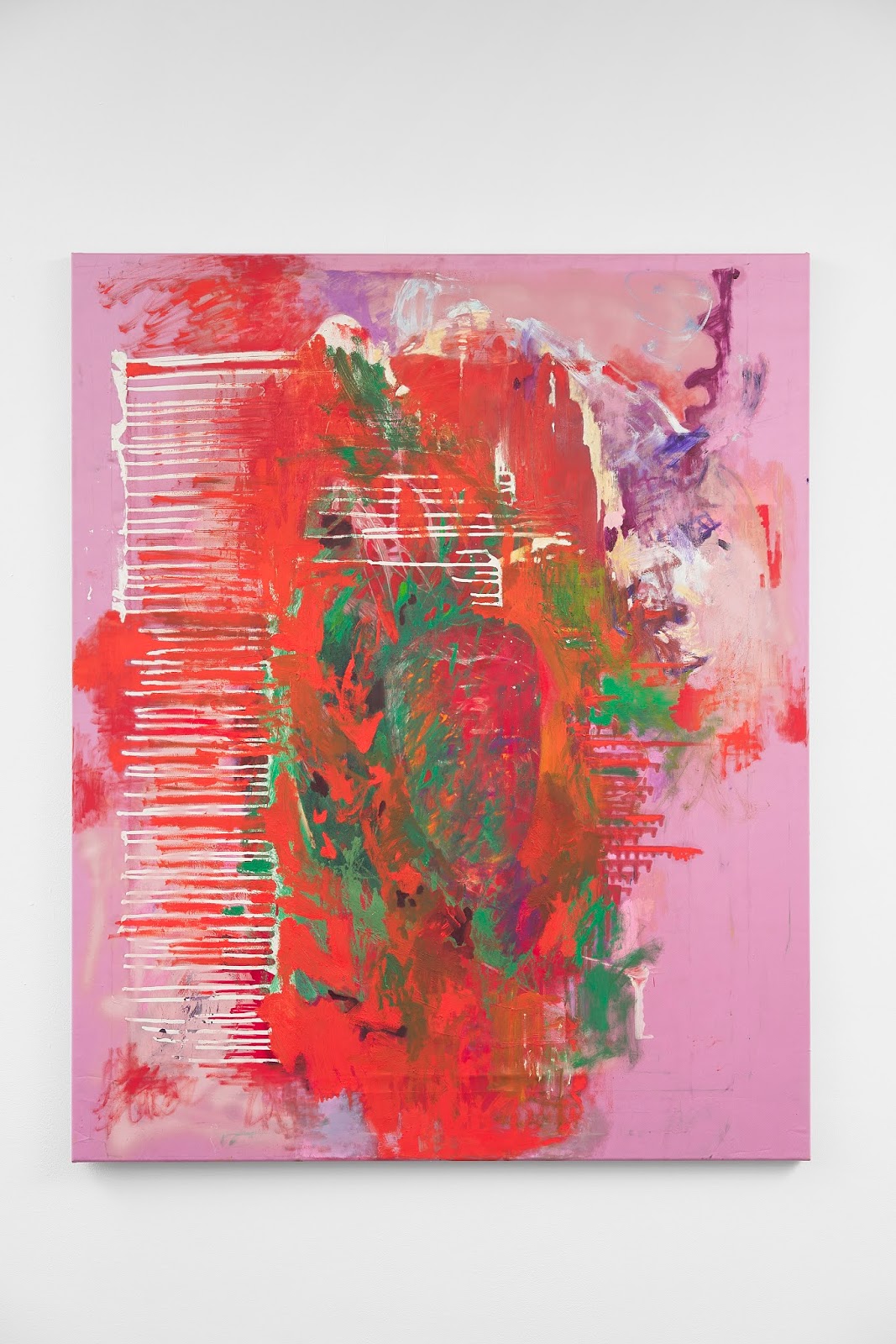 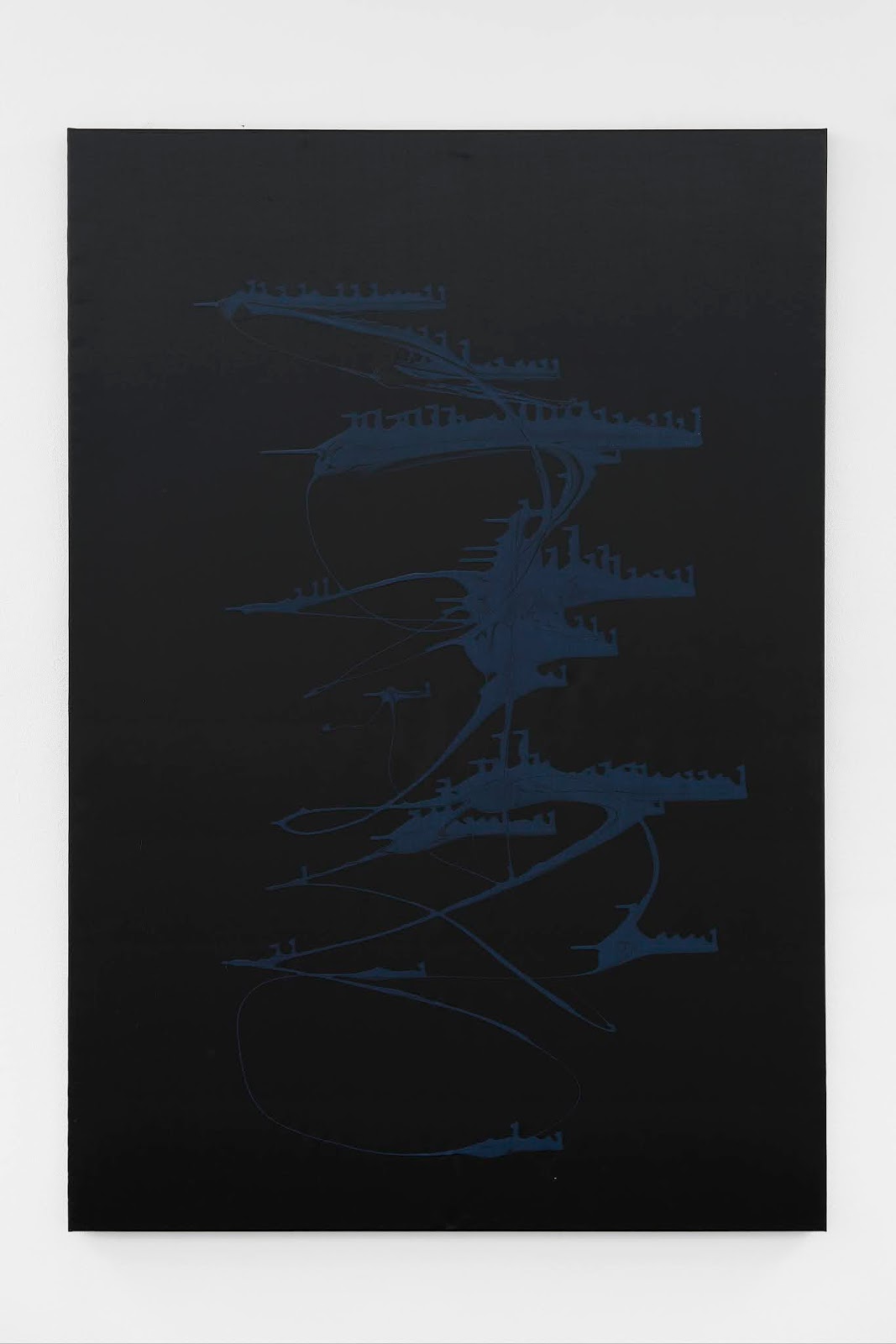 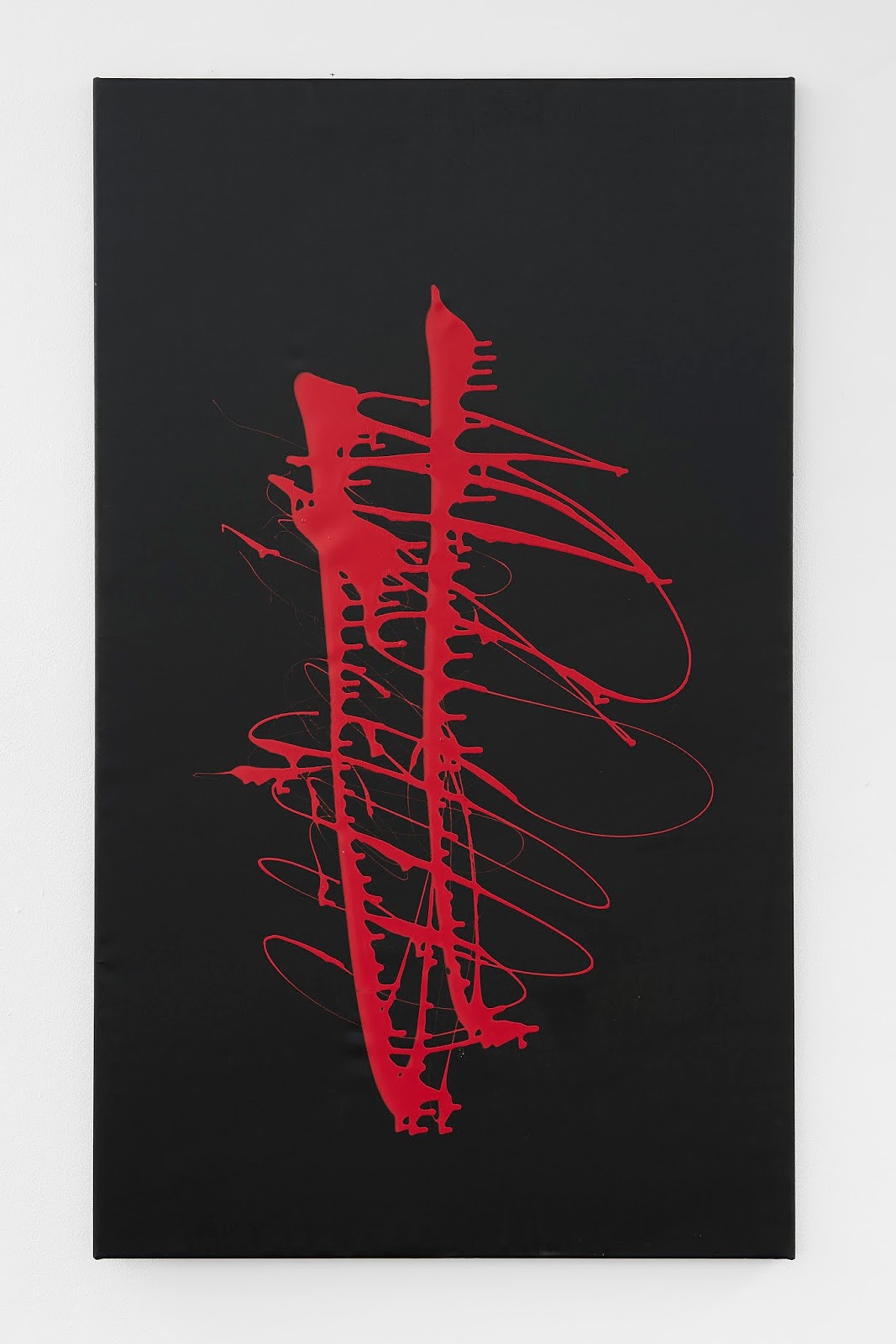 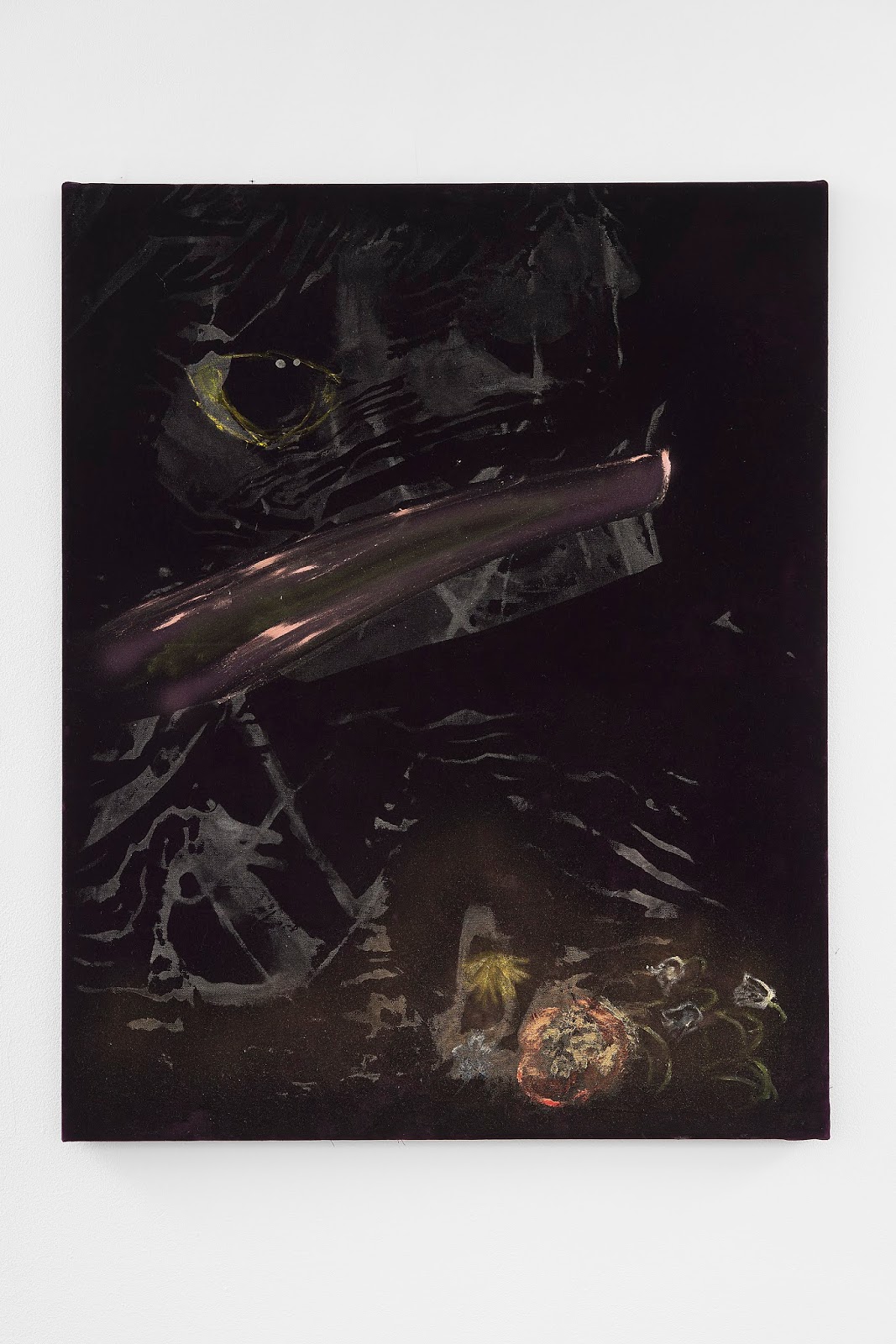 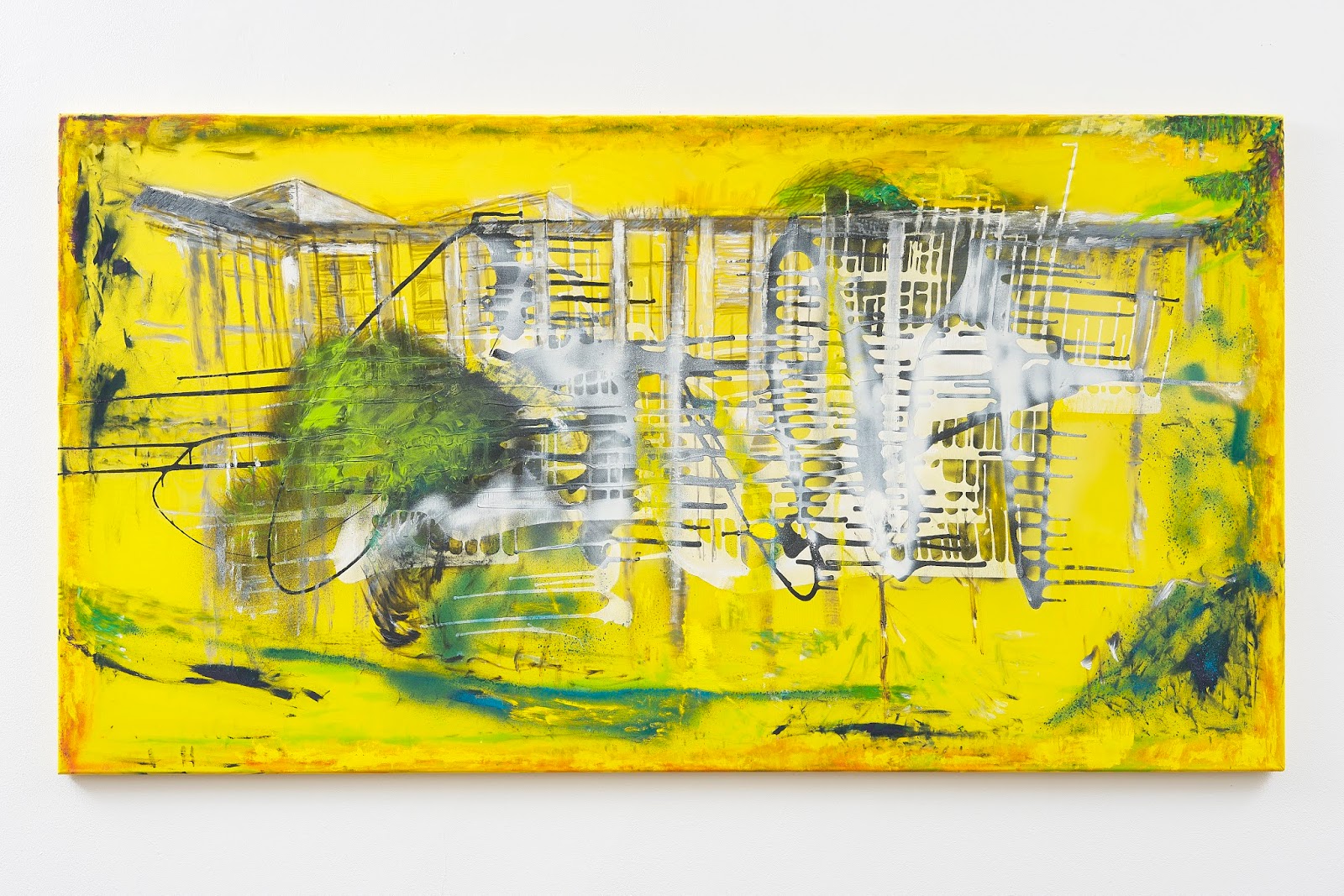 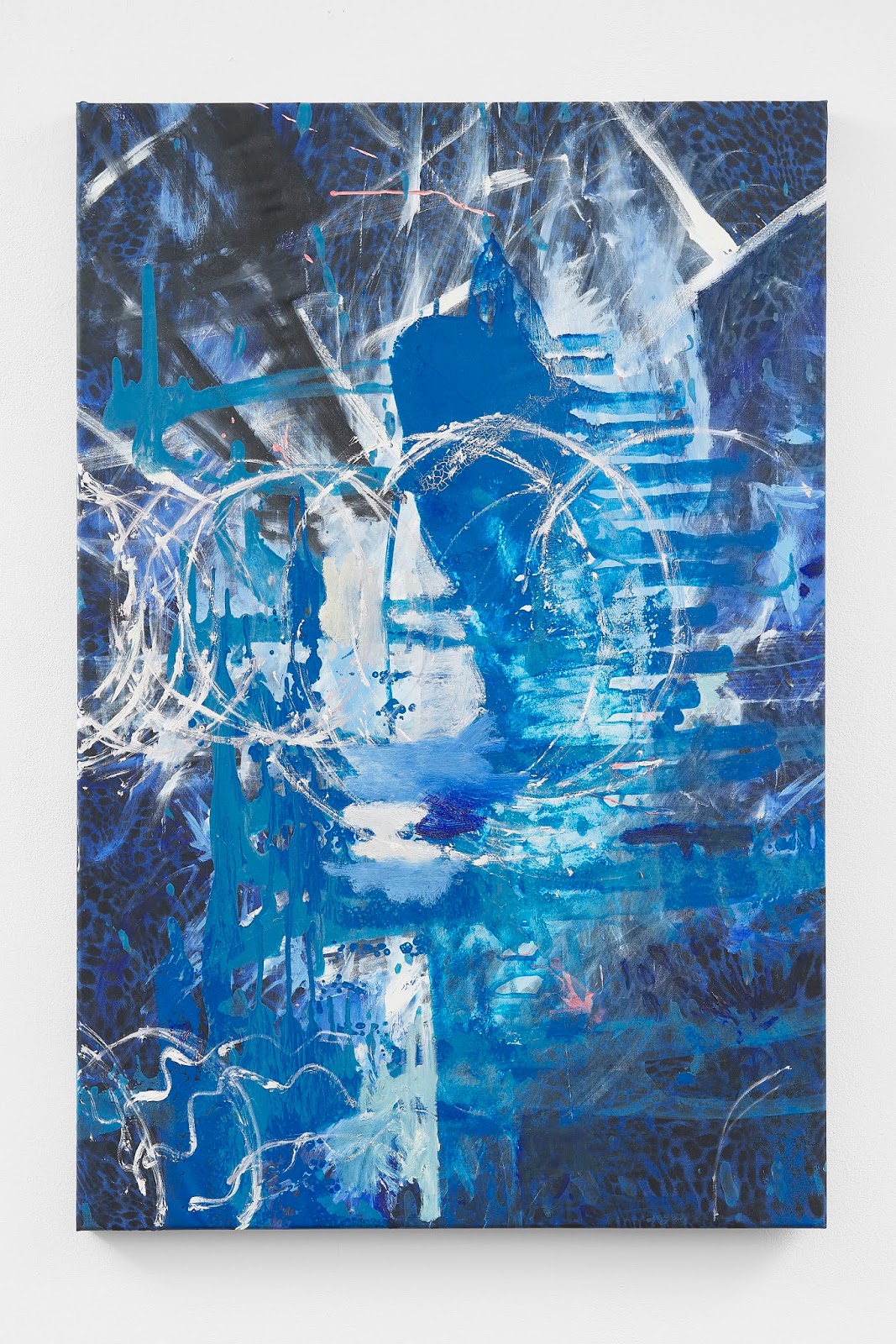 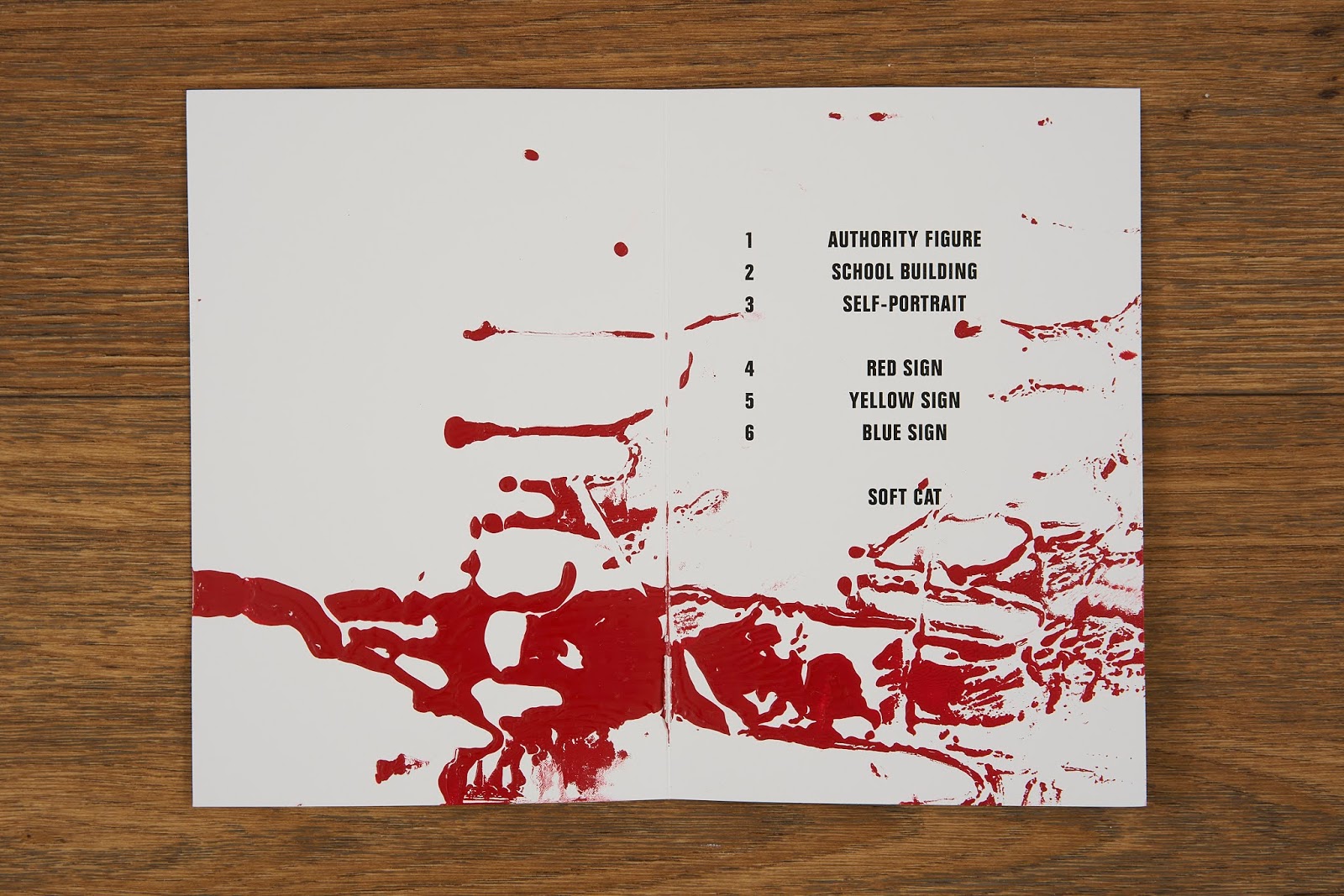 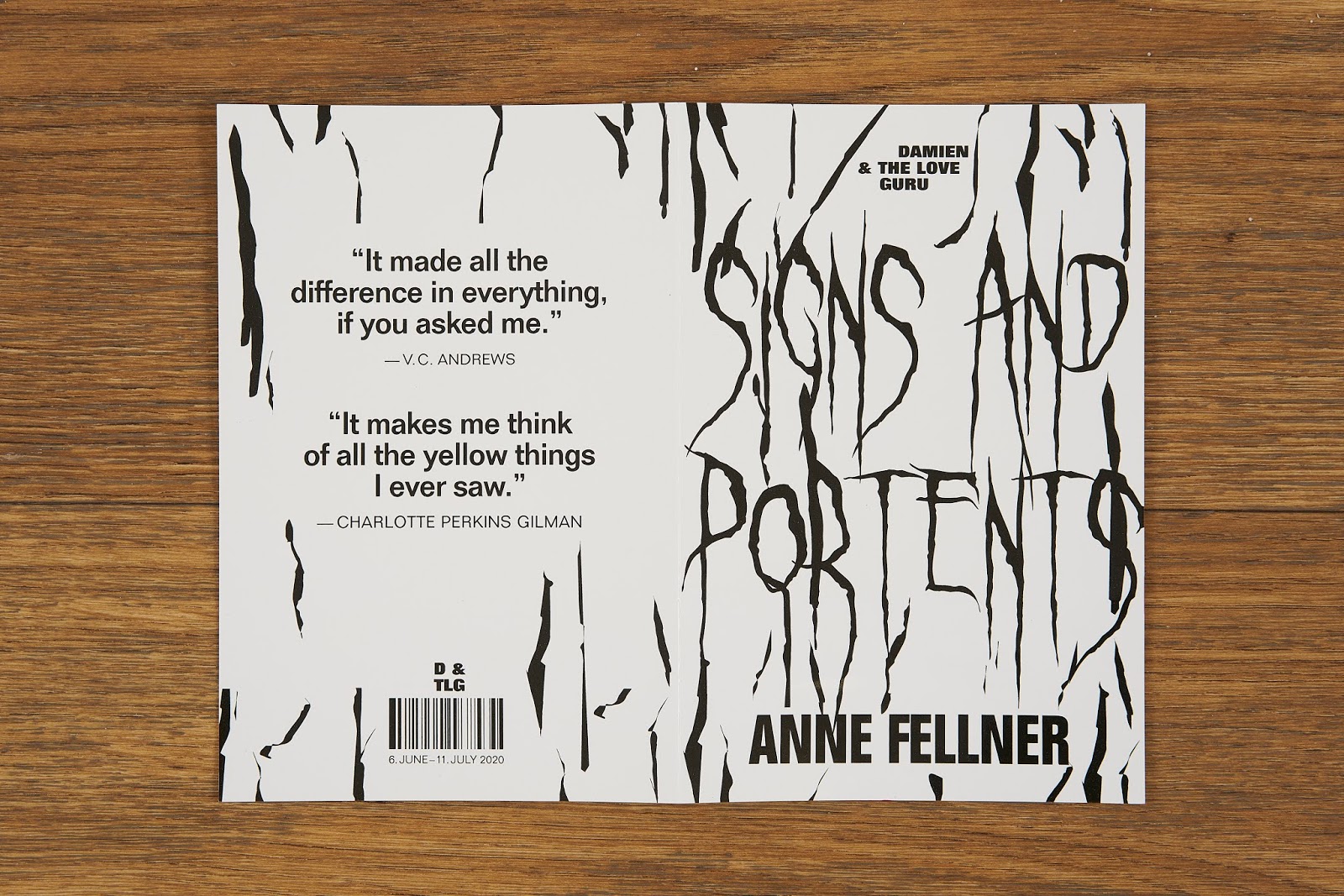 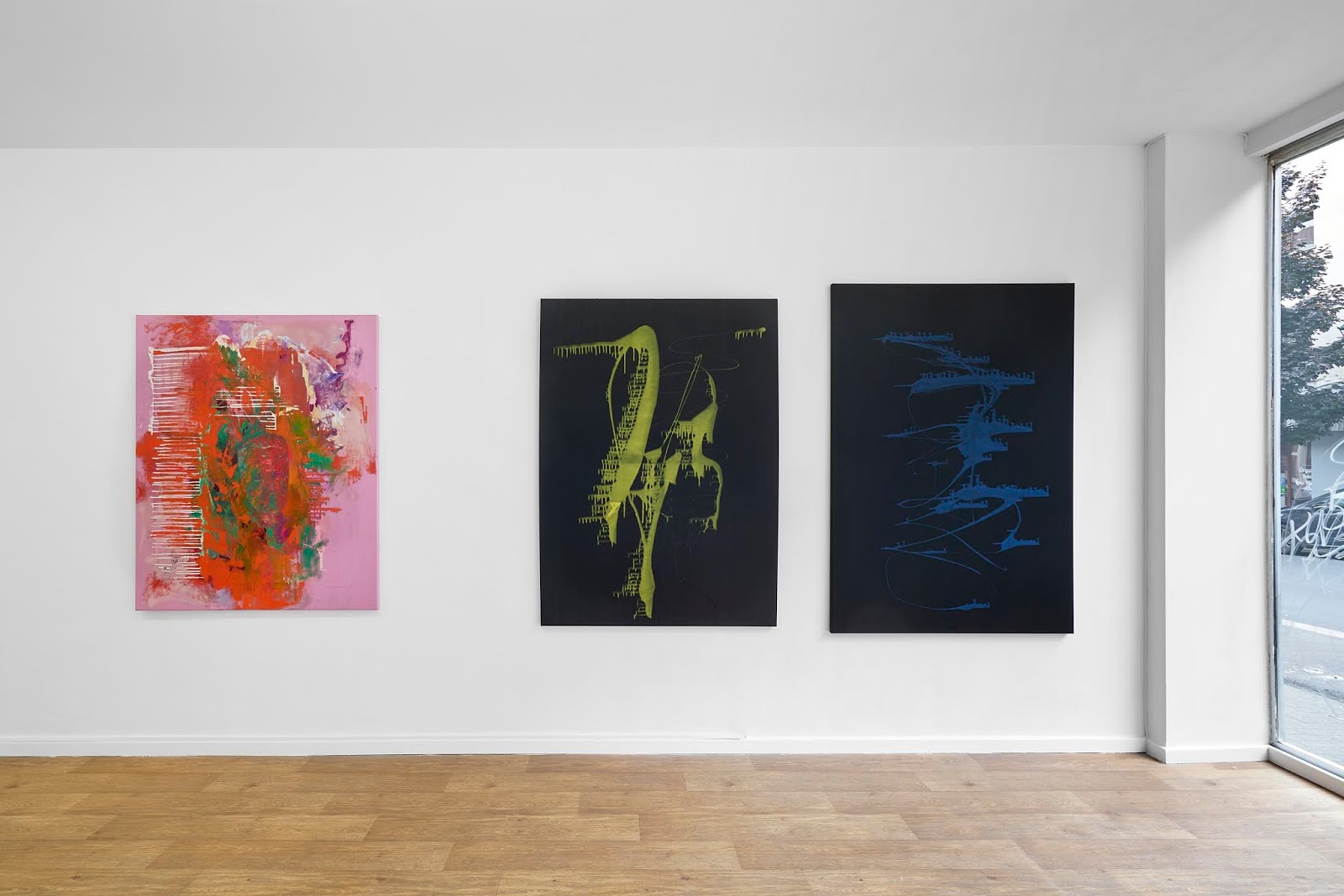 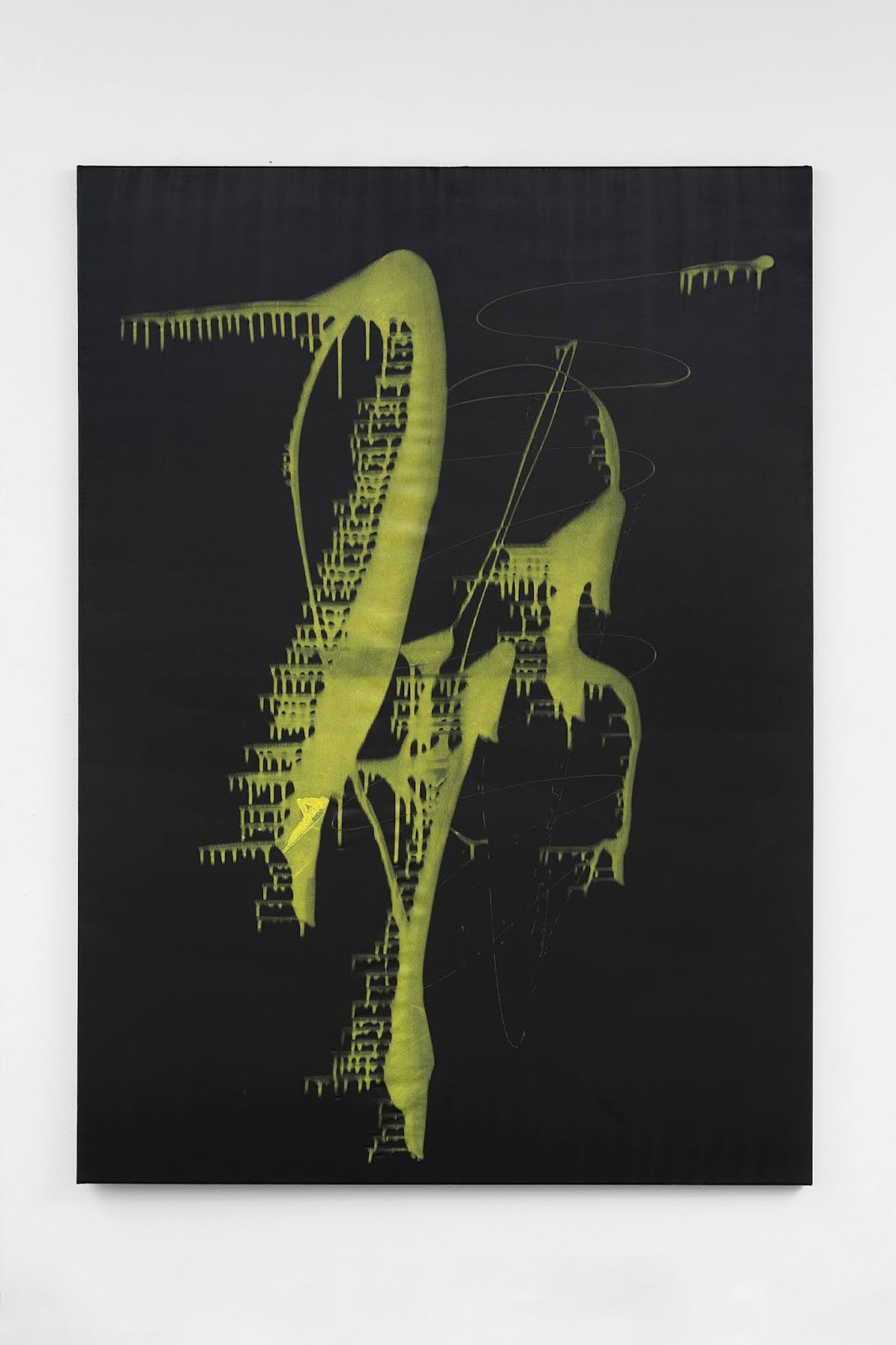 Photo credit: GRAYSC
Images courtesy of the artist and Damien & The Love Guru

My idea was to create a two-part series of “hypnotic” paintings within the parameters of certain rules. What would that be like?
The paintings would flip from abstraction to figuration and back again, like a pendulum.
Bright synthetic fabrics could function as ready-made backdrops. And feature figures, settings, motives, while relying on strong colors. Purely fiction or partly true? I might have myself a story. Signs are pure abstractions with a single color as their protagonist. Without any brushes or tools they are created by movement and gravity. The paint permeates, stains and soaks the fabric. Portents have evolved into figuration, absorbing the abstraction. The color shifts from centerstage to a device for setting the mood. And just as the words “sign” and “portent” are related, as the one contains the other, it becomes clear that figuration and abstraction also belong together. How does this work? Both sides begin with the same first step: a layer of enamel signs and maps out the expanse of textile. The more I rotate the canvas, the more gridlike the drips and the more I need to decide. How personal can a signature be when influenced by something as ubiquitous as gravity? The Portents’ colored backdrops and superimposed structures give me the ideas of what I wish to paint. Or do they? And why are all the motifs so constrictive: An authority figure, a school building, a construction of self?

When Self Help Goes Awry – A Series of Backdrops

Led by Keith Raniere and Nancy Salzman, the self-help organization NXIVM offered courses such as “Rules and Rituals” and “Civilization and Human Pain.” Within the company, Raniere went by “Vanguard”—a title it seems he picked from the 1981 Arcade game of the same name. In many courses, men were pre-sented as resolute “protectors,” while women were described as self-absorbed and narcissistic. When I started working on Signs and Portents in June 2019, Raniere was convicted of wire-fraud, sex trafficking and racketeering. The district attorney describes “Vanguard” as a “modern day Svengali.”

Svengali appears in the novel Trilby (1894) by George du Maurier. Trilby, an artists’ model, serves as a vessel for painter Little Billee’s creativity. Without any musical skill, she becomes a great singer with musician Svengali’s guidance. Under his “spell”, she falls into an amnesiac trance when on stage. Without him she fails and is unable to perform. Du Maurier considers figuration and abstraction as two distinct notions: The art of figuration is measurable in talent, whereas abstraction is pure style: Evil and inexplicable—like Trilby’s hypno-performance. What is the more preferable fate: to achieve greatness through a loss of self or be a vessel for another person’s talent?

A different type of mesmerism appears in Charlotte Perkins Gilman’s gothic novelette The Yellow Wallpaper (1892). Here, color itself has a hypnotic quality and induces different kinds of synesthesia in the female protagonist. Accordingly, she finds: “It makes me think of all the yellow things I ever saw—not beautiful ones, like buttercups, but old foul, bad yellow things.” The reader shares her experience, relating to her mental state and coming to hate that stinking yellow.

In 1978, contemporary gothic author V.C. Andrews writes a letter to her future literary agent. Pitching her new novel she writes: “This is the fictionalized version of a true story. Real children who struggled to survive under almost unendurable circumstances. Basically a horror story.” This story of incest and oppression, Flowers in the Attic, is truly nightmarish. V.C. Andrews herself becomes a valuable commercial asset and even after her death in 1986, books continue to be published in her name. These stories couldn’t possibly all be true?

It appears there is a need to fictionalize reality when things get gritty. Or the other way around, give fiction the grit of reality for that extra fascination. Spinning, flipping, gaslighting, passive aggressive vaguebooking—manipulation tactics also seem to have the best names. Or are they also just games to play?
Tags Anne Fellner, Brussels, Damien & The Love Guru, Lazy exhibitions, solo show
Newer Post Older Post Home