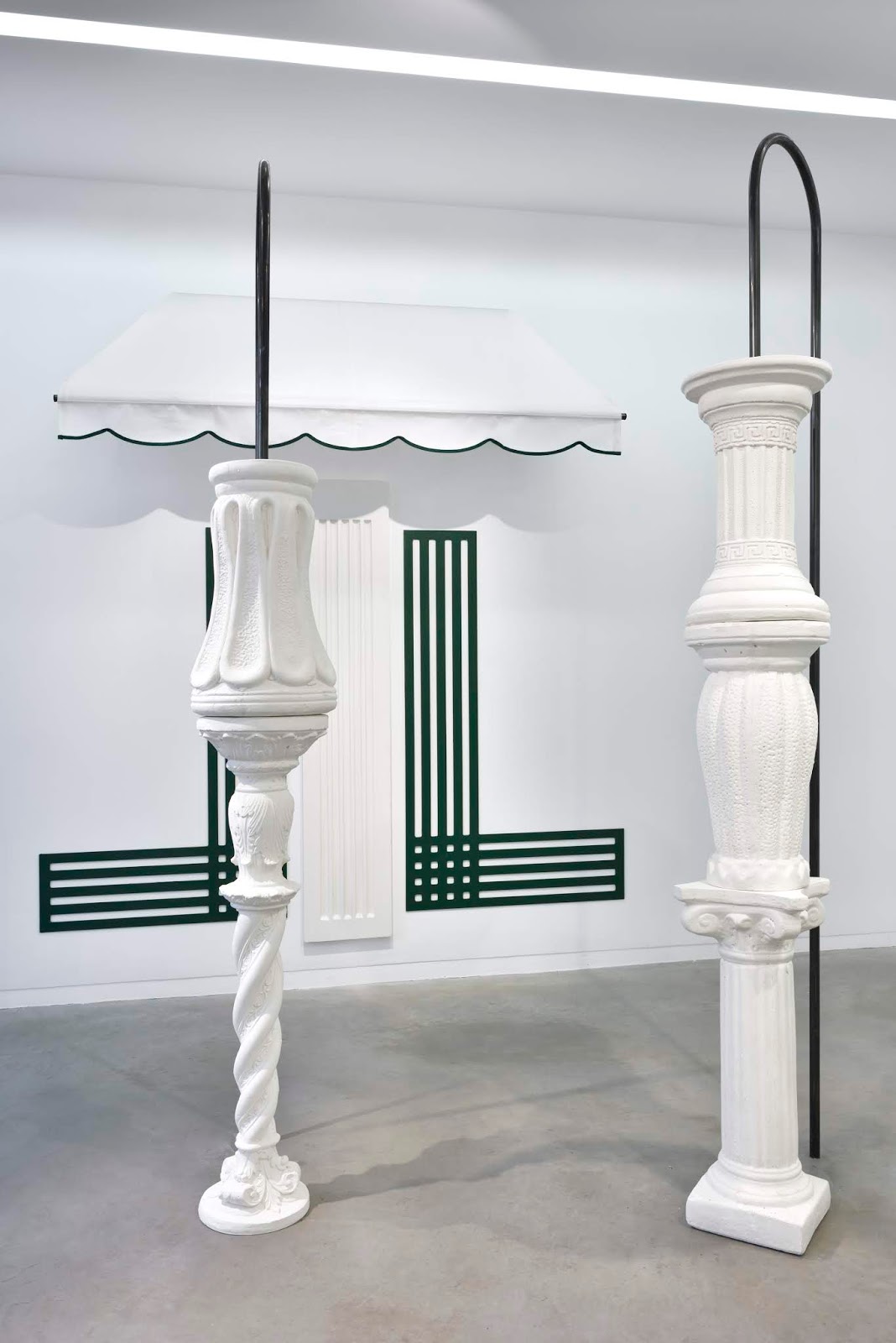 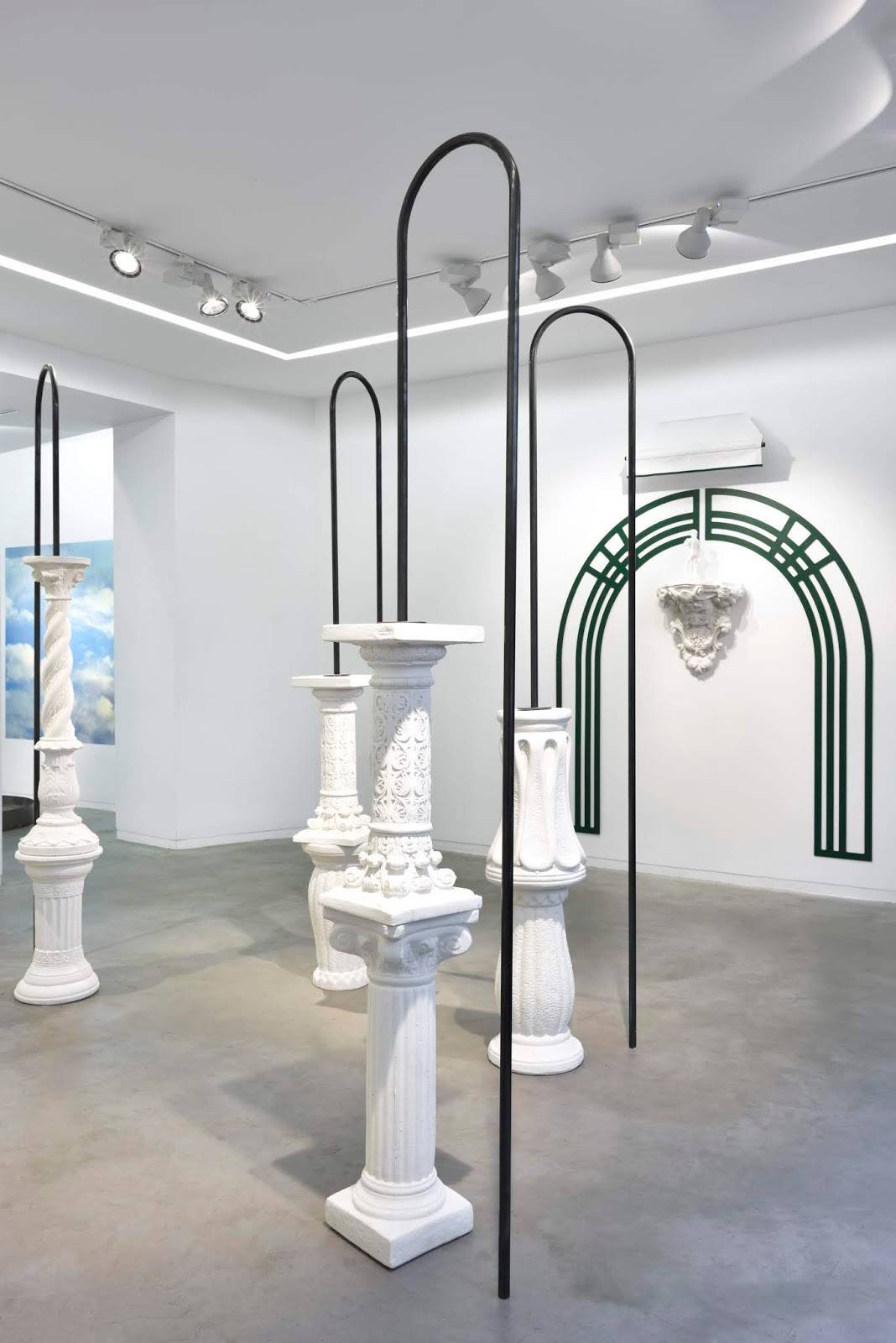 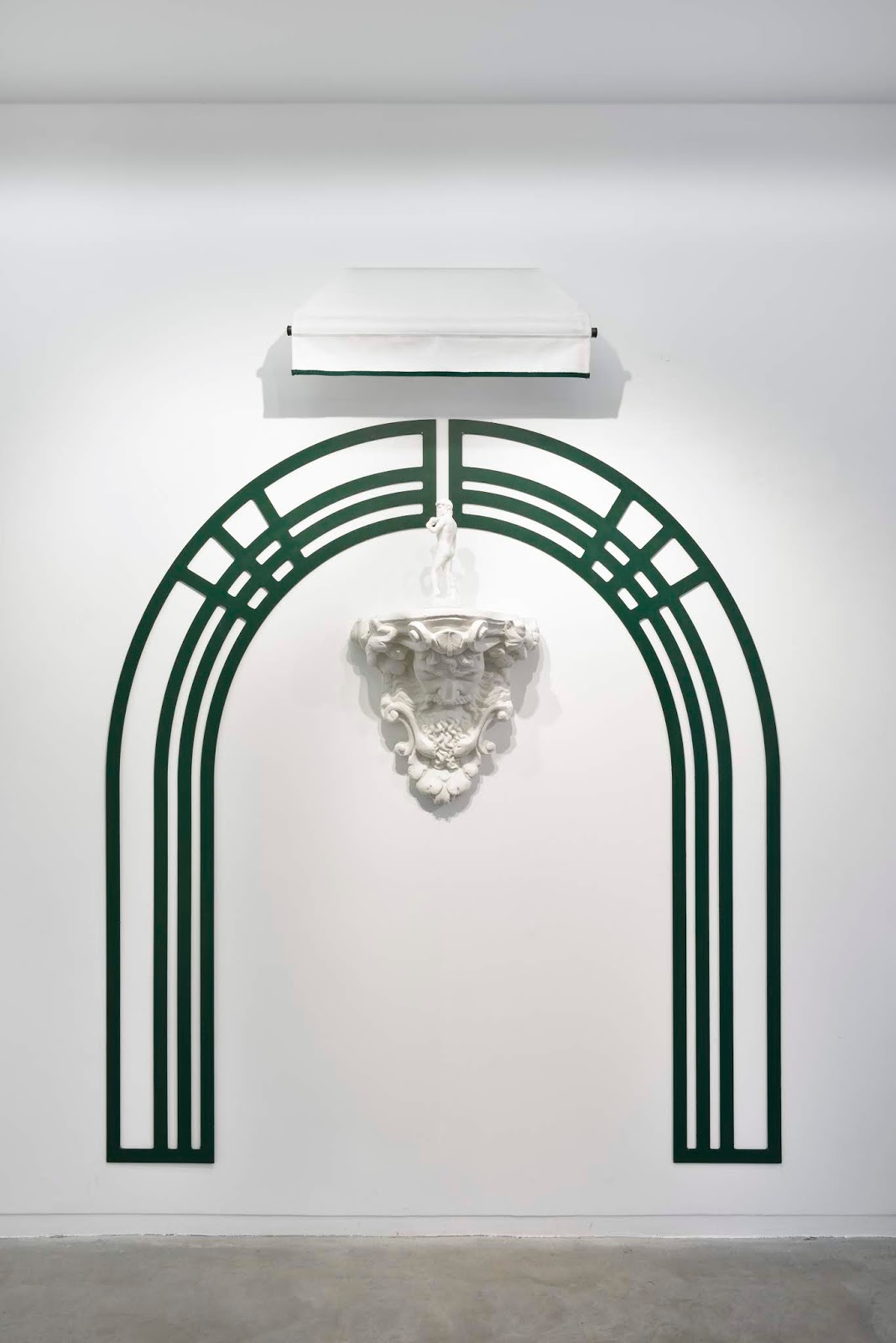 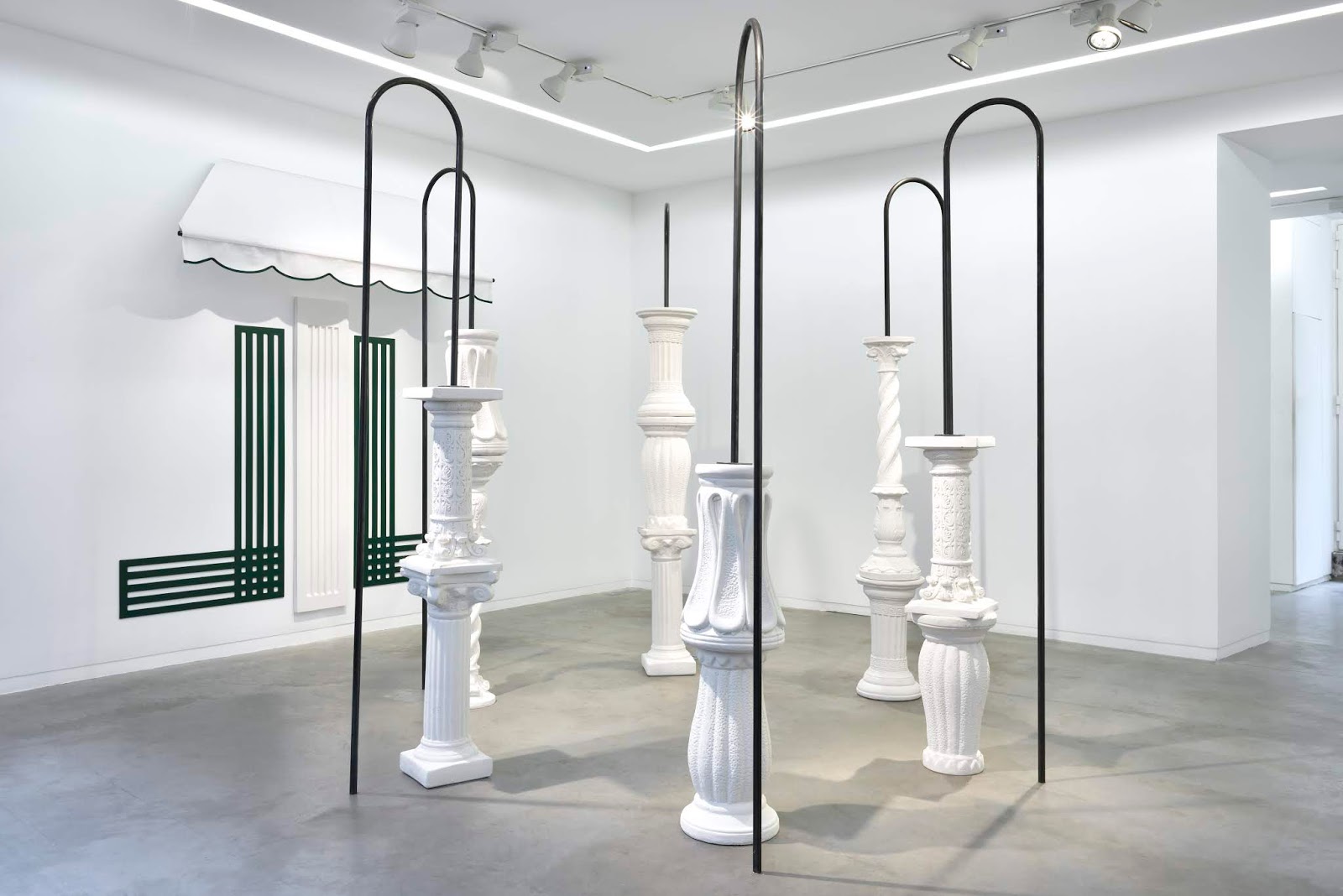 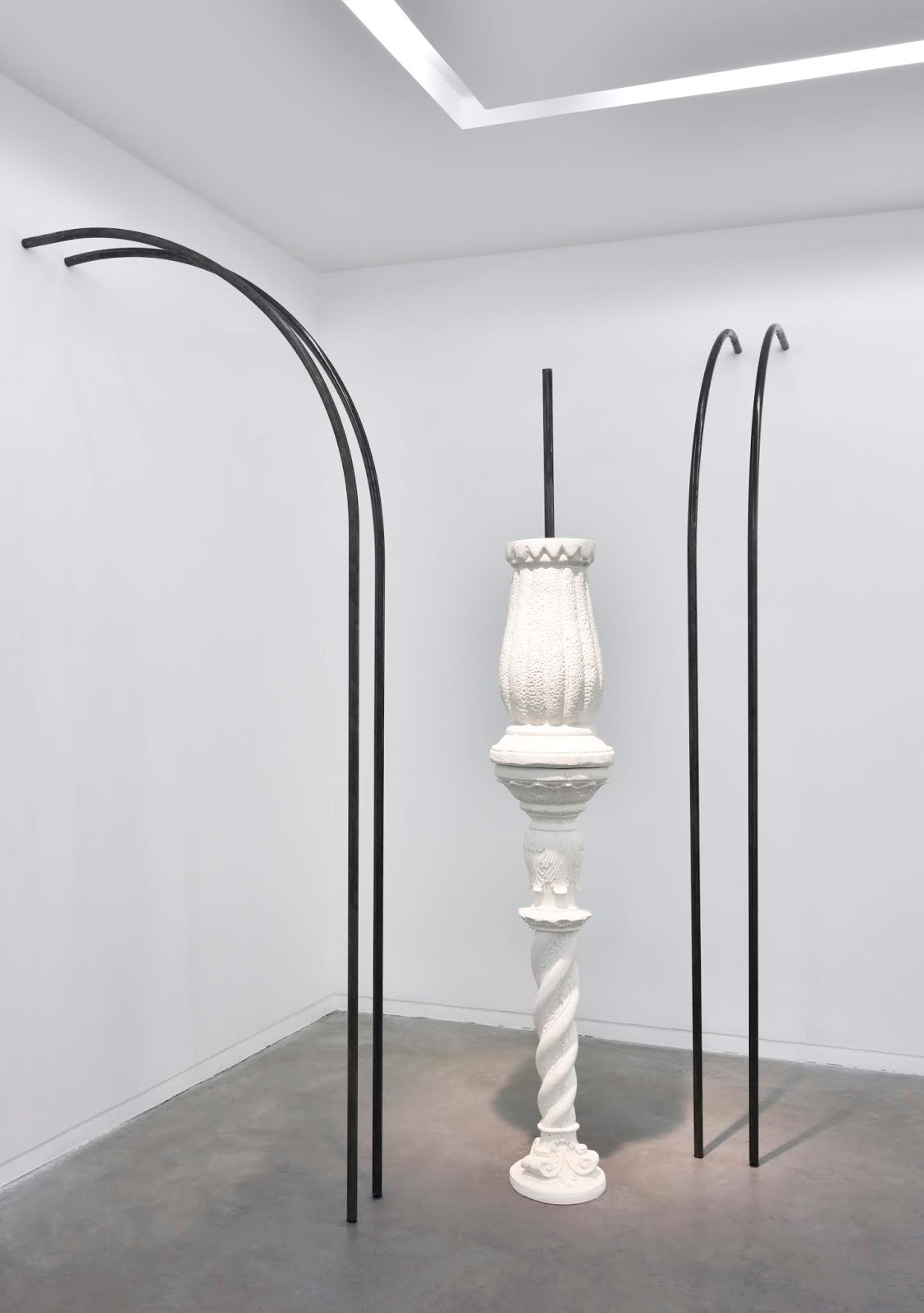 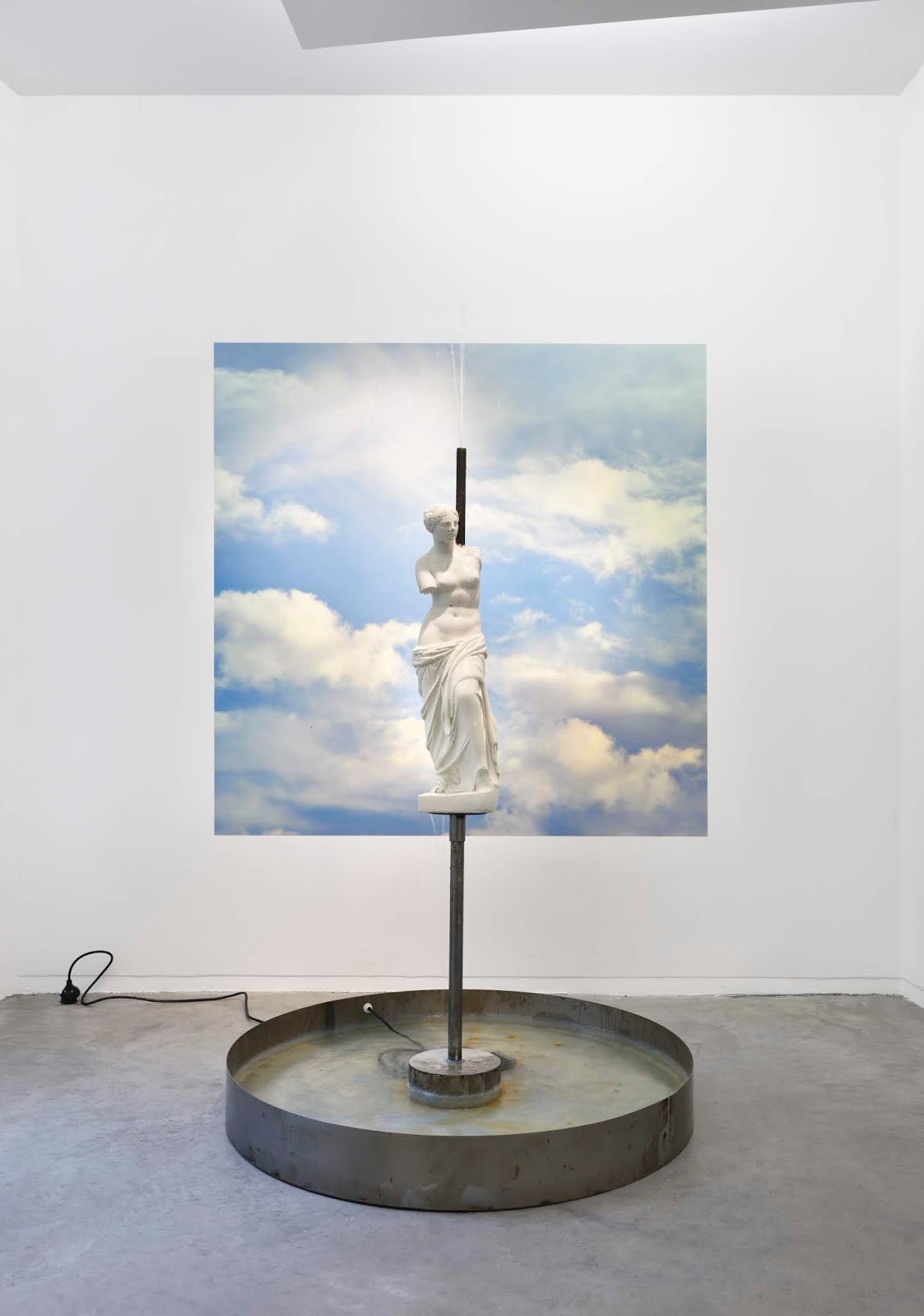 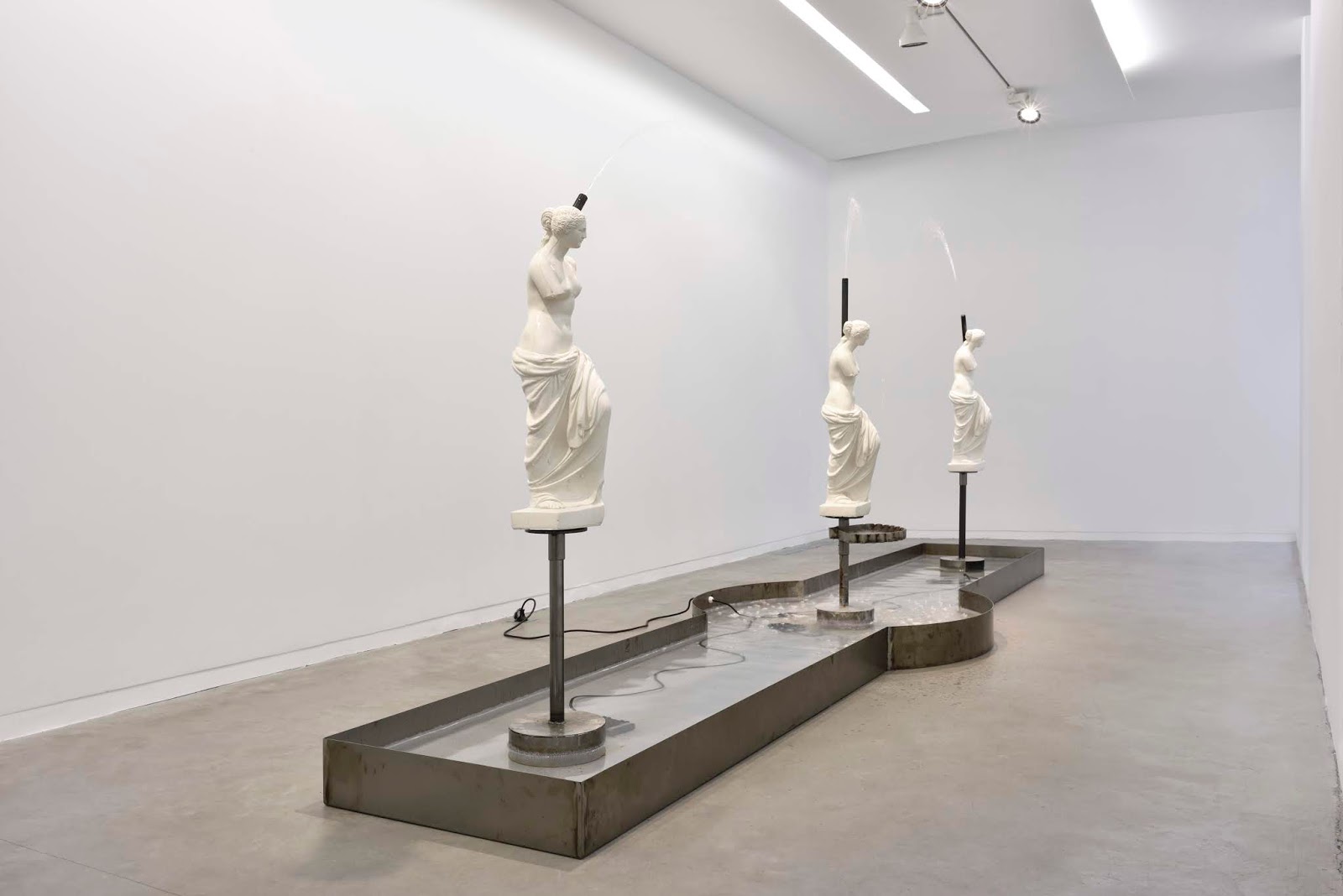 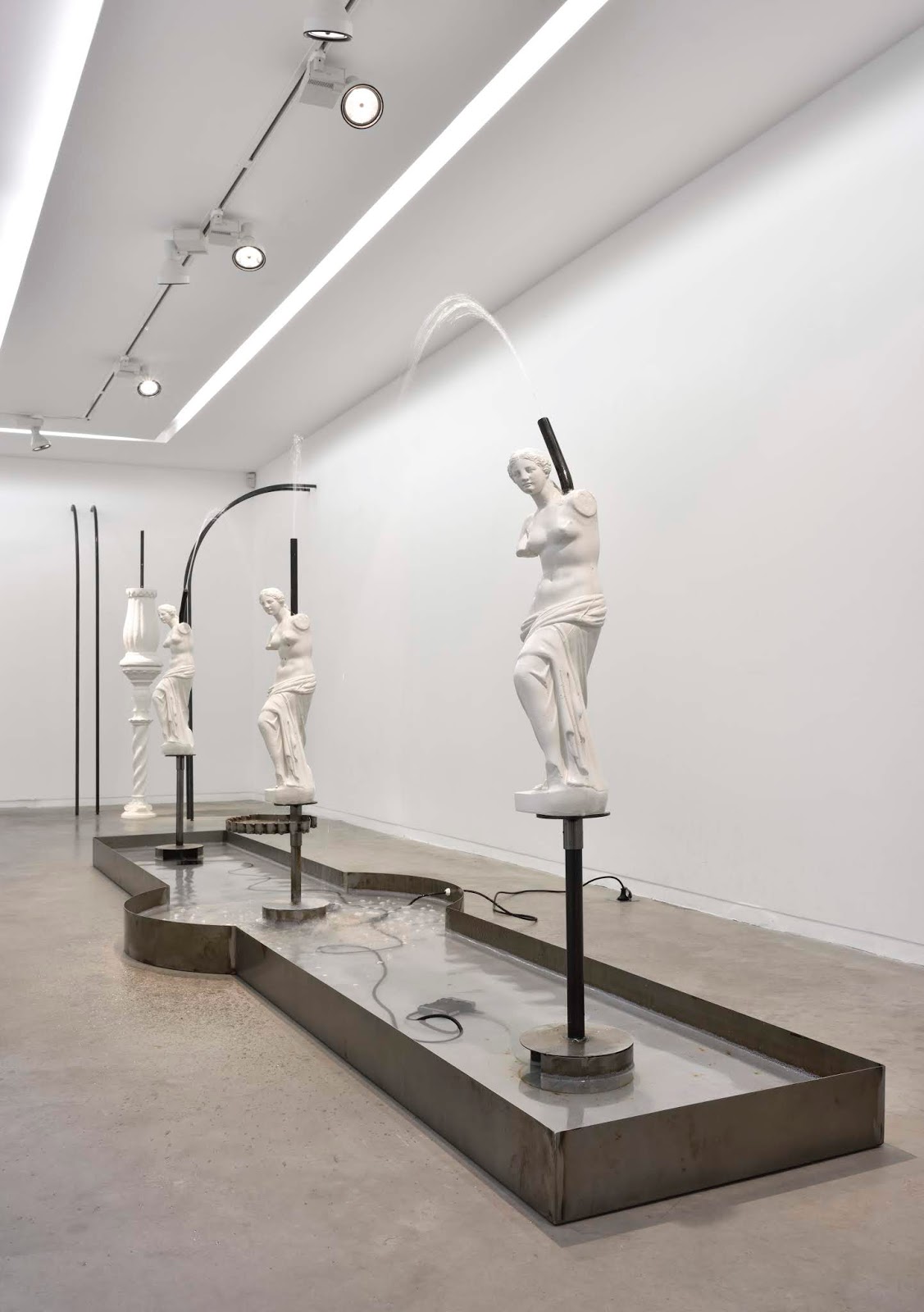 In an ideal world, garden gnomes would stand next to fountain-Venuses and laughing Buddhas, Botticelli and Da Vinci would be Warhol and Jeff Koons’s best friends, Garden Centres would be an artistic concept
in the same way as IKEA has become the champion of democratic design, displays would flirt with baroque and merchandise with rococo. Kitsch would no longer be the privilege of the lower middle-class created by industrial modernity nor would it be the privilege of contemporary societies’ vulgar consumers, but it would recover its transformative potential by elevating itself, again, just like a major element of the “grammar” of builders, from Ancient history to the Renaissance, and from Egyptian pharaohs to globalised pop culture.

Cyril Zarcone’s second personal exhibition at the Galerie Eric Mouchet is a syncretic fable which takes us to the scene of a crime that has probably never occurred. Côté jardin organises the backstage area of a surrealistic play where the characters are impoverished pretences made of stucco and plaster, they are garden ornaments taking shape in a White Cube case. The whole story turns out to be even more delicate when finding out that the crime takes place in the den of the disciple of Le Corbusier ...

Cyril Zarcone combines art history with more immediate references to our popular accession to it. Before becoming Michelangelo’s most famous work, David was a garden statue, the son of the guardian mascaron and Venus’s lover. Staying true to his self-appointment as a “superior DIYer”, the artist has pushed the aesthetics of building sites and construction kits to a fever pitch, thereby reversing the prevalence of construction to the advantage of decoration. Materials are reduced to facsimiles and shapes no longer follow functions; columns have lost their capital and mated with fountain feet according to new alliances of styles, periods and geographies. The gazebo, trellises and awnings dress the space in an irony that verges on supermarket luxury, if not snobbery. Shouted down by some and celebrated by others, kitsch has spanned history, and with it, the mark of bad taste: it is its barometer for each era.

“Less is more”, they said. The ode to functionalism that animated the male and ascetic values of modern
times has never managed to eradicate kitsch, a genuine economic parasite, for the benefit of pure, honest
and true shapes, guaranteeing that beauty inevitably stems from utility. Ornaments then became the result of a rationalisation of production, where prefabrication, mould and copy would rhyme with the optimisation and standardisation of values. IKEA ensured all that, praising “useful beauty”, thereby following Greenberg, the Bauhaus or Le Corbusier. However, furniture reduced to its props, with no decoration, had become the ornamentation of the house. On the scale of good taste, the decorative system had been moving towards a new form of academism. All of a sudden, it was becoming a vicious circle and the persecutor was turning into the victim.

Ornamentation is neither a crime, nor is it the reflection of a degenerated society; it is, to all humans and living things in general, the most essential form of aesthetic artifice. By recreating the conditions for pastiche and by combining what falls under “true art” and decorative arts, Cyril Zarcone introduces the pomposity that defines the relativity of Art and the immortality of kitsch. The staging, the eroticism of the shapes and the mixture of genres are a provocation to the judgement of taste, of which criticism had become the fervent guardian. By levelling high and low culture, reproducibility and authenticity through the intervention of ornamentation, Zarcone mobilises the subtle art of pleasing and displeasing with genuine enjoyment.