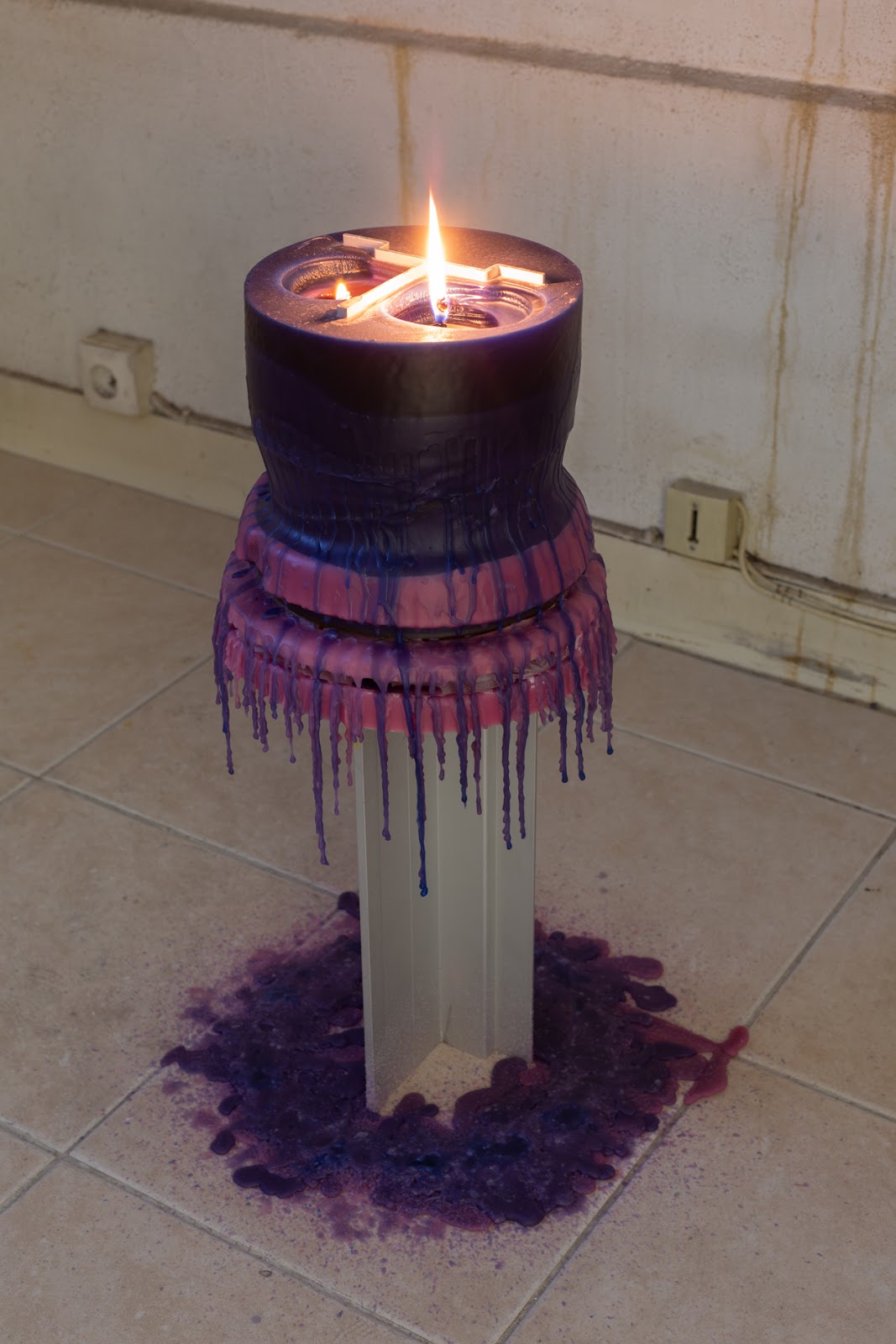 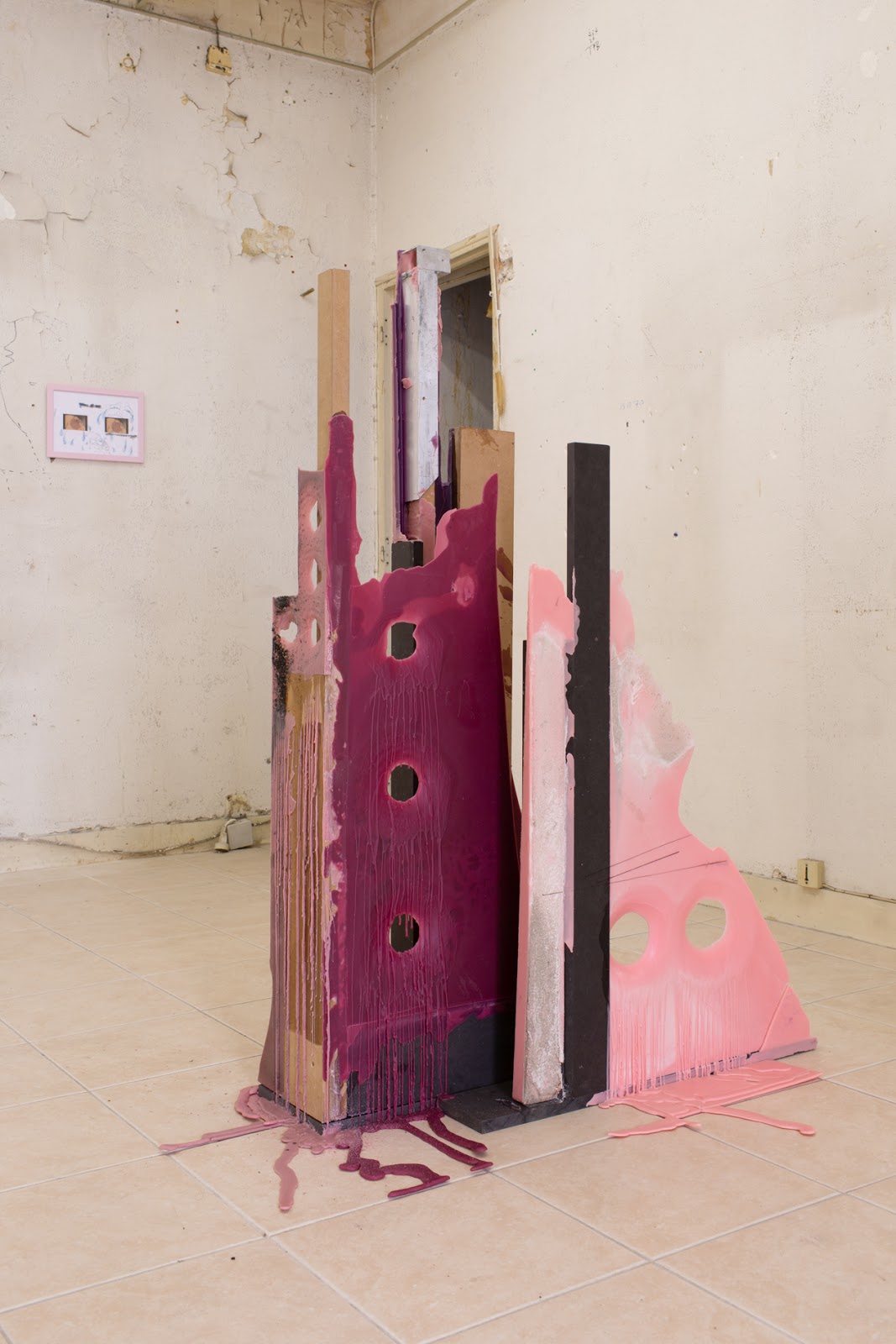 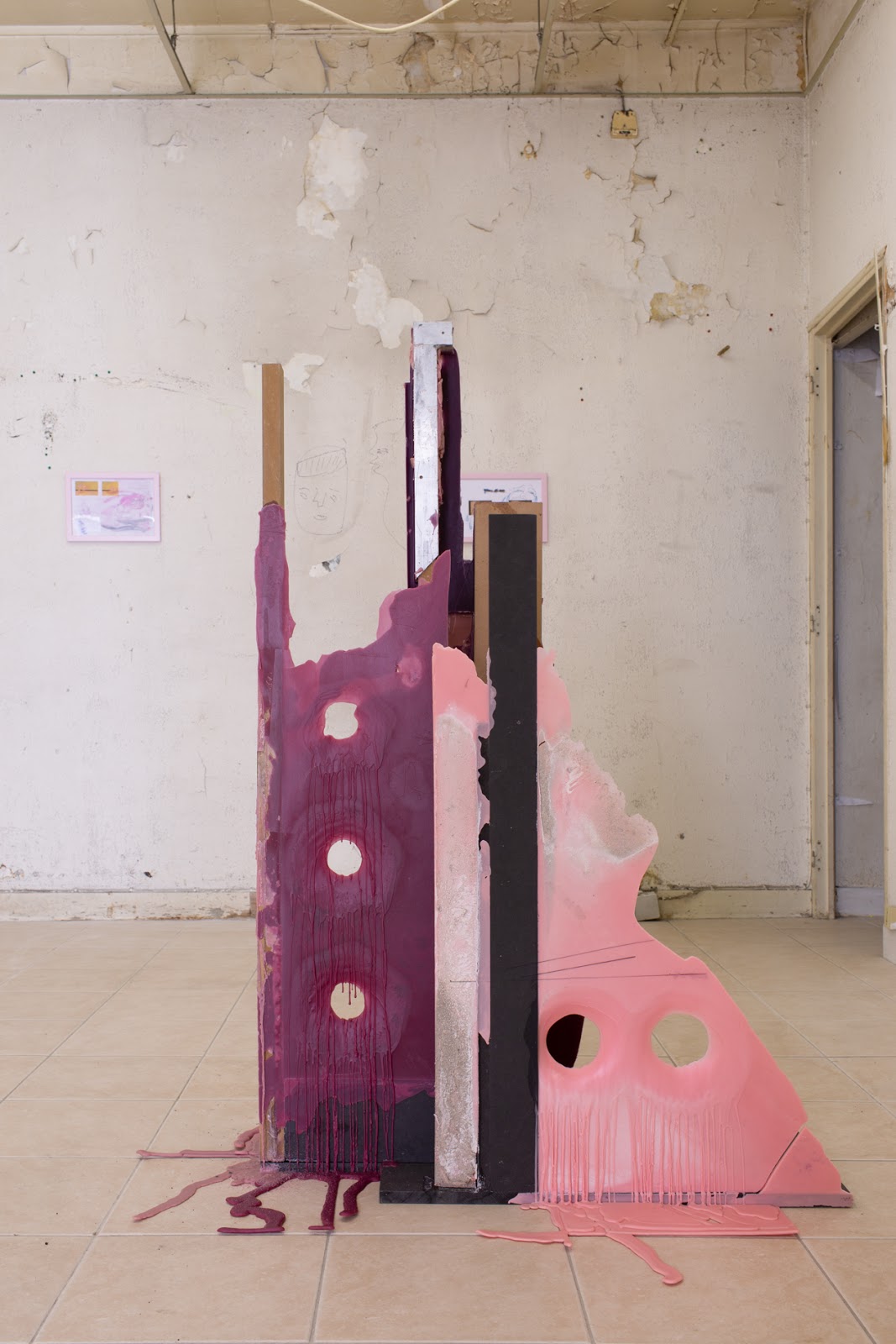 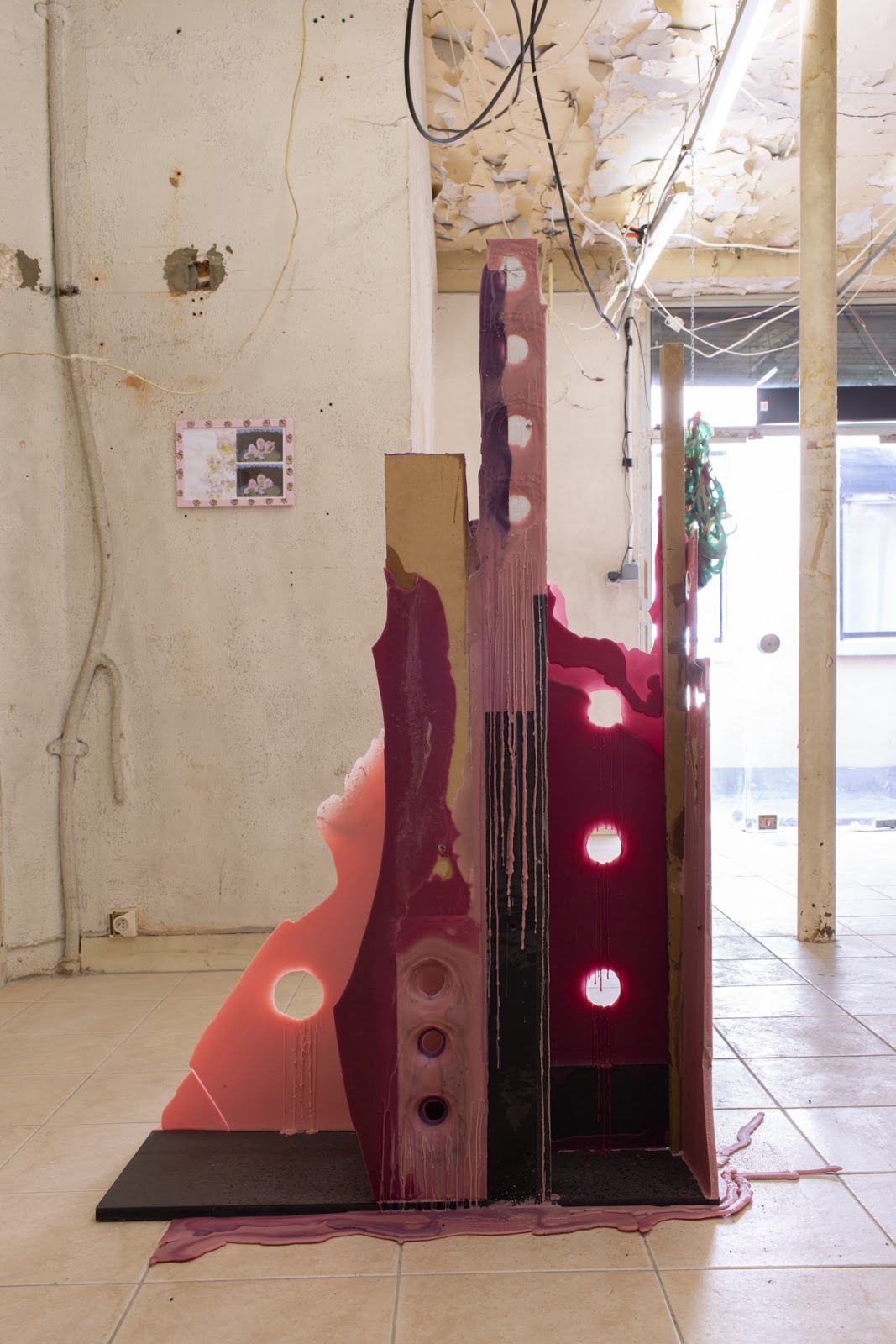 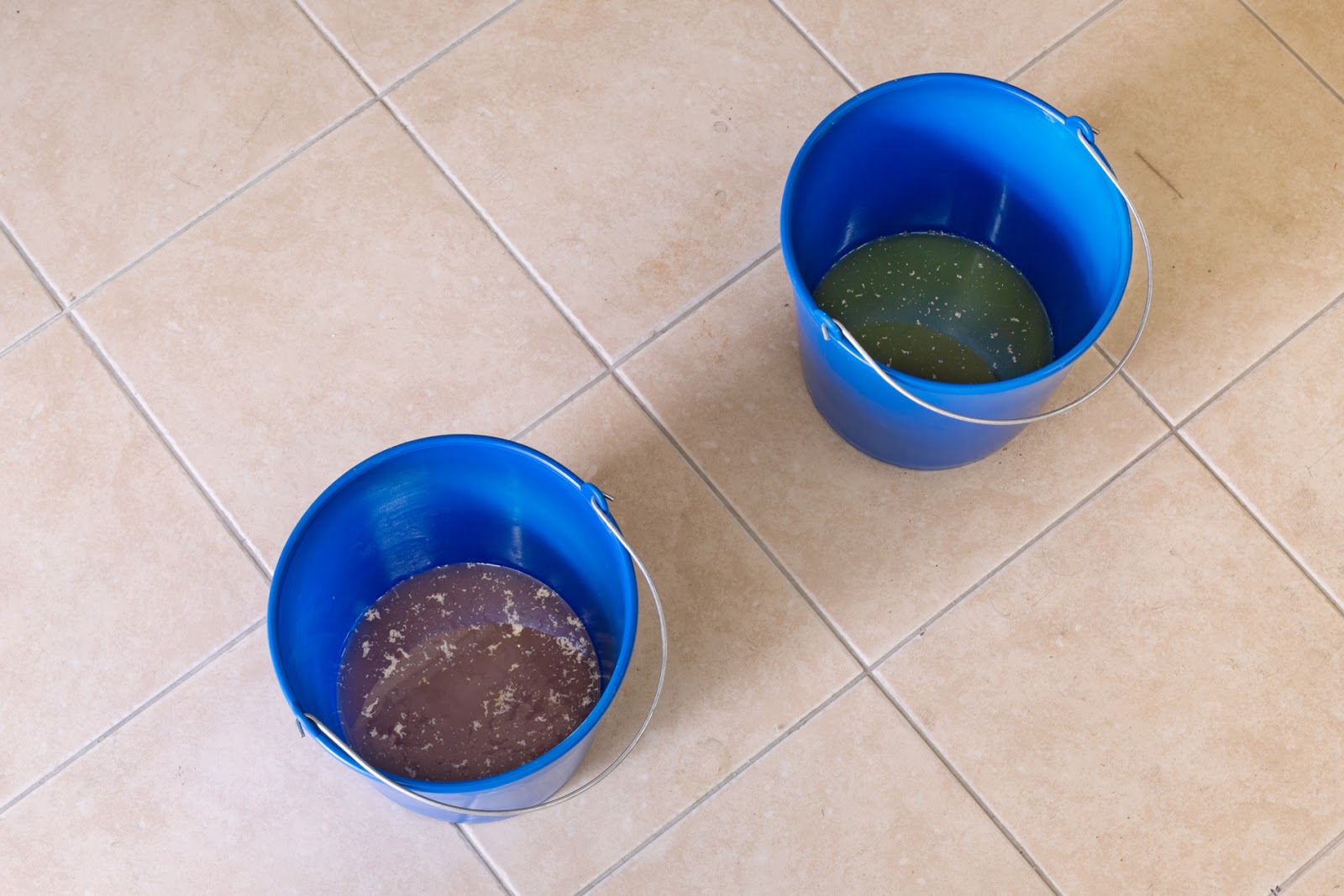 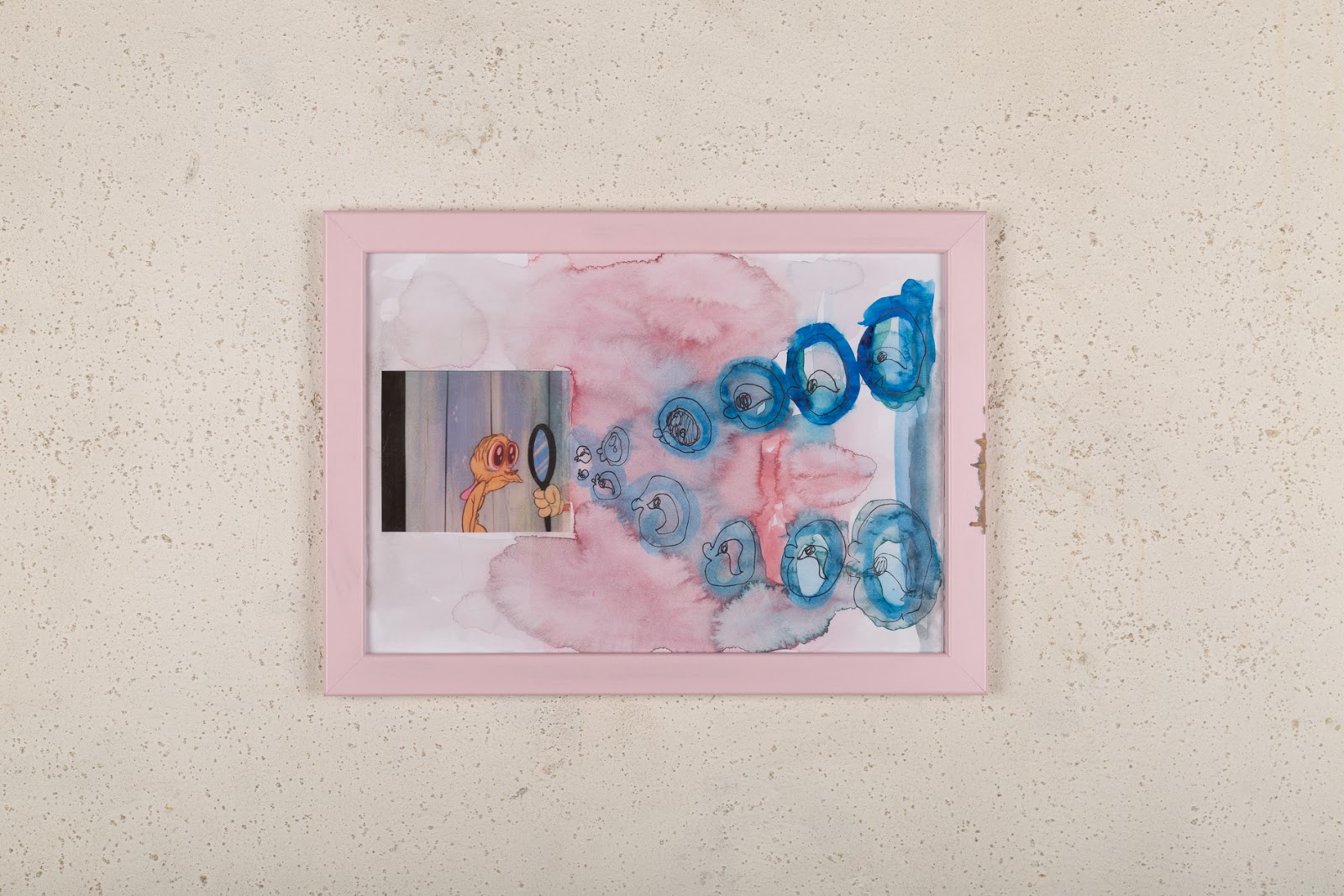 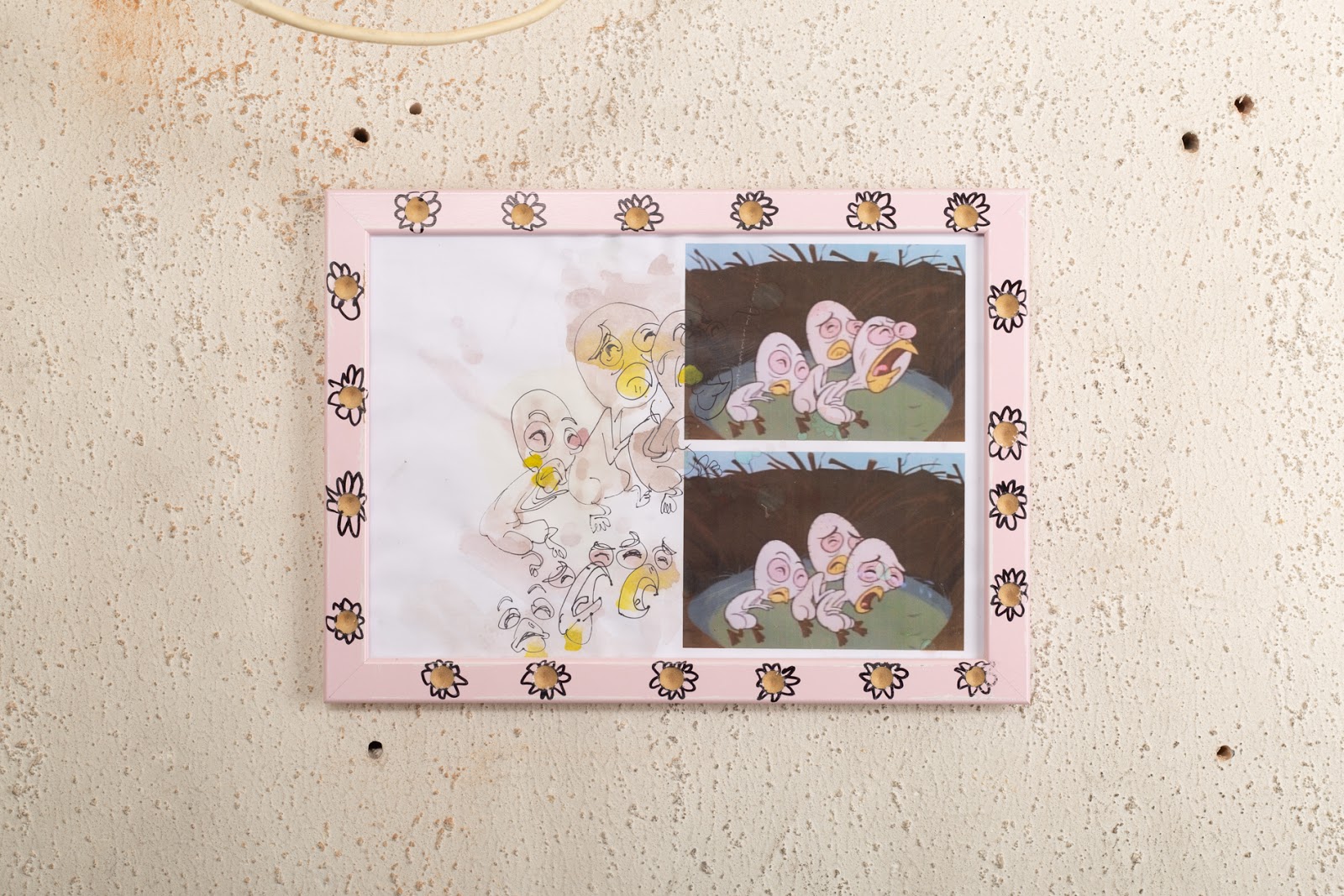 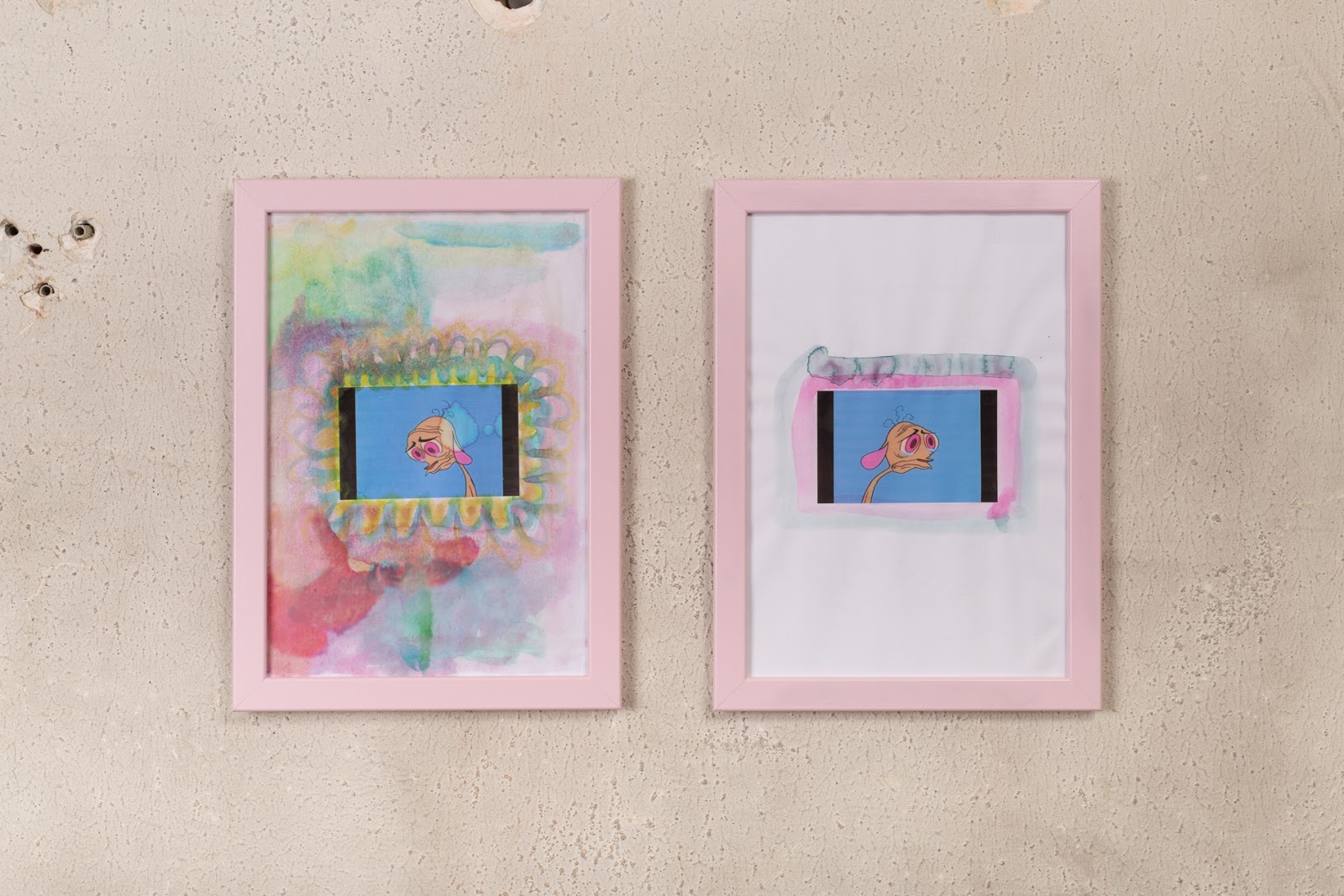 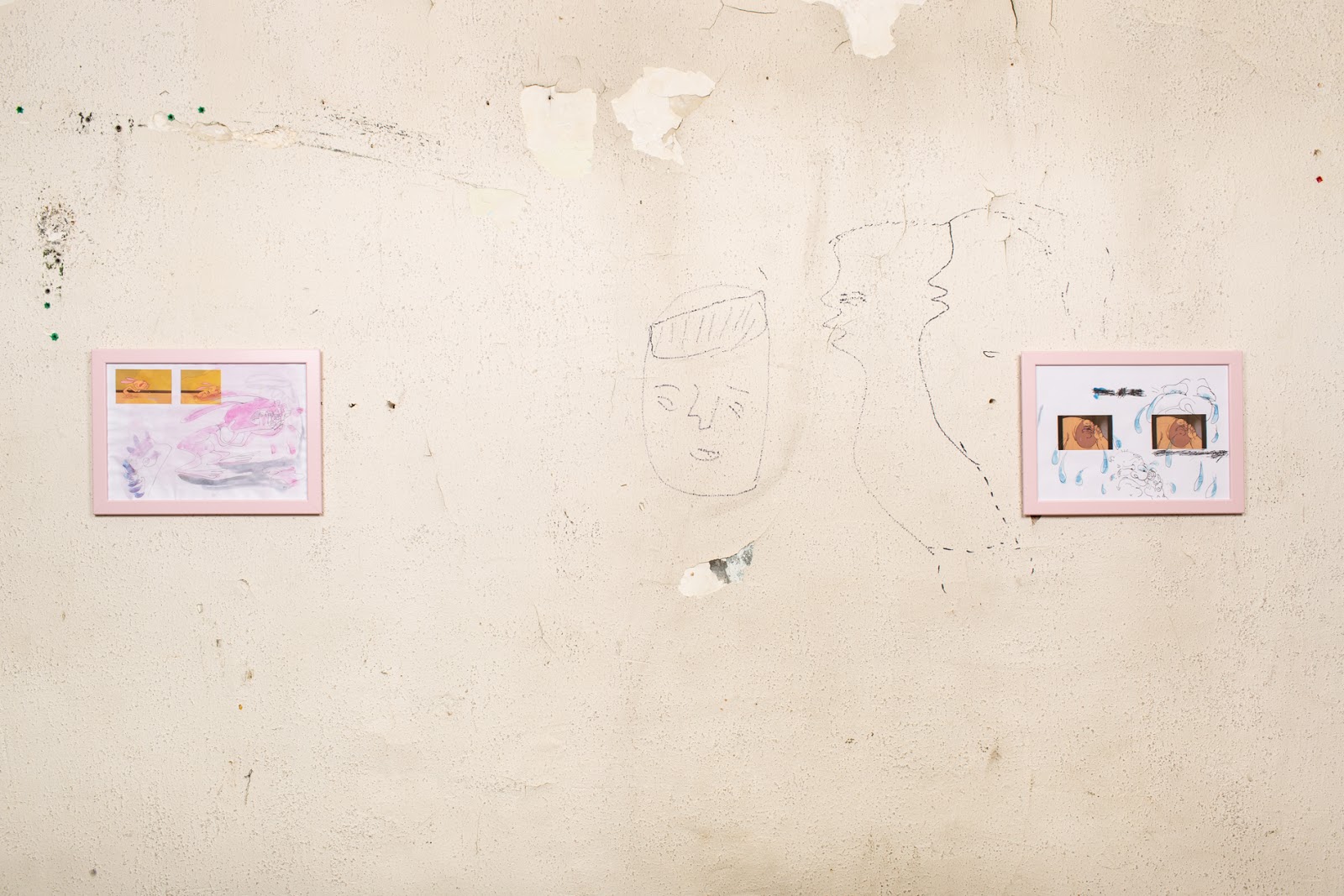 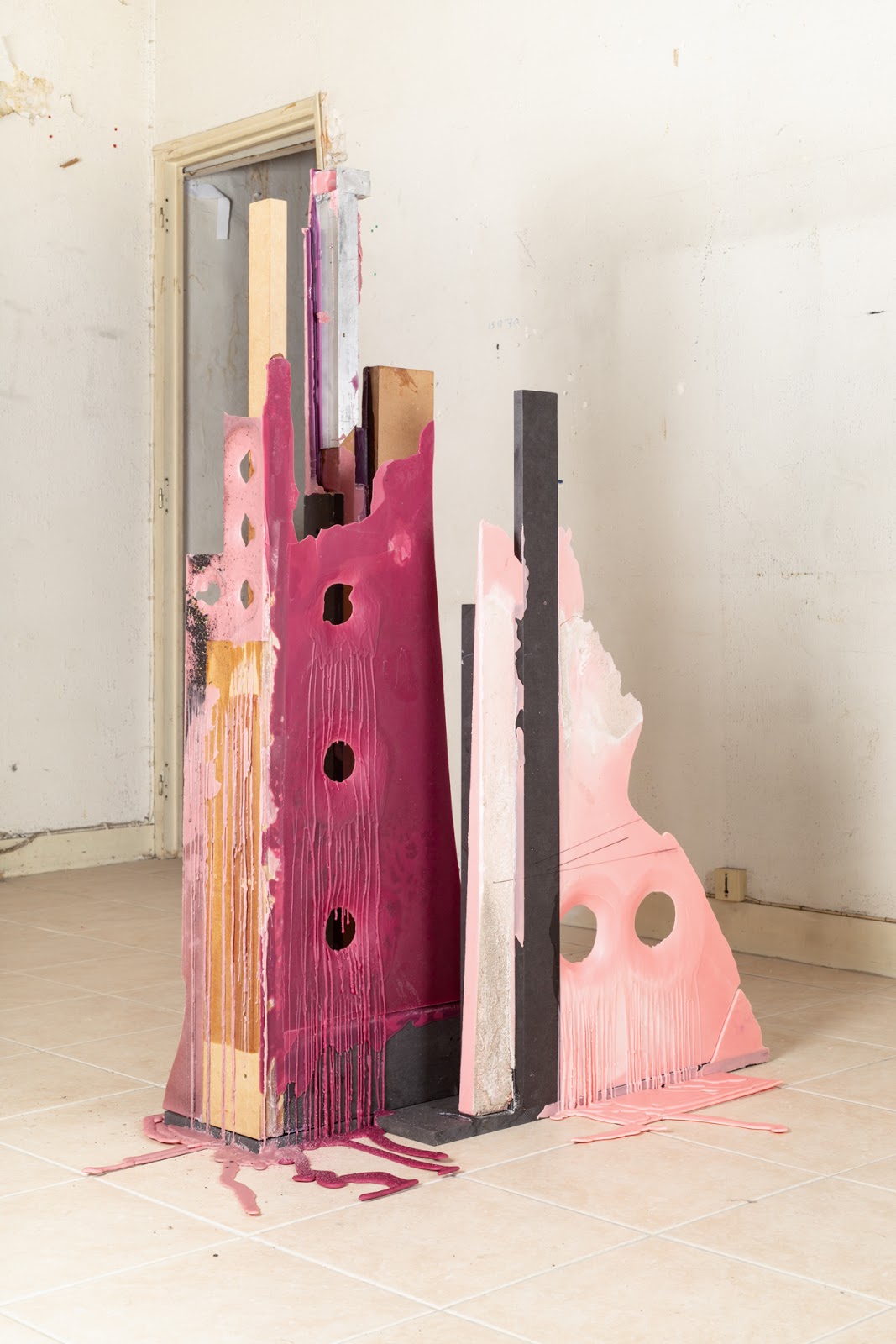 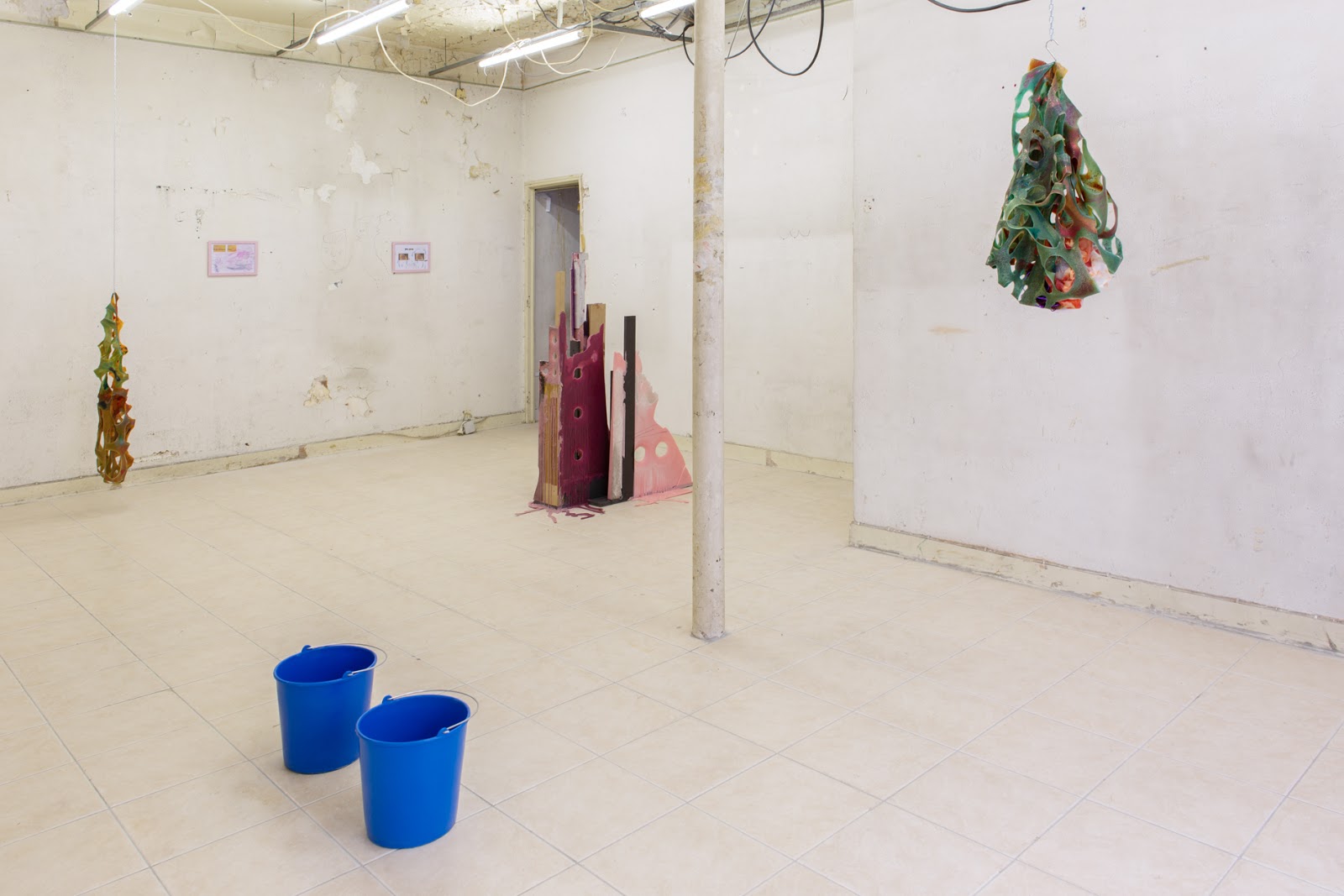 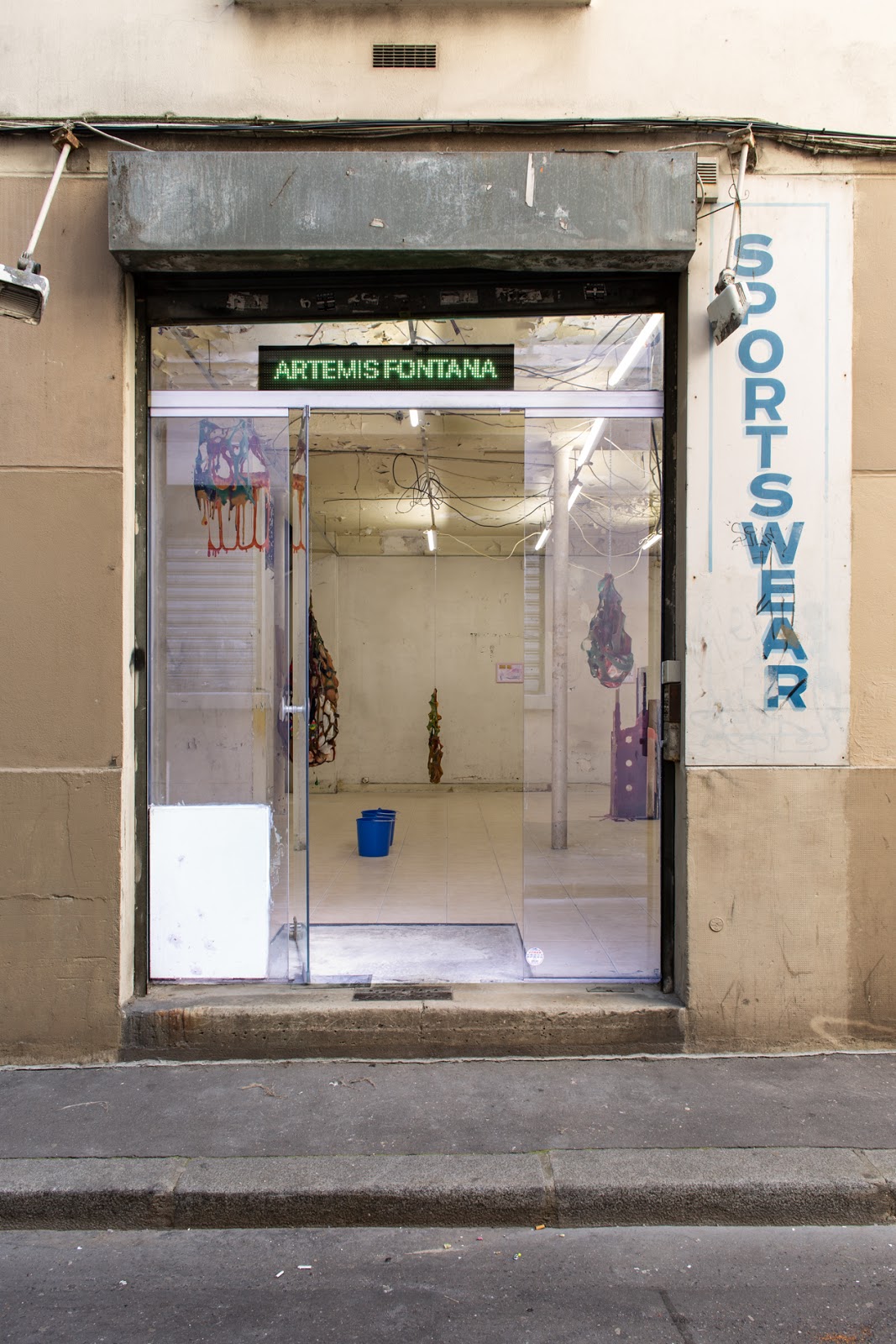 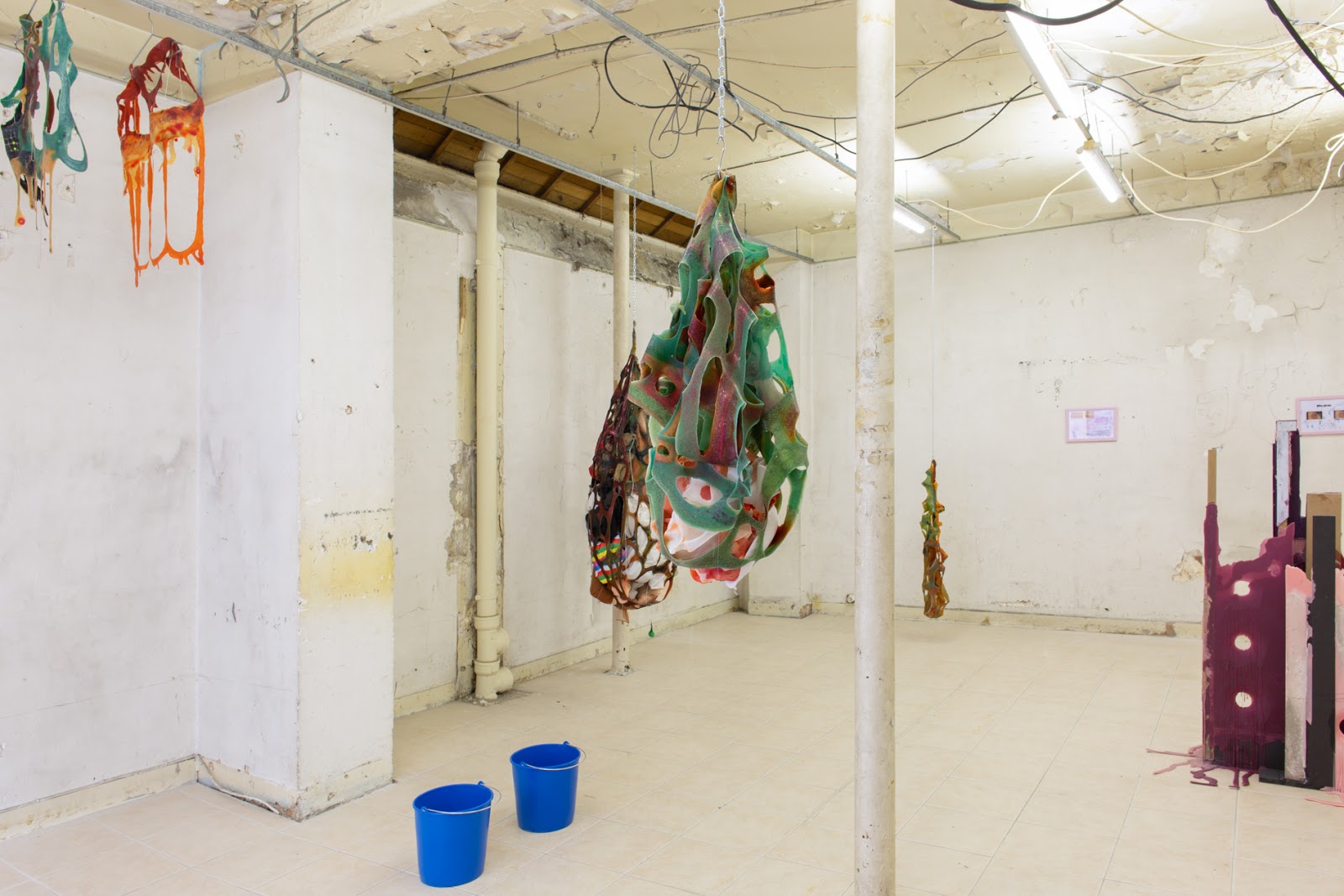 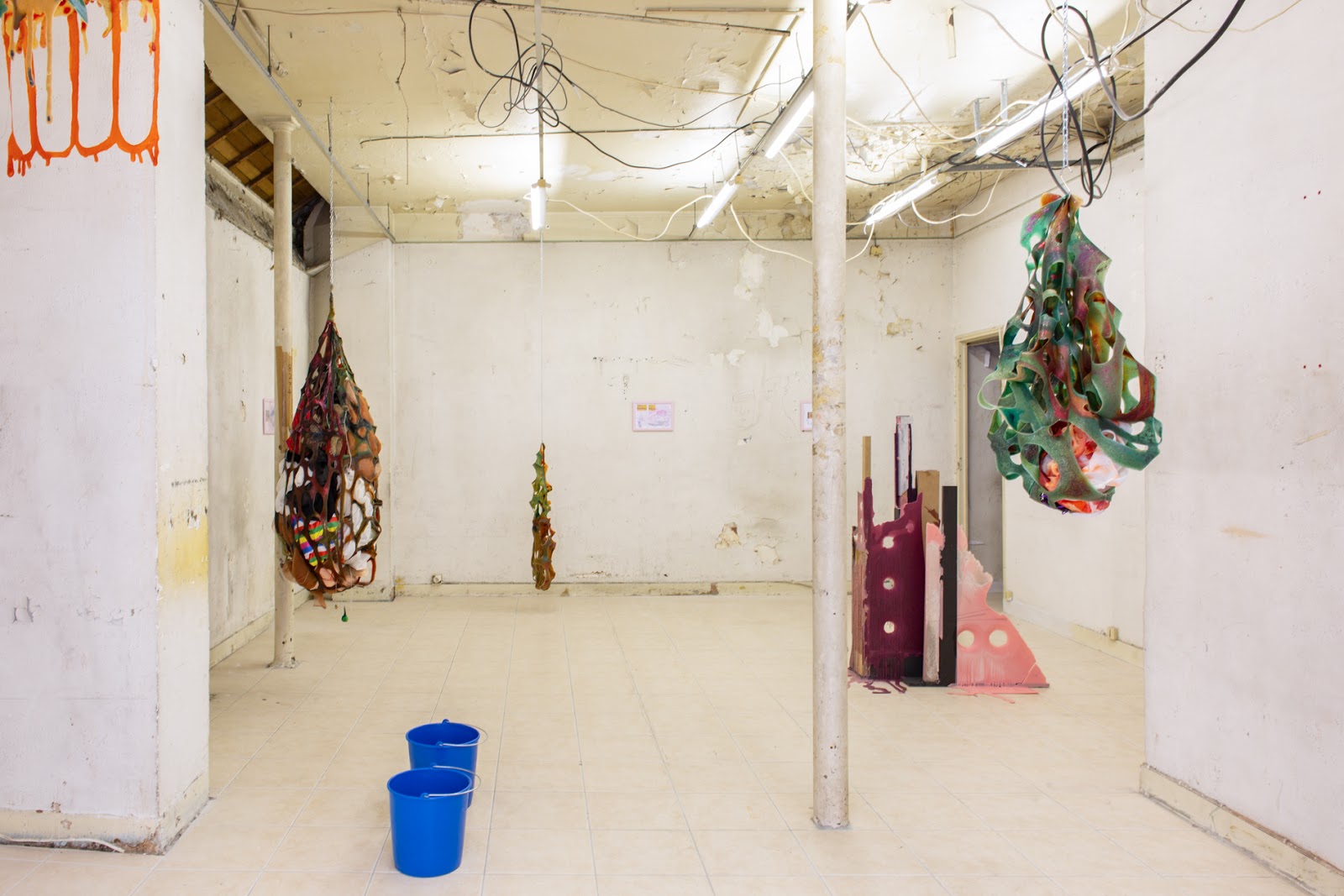 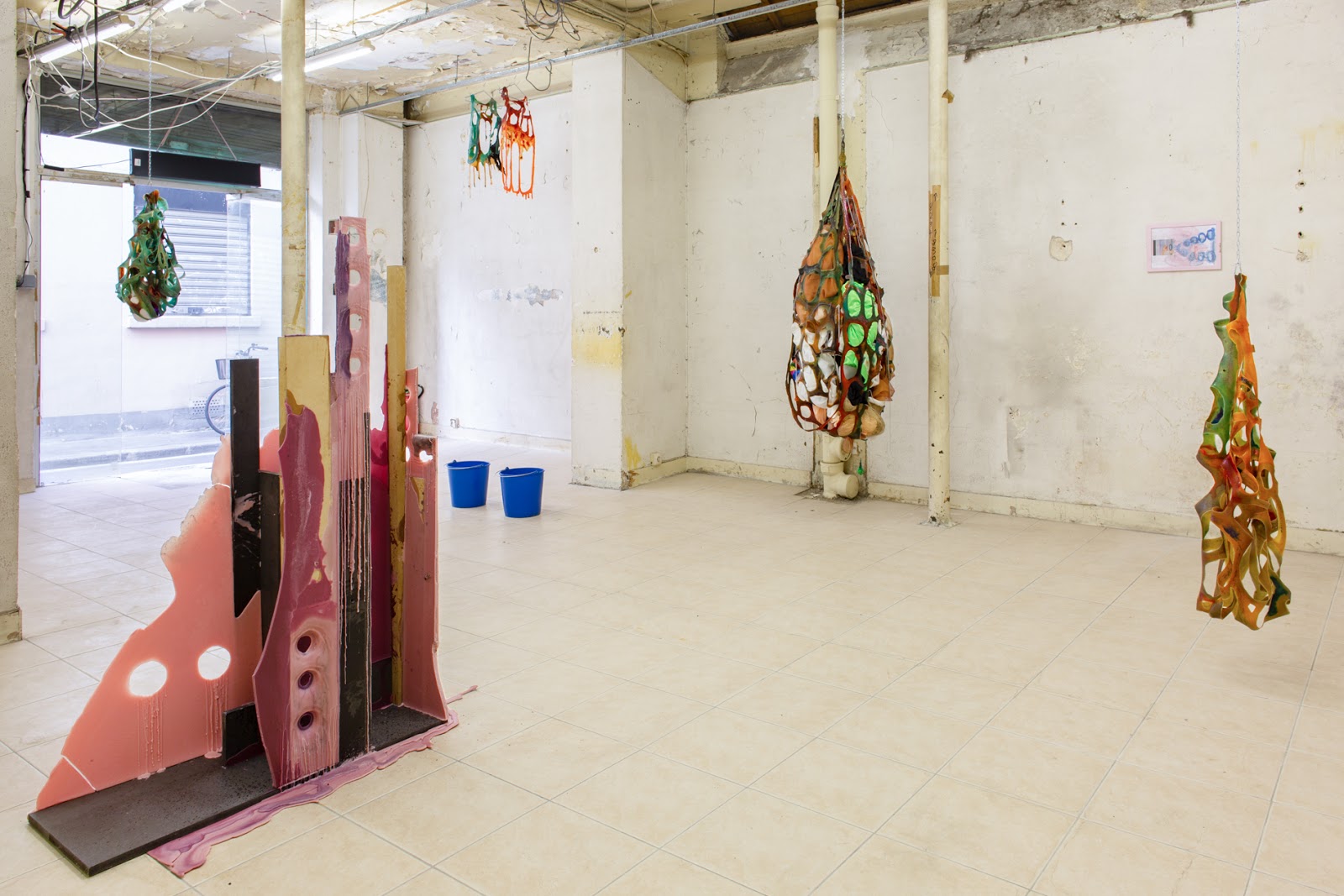 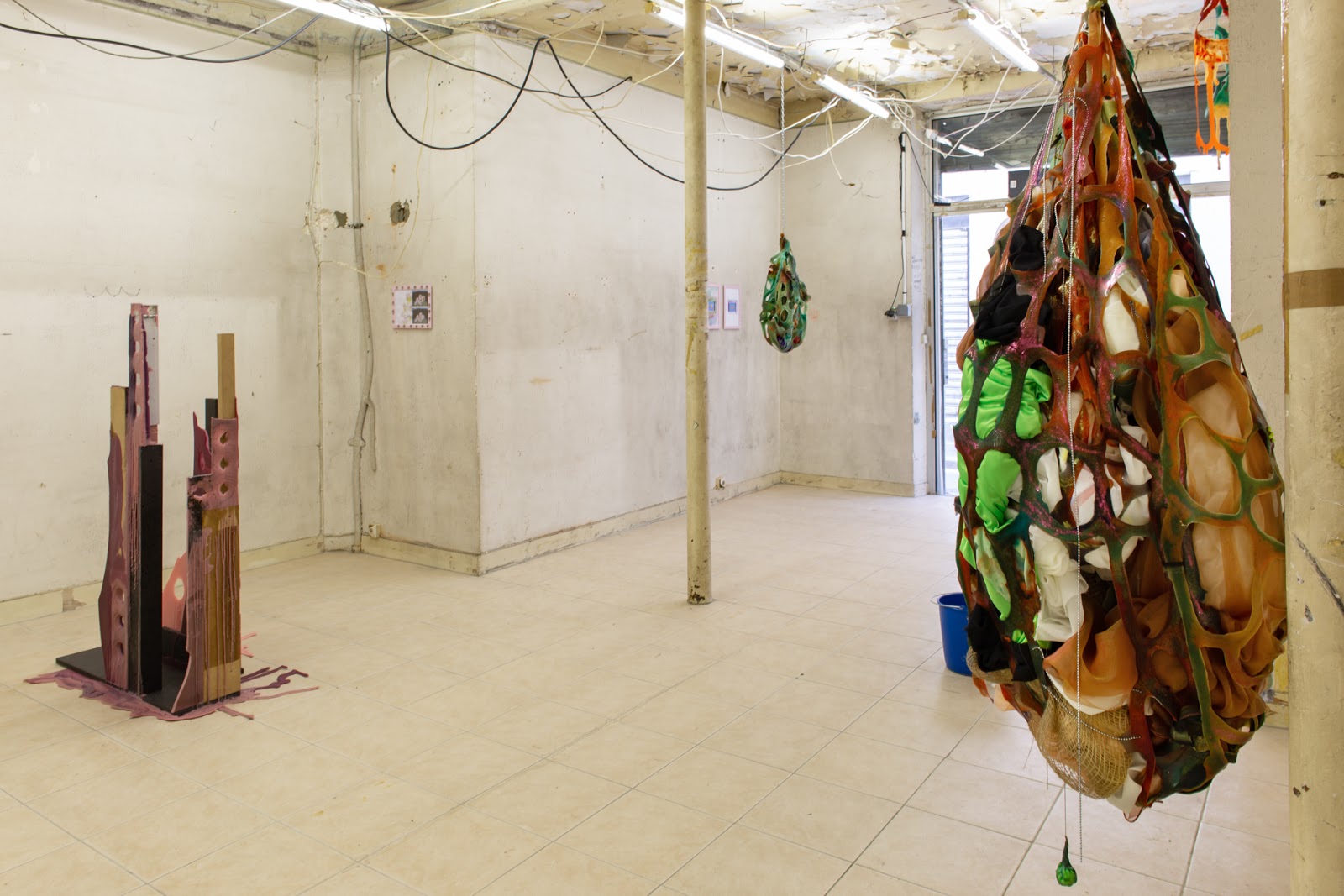 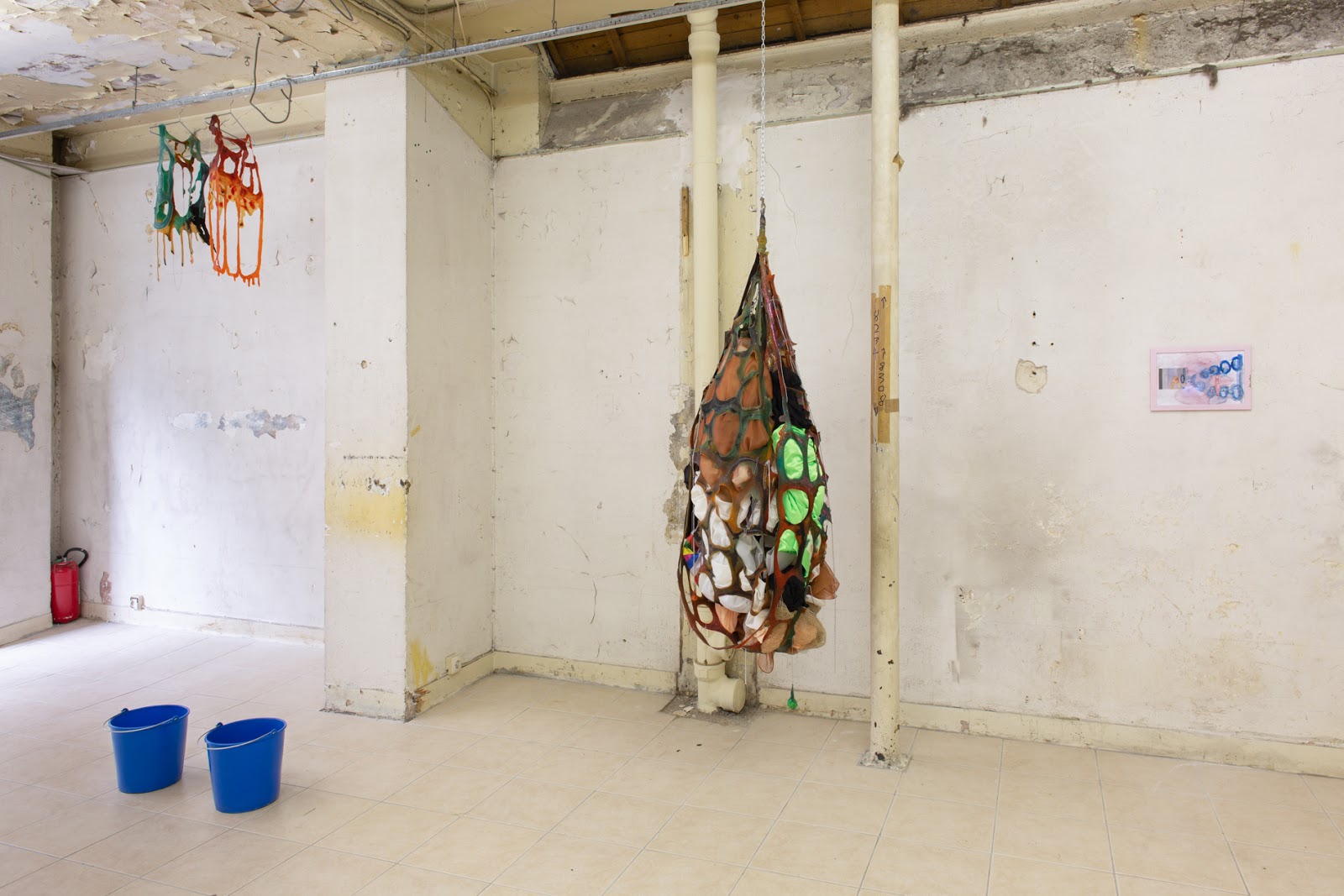 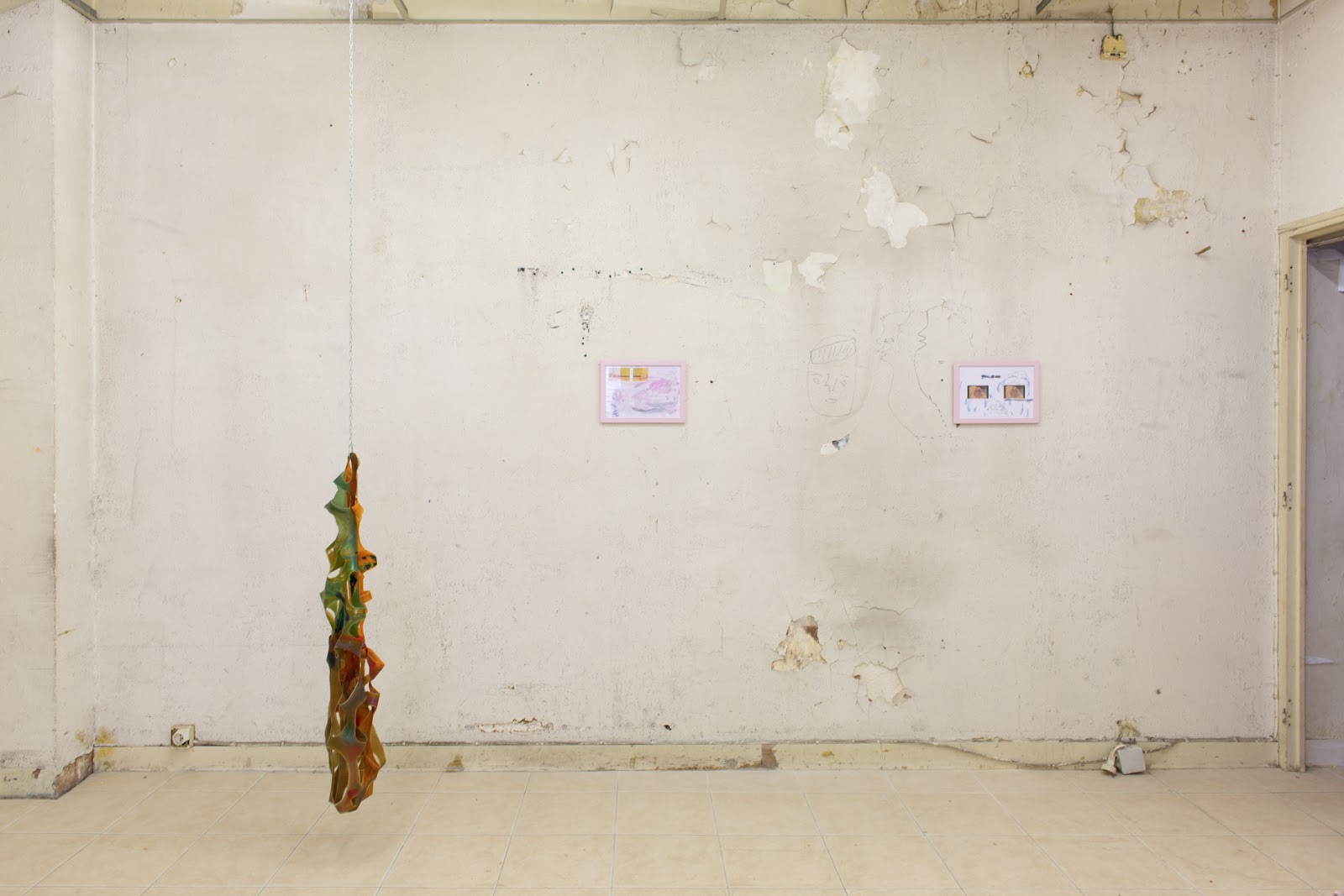 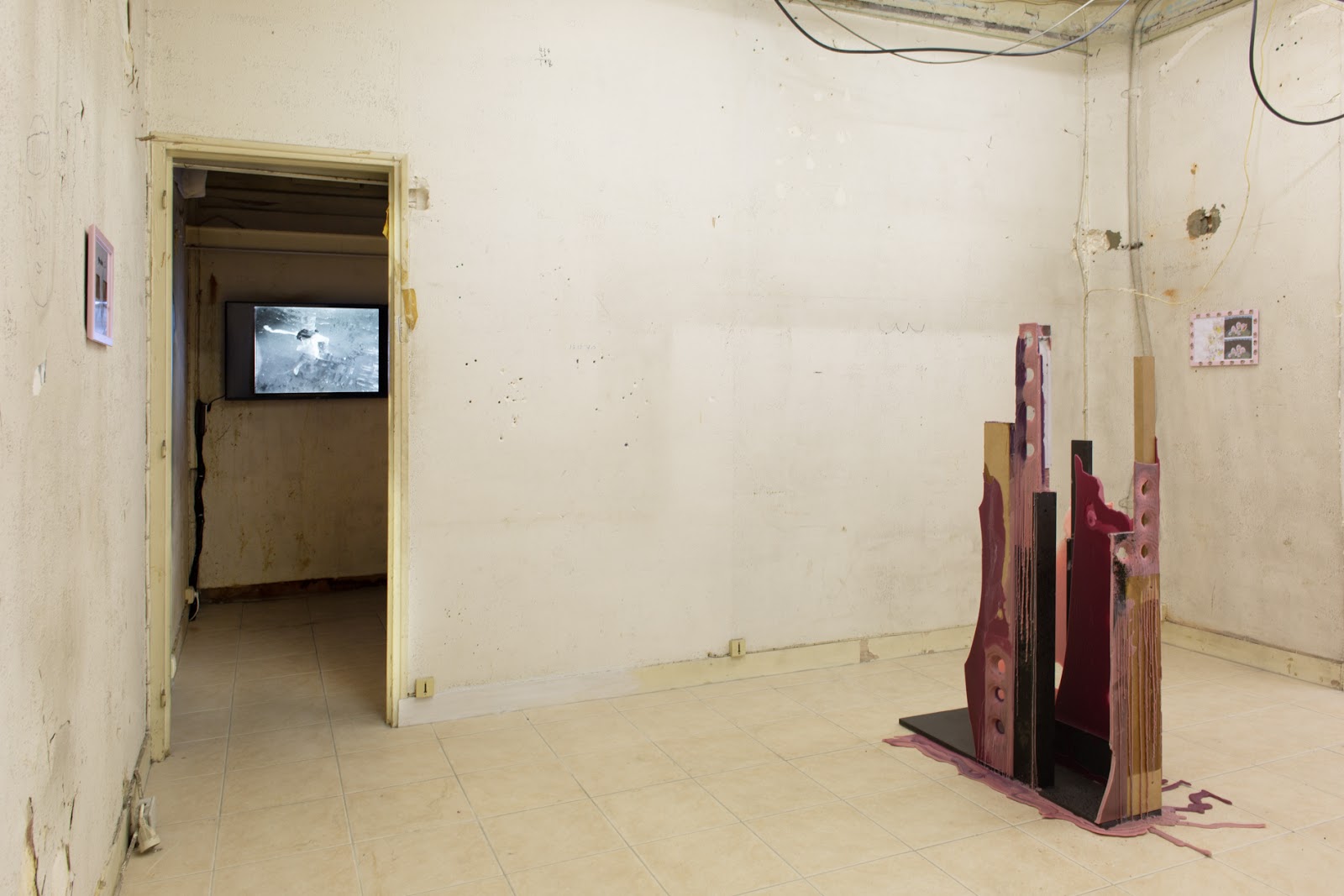 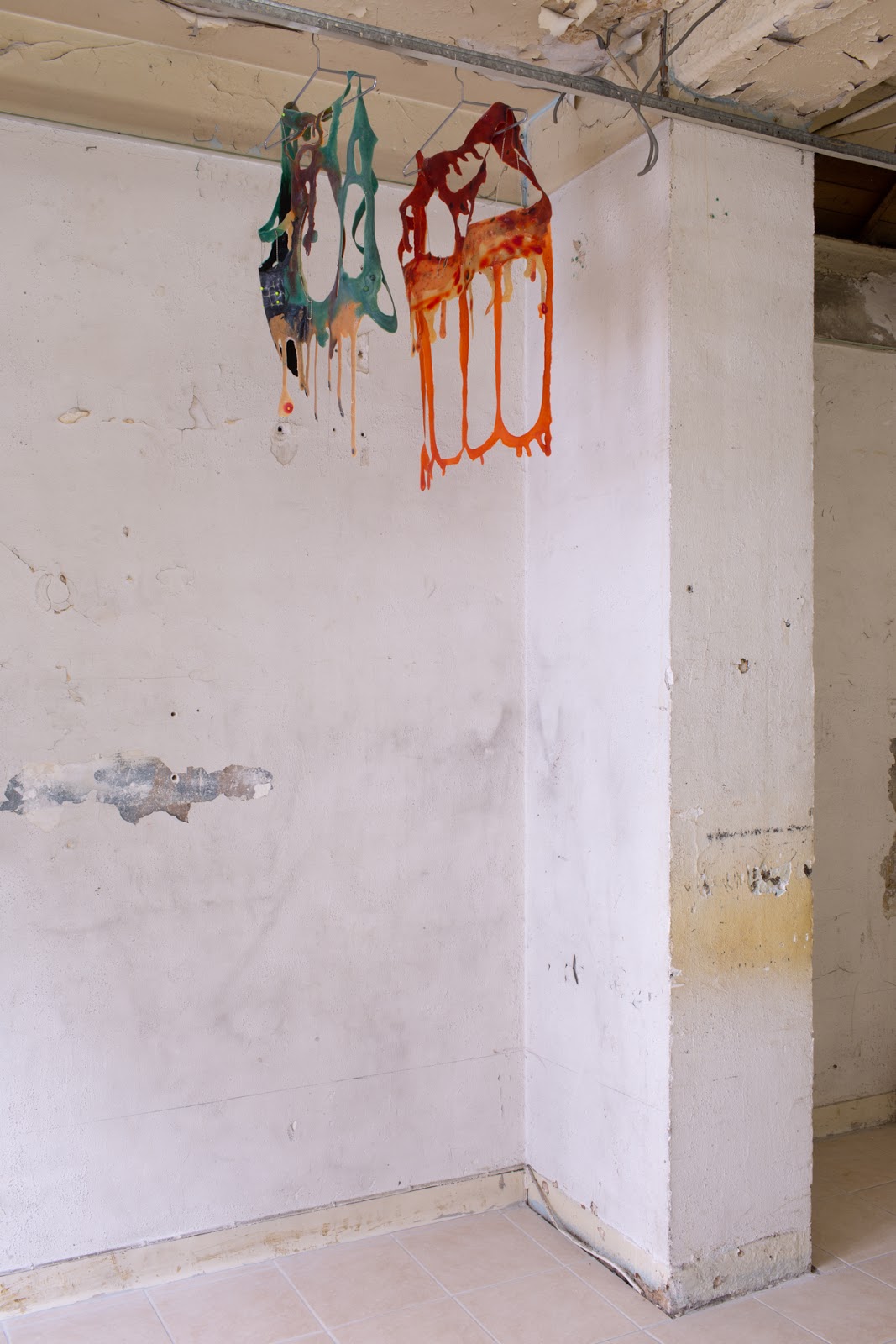 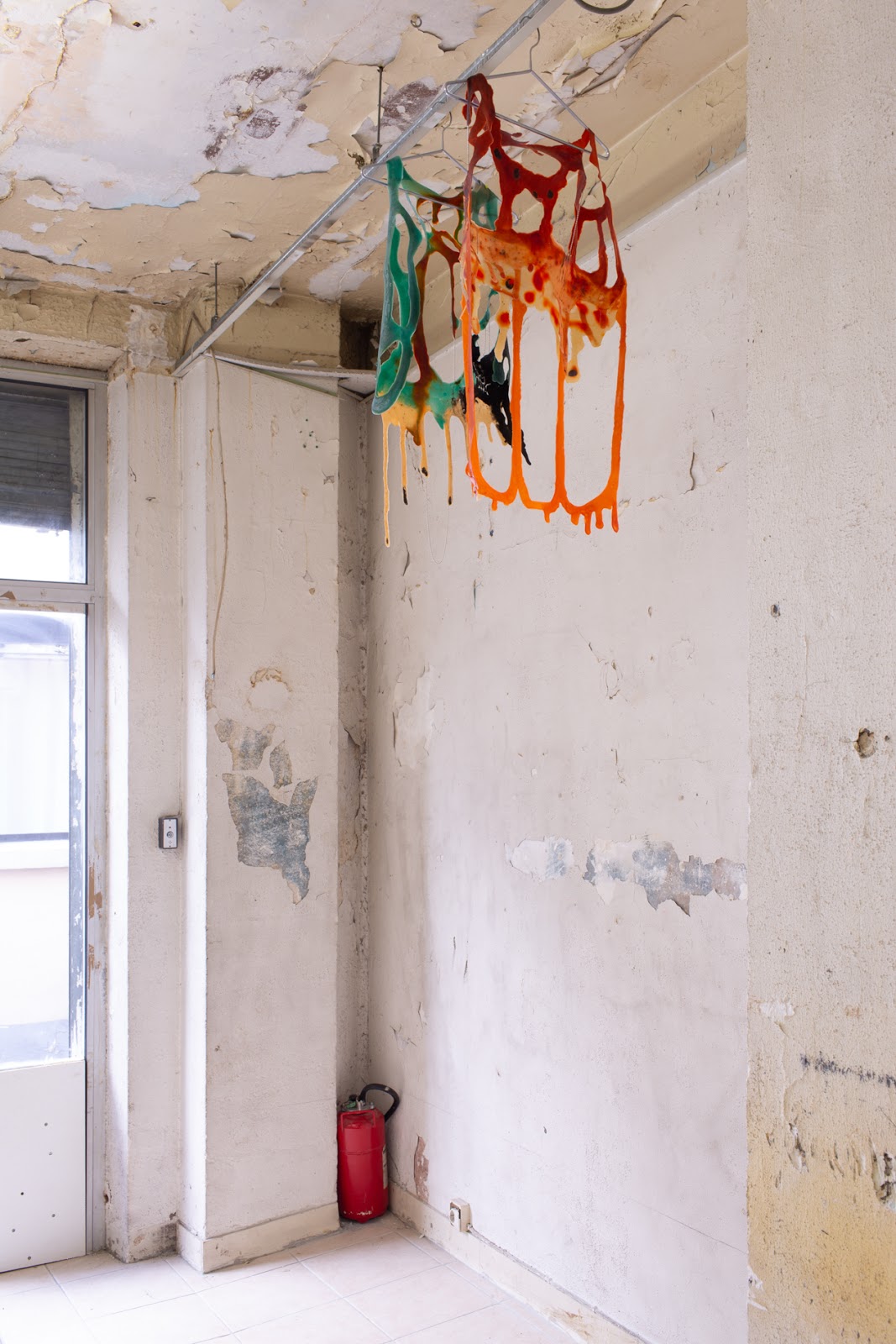 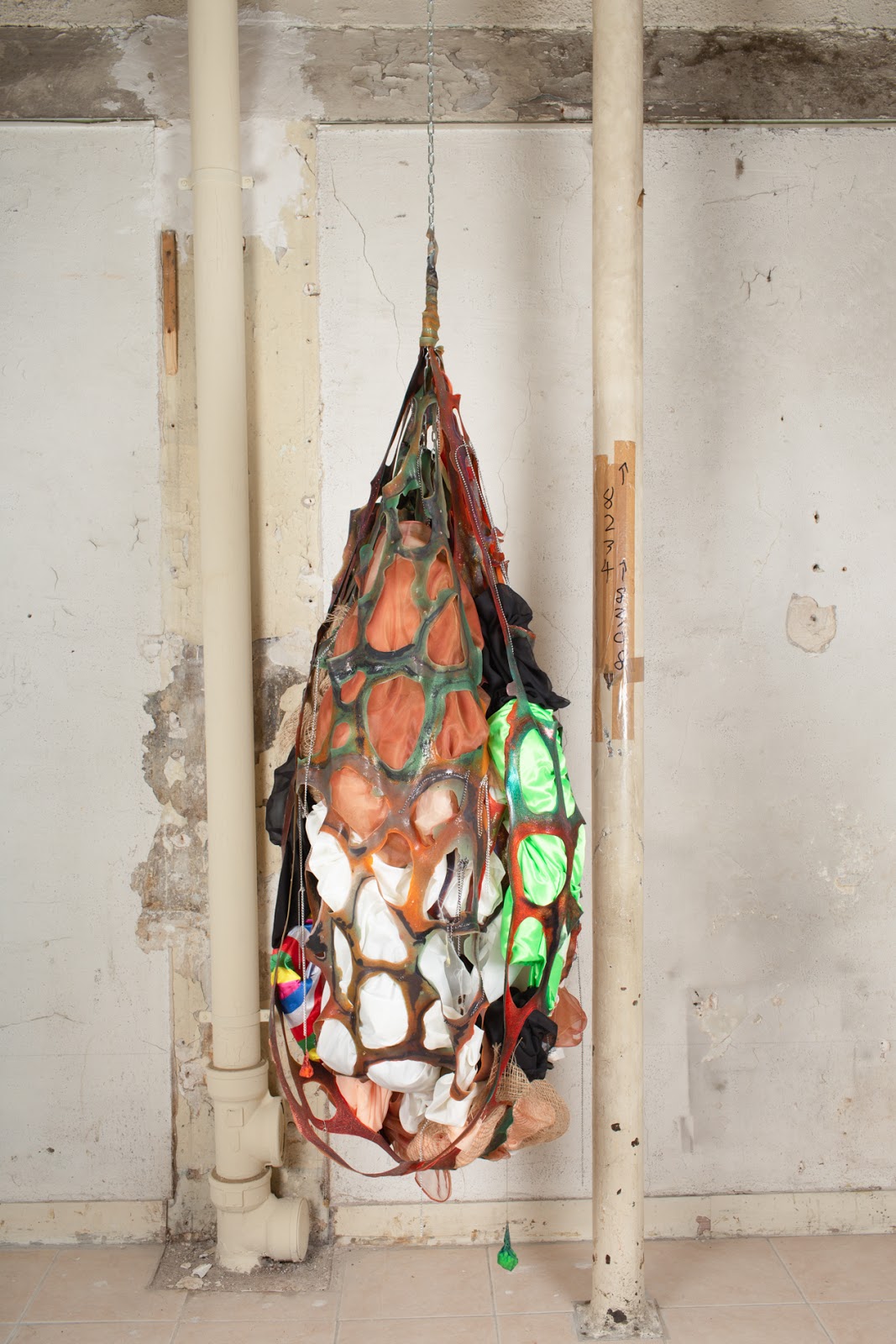 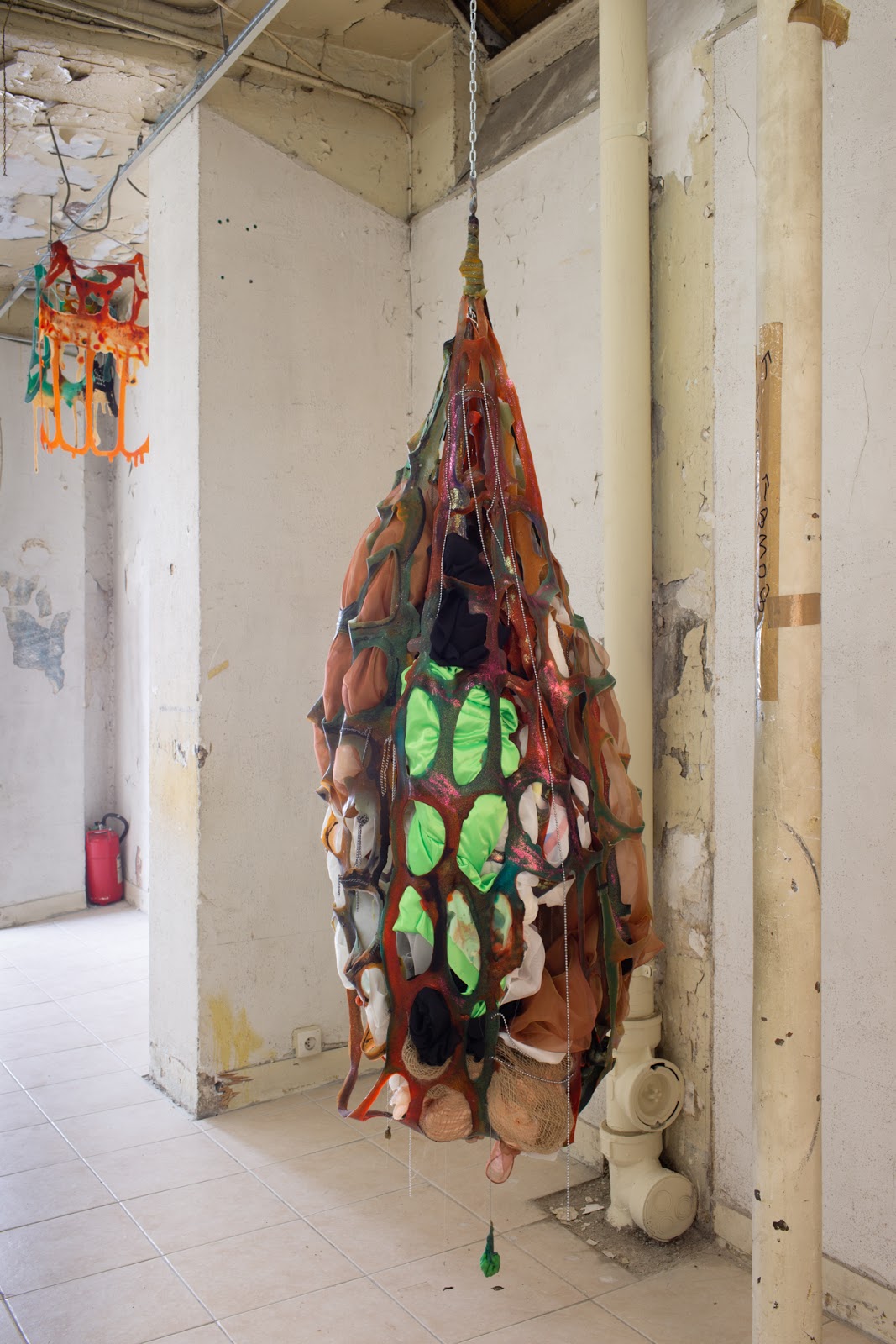 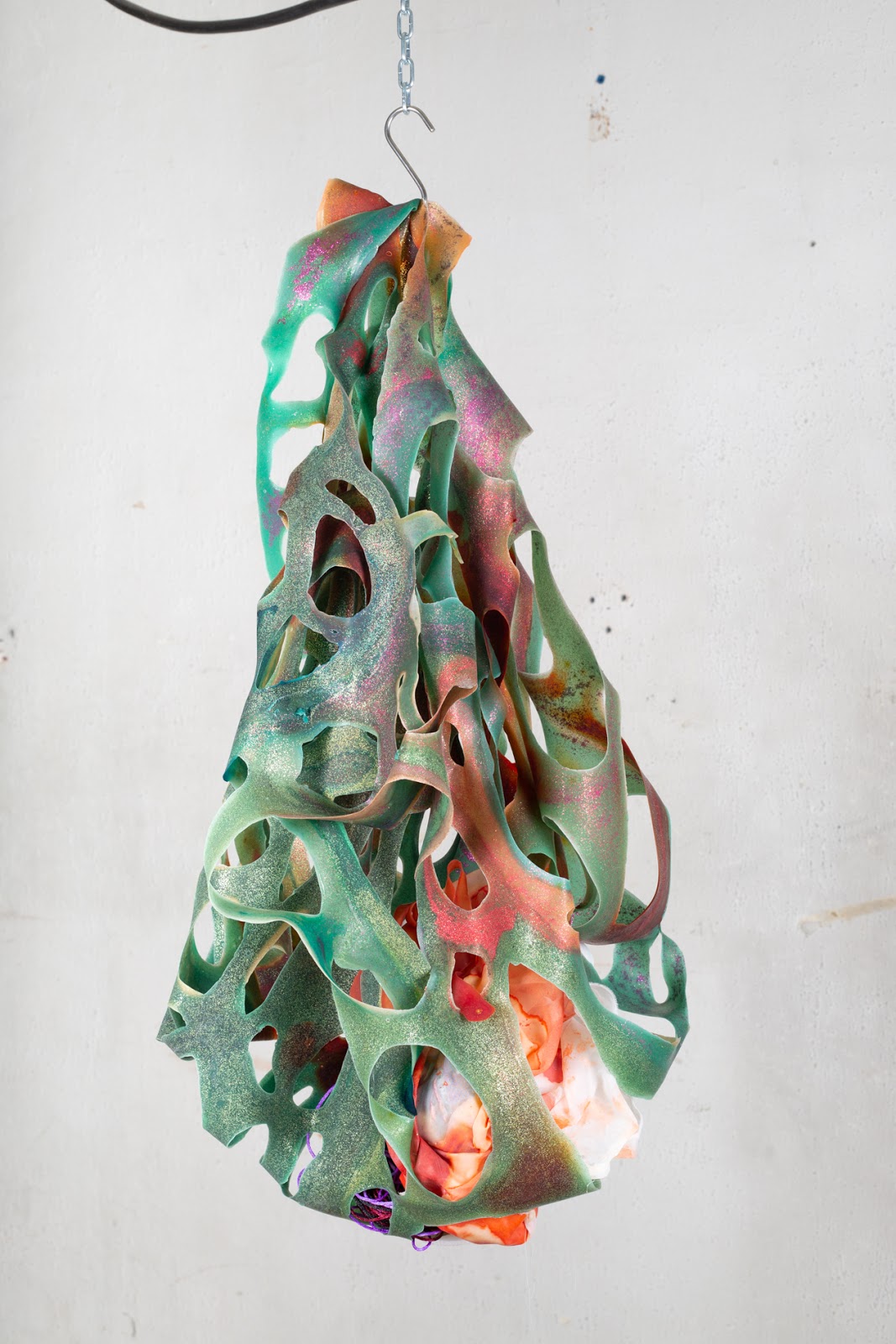 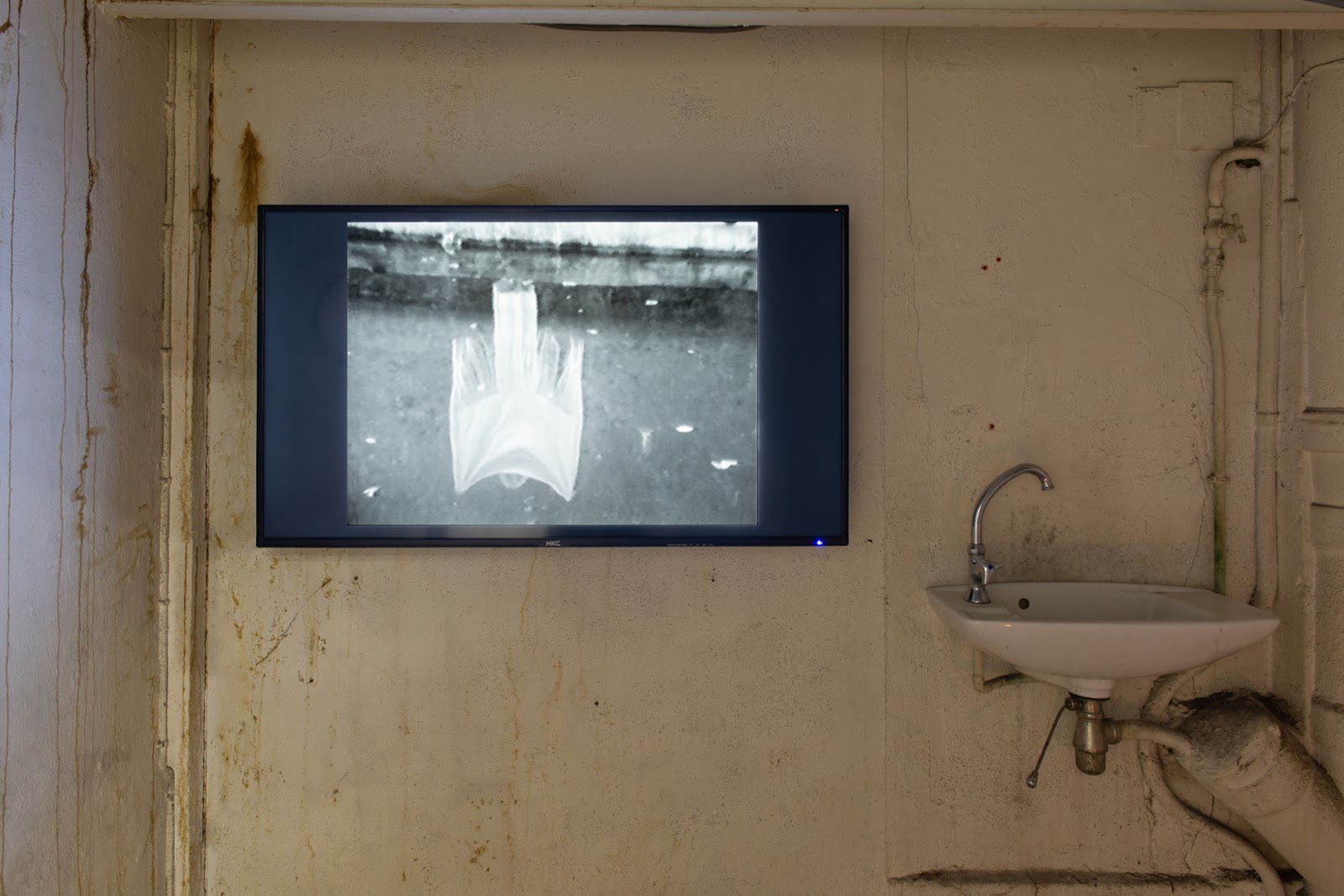 There is a tear in the eye of the dragon, you see the reflexion of yourself.
This drop is a cluster-full net, waving fabrics and pearls from far-away.
The divine reptile has a message, it bears a reminiscence.
You witness the altar collapsing under his  fire spit.
And still honour the decorum.
It burns and self-destroys to finally di use its hidden smell.
Tears will extinguish the  re, so much it creates a puddle of wax.
Put your finger in it, let it dry and see this special effect skin peeling off.
Wear the harness, go on your knees and wipe the perfume.
Wring it out in the holly bucket.
Drink it, throw up the snot of your childhood.
Then dive, dive deep under the surface of the lake to rinse o  the dregs.
And gaze at the infant body, the sexless character you became.

JOAN JONAS
(1936, lives and works in New York)
From the 60’s she starts a reflection on performance due to her close relationship with the Judson Dance Theatre. She was a pioneer in combining video, dance, performances and installations. In “Disturbances” Jonas uses reflections on a lake as a mirror to displace reality, creating a disruption and the illusion of presence. In ALTAR this video represents the historical embodiment of thematic of reflection, water and memory and the dot dot dot in which the mind will be drifting. “Disturbances begins with a Symbolist-like image of two women, dressed in white, seen only as reflections in water.... Throughout the tape the water fills the monitor, creating layers of images. The reflections on the surface of the water are superimposed on the activities that take place underneath the surface.” —David Ross
The “Pleurnicheurs” series (in english: whiners or weepers) is central

JI-MIN PARK
(scorpio, born in Seoul - South Korea, lives and works in Paris, studied at ENSAD and currently in residence at Pavillon – FRAC Aquitaine) Park makes a point in saying that her “Tears” are pictural gestures. The organic surface, the special effect skins of those sculptures are associate to the repetitive rituals of the painter. They are traces that you could reactivate, remnants of a ceremonial. We see those bundles as nets carrying all the memories of her past, swept along drops of childhood. The sacred character of her pieces comes from the Korean traditional belief of the Tae-Mong, the dream of conception a pregnant woman has and that dictates the destiny of the child. Park’s mother dreamt of a desert island far lost in an ocean, guarded by two white tigers. This liquid symbolic of the loneliness of the divine animal flows in her imagination.
ANTOINE RENARD
(1984, born in Paris, lives and works between Lourdes and Berlin, studied at Beaux-Arts de Dijon and currently in residence at Cité internationale des Arts de Paris)
to the new body of works Renard is displaying for ALTAR. It gives the keys to access the memories of childhood through nostalgic recollections or reminiscences of the sensitive sadness of kids. The wax pieces are weeping too, dripping their fragrant tears on the floor. They are architectural models echoing the recent destruction of Notre Dame, di using the smell of wood sap and burning incense. The tears will extinguish the ames and symbolically over ow. The purge buckets, used in shamanic ceremonials in Peru, where the artist spent much time learning with the curanderos perfumeros, are receptacles of liquid odours and de facto recollections of the past.
Tags Antoine Renard, Artemis Fontana, Ji-Min Park, Joan Jonas, Lazy exhibitions, Paris
Newer Post Older Post Home