I had the pleasure of speaking with Irati Inoriza about what she has been doing recently and the show that she has just opened in C.C. Montehermoso. Her practice focuses on the movement and relation in between bodies, seeking the reactions in our everyday life, rhythms and gestures of the human body.

MG: I need to ask this, how a Basque, that had studied in a Basque University ends up with performance as a medium? When did you feel attracted by it and why?

II: All started when I was studying at the university, at the beginning I was painting a lot, I wanted to be alone, to find things by myself. I got a bachelor in technology and when I started the university, a new world opened in front of my eyes. I chosed the laboratory subjects, as with the other subjects you are forced to do something in strict relationship to that medium, but in the laboratory instead you were completely open to experimentation. Undoubtedly the book “The Unbearable Lightness of Being” by Milan Kundera opened my eyes, and still today I feel completely identified by. I wanted to continue my education abroad and I found out that my university had an agreement with Brno University, the place where Kundera born and I moved to Czech Republic, where, truly fascinated, I found a proper degree focused in performance directed by Thomas Miller, the lessons where wherever, around the city, festivals. I found an other way of doing, the approach to things that doesn’t need to be materialized. 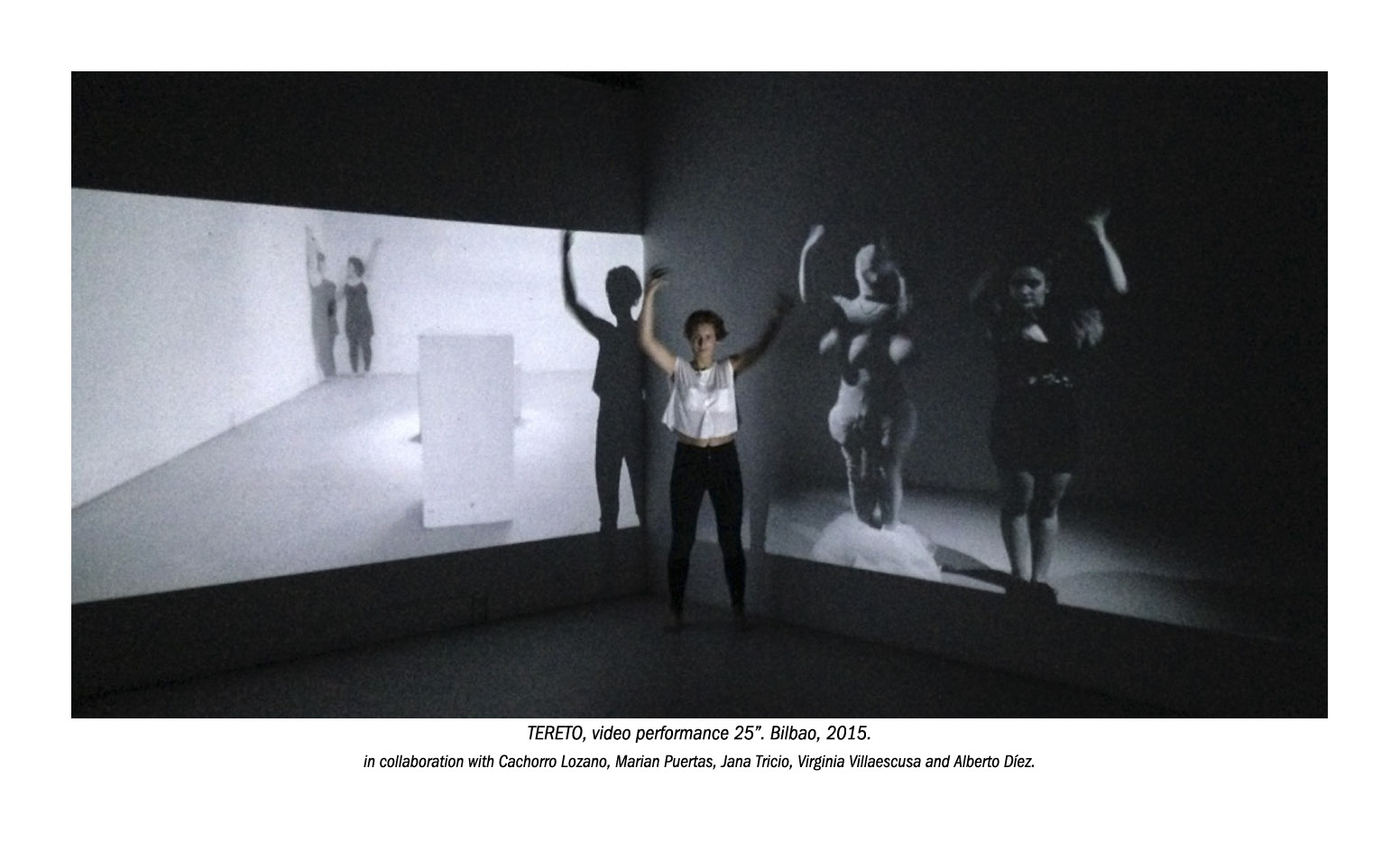 MG: So, the idea of the non-materialization of the art picked your attention, I guess. What happened later? Even if you are an emerging artist with a recent beginning you achieved interesting residencies until today, can you tell us something about your first experiences working with other artists and in other countries?

II: My first residency was at FARM (Favara, Italy). After being guided by other performers and teachers that was the beginning of the experimentation by “myself”, I cannot forget that experience, as I was alone and I was trying to express art through performance. At that point, somehow I understood that I wanted to highlight the relational structures that happen in between artists.

Part of my personal development happened during my return to Bilbao too, after some experiences abroad I was selected to be an artist in residence at BilbaoArte Foundation (Bilbao, Spain). There, a place with more than thirty artists at the same time, I met Carlota Neris, we both had interest in the limits of the collaborations in between the artists within residencies. Even if I had to present an individual project, I created with Carlota an exercise called “A time where…”, the proposal arisen because we wanted to show what the artists had been doing along their residency and we asked them during four days, to work in a 30’ timeframe in an exhibition space and suddenly after one artist, an another came to modify or add items to the previous result. For me, that one was my piece, the manifestation of all corporal movements by those artists within the space. 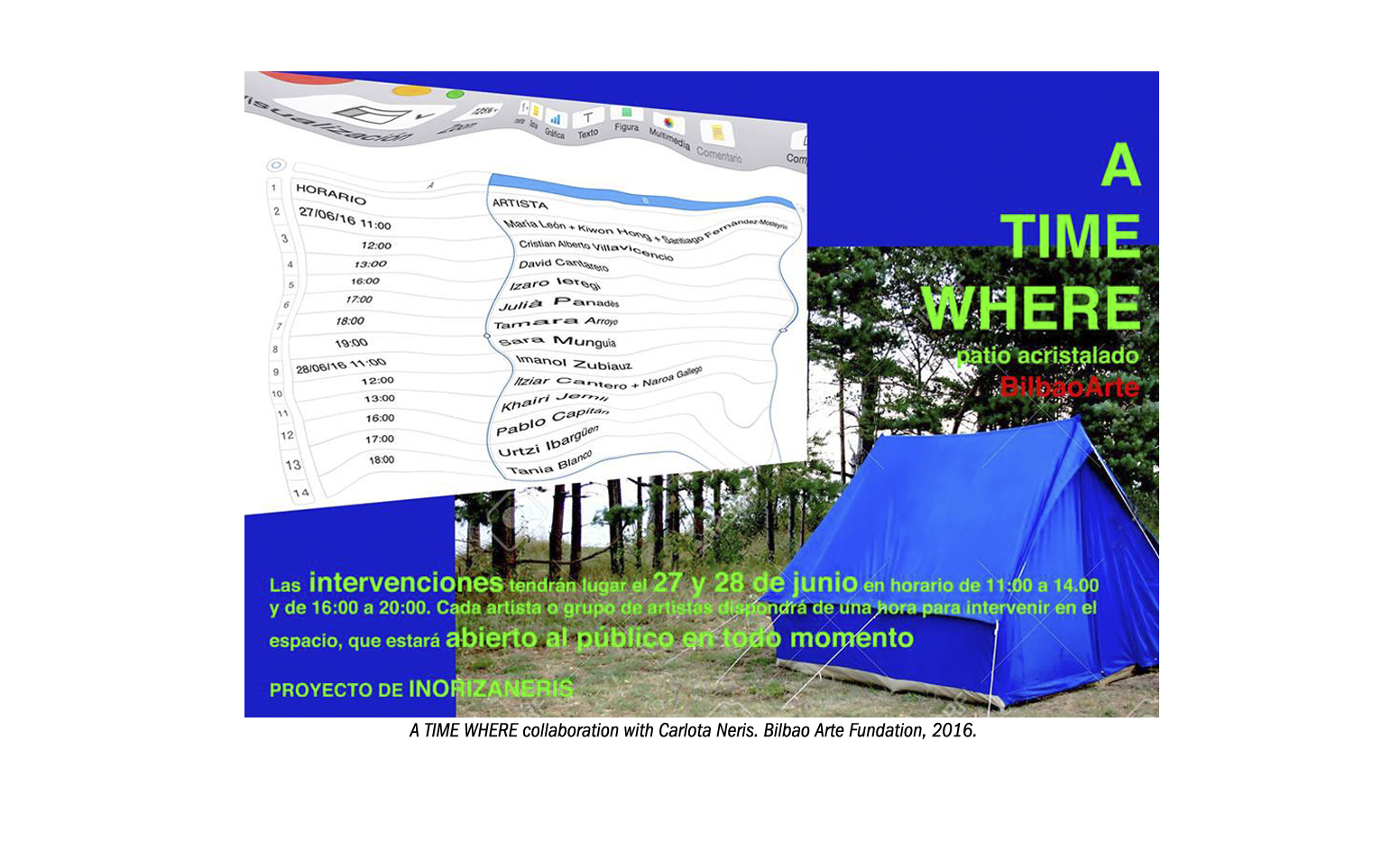 MG: How about your exhibition at Casal Solleric? That show varied every week thanks to the performers. How was the process of choosing the performers, how to organize them?

II: Well, first of all, the performers are not “real performers”, what I mean with that is that I tried to get random people, volunteers that wanted to feel on their skin actions about the relationship in between their bodies, a sort of empathy in between them. If you hire a professional, the meaning of the act is completely different as they have a background already.

The show I did there, “take your broken heart, make it into art”, a title that came from a sentence that Meryl Steep said at The Golden Awards. With that, she pretended to make reference to the absence of bodies, how to perceive the body of the other. In order to explain that, my solo show displayed a series of actions that sought to generate a shared experience. Six performative sessions in which we show the concepts of contact, breathing, movement, mirror, balance-disequilibrium and voice. 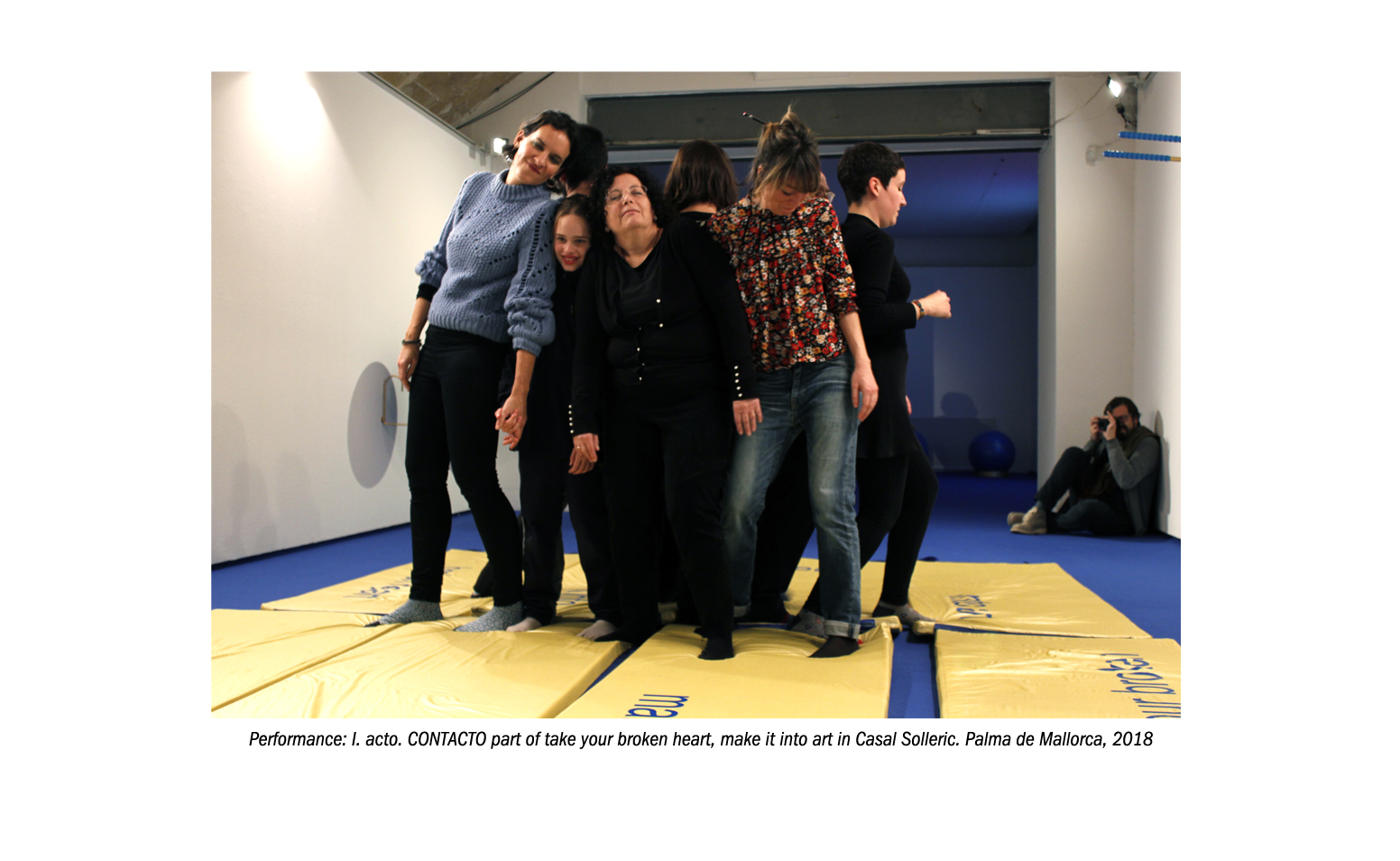 MG: Could you please explain further? What did you want to transmit with that performative piece?

II: There is a part of my work that comes from the act of interrogating. In that occasion I wanted to interview a person that had an experience that I have never had, and I tried to empathise. I want to work on the effect of the contact. The choreography that the performers did, was completely different to the one that I imagined because they were not professionals and they did have limitations regarding the movement, the body positions, etc.
There’s so much fiction in performance, and I am interested in how people transmit their affects with the body itself and how they transform.

MG: Now that you speak about these non-professional performers, I need to ask you about your current residency at Centro Huarte and the current show at C.C. Montehermoso. Having a look at these pictures I see that you are working with wrestling and blue and red connotations.

II: Coming from the same idea of bodies and movement I felt attracted by wrestling for the first time. Their movements, the bodies, the ideologies that are around, the primary colours, and the result of two bodies sometimes becoming an only one. The Olympic wrestling has its origins in the Greek-Roman fight, in the Greek-Roman period, the women couldn’t participate, in the Olympics they can.
During my residency at Centro Huarte I became closer to red and blue, colours that I had started using last year and that stayed as an important part of my research until today. The suits that the Olympic players used are essentially those two colours, that could bring us to the primary colours of the round pallet. Along the time I spent here, I experimented with inflatable dolls in order to recreate sculptures that simulate the movements of the fight as the fighters themselves get training with them. 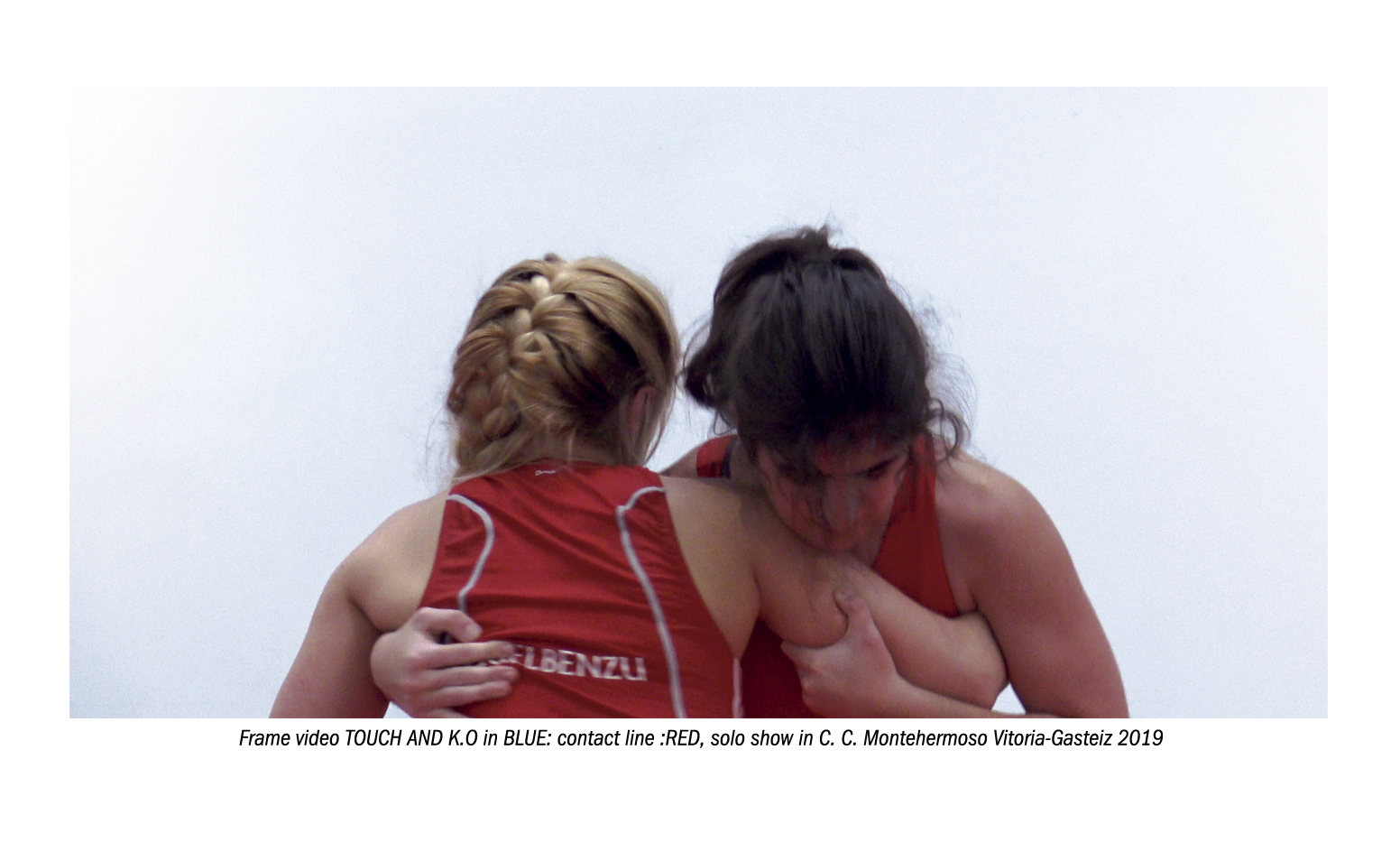 Those inflatable dolls are covered by flower petals (as in Olympia when the players won the public threw them petals of flowers). This has been the first time that I use sculpture as a medium in my practice.
For my current solo show at C.C. Montehermoso I will present some of those sculptures, together with a recent performative artwork that is composed by ipads, yoga mats, spotlights for each person and performer. The overall show is a display made out of a choreography generated by the connection between physical and the virtual bodies. The contact, understood as a link action, drives my interest in the links that take place between bodies, starting from the touch originated in the relationship with the other in a physical and virtual way.
I am attracted to the approximation that happens between living and worldly bodies that interact, among the corporalities that we are. Nearby, linked, in conflict, with strength, weight, form, tempo and phrasing. It is an abduction exercice of relationship “with” the other (body), not “of” the other.  On 13thApril I will do a wokshop out of this piece. 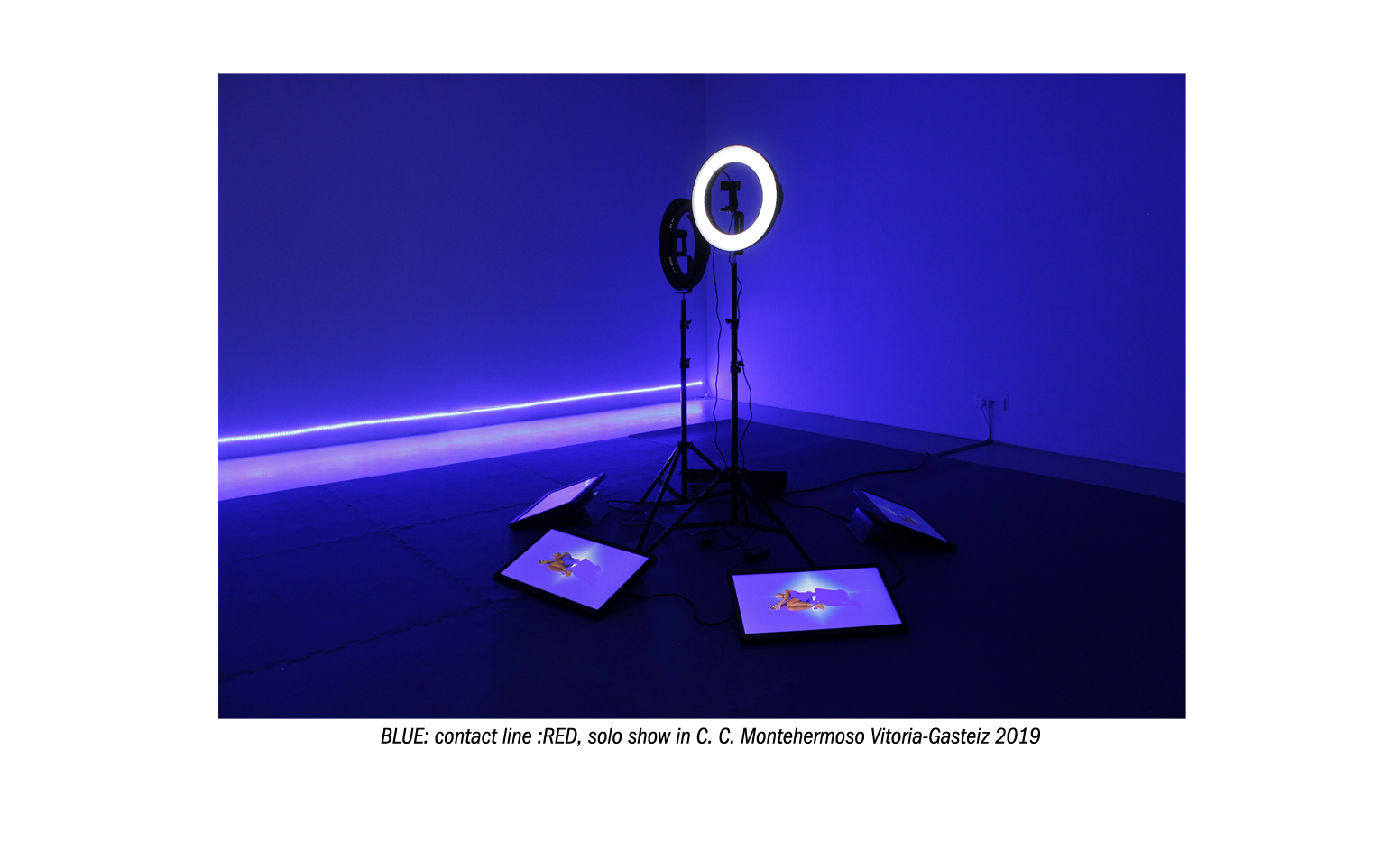 II: For now, I will only have 7 weeks’ residency at Zsenne in Brussels where I will continue my research, and hopefully other things to come that I am waiting resolution. 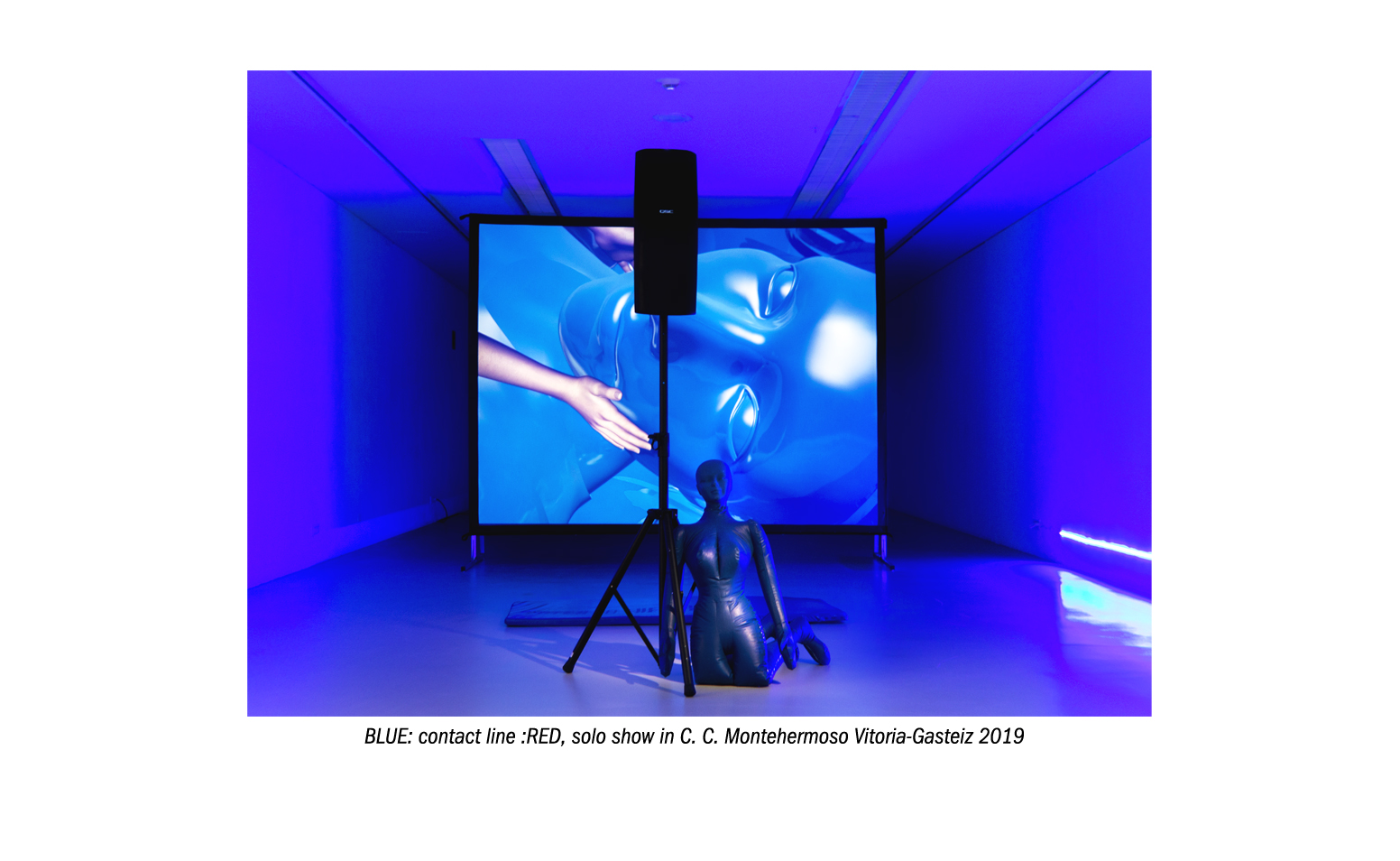 Irati Inoriza (b. 1992, Balmaseda, Spain) holds a BFA and MA in Art Creation and Research from the UPV/EHU in Spain, complemented with Performance Studies at Tomas Ruller’s workshop at the Brno University of Technology (Czech Republic).
Her recent projects such as “Blue transformation” has been selected by INJUVE 2019 to do a grupal show in 2020 (Madrid, SP), her project ‘What a Blue!’ has been granted by the Council Office of Bizkaia 2018-2019 (Bilbao, SP) to develop in A-DASH Space (Athens, GR) and Zsenne (Brussels, BE), and ‘Blue: contact line :Red’ is going to be part of the Montehermoso Cultural Centre Exhibition Programme 2019 (Vitoria-Gasteiz, SP). Also, ‘take your broken heart, make it into art’ project was the winner of Artistic Exhibition Price of Casal Solleric 2017 (Palma de Mallorca, SP).
She has done artist residencies at L'Estruch (Sabadell, Spain), BilbaoArte Fundazioa (Bilbao, Spain), and Farm Cultural Park-Favara (Sicily, Italy). Her work has most notably been exhibited at ‘Futuro Presente’, Artistas Emergentes <30 INJUVE in Madrid, Spain (2017); Mr. Pink (Valencia, Spain), Laboratorio Lamosa (Cuenca, Spain), Okela (Bilbao, Spain) and MALUMUT (Ostrava, Czech Republic) amongst others.