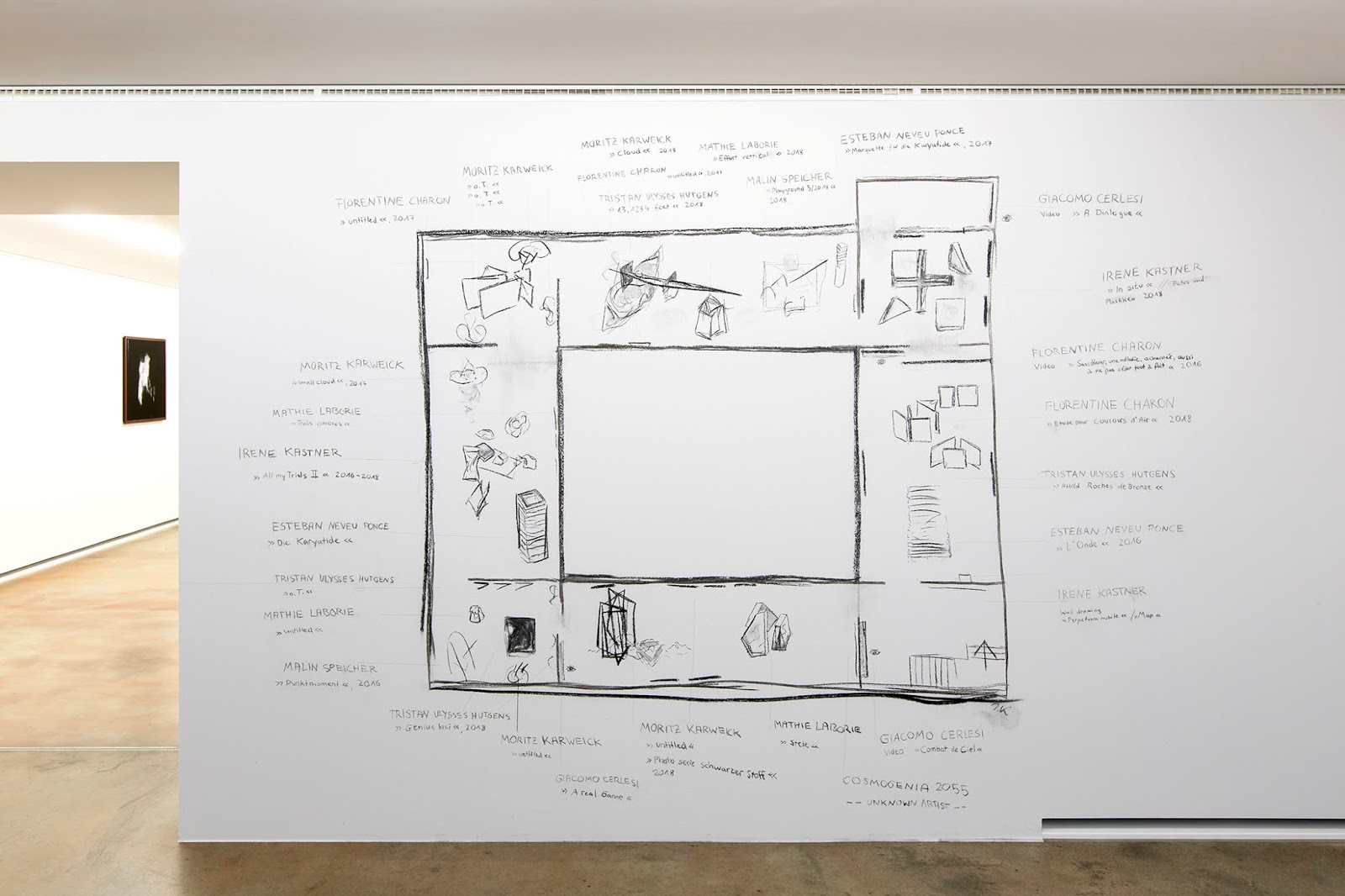 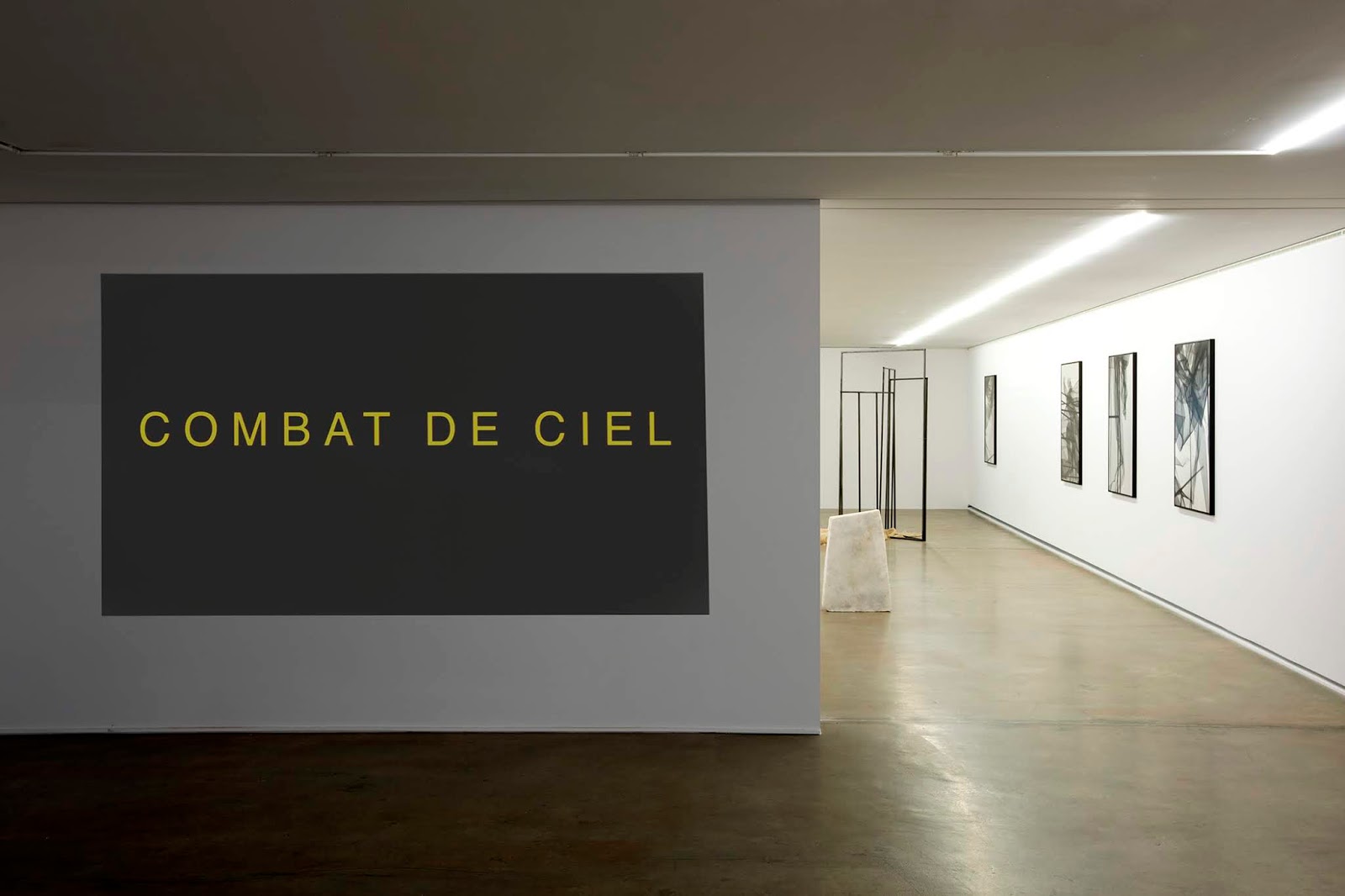 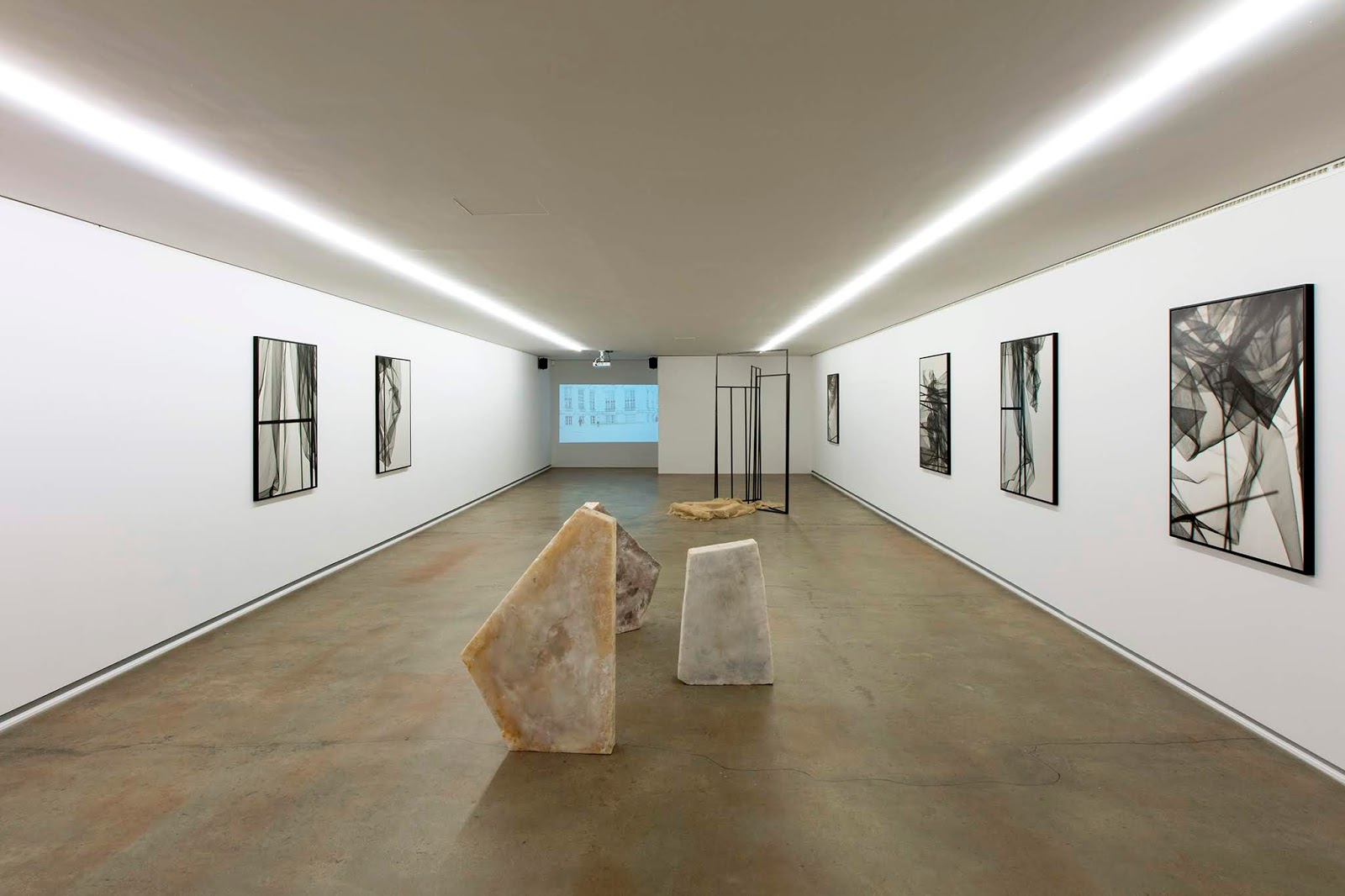 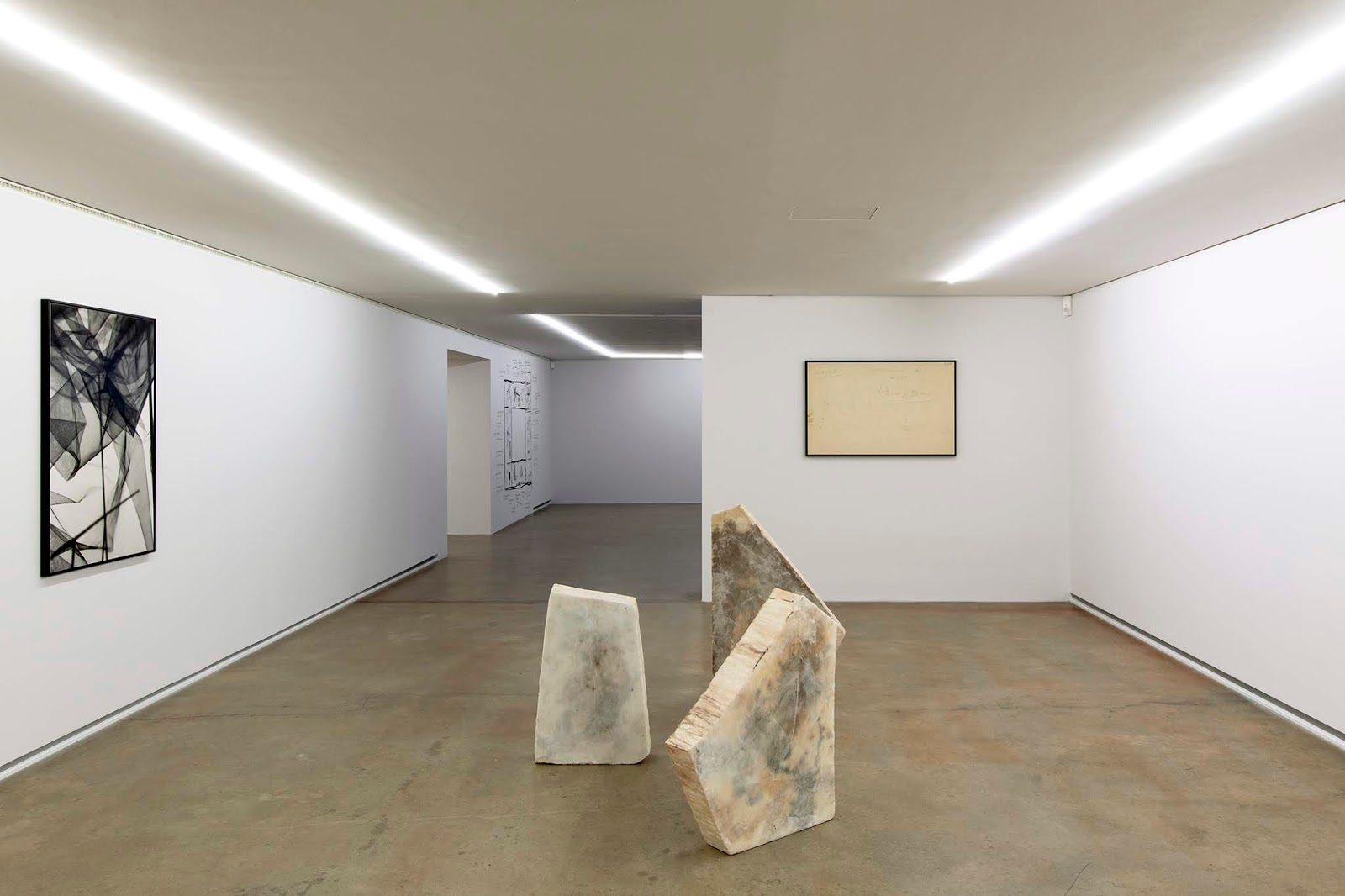 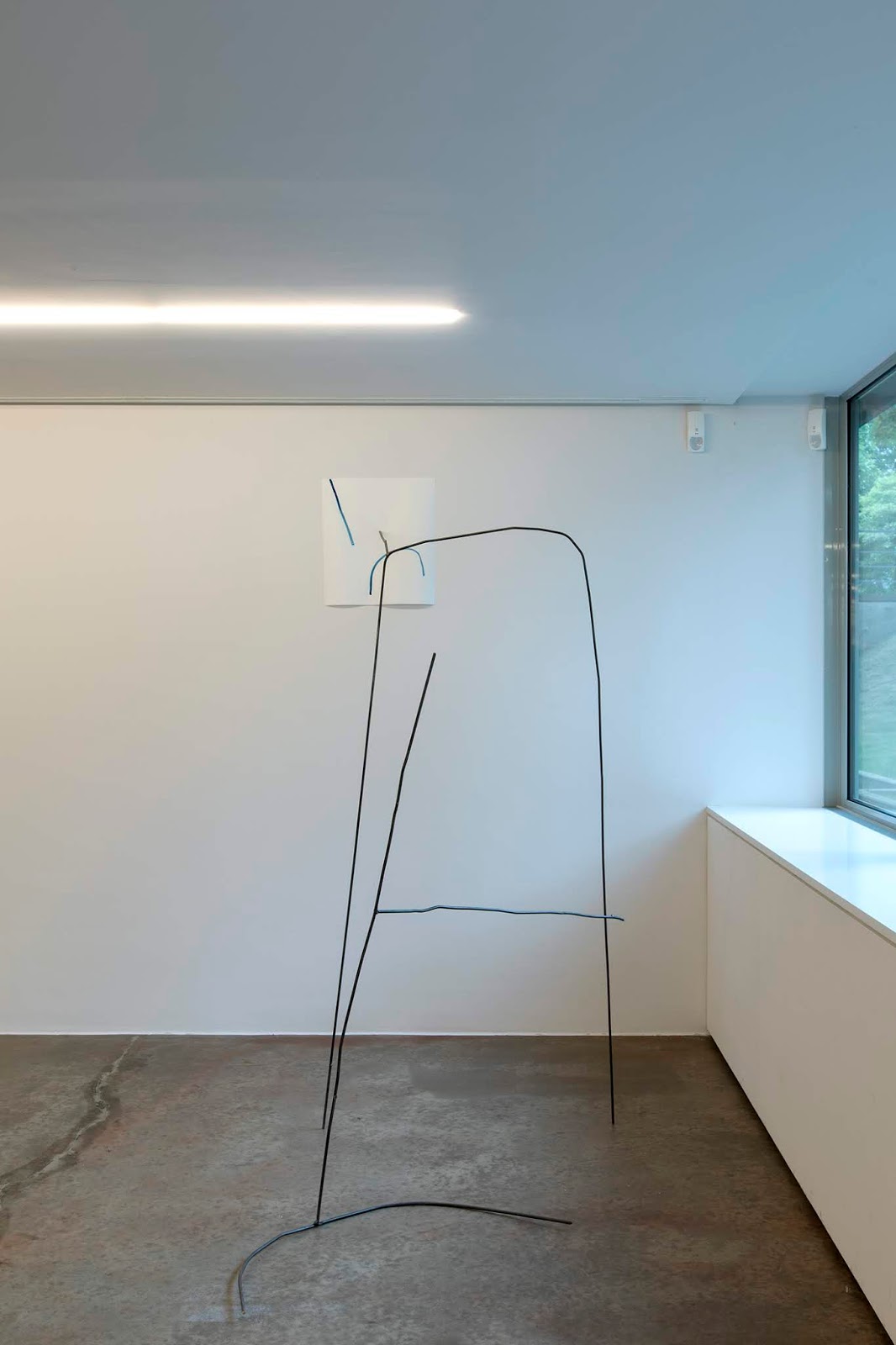 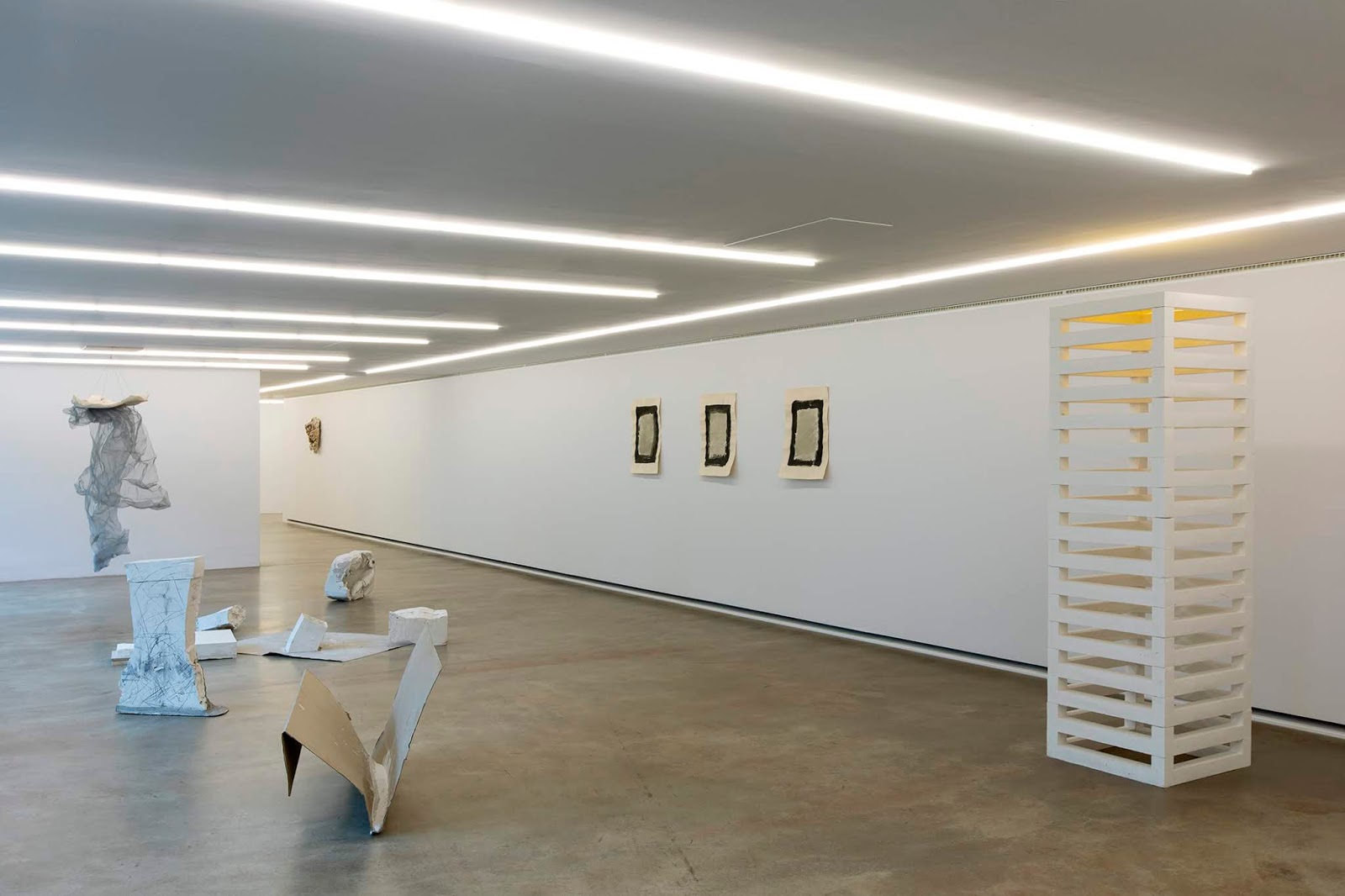 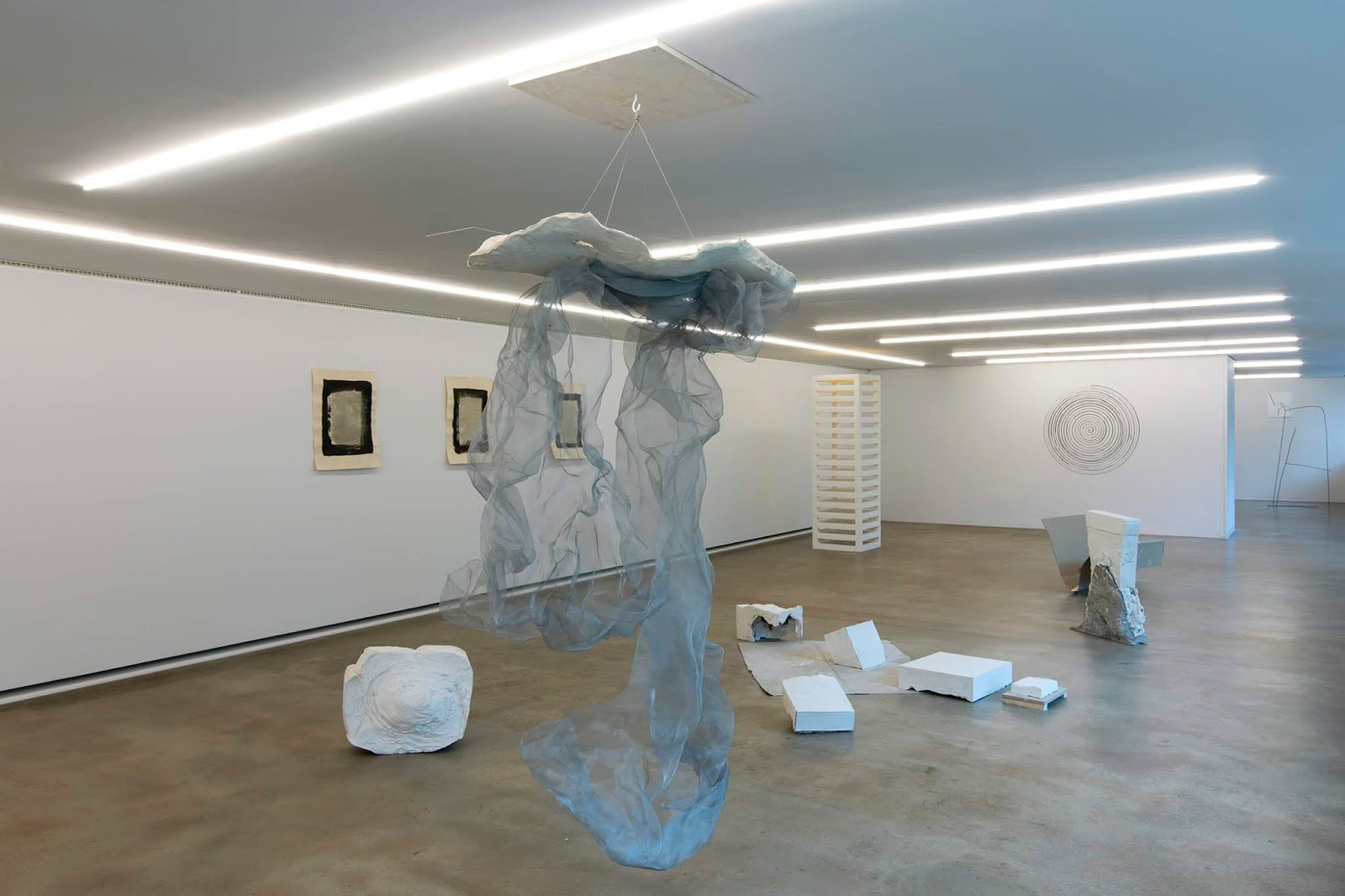 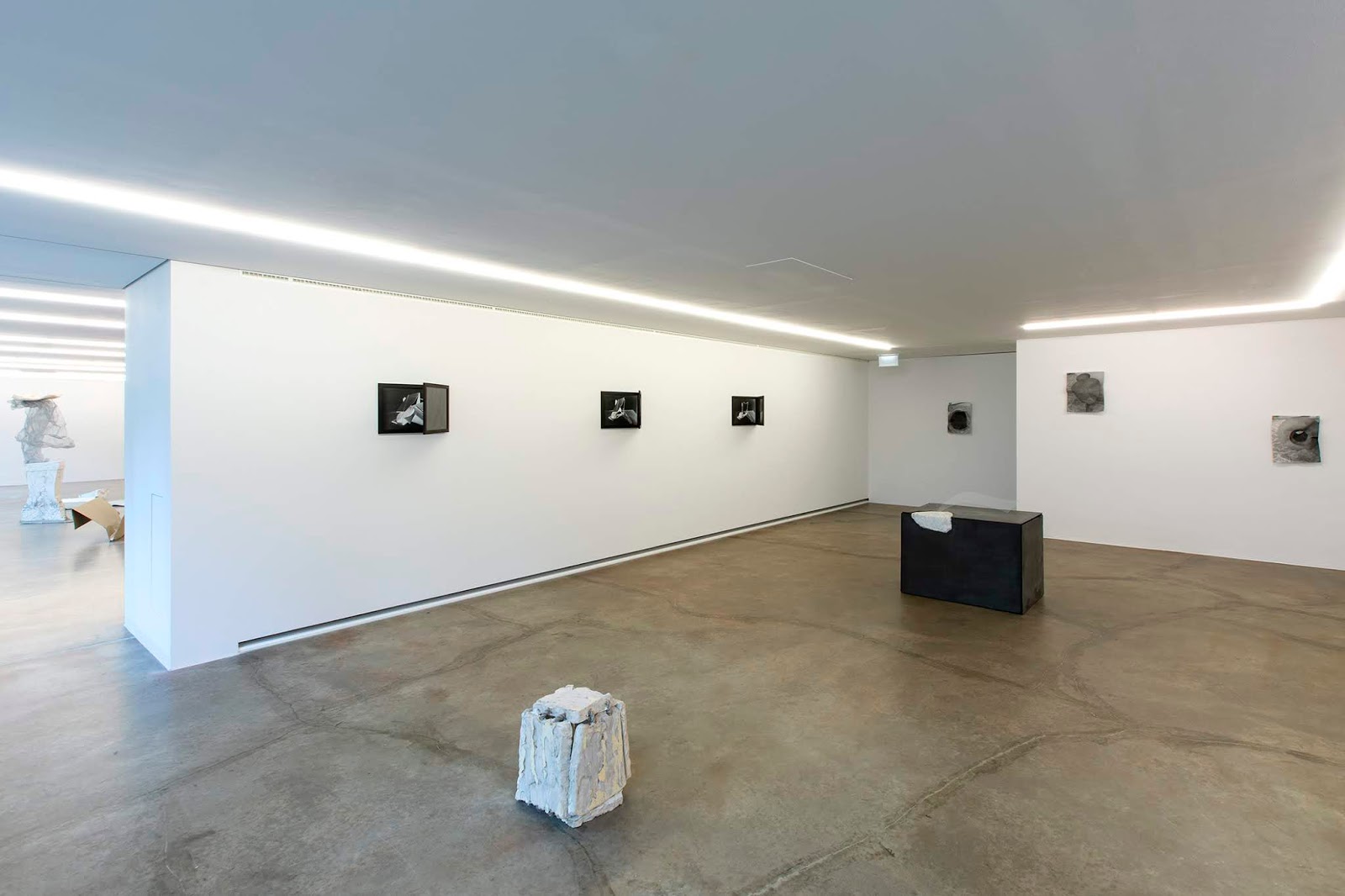 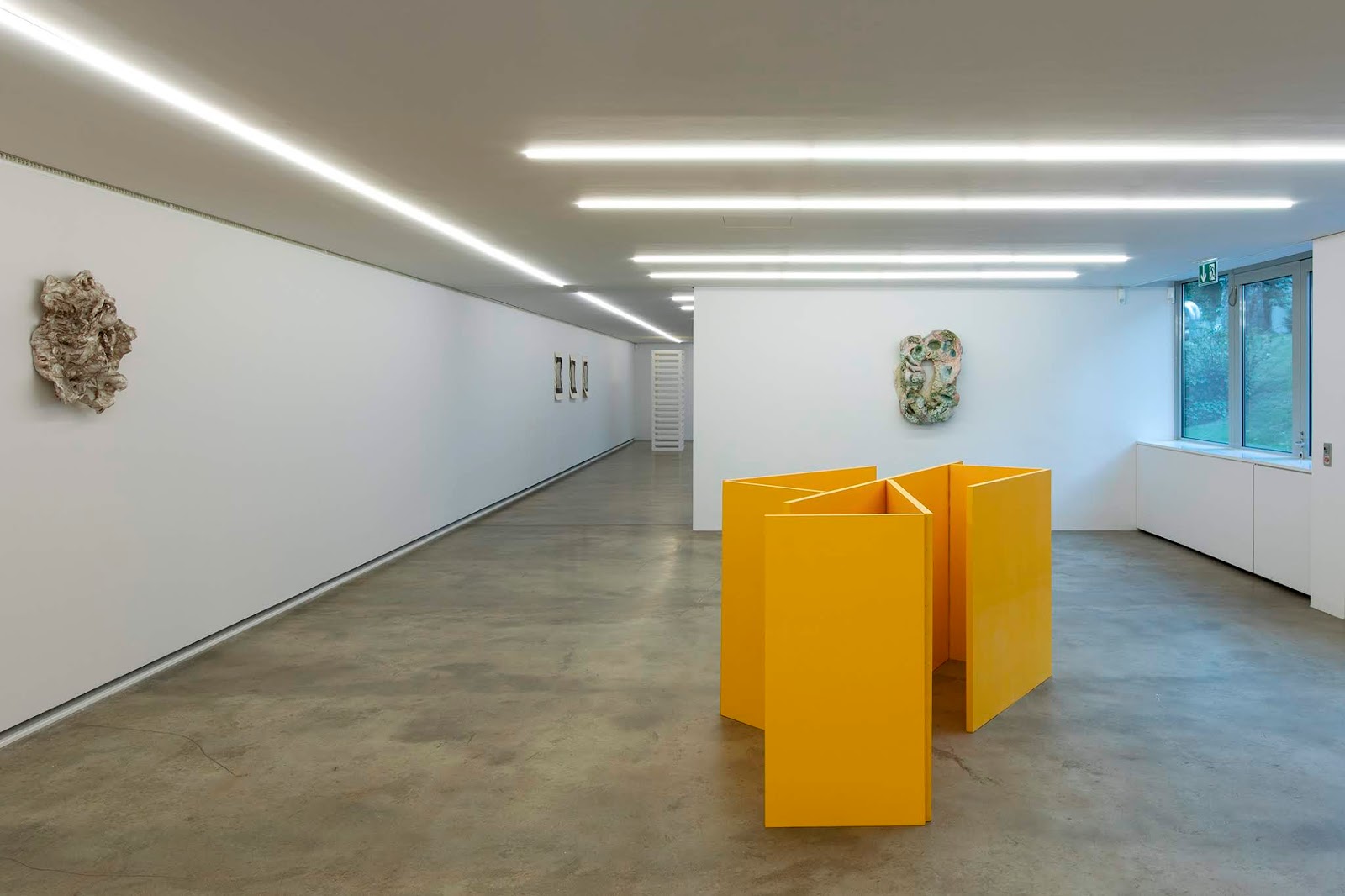 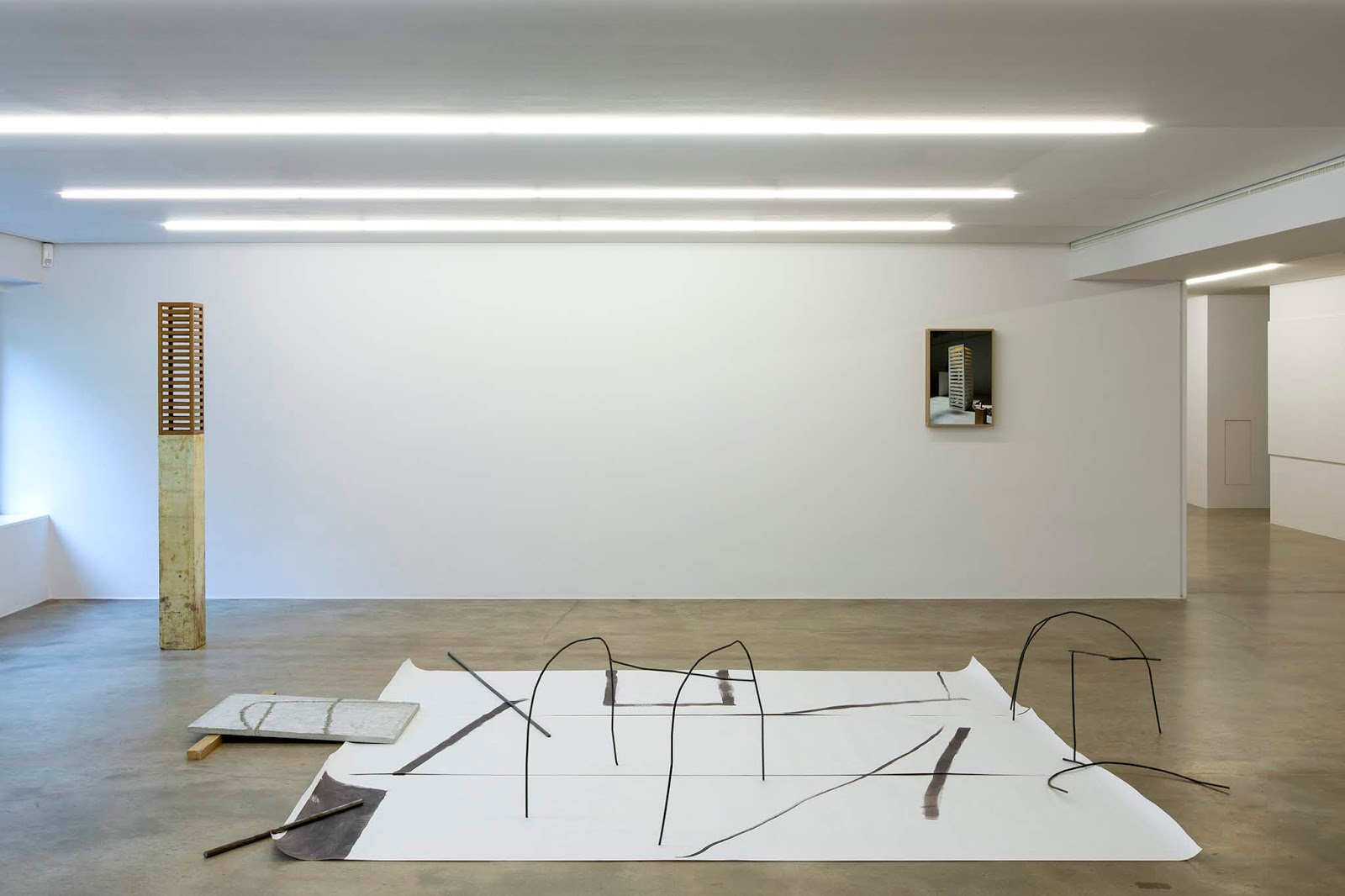 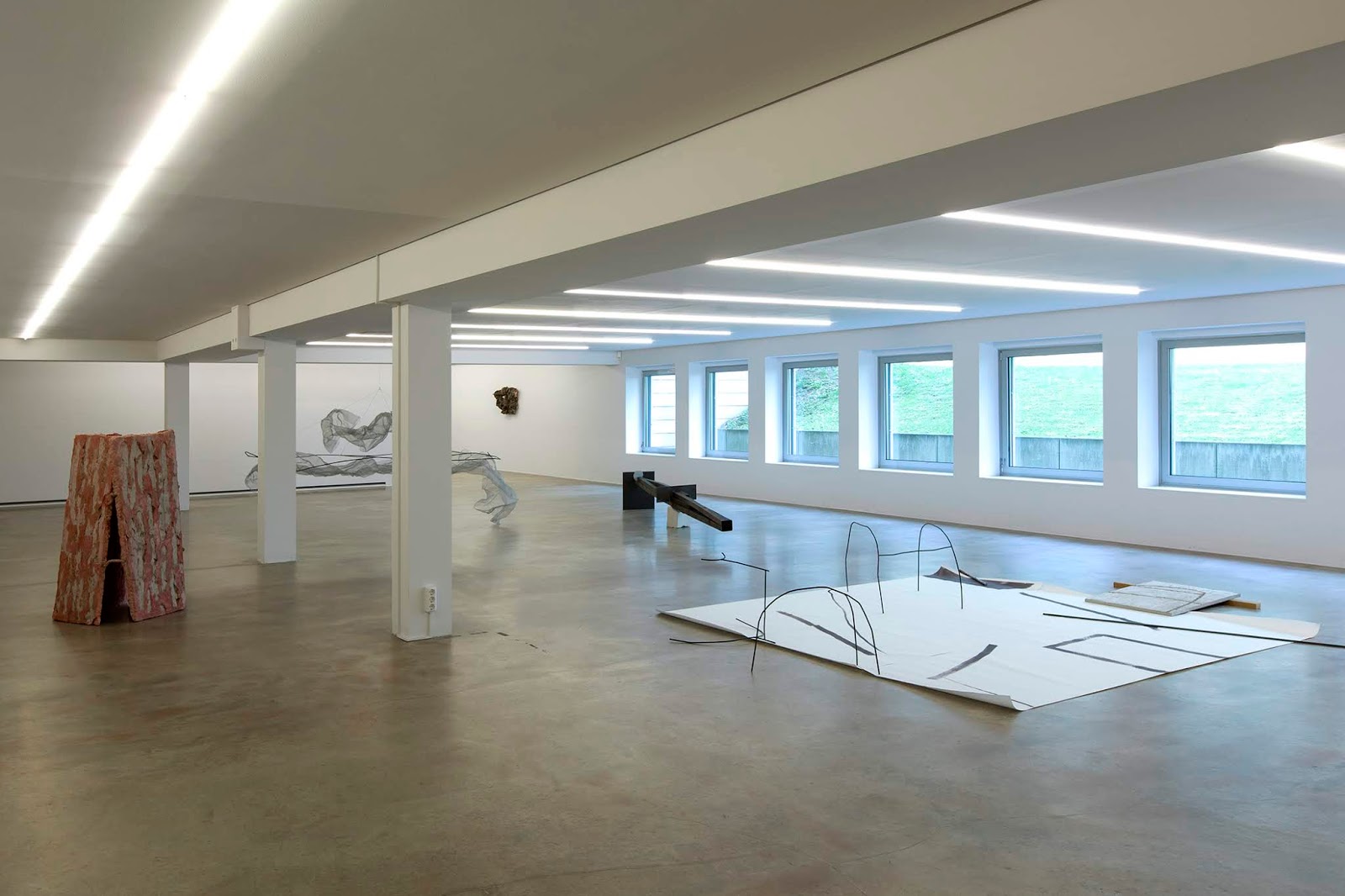 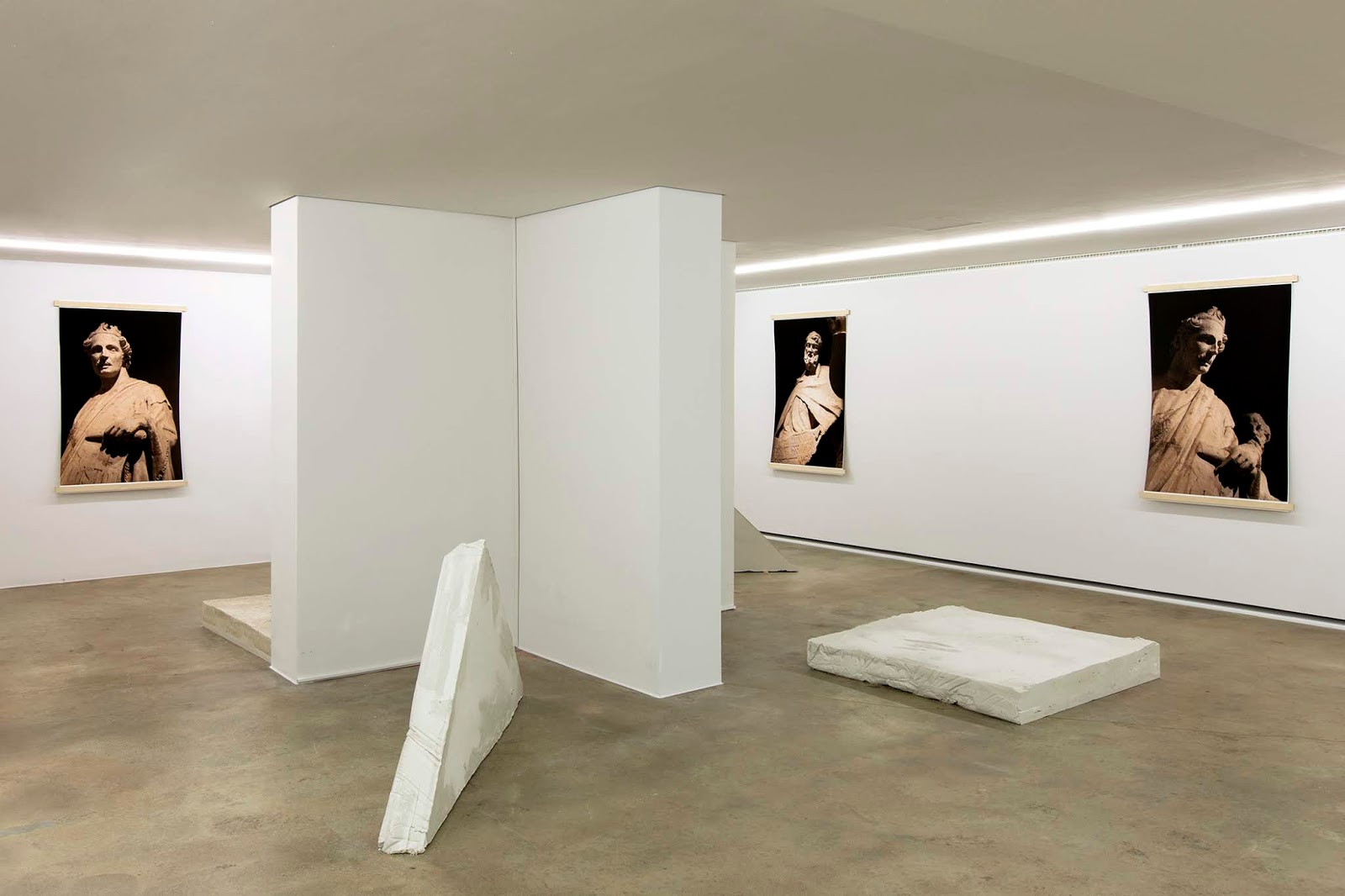 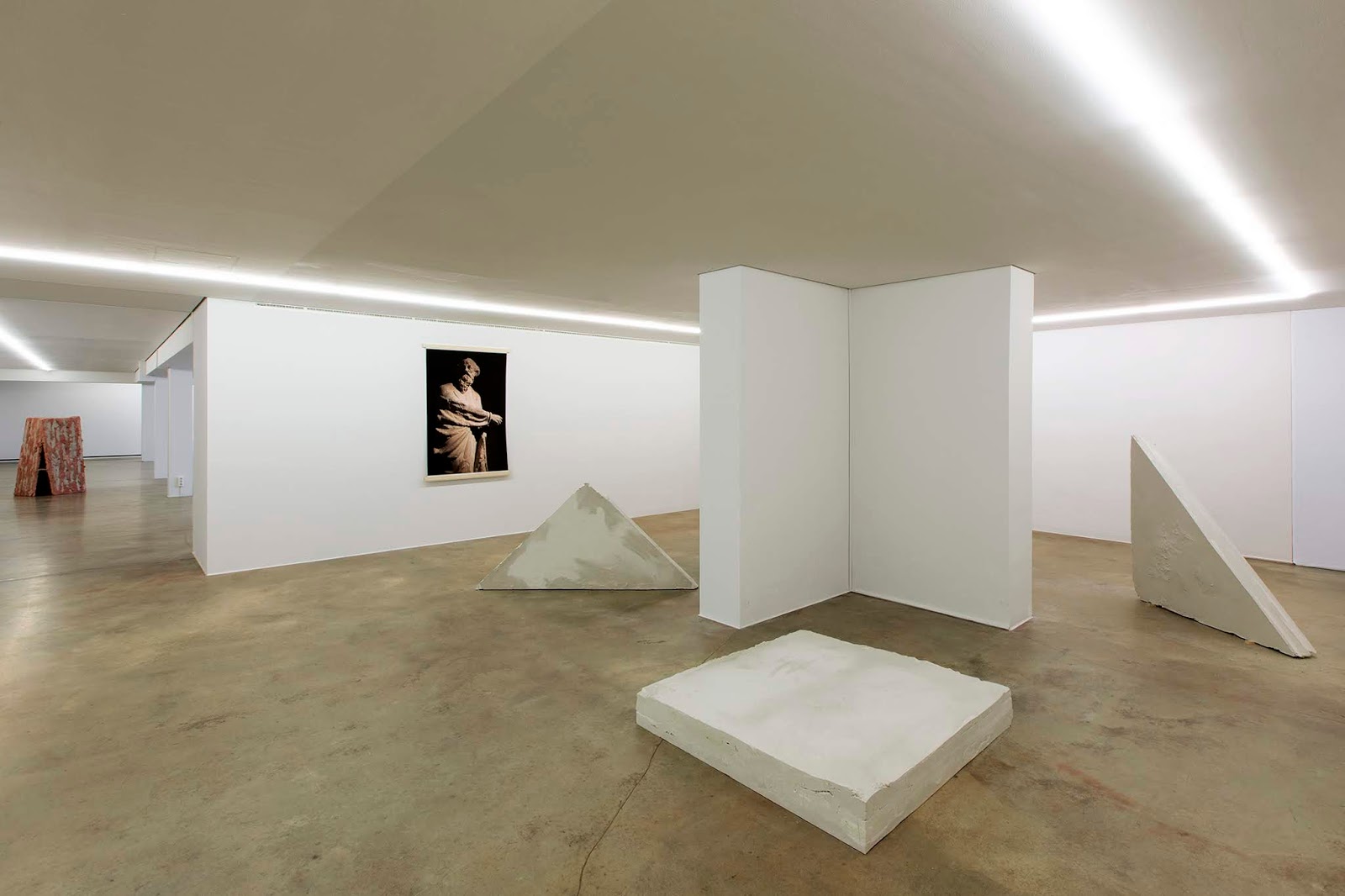 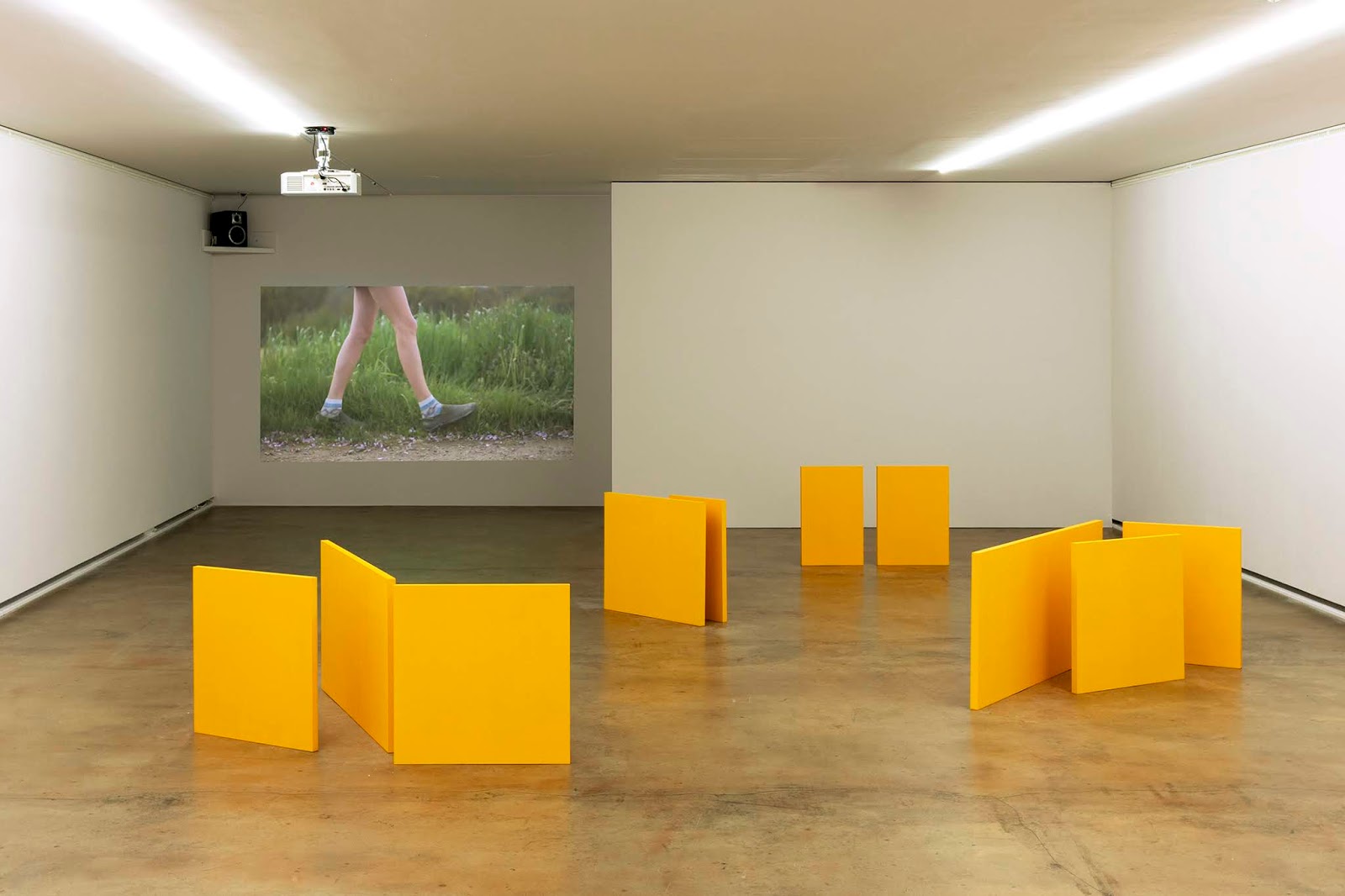 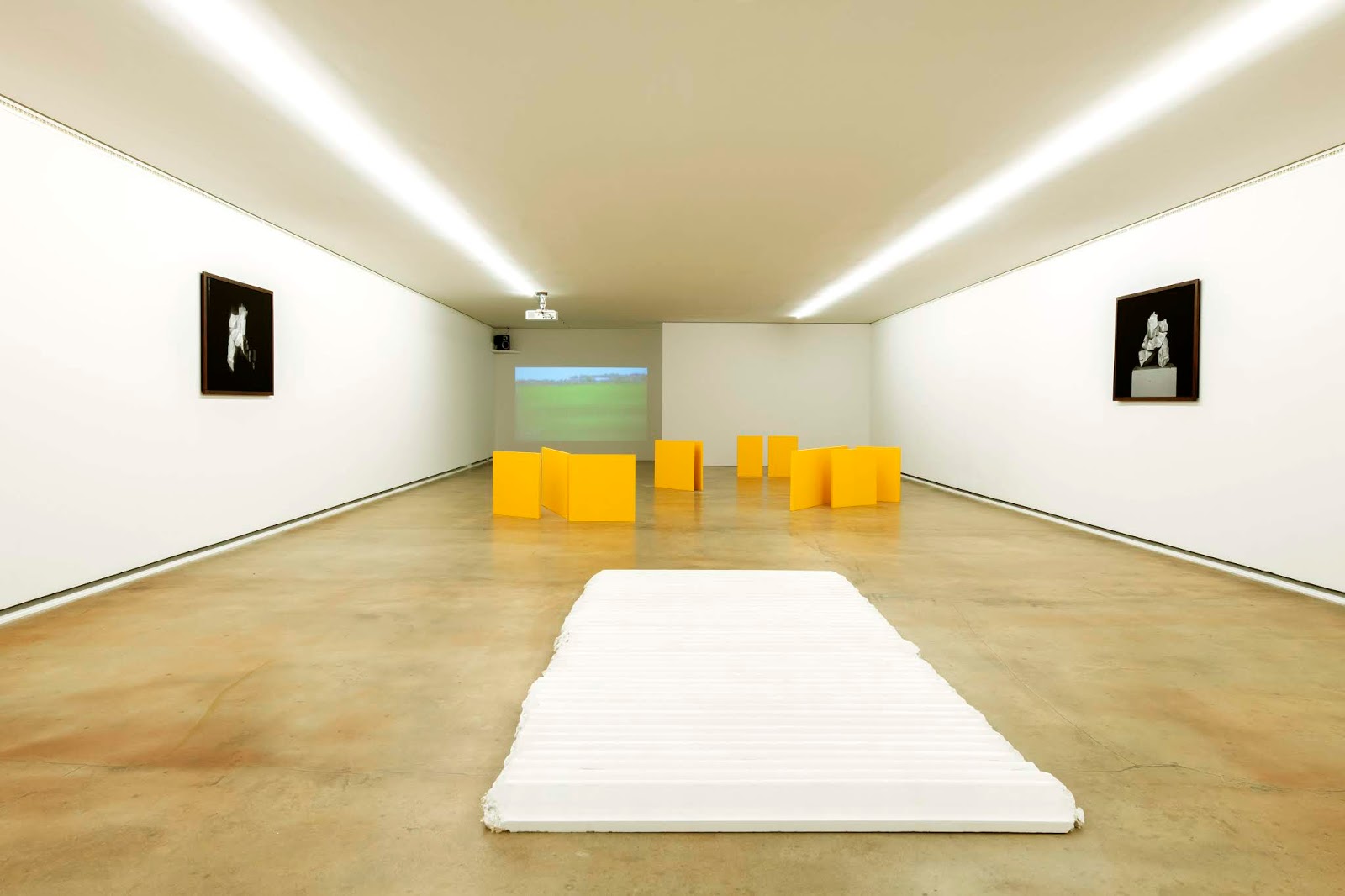 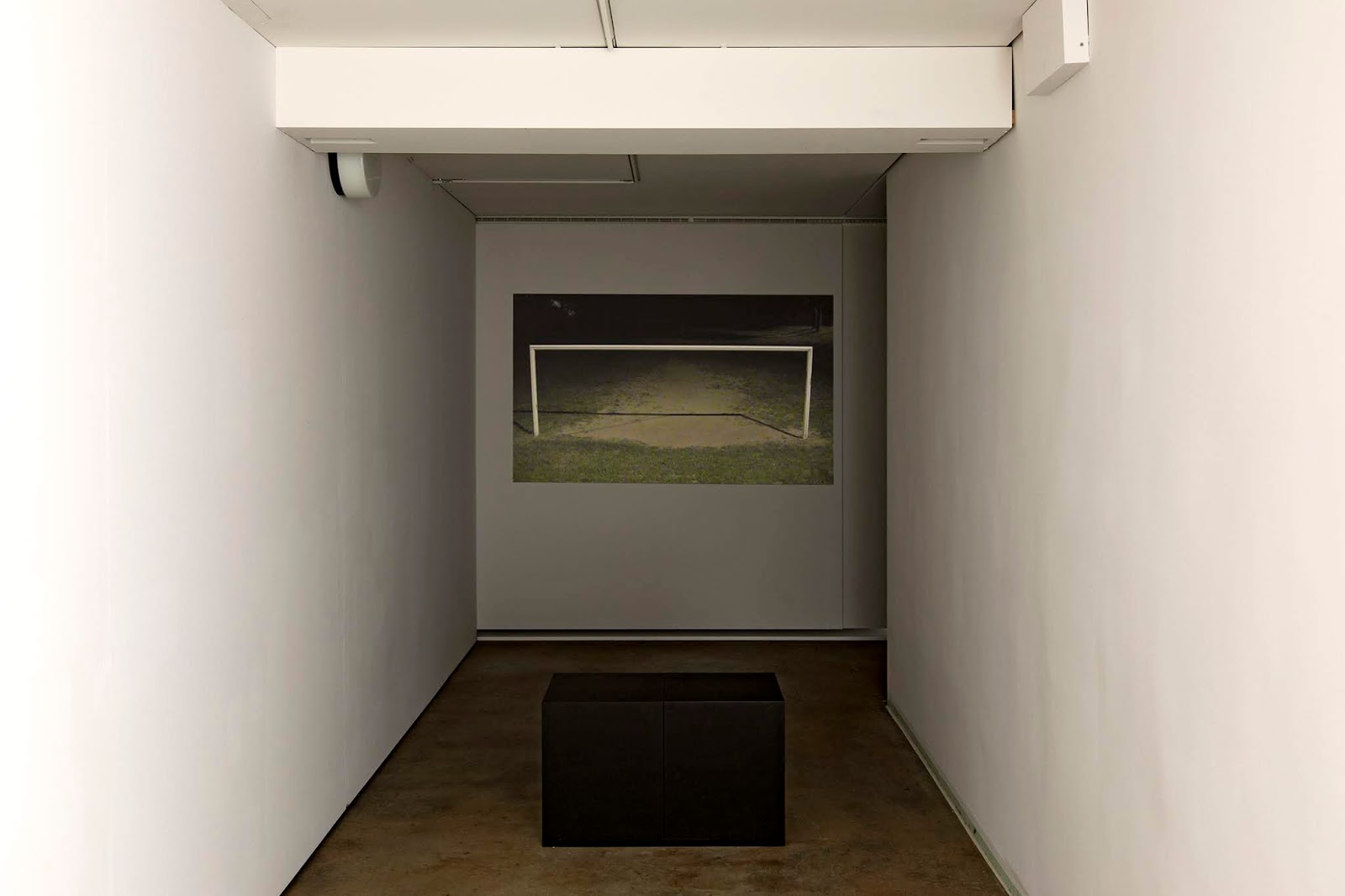 A perpetual motion is an apparently utopian construction, in which a movement comes into effect again and again on its own.

Arranged as a circuit the architecture in the basement of the Museum Folkwang guides visitors through the exhibition rooms in a cycle. The exhibition Perpetuum Mobile takes this structure as its starting point and reflects it as the potential for an endless movement. The artists react to this by consciously directing and moving the gaze of the viewers. While the eye scans sculptural works, it stops in front of photographs and follows moving images in videos. Although the artists of the exhibition operate with a variety of media they share a common interest especially in the process which leads to their works. Therefore, the exhibited works can be regarded as singular movements which are brought together here to a common one.

But it’s hard to tell which movement comes first. On the wall in the entrance, you can find a black charcoal floor plan on the white surface. Like every floor plan to an exhibition, it shows the view from above, the bird's eye view. Normally, it is supposed to serve as an orientation help, so that visitor keeps his/her bearings and doesn’t get lost. Unlike other floor plans, this one is not simply a square with lines and dots that mark the positions of the artworks but is an artwork itself by Irene Kastner. It serves as an introduction to the exhibition where the drawing not only shows all artistic positions but also reflects the display and the concept of the show itself. Before entering the exhibition, the visitors are being presented with a choice: Which direction is the correct one – left or right? Similar to Theseus, the founder-hero of Athens, who needed to find the right way in the labyrinth of Crete in order to kill the Minotaur, the visitors who enter the basement also need to make decisions to come further. While the example from the Greek mythology knows only one correct way, Perpetuum Mobile invites us to look at it from both directions in order to make different relationships between the works visible and thus to explore the heart of the exhibition. In this way, the visitors themselves become part of the perpetual motion as they walk through the different rooms and walk in circles.

The continuity of the loop reflects this idea in the medium of video perfectly. Same does the piece Sans s‘élever, une mélodie, acharnée aussi à ne pas céder tout à fait by Florentine Charon. For about five minutes you see two legs walking through bright green grass accompanied by a melodious humming and then the video starts all over again. The loop not only reflects the idea of the exhibition as an endless movement that generates itself, but also animates the viewer to follow the movements of the video and step into the next room. While the gaze still sticks to the picture, the legs move by themselves and throughout the whole exhibition the humming sticks inside your head. In the videos of Giacomo Cerlesi sound and image are created separately. For his work Combat de Ciel he shot footage of a baseball field in Japan and added a recording of the Apollo mission of NASA. Even though many associations may come up while thinking about the origins of the material, Cerlesi tries to escape the normative practice that image and sound need to belong together and plays with the actual ambiguity that lays in this combination. His videos never only tell one story but always create multitude form of narratives. Tristan Ulysses Hutgens doesn’t deal with storytelling but nevertheless his works show a similar interest in the ambivalence – not in the combination of sound and video but in the relationship between sculptures and the photographs of them. For his photo series O.T. he took pictures of different kinds of vases, developed the photos and then formed the prints into the shape of the pottery back. His works often reflect the translation from one medium into another and how this process changes the gaze. In the artistic practice of Esteban Neveu Ponce one can find a similar method: The exhibition features several works by him that were originally conceived as models. They not only refer to the work process on which they are based but also deal with elementary questions of sculpture. While Karyatide touches the ceiling, its predecessor is placed on a plinth. Similar to Constantin Brancusi's works, however, the plinth can no longer be clearly distinguished from the sculpture, but rather becomes a part of it itself and emphasizes the verticality. It is precisely this form of engagement between the works that has also led Moritz Karweick interests – even though it may not be visible at first sight: A piece of textile covers a steel construction. This doesn’t only happen in the sculptures cloud and small cloud, but also in Karweick's black and white photo series. However, the steel construction is never shown here in its entirety but only in lines that cannot be located. This abstraction dissolves as soon as one sees the sculpture next to the photos: Individual steel segments are joined together, so that the lines suddenly look like large windows through which one wants to pass. The works of Mathie Laborie also play with the desires of the visitors. In her sculptural works the movements that the artist has performed on the material still swing, so that you want to engage with the sculpture and feel the gestures. All works by Laborie are based on drawings she makes beforehand. While some are transformed into objects of colored plaster and cords, other gestures can only be experienced on paper. Paul Klee once said: “Drawing is taking a line for a walk.” This well-known quote can also be applied to the works of Malin Speicher. However, with the difference that her “walk” does not stop on a piece of paper. She draws in concrete or forms filigree lines of steel. The movements she makes seem to negate almost the material from which they are formed, or at least to attribute to it a lightness that was not visible before her intervention. In a certain way, Irene Kastner has also intervened in this exhibition: For her work in situ she adopted the architecture of a cross and poured plaster in the corners. Like small pedestals they now rise above the floor or engage with the room and step into it, like triangles, apparently imitating a pointing gesture. It is a similar movement that you can also find on the accompanying photographs of sculptures by Giovanni Pisano. Kastner installed the photos so that they point to the pedestals and vice versa. In the end, it is precisely this moment of mutuality, of pointing and referring that can be seen as the endless movement which connects all exhibited works and goes on and on and on and on...