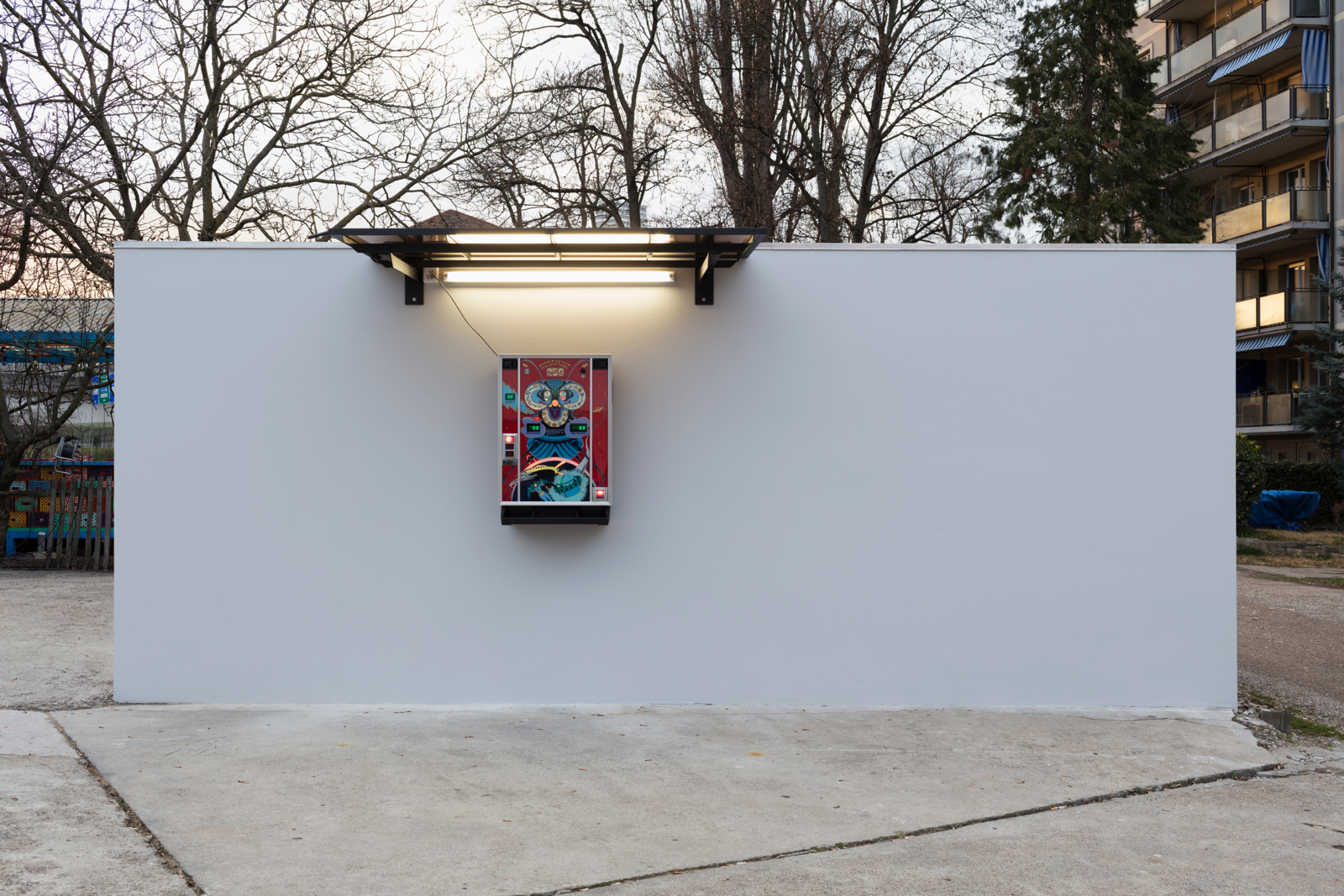 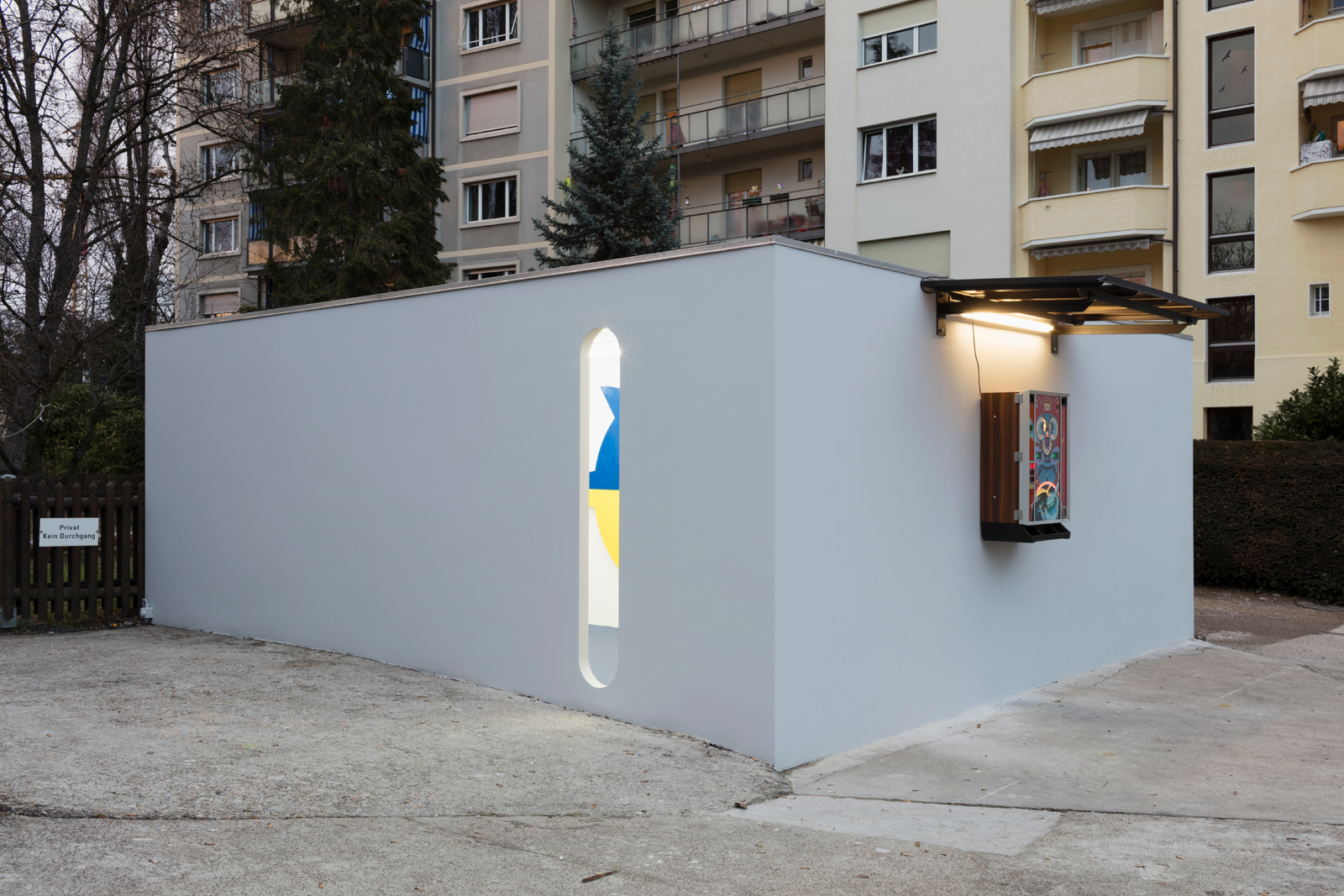 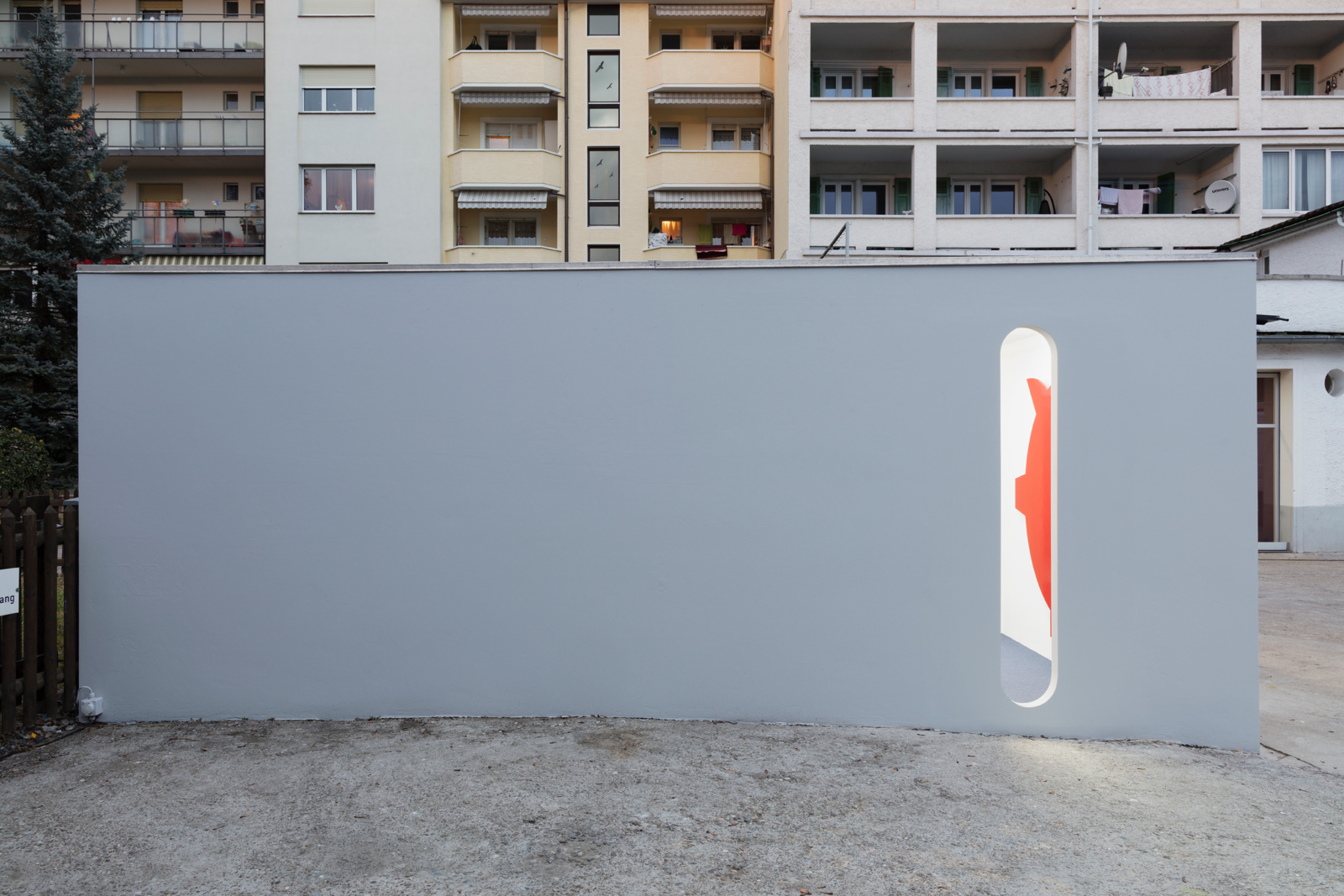 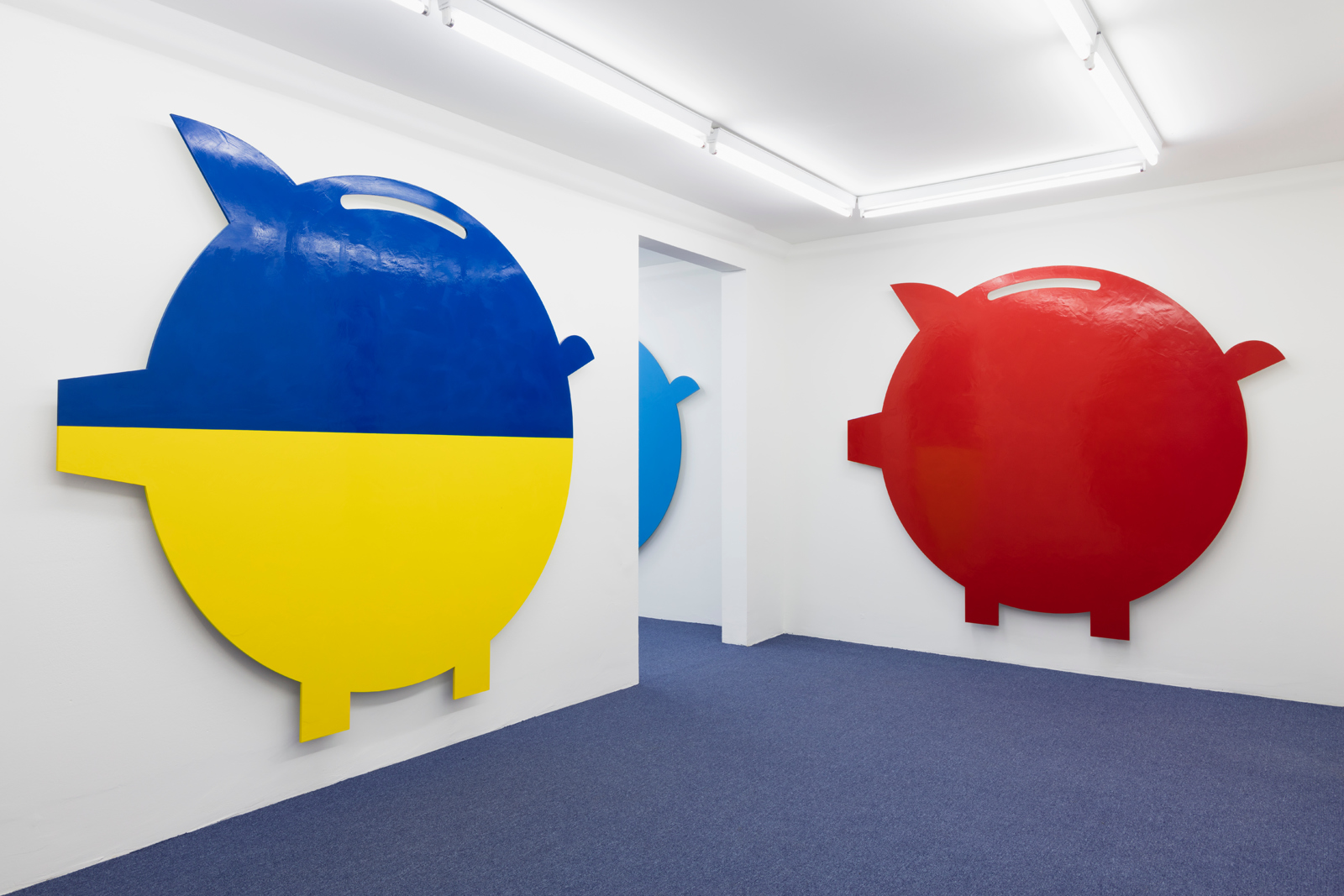 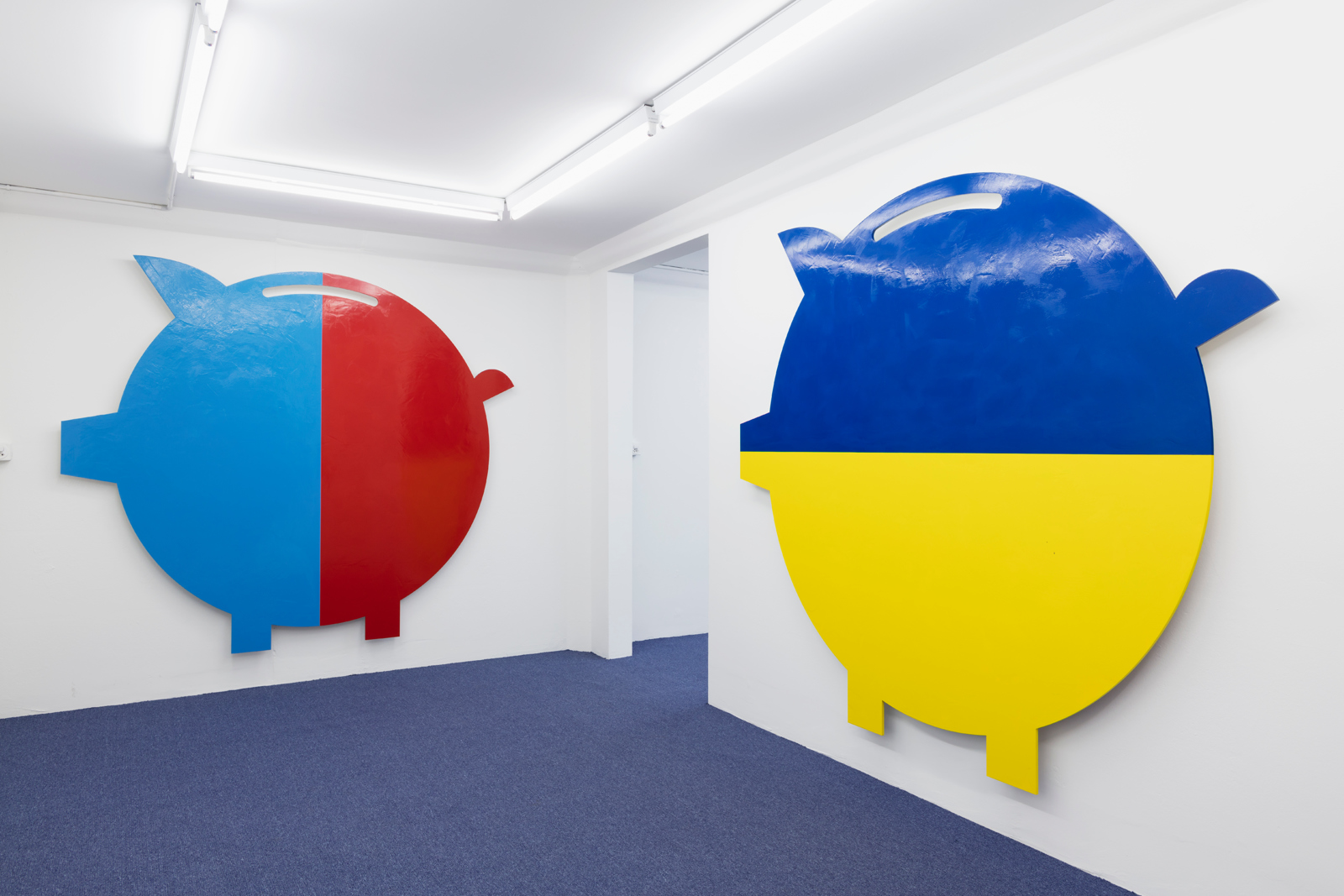 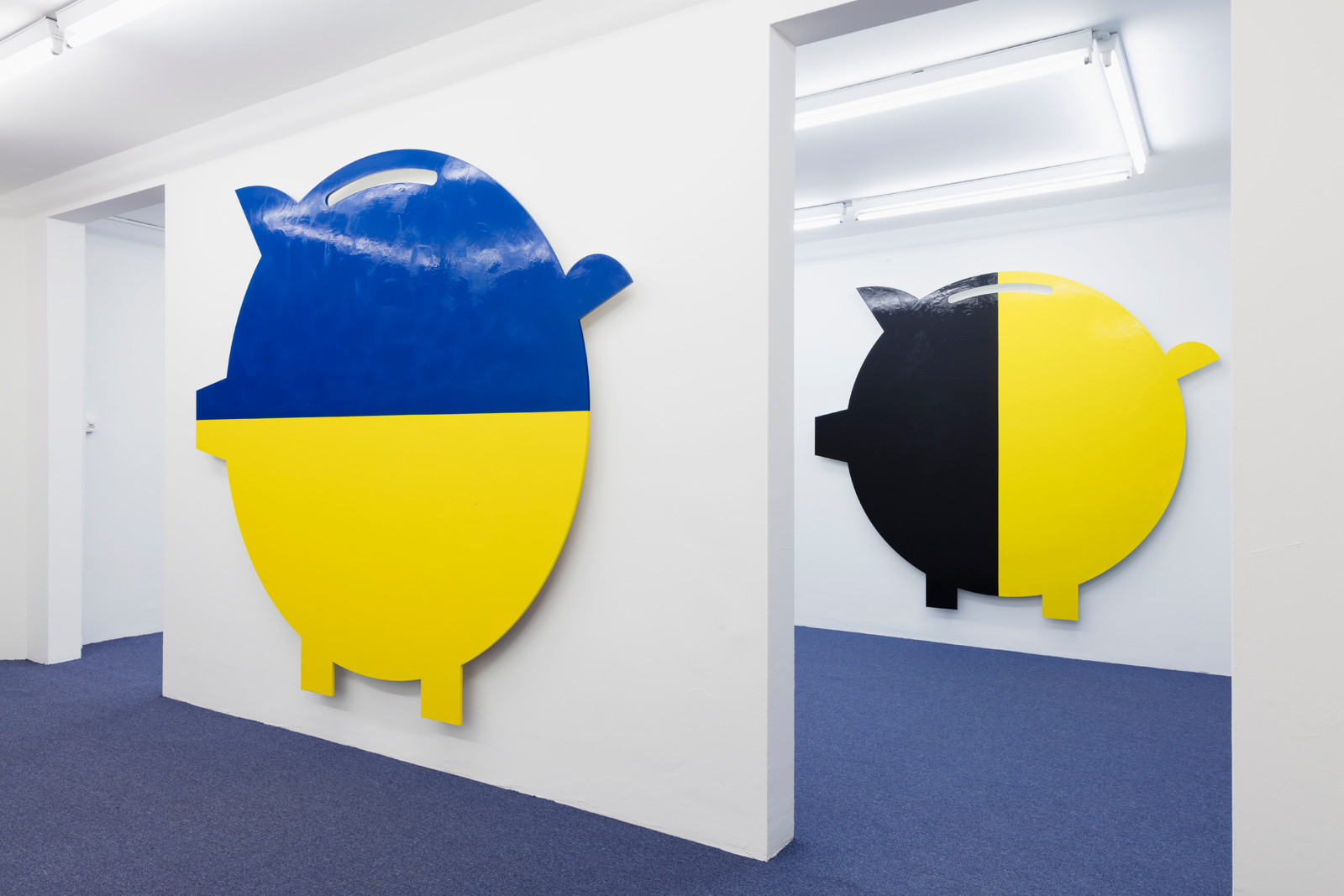 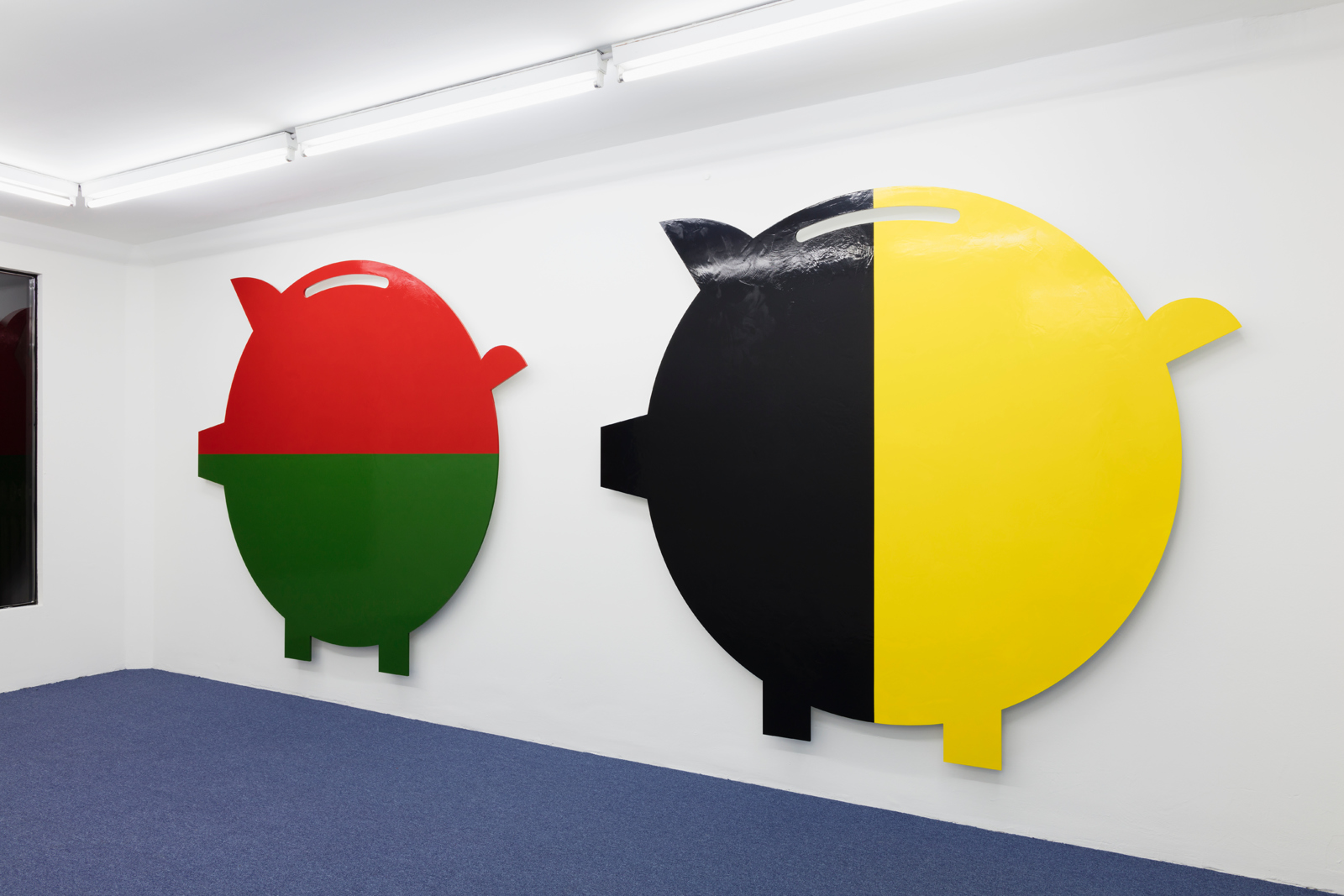 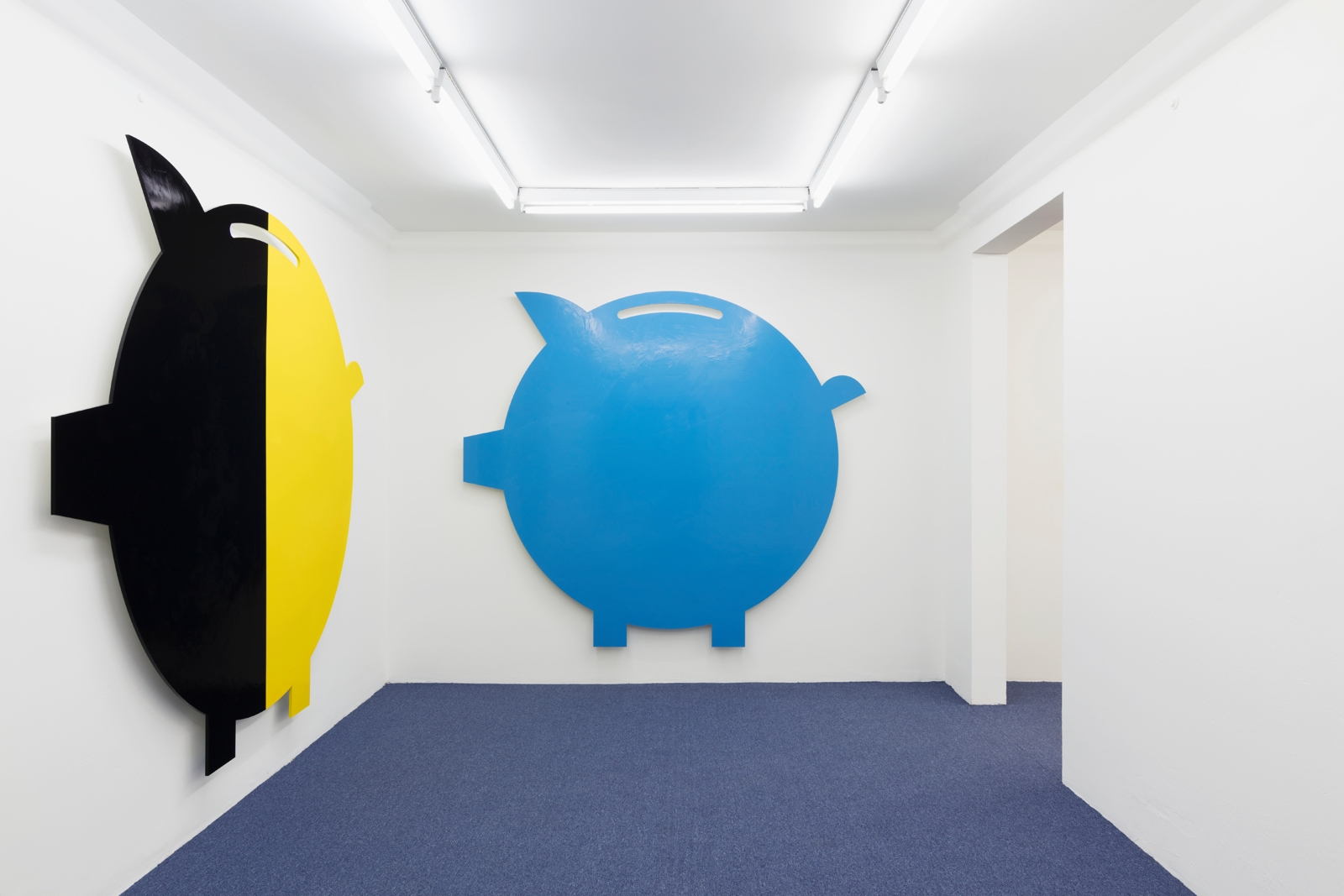 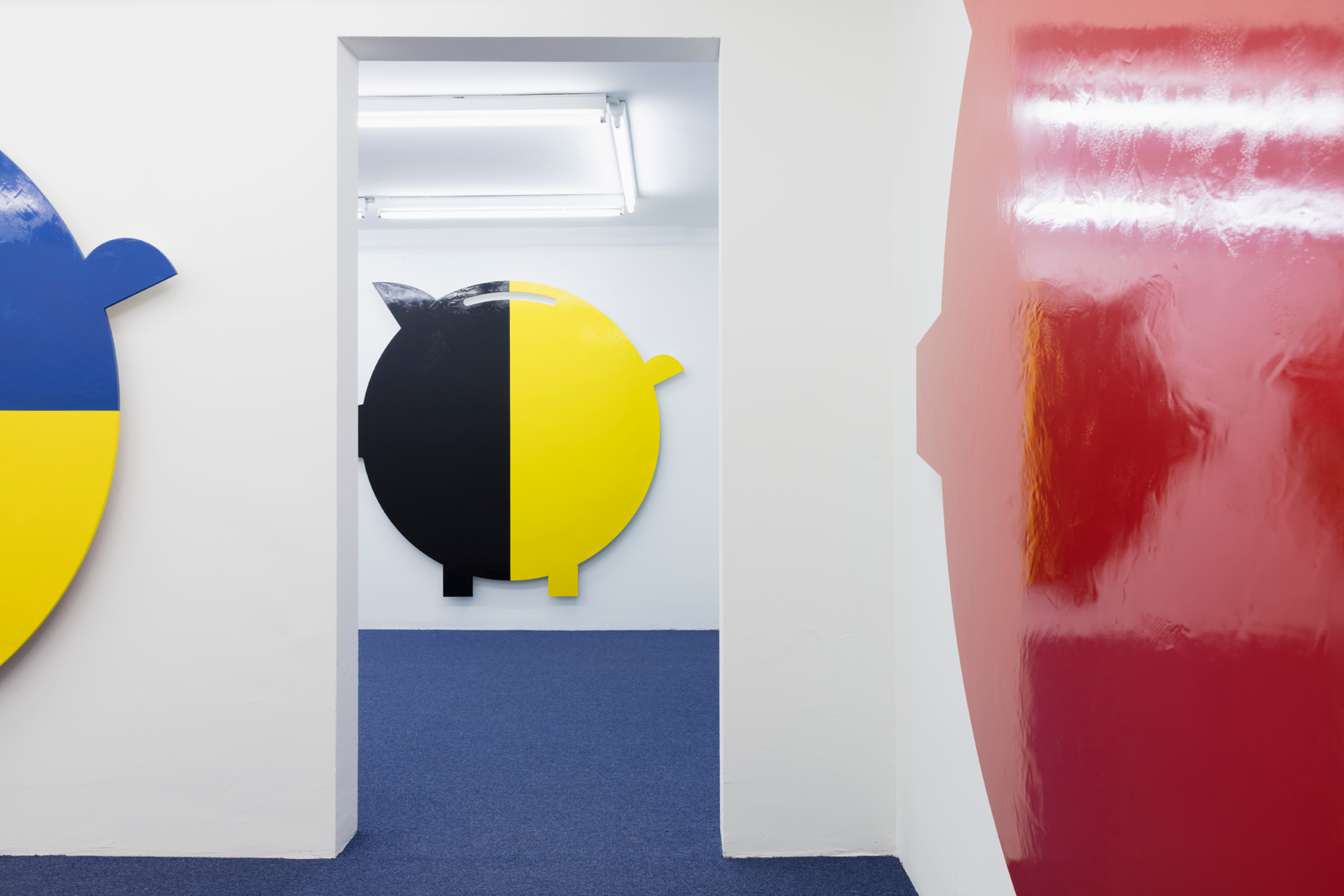 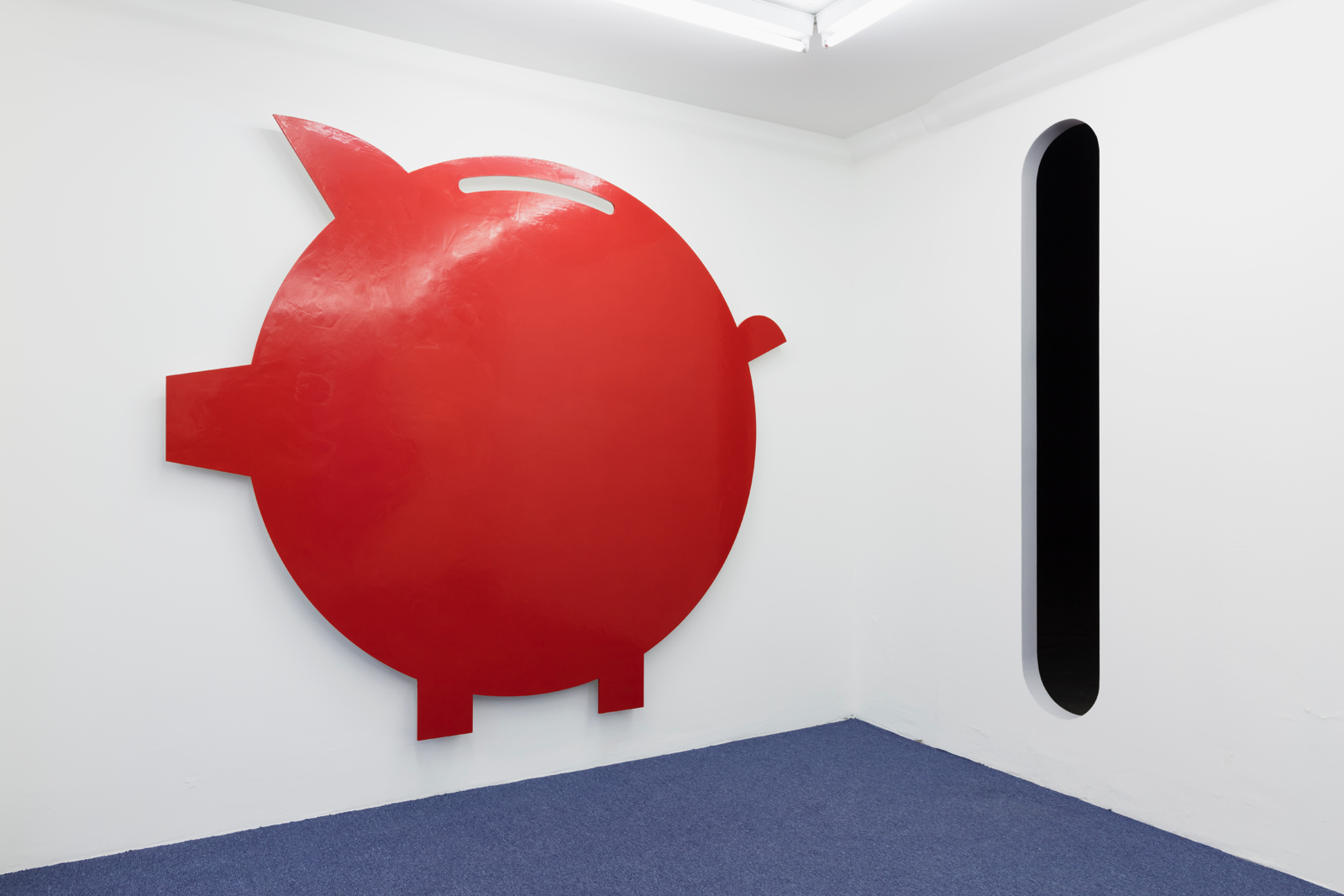 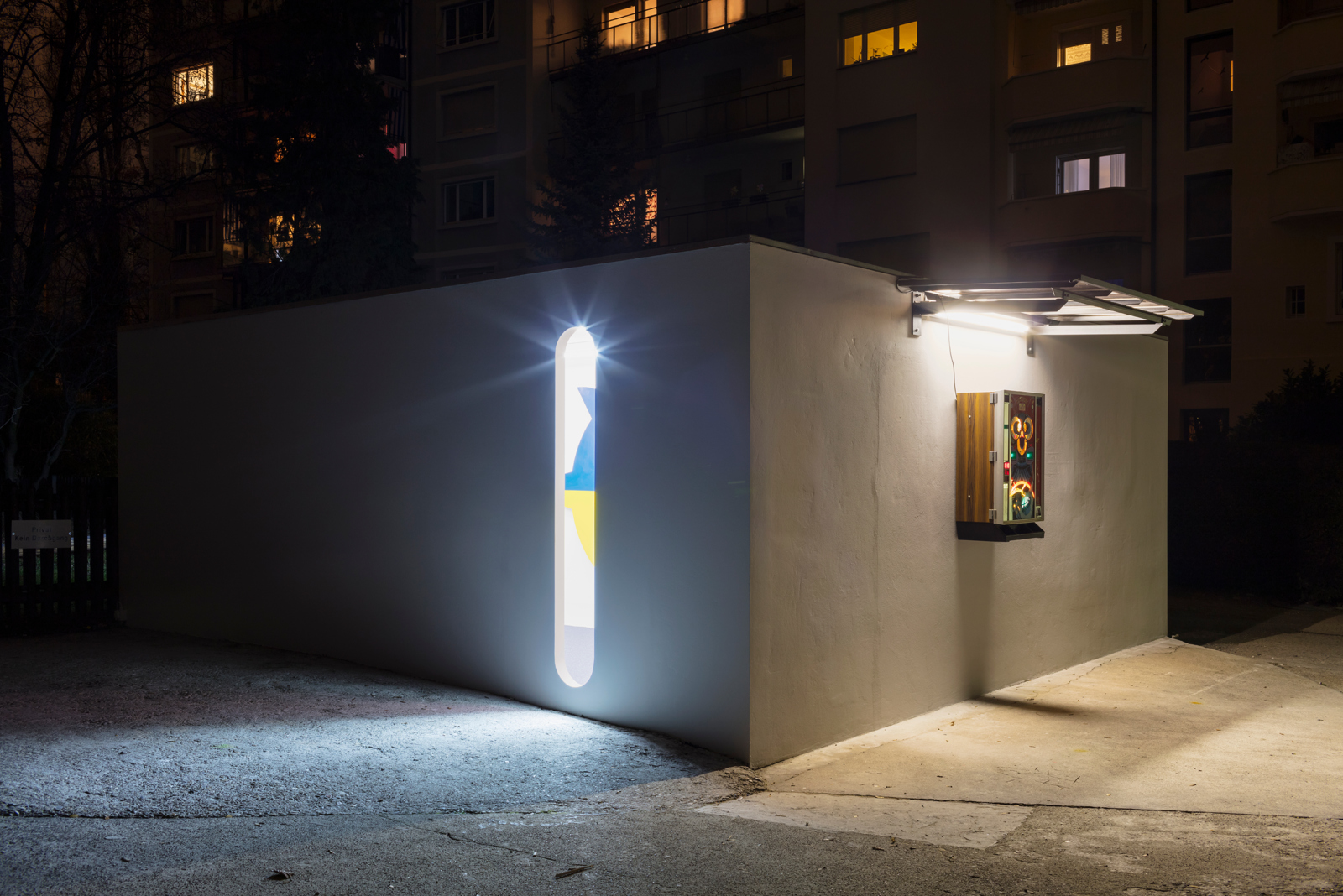 For his solo exhibition at SALTS, Jan Kiefer decided to embark on the exploration of the
psychological concept of greed, developing an entire new body of work. On the outer
walls hangs a vintage Rotamint slot machine produced by German NSM in the 1980s. The
particularity is that it only accepts Swiss Franc coins, suggesting the machine was originally
used in a national casino; the only place in the country where gambling is legal since
1933.
The gaming device is sheltered under a roof made with a 1.67 mm copper sheet, which is
the exact thickness of a 1-cent Euro coin. The space can be entered through a slot door,
whose narrowness seeks to obstruct passage. When able to make their way in, the viewer
enters a carpeted space, where a series of large-scale and bi-colour paintings are hung.
The six works, each shaped after the generic silhouette of a piggy bank, are handlacquered
with a combination of elementary colours characteristic of national flag
designs.
Once combined and re-contextualized, mundane objects such as piggy banks and gambling
machines form a corpus that allows the artist to address more complex aspects of
contemporary life.
In a precise methodology which consists in highlighting phenomena usually associated
to popular culture, the artist proposes to question, from a sociological point of view, our
relationship to money, and more particularly the human tendency to accumulate goods
beyond need.
Humans distinguish themselves from animals through their ability to understand that
they’re alive and therefore mortal. In most religious or philosophical systems, this consciousness
is often accompanied by a persistent longing for immortality, which also
seems to be a side-effect of the neo-liberal venture. Youth and wealth, expressed through
vanity and greed, are the modern cults that govern the individual, often at the expense of
others.
Emphasising the paradoxical nature of gambling, Kiefer encourages visitors to play slots
with Sekt und Selters (2017), a machine originally conceived with low chances of winning.
The popularity of wagering for money has often been associated with narcissism, insofar
as the prospect of gain is more rewarding than gain itself. According to many countries
where money games are regulated, the addiction-inducing aspect is what led governments
to limit and tax them. However the statistical odds make legal gambling a very safe
and stable income for whoever controls it.
A bold yet minimal gesture, a human-size slit now serves as the only entrance to the
space. A discriminating access that seeks to highlight the aleatory and often biased aspect
of money speculation, both in the corporate and entertainment worlds. Once slotted
in, the slim body is commodified, ready to play (and be played with) in a gigantic money
box.
Inside, the generic light-blue carpet and pseudo-flags both function as abstract evidences
of a decaying global economy. Reminders of the ever-carpeted, bright-lit multinational
lobbies, these vaguely corporate artefacts were purposefully stripped off their usual signifiers;
here flags no longer stand for a specific geography, but only as pure evocations of
nameless struggles and nationalisms.
Applied on piggy-bank shaped paintings, the geometric compositions not only suggest
the de-territorialization and de-materilization of the economy, but also the rise of the artist
as entrepreneur. Yet each brush stroke has been made visible, thus evidencing the artist’s
presence, and ultimately, Kiefer’s coarse comment of the current economic system.