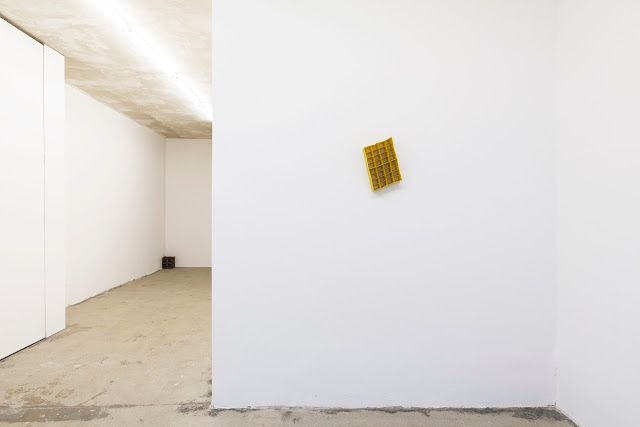 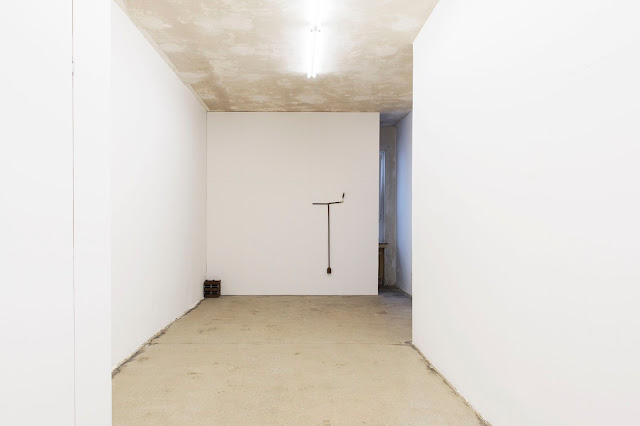 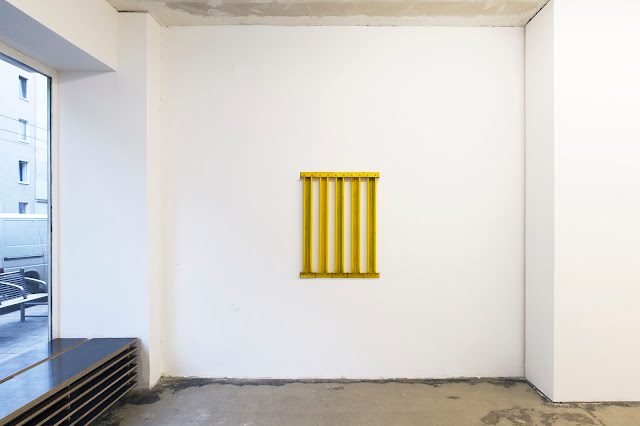 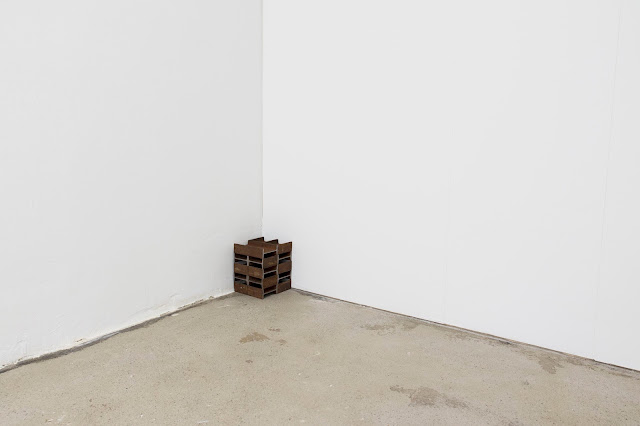 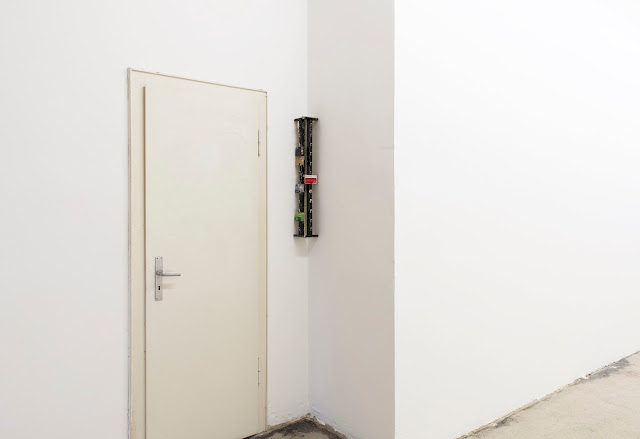 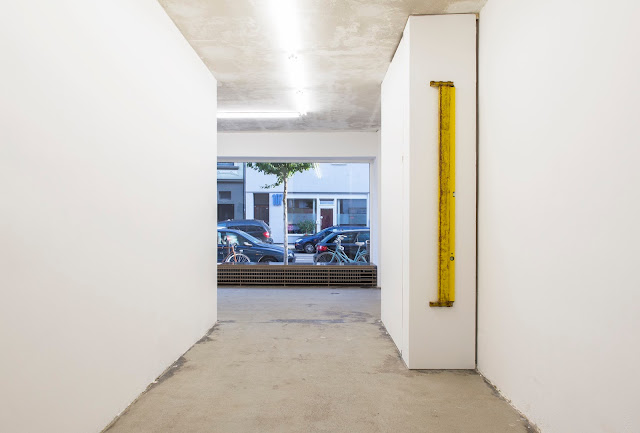 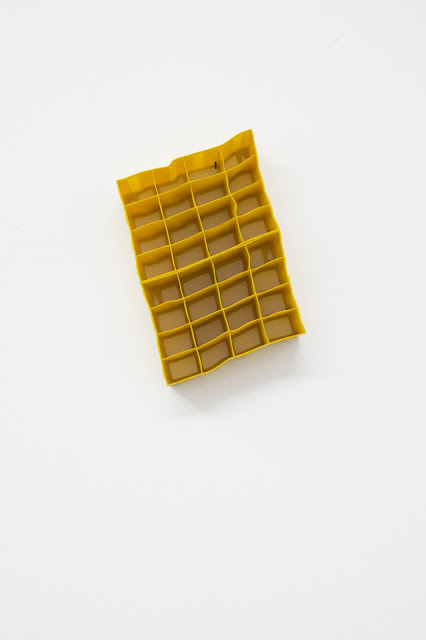 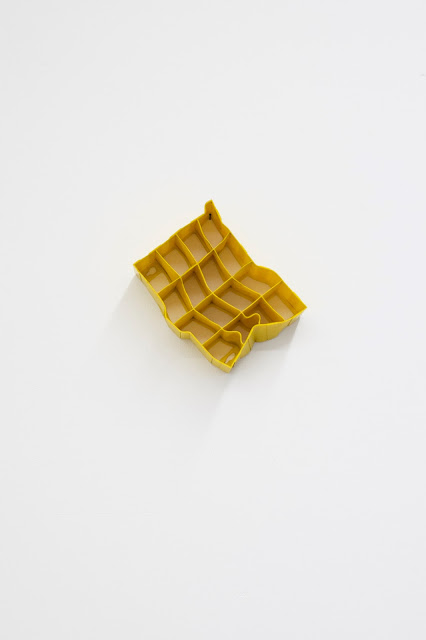 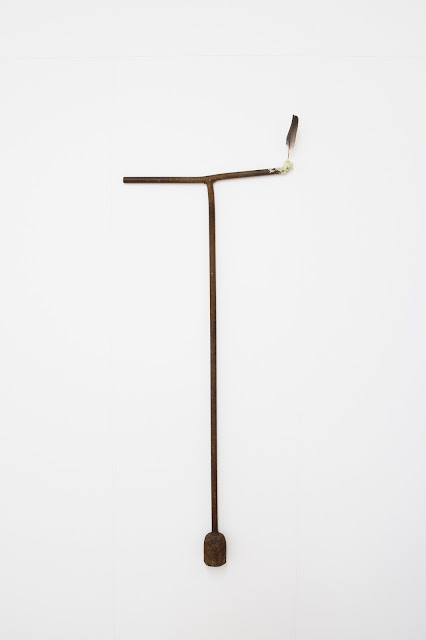 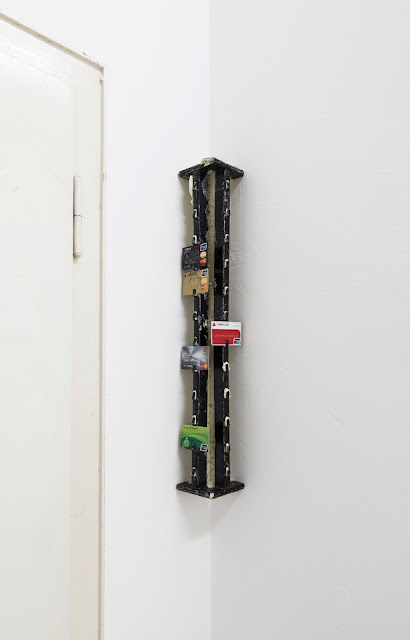 Ossegem, Molenbeek. On the periphery of a furniture store’s backyard,
between a train station and a shopping street, lives Sisyphus. His heart
is filled with love that is not reciprocated. His love reveres past times.
He is trapped in a dysfunctional system that lacks time, lacks income,
lacks mobility.
In the process of installing an exhibition in a church in Strasbourg,
Lukas Müller was forbidden to exhibit a wallet of a Chinese tourist,
which included the credit cards that he found – presumably previously
stolen by others. This occurrence enrages Müller. In his current
exhibition, with Lucas Hirsch, these credit cards can be found again
as part of a wall-piece.
In passing, Müller detaches his collected pieces from their location.
He picks them up from the street, strips them from their urban
functional relation, transforms them with minimal interventions: cuts,
deforms, attaches, spray paints, rearranges, and puts them into a new
context where they exist thrown back into themselves. His objects are
naked; they seem to repel any further signification.
This is the condition in which Lukas Müller finds himself in, both
when his doubts became the point of departure for his earlier works
and when he identifies with the immobility experienced by those living
on the margin in his current practise. While he previously, obsessively
collected slips of paper, fleeting notes of the disregarded, private
fragments of social realities, he now adds physical weight to the work
as a formal quality. When strolling through the urban landscape his
attention is casted upon metal objects that convey support through
their sheer weight.
Lukas Müller’s acts of collecting, picking-up, carrying away, ensue
an awareness that is aimed at the marginalized. These works preserve
their singularity and disrupt “The Way Things Go”. Some of his
findings are not ownerless. His gestures stem from the lack of means
thus becoming theft. His sense of non-possession, non-ability,
non-existence is expressed through audacity. „Out of defiance he
became what everybody thought he was“ (Jean Genet, The Thief’s
Journal)
Text: Friedemann Heckel