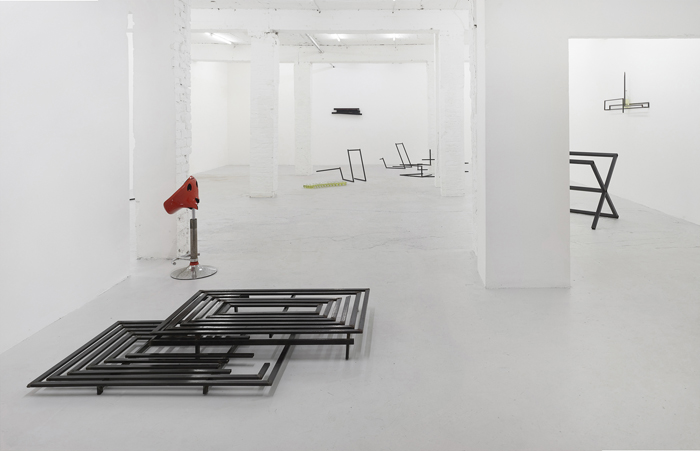 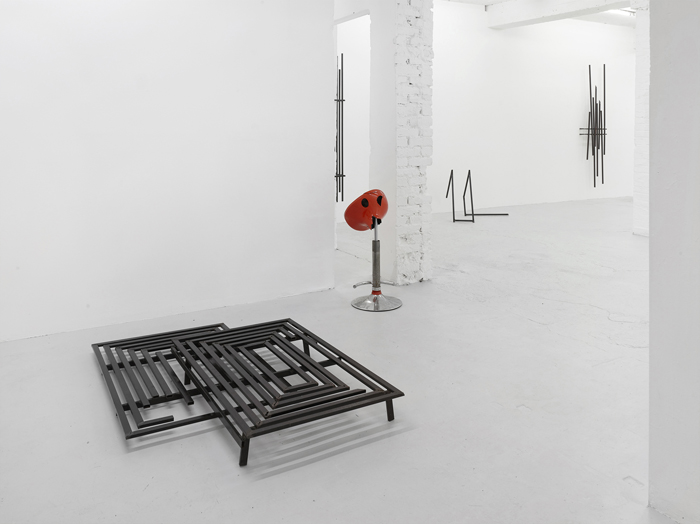 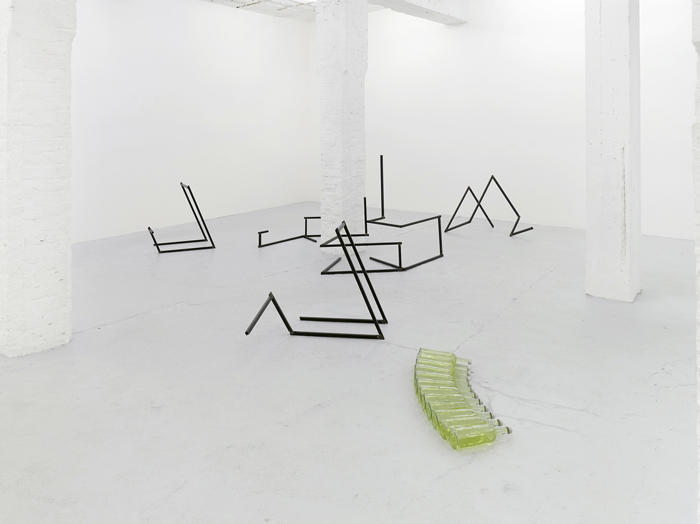 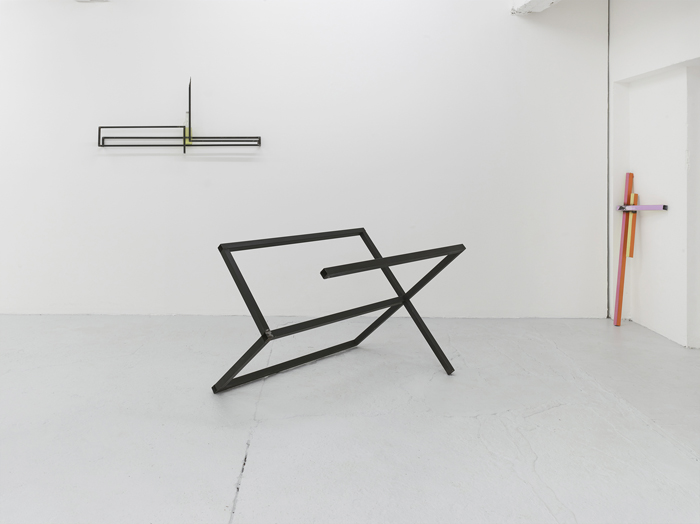 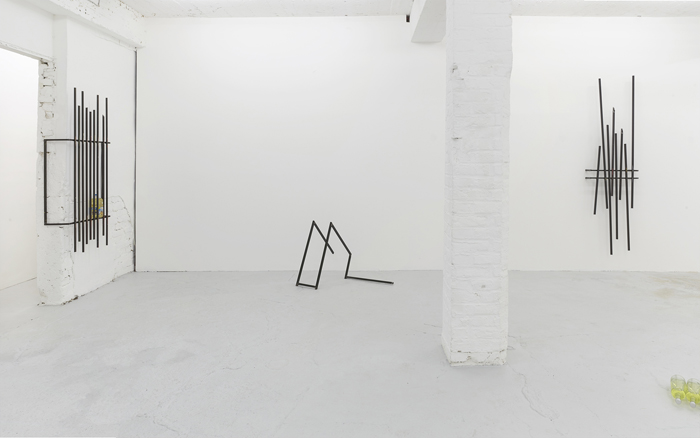 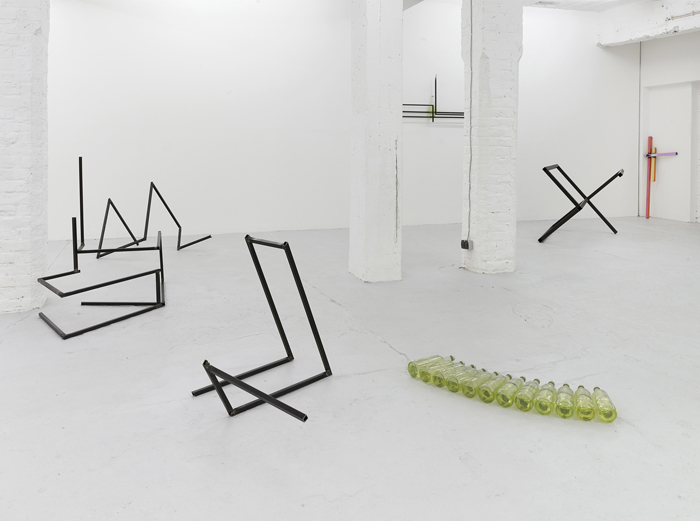 The German term ‚Kommune’ (commune) has been heavily charged with the militant spirit of protest movements particularly since 1968 and beyond. It is also used as an administrative term for territorial divisions. Combine it like the artist Marcel Hiller does in his exhibition title with the name ‘Brölio’ – a regular brand of vegetable oil – and it all sounds like the nonsense album title of some German punk band. Like within other bands of the genre that have not succumbed to mindless drunkenness or their own fatigued loops of social critique, one might sense some twisted profundity behind the deceptive silliness on display.
What does it mean if Marcel Hiller raises ordinary vegetable oil like the German ‘Brölio’ brand to icon status by using its name for his exhibition title? Despite the product’s essential role in our daily lives its role as nutrient as much as ingredient remains unglamorous and arguably humble. Yet its status changes as soon as it is displaced into the exhibition space, where it becomes the object of all sorts of projected associations: the realms of consumption and commodity, sustainable and renewable, local and organic, and of food scandals, cholesterol tables and the beach body…
The things surrounding us form the essential elements of Hiller’s practice, as much as the systems that structure our lives. It is a practice nurtured by the keen dissection of its environment and whatever it constitutes.
The term ‘commune’ in its use as an administrative unit that sections off cohabitation geographically, or as a social experiment of the 1960s and its radicalised arguments revolving around the ideologically correct organisation of living together, suddenly seem not that far removed from Hiller’s artistic questions and research anymore. Just like humble vegetable frying oil in times of fancy nutritional fads, the ambitious 1960s commune model has gone out of fashion in the meantime. The opposing camps have found comfortable rest in mutual truce whilst other more pressing issues have pushed ahead. There is the internet, social media, climate change and globalisation. And one just cannot quite shake off the feeling to have met these pesterers before.
The questions, however, remain the same. How do we want to live? And more importantly: How long can we keep this chaotic global mess cooking on for before it all boils over? Could we imagine a critique being more than a service provider that keeps vital functions of the status quo alive?
Hiller’s mysterious response to those questions is an installation of steel parts, common household objects, desolate furniture and apparent trash. It depicts the post-apocalypse as a multitude – reminding us of places that may have once had a purposes, or perhaps only will again one day. Those familiar objects appear dry and brittle like erratic memories of structural processes, which Hiller casts as improvising actors in his staged scenarios. If it is the conception of a possible future that we are witnessing here, then how does it reveal itself to us? It becomes a scene –like lifted from a Hieronymos Bosch painting or a random hodgepodge of obsolete tad. Whilst admittedly sobering, the conclusion one arrives at is crisis-proof at least: Everything we labour for, all we invent, build and manufacture will one day land on the scrap yards of the future.
With that perspective in mind it is perhaps the notion of time itself we can witness in Hiller’s ‘Kommune Brölio’. A state of mind that only exists like this, only here and only now, like so many others: materialised as a fictional place and physical exhibition alike for a specified duration, to enable a closer look at the dissonances in the modules of ideologies of our present age.
Marcel Hiller (1982, Potsdam/Germany) studied at the Kunstakademie Münster, at Geneva University of Arts and Design and has been a fellow at the postgraduate program of Jan Van Eyck Academy, Maastricht. His work has been shown in solo and group exhibitions at Extra City Antwerp, Kunstverein Nürnberg, Bonnefantenmuseum Maastricht, MuHKA Antwerp, the GAK Gesellschaft für Aktuelle Kunst Bremen, the Kunsthaus NRW, Kornelimünster, Kunsthalle Bremerhaven, mumok Museum für Moderne Kunst/Vienna and Ludwig Forum/Aachen amongst others.
Text: Nelly GawellekTranslation: Marcus Kleinfeld