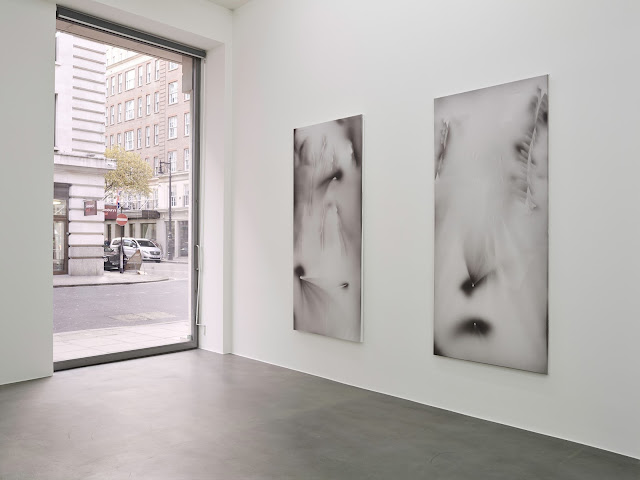 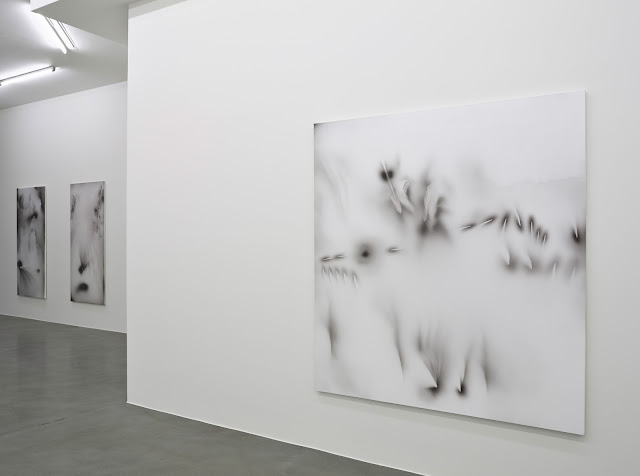 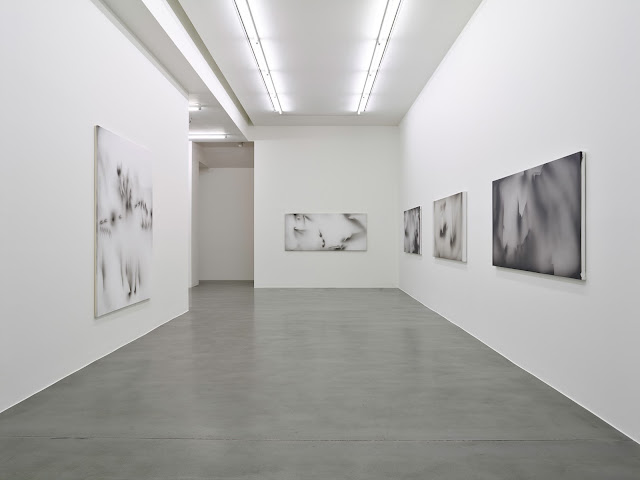 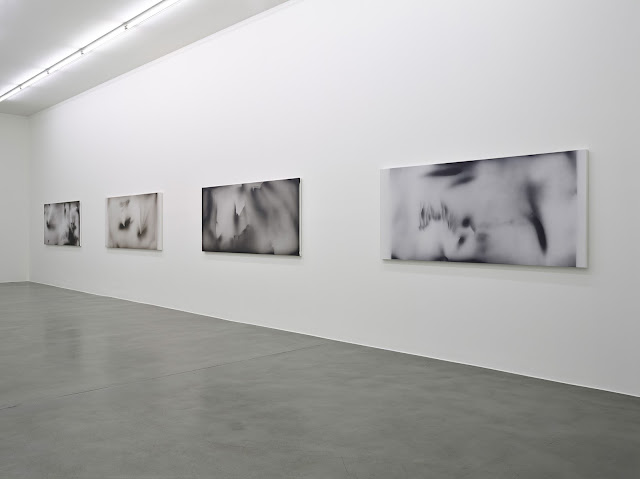 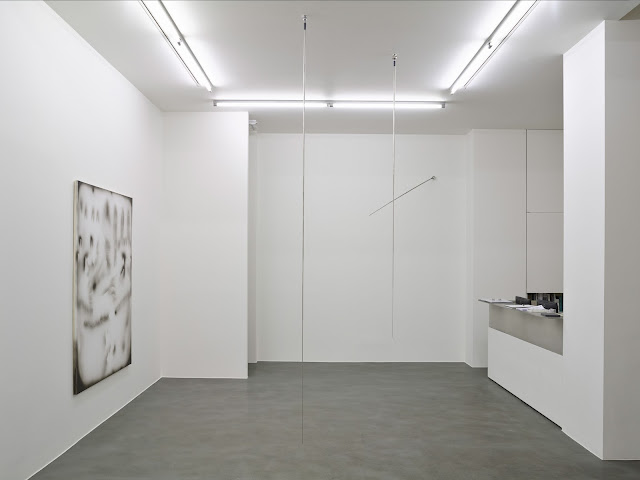 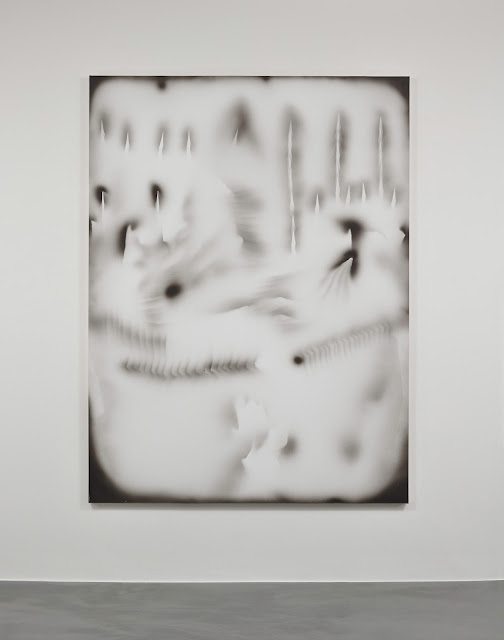 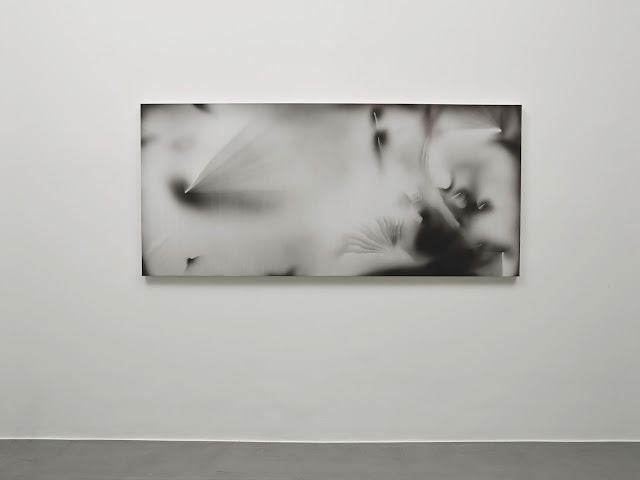 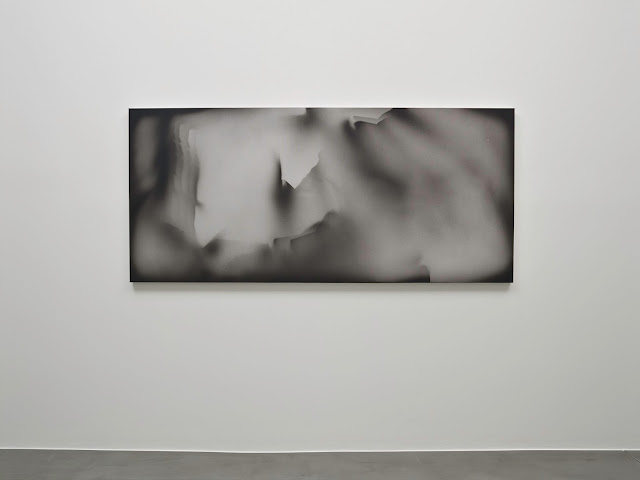 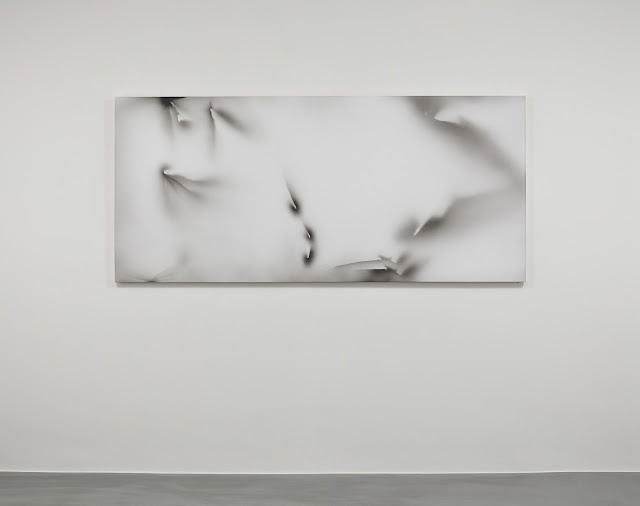 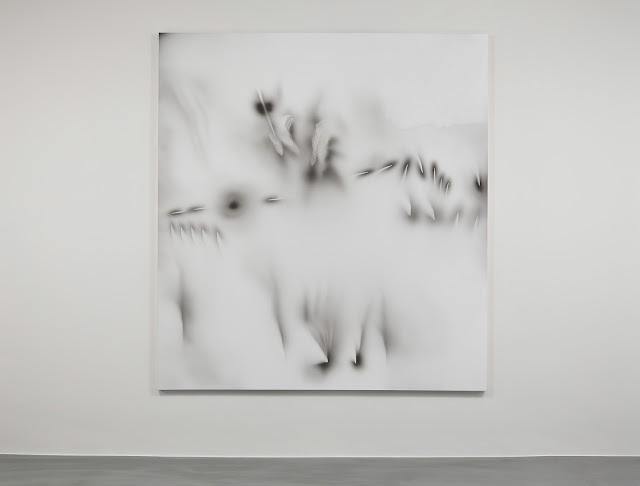 Zilm’s multimedia practice investigates the slippage between technological platforms and ways they are consumed and decoded in the social realm. His best known ‘film’ paintings take as their startin g point the physical properties of film stock and cinema as a material medium. Like the Structural filmmakers of the 1960s, Zilm emphasizes the materiality of film and its apparatus. For over a decade the artist has sourced 8mm, 16mm and 35mm black and whi te films for this ongoing project. Using a homemade bath, he chemically destabilizes the emulsion so that he can extract the filmic image and optical sound track from the reels of celluloid. The film, once fully extracted and finally in a liquid state, is then transcribed in its entirety onto a single canvas.

Each canvas is prepared with an undercoat of screen paint, the kind used by home movie enthusiasts, so that the support itself is literally a screen onto which the painting is materially ‘projected’; this material collapse of image, time, sound and narrative onto a fixed canvas-as-screen becomes a kind of ‘terminal projection’ of the film, a ‘petrified cinema’.

The exhibition SOME SCREEN MODS features a series of new film paintings (all 2016) derived from movies dating back to1919 - from comedies such as The Blacksmith to Fritz Lang’s Dr. Mabuse the Gambler. The extreme aspect ratios of thecanvases are also based on mid-century wide screen formats such as Cinerama and Todd-AO. Each painting consists of abstract/semi-abstract, spectral, monochromatic forms, simultaneously re-engaging early 20th Century black and white cinema and the tradition of the Modernist monochrome. Recalling X-Rays, Rayographs and other technical images, this new work triggers the latent tendency toward pareidolia, the psychological condition of finding figurative images in abstract forms. It also asserts one possible recalibration of painting toward an emerging way of seeing. Viewers, in an act of seeing that mimics current facial recognition software, begin to assemble a complex web of spectral figures and formal relations.

Zilm’s dynamic mark making often performs the setup and movement of the cinematic shot; close-up, pan, medium shot, tracking shot, reverse angle, zoom-out. The resulting marks and granular remnants further enforce this impression of the paintings being mysteriously active, of momentarily containing an-other, as they appear to glow, thrum and mutate. Space, complex, ambiguous and contradictory, is ‘holey’, rather than smooth or striated and Zilm’s ghostly forms and  voids loom and dissolve in and out of focus. The atomized, airbrushed application of paint allows for a range of granularity that evokes the material condition of film.

Directly engaged with the ubiquitous presence of the screen in both private and public realms, the evolving role of painting and the technical image, Zilm’s paintings seek to express another kind of relation of the analogue to digital – of subject to object, data to facta.  Also included in the exhibition are three new silver sculptures (all Untitled, 2016). Suspended from the ceiling and recalling analogue television or radio antennas, these telescopic appendages summon the
desire to receive and transmit, to communicate. Zilm reminds us of the nature of perception and interaction, of how we experience ideas and information and how we project our own narratives and realities. Knowingly drawing on these multiple histories, positions and relations, both materially and conceptually, Zilm seeks to pose some provocative questions regarding the evolving role of art in the society of control.