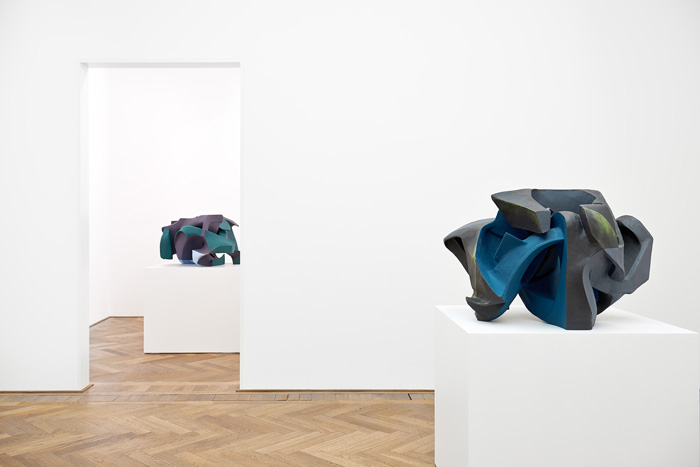 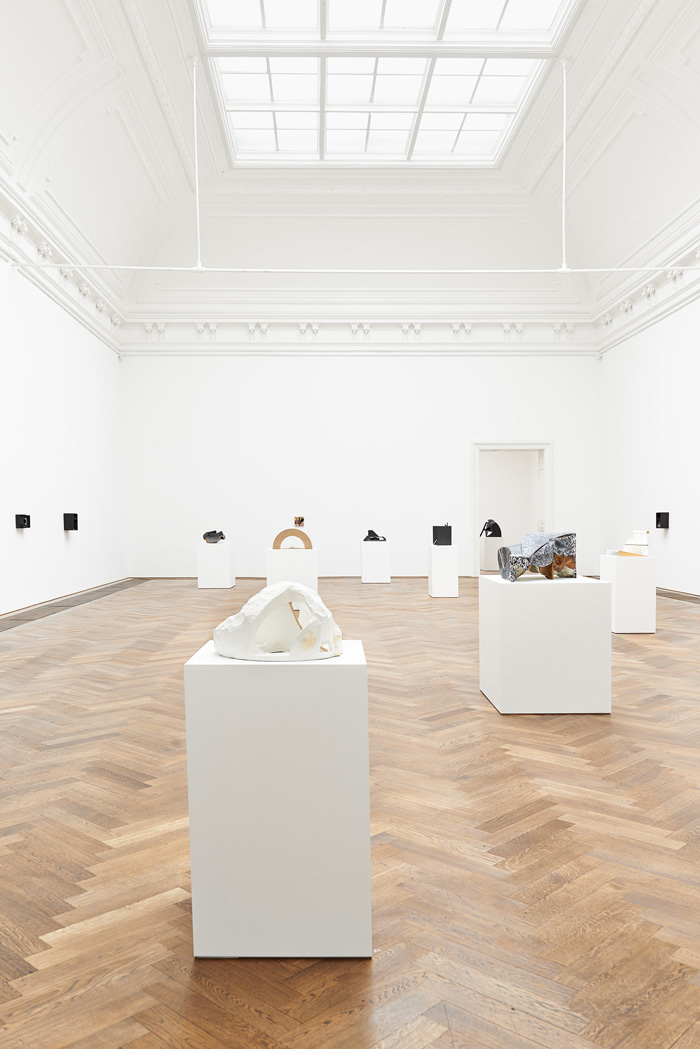 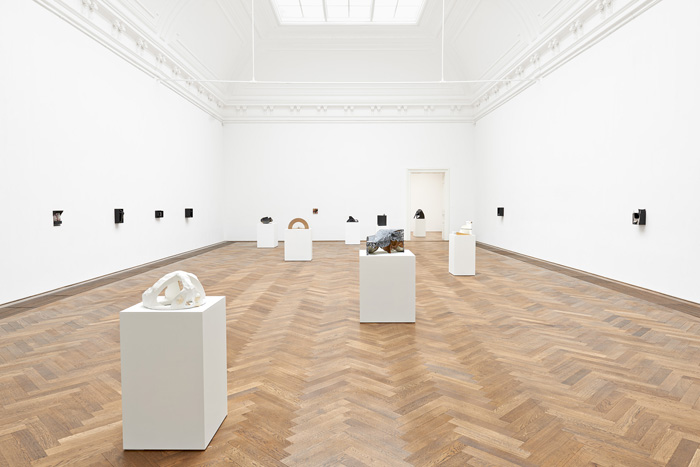 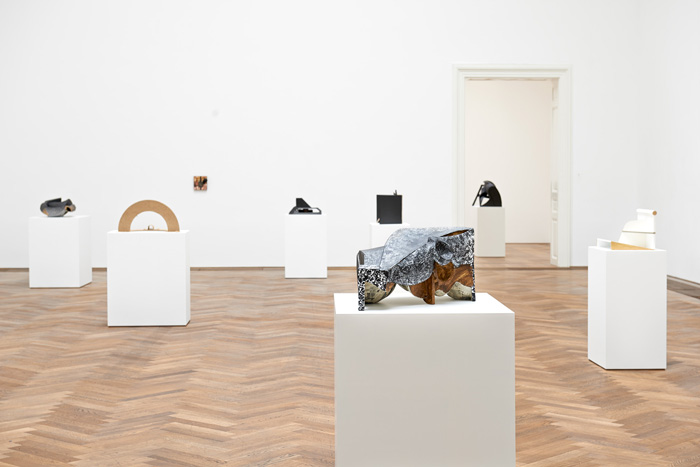 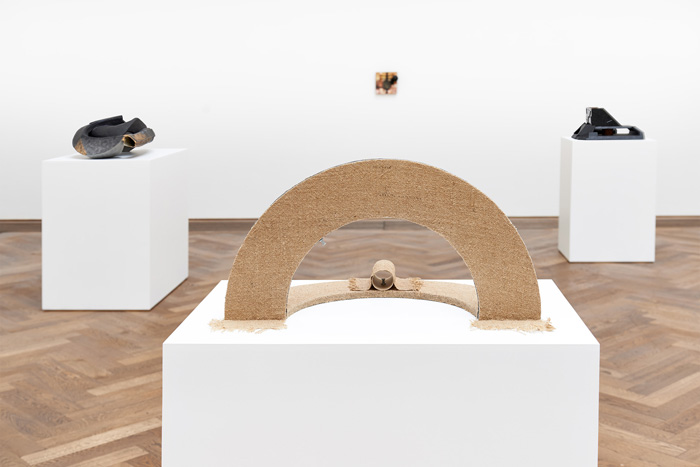 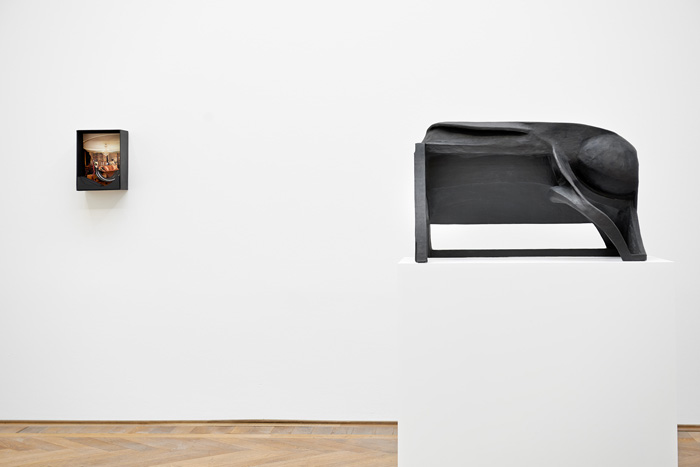 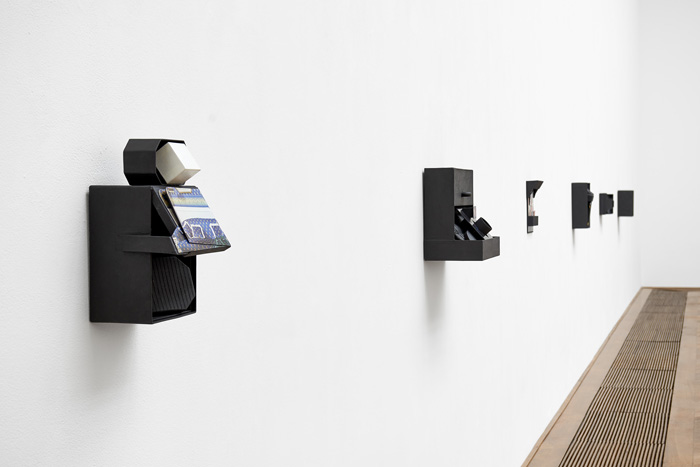 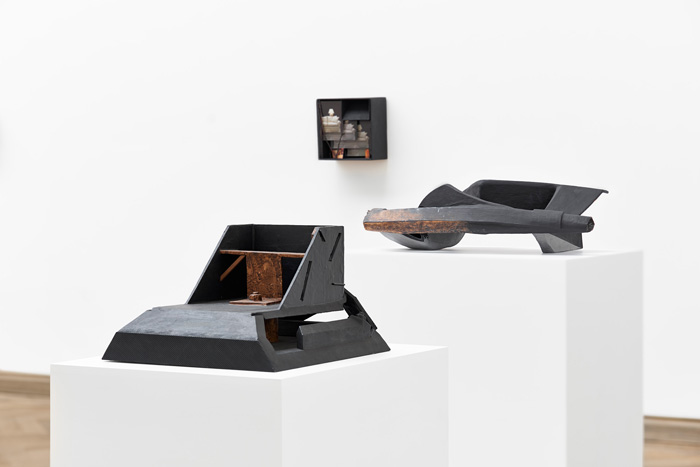 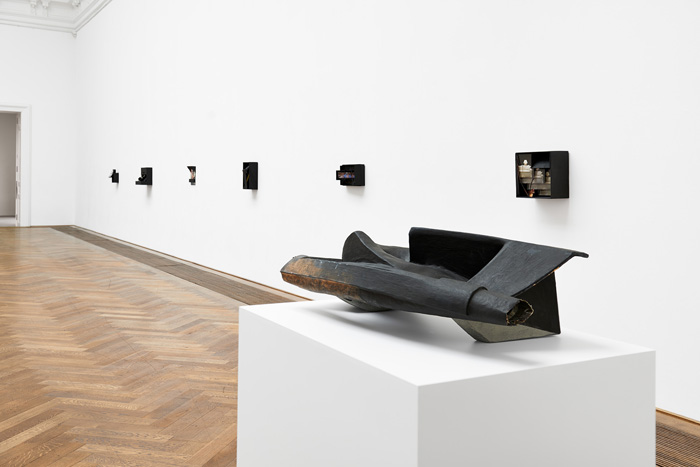 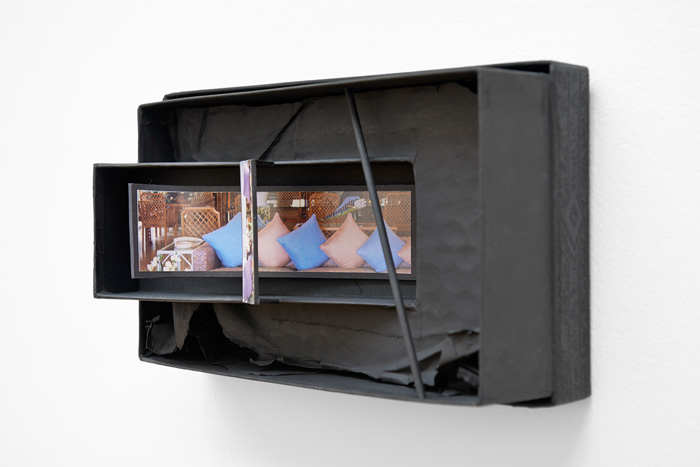 Vincent Fecteau, Untitled, 2015 in You Have Did the Right Thing When You Put That
Skylight In, Kunsthalle Basel, 2015
Courtesy Galerie Buchholz, greengrassi, Matthew Marks Gallery 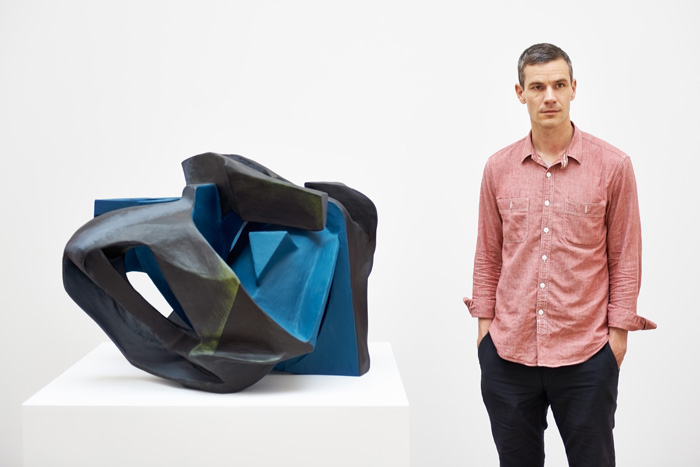 Vincent Fecteau, Installation views, You Have Did the Right Thing When You Put That
Skylight In, Kunsthalle Basel, 2015
Photo: Philipp Hänger

Vincent Fecteau has, over the last two decades, forged a singular aesthetic that mixes homespun materials (popsicle sticks, champagne corks, string, and the like), meticulous craftwork, and a curious formal grammar. By turns wonky, erotic, extraterrestrial, or baroque—and sometimes, paradoxically, all of these at once—his sculptures are built from small, slow accumulations in which layering, texture, and the work of the hand are all visible. Rigid geometries and the heft of the modern-ist sculpture that his work evokes are forfeited in favor of something far more modest, wildly irrational, and psychically charged.
The San Francisco–based artist’s sculptural practice is rooted in his early work, in which his fascination with images from cat calendars, the architecture of Neverland Ranch, and the mysterious charge of rooms pictured in home decor magazines formed the basis of decidedly quirky three-dimen-sional collages. These eventually gave way to sculptures in which papier-mâché aggregates of undulating curves, protruding appendages, and architectural planes are delicately wrought and then speckled like quails’ eggs or awash with odd colors that are sometimes muted, sometimes psychedelic. In these, as in all his works, there is a palpable dissonance between the works’ scale and the larger-than-life psychic space they take up.
Rarely does a review of Fecteau’s work fail to say what his works recall: miniature skate-board ramps, avant-garde stage sets, mis-shapen toys, Jean Arp sculptures, models for utopian architectural edifices—the list is long. And the critics are not misguided. But their insistent grasping for resemblances to known and describable things is indicative of how forcefully Fecteau’s works beg the viewer to recognize something in them, all the while eschewing anything like a neat resolve of the mystery of what they really are or could possibly represent.
That the works thwart easy description, and that even the most inventive of writers is often at a loss for words, speaks to the bracingly elusive and allusive qualities at the heart of Fecteau’s practice. And, as when one sees the face of God in a cloud or in tea leaves, recognition here perhaps reveals as much about the viewer as it does about the work. Fecteau’s sculptures almost whisper this in their endless shape-shifting: walking around them, you find that even when you think you grasp a form and understand its sense, another side reveals an almost un-recognizably different artwork. The gesture is formal but also metaphorical: no sooner do you think you know or comprehend something than the work forces you to recognize how fragile and uncertain that knowledge is.
With You Have Did the Right Thing When You Put That Skylight In (whose title is taken from an Arthur Russell ballad), Fecteau slyly references the Kunsthalle Basel’s own space, reminding us that the artist’s fascination with architectural details and interiors sits at the center of the show. It is Fecteau’s largest exhibition to date and his first solo show in Switzerland, in which a selection of sculptures spanning from 2000 to the present accom-panies the premiere of a new body of work. Comprised of images culled from magazines and other readymade elements (shoeboxes, jewelry boxes, wicker baskets, and other lo-fi containers, all painted the matte-est of blacks), these wall sculptures are some of Fecteau’s first three-dimensional collages since he began making collage in the 1990s. They testify at once to a return to his origins and to a significant new direction.
Many of the magazine clippings used in these fifteen new wall pieces were first collected in the 1990s, when the artist’s interest in images of throw pillows was first aroused. Throw pillows—those side players of interior decor, often regarded as superficial, banal, or extraneous—are here imbued with a peculiar theatricality. As the artist himself notes, within an architectural space, pillows actually pose a sculptural question. The colorful pillows here have thus become sites for an investigation of space, depth, and how to mine the significance of the seemingly insignificant. As with so much of Fecteau’s work, difficulty arises as to how precisely to talk about these sculptures. One might see them in sculptural terms, as shallow collages that connect to and extend the artist’s two-decade-long inquiry into shape, color, and how pictures of architectural interiors could translate into three dimensions. Or, one could also see them as strangely libidinal miniature stage sets for an experi-mental, existential play in which throw pillows are the central protagonists. Either way, one can’t ignore how they celebrate both dinkiness and extravagant splendor, both a simple craft vernacular and palpable drama—exactly those seemingly untenable tensions that have been the hallmark of Fecteau’s work from the start.
Vincent Fecteau was born 1969 in Islip, USA;