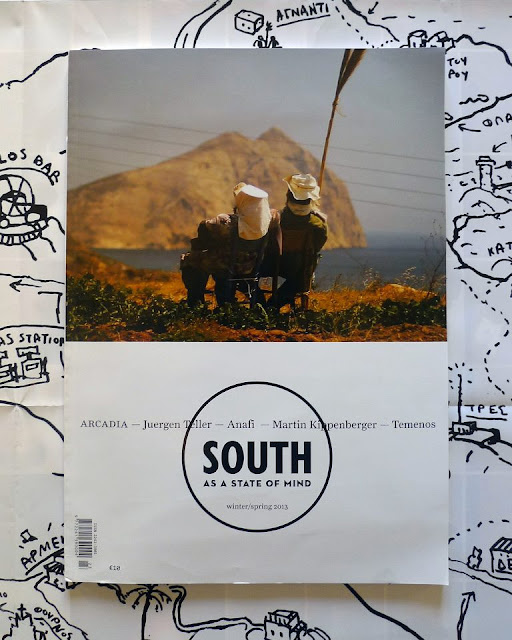 SOUTH as State of Mind grew up fast to become a bi-annual publication for contemporary arts
and culture, published by Epomenos Stathmos (Greece) and Phileleftheros Publishers
(Cyprus) and distributed internationally. A project by Kunsthalle Athena, it is founded by curator
and writer Marina Fokidis, while it is designed by creative director Yannis Karlopoulos.
SOUTH as a State of Mind’s new issue is now out to breathe some summer into this winter.
Almost one year old and very happy with our new parents-publishers, we are injecting, once more,
our southern shots, within the turbulent context of world crisis.
This time, the main focus is the notion of Arcadia, a mythical state of mind and the possibility of
contentment found in remoteness. A bunch of important artists and writers contributed their
accounts of ‘idyllic places’, ‘sensual and intellectual pleasures’ and ‘carefree tranquillity’, or
something of this sort, as it is translated within the contemporary culture context.
Yorgos Tzirtzilakis opened the door to The Soul of the Green Beast (a.k.a. arcadia). Juergen
Teller found his own arcadia in Hydra and produced a mind-blowing series of photographs
exclusively for the magazine. Agustin Pérez Rubio shared some thoughts on Fourier and his
phalansteries - thoughts that he wrote while on the island of Lefkada. Johan Grimonprez
combined together a text on falling fish and a version of his WeTube-o-theque on Radical Ecology,
and sent it to us from Syros, the island where he spends half of his year. María Inés Rodríguez
and Juan Andrés Gaitán got married on the island of Milos and allowed us to use a picture of
their ‘golden’ wedding. Both Filipa Ramos and Rodrigo Mallea-Lira explained how arcadia could
be found in the rigid convention of art institutions. Adnan Yildiz set up an interview between the
past and future prompted by a poster that did not allow internet beyond a certain point and Pola
Bousiou shared an essay on the contemporary nomads of the island of Mykonos.

Maybe our arcadia, for now, was a tiny dry Aegean island surrounded by the most seductive sea.
SOUTH team went to work on the construction of arcadia on the island of Anafi - a place that
every year replenishes our desire to continue, no matter what. Annika Larsson’s film on rituals,
Miltos Manetas’s visual works on ‘overeality’, Andreas Angelidakis’s tour around the colony of
free camping on the beach, Christina Dimitriadis's night shots of the holly monastery built on top
of the second highest monolithic rock in the Mediterranean, Dimitris Politakis's sunstroke-style
outlook of the movie Summer Lovers (1982) and Don DeLillo's novel The Names (1982) both set
on Greek islands, the music which the music composer and solist Augustin Maurs wrote on Anafi
to Save Europe, are some of the responses suggesting the dynamic climate of creative lethargy
within the Anafi Summit.
We drew from the ‘tradition’ of Martin Kippenberger, as well as other artists from all over. The
Tradition column is dedicated to Martin Kippenberger’s MOMAS, a forgotten Museum of Modern
Art on Syros, a concrete-skeleton ruin. Helmut Middendorf shares his visual record of it, while
Katerina Gregos and Maria Papadimitriou share their words. The Trickster, for this issue, is the
artist Thanassis Totsikas who resides and works remotely in a forest in cental Greece. Christoforos
Marinos writes about his work, while Helena Papadopoulos steals some of his words for an
interview. For the Mysticism column, the Phoenikz Boyz create an unexpected version of zodiac
signs, based on real or fictional historical records as found or not found on Anafi, while in
Architecture / Landscape column, Petunia Exacoustou discusses the pioneering work of
communication theorist and architect Mit Mitropoulos, which is about minimal design constructions
for remote coastal sites on Aegean islands. This time, Shout / Politics column hosts an
exploration of the community of political exiles on Anafi by Margaret E. Kenna, while the second
round of Domino by Florence Derieux continues with Mikhail Bakunin Leaving France and his
infamous text on Anarchy.
As it was obvious, we paid tribute to Gregory Markopoulos’s Temenos project, an ecstatic
experience that made arcadia a bit more palpable, as it is even set in an area of the Peloponnese
called Arcadia. For our Flying Rumours (Film) column, Constantinos Hadzinikolaou covers
Temenos 2012, the screenings of ENIAIOS, Gregory J. Markopoulos’s opus. Venia Vergou revisits
The Idlers of the Fertile Valley, a film by Nikos Panayotopoulos (1978). Ana Teixeira Pinto writes a
comparative overview of the most influential biennials of last summer, such as the Berlin Biennale,
documenta 13 and Manifesta 9, while Luiza Proença and Fernando Oliva write reviews about São
Paulo Biennial and Bienal Naïfs do Brasil 2012 featured in Flying Rumours (Visual Arts) column.
Last but not least, Paolo Colombo makes us feel the Shame of a guilty bliss coming to an end in
the homonymous, final column.