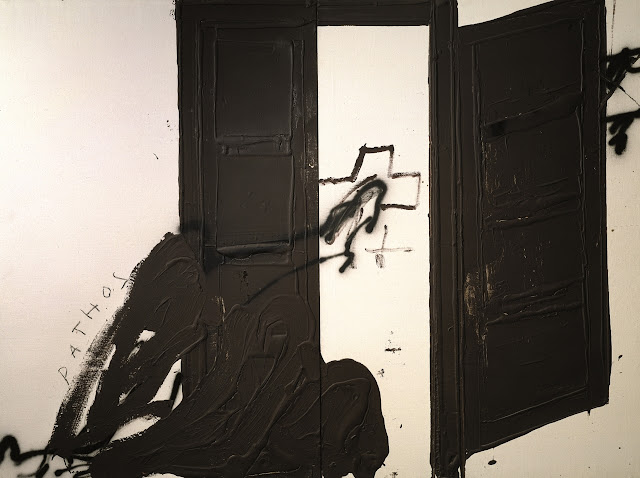 Antoni Tàpies was born in Barcelona in 1923 into a cultured, middle-class, Catalan nationalist family who, since the 19th century, had been part of a publishing and book-selling tradition that awoke in him an early love of books and reading.

That inclination was strengthened over a long convalescence from a lung disease, during which he began his first experiments with art. He spent an increasing amount of time on drawing and painting and ended up abandoning his law studies to devote himself to them fully. By the forties he was already exhibiting his works, which were outstanding on the art scene of the time.

Tàpies shared a general sensibility which affected artists on both sides of the Atlantic after the Second World War and the dropping of the atomic bomb, and soon expressed an interest in matter - earth, dust, atoms and particles - which took the shape of the use of materials foreign to academic artistic expression and experiments with new techniques. The matter paintings make up a substantial part of his work and are a project he is still engaged in today. He believes that the notion of matter must also be understood from the point of view of Mediaeval mysticism as magic, mimesis and alchemy. That is how we must see his wish for his works to have the power to transform our inner selves.

In the fifties and sixties Tàpies created a series of images, usually taken from his immediate environment, which would appear in the different stages of his evolution. Often, as well as being represented in different ways, a single image will have a series of differentiated meanings superimposed on one another. His message focuses on the revaluation of what is regarded as low, repulsive material (it is not by chance that he often chooses subjects traditionally held to be disagreeable or fetishist, such as a defecating anus, a discarded shoe, an armpit or a foot).

Moreover, Tàpies’ work has always absorbed the political and social events of the time. In the late sixties and early seventies his political commitment in opposition to the dictatorship deepened and the works from that period have a marked character of denunciation and protest. Coinciding with the flowering of arte povera in Europe and post-minimalism in the United States, he worked more with objects, not showing them as they are but stamping them with his own seal and incorporating them into his language. In the early eighties, once democracy had returned to Spain, his interest in canvas as a support took on renewed strength. At that time he produced works with foam rubber or the spray technique, he used varnishes and created objects and sculptures in refractory clay or bronze, while remaining active in the field of graphic art. In the later years of the decade he seems to have a heightened interest in Eastern culture, a concern which had been incubating since the post-war years and which increasingly became a fundamental philosophical influence on his work because of its emphasis on what is material, the identity between man and nature and a rejection of the dualism of our society. He was also drawn by a new generation of scientists, who helped to provide a vision of the universe which understands matter as a whole in constant change and formation.

The works of the last years are, most of all, a reflection on pain - both physical and spiritual - understood as an integral part of life. Influenced by Buddhist thought, Tàpies believes that a better knowledge of pain allows us to soften its effects and therefore improve our quality of life. The passage of time, which has always been a constant in his work, now takes on fresh nuances when lived as a personal experience which brings greater self-knowledge and a clearer understanding of the world around him. In recent years he has consolidated an artistic language which visually conveys both his conception of art and certain philosophical concerns which have been renewed over the years. His artistic practice is still open to the brutality of the present while offering a form which, despite its ductility, remains faithful to its origins. And so the works of the last few years are not only fully contemporary, they are also a record of his own past.

Alongside his production of pictures and objects, since 1947 Tàpies has been active in the field of graphic work. He has produced a large number of collector’s books and dossiers in close association with poets and writers such as Alberti, Bonnefoy, Du Bouchet, Brodsky, Brossa, Daive, Dupin, Foix, Frémon, Gimferrer, Guillén, Jabès, Mestres Quadreny, Mitscherlich, Paz, Saramago, Takiguchi, Ullán, Valente and Zambrano.