Resurrect Dead : The Mystery of the Toynbee Tiles 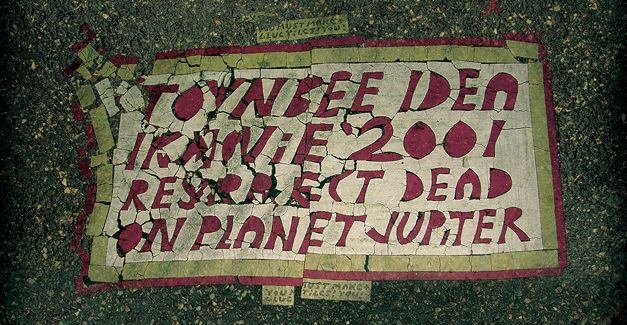 The Toynbee tiles (also called Toynbee plaques) are messages of mysterious origin found embedded in asphalt of streets in about two dozen major cities in the United States and four South American capitals. Since the 1980s, several hundred tiles have been discovered. They are generally about the size of an American license plate, but sometimes considerably larger. They contain some variation on the following inscription:
TOYNBEE IDEA
IN Kubrick's 2001
RESURRECT DEAD
ON PLANET JUPITER.
Some of the more elaborate tiles also feature cryptic political statements or exhort readers to create and install similar tiles of their own. The material used for making the tiles was long a mystery, but evidence has emerged that they may be primarily made of layers of linoleum and asphalt crack-filling compound.[citation needed]
Articles about the tiles began appearing in the mid-1990s, though references may have started to appear in the mid-1980s.
There is also a movie about it