What They Are Reading in Greece 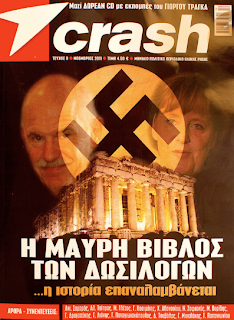 History of sovereign defaults tends to begin with Dionysius, the ruler of Syracuse in Greece during the fourth century B.C., who had an entertaining habit of stamping two-drachma mark on one-drachma coins to pay of his debts. Around the same time, thirteen Greek city states defaulted on their loans from the Temple of Delos — the first recorded default in history. In the modern era too, Greece never enjoyed sound finances; it defaulted at least five times (1826, 1843, 1860, 1894 and 1932), and the messiest default in 1826 shut it out of international capital markets for 53 years.
However, it’s a more recent nightmare that haunts the Greek psyche today — that of German domination. The country which suffered mightily under the Nazi rule seems to be invoking those painful memories this November as northern european countries demand austerity measures from their floundering government. A giant swastika looms over the Acropolis on the cover of fittingly-named Crash magazine. Horst Reichenbech, the German head of the European Task Force on Greece, has been portrayed as a Wehrmacht officer on the cover of another, and called a gauleiter, a Nazi term for a regional governor. On my last visit to Athens, a favored phrase there seems to be “The Germans are coming” a title of an influential post-war Greek film, where a former partisan often wakes up from his nightmares uttering just that.
Despite deep positive relations over the last five decades — which included the German government shielding political dissidents from the Greek junta — the Second World War casts a long and grim shadow over the Greek psyche. The German tabloid Bild’s pointed suggestion that the Greeks sell the islands and the Acropolis did not help assuage the rumors that German banks are waiting to liquidate the Greek state’s assets.
MORE
Tags News