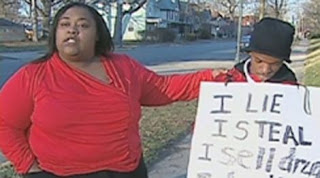 by CBS News
khou.com
(CBS) FT. WAYNE, Indiana -- An Indiana mother forced her son to wear a sign around his neck listing his law-breaking behavior and stand on a Ft. Wayne street corner for two hours earlier this week.

CBS New York reports that Dynesha Lax thought the punishment police had given her son when he broke the law recently wasn't strong enough to get him to stop his behavior, so she took matters into her own hands.

"He broke the law again today and they only gave him a few hours community service. So I decided that we're going to wear a sign," she said. "Since you're looking for attention, we're going to get you attention."

CBS Atlanta reports that some passing drivers evidently thought Lax was breaking the law and called police. But officers said Lax is completely within her rights to make her son stand on the side of the street. It is not illegal.

"I'm hoping that having him out here is going to make it sink in. It wasn't for it to be a joke or anything funny. He just had to stand out here two hours and suddenly it blew up. Then again they've got their way of parenting and I've got mine. My object is to save my son," said Lax.
Tags News