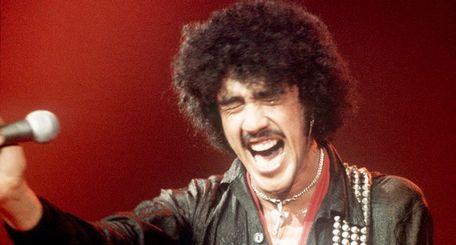 A treasure trove of tapes stashed away by Thin Lizzy frontman Phil Lynott will be released as a boxed set later this year.
Twenty six years after the Dublin rocker's death at the age of 36, more of his lost music will be heard by the public for the first time in June.
Shortly before he passed away in 1986, Mr Lynott gave 150 tapes to a third party for safekeeping. The cache of up to 700 songs has finally been released to record company Universal Music.
"This is an absolutely stunning find," Steve Hammonds, project manager behind the new Thin Lizzy box set, told the Irish Independent.
"In every group there's a member who lovingly collects their recordings and in Thin Lizzy that was Phil Lynott, because Lizzy was his baby and his band."
It will be the second boxed set in recent times to feature archive work by the band, following last year's 'Live At The BBC' release.
But the newly unearthed recordings stretch from Thin Lizzy's years with Decca Records, beginning in 1971, to their 'Renegade' album in 1981.
"There are out-takes, unheard versions of Thin Lizzy hits and, most exciting of all, material which was recorded but never released at the time," said Mr Hammonds.
"Phil Lynott was such a prolific songwriter. He recorded 12 Thin Lizzy albums, two solo albums, along with his Grand Slam post-Lizzy project, and now we find he had even more songs in his drawer."
However, Thin Lizzy members Scott Gorham and Brian Downey will have the "final say" over which songs are released.
"The members of Thin Lizzy are fully involved with this project. We have been sending them tapes of what we've found and respecting their wishes as regards the material being issued and the art work," added Mr Hammonds.
Label bosses have declined to give more details on why the material is only surfacing now, 30 years after Thin Lizzy split.
"Phil Lynott passed the material on to a third party for safekeeping. They held on to it for decades because they were waiting for the right people to come along.
"They really didn't trust anyone enough to release it properly. The catalyst was a boxed set of Thin Lizzy BBC sessions we issued earlier this year, which made them believe we were the right people. No money has changed hands, this person is a Thin Lizzy fan."
Meanwhile, RTE will mark the anniversary of Mr Lynott's death on January 4 with a new documentary 'The Philip Lynott Archive' to be broadcast tonight and which will feature the first screening of a fully restored version of the 1982 'Old Town' video.
And the annual 'Vibe for Philo' gig in Mr Lynott's memory takes place at Dublin's Button Factory on Wednesday.
-via belfasttelegraph.co.uk

Thin Lizzy - Behind The Music [VH1]