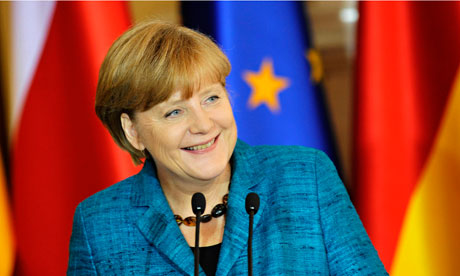 German chancellor Angela Merkel. Photograph: Alik Keplicz/AP
The Germans are not amused these days. Look everywhere from tabloids to the blogosphere, and it seems that the public mood has reached boiling point. Loth to shoulder another national debt increase and finance another bailout, the Germans have started questioning everything from the wisdom of supporting Greece to the common euro currency, or indeed the merits of the European integration project altogether. This might be strange for a country that is nudging ever closer to full employment, and which is about to recapture its position as the world's leading exporter of manufactured goods from the Chinese. But the Germans say they've had enough: no more underwriting of European integration, no more paying for this and that, and certainly no more bailing out the Greeks.

What is truly strange, however, is the brevity of Germany's collective memory. For during much of the 20th century, the situation was radically different: after the first world war and again after the second world war, Germany was the world's largest debtor, and in both cases owed its economic recovery to large-scale debt relief.
Germany's interwar debt crisis started almost exactly 80 years ago, in the last days of June 1931. What had triggered it was Germany's aggressive borrowing in the late 1920s to pay reparations out of credit. A credit bubble resulted, and when it burst in 1931, it brought down reparations, the gold standard and, not least, Weimar democracy.
Having footed the resulting massive bill, after the second world war the Americans imposed the London debt agreement of 1953 on their allies, an exercise in debt forgiveness to Germany on the most generous terms. West Germany's economic miracle, the stability of the deutschmark and the favourable state of its public finances were all owed to this massive haircut. But it put Germany's creditors at a disadvantage, leaving it to them to cope with the financial aftermath of the German occupation.
Indeed, the London debt agreement deferred settlement of the reparations question – including the repayment of war debts and contributions imposed by Germany during the war – to a conference to be held after unification. This conference never took place: since 1990, the Germans have steadfastly refused to reopen this can of worms. Such compensation as has been paid, mostly to forced workers, was channelled through NGOs to avoid creating precedents. Only one country has challenged this openly and tried to obtain compensation in court: Greece.
It may or may not have been wise to put the issue of reparations and other unsettled claims on Germany to rest after 1990. Back then, the Germans argued that any plausible bill would exceed the country's resources, and that continued financial co-operation in Europe instead would be infinitely more preferable. They may have had a point. But now is the time for Germany to deliver on the promise, act wisely and keep the bull away from the china shop.
-via guardian.co.uk
Tags News