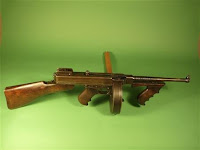 KANSAS CITY, Mo (Reuters) - Two guns believed seized from gangsters Bonnie and Clyde in 1933 after a deadly Missouri shootout with police sold for a combined $210,000 at an auction on Saturday in Kansas City to an unnamed online bidder.
The bidder paid $130,000 for a .45-caliber Thompson submachine gun, known as a "Tommy gun" in gangster slang. The same bidder paid $80,000 for an 1897 12-gauge Winchester shotgun.
"We're happy," said auctioneer Robert Mayo, owner of Mayo Auction & Realty, which held the auction attended by more than 100 people. As for the bid prices, Mayo said, "Nothing ever surprises me."
Mayo had not put an estimated value on the guns but said pre-auction online bids had reached $35,000 for the Tommy gun. Three weeks ago, a Missouri gun dealer who once sold a pistol owned by 19th-century outlaw Frank James predicted the Tommy gun would bring at least $25,000. 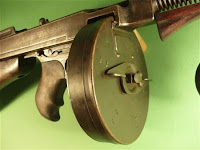 The guns were seized after a police shootout with Bonnie Parker and Clyde Barrow in Joplin, Missouri, on April 13, 1933. Police raided an apartment where the couple was hiding out. Bonnie and Clyde escaped, but two officers died in the shootout.
A police officer later gave the weapons to Mark Lairmore, a Tulsa police officer, and they remained in the Lairmore family, according to a Mayo account of the guns' history.

A great-grandson of Lairmore, also named Mark Lairmore, said the family no longer saw a need for the guns, which had been in a police museum in Springfield, Missouri, from 1973 until late last year.
Several people bid in person on the guns on Saturday, including Michael Brown, who said he was representing a group that wanted the guns for a gangster museum planned in Las Vegas. He bid nearly as much as the winning bidder on each gun and said he especially wanted the Tommy gun.
"There are very few guns with the historic value of that one," Brown said as he left the building to catch a plane back to Las Vegas. Brown said he hadn't planned to bid on the second gun but did so after losing out on the Tommy gun. He said he was surprised the second gun went so high.
Mayo talked up the Tommy gun during the bidding as a "unique opportunity to own a piece of history" and he predicted the weapons would sell for much more in the years ahead.
Bonnie and Clyde history buff John Mahoney of Overland Park, Kansas, said he couldn't resist attending the auction, though he said he had no plans to make a bid.
"Curiosity got the best of me," Mahoney said. "I'd love to own one, but they are out of my price range."
(Reporting By Kevin Murphy; Editing by Mary Wisniewski and Cynthia Johnston)
Tags News
Newer Post Older Post Home