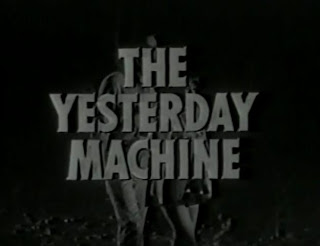 Description of The Yesterday Machine via The Classic Sci-Fi blogspot:

Quick Plot Synopsis
Margie, a college baton twirler, practice her moves while her boyfriend, Howie tries to fix a balking fuel pump. It’s getting late, so he gives up and they walk through a woods to get help. They encounter two civil war soldiers who shoot Howie. Margie is unaccounted for. Howie’s wound and Margie’s disappearance has the local police and a reporter asking questions. The bullet in Howie, and a cap found at the scene were authentic civil war items. This causes Lt. Partane to recall an odd experience in WWII where old men prisoners were, by the records, actually young men. The camp’s Kommandant was a rogue physicist, but was never found. While reporter Jim and Margie’s sister Sandy explore the scene, they are transported to Dr. von Hauser’s underground lab. Sandy and Margie are reunited in a dungeon cell. Von Hauser lectures Jim, (at some great length) about his science. The two rehash the old arguments over Nazi machiavellianism, which gets Jim tossed into an adjacent cell. They try to talk Didyama, (a female minion from ancient Egypt) into helping them escape. One nazi guard enters the women’s cell with ill intent. Didyama stabs him in the back, but he chokes her to death before he dies. The women get out and let Jim out. In a showdown back in the lab, Jim shoots the other nazi guard and puts two bullets into the time machine before fleeing. Coming up through a secret hatch in a private graveyard, Jim, Sandy and Margie meet Lt. Partane and other policemen. They hear the time machine start up again. Partane goes down to the lab. Von Hauser shoots, but Partane hits von Hauser, who slumps into the time machine’s chair and fades out to some other time. Partane destroys the machine. He gives a speech about man not being ready for such technology. The End.
Why is this movie fun?
The plot unfolds with such unHollywood quirkiness, that it keeps viewer interest up. The story opens with a college coed twisting and twirling her baton to old style rock and roll. From the get-go, FY is different. Also, Jack Herman’s flamboyant acting as Nazi scientist Ernst von Hauser is entertaining.
Deeper Question—Overshadowed by its many shortcomings, YM still manages to raise an interesting question. What if time travel was done by villains? All the usual noble ethics of non-interference would be in the bin. Von Hauser wanted to give his favorite Führer a few more months so that superweapons under development could be finished. Von Hauser talks wistfully of a Reich that would continue more than a thousand years. Why not? With his time machine, the regime could enact as many do-overs as necessary. But, what if TWO powers had time travel? Who’s mucking would prevail?
Science Lecture—Often enough, the villain monologues to the hero for no logical reason other than the scriptwriter’s need for some exposition. Von Hauser gives Jim an extended science lecture in front of a chalk board, to explain time travel to him. The briefer version runs like this: if you speed up light so it goes faster than the (um) Speed of Light, it begins to move backwards in time. The more you speed it up, the more quickly backwards time travels. Just how von Hauser does this with some surplus radio parts is not explained.
Tags DLRS TV
Newer Post Older Post Home