The 76-year-old woman visited a gastrointestinal specialist for stomach-related problems, including weight loss and diarrhea 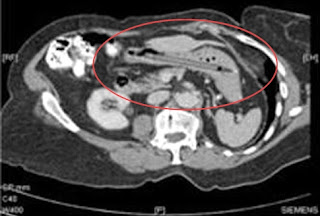 A bizarre doctor’s visit turned up a 25-year-old pen in the pit of an elderly woman’s stomach – and when it removed, it was still usable.
The 76-year-old woman, whose story was reported in the British Medical Journal Case Reports, was seeing a gastrointestinal specialist for stomach-related problems, including weight loss and diarrhea.


She was diagnosed with severe diverticulosis, but it wasn’t until after her diagnosis that her doctor noticed “a linear foreign body” in an X-ray of her stomach.
Upon questioning, the patient remembered she had once accidentally swallowed a black felt-tip pen.


She was using the pen to poke her tonsils, examining them with a handheld mirror as she stood on stairs, a report from gastroenterologist Dr. Oliver Walters explained. While doing this, she lost her balance and stumbled down a couple steps, swallowing the pen in the process. At the time, X-rays didn’t show any evidence of the object in her stomach, and the issue was forgotten.

The lost pen wasn’t to blame for the woman’s digestive problems, but doctors decided to remove it anyway, citing a case of a child who also accidentally swallowed a pen, which then tore through his bowel.
Remarkably, the pen had caused no damage to the woman’s gastrointestinal tract, and still had ink and could write when it was removed.
Doctors should listen carefully to patients, no matter how wacky their stories are, said the report.
“This highlights that plain abdominal X-rays may not identify ingested plastic objects and occasionally it may be worth believing the patient’s account however unlikely it may be,” the report concluded.
Read more: http://www.nydailynews.com/life-style/health/swallowed-pen-removed-25-years-usable-article-1.994223#ixzz1h69LF9Ox
Tags Daily Collection
Newer Post Older Post Home